There are 2969 named mountains in Washington. The highest and the most prominent mountain is Mount Rainier.

Washington is home to over sixty named mountain ranges, two of which dominate the landscape: the Olympic Mountains and the Cascade Mountains. There are 3 areas designated as national parks in Washington: North Cascades National Park, Mount Rainier National Park, and Olympic National Park. 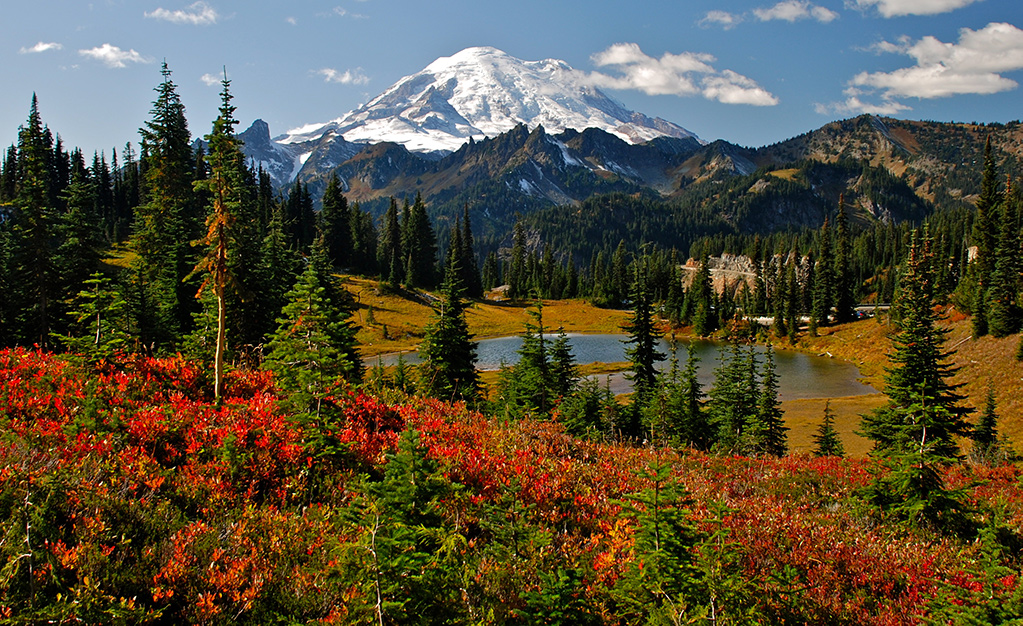 The North Cascades are often referred to as the ‘Alps of the United States,’ because the rugged landscape resembles the Swiss Alps. Arguably one of the most scenic and geologically complex mountain ranges, the North Cascade Range is home to noteworthy mountains like Mount Baker, Glacier Peak, and Mount Shuksan, as well as Washington’s famed National Park, North Cascades National Park.

The South Cascade Mountains are home to three volcanoes – Mount Rainier, Mount St. Helens, and Mount Adams. Mount Rainier, in particular, is Washington’s tallest peak and the highest peak in the Cascade Range.

Mount Rainier boasts the largest glacial system in the lower 48 states, with more than 25 glaciers descending the slopes. The area was designated as a Mount Rainier National Park in 1899, becoming the fifth national park in the United States, preserving 236,381 acres including the entire mountain and 123 smaller peaks.

Throughout the Cascade Range, visitors can expect incredible alpine views, hundreds of miles of hiking trails, dense forests, accessible campgrounds, and climbing routes. However, those interested in experiencing the Cascade Range by vehicle can also drive approximately 440 miles on the Washington Cascade loop which passes through a variety of Washington’s top outdoor attractions.

Washington’s second most popular mountains, the Olympic Mountains, are located on the Olympic Peninsula in Western Washington and are primarily protected by Olympic National Park. Unlike the Cascade Range, the peaks found in the Olympic Mountains are not exceptionally large – the highest is Mt. Olympus at 7,962 ft. However, there are several popular hiking trails which include: Mount Storm King, Hurricane Ridge, and Mount Washington.

Mt. Rainier is the highest mountain at the Cascade Range and tallest in Washington. However, within Mount Rainier National Park there are over 260 miles of maintained hiking trails to enjoy. There are thousands of attempts to hike to the peak of Mt. Rainier each year, but only half succeed due to weather and lack of preparation. At an elevation of 14,411 ft, Mt. Rainier is one of only two fourteeners in Washington, so if you’re looking to hike to the top, you’ll need adequate experience and supplies.

Mount Si (4,167 ft.) is hiked by nearly 100,000 people each year. Its popular due to its proximity to Seattle and is considered to be an achievable hike by both experienced and novice hikers. Ascending Mount Si takes little more than a few hours and includes a rock scramble to the top.

Mount Baker (10,778 ft) is considered one of the most dominant features in the North Cascades. There are several hiking trails in and around Mt. Baker that offer incredible views of its summit. In the Mt. Baker-Snoqualmie National Forest, you can find over 1,500 miles of hiking trails at varying distances.

North Cascades National Park is another popular location for hiking, backpacking, camping, and climbing. Within the North Cascades, you’ll find over 2.5 million acres of pristine wilderness. Some of the more popular hiking routes include Hannegan Peak, a 5.2-mile trail with views of the Cascade Range and Mt. Baker, and Bandera Mountain, a 3.5-mile trail that climbs to the top of Bandera Mountain with sweeping views of alpine meadows and lakes.

Seattle is the perfect place to stay if you’re interested in traveling to popular wilderness areas and mountains in Washington. Within a three-hour drive of the state’s most famous mountain ranges, North Cascades, Olympic, Mount Rainier, and Mount Baker, Seattle is considered a convenient starting point for travelers interested in getting the most out of their stay in Washington state.

Seattle is the largest city in the Pacific Northwest region of North America and the state of Washington. The city lies alongside the Pacific Ocean and is known for its cloudy weather and mild temperatures. It has an international airport, Seattle-Tacoma International, and a variety of hotel accommodations, which makes it a great starting point for tourists that are traveling throughout the state.

Holder of the world snowfall record (slightly less than 95f/29meters of snow in a year) Washington is a winter-sports paradise. Large amounts of natural won't disappoint snow enthusiast of any skill level. Conveniently, there are many ski resorts within a couple of hours from Seattle.