Covering some 550 miles (885km) of land in Georgia, Tennessee, South Carolina, North Carolina, Virginia, West Virginia, and Maryland, the Blue Ridge Mountains are one of the Appalachian Mountains’ major subranges.

Interestingly, the Blue Ridge Mountains are home to some of the highest peaks in the eastern part of North America, with the exception of those found in Baffin Island in the Canadian territory of Nunavut.

In fact, many of the mountains in the Blue Ridge rise above 6,000 feet (1,828m), including Mount Mitchell, Clingman’s Dome, Mount Guyot, Roan High Knob, Richland Balsam, Waterrock Knob, and Mount Kephart. Meanwhile, in the next highest part of the Appalachians - the White Mountains of New Hampshire - only Mount Washington crests the 6,000 foot (1,828m) mark.

The Blue Ridge Mountains are technically what’s known as a geologic or physiographic “province,” which means it’s a region with distinctive geomorphology (a.k.a features and landforms). These mountains are part of the greater Appalachian Mountains, which stretch from the state of Alabama all the way to the province of Newfoundland and Labrador in Canada.

Within the Blue Ridge Mountains, the bedrock is mostly highly metamorphosed rock that dates back to the Precambrian. Rocks such as gneisses, slates, quartzites, and schists are prevalent within the region, as are igneous intrusions.

Moreover, the Blue Ridge is actually a collection of smaller mountain ranges, including the Great Smoky Mountains and the Black Mountains. Within these ranges, the bedrock is rich in mineral resources, particularly feldspar, micas, and copper, much of which was mined over the course of the last two centuries.

The mountains themselves as we know them today formed about 1.1 billion to 250 million years ago throughout the course of the Grenville orogeny and later during the Alleghenian orogeny (a.k.a. Appalachian orogeny). This makes them among the oldest existing mountains in the world, much older than the relatively youthful Himalaya and Alps.

The Blue Ridge Mountains cover a massive swath of land, so its diversity of ecosystems and landscapes comes as no surprise. However, one of the most defining features of the range is its dense forest cover.

At lower elevations, the region is dominated by mixed oak forests, while spruce-fir forests abound above about 4,400 feet (1,350m). Toward the summits of some of the higher peaks in the Blue Ridge, red spruce, Fraser fri, and balsam fir all prevail.

According to the World Wildlife Fund, the Blue Ridge Mountains’ ecoregion is one of the most ecologically rich broadleaf forests in the world, with hundreds of species calling the area home. This biodiversity has also led the Blue Ridge to be home to an incredible amount of endemic wildlife and plant species, particularly when it comes to amphibians (especially salamanders), mammals, and birds.

In fact, even the blueness that the Blue Ridge Mountains are known for is a result of their dense forests. This blue effect that seems to emanate from the mountains is actually the product of hydrocarbon release from the trees into the atmosphere. When the light reacts with these hydrocarbons (mostly isoprene), it creates the characteristic blue haze that makes the region so famous.

The Blue Ridge Mountains had been known to European settlers since the earliest days of their arrival in North America. Over the years, the native peoples of the Blue Ridge were pushed or forced off their land through a series of “treaties,” wars, and legislative action.

This set the stage for the region to be settled extensively by Europeans and European-Americans. Over the years, the Blue Ridge Mountains became a unique cultural region within the United States, as well as an important place throughout US history.

Perhaps the most famous event to involve the Blue Ridge Mountains was the Battle of Gettysburg during the Civil War. Although the battle itself took place just north of the ridge in Pennsylvania, the Robert E. Lee’s Confederate Army used the mountains as a cover to screen their movements as they tried to invade the Union. Ultimately, they lost decisively at Gettysburg, which was a major turning point in the Civil War.

These days, the Blue Ridge Mountains are part of Appalachia, which is a distinct cultural region in the United States. The region’s economy was, for a long time, dominated by logging, coal mining, and agriculture, which led to the development of a rich cultural heritage of music and folklore that continues to this day.

With over 5,000 peaks, the Blue Ridge Mountains contain a seemingly endless set of possibilities when it comes to outdoor recreation. Here are some of the most popular places and destinations to check out:

Located in eastern Virginia, the narrow ridge of Shenandoah National Park is one of the most popular federally-protected regions in the United States thanks to its proximity to Washington, D.C. The park contains 93 named peaks, the highest and most prominent of which is Hawksbill (4,050ft/1,232m). Major peaks within Shenandoah include Old Rag, Stony Man, and Blackrock.

Shenandoah is home to a substantial amount of undeveloped land, with about 40% of the park considered to be wilderness. It has a long and difficult history, including a substantial period of segregation which officially ended in the early 1950s.

These days, the park is highly visited, thanks to its abundance of hiking and camping opportunities. The majority of the trails in Shenandoah start off of Skyline Drive, the main thoroughfare in the park. There are also plenty of places to backcountry camp within the park, in addition to Shenandoah’s major campgrounds.

The most highly visited national park in the United States, Great Smoky Mountains National Park is located in Tennessee and North Carolina. It contains dozens of peaks within the Great Smoky Mountains, the highest of which is Clingman’s Dome. Other notable peaks include Mount Guyot, Mount Le Conte, and Mount Buckley.

The park is one of the largest protected land areas in the eastern part of the United States. It is famous for its abundance of wildlife, dense forests, and beautiful waterfalls. Great Smoky Mountains National Park was also designated as a UNESCO World Heritage Site and an International Biosphere Reserve.

It is home to over 850 miles (1,370km) of hiking trails, including a section of the Appalachian Trail. Great Smoky Mountains National Park is also a great place to visit if you’re looking to fly fish in the park’s glistening lakes and streams.

Although they are two separate forests, George Washington and Jefferson National Forests have been jointly administered since 1995. Combined, they contain about 1,544 square miles (4,000 sq. km) of remote, undeveloped land, 217 square miles (564 sq. km) of which is designated wilderness.

Moreover, the Appalachian Trail runs through these combined forests, as do over 2,000 miles (3,000km) of other shorter trails.

Running nearly the entire length of the Tennessee/North Carolina border, Cherokee National Forest is a federally protected area mostly within the state of Tennessee. It is home to 156 named mountains, the highest of which is Haw Knob and the most prominent of which is Big Frog Mountain.

The forest is an important habitat for an abundance of wildlife, including many species of trout. It is a popular outdoor recreation destination, particularly for hikers, cross-country skiers, mountain bikers, and campers.

There are a number of trails within the park, including the John Muir Recreation Trail (not to be confused with the trail of a similar name in the Sierra Nevada) and the Appalachian Trail. Cherokee National Forest contains 11 official wilderness areas and was also the home of the 1996 Olympic whitewater events.

Featuring rushing whitewater rivers and waterfalls, tall peaks, and plentiful hardwood forests, Pisgah National Forest is a popular outdoor recreation area in western North Carolina. The forest contains 312 named mountains, the highest of which is Balsam Cone and the most prominent of which is Roan High Knob.

Pisgah was one of the first national forests to be established in the eastern United States, having been designated in 1916. It is often considered to be the birthplace of modern American forestry.

Nowadays, Pisgah is home to three official wilderness areas as well as an abundance of outdoor recreation opportunities. Mountain biking is particularly popular in the forest, with Farlow Gap being one of the most difficult trails in the region.

Nantahala National Forest is located in western North Carolina and is traversed by the mighty Nantahala River. It has 4 named mountains, the highest of which is Abbot Top and the most prominent of which is Panther Top.

The forest contains a large number of waterfalls, as well as three wilderness areas. Nantahala also contains a substantial number of trout streams, as well as the old-growth Joyce Kilmer Memorial Forest, which contains some 6,000 acres (2,428 ha) of virgin forest.

Although it is among the smallest of the forests in North Carolina, Nantahala is a popular outdoor recreation destination. It contains four long-distance trails, including the Appalachian Trail, Bartram Trail, Foothills Trail, and the Mountains-to-Sea Trail

Dry Falls, on the Cullasaja River

Here are some of the best places to stay before or after your trip into the Blue Ridge Mountains:

Washington, D.C. is the capital of the United States. It is located to the east of the northern section of the Blue Ridge Mountains. With over 700,000 residents, D.C. is larger than both Vermont and Wyoming in terms of population, though it is not a state.

The city is one of the most heavily visited places in the United States, with over 20 million annual tourists. D.C. is easy to get to by road, train, and air, making it an excellent place to start your journey to the Blue Ridge Mountains.

Richmond is the capital of the Commonwealth of Virginia and the state’s fourth largest city with over 200,000 residents. It is situated to the east of the Blue Ridge Mountains.

The city is a popular tourist destination, thanks to its storied history. It has a strong economy, which is driven by finance, law, and government agencies. A number of major highways cross through Richmond and the city is serviced by an international airport.

Knoxville is located in eastern Tennessee, near the state’s border with North Carolina. It is directly west of the Blue Ridge Mountains and is a great place to stay if you’re looking to be in the foothills of this large mountain range.

Knoxville is home to the University of Tennessee and it is one of the largest cities in Appalachia with over 180,000 residents. It is considered to be a gateway to Great Smoky Mountains National Park as it is well connected by road and air transit.

Greensboro is the third most populous city in the state of North Carolina with almost 270,00 residents. It is crossed by three major interstate highways, making it an important transportation center in the region.

The city has a number of universities and its economy is growing quickly. It also has an active arts community and is a cultural center of the region. Plus, Greensboro is just a short drive east of the Blue Ridge Mountains, making it a nice place to start your journey.

Nestled in the foothills of the southwestern Blue Ridge Mountains, Chattanooga is a bustling city with a busy tourism industry. It is a particularly popular destination among rock climbers in the south-eastern United States.

Chattanooga is a gateway city both for the Blue Ridge and for the Deep South as a number of major highways travel through the region. It also has a small regional airport with good connections to nearby international airports. 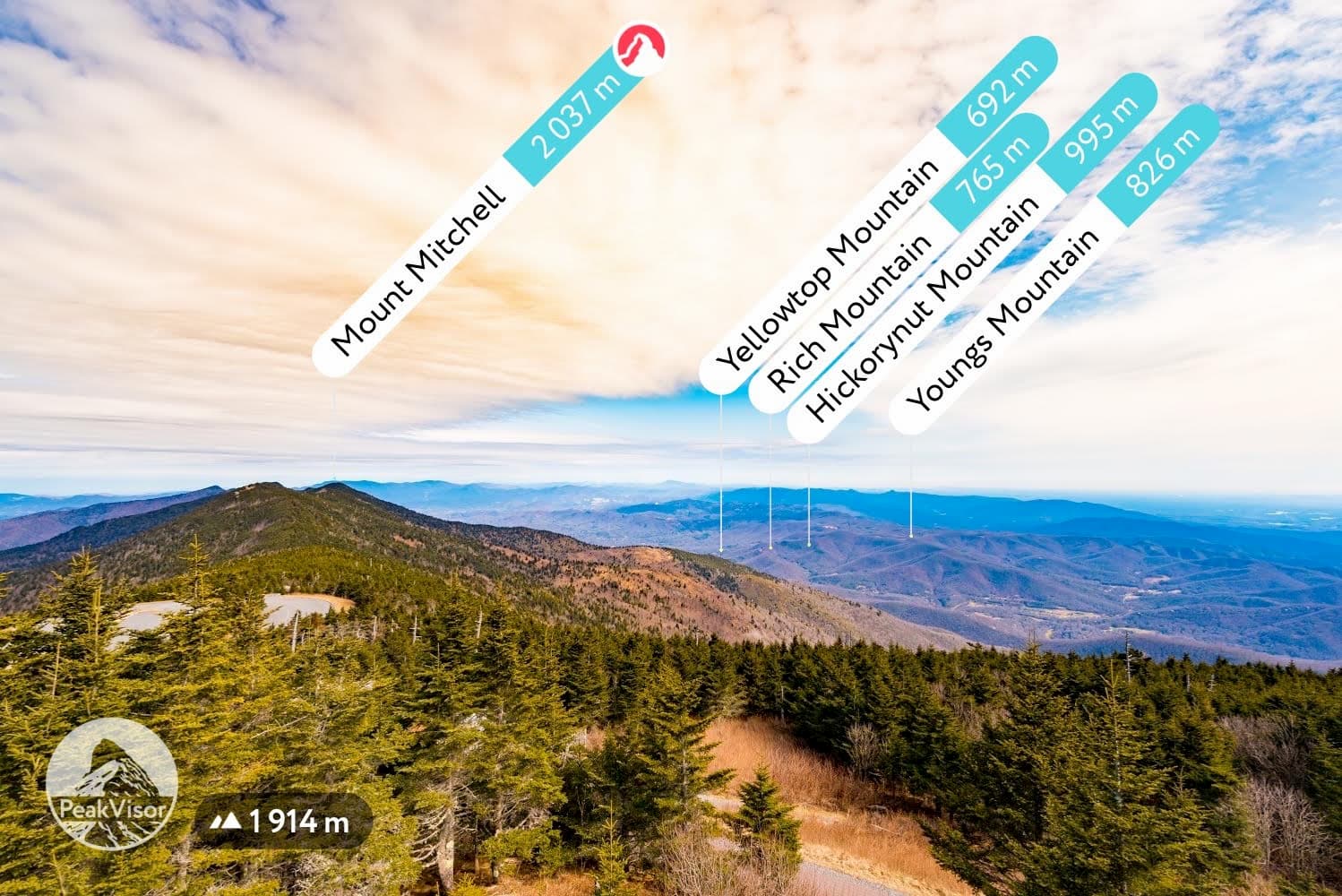 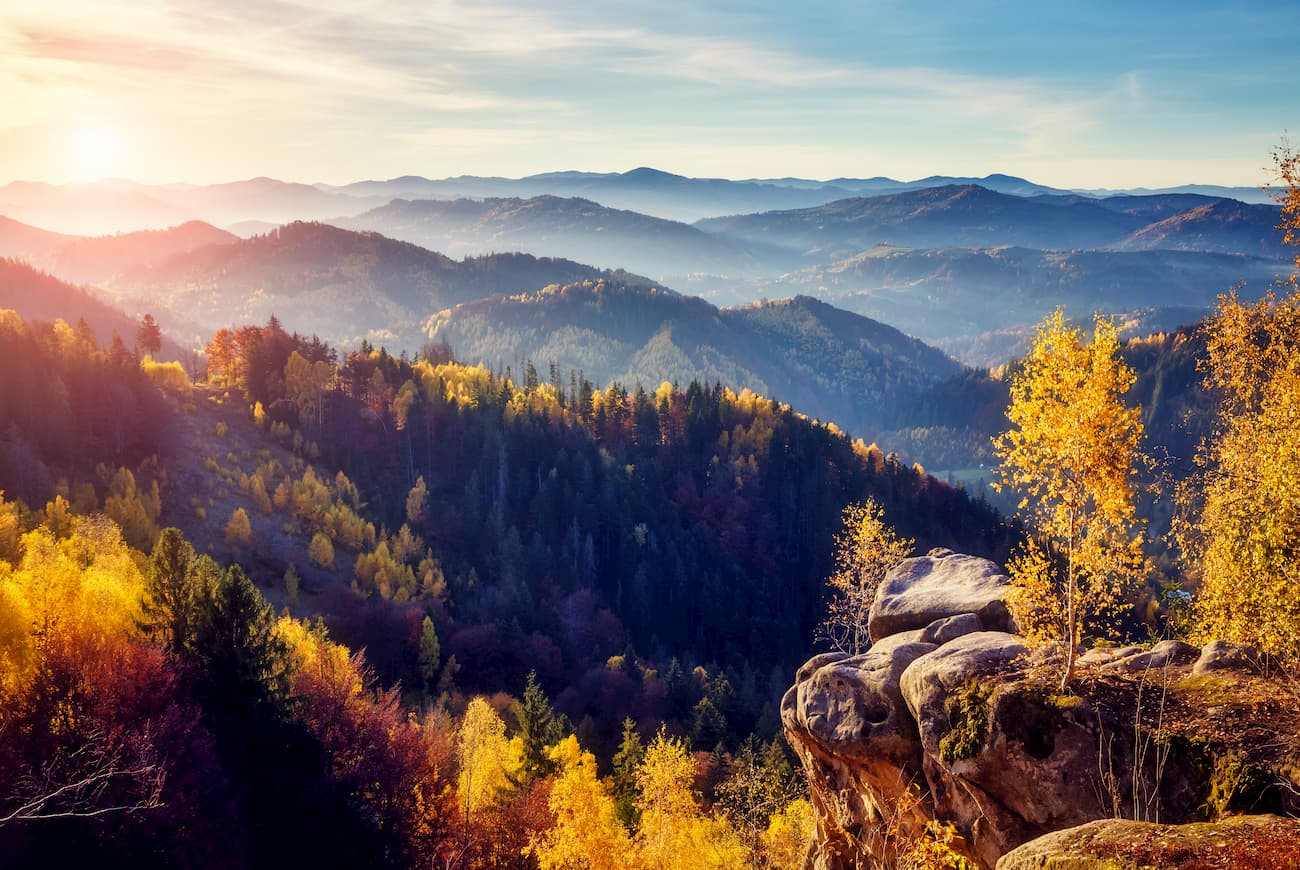 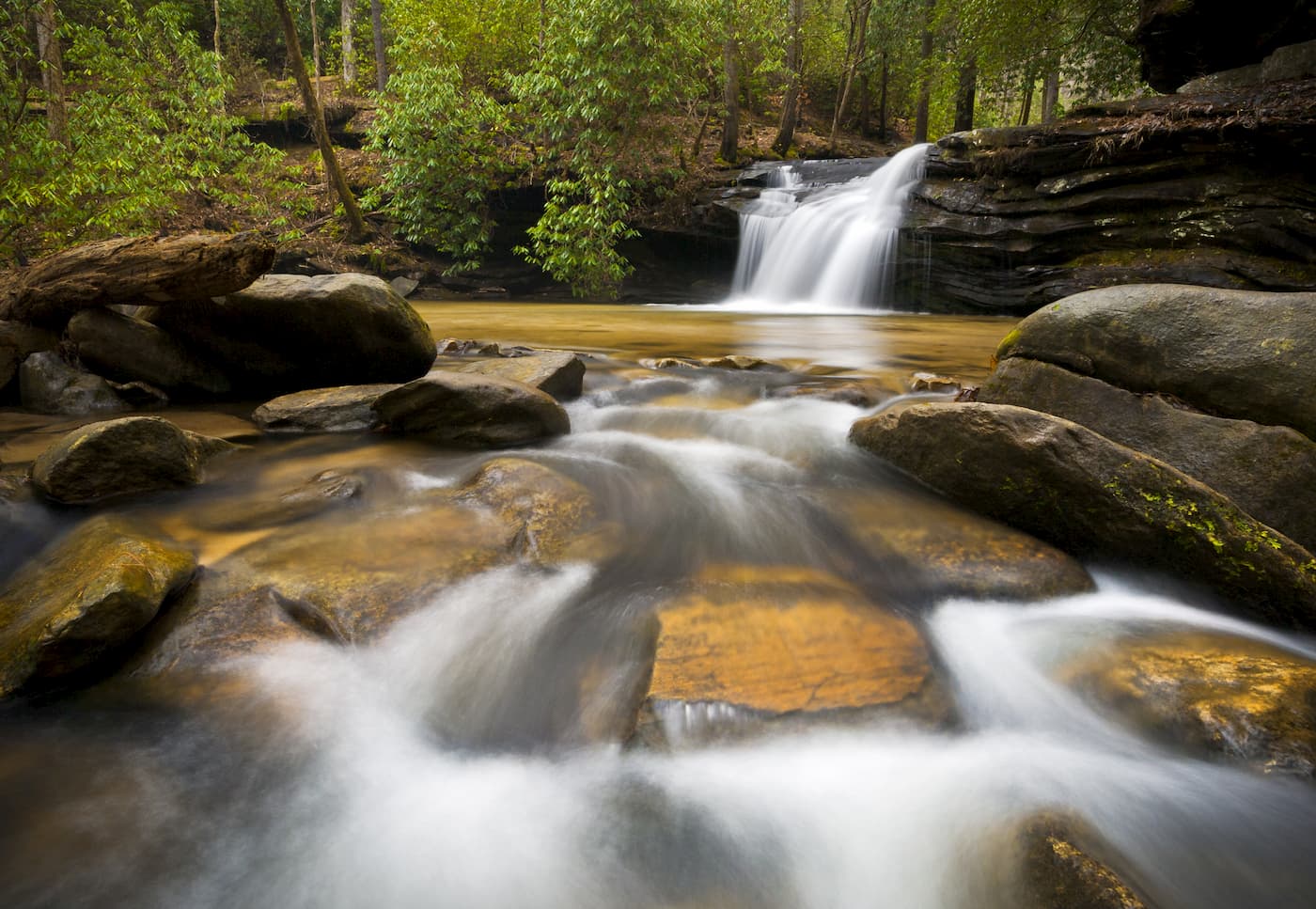 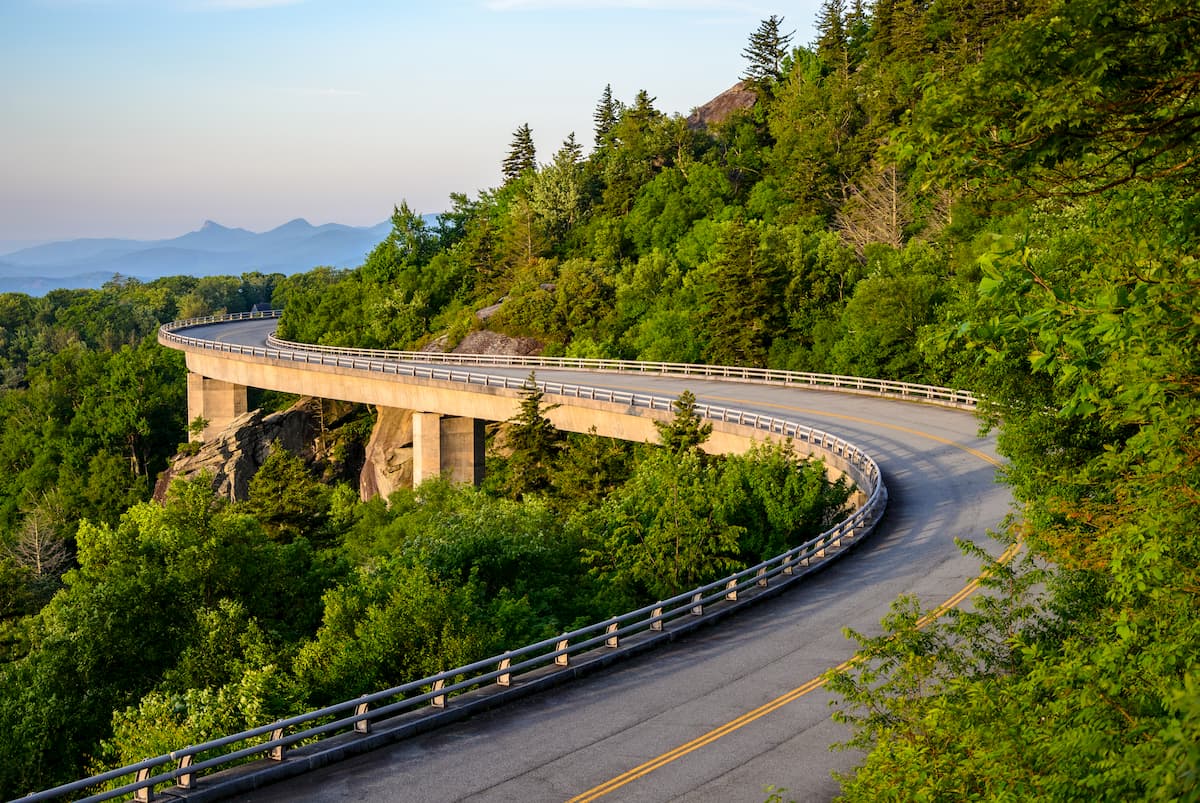 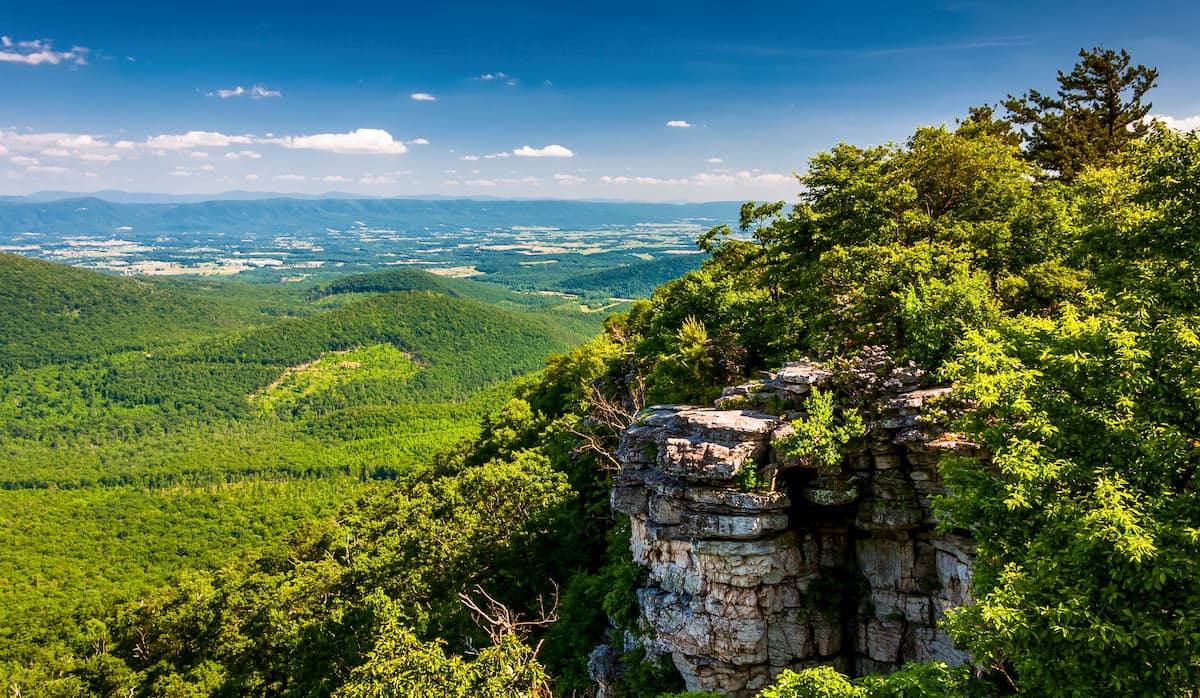 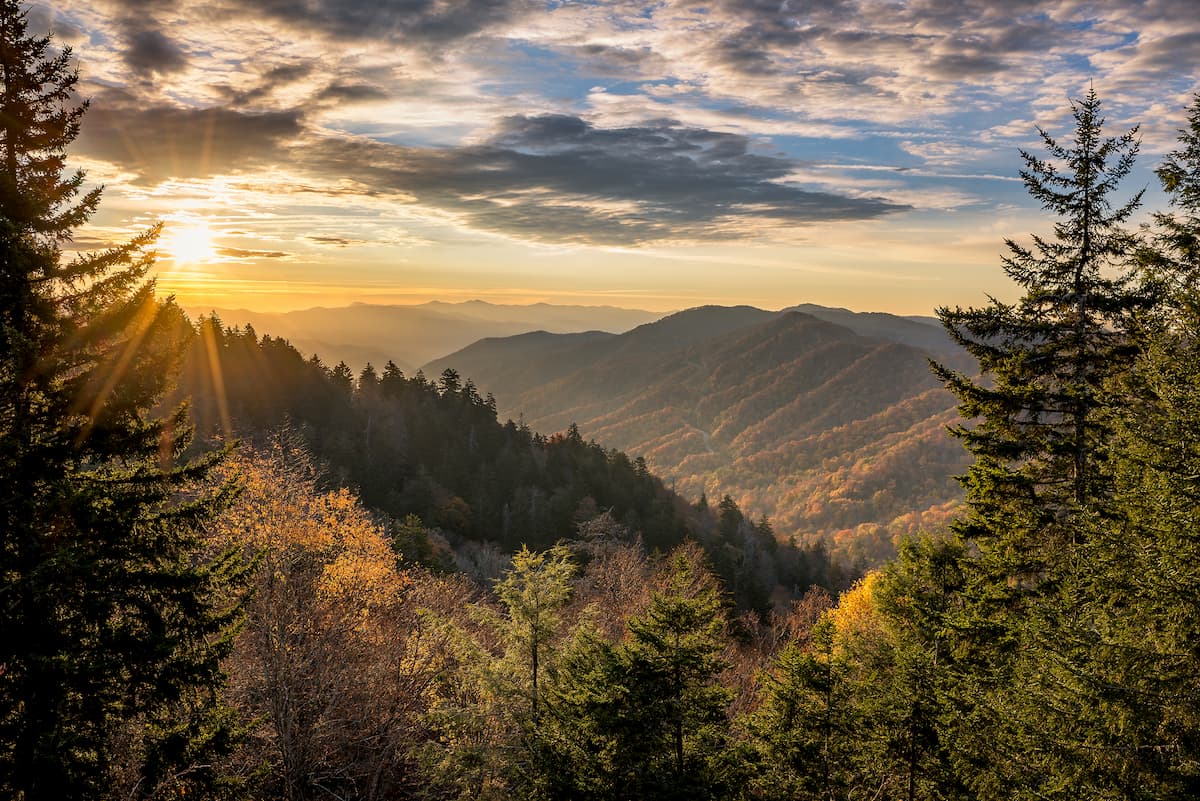 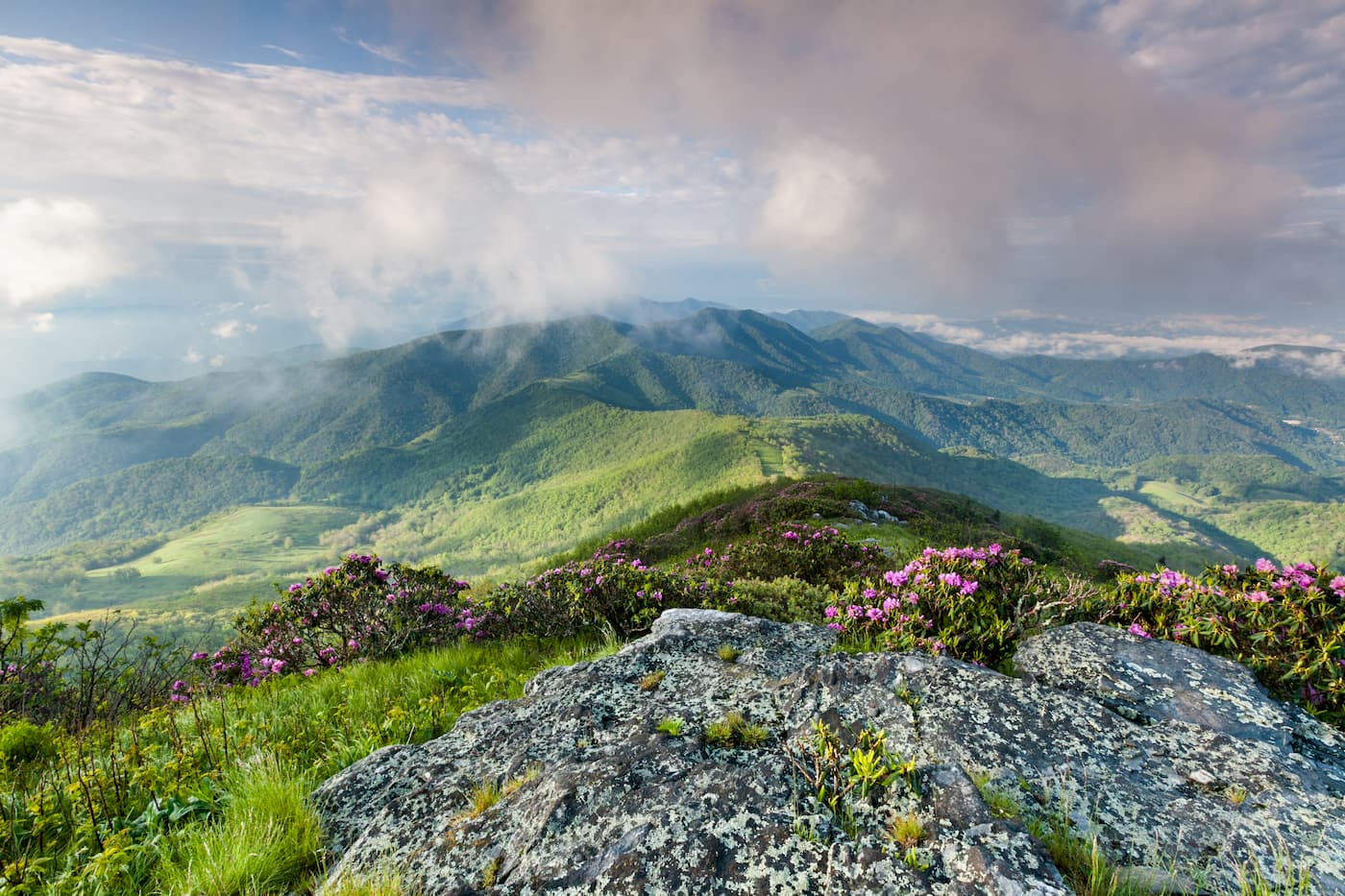