Dotingly referred to as “the Mountain State,” West Virginia is the only state that sits entirely in the Appalachian region, a cultural region in the Eastern United States that spans from the Southern Tier of New York to northern Alabama and Georgia. 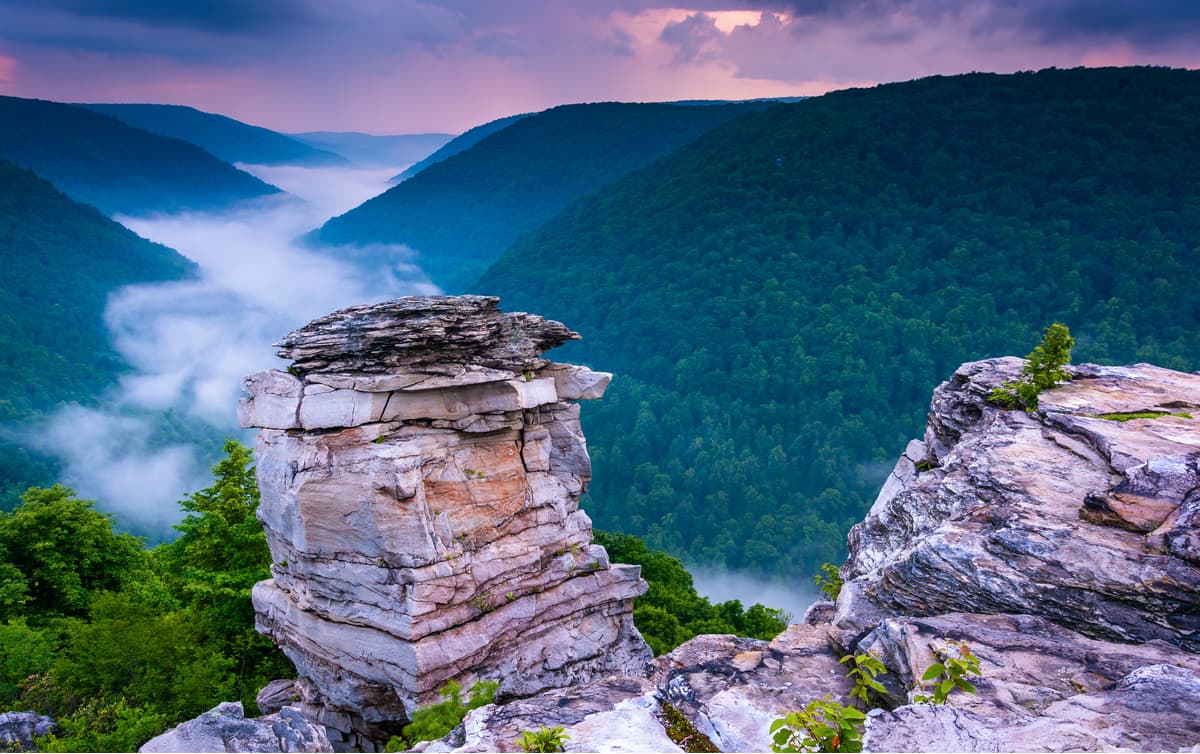 West Virginia contains over 1,000 named mountains and is almost entirely mountainous. In fact, more mountainous land exists per square mile in West Virginia than in any other state. It’s easy to see why the state motto, Montani Semper Liberi, translates to “Mountaineers are always free.”

Generally, the Mountain State’s 24,229.76 square miles are generally divided into two major physiographic provinces: the Appalachian (Allegheny) Plateau and the Valley and Ridge.

The Mid-Atlantic Ridge and Valley, home to the notorious Appalachian Mountain s, spans from western Maryland through the mountains of Virginia and eastern West Virginia. This region is heavily forested and contains several long, rugged ridges and deep valleys. Numerous peaks in this region rise to over 4,000 feet above sea level, including Spruce Knob, the highest point in West Virginia, Garden Mountain, Beartown Mountain, Kile Knob, and Elleber Knob.

The Allegheny Mountains, which lie west of the Blue Ridge in the Ridge and Valley region, house some of the most impressive summits in the state, including Cheat Mountain, Mount Porte Crayon, Thorny Benchmark, and the infamous Alleghany Mountain, a major mountain ridge that forms the eastern Continental Divide. This principal ridge of the Alleghany Mountain sits along the eastern edge of Pocahontas County and Greenbrier County, housing several impressive gaps and summits, including Hickory Knob, Smith Knob, High Top, Ryder Gap, Paddy Knob, and Bald Knob. The Alleghenies create a rain shadow, so the western part of the state tends to receive far more precipitation than the eastern panhandle.

The Appalachian (Allegheny) Plateau, a large dissected plateau that terminates at the Alleghany Mountain, covers the western two-thirds of the state, overlapping with the Ohio River drainage basin. This region is dissected by streams and contains mostly hills and valleys. The Allegheny Front forms the boundary between the Ridge and Valley Appalachians to the east and the Allegheny Plateau to the west.

Approximately 75% of West Virginia is covered in forest. In fact, the state’s three forests, Monongahela National Forest, George Washington National Forest, and Jefferson National Forest encompass just under a million acres of land. Six wilderness areas can also be found within Monongahela, and the 1,000-foot-deep New River Gorge is situated just south of the forest boundary. Needless to say, there’s plenty to explore in the Mountain State.

The New River Gorge National River is home to some of the country’s best whitewater rafting and arguably the best rock climbing on the east coast. Established in 1978, the New River Gorge National River sits within the Appalachian Mountains in southern West Virginia. The park contains over 72,808 acres of land along 53 miles and features an abundance of natural beauty. Popular trails include the Endless Wall Trail, the Long Point Trail, Bridge Trail and the Castle Rock Trail.

Tucked in the heart of the Alleghany Mountain, Monongahela protects more than 921,000 acres of wilderness within a 1.7-million-acre proclamation boundary. Monongahela is where peak baggers and avid hikers go to explore prominent West Virginia features like the Allegheny Front and the western portion of the Ridge and Valley Appalachians. The forest not only houses the highest summits in the state, but also contains more than 800 miles of trails, 75 tree species, and eight U.S. Wilderness Areas.

More than your average city, Harpers Ferry is a National Historic Park. In 1859, abolitionist John Brown raided the Armory during the American Civil War. This historic event, among others, took place in Harpers Ferry. This quaint, historic town sits just 66 miles from Washington DC along the Potomac and Shenandoah Rivers. History buffs will appreciate the town’s unique history and museums, while outdoor enthusiasts can spend their days rating, fishing, mountain biking, hiking, or canoeing.

West Virginia’s largest ski area, Snowshoe Mountain, is home to 257 acres of skiable terrain, 1500 vertical feet, and 60 trails spread over 11,000 acres in the Alleghany Mountain. The resort, which offers some of the best snow on the east coast, is tucked in the bowl-shaped convergence of Cheat Mountain and Back Allegheny. Visitors can opt to downhill or cross-country ski, snowboard, snowmobile, or just kick back in a hot tub at a local hotel or resort. The Village at Snowshoe sits close to the summit of the mountain, offering visitors easy access to a variety of amenities. 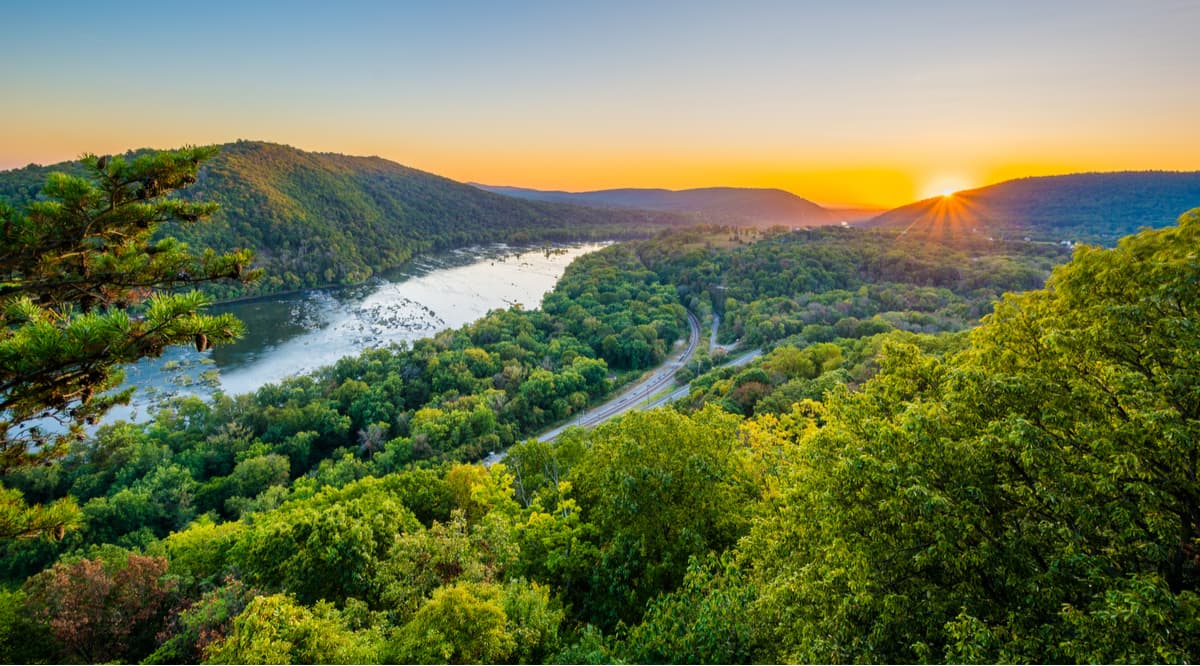 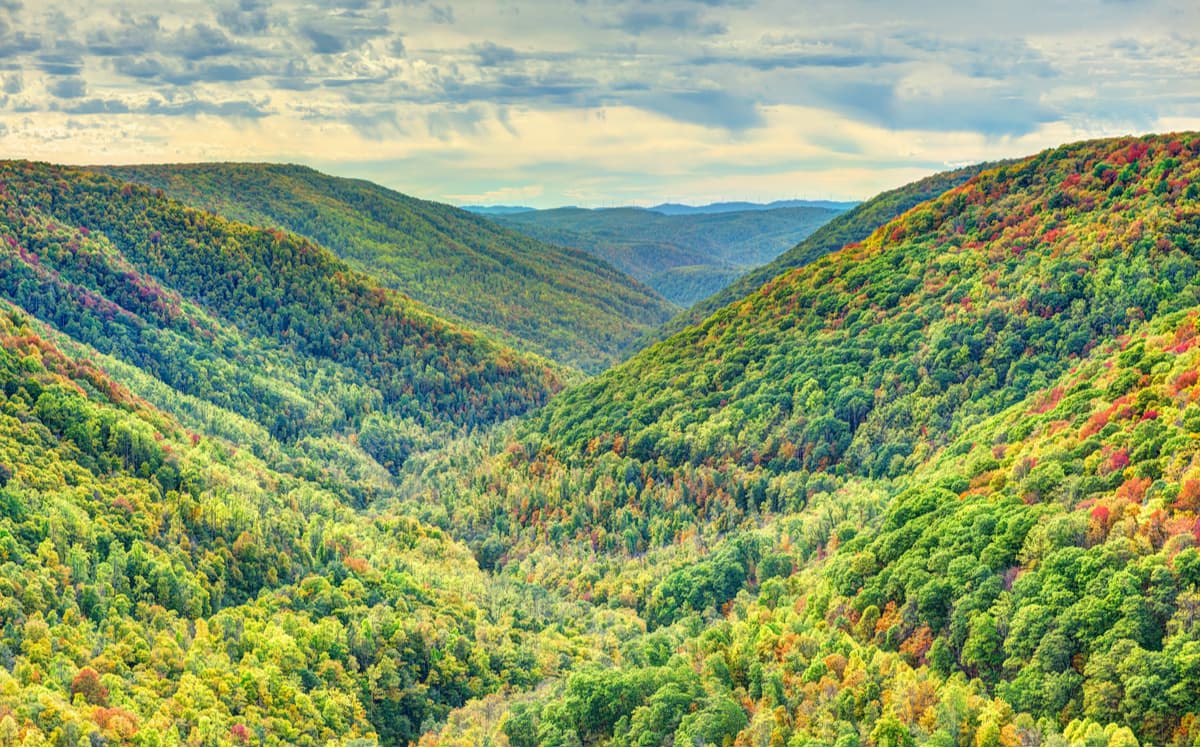 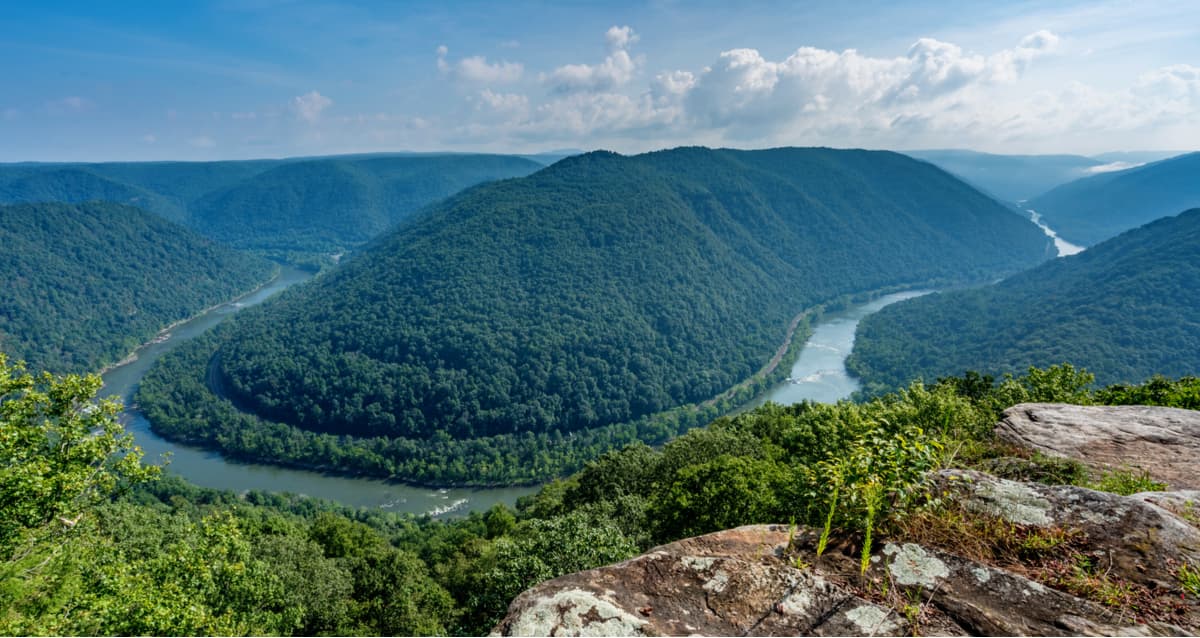 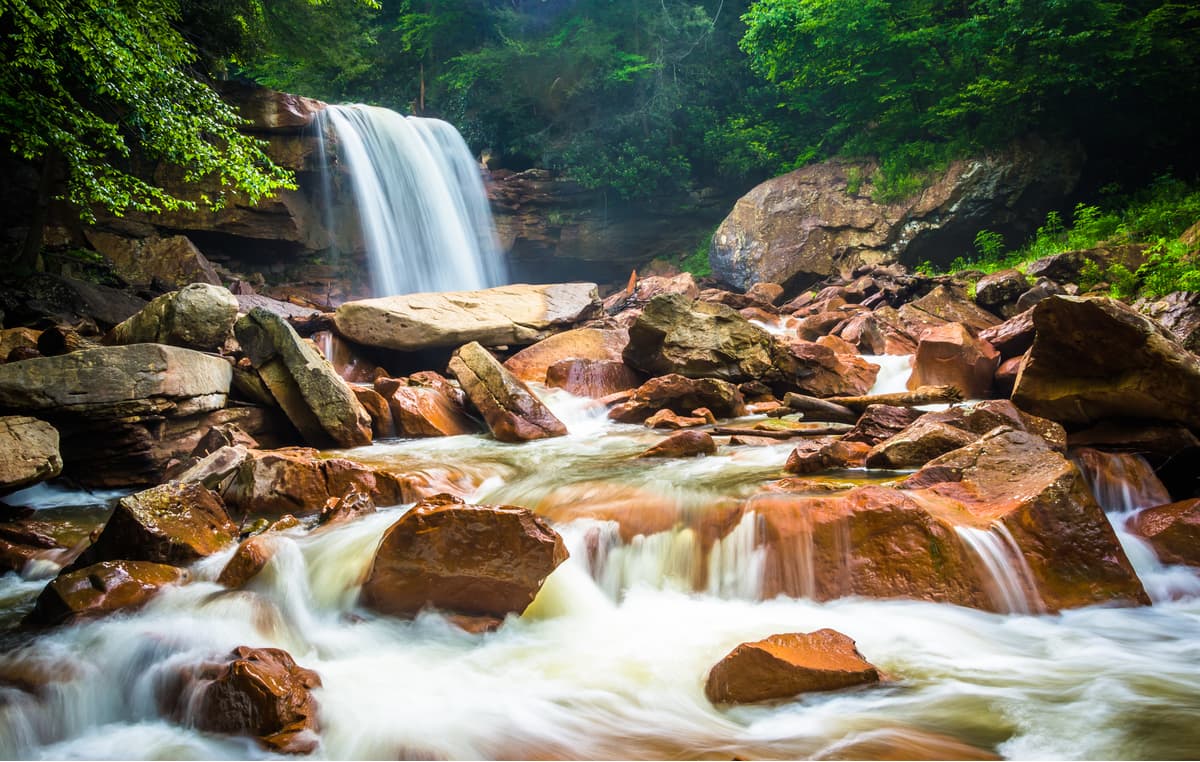 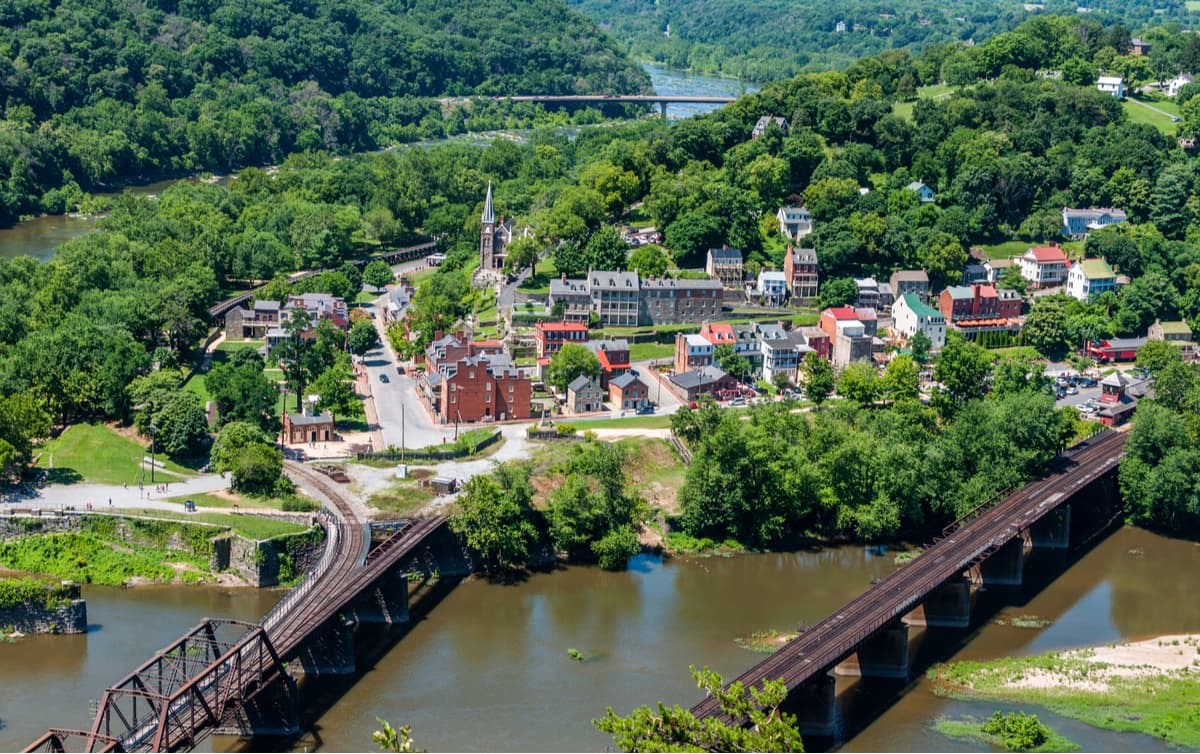 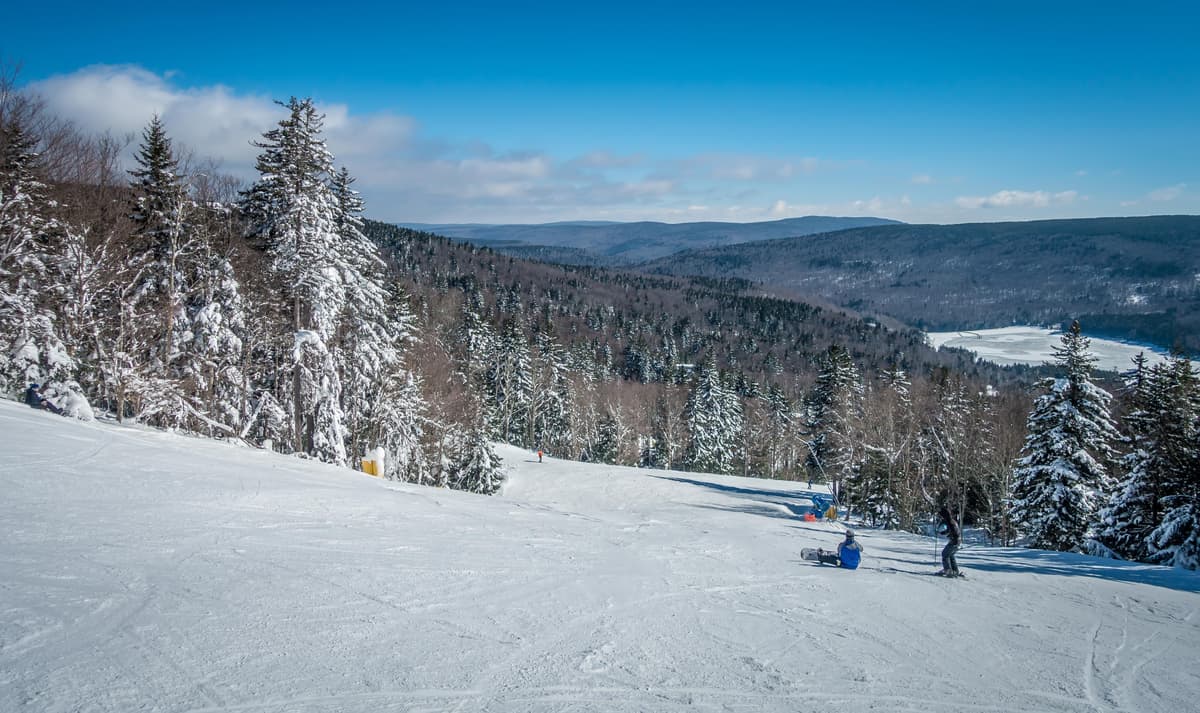 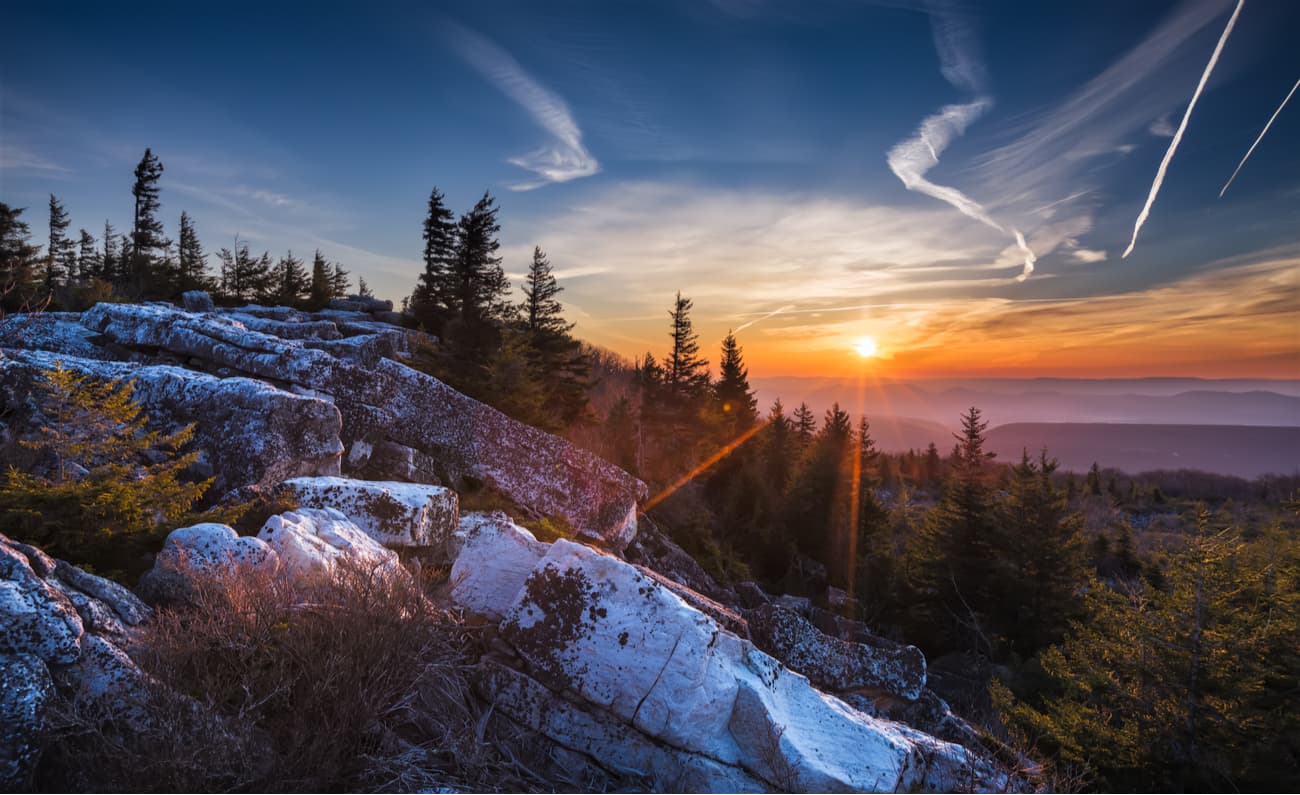