Trento
6
Mountains with prominence of 1 ⁠500 ⁠m / 4 ⁠921 ⁠ft or more.
Highpoint

Trento (Trentino) is one of the two provinces within the Trentino-South Tyrol region in northern Italy. The main natural feature of the province is Adamello-Brenta Nature Park, which is named after two mountain groups, the latter of which is part of the Dolomites. There are 1878 named mountains in Trento. Monte Cevedale (3,769 m / 12,365 ft) is the highest point in Trentino while the most prominent peak is Marmolada (3,342 m / 10,964 ft). 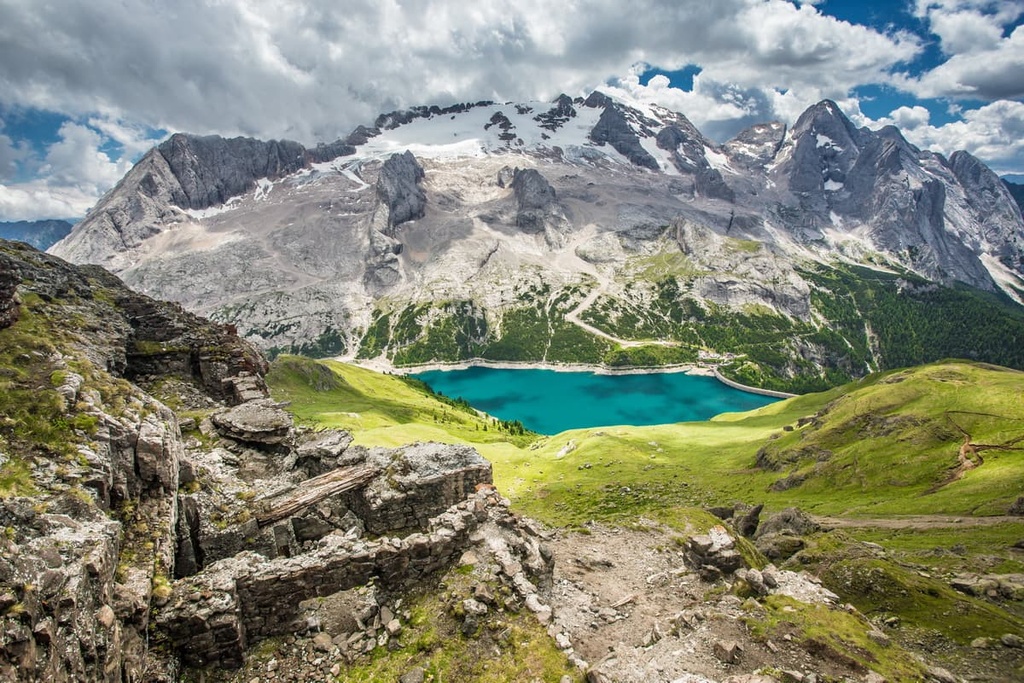 Naming of the Province

The name of the province of Trentino (Trento) comes from the name of its capital and largest city, Trento, which in turn is derived from Tridentum, the Latin name of the city, which means ‘trident.’

In Italian, the province is more often referred to as Trentino than by its official name, Provincia autonoma di Trento (Autonomous Province of Trento). In German, it is called Autonome Provinz Trient, and in the Ladin language, it is called Trentin.

The province of Trento is located in northern Italy in the Alps. It contains an area of 6,212 sq. km (2,398 sq. mi). It is the first of the two provinces in the Trentino-South Tyrol region, the second of which is South Tyrol, which is located to the north.

How to Get to Trentino

Public transport in the region is available via the local Trenitalia trains and buses of Trentino Trasporti, ATV Verona, Südtirol Mobil, and international Flixbus.

The nearest international airports to Trentino are located in Verona and Innsbruck with connections with many large cities in Europe and the world.

Generally speaking, the landscape of the central and the most-known part of the province is made by the wide and long 410 km (255 mi) Adige River. The Adige River flows through the province from north to south from Reschen Pass (1,504 m / 4,934 ft) on the border between Italy and Austria all the way to the Adriatic Sea near the city of Padua through the city of Trento itself.

The river, in turn, formed a huge valley of the same name that is known in Italian as Val d'Adige or Valle dell'Adige and in German as Etschtal. Other large and famous valleys in the province include Val di Sole and Val di Fassa to the north of the city of Trento, Vallagarina and Valle del Sarca to the south, Val Rendena to the west, and both Valsugana and Val di Fiemme to the east.

The third main feature of Trentino is the famous Garda Lake at its northern tip. This is the narrowest part of the province, but arguably the most picturesque. It closely resembles a Norwegian fjord and it is a true wonder to behold.

The mountains of Trento province are just incredible. The largest mountain groups found in the province are the Southern Rhaetian Alps, Fiemme Mountains, and the mighty Dolomites.

Finally, we can’t talk about Trentino without mentioning the medieval city of Trento itself, which features picturesque streets, squares, buildings, parks, and much, much more.

The mountain ranges and groups are organized as the following according to the Italian SOIUSA classification of the Alps:

The second most common classification system of the Alps is the German-Austrian club system (AVE). It exists only for the eastern part of this range and it is very similar to the SOIUSA classification system with a few differences. In particular, it lists the Vicentine Alps of Verona and Vicenza instead of calling them the Venetian Prealps. It also classifies Brenta as a separate group..

Among the interesting features on the intersection of political and physical maps of the province is the fact that most of the most famous mountain groups are located on the borders between Trento and Lombardy, South Tyrol and Belluno in Veneto. This is the case with respect to the peaks of Sella, Marmolada, and Pala in the Dolomites, as well as of the Adamello-Presanella Alps and the Ortler Alps in the Southern Rhaetian Alps.

Because of this fact, in my opinion, the most important ranges and groups of Trentino province are the Brenta Group. This is because these peaks are the highest mountains located entirely within the provincial boundaries. Another important range is Fiemme Mountains, as it is the largest by total area in the province..

The three most important peaks of the province of Trento include:

The main hiking areas in the province of Trento are Stelvio National Park, Adamello-Brenta Nature Park and Paneveggio-Pale di San Martino Nature Park. The first is the largest national park in Italy (130,728 ha/323,000 acres), and the latter 2 are part of the 10 nature parks that are located in the Dolomites.

The main trails in the region include:

All three routes are known for being physically demanding. They require climbing skills, experience, and equipment, and they include many via ferratas. In particular, the Brenta Group contains a series of the oldest via ferratas in all the Dolomites called Via delle Bocchette.

There are also several other parks located on the provincial borders, including Adamello Nature Park, Lessinia Nature Park, Monte Baldo Local Nature Park, Trudner Horn / Monte Corno Nature Park, Sciliar-Catinaccio Nature Park, and Dolomiti Bellunesi National Park. To get to them, you only need to take one step from Trentino into the provinces of Brescia, Verona, South Tyrol, and Belluno, respectively.

In the reserve, there is a locally popular loop trail, Giro delle Tre Cime del Bondone, which is 10.2 km (6.3 mi) long and has an elevation gain of 761 meters (2,201 ft). Most people complete the trail in 6 hours. From the summits, you can see Trento, the Adige Valley, and much more.

In short, the province of Trentino is one of the best places in Italy, Europe, and even the world for skiing. World-class ski resorts are located throughout the province and range from very famous mega-resorts to those that are small and totally non-touristy.

The closest and largest ski area to Trento is Skirama Dolomiti Adamello Brenta. It is located to the west of the city in the Rendena Valley. It is not one but a whole system of eight resorts connected by pistes and a single skipass:

An even larger system, Dolomiti Superski, is located in the north of the province. Of the total 12 ski resorts it includes five are located in Trentino:

Among the smaller and independent resorts in the region, there are:

They are located mainly in the Fiemme Mountains between the center of the Dolomites and the Adamello-Brenta Nature Park.

To find out about the open trails and to get real-time ski lift updates, visit the Trentino-Alto Adige / Südtirol region page in the World Mountain Lifts section of PeakVisor.

For more information about the province of Trentino, visit the official tourist center of Trentino:

Similar tourist offices are also located in all major cities and resorts in the province.

There are at least 145 mountain huts in the province of Trentino. These huts are the main accommodation options when hiking in the high mountains. They are usually located in the foothills, in the passes, or in the valleys. Some of them are quite famous in their own right.

It is also located near the highest peak of the province, Cevedale, in Stelvio National Park, on the border between Trentino and Lombardy at an elevation of 3,535 m (11,597 ft). According to the Casanova family, who run it, it is actually the highest hut in the entire Eastern Alps. Usually, the huts are located at an elevation of up to 2,500 m (8,202 ft).

Among other famous rifugios, I would mention and very much so recommend Control near Marmolada, Rosetta in Pale di San Martino, Alimonta in Brenta, Vederna in Dolomiti Bellunesi. But that's a very short list—there are so many wonderful huts to choose from in the province.

Among other types of accommodation in Trento province, you will find free alpine shelters called bivaccos (check out bivacco Renato Reali in the Pala Group) and campsites. Camsites can also be found near the most famous mountains, including the campsite in the village of Malga Ciapela near Marmolada, which bears the mountain's name.

You can also pitch a tent in the province. Although technically forbidden by law, you can pitch a tent in an emergency (locals do it on occasion in small non-tourist groups like Lagorai in the Fiemme Mountains).

Before and after your hike, you can easily find many other types of accommodation, including traditional alpine hotels, charming family-run B&Bs, and the like at the region’s many cities, towns and resorts.

In my experience, the smaller the place, the less expensive and more quiet it is. But that doesn’t mean it’s a worse place to stay—the level of service is almost everywhere equally excellent in Trentino.

Trento is the heart of the province of Trentino in the literal sense. If I were to describe it in one sentence, I would say that it is a medieval city with two styles—Italian and Tyrolean—and with a modern flair.

The main attractions of Trento are as follows:

The other nine largest towns in the province include Rovereto, Pergine Valsugana, Arco, Riva del Garda, Mori, Lavis, Ala, Levico Terme and Mezzolombardo. Any of them can be considered a good alternative to the capital of Trentino or another place where you can continue your journey.

The main resorts in Trentino, which are small in size, but important in terms of tourism, include Pinzolo and Madonna di Campiglio in Val Rendena; Molveno on the shores of the lake of the same name; and Male in Val di Sole, all of which are located to the south of Trento.

To the east and north of Trento, you can find the resorts of Fiera di Primiero and San Martino di Castrozza in the Pala Group; Cavalese and Predazzo in Val di Fiemme; and Moena and Alba di Canazei in Val di Fassa. 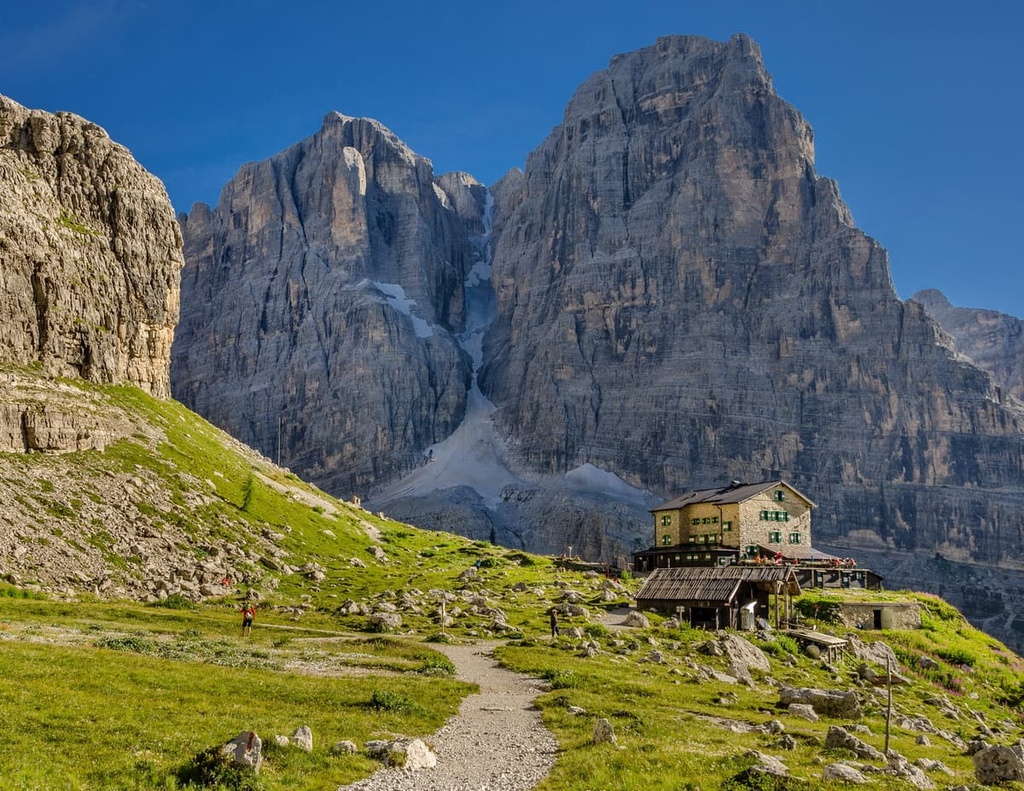 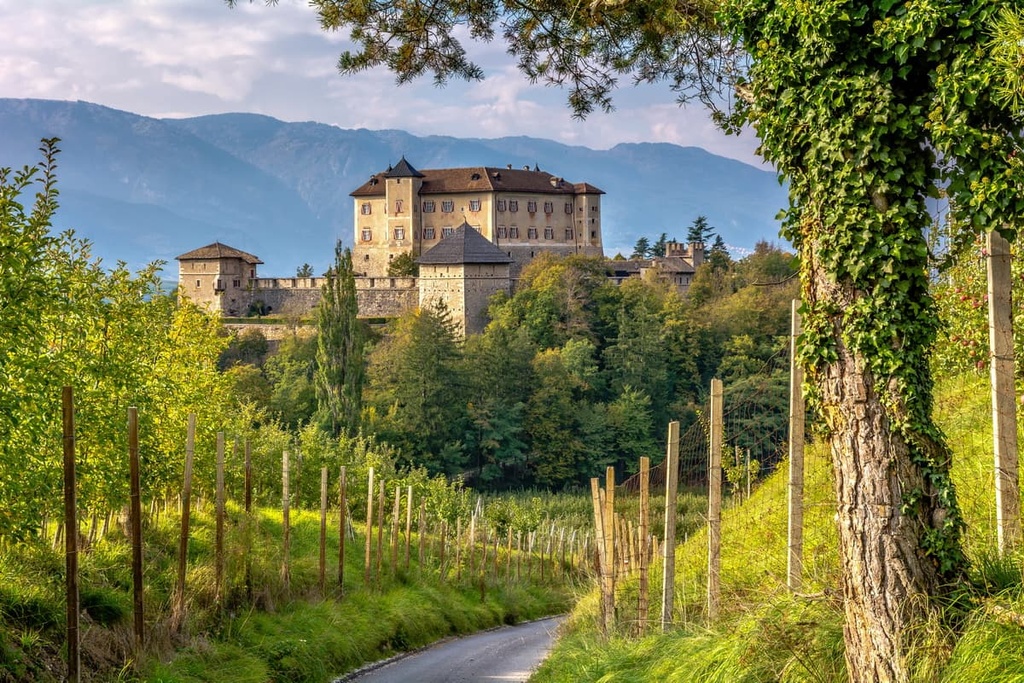 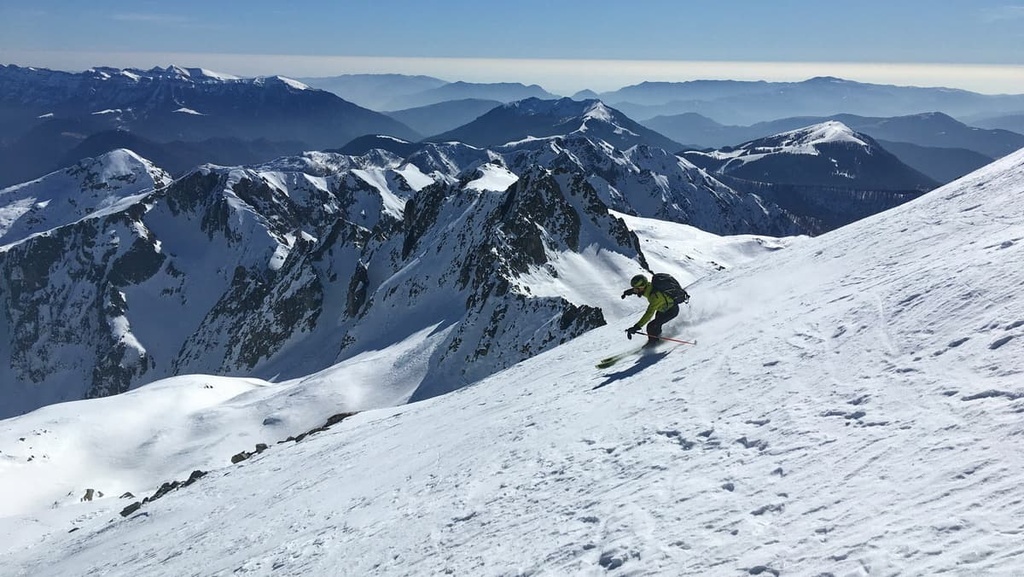 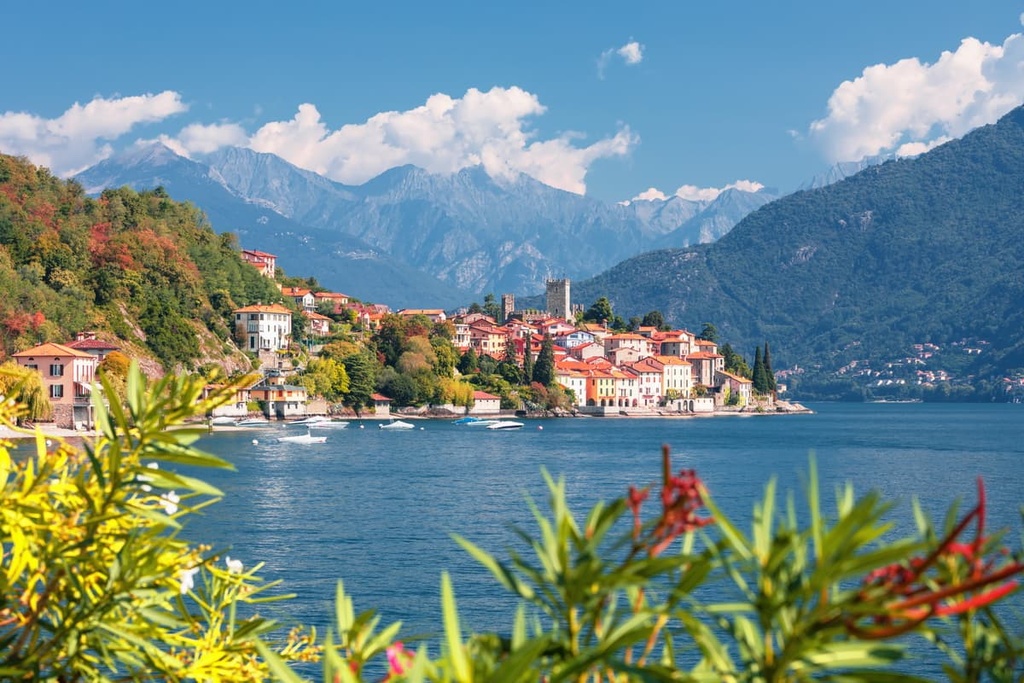 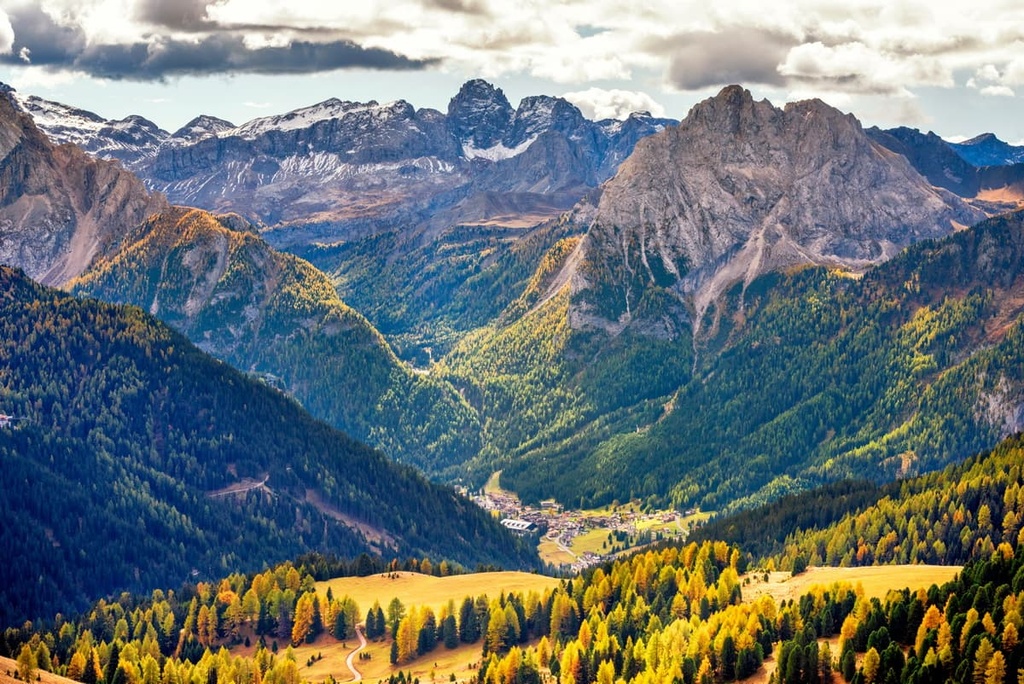 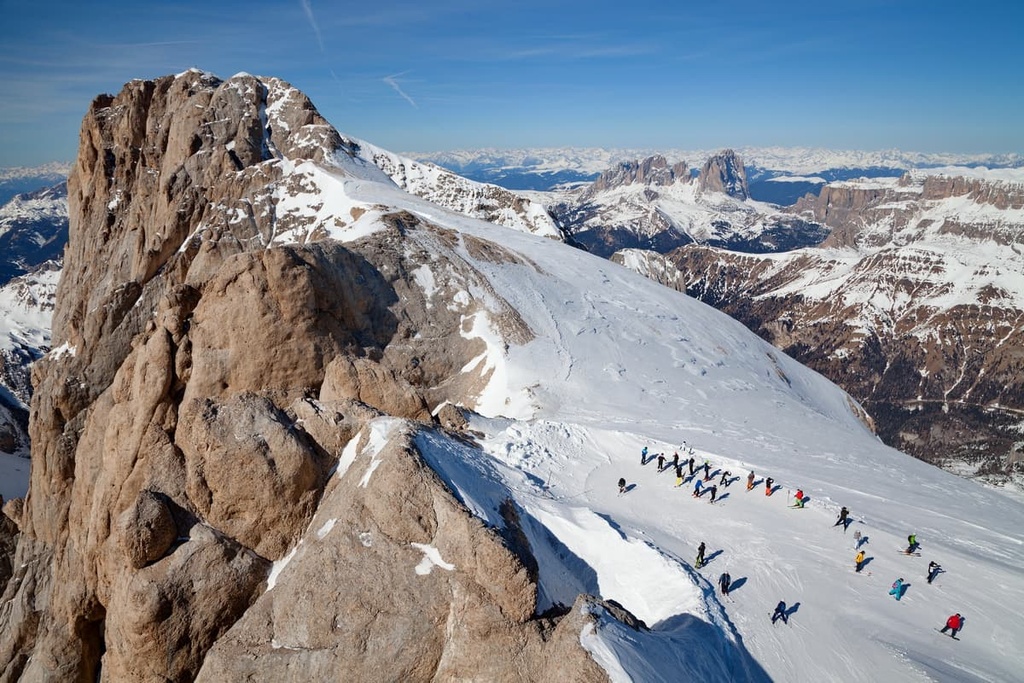