Designated as a national park in 1990, Dolomiti Bellunesi National Park is the wildest area of the Dolomites. With an area of 31.034 sq.km., it is one of the smallest national parks in Italy.

Schiara is one of the most impressive mountains in this area. At an elevation of 2,565 m, it is the highest out of 181 named mountains in the Park. The most prominent peak is little-known Piz di Mezzodi. The national park boundaries almost entirely coincide with the Cimonega Group in the southern part of the world-famous Dolomites. 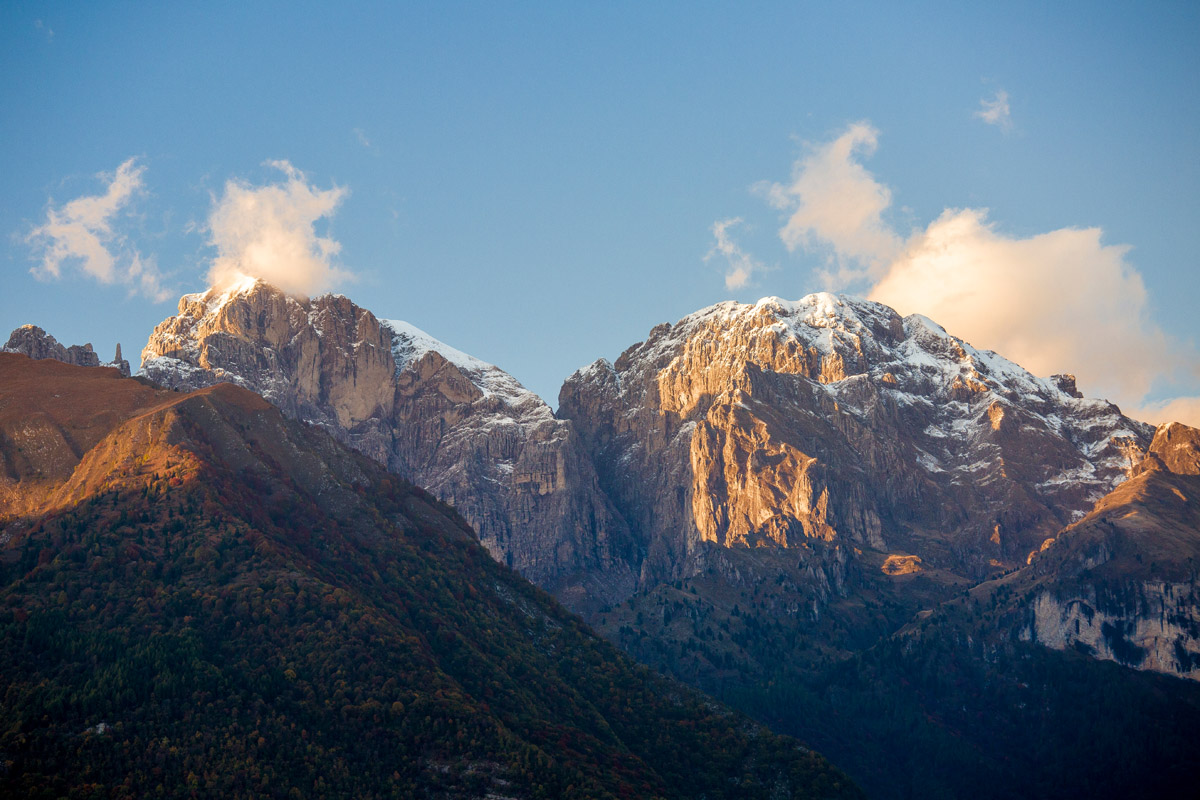 The history of the Dolomiti Bellunesi began in the warm tropical seas (something similar to the Caribbean now) more than two hundred million years ago during the Mesozoic Era (when the dinosaurs assumedly roamed the earth). Over the millennia, the accumulation formed the sedimentary rock strata. Later, the collision between the European and African tectonic plates during the Tertiary Era (66-2.5mln years ago) deformed and folded the sediments. The Alps came into existence. Since then, water and wind erosion have been working on the exposed rock. Today in the National Park, visitors can admire large meadow basins, deep and wide valleys, large and sunny mountain faces.

3D Map of the Vette Feltrine in the PeakVisor app

Many cirques and moraines are the heritage of the Ice Age. Frequently appearing in the toponyms "buse" and "cadin" mean cirque in the local dialect. Shaped by small local glaciers, they usually have the shape of a broad niche surrounded by steep slopes and characterized by a large and almost flat bottom. Monte Pavione offers an unparalleled panorama of these features called The Cirques of Vette Feltrine (In Italian: la Busa delle Vette Feltrine).

The Dolomiti Bellunesi is the Dolomites' best-kept secret. Almost unknown to the crowds (including the Italians themselves), it is the location of extraordinary landscape beauty and far off-the-beaten-path. The only word of caution is please be aware of the ticks in this area. While present almost everywhere in the Alps here due to untouched wilderness their population grew denser. The advice is to stay away from high grass, wear full-length pants tucked in the shoes to impede easy access to the skin, and use bright or light color outfit to notice them easily.

For outdoor enthusiasts, there are 52 CAI (in Italian: Club Alpino Italiano - Italian Alpine Club) marked trails in the National Park. Famous long treks Alta Via delle Dolomiti n.1 and n.2 cross the area as well. We suggest consulting the National Park's official website for a detailed description of all the trails. Here are the most interesting ones:

Located in the central part of the National Park, the Sun Mountains (Italian: Monti del Sole) is its wildest section. The main peak of this area is Piz di Mezzodi (2,240 m). Despite moderate elevations of the peaks, most of the trails here require a good level of hiking experience. Especially strenuous are the treks around the towers of Feruc.

Named after a small town of Feltre to the south, this section is much friendlier and easier to hike in. Some of the most interesting and scenic hikes can be found here.

At an elevation of 2,547 m. majestic Sass di Mura is the highest in this section (and the second highest in the Park). Together with slightly lower Piz di Sagron (2,486 m) they make a spectacular composition. The best way to appreciate the grandeur of these peaks is from the trail around Cima Palughet reachable by a short walk from Cereda Pass.

Monte Pizzocco in the photo above boasts a spectacular panorama of the Eternal Plains (Italian: Piani Eterni) and peaks of Monti del Sole.

The only remaining chain in this group is the Feltre Peaks (Italian: Vette Feltrine) famous for scenic glacial cirques. The chain includes Monte Pavione in the southwestern end, the highest in the chain Cima Dodici, La Pietena, Cima del Diavolo, Monte Ramezza, and Sasso di Scarnia in the northeastern end. The most popular summit of the chain is Monte Pavione which is easily reachable by 2-hour trail from Dal Piaz mountain hut. From the top, visitors enjoy sweeping views of Pale di San Martino. Weather permitting, this itinerary can be done also in snowshoes during winter.

Compactly located to the north of Belluno, the Schiara Group encompasses the highest peaks of the National Park: Schiara itself, Talvena, Cima de Zita, and Pelf. The latest is arguably the easiest of them and boasts a gorgeous panorama of the Dolomites' gems featuring Monte Pelmo and Antelao. On a clear day, one can even see the curve of the Adriatic Sea coast.

The Van di Citta are two glacial cirques side by side (van is another local word for the cirque). The itinerary leads to one of the most isolated and lonesome places of the Dolomites and gives an opportunity to observe pristine nature of the unspoilt glacial environment.

There are two other spectacular summits in this section:

Finally, there is an interesting Cadini del Brenton trail. It is an easy trail featuring a series of deep cavities dug by small waterfalls of the stream Brenton. These features are often referred to as a giant's cauldron (Italian: Marmitte dei giganti). Spectacular colors and perfect shapes are amazing. On the other side of the parking area, there's a broadwalk to the terrace overlooking the Soffia waterfall (Italian: Cascata della Soffia).

If you haven't yet planned an expedition to the Dolomiti Bellunesi then here's an inspirational video from there.

The southern Dolomites section is overshadowed by more renowned northern resorts such as Cortina d'Ampezzo, Ortisei, Moena that get most of the attention.

The ancient city of Belluno is the capital of the namesake province in the Veneto region and it gives the name to the National Park. Nestled between the imposing Schiara Massif of the Dolomites and the Alpine foothills of the Venetian Prealps, the city is conveniently located for those planning to visit the National Park.

Belluno with Monte Serva behind and to the right

With a population of roughly 36,000 citizens, Belluno is one of the largest in the Dolomites. Founded around 220-200 BC, the town played an important role in the Roman Republic. There are many remnants of the medieval grandeur as well. Visit Piazza del Duomo, Palazzo dei Rettori (built in 1491), a neo-gothic Palazzo Rosso. The Cathedral (Duomo) has an unusual onion-shaped dome with an angel on top created by the famous local artist Andrea Brustolone. The architecture of the town is a blend of northern alpine chalets and venetian gothic style. Numerous fountains are noteworthy as well. Try the local cuisine, it is typically based on the local produce, Fagioli di Lamon IGP is worth giving a try, it is beans and IGP means protected by the geographical name. And one more thing is pastine - a pate made of Italian sausage with herbs and spices, the pate is fried or grilled in a form of a flat cutlet.

A little-known small charming town to the north of the National Park, which is surprisingly home to most of the Italian eyewear industry. Agordo is literally surrounded by towering Dolomite peaks. With many accommodation options and restaurants, it is a perfect basecamp for the southern Dolomites adventures. 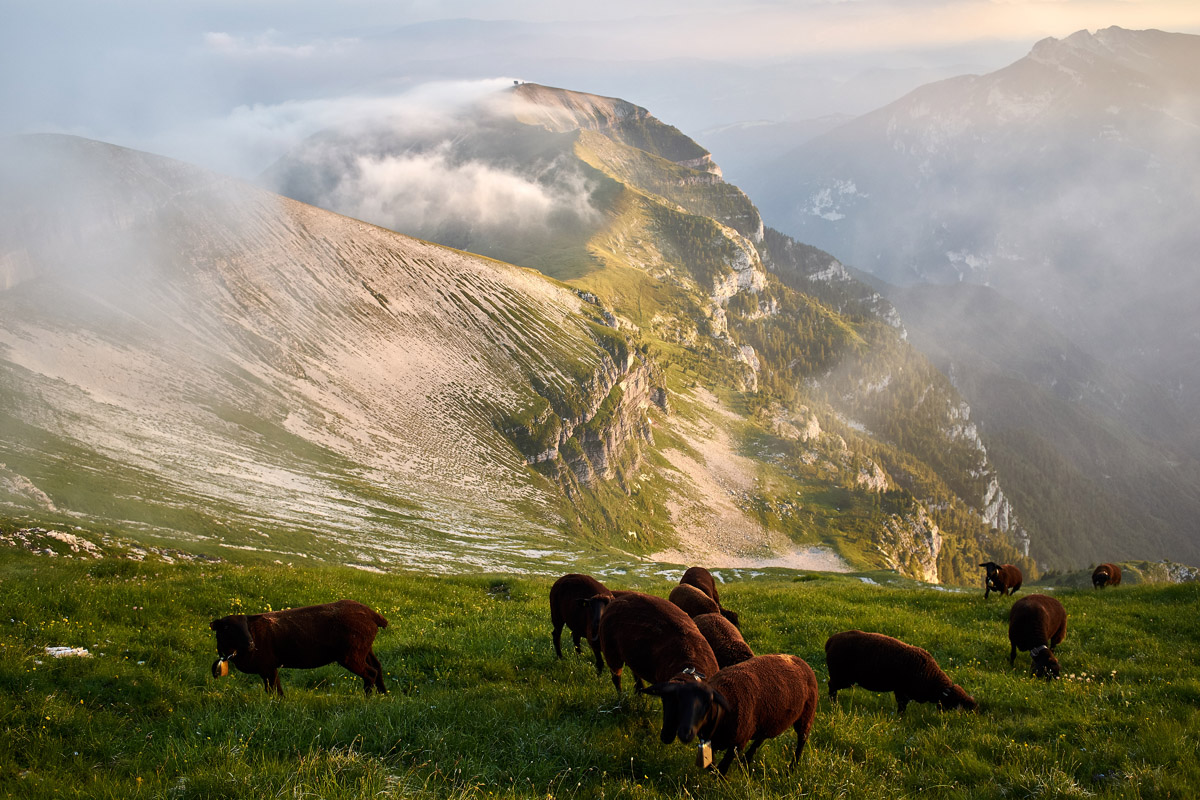 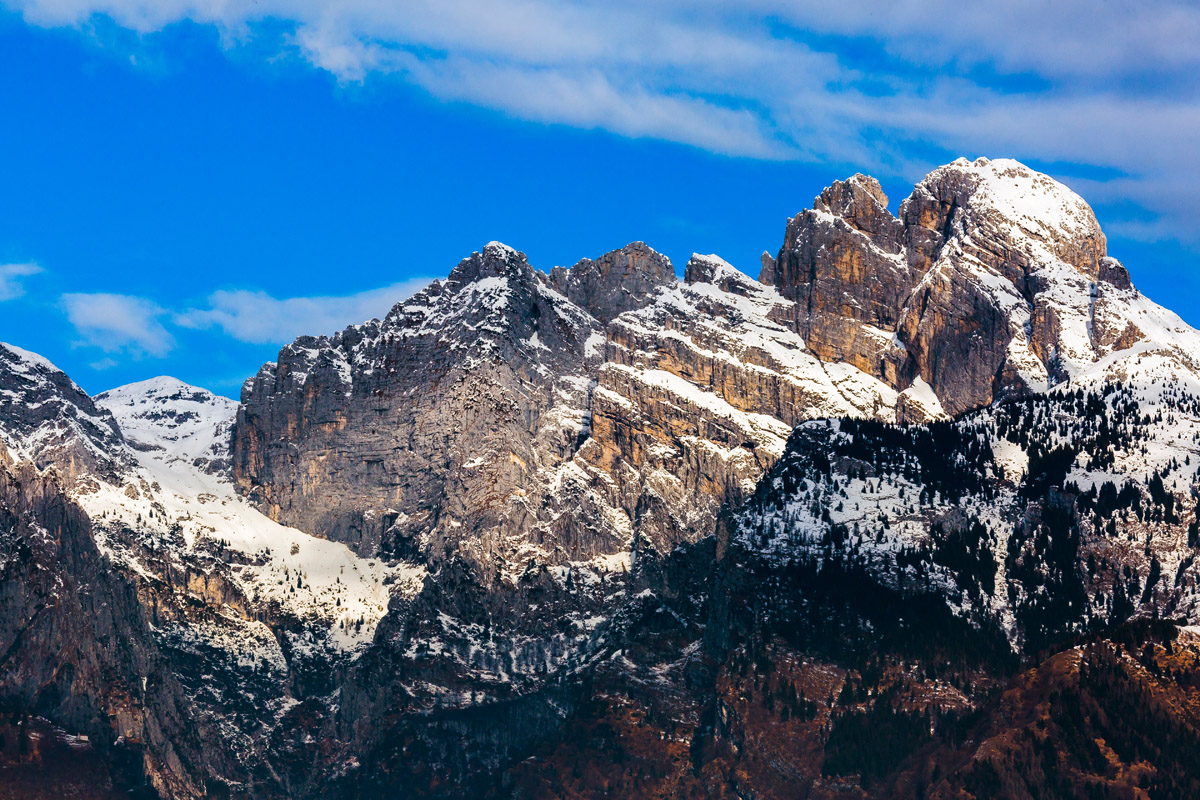 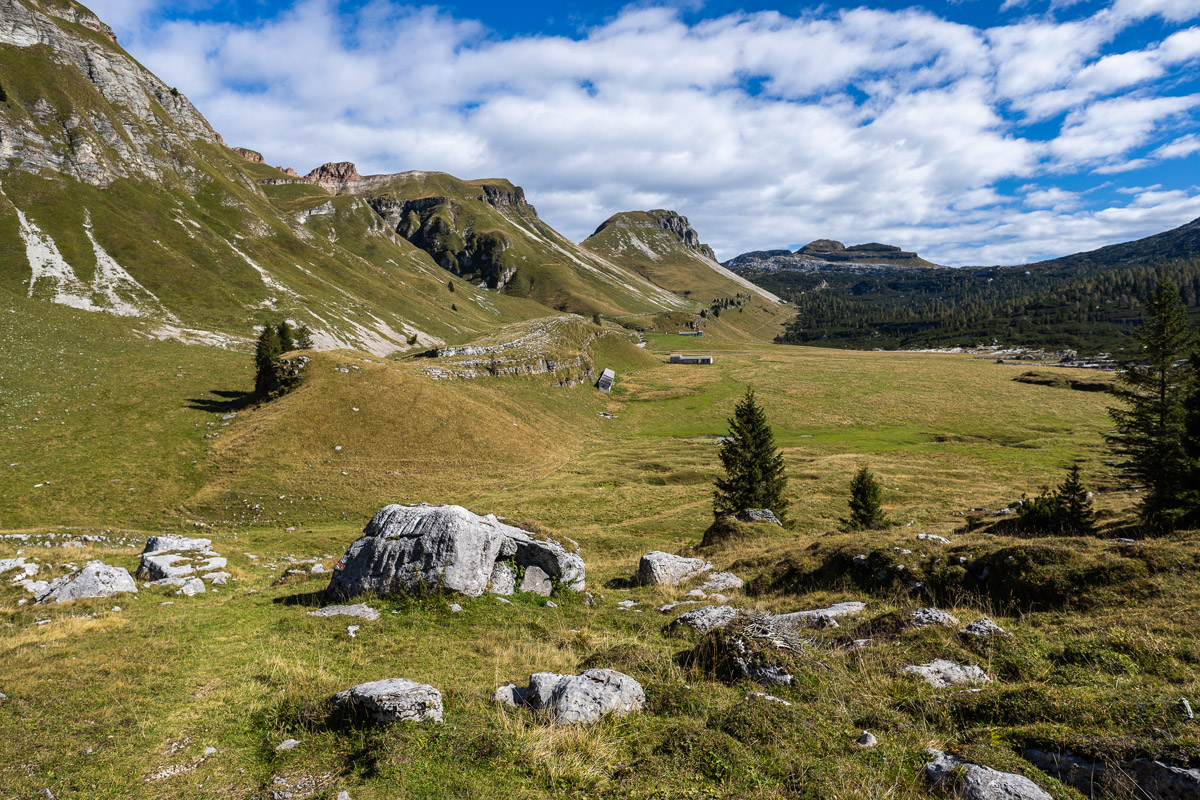 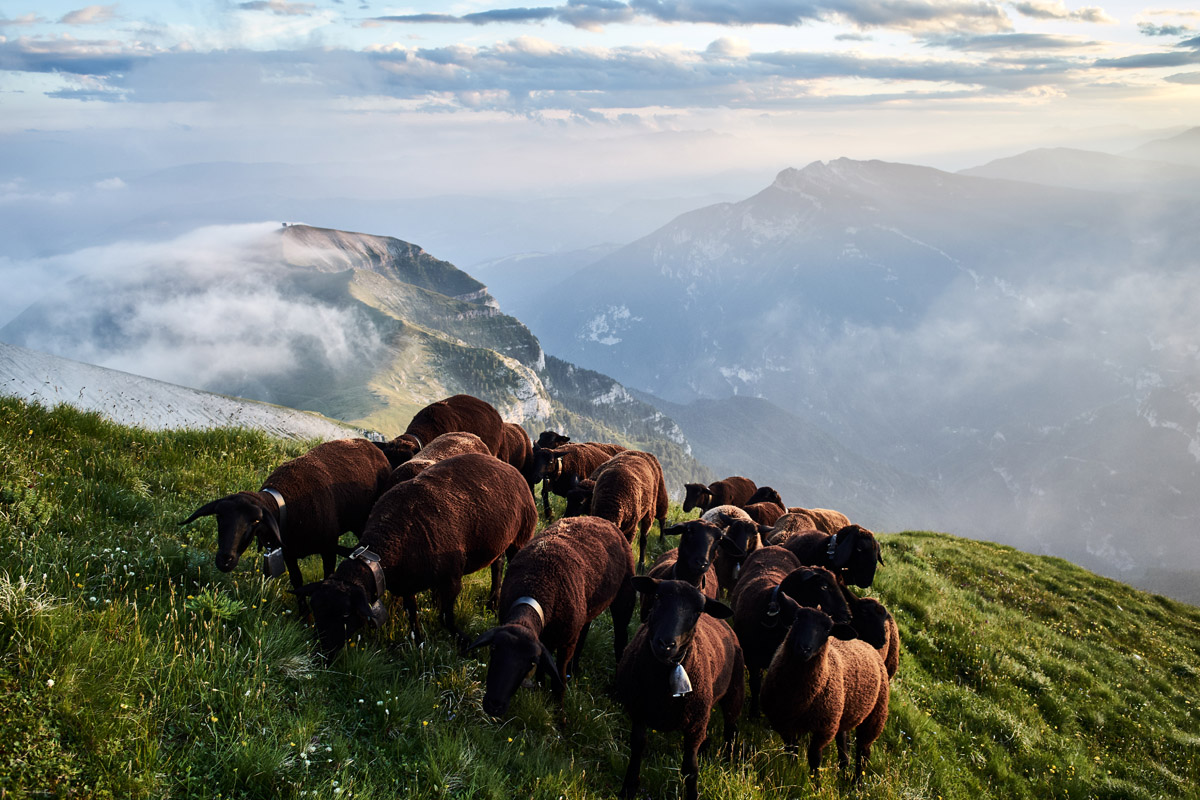 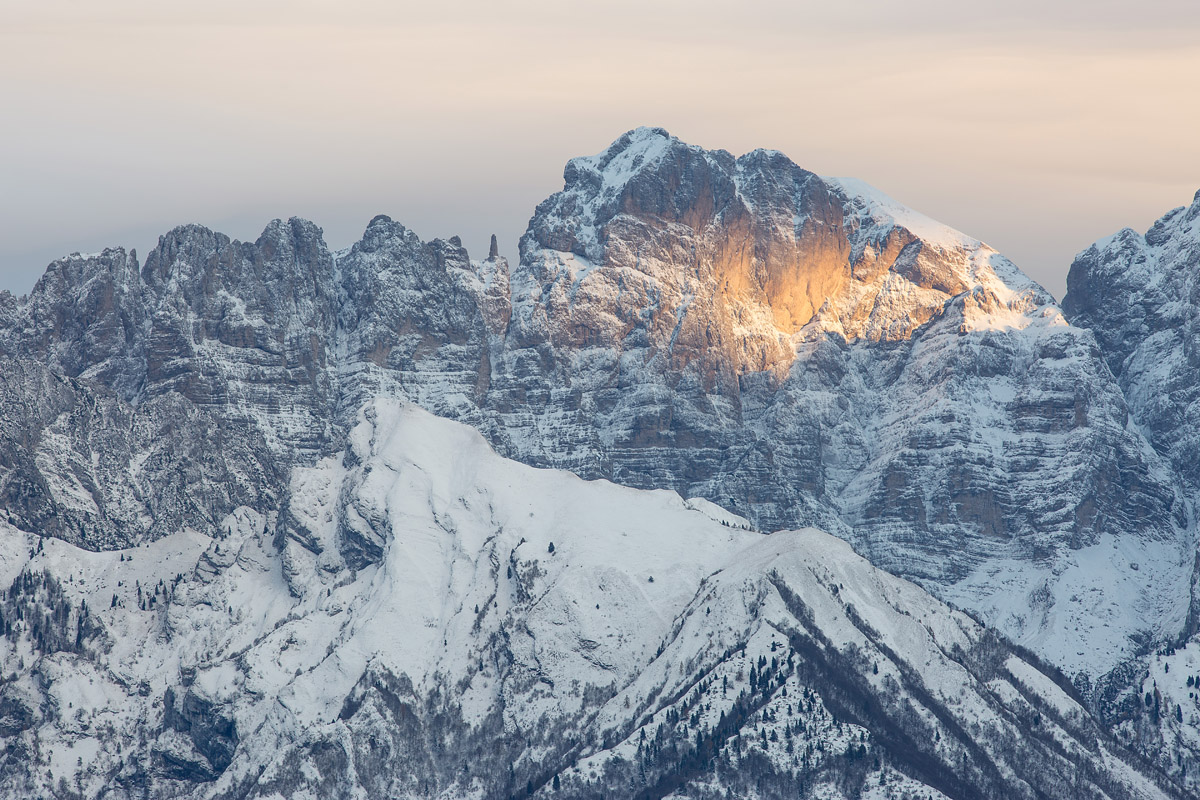 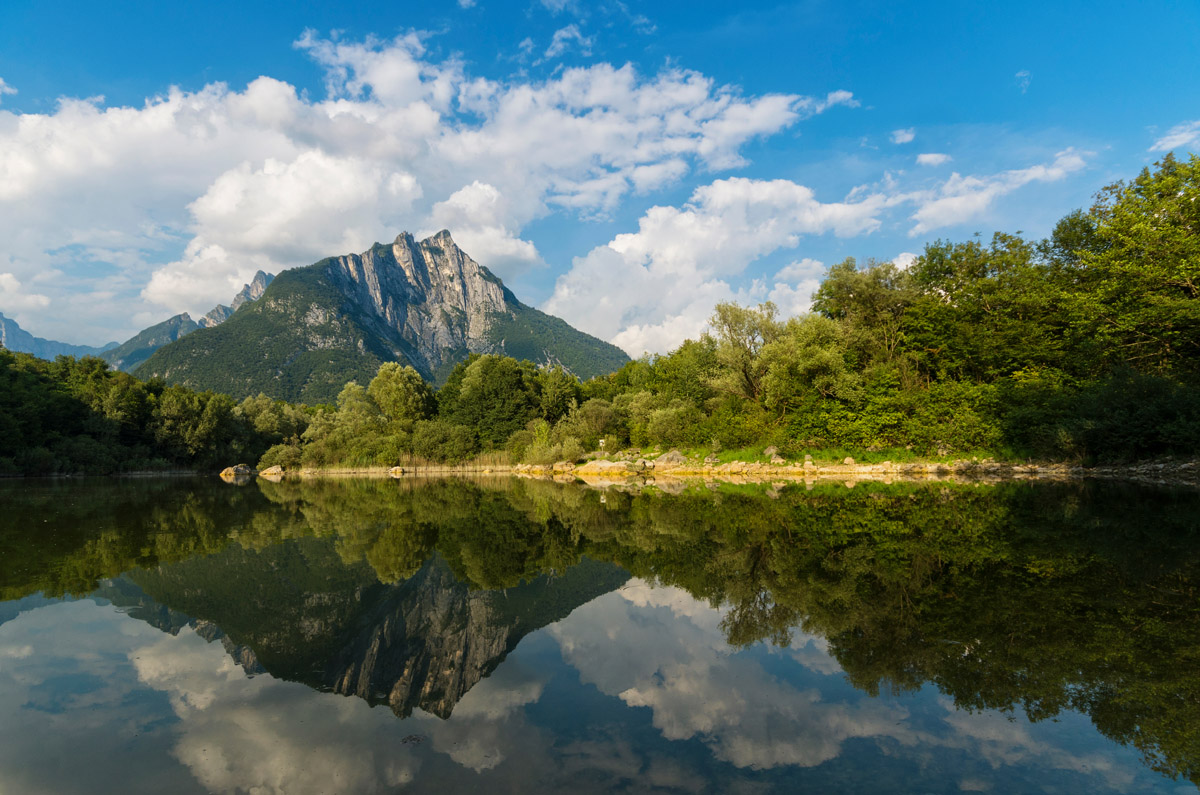