The West Dolomites is one of the two large subdivisions of the Dolomites of northern Italy alongside the East Dolomites. The range is characterized by its long chains of steep, rugged, and usually shaped peaks that attracts thousands of tourists, travelers and outdoor enthusiasts to the region each year. In total, there are 819 named mountains in the West Dolomites, the highest and most prominent of which is Marmolada (3,342 m / 10,964 ft). 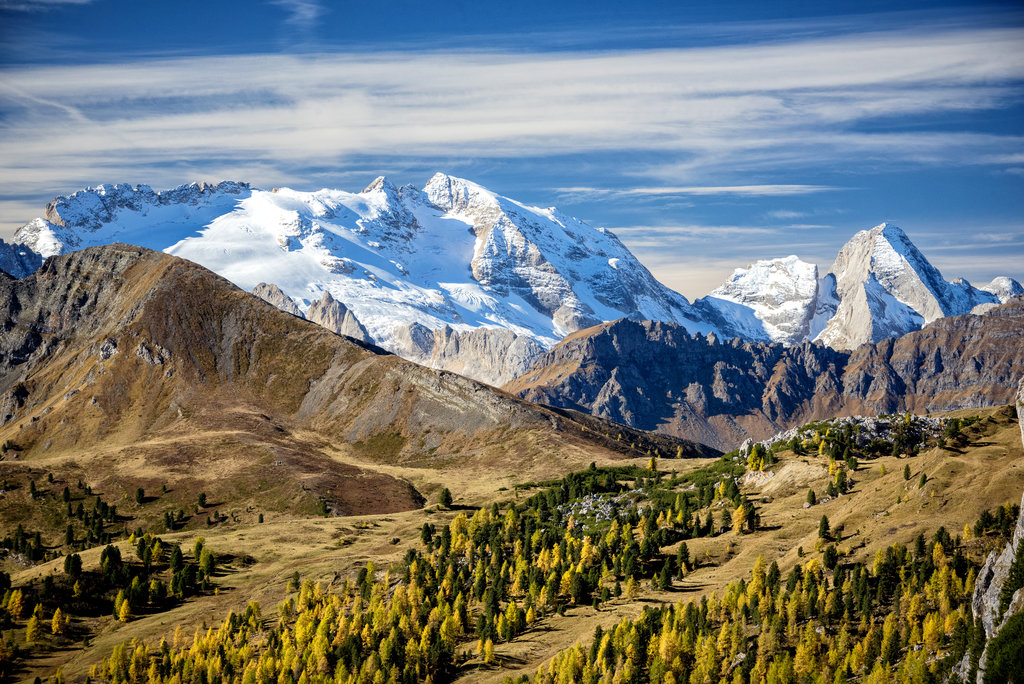 The name of the West Dolomites is relatively self-explanatory. It implies that this is the western part of the Dolomites, which is a subrange of the Alps located in northern Italy.

However, the name of the range itself comes from its most common rock, dolomite. Dolomite is a durable mineral that is found in such large quantities in this unique mountain range. The mineral was named after the French scientist Déodat Gratet de Dolomieu, who first studied it in detail and described it in one of his scientific publications in the late nineteenth century.

The West Dolomites is located in northern Italy in the geographical, geological, natural, and cultural region of the Dolomites. The western part of the range includes about half of the Dolomites region.

Getting to West Dolomites

The two main cities of the Western Dolomites, Trento, and Bolzano, are located on the western borders of the region. Trento is the closer of the two and you can reach it by car, train, or bus from Verona. You can also make it to Bolzano from Innsbruck in Austria or from Trento itself if you’re traveling from the south.

To get to the heart of the West Dolomites from the south, you need to go from Verona or Venice toward Feltre and Belluno. From there, you’ll go to Fiera di Primiero and Agordo. The largest city in the north of the region is Bruneck / Brunnico. The fastest way to get there is by car or bus from Innsbruck or Liez in Austria.

Finally, you can easily get from the East Dolomites to the West Dolomites by traveling along the internal borders of the regions. For example, one of the most picturesque roads of the whole Dolomites runs just between the two regions—from Arabba to Cortina d’Ampezzo via Falzarego Pass. Here, on the pass, you’ll find yourself at the center of the Dolomites.

According to UNESCO, which declared the Dolomites as a World Heritage Site in 2009, the range as a whole consists of nine subgroups. Of these nine subgroups, seven are located in the West Dolomites, including:

With regards to the geology of the range itself, as we’ve mentioned, it mostly consists of dolomite rock. The dolomite in the western part of the range is generally more fragile than in the easter part. As a result, this area has fewer major climbing routes and via ferratas than its eastern counterpart.

Additionally, the West Dolomites contain a spectacular array of landscape features. There are too many to name here, but some of the best examples of each feature include:

The West Dolomites belong to the Dolomites, one of the main mountain groups in the Eastern Alps according to both common classifications of this mountain range, the German-Austrian Alpine Club and the Italian SOIUSA.

In the German-Austrian Alpine Club classification system (AVE), this is the group number 52 out of 68. In the SOIUSA, it is numbered 31 out of 36 total groups.

The highest peak of West Dolomites and the whole region is Marmolada. It is also the most prominent mountain and one of two ultra-mountains in the region with the prominence of more than 1,500 m (4,921 ft).

Marmolada also stands out among other peaks because it has the only glacier in the Dolomites, though the glacier itself is shrinking due to climate change.

Nine of the other high peaks of the West Dolomites include:

There are many unusual and iconic peaks in the West Dolomites. Some of the most notable include:

The entire Langkofel / Sassolungo Group is also visually stunning and is well worth a visit if you’re in the area.

If you’re looking to get off the beaten path, check out Cimonega in the south of the range. Cimonega is arguably the least touristy group in the Dolomites, even though it is one of the largest in terms of area.

Simply put, if you want to seek out solitude in these mountains, you will love Cimonega.

Best Hikes in the West Dolomites

The West Dolomites are a great destination for day hiking, backpacking, and climbing via ferratas. Here are some of the best hikes and activities that you can enjoy in the West Dolomites.

The West Dolomites is home to five of the ten large natural parks in the Dolomites, namely:

Each of these parks offers hiking trails of varying lengths from a day to a week, but Bletterbach stands out as a unique destination in the region where you can experience the entire geology of the Dolomites in one place.

The best known long multi-day trails in the region include:

Of this list, I would recommend Palaronda. It is a trek of around 5–6 days, and it takes you through a variety of natural landscapes including the largest mountain group in the Dolomites.

The main via ferrata of the West Dolomites include:

But you will find most of the range’s via ferrata in two groups, Pala and Brenta, where they are combined in a systems of itineraries called “Palaronda Ferrata Trek” and “Via delle Bocchette,” respectively.

The Western Dolomites are home to 7 of the 12 ski resorts that make up the Dolomiti Superski system, namely:

Plus, separately, there is Alta Badia Ski Area, which is located in the valley of the same name on the border of West and East Dolomites.

However, the total number of ski resorts is much higher than this if you include resorts that aren’t part of the Dolomiti Superski system.

For example, in the Lüsener Berge mountain group you can find the resort Plose on its namesake mountain between the town of Lüsen in the city of Brixen / Bressanone and the village of St. Magdalena / Santa Magdalena. In the Fiemme Mountains, there is also a small resort called Ski Center Lagorai, which is located on the Brocon Pass.

When traveling through the West Dolomites, be sure to visit one of the official tourist centers for the region that’s located in Trento and Bolzano. In addition, there are similar tourist offices in almost all other towns and resorts in the Dolomites. Here are some regional tourist offices that can provide you with more information:

For more help planning your trip, head to the two official tourist sites of the West Dolomites: VisitTrentino.info and SuedTirol.info.

The main accommodation options when hiking in the Western Dolomites are the same as for the whole region. This includes mountain huts, bivouacs, campsites, and the standard selection of hotels and B&Bs.

First and foremost, mountain huts (rifugios) in the region operate on a “shared room plus breakfast and dinner for an average of €60 per night” system. However, there are rifugios where you can rent a private double room or even take a Finnish sauna, as in the rifugio Lagazuoi. The prices for your stay can also vary from rifugio to rifugio.

The main mountain huts of the West Dolomites include:

In the West Dolomites, there are the free alpine shelters and cabins (bivaссos). There aren’t as many bivaccos as there are rifugios, but the main advantage of bivaccos, besides the lack of fees, is that they are open year-round and that they are located in the most remote corners of the region.

The main bivaсcos of the West Dolomites area include:

For those who prefer a mix of civilization and nature, I recommend choosing one of the campgrounds in the region. They are located in the valleys and at the foot of the mountains. At a typical campsite, you will find everything you need for the night, including the ability to rent a tent.

The main campsites of the West Dolomites include

Wild camping is officially illegal in the Dolomites, but there’s a loophole in the local laws saying that if you haven’t found lodging while hiking, you have the right to pitch a tent—which makes a lot of sense, actually, just to avoid freezing at high elevations.

So you can pitch a tent, but it is better to do it in the region’s most non-touristy mountain groups, such as Bosconero or Marmarole, where there are only a few huts available anyway.

Finally, before and after your hike, you can find accommodation in any of the towns or villages in the West Dolomites.

In particular, the typical Alpine mountain cottages (“casa in montagna” or “casa vacanza dolomiti”) are very popular. For example, there are nice cottages on Passo Croce d’Aune and in the whole Feltrino region surrounding the town of Feltre in the province of Belluno.

When traveling through the Western Dolomites region, consider choosing one or more towns and resorts from the list below as your temporary base. Or, you can bounce from town to town as you adventure in the range. There are at least two dozen communities in this part of the Dolomites, so you’ll have no shortage of towns to check out.

In these towns, you will find not only beautiful mountain scenery but also equally beautiful architecture and other attractions. This gives you the opportunity to learn about the history of these places and to communicate with the locals. They speak mostly German and Italian, but most know English at a basic level.

Separately, it should be said that West Dolomites is the center of the Ladins, the major ethnic group of the Dolomites. In particular, it is home to two of the four traditionally Ladin valleys: Fassa and Gardena. The other two valleys, Livinallongo and Ampezzo, are located in the Eastern Dolomites region.

Here’s a quick list of the main cities and towns you’ll find in each mountain group in the West Dolomites: 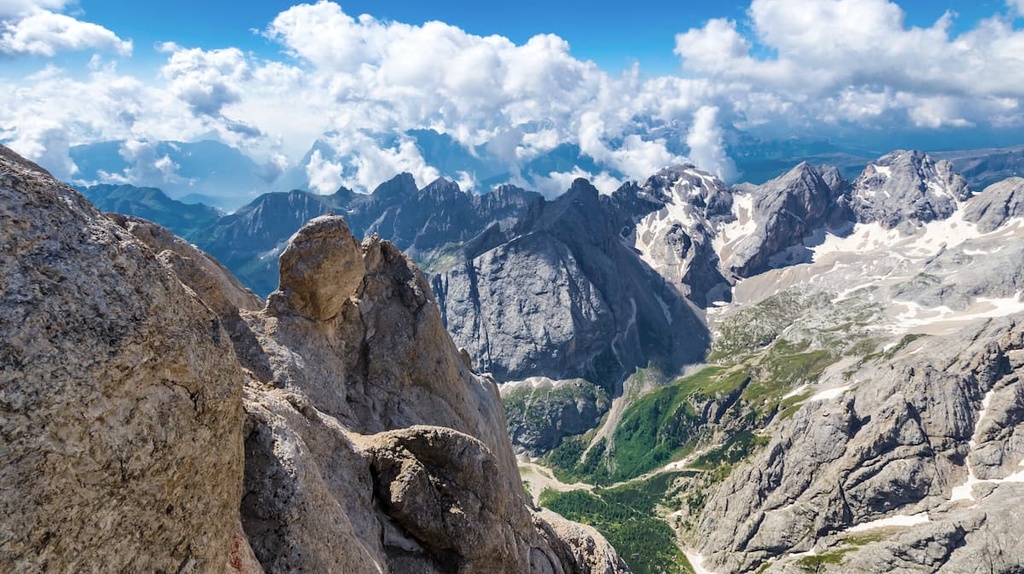 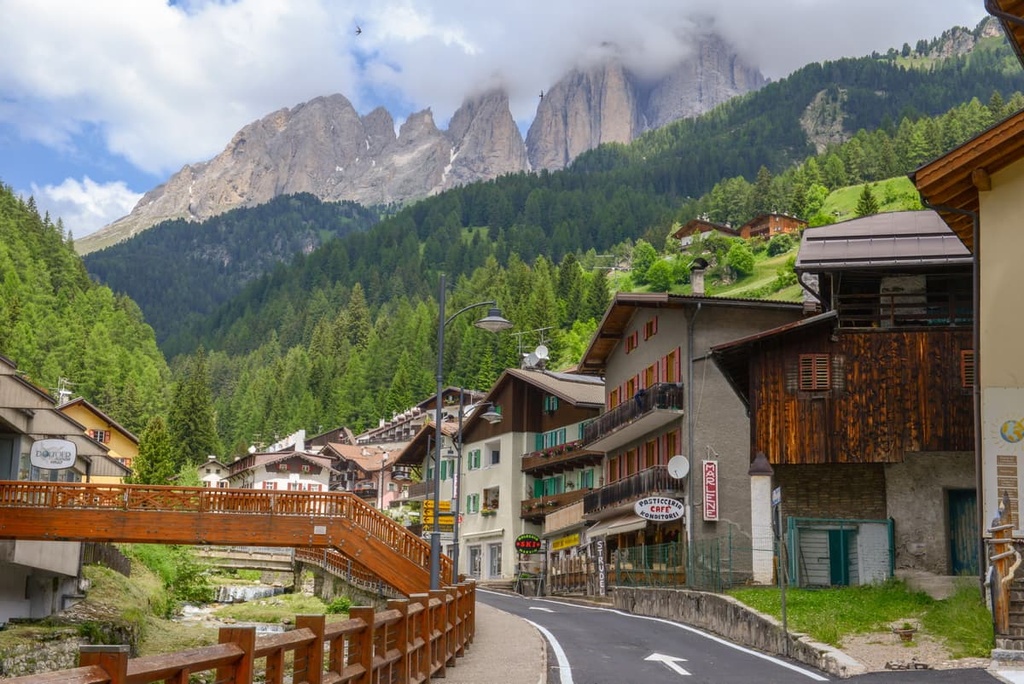 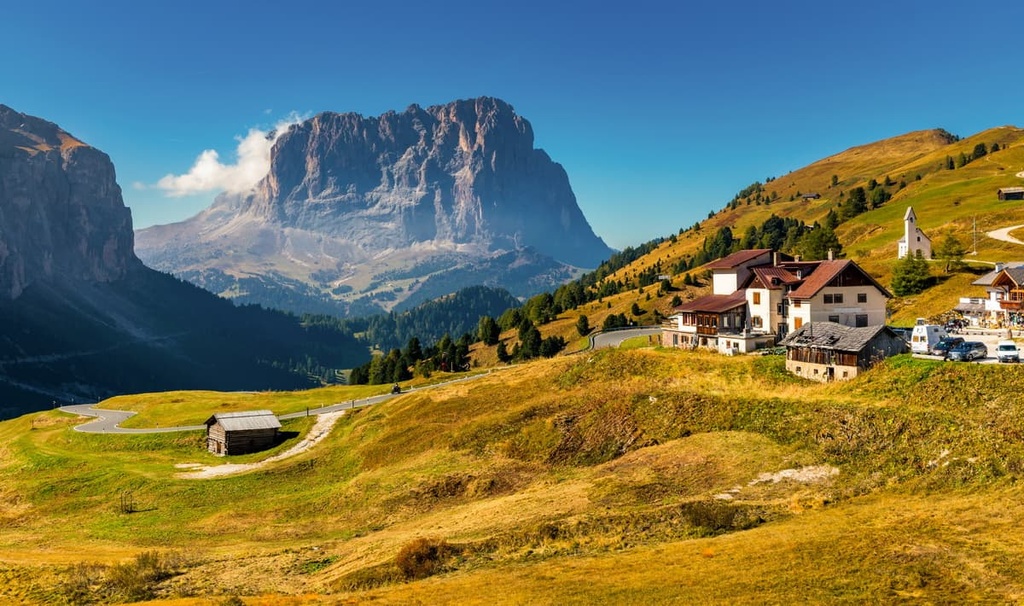 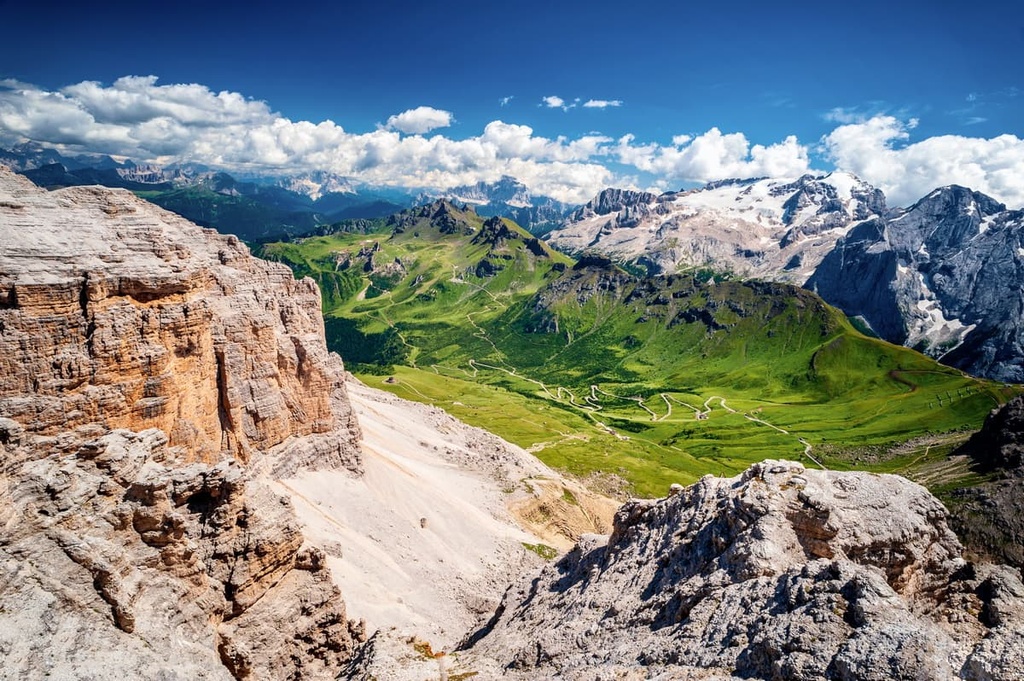 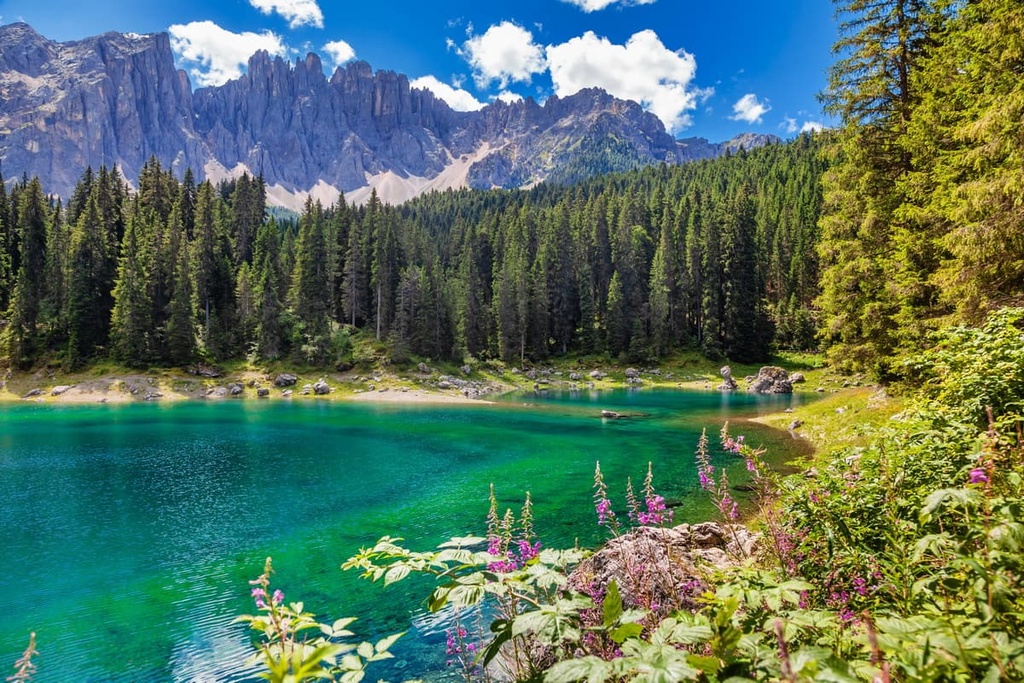 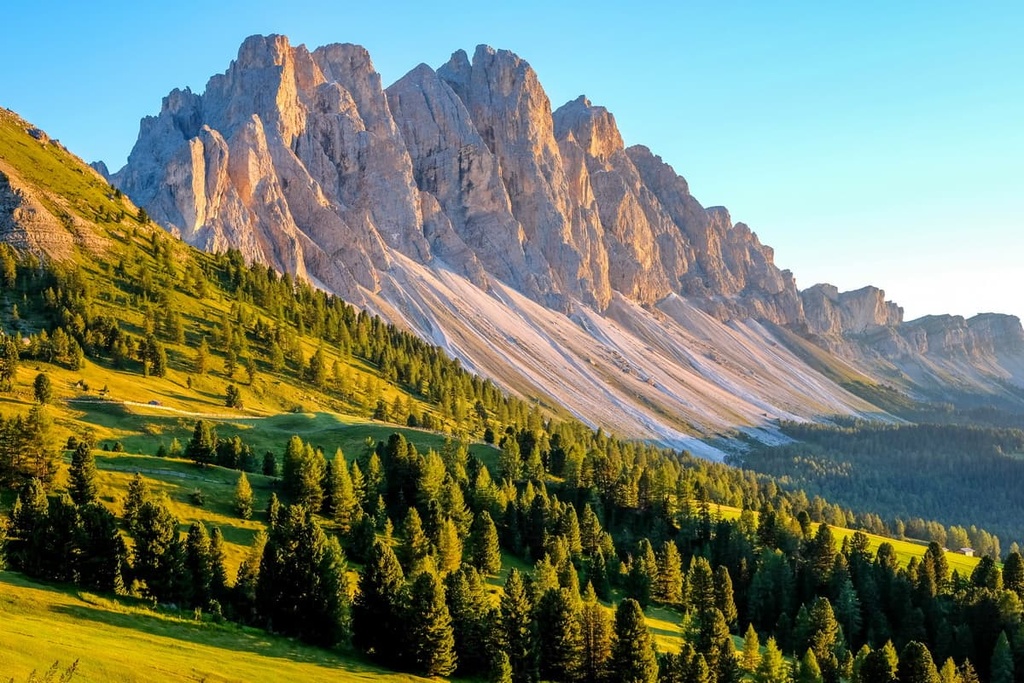 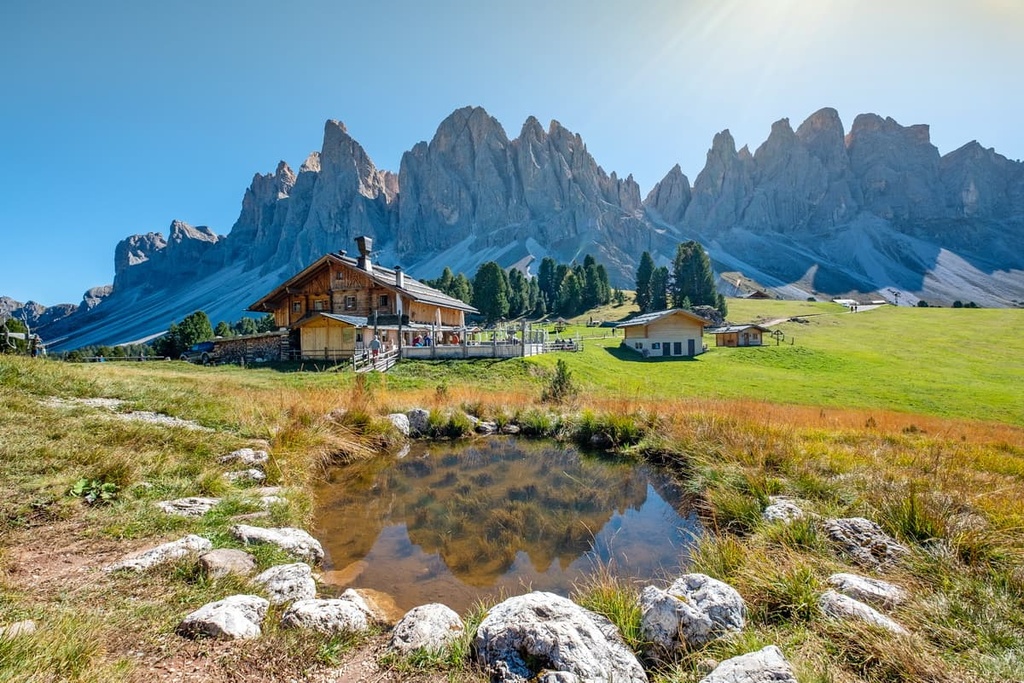 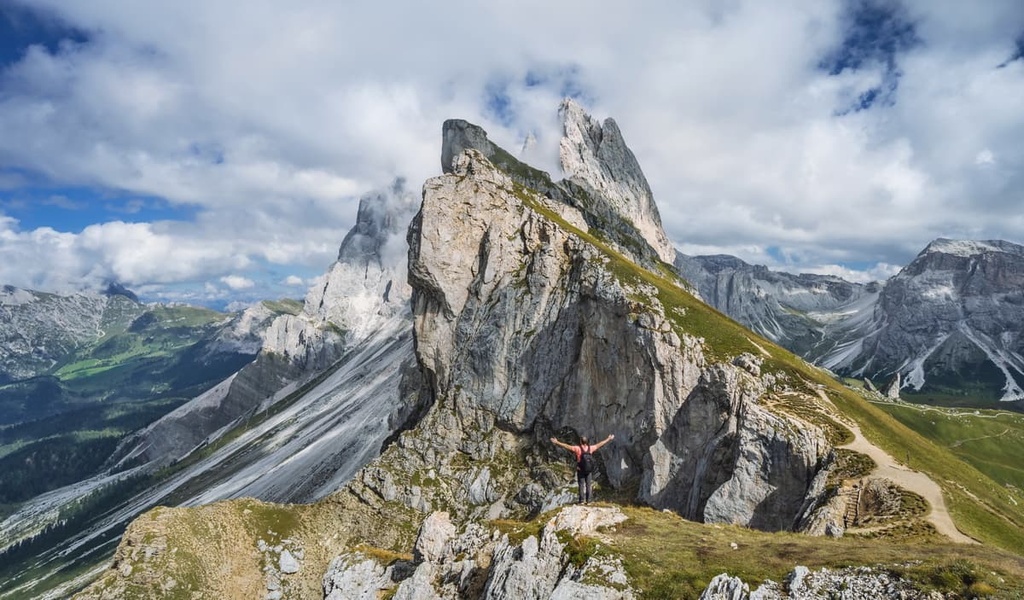