The Eastern Rhaetian Alps are one of the main mountain ranges located in the center of the Alps. The main feature of the range is the Ötztal Alps, one of its three subranges, which includes more than 10 impressive peaks that are above 3,000 m (9,842 ft) in elevation. There are 1944 named mountains in the Eastern Rhaetian Alps, the highest and most prominent of which is Wildspitze (3,768 m / 12,362 ft). 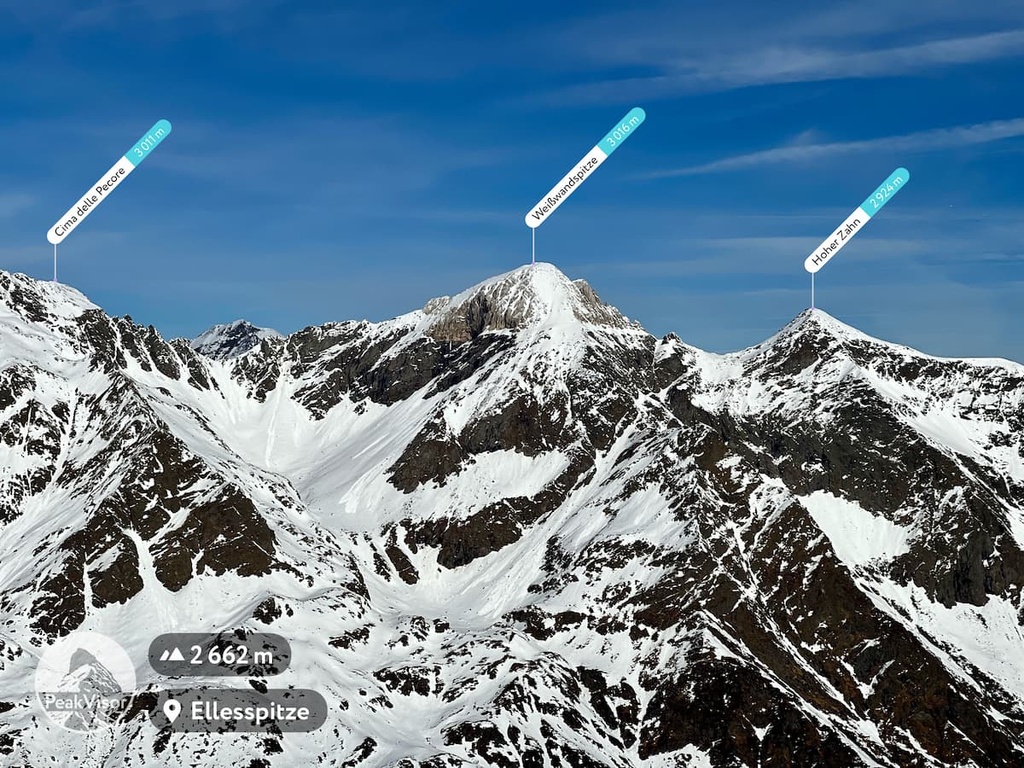 It’s believed that the word ‘Rhaetian’ comes from the name of the Rhaetian people, who were also known as the Rhaeti, Rhaetii, and Rheti. They were a group of Alpine tribes whose culture and language were likely similar, or at least related to, the Etruscans. The Rhaetians historically inhabited what is now northeastern Italy.

The Rhaetic tribes, together with their Celtic-speaking neighbors to the north, the Vindelici, were subjugated by the Imperial Roman army in 15 BCE. Their territories were annexed to the Roman empire and they later became part of the Roman province of Raetia et Vindelicia.

The Rhaetian people spoke the Rhaetic language. However, the etymology of the name Raeti itself isn't clear. Nevertheless, it persists in a number of languages to this day as the name of the range in Italian is Alpi Retiche orientali and in German, it is Östliche Rätische Alpen.

Nowadays, the range is located between two countries: in the western part of Austria (particularly the Tyrol region) and in northern Italy (more specifically, in the province of South Tyrol in the Trentino-Alto Adige / South Tyrol region).

How to Get to Western Rhaetian Alps

The largest cities located in the Western Rhaetian Alps are Innsbruck in Austria and Bolzano in Italy. In turn, Innsbruck is the easiest and fastest to get to from Munich in Germany or by plane directly. Alternatively, you can also get to Bolzano from Verona, where there is also an international airport. Between Verona and Bolzano, you can also travel by train, but between Innsbruck and Munich, your only option is the bus.

The mountains of the Eastern Rhaetian Alps consist primarily of sedimentary rocks such as limestone and dolomite. There are also mica slate, quartz phyllite, and marble, among other rock types, in the range.

The main feature of the landscape of the Eastern Rhaetian Alps is the Ötztal Alps, which is one of its three subranges. It includes more than 10 impressive peaks that are higher than 3,000 m (9,842 ft) in elevation. This includes Wildspitze (3,768 m / 12,362 ft), the highest and the most prominent in the range. It is also the only ultra-prominent mountain in the range.

Beyond Wildspitze, the other nine Ötztal highest mountains include:

The largest valleys found in the range include Inntal, Ötztal, Wipptal, Sarca / Eisacktal, Adige / Etschtal, Passeier, Jaufental, Oberinntal, and Vinschgau. They surround the three mountain groups that make up the region.

The most important and famous pass of the Eastern Rhaetian Alps is the Brenner Pass / Passo del Brennero (1,370 m / 4,495 ft), which separates the province of South Tyrol in Italy and the region of Tyrol in Austria. You can traverse the pass by car on the E45 motorway, which is particularly scenic in winter.

Among different water resources of the range, the main rivers are Austria, Sarca and Adige in Italy. The largest lakes in the ranger are Lago di Resia / Reschensee, Lago di Verano / Vernagt-Stausee in Italy and Gepatschspeicher / Gepatsch-Stausee in Austria.

It is also worth noting that most of the above-mentioned highest peaks are home to glaciers. In total, there are 334 glaciers in the Eastern Rhaetian Alps among 1,937 named mountains, which is a relatively high number.

The Eastern Rhaetian Alps belong to the Central Eastern Alps of the Eastern Alps according to the two most common Alps classifications systems: the Italian SOIUSA and the German-Austrian Alpine Club (AVE).

However, both AVE and SOIUSA argue that the Eastern Rhaetian Alps have the same three subranges, which include:

The main hiking areas in the Eastern Rhaetian Alps are the region's three large nature parks. The first one, Texelgruppe / Gruppo di Tessa Nature Park, is located in South Tyrol northwest of the city of Merano. It is one of eight nature parks in the province.

The other two, Ötztal Nature Park and Kaunergrat Nature Park, are located in the western part of the Tyrol region in Austria, where you can find a total of five nature parks and one national park.

The Texelgruppe / Gruppo di Tessa Nature Park is the largest natural area in South Tyrol. It stretches from Val Senales to Val Passiria and even further to the main Alpine ridge on the border with Austria. It includes the entire Gruppo di Tessa as well as the northern Ötztal Alps and a small part of the Stubai Alps.

Some of the best hikes in the park include:

The Ötztal Nature Park is the second-largest nature park in the Tyrol region in Austria. It features the dense forests, alpine meadows, and rocky landscapes of the Ötztal Alps as well as the neighboring Stubai Alps. The park is also home to 67 glacier-covered peaks.

Some of the best hikes in the park include:

The Kaunergrat Nature Park extends from Inntal Valley into the Ötztal Alps and encompasses the Pitztal and Kaunertal valleys. The park includes 84 peaks that are located above 3,000 m (9,842 ft) in elevation, many of which also feature glaciers. It is also home to a variety of flora and fauna, such as ibex and marmots as well as over 1,000 species of butterflies.

Some of the best hikes in Kaunergrat Nature Park include:

The Eastern Rhaetian Alps, which are located between Austria and Italy, is one of the best places for skiing in both countries. In the Austrian part of the range, there are at least 11 major resorts that offer more than 20 km (12.4 mi) of slopes. Meanwhile, the Italian part of the range is home to five such resorts.

Below, you’ll find a list of the main resorts on both the Austrian and Italian sides of the Eastern Rhaetian Alps as well as the total length of all the trails at each resort.

You can learn more about the ski resorts in Austria (Tyrol) and Italy (Trentino-Alto Adige/Südtirol), including information in real-time about what lifts are open or closed, on the World Mountain Lifts page of PeakVisor.

During your trip to the Eastern Rhaetian Alps, be sure to visit one of the region’s many tourist centers. They are usually found in every town or resort. Here are the two main tourist offices that you can visit in the range’s largest cities:

Hildesheimer Hütte - a mountain hut under the Zuckerhutl mountain

Throughout the Eastern Rhaetian Alps, you will find a huge number of mountain huts, which are the main type of accommodation at higher elevations.

In total, there are more than 170 such huts in Tyrol, of which 26 are located in the Ötztal Alps and 19 of which are situated in the Stubai Alps. Most of them are run by the Austrian Alpine Club, with a few exceptions.

In Italy, the huts are also managed by the Italian Alpine Club but also other organizations and private owners. In total, there are at least 90 major huts in South Tyrol.

The hut in the range with the lowest elevation is Talhütte Zwieselstein (1,472 m / 4,829 ft). It is a self-catered hut located between Sölden and Gurgl.

According to my observations, many huts in South Tyrol are characterized by their unusual modern architecture, such as the Refuge Stettiner Hütte. This makes them attractions in their own right that are made all the more spectacular by the magnificent scenery that surrounds them.

You can also search for more accommodation options in the East Rhaetian Alps using PeakVisor’s 3D Map on the website or in the app.

As with the other mountain ranges in the Alps, the main towns of the Eastern Rhaetian Alps are located on its borders: Innsbruck in Austria and Bolzano in Italy.

If you’re looking for smaller towns and villages for your stay, consider one of the towns located just outside Innsbruck and Bolzano. Alternatively, venture to one of the resorts that are located deep within the mountains.

If you’re traveling from Innsbruck, some of the best small towns include Telfs, Imst, Landeck, Fulpmes, Neustift im Stubaital, and Steinach am Brener. Good alternatives to Bolzano include Merano, Klausen / Chiusa, Brixen / Bressanone, and Sterzing / Vipiteno. 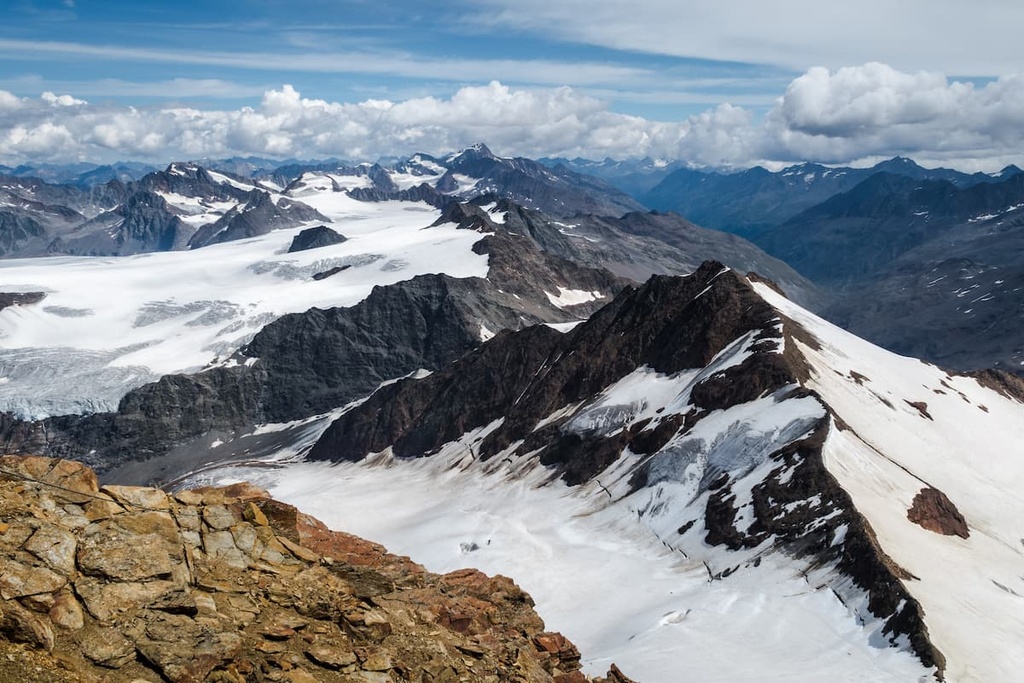 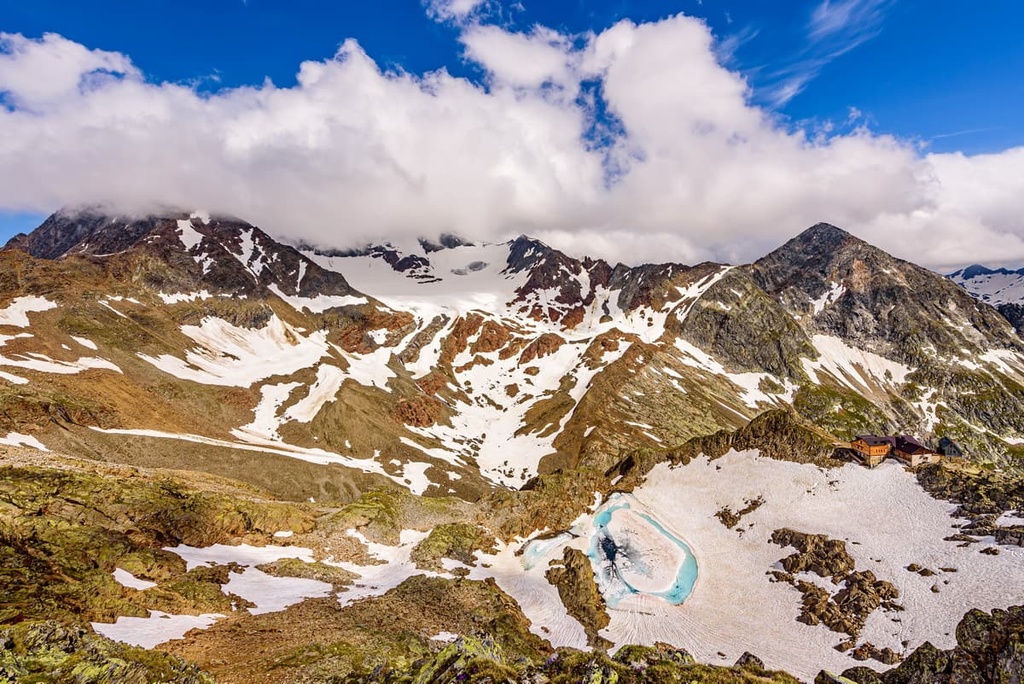 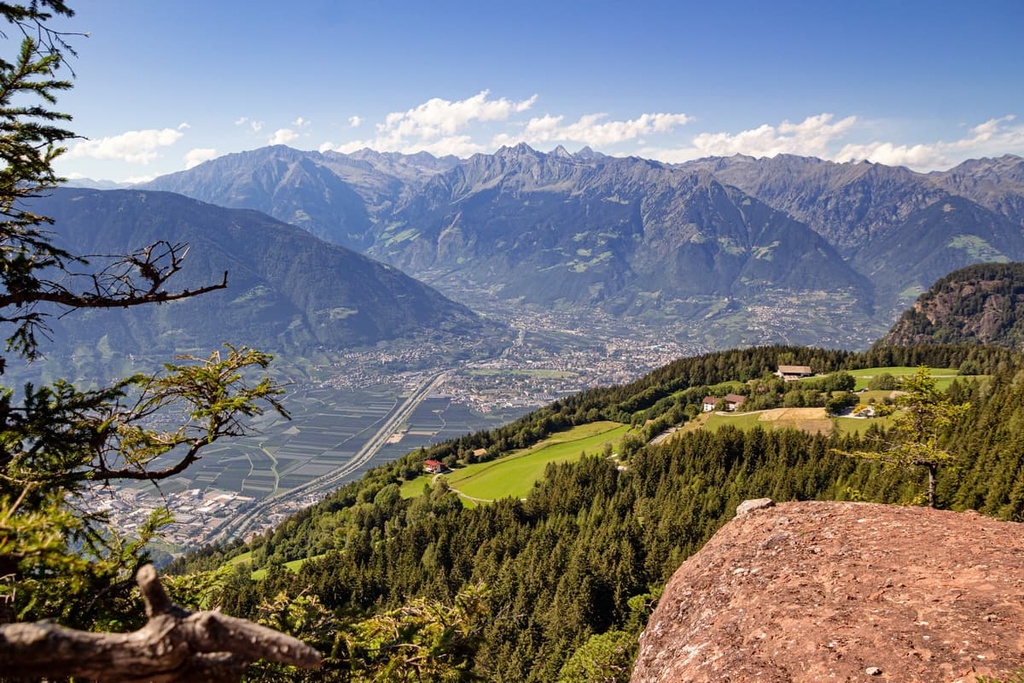 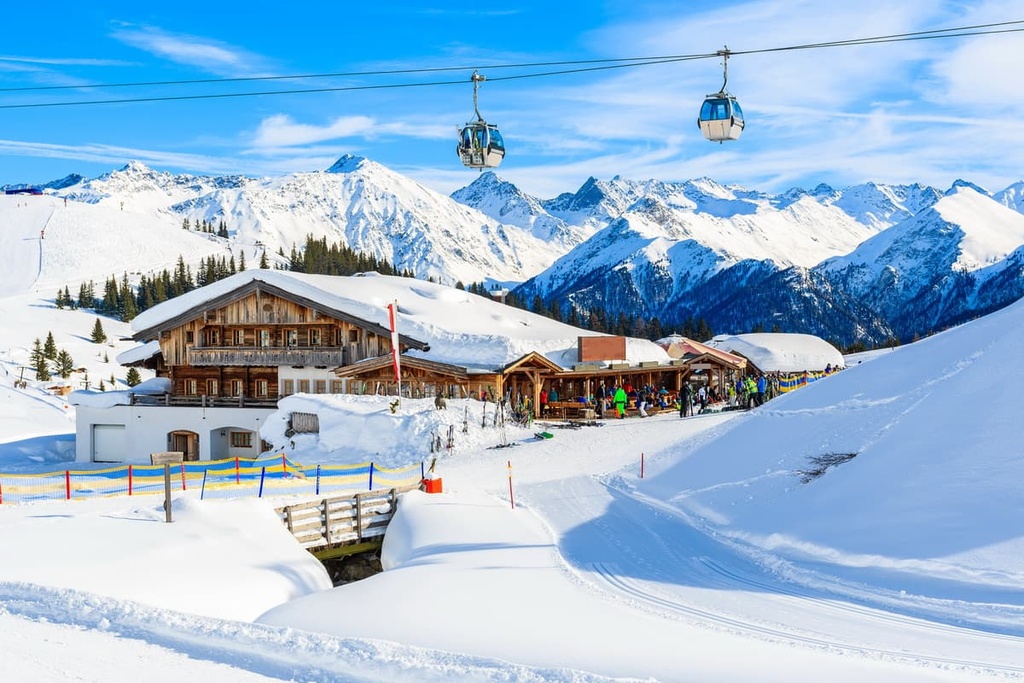 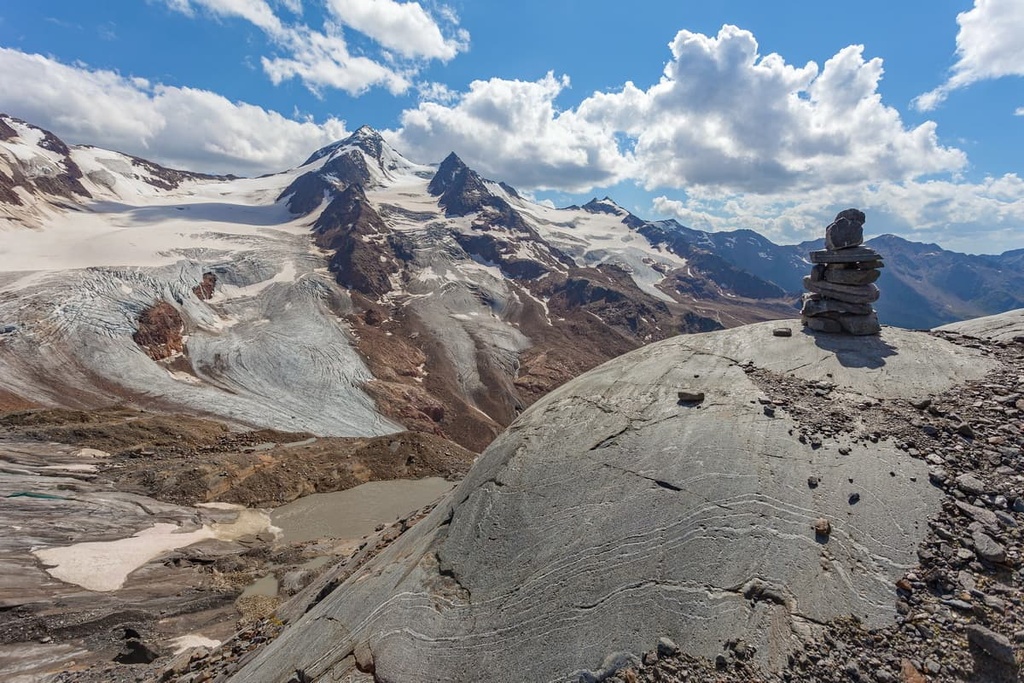 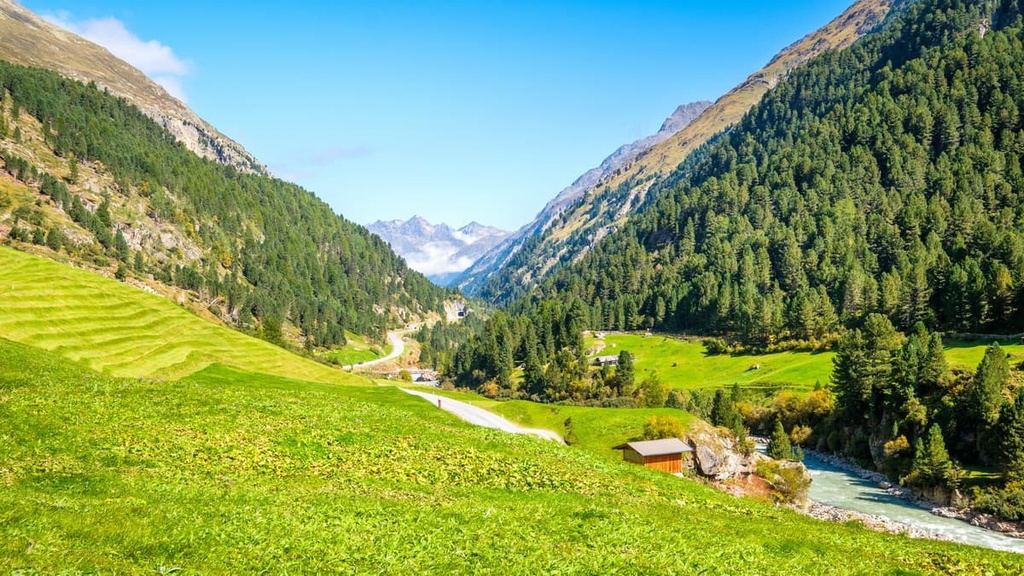 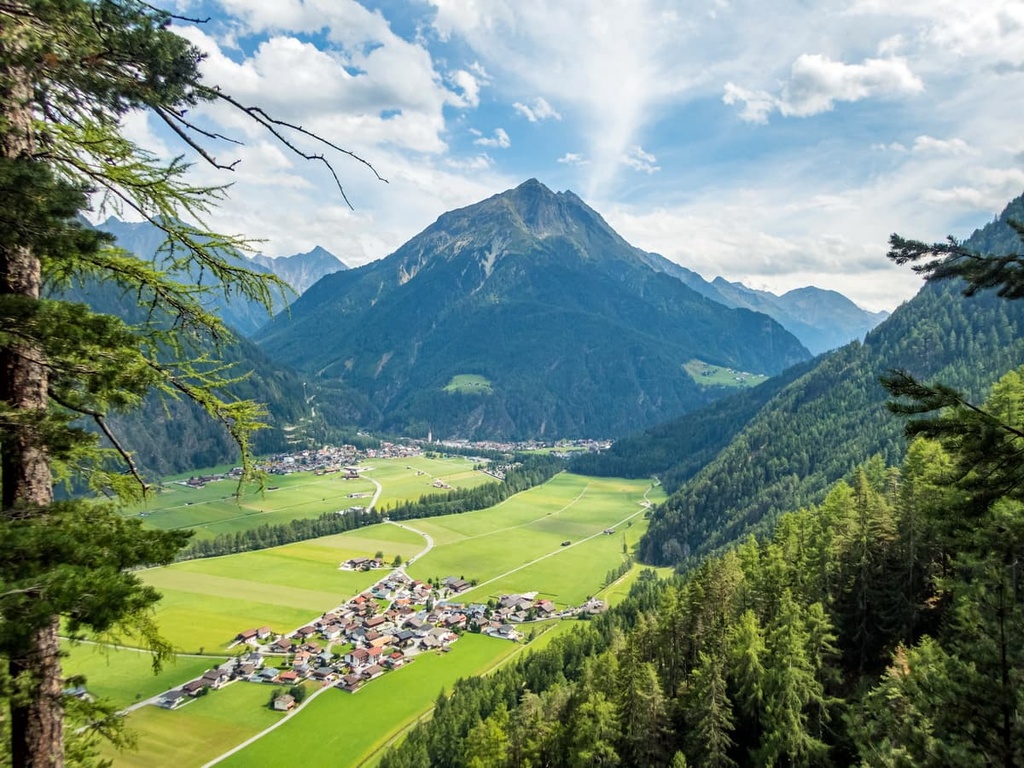 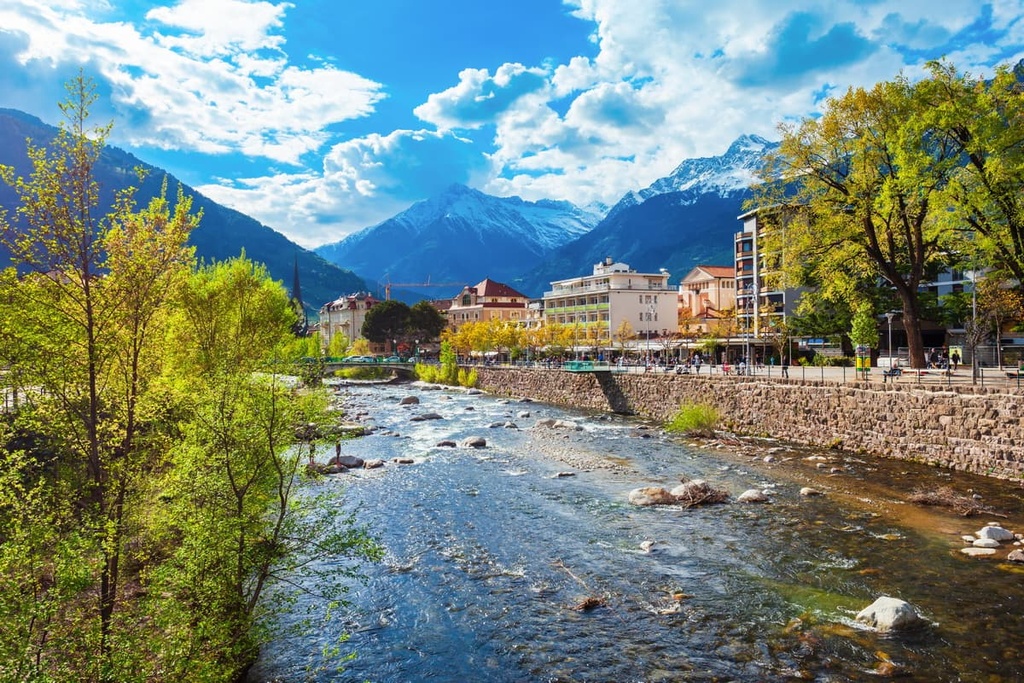