Situated in the Southern Rhaetian Alps of north-central Italy, Adamello Regional Park (Parco Regionale dell’Adamello) is a popular hiking destination that’s known for its stunning mountains and rich history. The park is located in the northeastern part of the province of Brescia in the Lombardy region. There are 255 named mountains in the park, the highest and most prominent of which is Monte Adamello (3,539 m/11,611 ft). 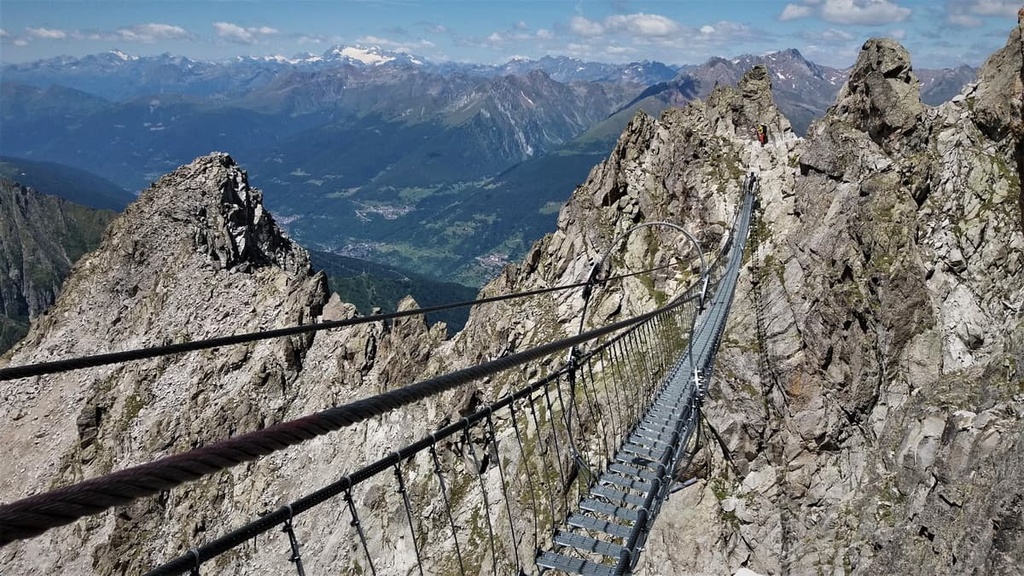 Established in 1973, Adamello Regional Park (Parco Regionale dell'Adamello) is a protected area located in the province of Brescia in the northern Italian region of Lombardy. The park encompasses 510 sq. km (197 sq. mi) of land across 19 different municipalities.

From north to south, the park extends from Passo del Tonale to Passo di Crocedomini.

To the east, the park’s borders mimic that of the regional border between Lombardy and Trentino, whereas to the west the border remains above the left bank of the Oglio River.

To the east, the park is flanked by the Adamello-Brenta Park, and to the north, it borders Stelvio National Park, which is located adjacent to Swiss National Park in the canton of Grisons in Switzerland.

Combined, these parks form the largest protected area in the Alps, with a total area of around 2,500 sq. km (965 sq. mi). The Adamello Regional Park encompasses the southern tip of this multinational protected region.

The topography of Adamello Regional Park is characterized by peaks, ridges, and mountains that dominate the various valleys throughout the area.

The mountains of Adamello Regional Park have been shaped and molded by millenia of glacial movement and subsequent erosion. Over time, heat and pressure metamorphosed many of the rocks in the area, turning limestone into marble and other sedimentary rocks into their metamorphic counterparts.

The ridges and mountain chains found in the regional park branch off from the central glaciers and plateau of the Adamello-Presanella Alps. They are further divided into the Baitone, Frisozzo, and Blumone subgroups. The Adamello Group is also home to the Adamello Glacier, which is among the largest glaciers in the Italian Alps.

Nestled in the heart of the Alps, Adamello Regional Park is home to typical Alpine flora and fauna that you can see and appreciate all year long. Spring and summer are the best times of year for visitors to make the most of the Alpine blooms in the vast meadows populating the park.

With that in mind, here’s a quick overview of the flora and fauna found in Adamello Regional Park.

Higher up the valleys, shrubs such as rhododendron and juniper coexist with green alder, willow, and mountain pine. Higher still, toward the 2,300 m (7,545 ft) mark, alpine meadows dotted with gentians, saxifrage, soldanella, and edelweiss reign supreme.

From here, mosses and lichens begin to appear and continue until the snow line, where alpine chrysanthemum and glacier buttercups grow. Endemic species found in the park include Primula daonensis, Campanula raineri, Cypripedium calceolus, Saxifraga vandellii, and Linaria alpina.

Fauna in the park includes the Alpine ibex, which has recently been reintroduced to the region. You can often see Alpine ibex in Val Malga di Sonico, Val Salarno, Valle Adamè, and in Volano and Zumella.

A few herds of chamois also live in the park above the tree level, whereas roe deer and red deer make the deciduous woods and clearings of the region their home.

Other mammals living in the park include Alpine hares, weasels, marmots, foxes, beech martens, squirrels, and dormice. Brown bears have also recently been spotted in the park, and the park is part of an ongoing project to monitor the repopulation of both the brown bear and gray wolf in the area.

There are numerous bird species to spot in the park, too, such as black grouse, green and great spotted woodpeckers, rock partridges, ptarmigans, sparrow hawks, buzzards, kestrels, and golden eagles.

Reptiles and amphibians that have made the park their home include newts, black and spotted salamanders, toads, mountain frogs, common vipers, and green lizards.

Human activity in Adamello Regional Park has been recorded as far back as prehistoric times. There are many examples of rock engravings that can be found throughout the area, along with axes made of polished stone.

There are also many examples of rural Alpine architecture that are partially preserved in the region to this day. The depopulation of the region has caused gradual abandonment of traditional agricultural activity in the area and subsequent degradation of its historical-cultural heritage. The park is, however, now working on recovering and enhancing its cultural history.

During World War I, on the Austrian-Italian front, the Allied Powers and the Central Powers were forced to battle at high elevations on the border across the two mountain ranges of Ortles-Cevedale and Adamello-Presanella in order to gain access to Tonale Pass.

The war was fought at elevations above 3,000 m (9,842 ft) on ice and snow in extremely difficult conditions. These battles along the Italian Front came to be known as the “White War” due to the difficult conditions, which included freezing temperatures that dropped as low as -25°C (-13°F) at night.

Adamello Regional Park is also the site of two large hydroelectric plants based in San Fiorano and Edolo. Dams were built in the basins of Lake Arno and Lake Baitone to contain the water in the park for both of these plants.

Visitors will find almost 1,000 km (620 mi) of footpaths in Adamello Regional Park and 25 rifugios for overnight stays during their adventures. Within the park, there’s a mix of more casual paths for families to enjoy strolling along, as well as more demanding routes for experienced hikers.

Family-friendly trails in the park include the road connecting Passo Tonale to Ponte di Legno and the trail leading walkers from Edolo to the Mu Woods. The park is also bike-friendly as there are plenty of nature bike trails and a cycleway along the Oglio River for visitors to enjoy.

The hike to rifugio Tonolini is an easy and peaceful walk with beautiful views over Lake Baitone and across the valley. This route starts in the parking lot at Val Malga, which you can get to from Sonico.

From the parking lot, take path n. 13, which climbs steeply through fir and birch woods up towards rifugio Baitone. From here, follow path n. 13 until it reaches path n. 48, which takes you up to rifugio Tonolini.

This panoramic 4-hour long loop route called the Flower Path (Sentiero dei Fiori) retraces the steps of the White War, which was fought along the current Italian-Austrian border.

The Alta Via dell’Adamello crosses the park from north to south. The route includes several via ferrata routes along the way, so mountaineering gear and experience are necessary to tackle this trail. There are also mountain guides available in the region to accompany anyone without the necessary experience to complete this hike on their own.

The route is a little over 50 km (30 mi) long, and it crosses the different environments in the park. Along the path, you’ll also come across remains of military settlements from the First World War, such as trenches, walls, and caves.

There are many small towns, hotels, and rifugios located in and around Adamello Regional Park for visitors to enjoy, from Ponte di Legno to Breno. Here are a couple of the best cities and towns to check out when visiting the park.

A small mountain town in Val Camonica, Ponte di Legno is a popular skiing destination during the winter months. In the summer, the town buzzes with activity from hikers and families looking to escape the heat elsewhere in Italy.

There are plenty of hiking options around Ponte di Legno, including in the nearby Adamello Regional Park, Stelvio National Park, and Adamello Brenta Nature Park. Ponte di Legno is also very family-friendly, as it is home to adventure parks and wildlife areas to keep kids entertained.

Located on the shores of its namesake lake, Iseo is a beautiful small town that’s situated around an hour’s drive away from Adamello Regional Park. In town, you can enjoy strolling around the lakeside or you can hop on a ferry to Monte Isola and walk up to the Madonna della Ceriola Sanctuary.

There are plenty of hikes around Lake Iseo to enjoy during your stay as well as water activities such as kayaking that you can participate in on the lake itself. Iseo is also part of Italy’s Franciacorta wine region, so it’s well worth stopping by one of the region’s many local vineyards for an afternoon of wine tasting if you have some free time.

Although it’s not exactly located close to the park, Bergamo is the largest city in the area and it is home to the region’s primary international airport. From Bergamo, you can enjoy the nearby Bergamasque Alps and Prealps to the north or head northeast toward Adamello Regional Park.

The city itself is worth a stop in its own right, particularly Bergamo Alta, which is the old part of the city that’s perched on a hill. In Bergamo Alta, you can walk through charming cobbled streets and enjoy a meal in one of the old town’s many delicious restaurants. 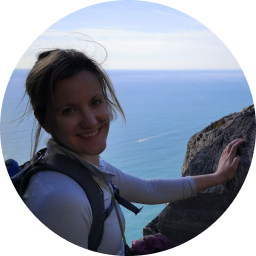 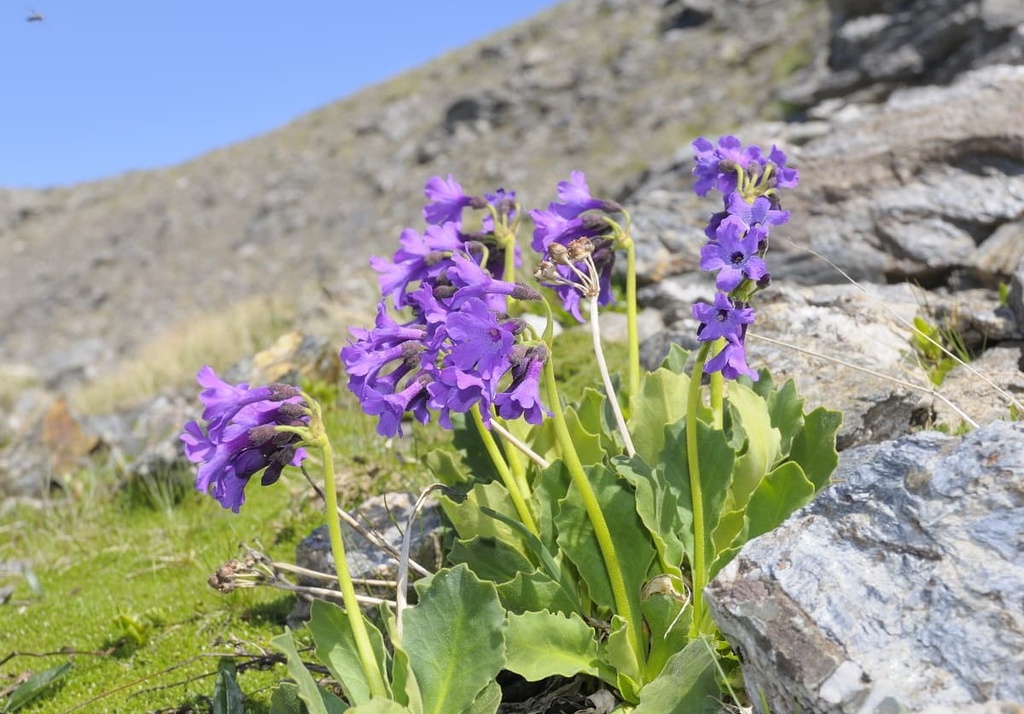 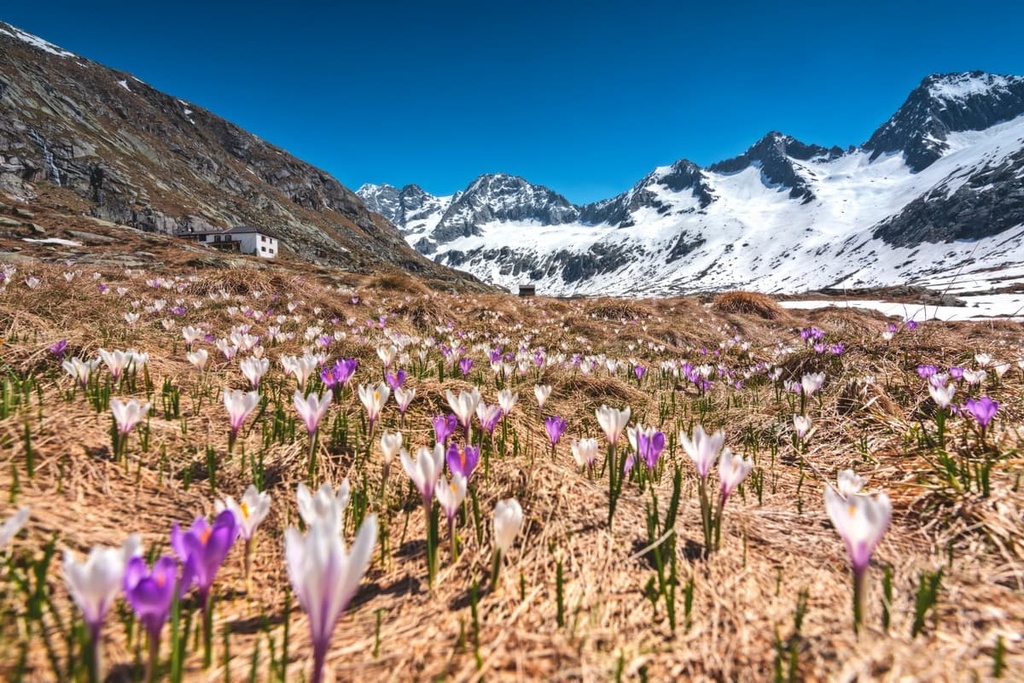 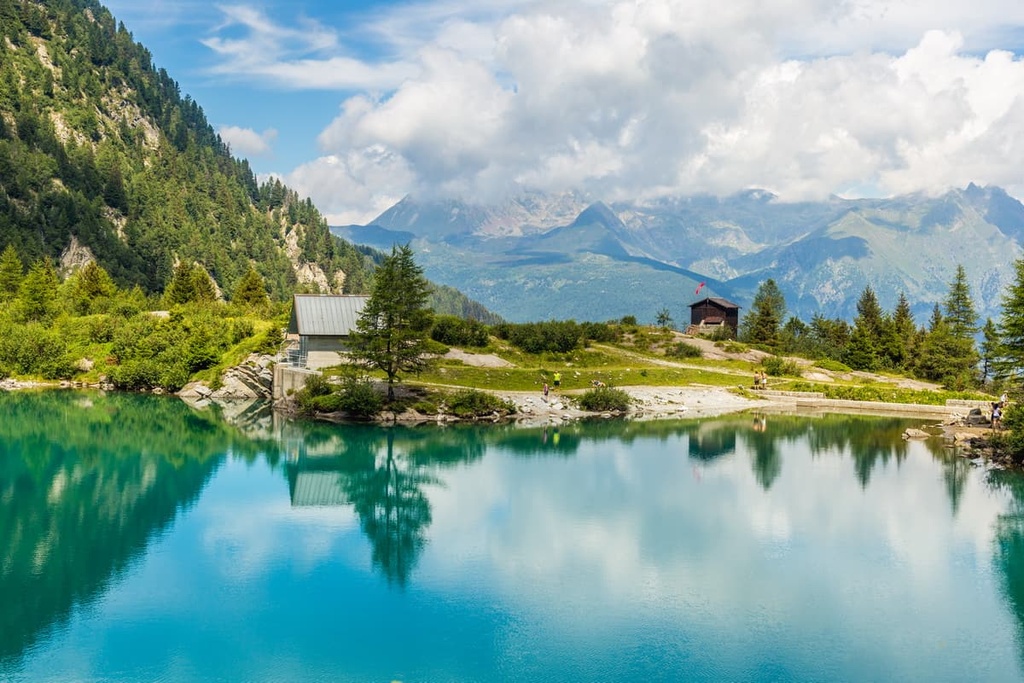 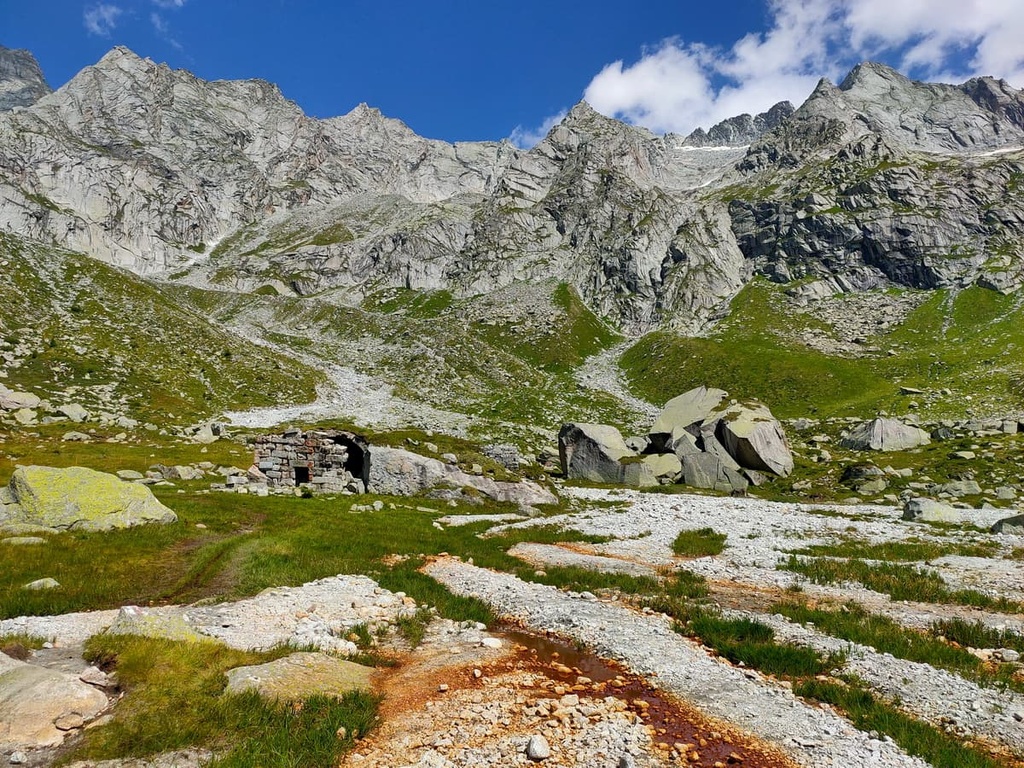 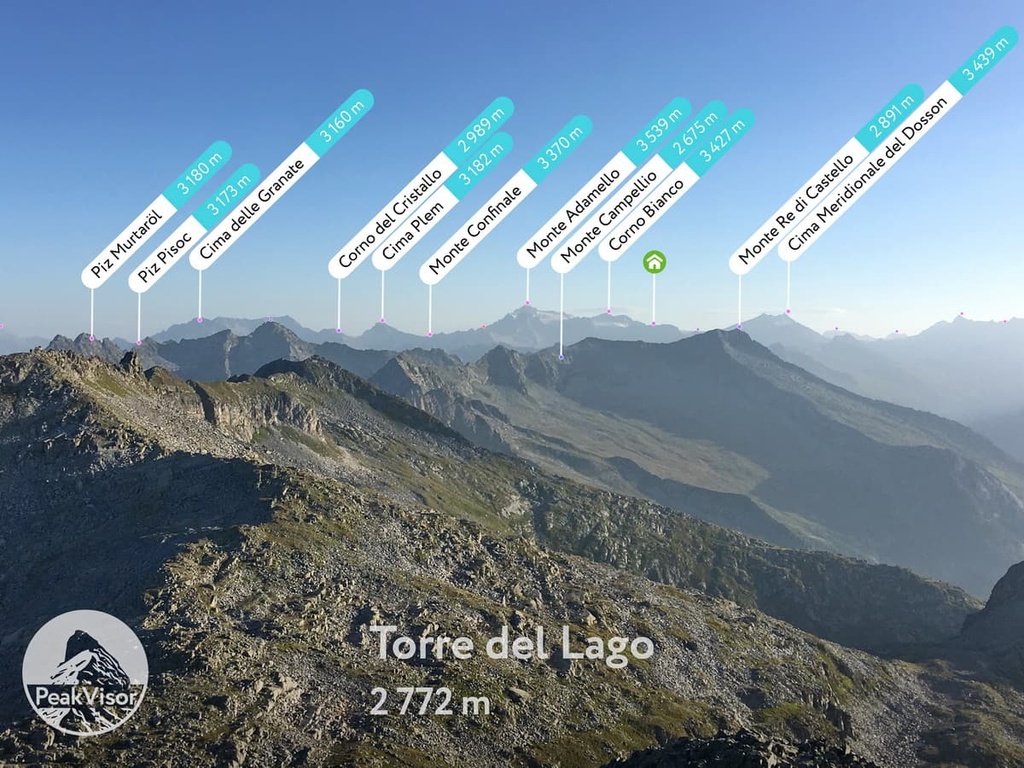 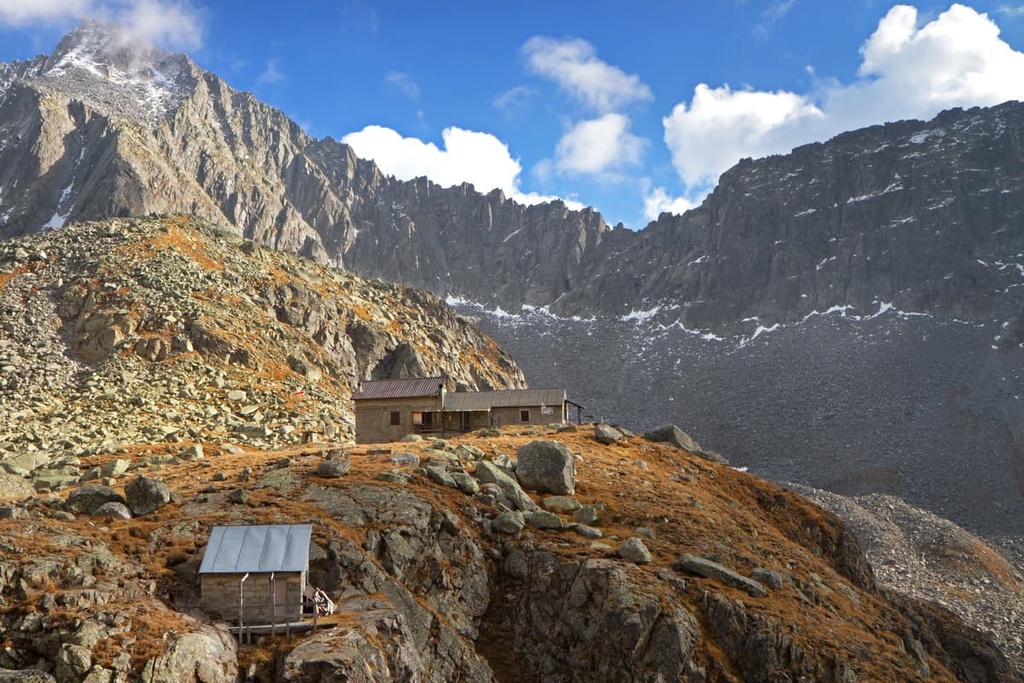