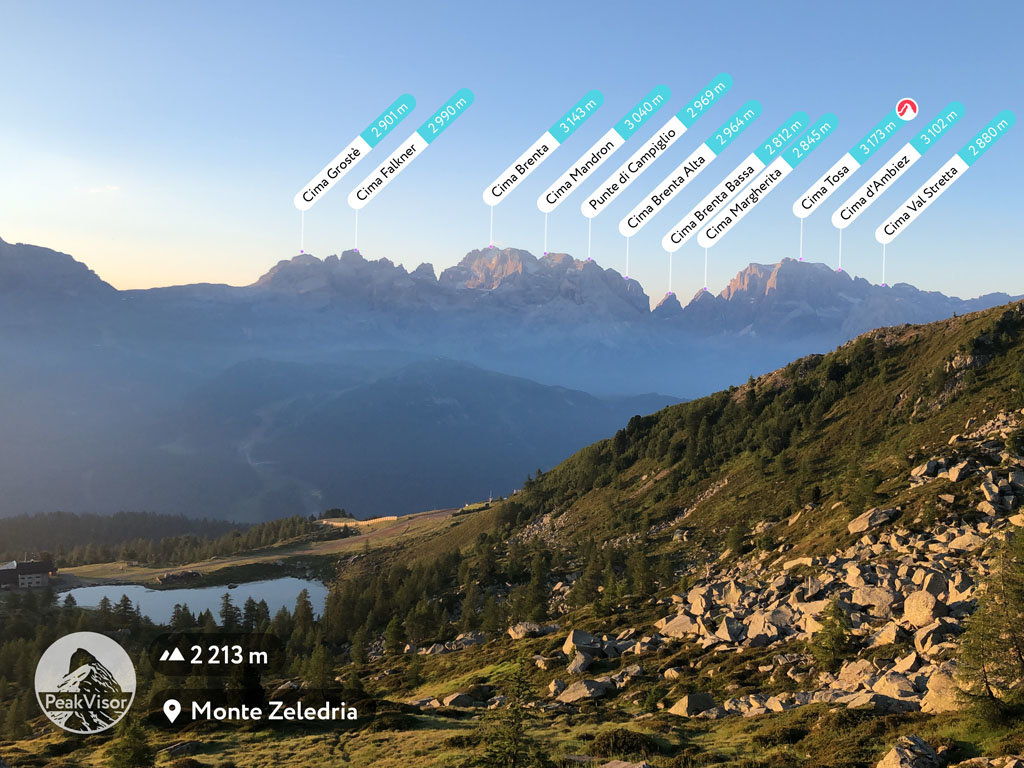 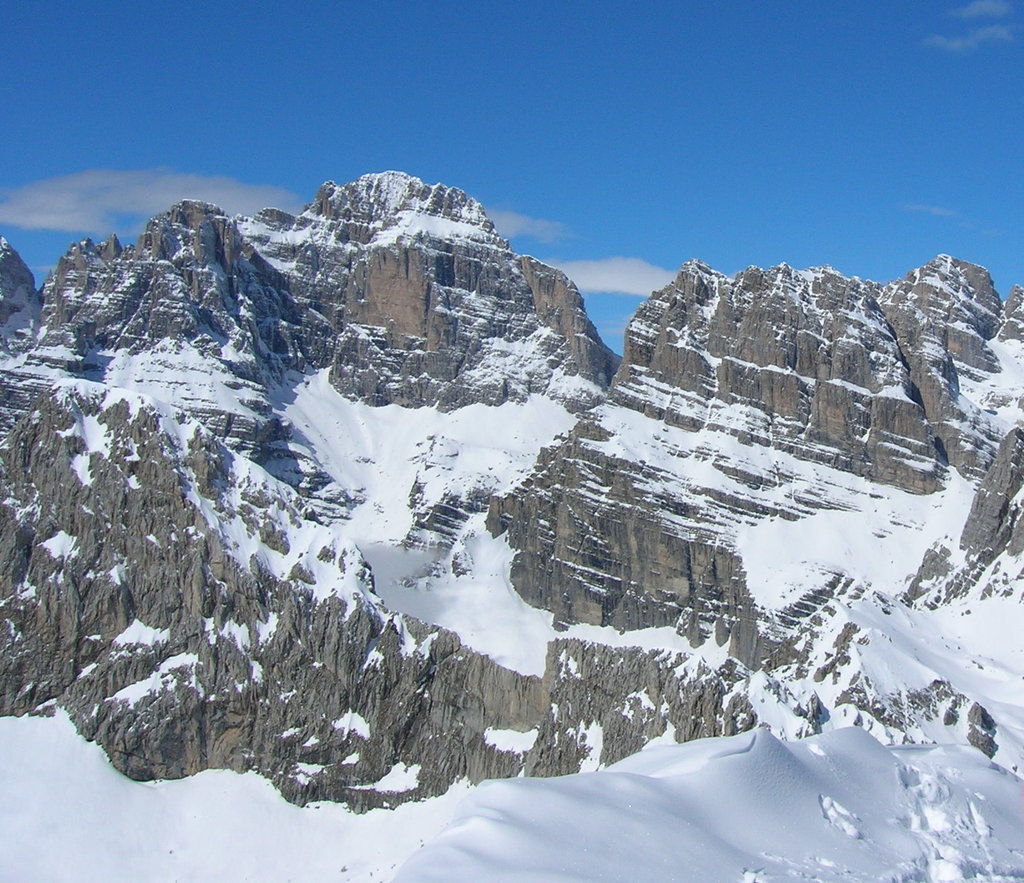 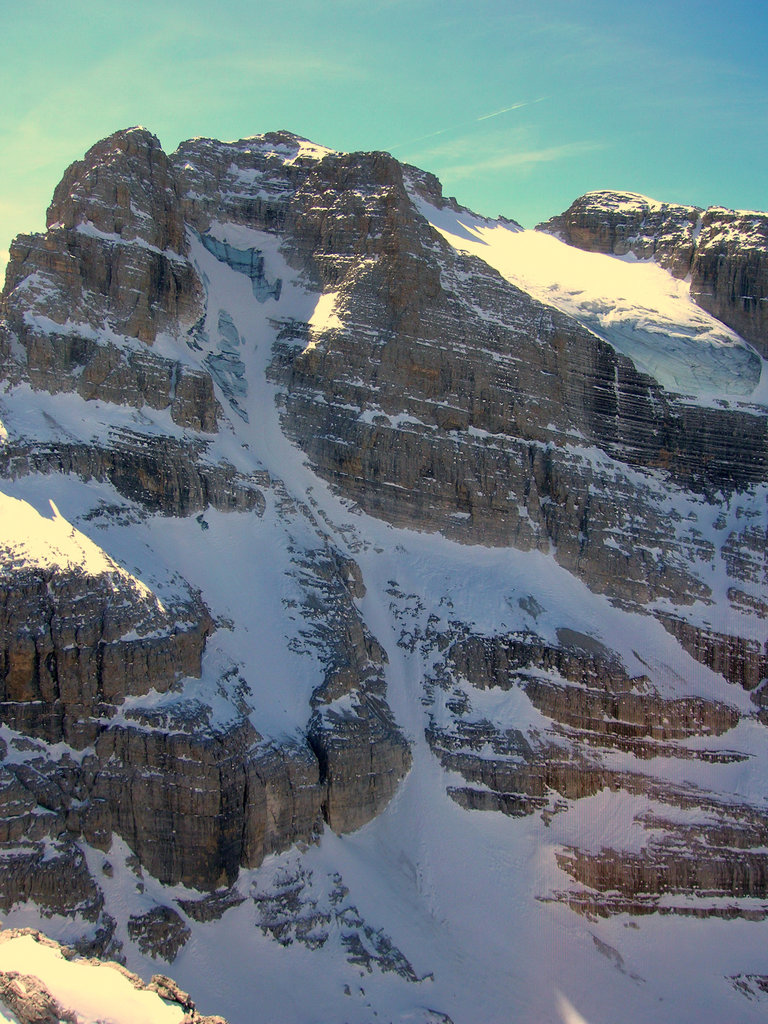 Show 3 photos
Add photo
3 151 m
Elevation
Elevation is the altitude of a place
above sea level.

1 502 m
Prominence
Peak’s prominence is the least
vertical to be covered to get from the
summit to any other higher terrain.

Cima Brenta is a mountain in the Brenta group (It.: Dolomiti di Brenta), a subgroup of the Rhaetian Alps in the Italian Region of Trentino-Alto Adige, with a reported height of 3,150 metres (10,330 ft). The mountain rises imposingly up between the rock towers and pinnacles of the central Brenta Group. A sharp ridge connects the mountain on its southern side to the Spallone die Massodi. The northern ridge steeply descends towards Bocca del Tuckett. Towards north west a slender couloir descends all the way from the top towards the Vedretta di Brenta Inferiore, the mountain's 'lower' glacier. Large shouldering formations extend towards the west, culminating in the Cima Mandrone and the Punti di Campiglio, and northwest, culminating in the Cima Massari. Above these formations a glacier, the Vedretta di Brenta Superiore, the 'upper' glacier descends the mountain, being cut off by a vertical precipice over the Vedretta di Brenta Inferiore. On the eastern side the mountain rises up with an imposing 700-meter high vertical rock face with on its left side a distinct orange-like color. Above this lies a horizontal ledge, the Cengia Garbari, on which the Via delle Bocchette Alte proceeds. The actual mountain has two summits that are some 250 meters apart, of which the eastern top reaches the highest altitude. The glaciers, vedrette, have been shrinking steadily over the last decades as a result of climate change.

The historical name Cima Brenta was not always as evident as it is today. The toponymy of these parts was largely established by Nepomuceno Bolognini. The mountain, somehow, became a place where nationalistic sentiments were demonstrated. In 1889 the Austro-Hungarian authorities decided to rename the mountain to Kaiser Franz Josef-Spitze. The name never caught on -not even in German literature. When the occasion occurred to raise a large yellow-black imperial flag on the summit, fully visible from Val Rendena as well as from Molveno, local guide Giuseppe 'Bepaccia' Zeni and some companions climbed the mountain to take it down. In 1912, on the other hand, the Italian flag was hoisted by irredentists on Cima Brenta, deliberately just before the first snow fall, so that the flag remained visible until the next summer. Around 1953 electricity company SISM, predecessor of ENEL proposed to build a cable car trajectory from Molveno to the top of Cima Brenta. The plans were abandoned and in 1967 the mountain became protected as part of the Parco Naturale Adamello-Brenta.
The nearest mountain hut is Rifugio Alimonta located 868m/2 848ft SW of the summit.