Featuring glistening alpine lakes, sprawling meadows, jagged peaks, and nearly 4 dozen active glaciers, the Fitzpatrick Wilderness Area in the US state of Wyoming is a sure bet for remote mountain adventures. The wilderness contains 45 named mountains, the highest and most prominent of which is Gannett Peak (13,779ft/ 4,206m), the tallest peak in Wyoming. 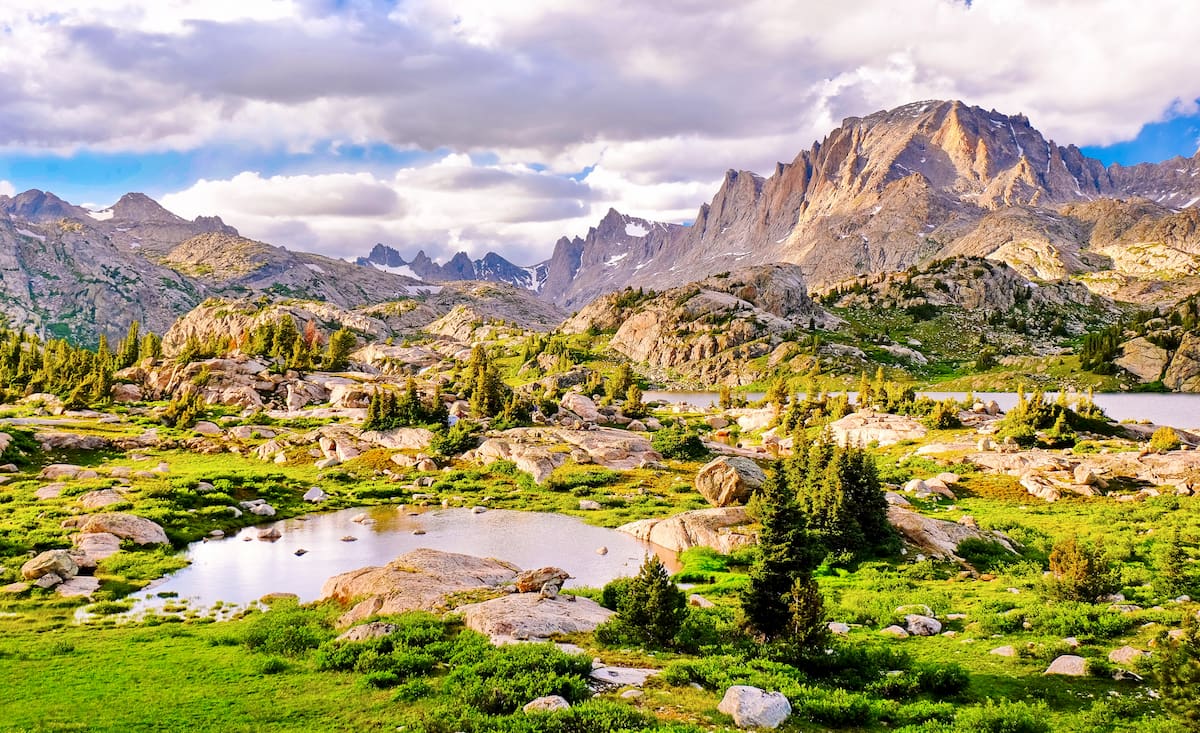 The Fitzpatrick Wilderness is a federally-protected area in the west-central part of the US state of Wyoming. It covers an area of some 198,525 acres (80,340 ha) within Fremont and Sublette counties and it is located within one of the most mountainous parts of the state.

As part of the Shoshone National Forest, the Fitzpatrick Wilderness Area is surrounded by mountain ranges and other wildernesses. Indeed, it is situated within a major complex of public lands that covers much of northwestern Wyoming, eastern Idaho, and southern Montana.

Moreover, the wilderness is bordered to the east by the Wind River Reservation of the Eastern Shoshone Tribe and the Northern Arapaho Tribe. However, although it is possible to enter the Fitzpatrick Wilderness from the Wind River Reservation, any wishing to travel on tribal lands for recreation must get permission and secure a permit from the Shoshone & Arapaho Tribes Fish & Game.

At the heart of the Fitzpatrick Wilderness lies the Wind River Range, a long chain of peaks that runs for some 100 miles (160km) from northeast to southeast in the west-central part of Wyoming. The range borders the Absaroka Range to the north and it is part of the Greater Yellowstone Rockies, which encompass a wide swath of both Wyoming and Montana.

For the most part, the Wind River Range is composed of the remains of an ancient and very large granite batholith. This batholith started to form deep under the surface of the Earth some 1 billion years ago. During the Laramide orogeny some 80 to 55 million years ago, the batholith began a long period of uplift, which helped create the mountains that we see today.

However, the specific landforms that exist in the region, including its many cirques, valleys, and alpine lakes, are actually the result of widespread glaciation which once covered the range. Indeed, the Fitzpatrick Wilderness is still home to some 44 named glaciers which are remnants of this Pleistocene glaciation.

The majority of the wilderness’ glaciers are situated around Gannett Peak, which itself is surrounded by quite a bit of ice. Glaciers near Gannett Peak include the Gooseneck Glacier, the Minor Glacier, and the Gannett Glacier. Other nearby glaciated peaks include Mount Arrowhead, Winifred Peak, Mount Helen, Fremont Peak, Jackson Peak, Turret Peak, Sunbeam Peak, Mount Koven, and Mount Sacagawea.

Like the rest of the Shoshone National Forest, the Fitzpatrick Wilderness is home to some stunning forests and a diversity of flora and fauna. The wilderness is part of a large region known as the Greater Yellowstone Ecosystem, which itself is one of the largest remaining (mostly) intact temperate ecosystems left on the planet at about 22 million acres (8.9 million hectares) in size.

The Fitzpatrick Wilderness contains a number of different plant communities that vary from place to place based on elevation.

Within the lowest elevation regions of the wilderness, the region is mostly sagebrush and grasslands. Moving slightly higher up in elevation, the Fitzpatrick Wilderness shifts toward woodlands of quaking aspen, lodgepole pine, and Rocky Mountain juniper.

Eventually, these woodlands give way to coniferous forests typical of the Wind River Range, which include large stands of Engelmann spruce, subalpine fir, limber pine, and whitebark pine. Above the timberline, the Fitzpatrick Wilderness is dominated by fantastic alpine meadows, talus fields, snow slopes, and glaciers. The wilderness’ alpine meadows are particularly great in midsummer when the region’s wildflowers are in bloom

If you’re interested in fly fishing, the Fitzpatrick Wilderness doesn’t disappoint. With your Wyoming fishing license in hand, you can cast your lines in the hopes of snagging a number of different species, including rainbow trout, brown trout, and brook trout.

The region that is now the Fitzpatrick Wilderness has a long and steroid history of human inhabitation that dates back thousands of years.

Even though it’s now called a wilderness, the region in and around the wilderness is part of the ancestral homelands and traditional territories of many Indigenous peoples. These include the Eastern Shoshone Tribe, the Northern Cheyenne Tribe, the Crow Tribe (Apsáalooke), and the Northern Arapaho Tribe, among others.

Although the Lewis and Clark Expedition did not travel through the region that is now the Fitzpatrick Wilderness, one of their group, John Colter, did travel around the area after setting off on his own during the expedition’s homeward journey.

While it’s not entirely clear how far south he traveled, Colter did become the first American of European descent to visit the Absaroka Range as well as the land that would later become Grand Teton and Yellowstone National Parks. He also is believed to have crossed the Continental Divide at Togwotee Pass in the Absarokas, though it’s possible that he crossed Union Pass in the Wind River Range, instead.

The English-language name “Fitzpatrick Wilderness,” however, comes not from Colter’s travels through the area, but from those of Jim Bridger. Bridger was a fur trapper and “mountain man” who was known to have traveled extensively throughout western Wyoming during the mid-19th century. The wilderness is named after Bridger’s occasional partner in the mountains, Thomas Fitzpatrick, who was also a guide for John C. Frémont’s second expedition.

Like the rest of this part of Wyoming, the forests and lands of the Greater Yellowstone Region became particularly important to settlers and immigrants from the eastern United States, who came in search of agricultural land, mining prospects, and timber. In particular, lumber became a crucial resource in the region as railroad companies sought raw materials to create rail ties for their train tracks.

Much of the region was initially protected as part of the Yellowstone Timberland Reserve in 1891. The reserve was created in after then-future President Theodore Roosevelt visited the area in the 1880s and was reportedly impressed by its natural beauty. Over 2 decades later, after the US Forest Service was established in 1905, the reserve was renamed Shoshone National Forest and it became the first national forest in the country.

Although some of its neighbors, including the Washakie Wilderness and the North Absaroka Wilderness, were established as a result of the 1964 Wilderness Act, the Fitzpatrick Wilderness wasn’t designated until over a decade later.

In fact, the wilderness was created out of land that was previously known as the “Glacier Primitive Area” but has since been renamed as the Fitzpatrick Wilderness. Nowadays, it remains a popular hiking and mountaineering destination in the heart of the Shoshone National Forest.

Although it’s home to some of the most beautiful mountainscapes in Wyoming and some great trails, the Fitzpatrick Wilderness it’s worth noting that many of the region’s paths are sparsely marked and are difficult to follow. As a result, backpackers heading into the wilderness should be confident in the off-trail navigation skills.

With that in mind, here are some of the best places to check out in the Fitzpatrick Wilderness:

The Glacier Trail is perhaps the best-known trail in the Fitzpatrick Wilderness because it is the most common approach used by climbers looking to summit Gannett Peak. It is approximately 23.6 miles (37.9km) one-way, starting from the trailhead at Trail Lake and ending just at the base of Gannett Peak.

This trail is rugged and poorly marked, so potential hikers should be prepared to lose the path quite a few times on their way to Gannett Peak. It passes by some of the most stunning lakes, as well as the beautiful Dinwoody Creek Canyon, which is truly a sight to behold.

Eventually, after quite a few river crossings, the trail starts to head uphill in earnest as you reach the large alpine meadow at the base of Gannett Peak. If you’re not planning on climbing the mountain (mountaineering skills and equipment are a must for a peak ascent), the meadow makes for a worthy destination.

For folks who really want an adventure, the end of the Glacier Trail is just a short climb away from Blaurock Pass, the highest pass within the entire Wind River Range at 12,700 feet (3,870m).

There is no trail that leads up or down the pass, which requires some good scrambling skills to navigate, but the area on the other side of Blaurock is fairly infrequently traveled and offers further link-ups to the southern part of the Wind River Range, including Angel Pass.

The 4.8 mile (7.7km) Lake Louise Trail starts off at the same trailhead as the Glacier Trail and it follows the same pass for a short distance before departing on its own adventure. It climbs steadily up out of the sagebrush and into the forest until it reaches Torrey Creek.

After quite a bit of climbing, the trail levels out and fairly gently approaches Lake Louise, which makes for an exceptional place to sit back, eat lunch, and enjoy the view of the surrounding area, which includes the rugged Shale Mountain.

These are some of the best places to stay before or after your trip into the Fitzpatrick Wilderness:

While it’s not exactly a major city, the town of Dubois is the closest town to the Fitzpatrick Wilderness as it’s located just north of the wilderness’ boundaries. The town is home to about 970 residents, though many more flock to the region during the summer months due to its stunning scenery.

Although many people stop in Dubois on their way across Togwotee Pass on US Route 26, it’s also a worthwhile place to visit in its own right. The town is home to the Dubois Museum as well as the National Bighorn Sheep Interpretive Center, which both feature excellent exhibits.

Lander, Wyoming is a small city of about 7,500 residents that’s located to the southeast of the Fitzpatrick Wilderness. It is a fun place to visit if you’re looking to enjoy the natural beauty of Wyoming, due to its proximity to a number of major outdoor areas, including the Shoshone National Forest, the crags at Wild Iris, and Sinks Canyon State Park.

While you can only get to Lander by road, there is regional bus service to the city from the airports at Riverton and Casper.

Although it’s located quite a distance to the west, the city of Jackson is one of the largest in the general area, with approximately 10,000 residents. The city is situated at the border of Grand Teton National Park and it is home to a major ski area - Jackson Hole.

Jackson also has the busiest airport in Wyoming - the Jackson Hole Airport - which offers direct flights to a number of major cities in the United States. 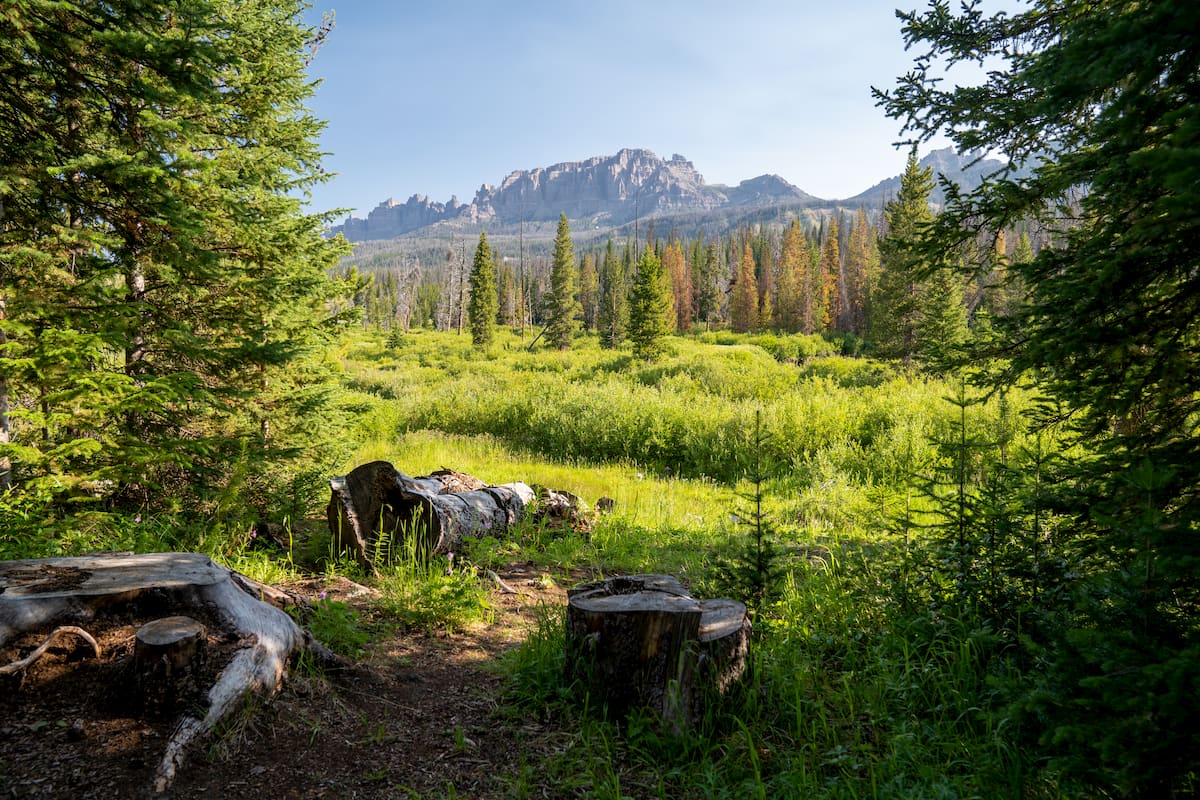 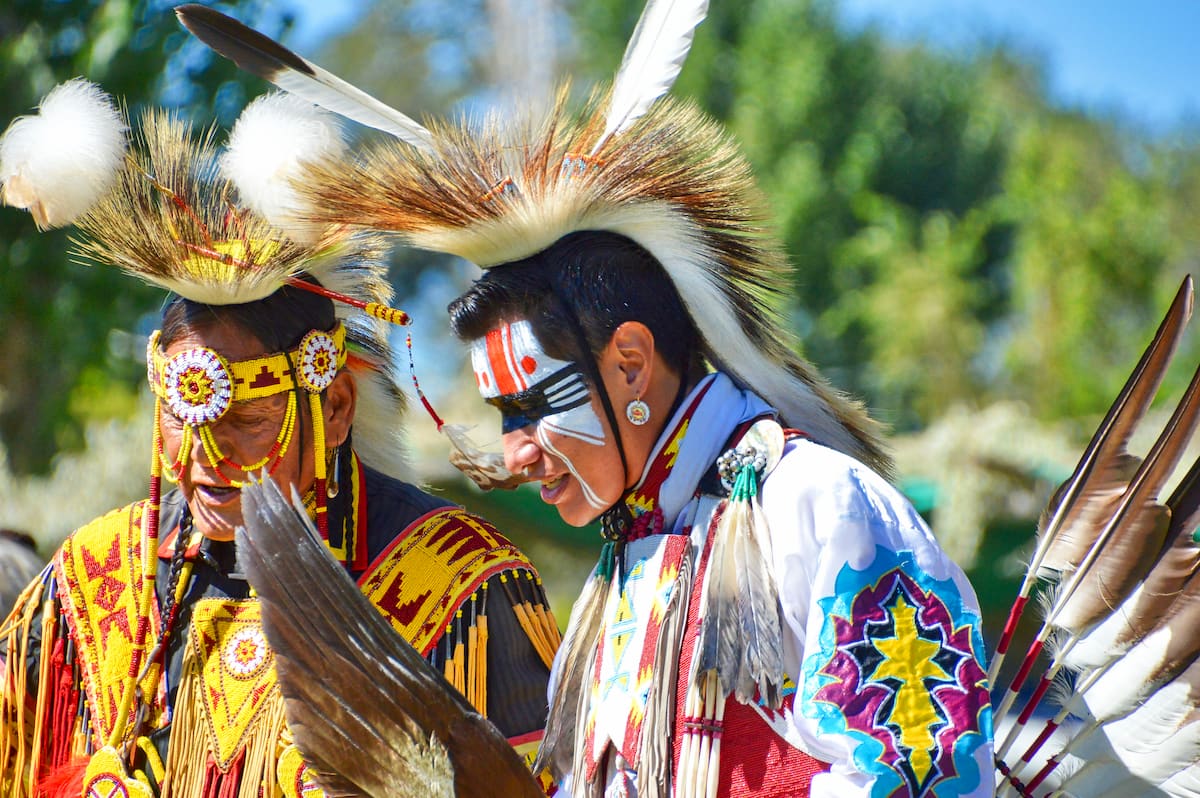 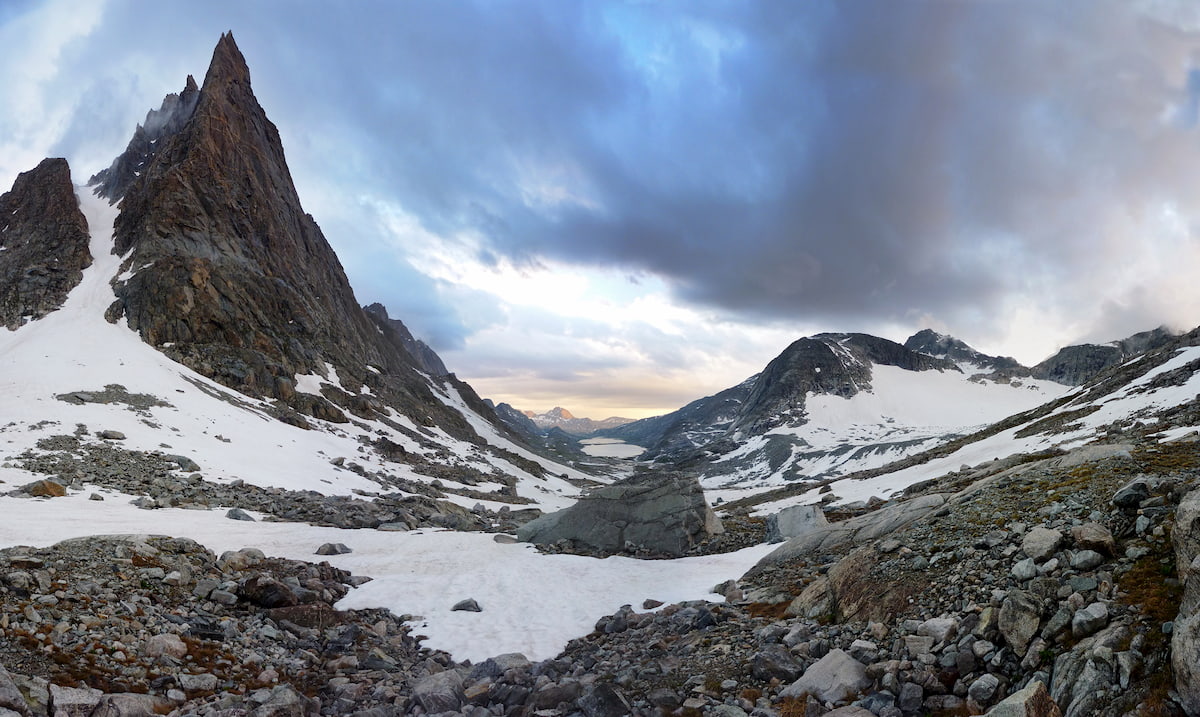 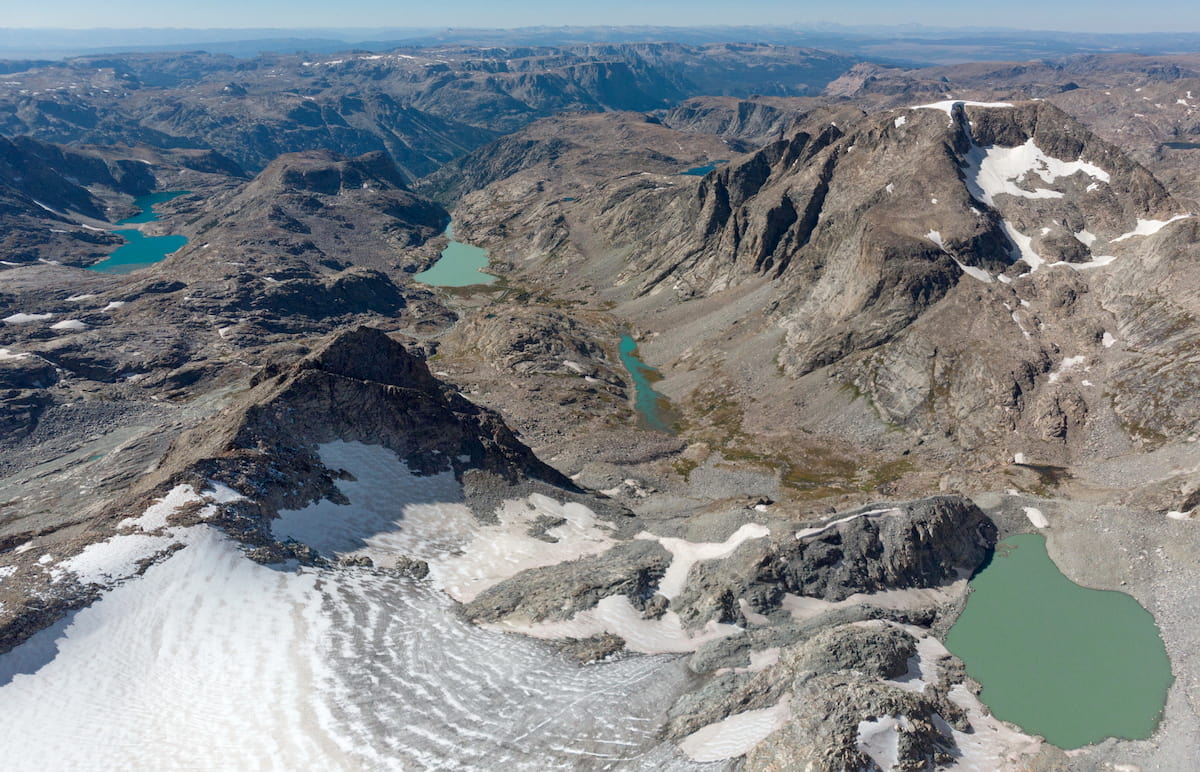 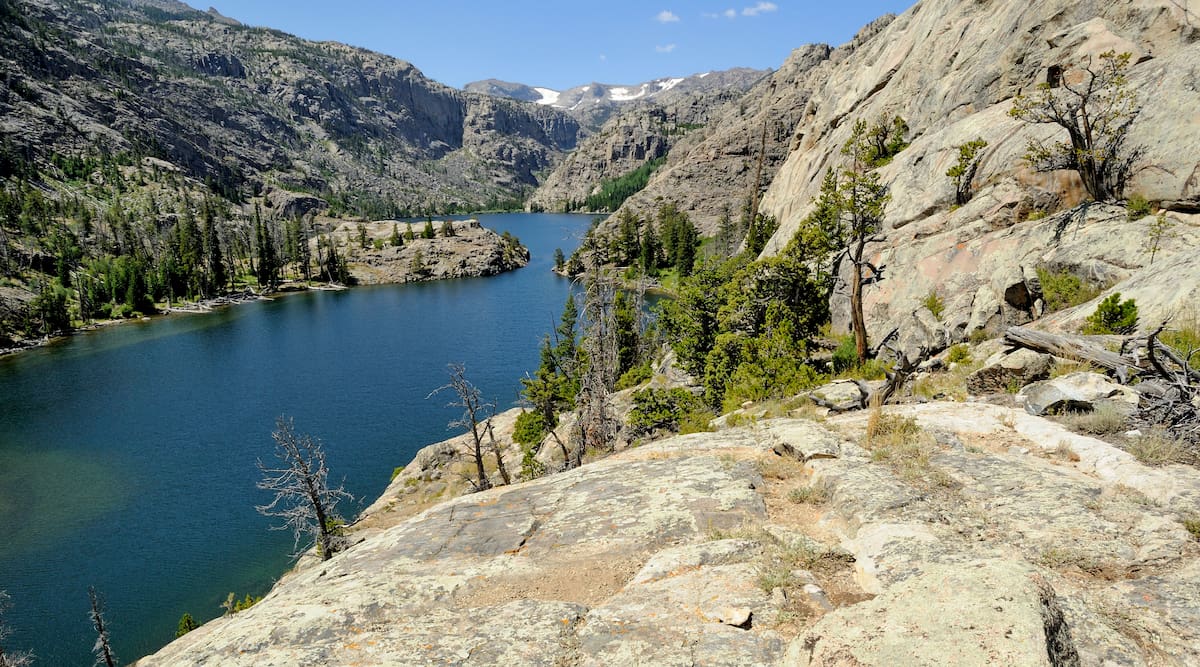 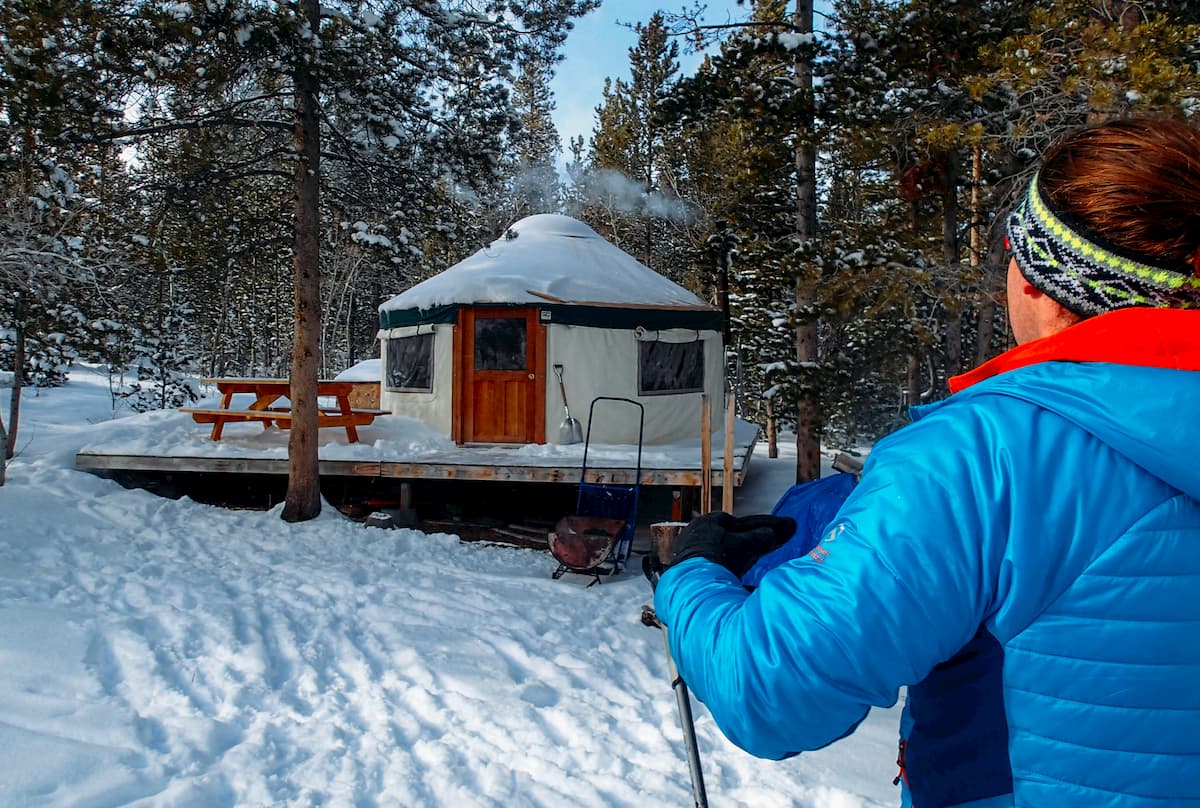