Glistening alpine lakes, staggering cliffs, and truly stunning mountain scenery. That’s what you have to look forward to at the Popo Agie Wilderness Area, a federally protected region located in the west-central part of the US state of Wyoming. The Popo Agie Wilderness Area contains 34 named mountains, the highest and most prominent of which is Wind River Peak (13,186ft/4,019m). 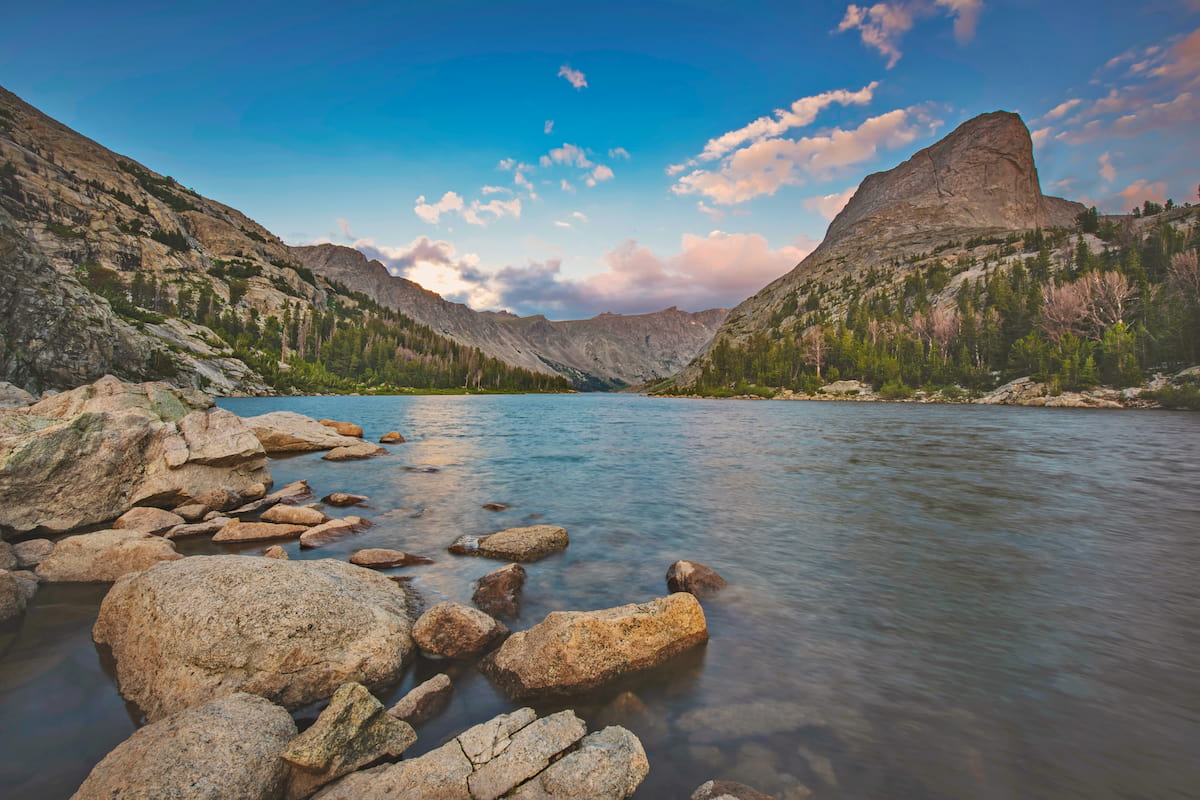 The Popo Agie Wilderness (pronounced puh-poe-zha or /poʊˈpoʊʒə/) is located in the west-central region of the US state of Wyoming in Shoshone National Forest. It includes 101,870 acres (41,225 ha) of land on the eastern side of the Continental Divide within Sublette and Fremont counties.

As a section of the Shoshone National Forest, the Popo Agie Wilderness Area is part of a massive complex of land that includes most of northwestern Wyoming, eastern Idaho, and southern Montana.

Moreover, the Popo Agie Wilderness is situated to the east of the Bridger-Teton National Forest, which encompasses much of the land on the western side of the Continental Divide.

On a more local level, the wilderness is also located to the east of the Bridger Wilderness and south of the Fitzpatrick Wilderness, both of which are also highly popular outdoor recreation destinations.

Finally, the Popo Agie Wilderness is bordered to the northeast by the Wind River Indian Reservation of the Eastern Shoshone Tribe and the Northern Arapaho Tribe. Anyone wishing to access the Popo Agie Wilderness or any other neighboring federally-owned lands by traveling through the Wind River Indian Reservation must get a recreation permit from the Shoshone & Arapaho Tribes Fish & Game and they must get permission to access tribal lands.

The mountains within the Popo Agie Wilderness are part of the Wind River Range. This range is a collection of rugged peaks that extends for some 100 miles (160km) from their northeast border with the Absaroka Range to southeast where they terminate in the lower-lying region of southern Wyoming. Technically speaking, the Wind River Range is part of the Greater Yellowstone Rockies, which covers much of Wyoming and southern Montana.

These mountains are actually the remnants of a large granite batholith which formed below the Earth’s surface about 1 billion years ago. Millions of years later, during the Laramide orogeny, the batholith and the surrounding region was uplifted, starting the mountain-building process.

Over the next tens of millions of years, the region continued to experience uplift and widespread erosion. In particular, the range was heavily eroded during the Pleistocene glaciation, which saw most of the region get covered by massive glaciers.

To this day, the Wind River Range does still have a handful of remaining glaciers, though many of these are small and rapidly decreasing in size. Some of the largest remaining glaciers are actually located to the north in the Fitzpatrick Wilderness and the Bridger Wilderness, which are home to Gannett Peak and its many glaciers.

Although the Popo Agie Wilderness is perhaps best known for its magnificent mountainscapes, the region is also exceptionally biodiverse. Indeed, the Popo Agie Wilderness and the rest of the Wind River Range is part of what’s known as the Greater Yellowstone Ecosystem, which includes about 22 million acres (8.9 million hectares) of land in Wyoming, Montana, and Idaho.

Within the wilderness you can find a great mix of different plant species. Like the rest of the surrounding region, the lowest elevations in the Popo Agie Wilderness (particularly on its eastern flank) are home to sagebrush and grasslands.

At the mid-elevations, which extend up to about 9,000 feet (2,700m), the Popo Agie Wilderness contains sizable forests of Rocky Mountain juniper, quaking aspen, and lodgepole pine. Moving further up in elevation, the forests transition into woodlands of subalpine fir, Engelmann spruce, limber pine, and the beautiful whitebark pine.

When it comes to wildlife, the wilderness does not disappoint. Dozens of mammal species call the region home, including mule deer, elk, moose, bighorn sheep, mountain goats, coyotes, bobcats, wolves, pikas, mountain lions, marmots, and black bears. Grizzly bears are also found in the wilderness, though they’re most common further to the north.

For the anglers among us, the Popo Agie Wilderness is a particularly excellent place to visit. The wilderness contains stocks of a number of different fish species, including brook trout, rainbow trout, and brown trout, which can be found in many of the region’s streams and lakes.

Although the region that is now the Popo Agie Wilderness is considered to be a wilderness that’s free of permanent human settlement, it actually has a long and storied history of human inhabitation.

The region was seldom visited by Europeans and Americans of European descent until the Lewis and Clark Expedition of the early 1800s. Although the expedition actually passed well north of the region, one member of the expedition - John Colter - left the expedition on the return voyage. Afterward, he traveled fairly extensively around the Absaroka Range and perhaps into the Wind River Range.

Over the next few decades, the region became increasingly important to the United States as a potential source of mineral wealth and timber. This, of course, led to conflict in the region as the US government sought to remove Indigenous peoples from their ancestral lands.

By the 1880s, then-future President Theodore Roosevelt made one of his first visits to the area, though his travels were mostly in the north, near the Yellowstone region. After his visit, he lobbied hard in Congress to designate the region as the Yellowstone Timberland Reserve in 1891, which later became the Shoshone National Forest in 1905.

These days, the Popo Agie Wilderness remains one of the most popular and most heavily traveled wilderness areas in the Shoshone National Forest. It is a veritable treasure trove of outdoor recreation opportunities, including hiking, fishing, climbing, and horsepacking.

The Popo Agie Wilderness is a backpacker’s paradise, especially if you’re willing to hike off-trail. While there are quite a few trails in the wilderness, however, it’s important to note that many of the paths in the region are poorly marked and infrequently maintained.

Indeed, anyone interested in heading into the wilderness should be prepared for some off-trail travel, even if you intend to follow a specific trail to your destination. Trails are known to disappear and reappear in the wilderness, so having a solid understanding of backcountry travel is a must.

Moreover, the terrain in the wilderness is rough, particularly at higher elevations where you may need to traverse significant scree slopes and at low to mid elevations where major river crossings are likely in the early summer months. Therefore, confidence in managing risk in these environments is essential for a successful adventure in the Popo Agie Wilderness.

Here are some of the more popular trails and hiking destinations to consider in the Popo Agie Wilderness.

Big Sandy To Cirque of the Towers

Perhaps the most popular trail in the Popo Agie Wilderness, the Big Sandy Trail to the Cirque of the Towers technically starts in the Bridger-Teton National Forest at the Big Sandy Trailhead and then continues onward toward one of the most magnificent areas in the state of Wyoming.

This 16.6 mile (26.7km) out and back trial starts at the Big Sand Trailhead and takes you to Big Sandy Lake before you head up to Jackass Pass. After climbing up to Jackass Pass, you can sit back and take in the wonderful views of the Cirque of the Towers in front of you as you stand atop the Continental Divide.

Although Jackass Pass is a worthy destination in its own right, as it offers great views of Temple Peak, continuing down the pass to Lonesome Lake is a must-do.

Once you’re at the Lake, you can gaze up at the famous Cirque of the Towers, including Pingora Peak and its stunning neighbors. Camping in the region is world-class, but keep in mind that camping is not allowed within 0.25 miles (400m) of Lonesome Lake.

From the lake, you have plenty of other hiking opportunities if you’re looking to extend your adventures even further. For the more ambitious among us, it’s possible to head to the northern part of the Cirque and climb up to Texas Pass, which offers you access to even more stunning and remote terrain around the base of Cathedral Peak and Mount Chauvenet.

The highest peak in the Popo Agie Wilderness, Wind River Peak is a must-visit for experienced backcountry travelers. There are many ways to reach Wind River Peak, which lies on the Continental Divide and on the boundary between the Bridger-Teton National Forest and the Shoshone National Forest.

However, due to the steepness of the terrain on the western side of the divide, approaching the peak from the south or northeast is usually the best option.

From the northeast, there is technically a trail (forest service trail 706) that leads toward Deep Creek Lakes. The Deep Creek Lakes are located at the base of a long, gently sloping northeast ridge that leads to the summit of Wind River Peak. This trail can be accessed either from the North Fork Trail from the north or from a trail leading from Sweetwater Gap in the south.

Alternatively, it’s possible to reach the summit of Wind River Peak by approaching from the south. The approach from Tayo Lake at the base of Temple Peak is substantially steeper than the approach from the northeast and it does require a section of somewhat exposed 4th class scrambling.

Here are some of the best places to stay before or after your trip into the Popo Agie Wilderness.

The city of Lander is situated just to the east of the Popo Agie Wilderness. It is home to about 7,500 residents and it is a popular destination for outdoor recreation, thanks to its proximity to Shoshone National Forest, Sinks Canyon State Park, and Wild Iris, the latter of which is a popular climbing spot.

Lander has a great collection of beras, restaurants, and outdoor gear stores, which make it a nice place to start your trip. Although the town is only accessible via road, there is a regional bus service that offers transport from the nearby airports in Riverton and Casper.

Pinedale is a city of some 2,000 residents located to the west of the Wind River Range in Sublette County.

It has a small ski area and is home to some great outdoor recreation opportunities, due to its proximity to the Bridger-Teton National Forest and the Shoshone National Forest. The city is a good place to start if you’re looking to access the Popo Agie Wilderness from the western side of the Continental Divide.

Rock Springs is a city of about 23,000 residents that’s located in the southern part of Wyoming, near the state’s border with Utah. It is a few hours drive away from the Popo Agie Wilderness, but it is located along I-80 and it has a small airport with service to major destinations in the Rocky Mountain region. 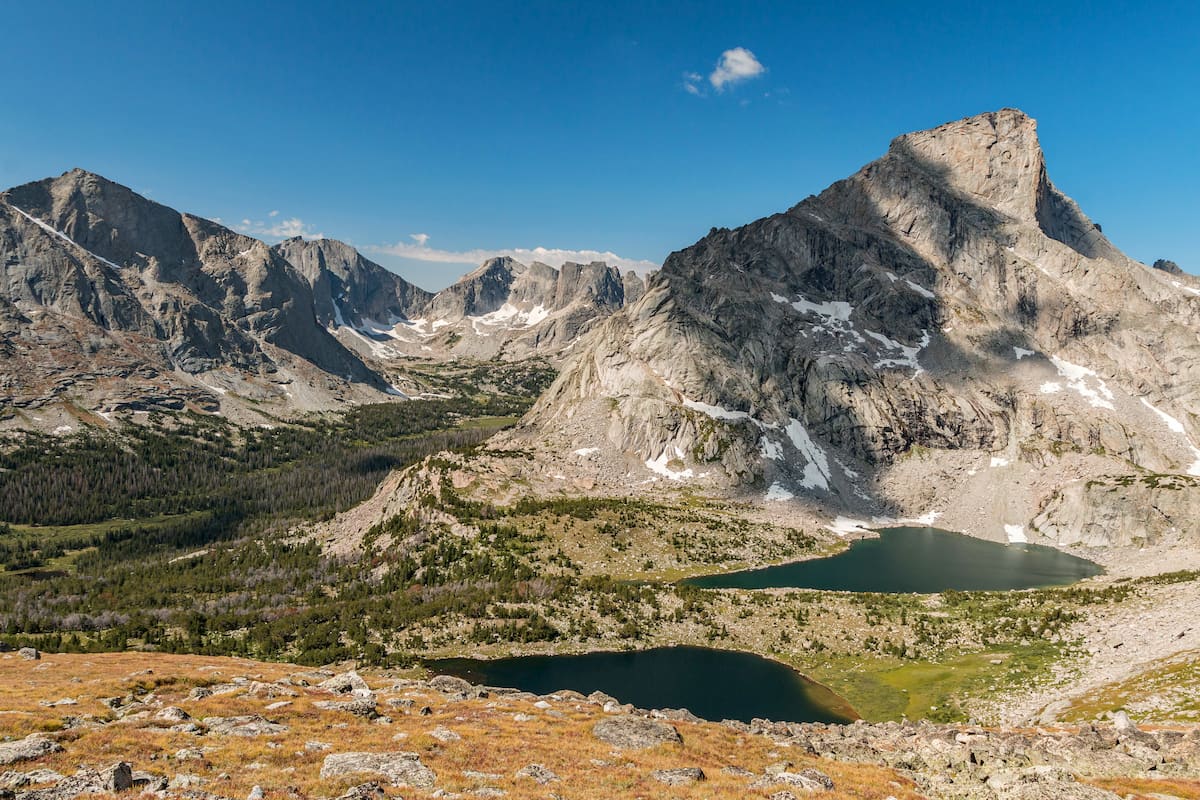 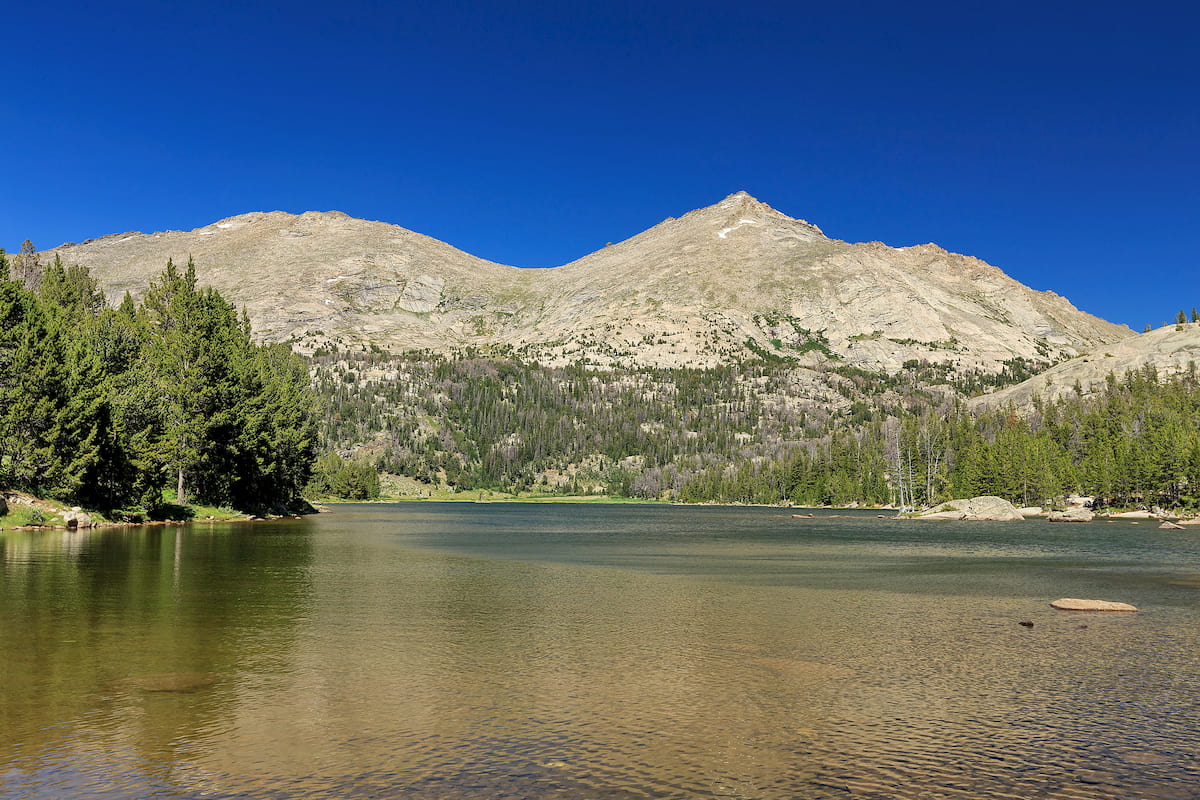 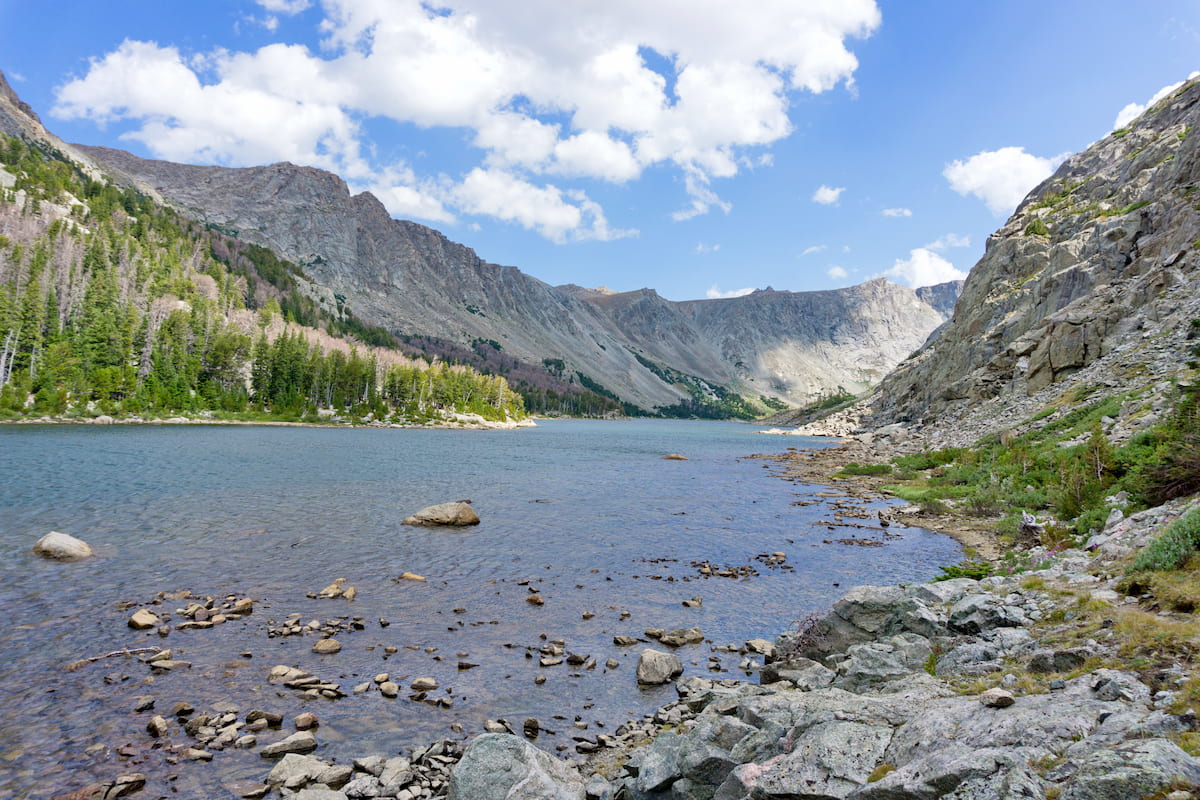 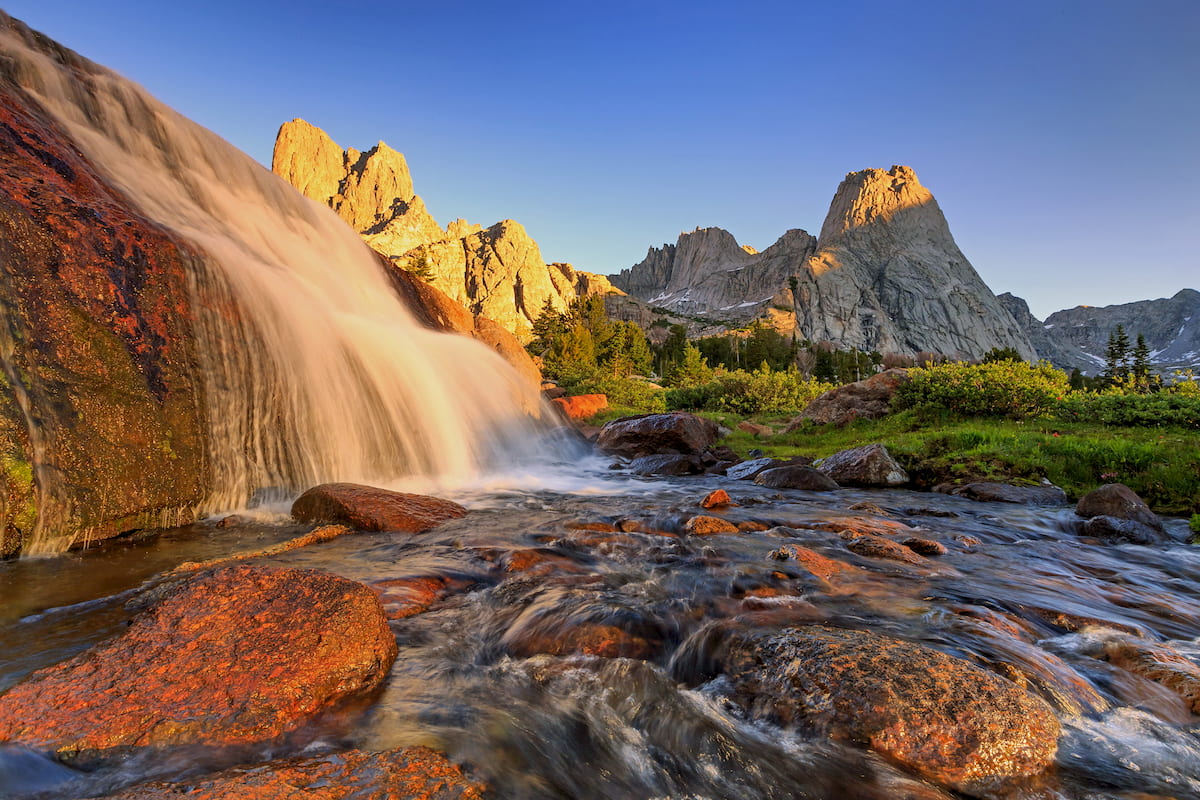