The staggering granite peaks of the Wind River Range have long captured the collective imaginations of the people who live in and travel through the area. Situated in western Wyoming, the Wind River Range runs northwest to southeast for approximately 100 miles and is part of the greater Rocky Mountain range of the Western United States. 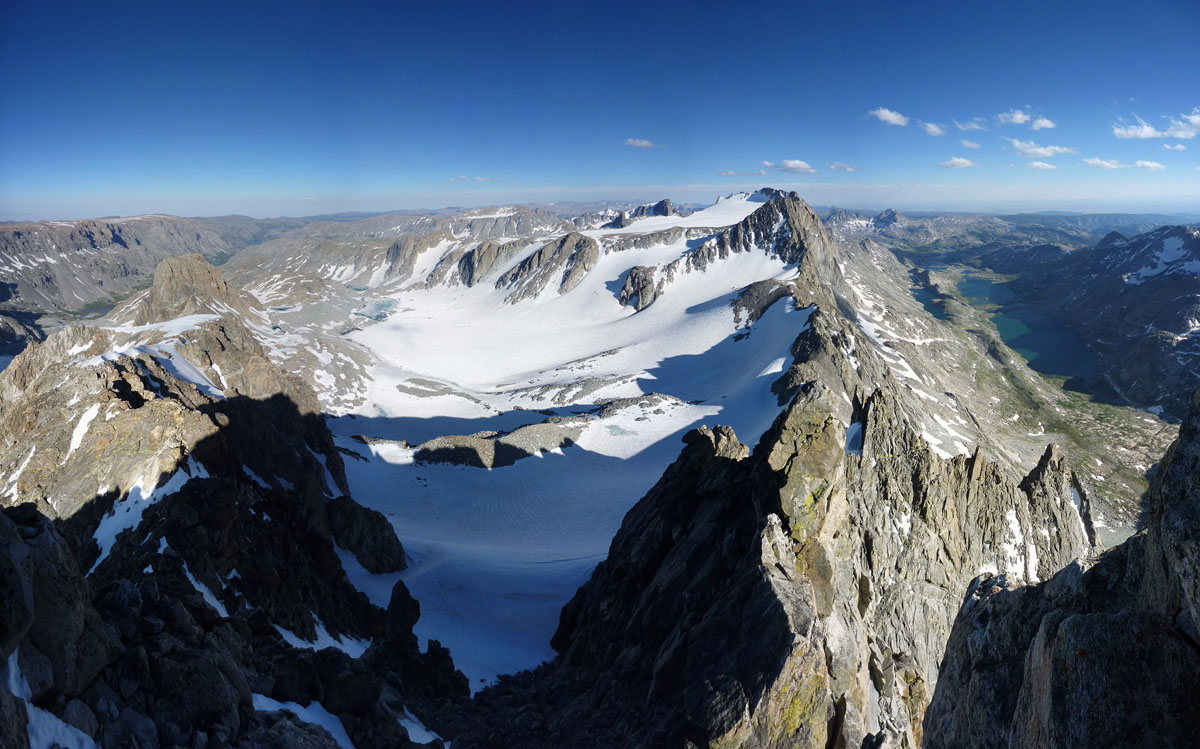 In fact, there are more than 40 named peaks in the Wind River Range that are over 13,000 feet (3,962m), which only adds to the beauty of the area’s landscape and the difficulty of traversing the terrain.

While the current-day Wind River Range is managed mostly by federal land agencies, the Indigenous peoples of the Great Basin, including the Shoshones and Absarokas (Crow) peoples traditionally inhabited the land for the last 9000 years. These original inhabitants of the Wind River Range were known to set up villages as high as 10,000 feet in elevation during the pine nut harvesting season.

One member of the Lewis and Clark expedition party, John Colter, is believed to have been the first person of European descent to have seen the Wind River Range when he visited the area in 1807. Recreational climbing and hiking in the area are believed to have started when John C. Fremont climbed the mountain that is now known as Fremont Peak (13,704ft/4177m).

The modern Wind River Range is a very popular outdoor recreation area in the Western United States because of its high concentration of tall, beautiful mountains with high-quality rock. The Wind River Range is part of a granitic batholith that formed some one billion years ago under the surface of the Earth. As the rocks that were once covering this batholith eroded away, the granitic rocks we see today were exposed to the surface of the earth.

During the start of the ice ages, some 500,000 years ago, glaciers and ice sheets began carving the granite into its current craggy shape. These glaciers left behind numerous cirques, which eventually filled up to form beautiful alpine lakes, the most well known of which is the stunning Cirque of the Towers in the range’s southern reaches.

Although the last major glaciation ended 10,000 years ago, the Wind River Range is home to some of Wyoming’s last glaciers. The Shoshone National Forest estimates that there are still 16 named and 140 unnamed glaciers on the eastern side of the range, while the Bridger-Teton National Forest estimates that there are 27 glaciers left in the western portion of the range. The largest single glacier in the US Rocky Mountains is called Gannet Glacier, which flows down the northern flank of Gannet Peak.

The range itself is actually part of the Greater Yellowstone Ecosystem, which is one of the last remaining ecosystems in the Earth’s northern temperate zones that is nearly intact. At its lower elevations, the Wind River Range is dominated by forests of lodgepole pine, whitebark pine, subalpine fir, and Engelmann spruce. As one moves up in elevation, the trees of the Wind River Range give way to an assortment of shrubs, grasses, and wildflowers that are well adapted to the harshness of the alpine landscape.

Animals are plentiful in the Wind River Range, finding sustenance and food in the mountains thanks and riparian zones of some of the region’s large rivers, such as the Popo Agie. The main large mammals found in the range include black bear, elk, moose, mule deer, bighorn sheep, mountain lion, and the elusive wolverine. The range is also known to have a population of grizzly bears that lives in the northernmost mountains of the area.

Over three hundred species of birds live in the region, including bald eagles, falcons, and hawks. Outdoor recreationalists often head to the range’s many streams and alpine lakes to fish for rainbow, brook, brown, lake, and golden trout.

Perhaps the most formidable animal in the entirety of the Wind River Range is not a bear (though encounters are fairly common) but the mosquito. The Wind River Range mosquito is the stuff of legend, as they hatch by the billions as the winter snow starts to melt in the early summer months. Those brave enough to face the mosquitos in exchange for spectacular mountain views are greeted with swarms of the little biting bugs as they try to eat dinner in camp at the end of the day. Needless to say, a mosquito head net is highly recommended.

Ultimately, the Wind River Range is an outdoor recreationist's paradise, especially if you’re keen to head off trail to explore alpine cirques and stunning granite peaks. Fly fishing, hiking, horsepacking and amazing views are just some of the wonders that await you in the Wind River Range.

The Wind River Range is split roughly into three areas - the Shoshone National Forest on the eastern part of the Continental Divide, the Bridger-Teton National Forest to the west, and the Wind River Indian Reservation to the south. Within the two National Forests, there are three wilderness areas that encompass the vast majority of the range. These wilderness areas include the Bridger Wilderness, the Fitzpatrick Wilderness, and the Popo Agie Wilderness. In these areas, no mechanized or motorized travel of any kind is allowed, so they’re great places to head to if you’re looking for some quiet solitude in the mountains.

While the Wind River Range is home to an expansive trail network, the best hiking in the area is done in off-trail in the alpine. Here, you can scramble over boulder fields, access seldom visited alpine lakes, and enjoy the wilderness in its true form. That being said, there are some popular trailheads and hiking areas in the range that any visitor to the Winds ought to know about:

Titcomb Basin rivals the famous Cirque of the Towers (also in the Winds) when it comes to stunning mountain views. Additionally, Titcomb Basin provides one of the two main approaches to climbing Wyoming’s highest mountain - Gannet Peak, which is commonly thought to be one of the most difficult state highpoints to climb, after Denali (Alaska), Mount Rainier (Washington), and Granite Peak (Montana).

Titcomb Basin is situated just west of the Continental Divide, deep in the heart of the range. The Basin itself is home to four sizeable alpine lakes, plentiful boulder fields, and sharp, jagged peaks. That being said, getting to Titcomb Basin is no walk in the park. A hike into Titcomb Basin will be at least 11.5 to 13 miles (18.5-20.9km), which takes most groups at least two days.

One of the simplest ways to get to the Basin is via the Elkhart Park Trailhead near Pinedale, Wyoming. From the trailhead, hikers will walk about 10.5 miles toward Island Lake at about 10,400 ft (3,169m) on an undulating trail. From here, hikers will walk about a mile (.6km) to a signed trail junction, where they will bear left to head toward the fantastic views of Titcomb Basin.

Camping in Titcomb Basin is an amazing experience, but it can be difficult to find a good campsite. This is because regulations require that all campsites be at least 200 feet (60m) from any lakes or streams, so you may want to consider finding a sport near Island Lake to set up basecamp for your adventures.

Cirque of the Towers

There are many different routes to the Cirque of the Towers, the shortest of which is via the Big Sandy Lake and Jackass Pass trails. From the Big Sandy Trailhead, you’ll wind through trees and meadows along the Big Sandy River. , you’ll turn onto the trail toward Sedgewick Meadow and head toward Big Sandy Lake.

After a few miles of walking, you’ll eventually come to a large meadow with expansive views of Mitchell Peak, Dogtooth Mountain, Big Sandy Mountain, and Schiestler Peak before you cross the meadow and reenter the trees. More walking takes you to the shores of Big Sandy Lake, where you can find some popular campsites if you’re taking your time on this hike - just remember to bring bear-resistant food canisters!

A few miles later, you’ll eventually crest a high point above Arrowhead Lake, where you’ll get your first views of the peaks of the Cirque of the Towers, including Pingora, Wolfs Head, and Pylon Peak. Once reaching this high point, you’ll start descending down slabs toward Arrowhead Lake after which point you’ll cross a boulder field to reach the base of Jackass Pass.

Steep climbing takes you to the top of Jackass Pass where you’ll be treated to amazing views of the Cirque itself, as well as of Lonesome Lake. As you continue hiking, you’ll start descending steep switchbacks, which provide excellent views for your efforts. Eventually, you’ll see a trail junction that takes you to some campsites above the lake. Congrats, you’ve made it! Just remember - there’s no camping allowed within a half-mile (0.8km) of Lonesome Lake!

The Wind River Range is located in a remote part of the sparsely populated state of Wyoming, so there aren’t really any “big cities” close to the trailheads that access the mountains. That being said, there are some smaller towns within spitting distance of the range, as well as two major cities a 4-5 hour drive from the general area. Let’s check them out here:

Lander, WY is located just south of the Wind River Indian Reservation and is a bustling city of some 7,500 people. Lander has everything you need, from food to climbing and camping gear, so it’s a great starting point for your journey. Plus, you can camp for free in the city park for up to 3 days at a time if you’re looking for pre- and post-trip accommodation.

The city of Lander is located along the Middle Fork of the mighty Popo Agie River and is just a short 15-minute drive out to Sinks Canyon State Park. At Sinks, you can rock climb until the cows come home, camp out in one of the many campgrounds, or start your trip into the Winds from one of the trailheads.

Getting to Lander is somewhat tricky, however, if you’re not arriving by car. You can fly into Riverton and take an affordable shuttle into Lander through the Wind River Transportation Authority, though flights into the airport can be quite pricey. Flights into Casper are much more affordable, but the shuttle cost can be quite high. Other options include flying into either Denver or Salt Lake City and renting a car.

Jackson, WY is nestled at the foot of the stunning Teton Mountains and is home to the world famous Jackson Hole Mountain Resort. Jackson is located on the western side of the range, so it’s an ideal starting point for adventures to the west of the Divide. Flights into Jackson are fairly affordable for a regional airport, too. 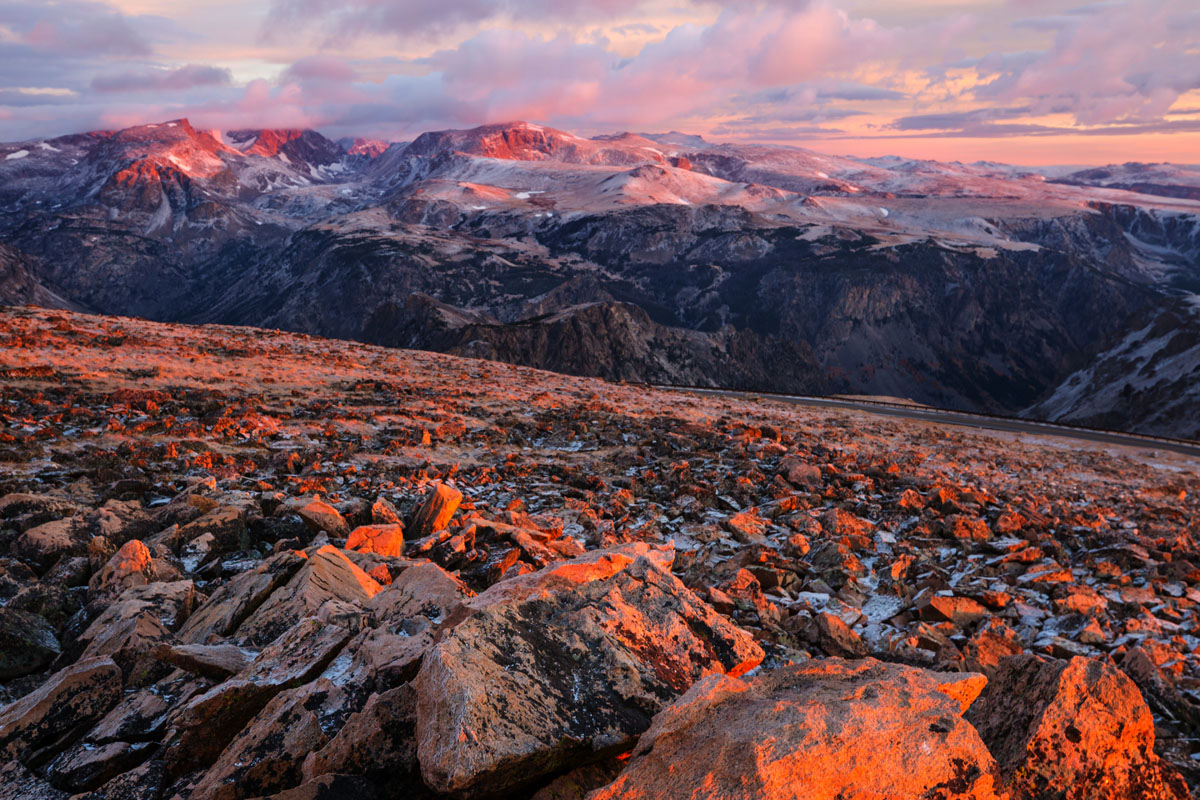 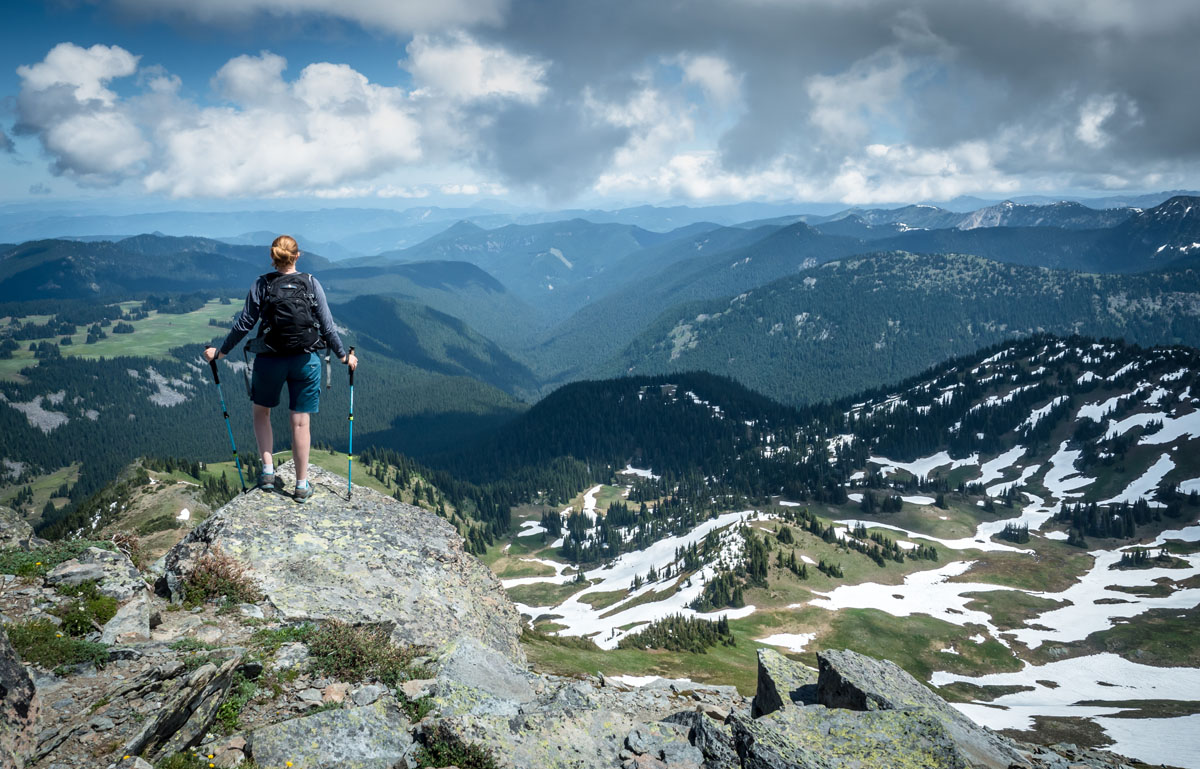 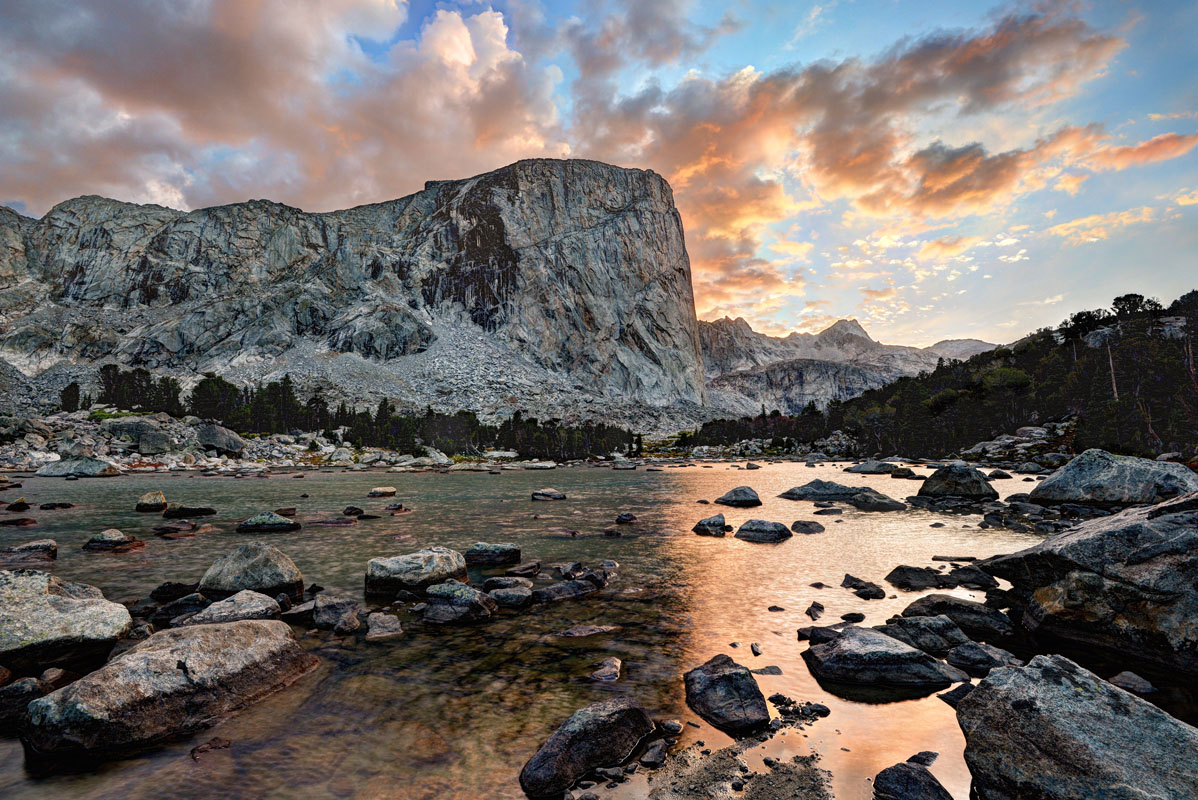 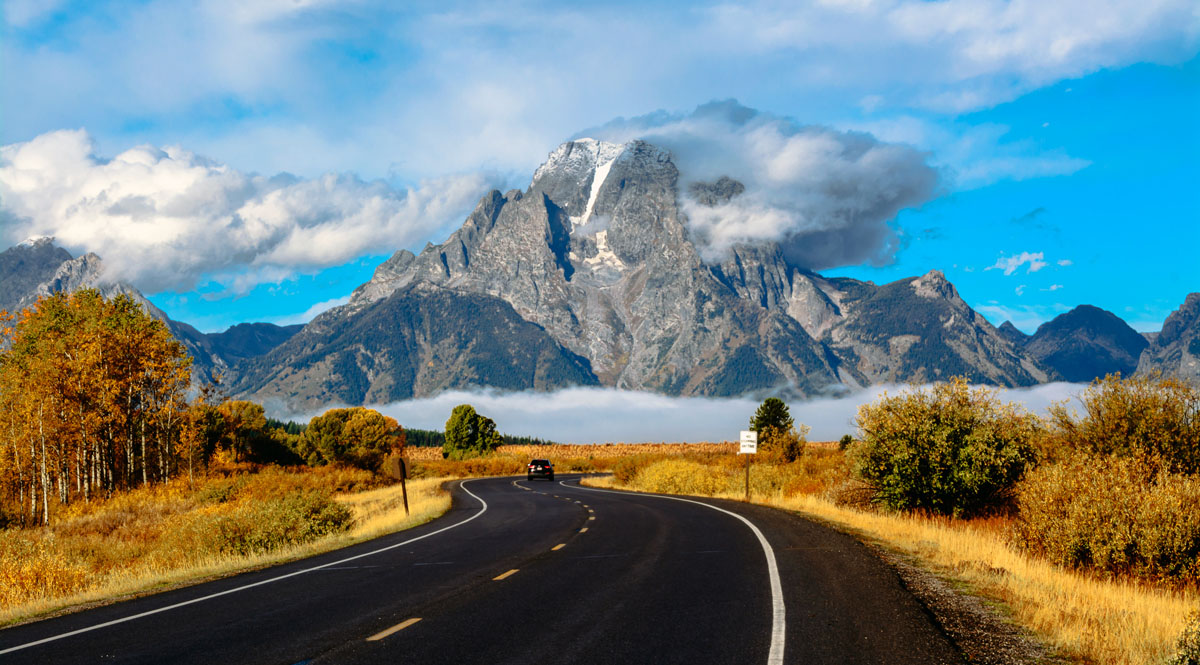 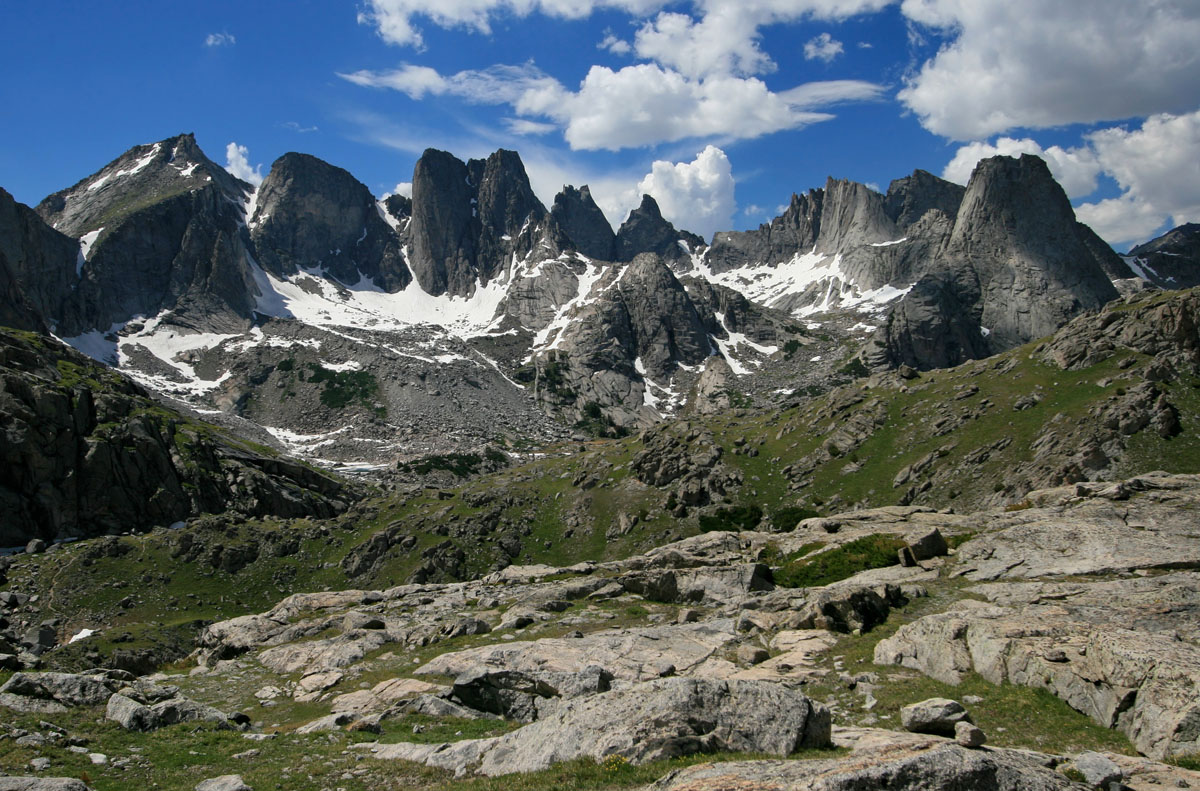 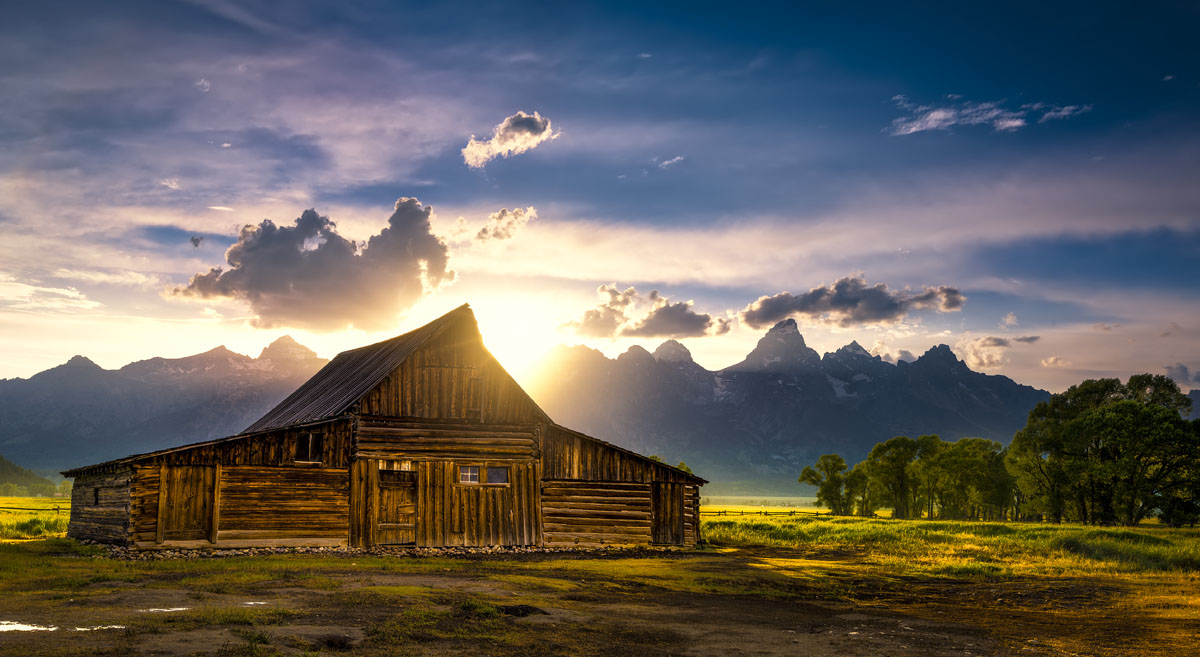