Straddling the borders of two US states - Montana and Wyoming - the Absaroka Range (or Absarokas, as they’re known locally) is a collection of 399 named mountains, the highest of which is Francs Peak (13,158ft/4,011m) and the most prominent of which is Granite Peak (12,776ft/3,904m). The Absarokas run in a northwest-southeast direction from Livingston, Montana to Dubois,Wyoming and cover an area about 150 miles (240km) long and 75 miles (120km) wide. They are a sub-range of the Greater Yellowstone Rockies in Wyoming and Montana and are crossed by the Continental Divide in the southern part of the range. 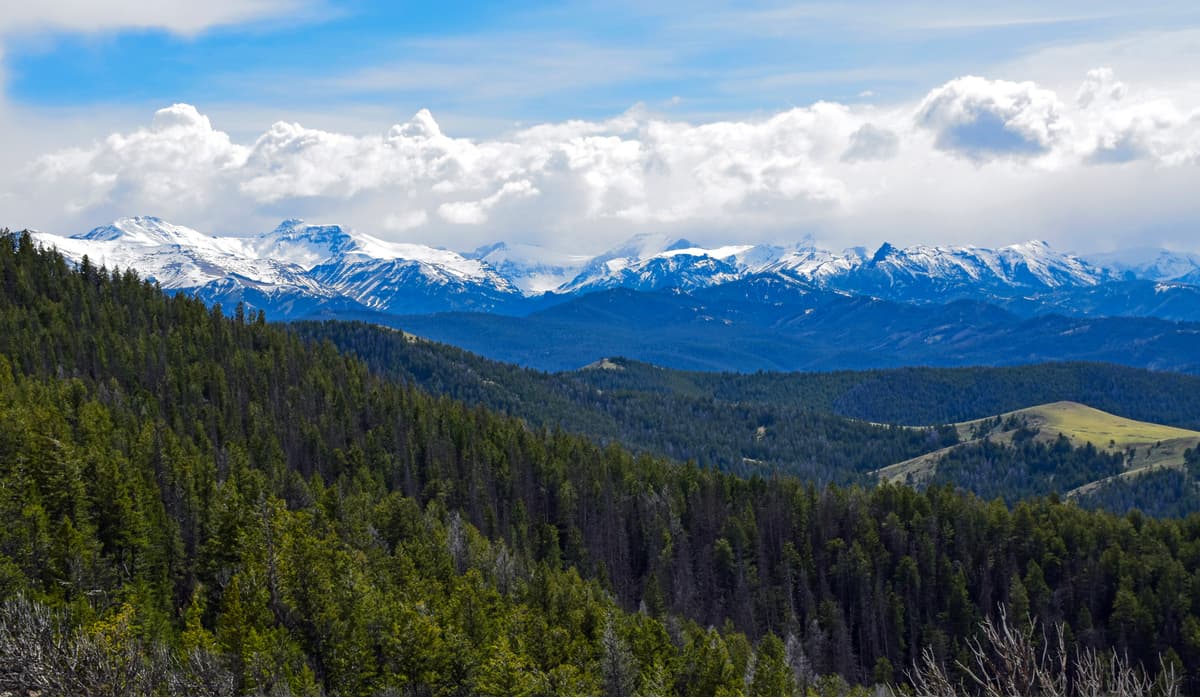 Located just east of Yellowstone National Park, the Absarokas form the park’s eastern boundary near Paradise Valley and are situated to the west of Bighorn Basin and the Bighorn Mountains. The Absarokas are also located north of the Wind River Range, south of the Beartooth Mountains, and just east of the Teton Range. In the western part of the range, the Absarokas transition into a high plateau, known as Union Pass, where they form an intersection with the Gros Ventre Range and the Wind River Range.

Most of the bedrock found in the Absarokas dates back to the Eocene Epoch and radiometric dating shows that most of the range is about 53 to 43 million years old. Indeed, true to its volcanic origins, you can still see the eroded remains of some old stratovolcanoes within the Absaroka Range, which is home to some of the oldest field studies in the geologic sub-discipline of volcanology, dating back to the nineteenth century.

The mountains themselves are the result of this extensive volcanism, though many of the features we still see today are the work of the countless glaciers that carved out the region during the last major glaciation, some 10-20,000 years ago. Interestingly enough, the Absarokas are home to 2 ofWyoming’s 38 remaining named glaciers - Fishhawk Glacier and DuNoir Glacier - which visitors to the range can visit during their travels.

The Absarokas have been home to humans for thousands of years. In fact, the range’s English name comes from that of the Absaroka (Crow) people, who have lived in the region for countless generations. The name Absaroka, or Apsáalooke, was a name given to the Crow people by the nearby Hidatsa, a Siouan-speaking group. Absaroka translates to “children of the large-beaked bird,” which was then translated by French-speaking trappers and hunters as “gens du corbeaux” or “people of the crows,” which is how the Crow Nation got its English name.

John Colter, a member of the Lewis and Clark Expedition of 1803-1806 may have been one of the first white people to visit the Absaroka Range during his reconnaissance trip to the greater Yellowstone Region in 1807 and Colter Peak was named in his honor. These days, the Absarokas remain some of the wildest and least developed terrain inWyoming and Montana.

Parts of the range are located within a number of different federally-protected forests, parks, and wildernesses, including:

However, the southern-most section of the Absaroka Range is within the territory of the Wind River Reservation of the Eastern Shoshone Tribe. While there is public paid and free access to the portions of the Absarokas on federally-controlled land, anyone wishing to visit the section of the range within the Wind River Reservation needs to seek permission from the Shoshone and Arapahoe Tribes Fish and Game and generally must be accompanied by a local guide.

As one of the largest single ranges in Montana andWyoming, the Absarokas are home to a number of well-known peaks, including Pilot Peak, Mount Cowen, Avalanche Peak, and Emigrant Peak, many of which are found close to highways or within Yellowstone National Park. Within the Absarokas, there are countless trails, particularly near Yellowstone, however, there are plenty of remote, trailless sections of the range that are perfect for a backcountry adventure.

The Absaroka Range is a vast swath of mountainous terrain that contains hundreds of trails and a patchwork system of wilderness areas that are perfect for longer backpacking trips. Here are some of the most popular hikes in the Absarokas:

This hike starts at a trailhead just 15 miles south of Livingston, Montana and takes you on a 4.4-mile (7.1km) one-way hike with 3,400 feet (1,036m) of vertical elevation gain to see the stunning Black Mountain. Along the way, you can enjoy a quick dip in Pine Creek Lake or the views at the busy Pine Creek Falls, but few hikers actually make it to the base of the peak, choosing to stop at the falls instead.

Starting out at the East Rosebud Trailhead, this hike up the East Rosebud Trail meanders along the bottom of a valley and crosses through a number of small meadows along East Rosebud creek. Along the way, you’ll get to see some small waterfalls, as well as some spectacular views of nearby peaks as you hike the 6.7 miles (10.7km) round-trip on this well-maintained trail.

This 26.6 mile (42.8km) point-to-point hiking trail takes backpackers up into the heart of the Beartooth Plateau, one of the most unique sections of the Absarokas. As this is a point to point, you can choose to start either at Cooke City, Montana or the East Rosebud Trailhead.

Along the trail, you’ll get fantastic vistas of steep cliffs, snow-capped mountains, and alpine meadows, here you can spend some quality time fly fishing in the range’s many rivers and lakes. Plus, there are many superb camping spots along the way.

This 19.4 mile (31.2km) roundtrip trail is a great out-and-back path to visit the most prominent peak in the Absarokas, Granite Peak. The trail itself is difficult and rugged but offers great opportunities to see the high point of Montana in person. While the Granite Peak Trail is the main access route to the summit for climbers, it also makes a nice backpack for people looking to experience some of the alpine regions of the Absarokas.

The Absarokas are located in a fairly remote part of bothWyoming and Montana, so you won’t find too many sprawling metropolises nearby. However, there are some sizeable towns and small cities that make great starting points to your adventures.

Located near the southern edge of the Wind River Reservation, the town of Lander is a bit of a drive from the southern part of the Absarokas, but it’s a tourist hub in the center of the state. Although many people depart lander for trips into the nearby Wind River Range, this city of about 7,500 people is incredibly popular among outdoor enthusiasts (particularly climbers that head to both Wild Iris and Sinks Canyon) and has pretty much anything you need to head out for a backcountry adventure.

Lander is also the world headquarters of NOLS, a leading outdoor education organization, so there are plenty of like-minded outdoor enthusiasts around town that would be happy to give you ideas for your upcoming trip to the Absarokas.

Located at the northern terminus of the Absaroka Range, Livingston, Montana is home to about 7,500 people and is considered a gateway to Yellowstone National Park. Due to its proximity to the mountains, Livingston is an ideal place to start your adventure into the northern Absarokas, though transport to the city from Bozeman can sometimes be tricky to arrange if you don’t have a car. 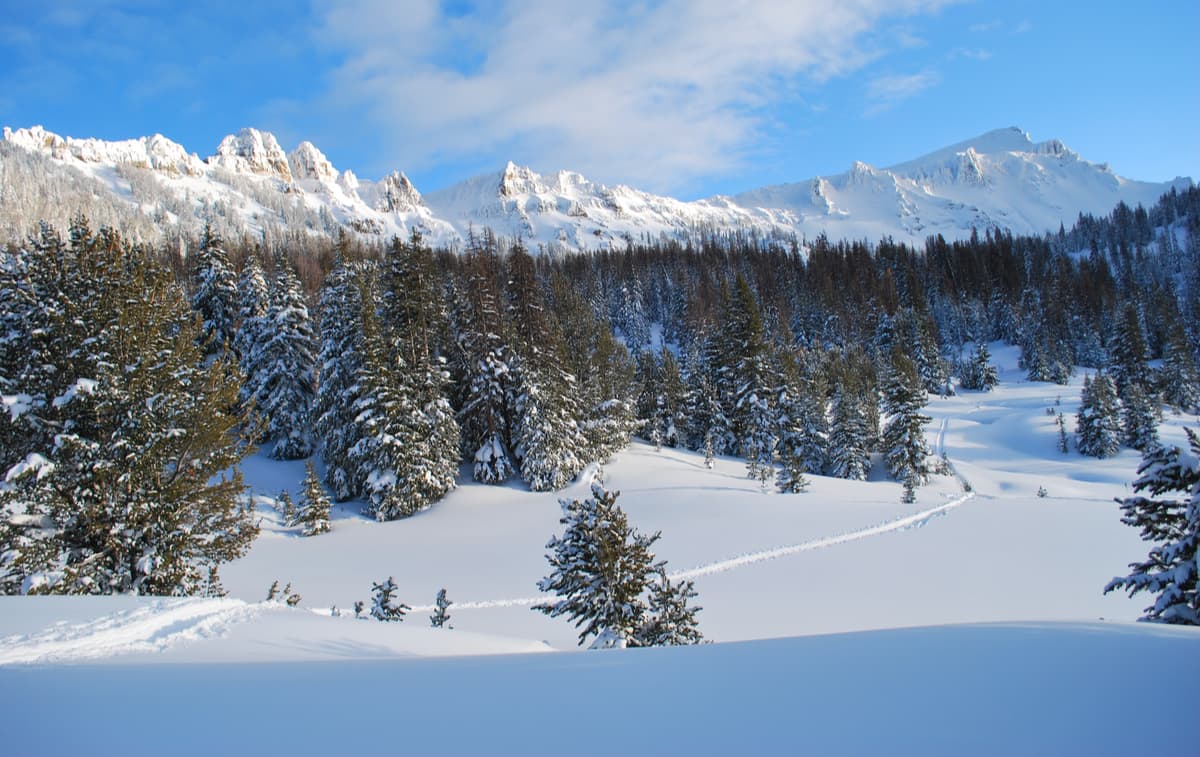 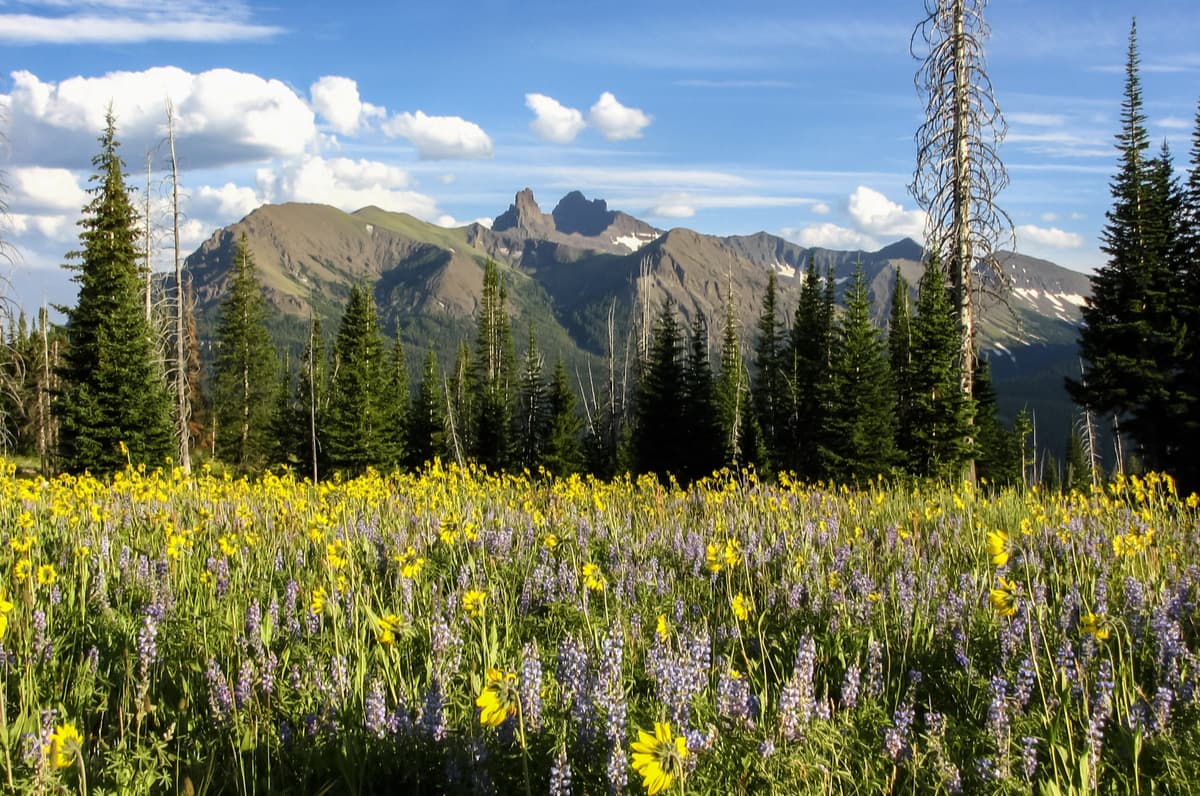 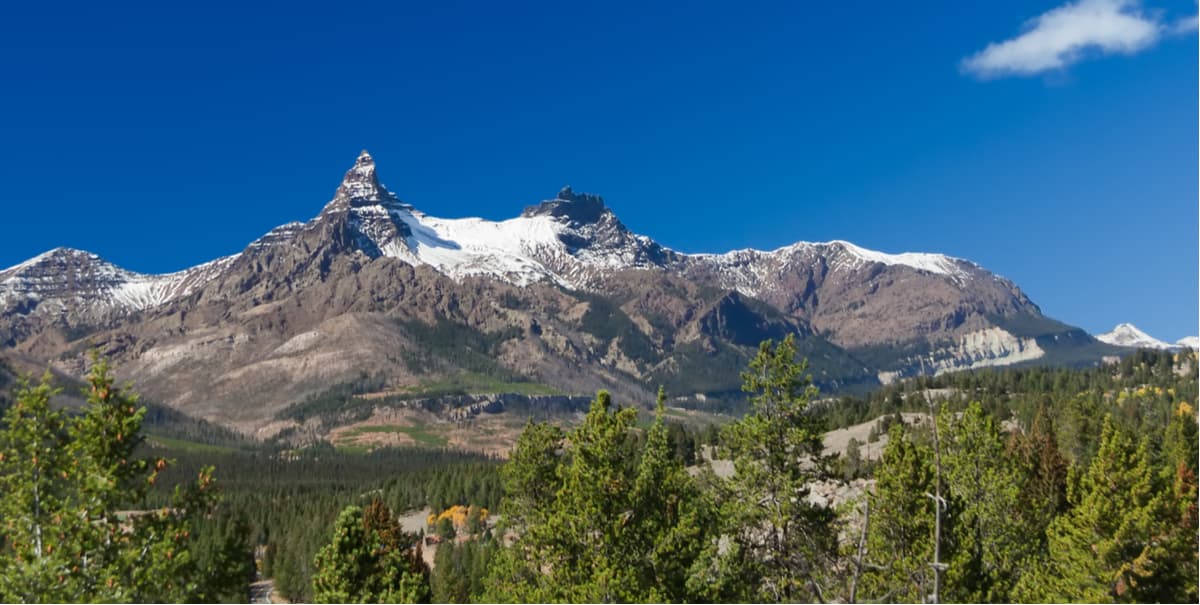 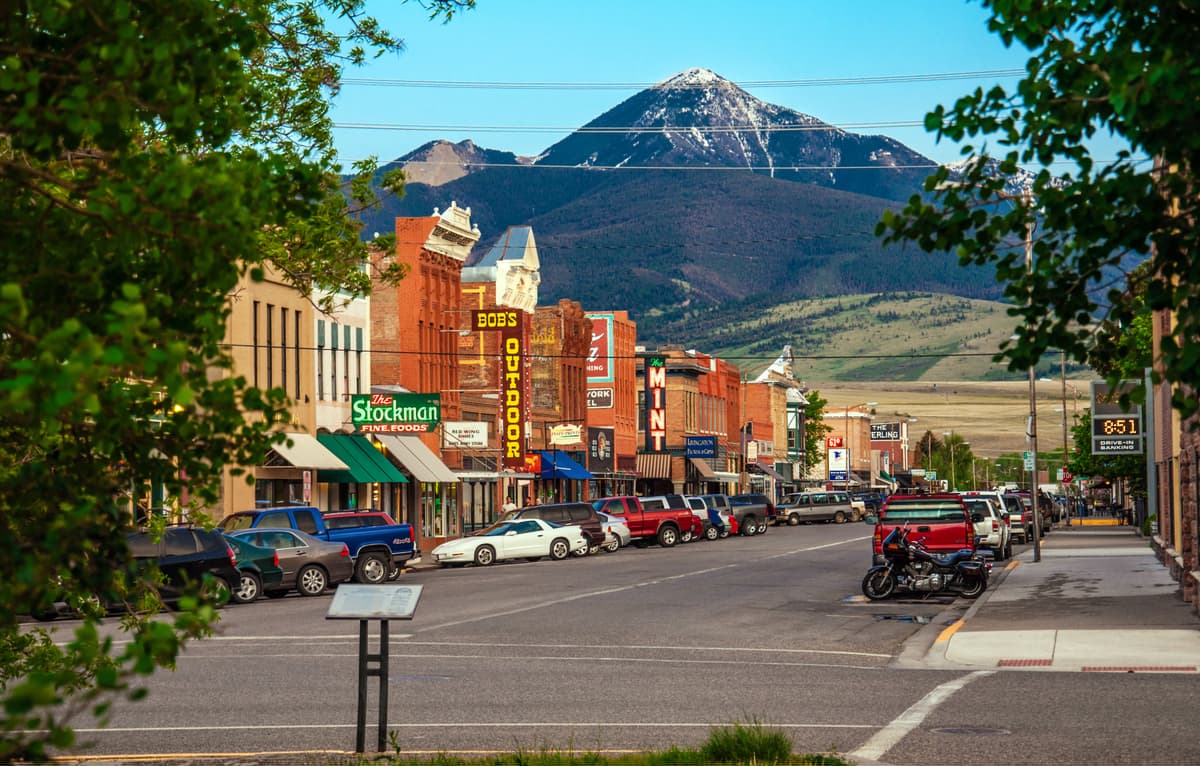 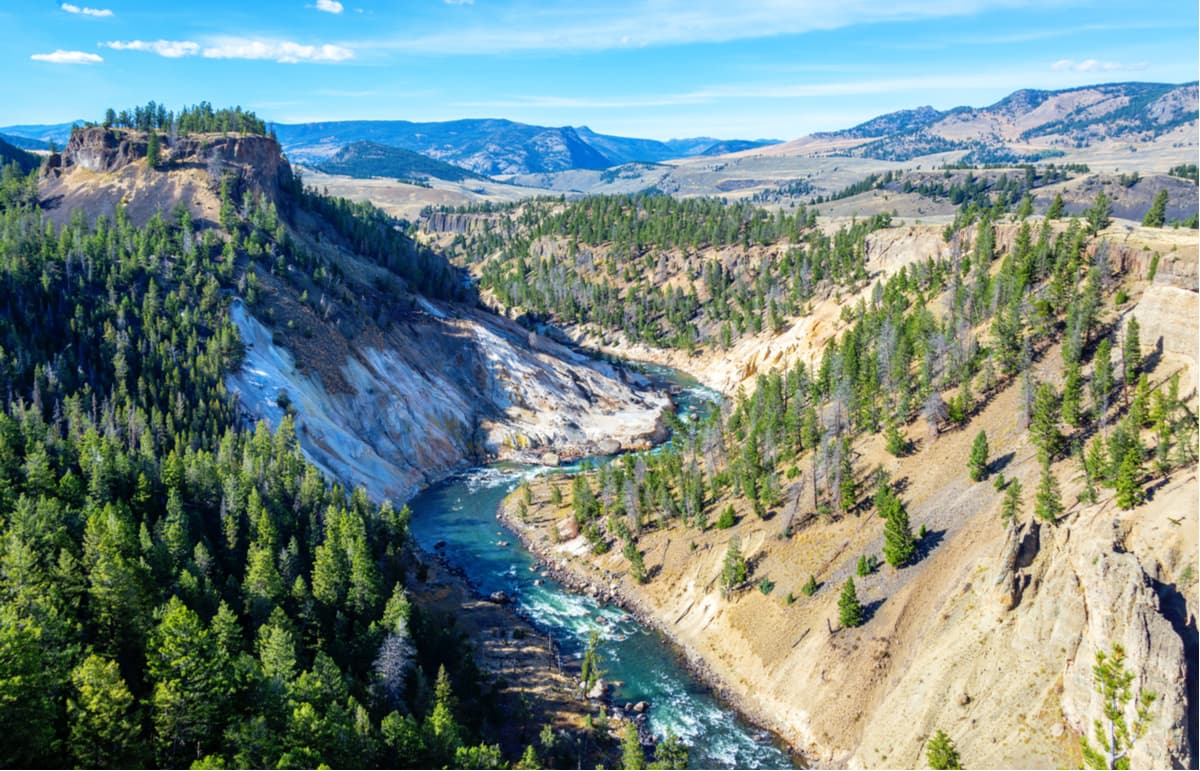