Craggy and remote, the Gros Ventre Range is a collection of mountains located in the western part of the US state of Wyoming. The range contains 48 named mountains, the highest and most prominent of which is Doubletop Peak (11,719ft/3,572m). 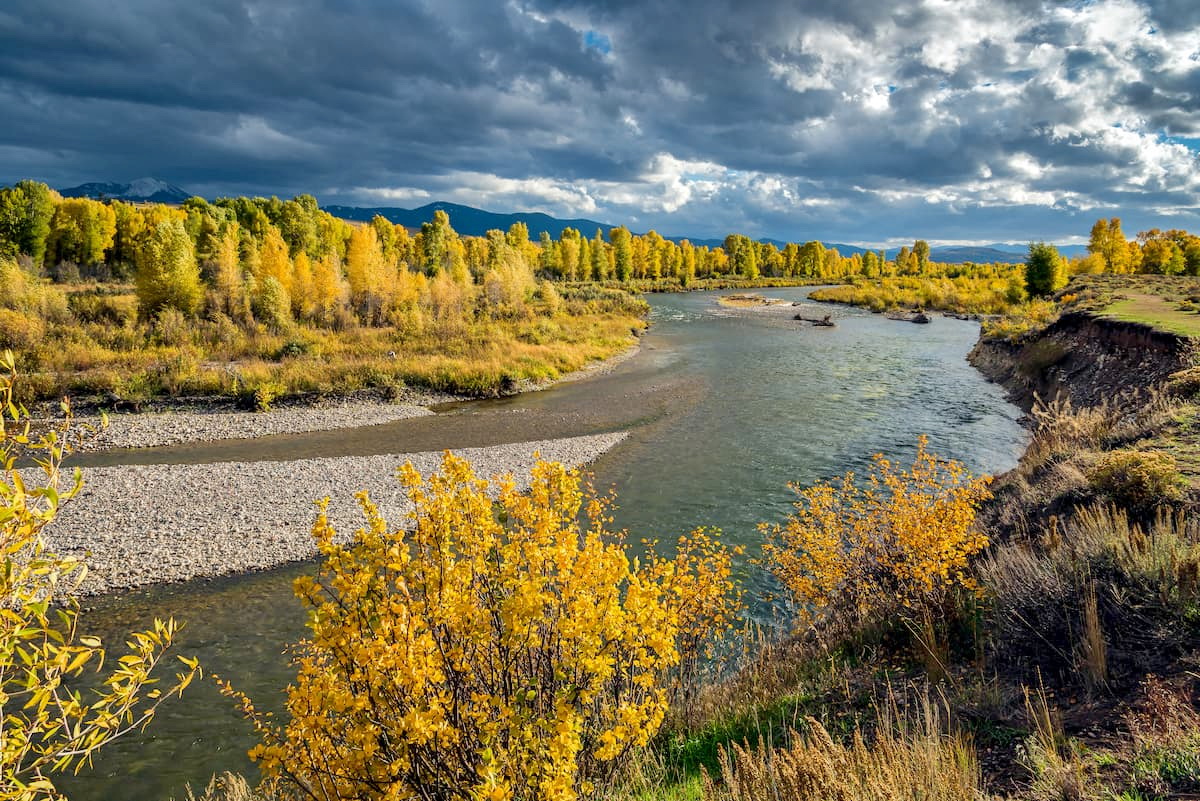 The Gros Ventre (pronounced groh-VAHNT) Range is situated in the western edge of Wyoming, near the state's border with Idaho. It covers a large area of land in Sublette and Teton counties between the cities of Pinedale and Jackson.

Despite being bounded by highways on 3 sides, the Gros Ventre Range is located in a highly mountainous part of Wyoming. The range is situated to the northwest of the Wind River Range, which extends out of its southeastern edge like a long arm.

Meanwhile, the Gros Ventre Range is bordered to the east by the Absaroka Range, which spans about 150 miles (240km) from the edge of the Wind River Range to the south to just north of Wyoming's border with Montana.

To the northwest of the range on the other side of Jackson Hole lie the Teton Range. Finally, across the border in Idaho sit the Elkhorn Mountains and to the south are the peaks of the Wyoming Range, the latter of which are actually some of the northernmost mountains in the Western Rocky Mountains system.

Moreover, the Gros Ventre Range is mostly contained within the Gros Ventre Wilderness and the Bridger-Teton National Forest, the latter of which extends far to the south and also includes the Wyoming Range.

Like much of the surrounding region, the Gros Ventre Range formed during the Laramide Orogeny, which occurred some 50 million years ago. The rocks within the range are complex and varied, with everything from sandstones, shales, limestones, breccias, and conglomerates to gneisses and schists at the basement with various granitic dikes and intrusions.

Moreover, the Gros Ventre Range is known for being particularly active, due to its history of massive landslides. Perhaps the most significant of the recent landslides happened in 1925, bringing about 50 million cubic yards (38.2 million cubic meters) of debris tearing down the northern face of Sheep Mountain.

This mass actually created a large dam on the Gros Ventre River, forming Lower Slide Lake. A few years later, the landslide dam burst and widespread flooding resulted. In fact, the resulting flood was approximately 6 fett (1.8m) deep for dozens of miles downstream, which eventually wiped out the town of Kelly and killed multiple people.

Although not as well known for its hot springs as the world-famous Yellowstone National Park to the north, the Gros Ventre Range does also have a few hot springs that you can check out. There are a few developed hot springs, such as the Granite Hot Springs Pool, as well as some other natural hot springs in the area.

Much of the Gros Ventre Range is undeveloped, which makes it an excellent habitat for the region's flora and fauna.

The range is heavily forested at the mid elevations and it features forests of Douglas fir, lodgepole pine, whitebark pine, aspen, and other spruce-fir woodlands. At the highest elevations in the range, the landscape transitions into alpine tundra, which is home to an abundance of wildflowers in the summer months.

Wildlife is particularly active in and around the Gros Ventre Range, including bighorn sheep, moose, deer, pronghorn black bears, grizzly bears, mountain lions, and wolves. Moreover, the range is well-known for its excellent elk spotting opportunities as it is the calving grounds for the large Jackson Hole elk herd.

Fishing is a particularly popular pastime in this part of the Rocky Mountains. Although there are more lakes and streams in the nearby Wind River Range, the Gros Ventre Range offers plenty of great places to cast lines in the Snake River, where you can find whitefish, brook trout, Snake River fine-spotted cutthroat trout, and other regional species.

Western Wyoming has a rich history of human culture and inhabitation that dates back thousands of years, and the Gros Ventre Range is no exception. Indeed, the range is considered the ancestral homelands of a number of many, including the Eastern Shoshone, the Apsaalooké (Crow), the Cheyenne, and their ancestors.

Perhaps the earliest Europeans and people of European descent to visit the region were fur trappers. Many of these fur trappers passed through the region just to the west of the Gros Ventre Range, though it's believed that John Colter of the Lewis and Clark Expedition was one of the first European-Ameircans to travel through Jackson Hole itself in the early 1800s.

The fur trade continued on for a few decades after the Lewis and Clark expedition, but by 1840 it mostly fizzled out. By the 1880s, the US Government embarked on a fairly concerted effort to map and survey the region, though most of their focus was on the nearby Teton Range.

Even though the few early mining attempts in the Jackson Hole area during this time failed, the late 19th century saw the start of some of the earliest homesteads in the region. In particular, John F. Patterson established a town just southwest of the range in 1904, which would later be named Pinedale.

The city became a hub for the region's ranchers, miners, and railroad workers, making it particularly important as the Union Pacific Railroad expanded into Wyoming during the early part of the 20th century. Interestingly, Pinedale was one of the few incorporated towns in the country that wasn't near a railroad - the closest station was in Rock Springs. However, Pinedale had a big railroad tie industry which made it important in the railroad's development.

This period also saw the start of the dude ranch industry as many tourists (known as “dudes”) would pay local guides to take them into the Gros Ventre Range, the Wind River Range, and the surrounding region.

The 1930s also saw the construction of the Snow King Mountain Ski Resort in the Gros Ventre Range, which was actually the first ski resort in Jackson, predating Jackson Hole by nearly 3 decades.

Parts of the region were first put under federal purview in 1908 and 1911 with the establishment of the Teton and Bridger (then called Wyoming) National Forests. These 2 forests were administratively combined in 1973 and they cover a substantial portion of western Wyoming. The Gros Ventre Wilderness was also established in 1984, placing a large part of the Gros Ventre Range under permanent protection.

Although the Gros Ventre Range is often overshadowed by the Teton Range to the west and the Wind River Range to the east, it is a worthy destination in its own right. The range is particularly popular among folks looking for solitude and some great wildlife encounters.

There are plenty of off-trail adventures to be had in the Gros Ventre Range, as well as some fun hiking trails to check out. Here are some popular places to visit if you're in the area.

The Grizzly Lake Trail is a 4.8 mile (7.7km) trail that offers a moderate walk to the scenic Grizzly Lake. It offers nice views of the Tetons, some beautiful forests, and even, as the name suggests, a lake, which makes for a great place to swim on a hot day.

Another great hike, the trail to Godwin Lake is approximately 5.7 miles (9.2km) long and climbs steadily uphill with great views of the Tetons for most of the journey. The trail is highly popular as swimming and relaxing at Goodwin Lake is a fun summer pastime. You can also continue on the trail to the summit of Jackson Peak, however, the section of the trail beyond the lake is not maintained.

The Cow Creek Trail is 12 miles (19km) long and leads to the summit of Cream Puff Peak. This trail involves quite a bit of climbing along the way, though the views and the solitude make it well worth the effort.

The Gros Ventre Range is situated in a fairly rugged section of Wyoming, though there are a few towns to visit out if you're in the area. Here are some of the best places to stay near the range.

The city of Jackson is situated just to the west of the Gros Ventre Range. It is home to just around 10,000 residents and it is a well-known destination for outdoor adventure, thanks to its proximity to Grand Teton National Park, Yellowstone National Park, and the National Elk Refuge.

Jackson is also home to the busiest airport in Wyoming, the Jackson Hole Airport, which also holds the unique distinction of being the only commercial airport in the US that's actually within the boundaries of a national park.

Pinedale is a small town located to the southeast of the Gros Ventre Range. It is home to about 2,000 residents and it is considered a gateway to the Wind River Range and the surrounding region. Although Pinedale is only accessible by road, it is just 1.5 hours from Jackson and just under 4 hours from Salt Lake City. 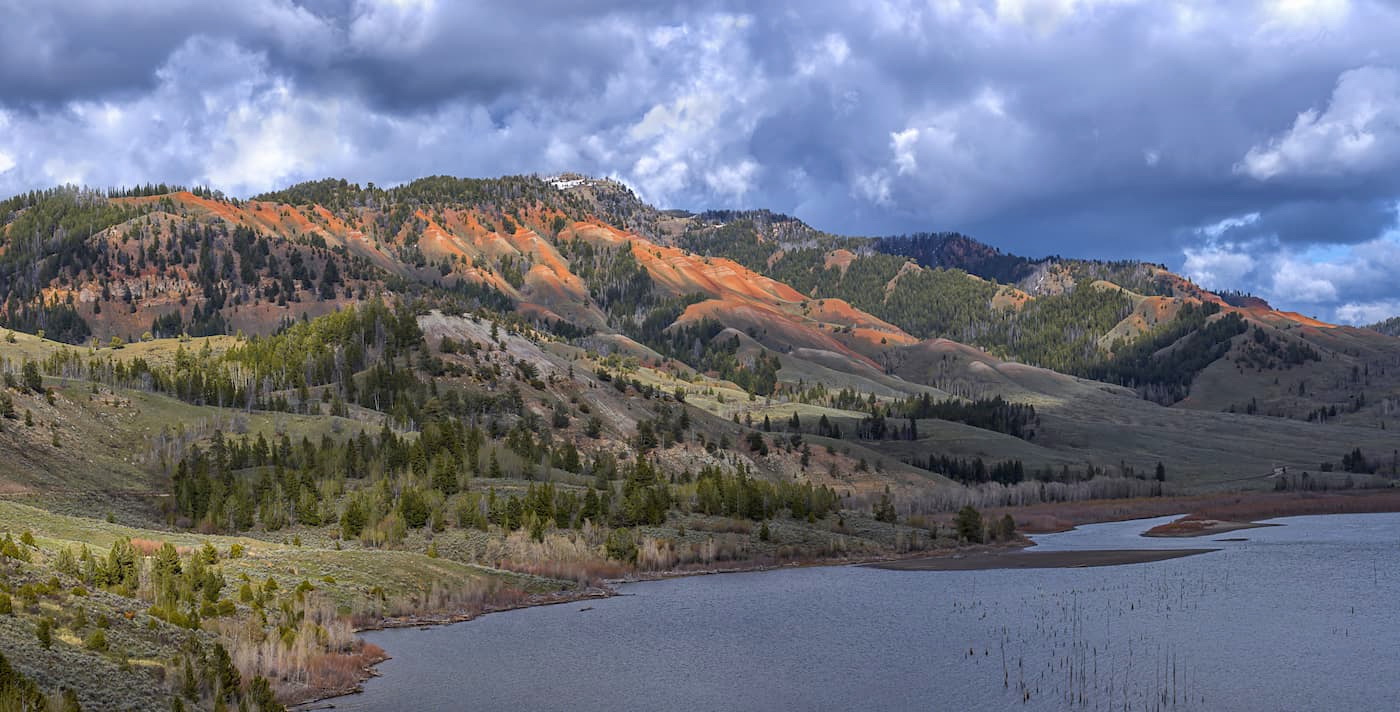 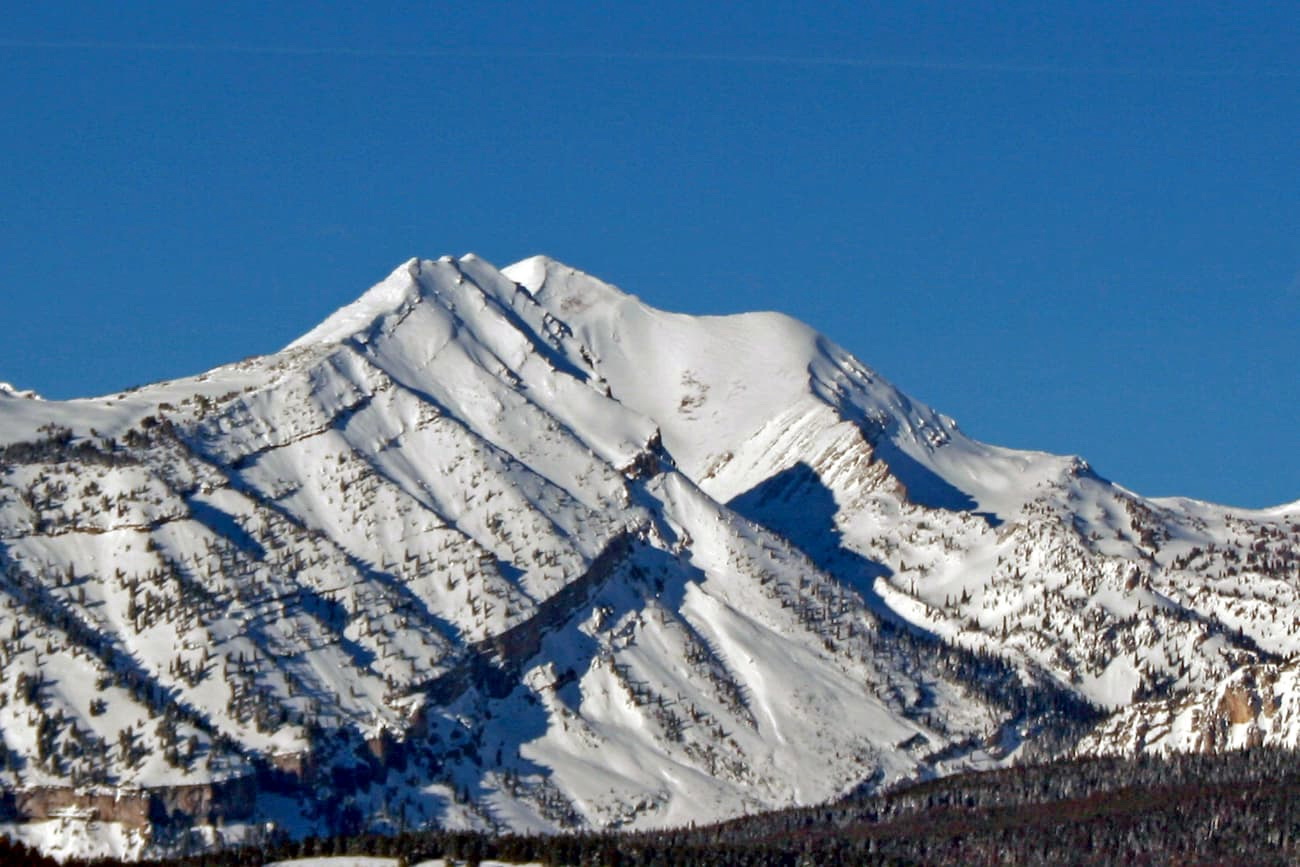 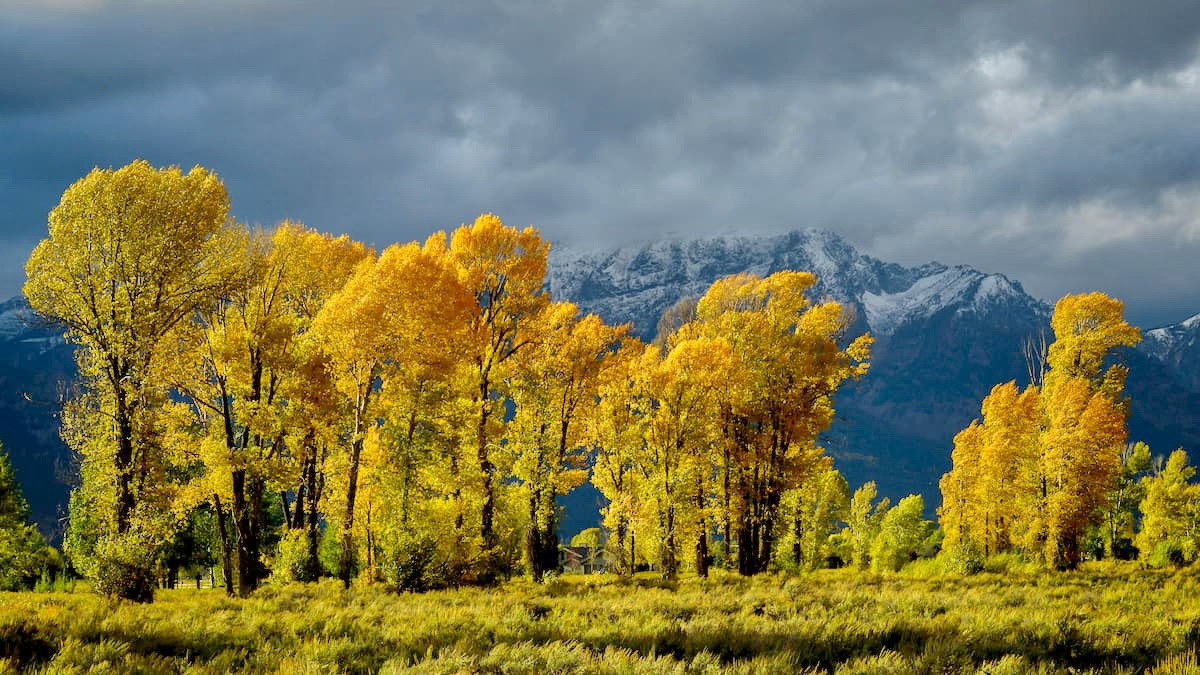 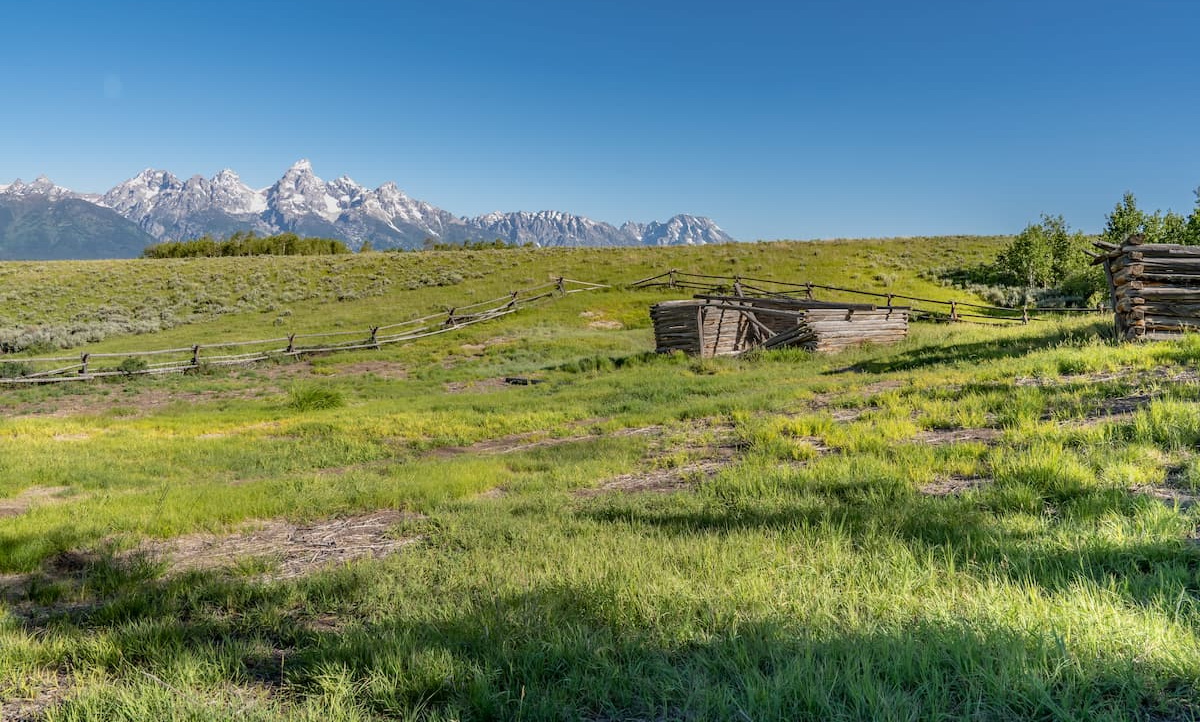 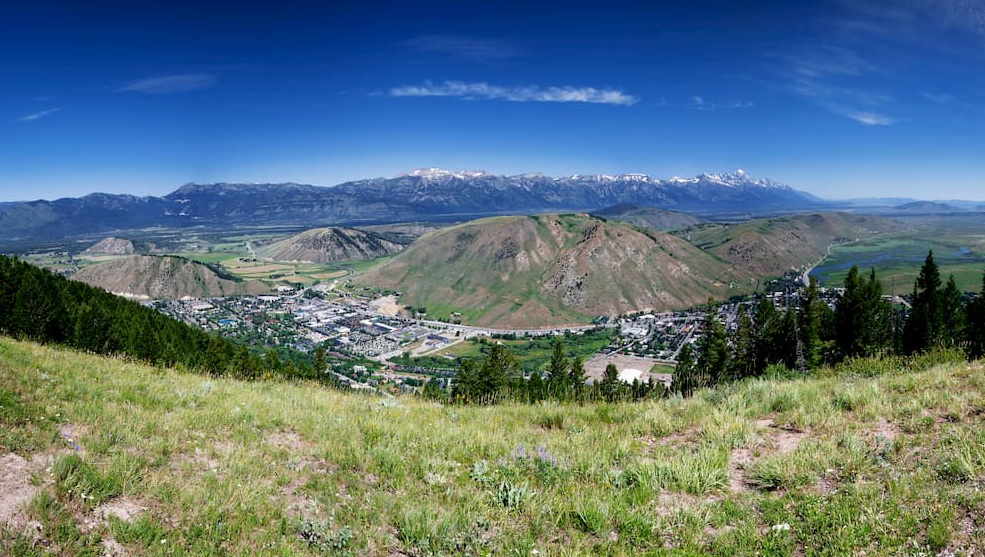 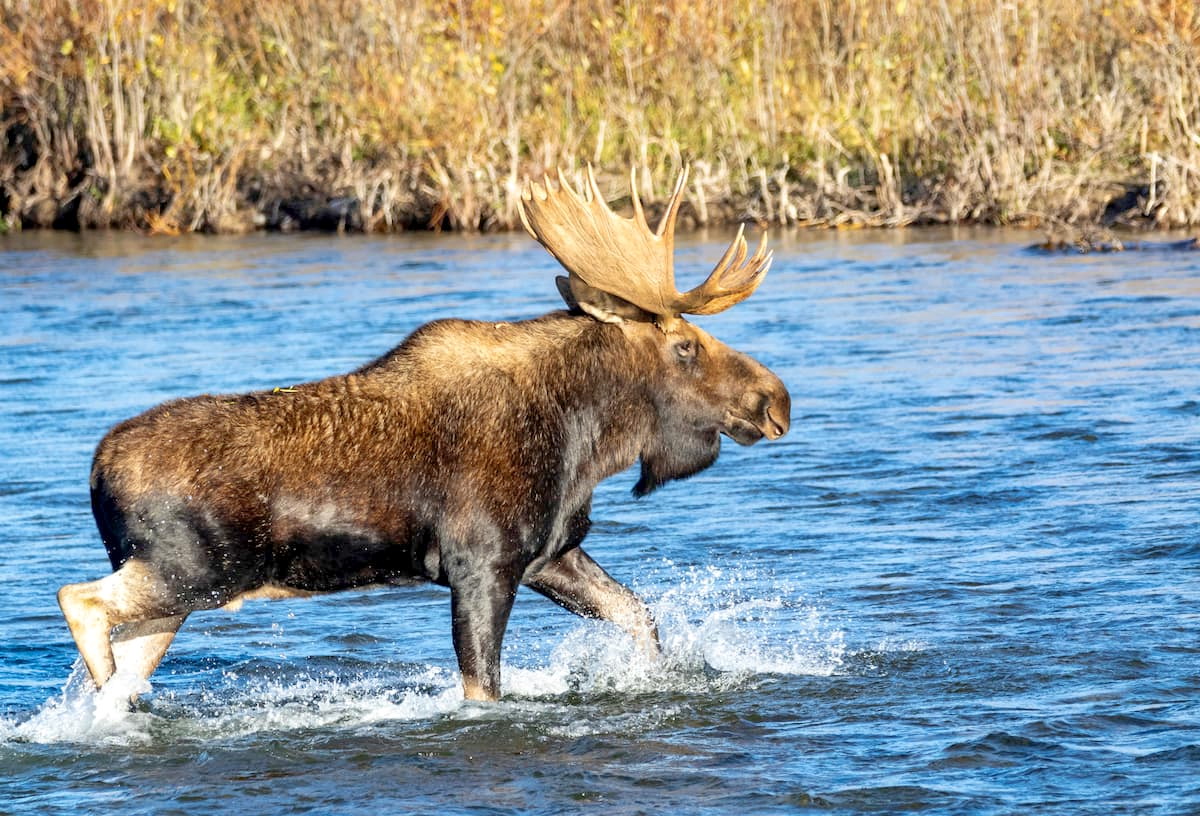