Located in the northwestern corner of the US state of Wyoming, Grand Teton National Park is a veritable oasis of adventure for climbers, hikers, and skiers, alike. Home to one of the most distinctive mountain chains in all of North America, the Teton Range, Grand Teton National Park is a scenic mountain wonderland with endless adventure opportunities.

Within Grand Teton National Park, there are 56 named mountains, the highest and most prominent of which is the Grand Teton (13,776ft/4,199m), a time-honored classic climb in the mountaineering world. Many of the national park’s mountains are considered classic hikes, climbs, and ski descents among mountain enthusiasts, including the range’s second highest peak - Mount Owen (12,928ft/3936m) - and the venerable Sickle Couloir on Mount Moran (12,605ft/3,843m).

Although the mountains and stunning scenery are what currently draws visitors to the Grand Teton National Park and the surrounding region, the area around the modern-day park boundaries has been inhabited by humans for at least the last 11,000 years. The first people to live in the Teton region were likely people of the Paleo-Indian tradition, who migrated toward the mountains in the warmer months in the search of food and supplies.

Back in those days, the Jackson Hole valley, which is found on the eastern edge of the National Park, was much colder and more alpine than the climate we see today. So, it is likely that these original inhabitants had followed the elk migration from the lower valleys west of the modern-day park boundaries high into the alpine of the Teton Range.

When the first white migrants arrived in the area, they encountered the Eastern Shoshone people who lived in the vast Yellowstone for countless generations. The Shoshone people who spent most of their time in the mountains were known as Tukudika or “Sheep-eaters,” as the main staple of their diet was the region’s endemic Bighorn Sheep.

Although the eastern Shoshone people have a close spiritual connection to and relationship with the Teton Range, after years of conflict and broken treaties, they were eventually forced into relocation on the Wind River Indian Reservation far to the southeast of the park (100 miles southeast of Jackson Hole) in 1868.

After the arrival of Lewis and Clark during their 1807-1808 trans-continental journey. Fur trappers, led by expedition member John Colter, set up shop in the Teton Range, which left a lasting negative impact on the area’s beaver population. A number of companies tried and failed to set up mining operations in the region around Jackson Hole, but eventually, these new settlers realized the region was better for cattle ranching and hay cultivation, which is what they then dedicated their efforts to.

While the Teton Range, much like the rest of the Rocky Mountains, was a large obstacle to westward white settlement in the expanding United States, the establishment of roads from Jackson Hole over Teton and Togwotee Passes to the north and south of the range, as well as the expansion of the automobile’s popularity in the 1920s, made it easier for people to pass through the area. This led to a dramatic rise in tourism, especially among dude ranches and outdoor recreationalists.

After Yellowstone National Park was established in 1872, many conservationists wanted to increase the park’s boundaries to include the stunning Teton Range. However, local Jackson Hole residents were against expanding Yellowstone, instead preferring the creation of a separate Teton National Park. On February 26, 1929, President Calvin Coolidge, on the heels of congressional approval, signed an executive order to formally create the 96,000 acre (39,000 ha) Grand Teton National Park.

Recreational outdoor pursuits have been a staple of the region surrounding Teton National Park since the arrival of white travelers, trappers, and traders in the late 1800s. While there is strong evidence to suggest that people of the nearby Wind River Range and people of the Teton Range had lived as high as 12,000ft (3650m) in the mountains and climbed as high as 13,000 feet (4,010m), the earliest white mountain climbers had a lot of difficulty climbing these peaks, which they were drawn to out of desire for first ascents.

After the first recorded ascent of the Grand Teton by William Owen, Franklin Spencer Spalding, and company in 1989, many new routes were put up on the mountain, spurring a long and storied history of climbing in the region that has continued to this day. While the range’s sharp, jagged peaks have long captivated climbers, these days, there are plenty of great hikes in Grand Teton National Park to excite any outdoor recreationalist.

In a range as beautiful as the Tetons, it’s easy to imagine that opportunities for hiking abound. The park itself has over 230 miles of maintained trails, so there are plenty of options for everyone. Do keep in mind that the Tetons are known bear country, so bear spray should be carried and bear safety practices should be employed at all times.

Plus, if you’d like to backcountry camp in the park (highly recommended!) you’ll need to apply for a permit through the park’s backcountry reservation portal. Grand Teton National Park is incredibly popular, so be sure to plan ahead to avoid disappointment!

That being said, here are some of the top hiking areas in Grand Teton National Park:

This hike to Holly Lake takes you 13 miles (20.9km) out and back to a series of stunning alpine lakes. From the String Lake Trailhead, you hike up into Paintbrush Canyon until you reach the Holly Lake Junction. After the junction, you have just another half mile of walking to the lake and the panoramic views that surround it!

On this long day hike or comfortable overnight, you hike 25.8 miles (41.5km) round trip on the Jenny Lakes Trail to some of the park’s best views. This walk starts at the Jenny Lakes Trailhead, taking you 4.5 miles down a flat canyon before heading uphill for 4,000 feet (1220m) of elevation gain, past Schoolroom Glacier to Hurricane Pass at 10,400 feet (3170m).

Once you make it to the pass, you get amazing views of the Grand, Middle, and South Tetons - Les Trois Tetons. This is a popular backpacking trip, so be sure to reserve your permits in advance!

One of the most strenuous trails in Grand Teton National Park, the Static Peak Divide Trail takes hikers into the foreboding Death Canyon before climbing up to Static Peak Divide. The trail itself shoots up to a high elevation over a series of very steep switchbacks, so it’s best to keep an eye out for altitude sickness along the way.

While the pass can have snow until July, the views from the top for those who are prepared for the 16.3 mile (26.2km) roundtrip challenge are truly a wonder to behold.

This moderate hike up Signal Mountain (7,720ft/2354m) provides amazing views of Jackson Hole and the Teton Range. The trail starts at the Signal Mountain Lodge before winding upward through dense forest to the mountain’s summit. After 3.4 miles (5.4km) one way, you’ll stand at the top of Signal Mountain and be treated to panoramic views of the stunning Tetons. What more could you want?

Although Grand Teton National Park is located in a very rural part of northwestern Wyoming, the region’s popularity, especially among skiers in the winter months, means the region has a lot of great resources and places to stay just outside the park boundary. However, just an hour’s drive away from the park takes you into some pretty remote territory, so unless you’re looking to backcountry camp, you’ll want to head to one of these two towns:

Located at the eastern foothills of the Teton Range, Jackson, Wyoming (and the nearby smaller villages) is a climber and skier’s paradise. The town has seen a huge surge in population and popularity in recent years, which means you can expect high prices and some overcrowding, especially at the height of winter and summer.

But, with the town’s excellent location and an airport nearby that is serviced by major airlines, such as Delta and United, as well as all the outdoor gear, food, and supplies you need, it’s hard not to want to go to Jackson on your trip to the Tetons.

Located on the other side of Teton Pass, Victor, Idaho is a short drive from the eastern entrance of Grand Teton National Park. In the winter months, it can be difficult to get between Victor and Jackson, as the steep Teton Pass road is often closed due to deep snowfall, but in the summer, it’s a great place to stay if you want to access both sides of the range. Plus, in the winter months, you can stay on the west of the Tetons and head to the slightly less crowded, but still awesome Grand Targhee Resort for some fantastic skiing. 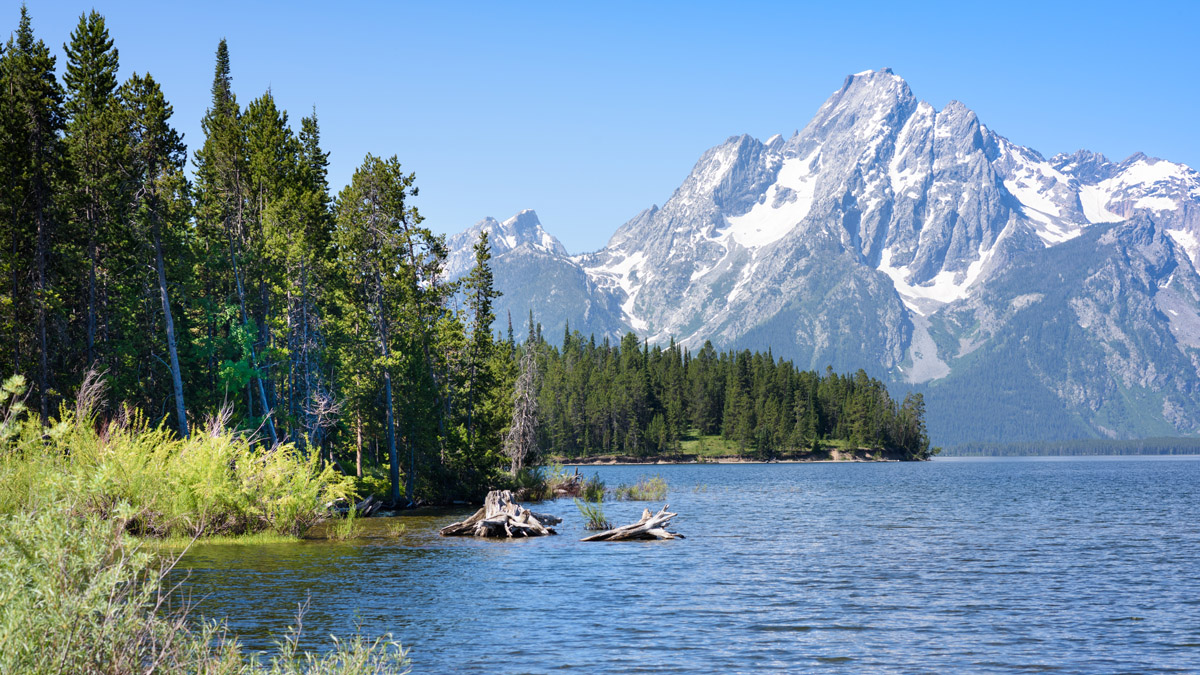 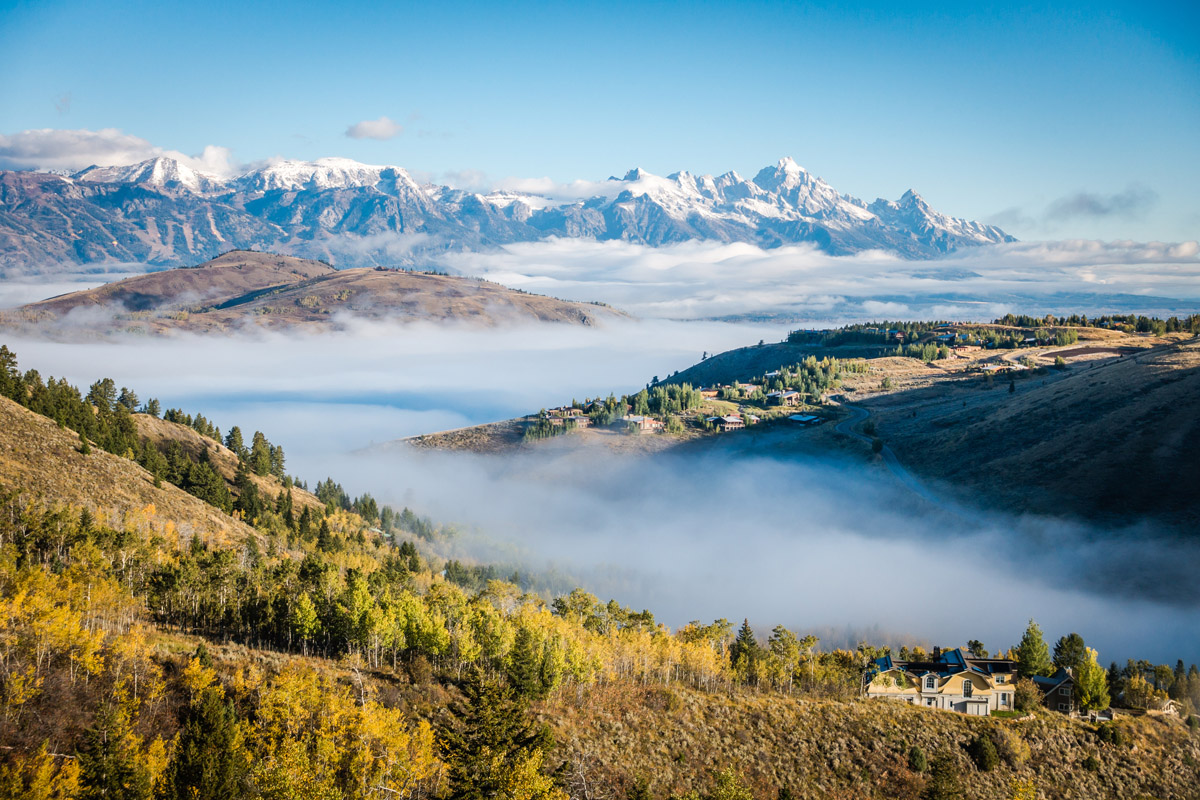 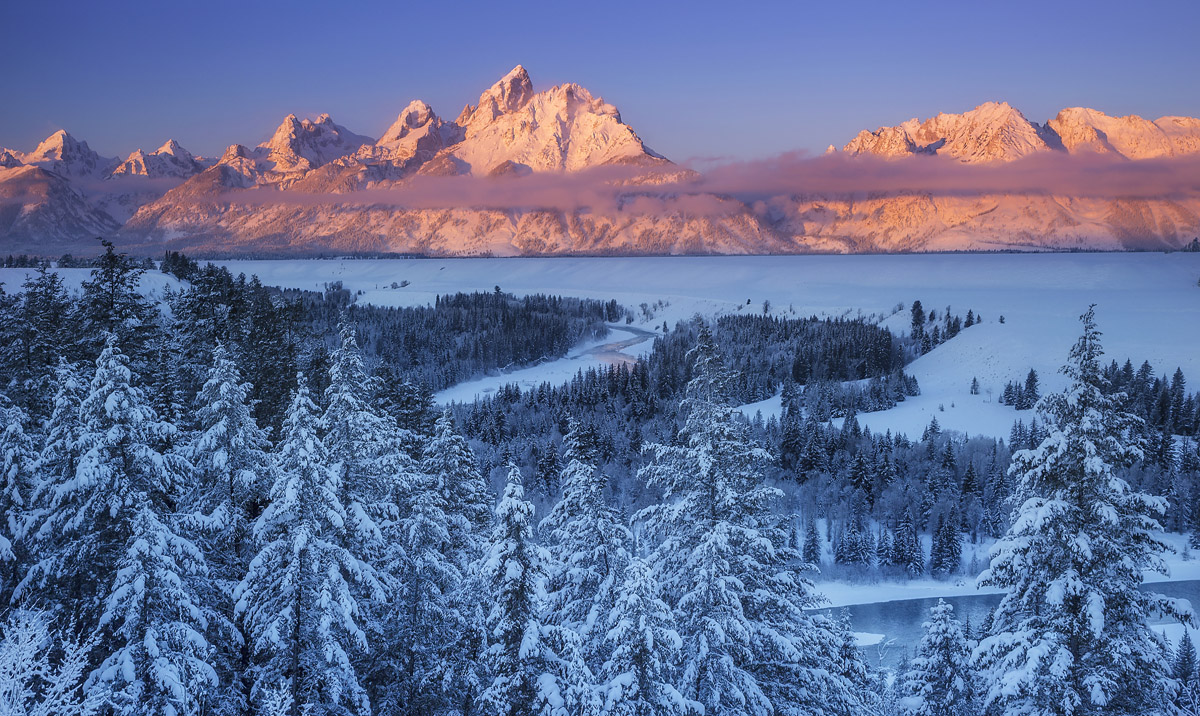 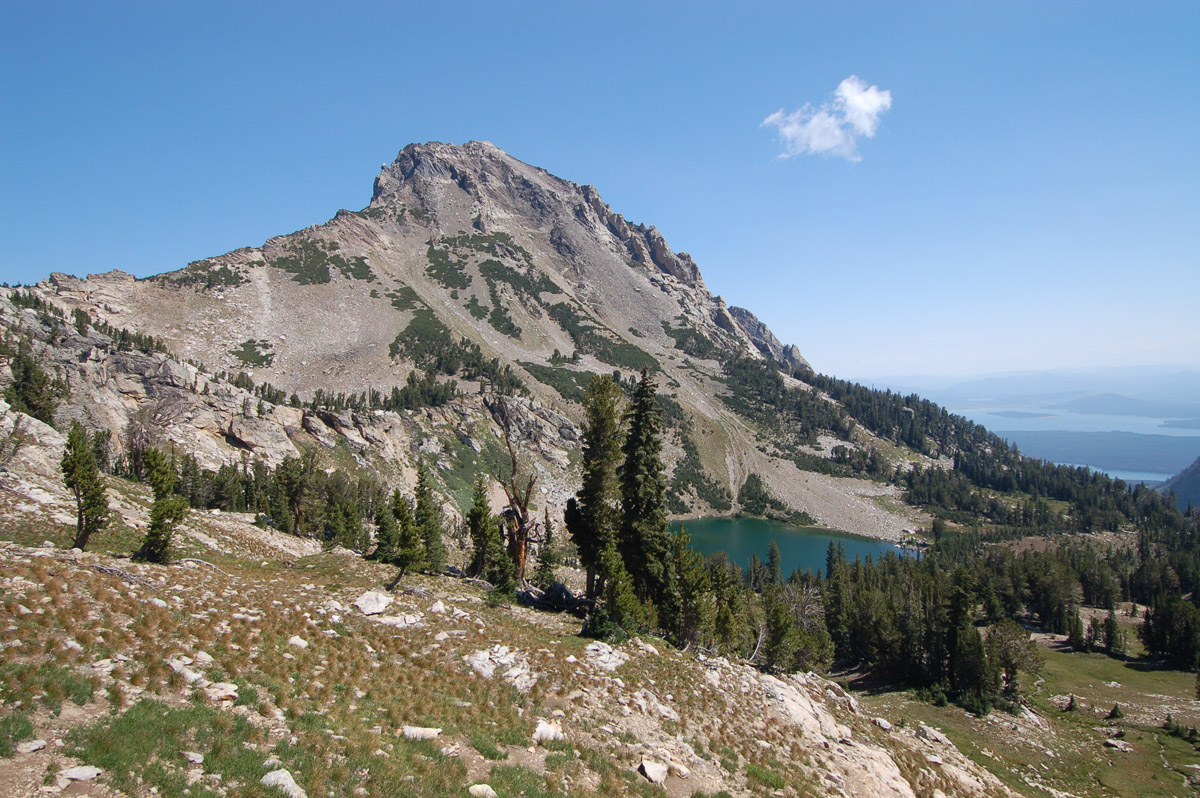 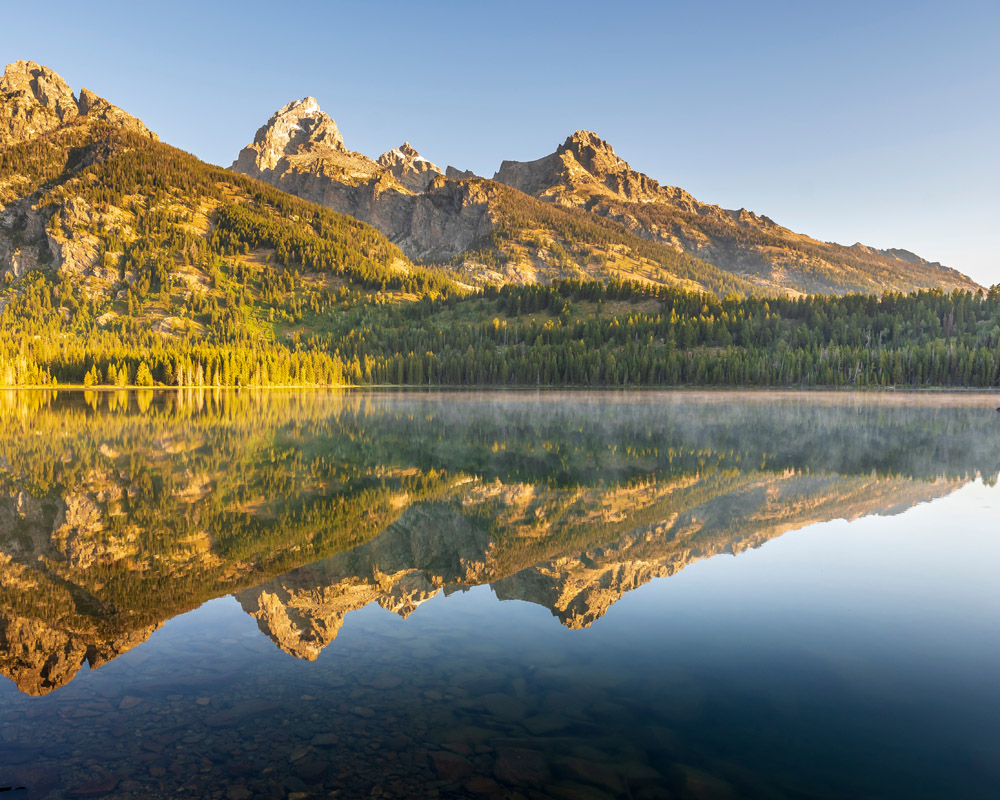