Ben Nevis is located towards the western end of Grampian Mountains in the Lochaber area of the Scottish Highlands, close to the town Fort William. The mountain is a popular destination, attracting an estimated 100,000 ascents per year. The summit is the collapsed dome of an ancient volcano.

The area north of the Highland Boundary Fault is known as the Scottish Highlands, and contains the majority of the country’s mountain ranges. The southern and eastern parts of Scotland are known as the Scottish Lowlands. The Lowlands are made up of the Midland Valley and the Southern Uplands regions. In Scotland there are 7,326 named mountains spread across the various mountain regions.

The Midland Valley consists of rolling plains and volcanic outcrops. The Southern Uplands stretch across southern Scotland from Galloway to the Borders.

Scotland’s mountains were formed after the collision with the eurasian plate. The oldest rocks of Scotland are the Lewisian gneisses, which were formed in the Precambrian period, 3000 million years ago. They are among the oldest rocks in Europe and the World. 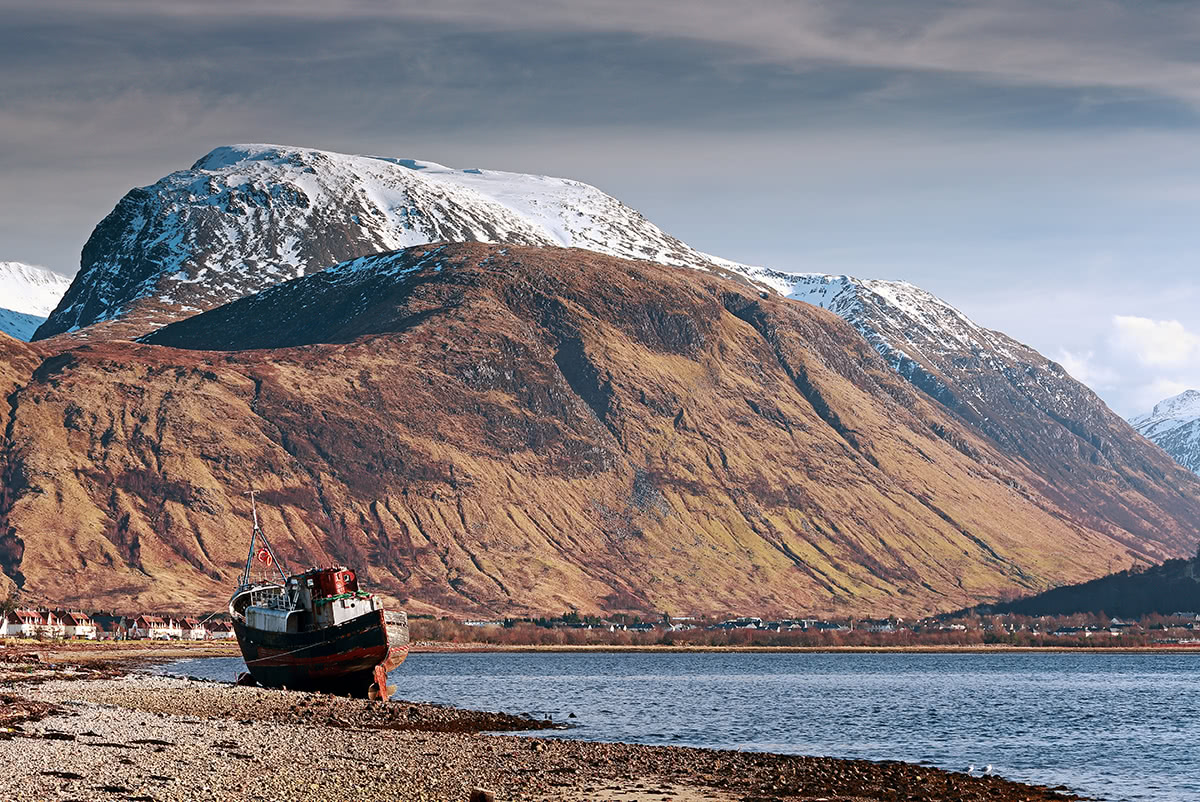 Scotland has a very positive attitude towards hiking and walking in general. Traditionally there was the presumption of universal access to land. This was confirmed under the Land Reform Act 2003. It allows everyone the right to be on most land providing they act responsibly. Scotland is ready and waiting to be explored!

A Munro is the special name for a mountain in Scotland with a height of over 3000 feet (914.4m). The most recognisable Munro is Ben Nevis, equally the highest mountain in the British Isles. The name Munro originates from Sir Hugh Munro (1856-1919) who produced the first list of all of the relevant hills and mountains. These are known as Munro’s Tables. As of 2012 there is a total of 282 Munros. A rather popular hiking challenge is to ascend all of the Munros - this act is known as ‘Munro bagging’.

There are several other names for peaks of different heights:

Glasgow - The largest city in Scotland, and the third largest in the United Kingdom. Glasgow is situated in the West Central Lowlands. It is an ideal location if you want to head to Loch Lomond and the Trossachs national park 60 km north west of the city.

Edinburgh - The capital city of Scotland, is located in Lothian, a region in the Scottish Lowlands. The city hosts the yearly Fringe, the world’s largest international arts festival. Edinburgh’s Old Town and New Town are both listed as UNESCO World Heritage sites. Edinburgh Castle is an iconic tourist attraction built on the volcanic Castle Rock.

Aberdeen - A port city located in the north east of Scotland on the North Sea coastline. Whilst the sandy beaches are worth exploring on their own merit, one of the main reasons to come to Aberdeen is for its proximity to the Highlands. If you travel around thirty minutes west you will find yourself surrounded by picturesque views of Scotland, with the Cairngorms National Park also only one hour away from the city.

Inverness - Located in the Scottish Highlands, Inverness is the UK’s northernmost city. It is regarded as the capital of the Highlands and is situated 40 km from the Cairngorms. It is the location of the events that inspired Shakespeare's play MacBeth (the Gaelic king Mac Bethad (MacBeth) killed King Duncan). In 2014 Inverness was described as the happiest place in Scotland - whilst we cannot be sure, we reckon it was the result of the copious amounts of hiking on offer!

Dumfries - A large town in the south of Scotland near the border to England. Dumfries is good place to stay whilst visiting the local countryside. To the west there is the Galloway Forest Park. To the south there is Hadrian’s Wall - a defensive fortification that stretches across the UK mainland on the border with Scotland and England. Hadrians wall is said to have inspired Game of Thrones writer, George R.R Martin’s ‘Wall’.

Scotland has excellent access with most of the larger cities being served by airports. There is equally an extensive rail network throughout the country. One of the most famous routes crosses the Glenfinnan Viaduct in Inverness-shire, recognisable from its use in the Harry Potter movies.

The climate in Scotland is quite changeable. It tends to have mild but wet winters as a result of the Gulf Stream, however the temperatures are typically cooler than the rest of the UK. The western highlands are amongst the wettest places in Europe. Snowfall is not uncommon during the winter months at higher altitudes.

The summer months would be the best to visit if you are looking for more settled weather and warmer temperatures (with average highs of 15-17°C). Although the spring, autumn and winter colours would also be worth experiencing. 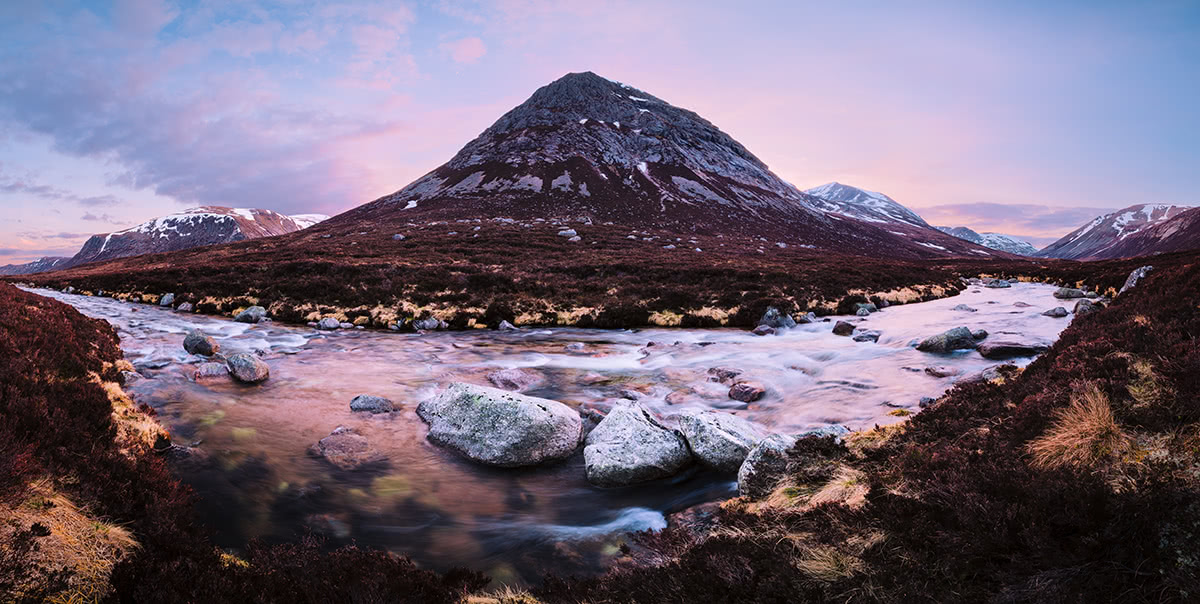 The Devil's Point from the River Dee in the Cairngorms National Park.

Scotland’s wildlife is typical to that of north western Europe. Home to over 90,000 species, Scotland has a rich and diverse natural history which attracts thousands of wildlife-enthusiasts each year. Throughout the year various flowers, plants, trees and fungi which can be easily identified.

One of Scotland’s most famous creatures is from folklore: Nessie, the Loch Ness Monster, who is said to reside in Loch Ness in the Scottish Highlands. There has been no proof of existence despite many attempts and several hoaxes. Believe the folklore or not, the temperature of the Loch is more than enough reason to deter you from going for a swim!

Arthur’s Seat (251m), Edinburgh - The hill rises above the city and offers excellent panoramic views of the city below. It is a must see for anyone staying in Edinburgh. The views of Edinburgh Castle are well worth the effort! This is an easy hike that is open to all. You could repeat or extend the loop if you want more of a challenge. Estimated time. 2 hours. 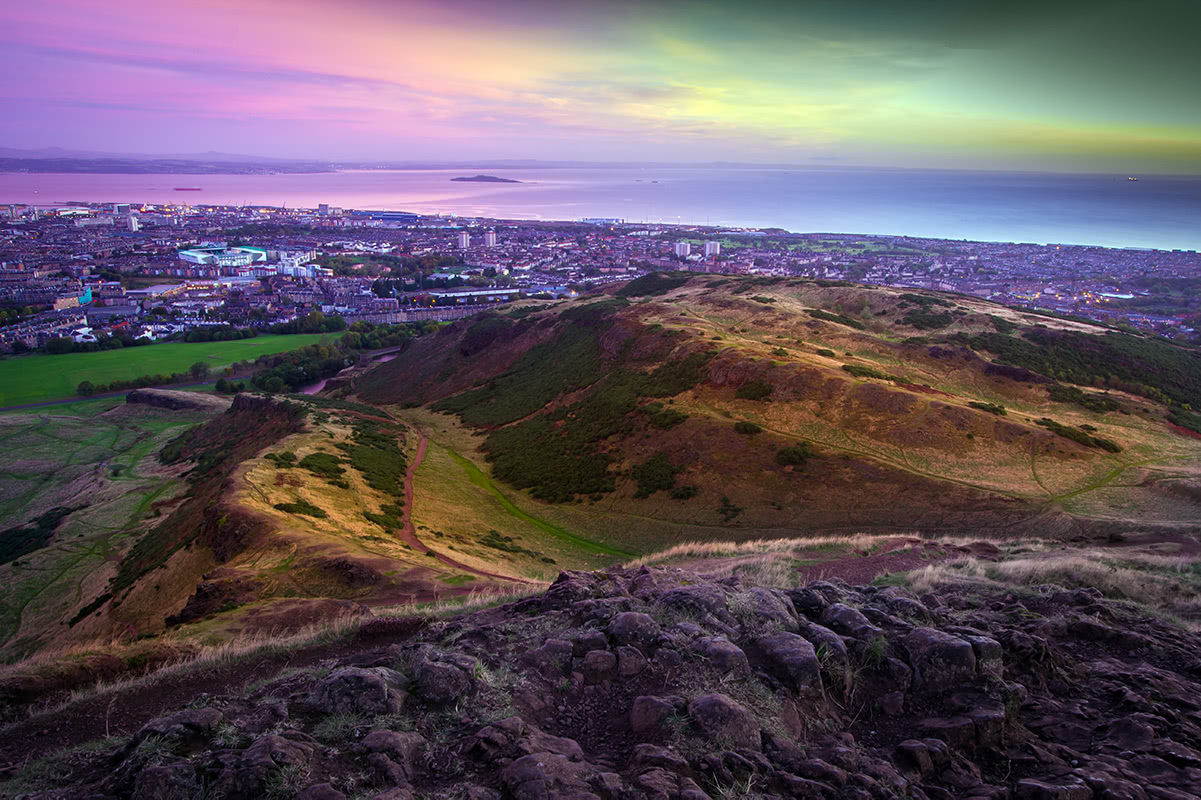 There is a loop that takes you around Holyrood Park of 6km taking in the various peaks in the park. Starting at the base near the Royal Commonwealth Pool and hiking up to The Nether Hill, Crow Hill and then Arthur’s seat. You can continue on to Dunsapie Crag and the loop back around to Arthur's seat and down.

Bidean Nam Bian (1150m), Glen Coe - Situated near Glen Etive, the backdrop to James Bond’s Skyfall, is one of the highest peaks in Scotland. There are a number of hikes in the area through woodland, past waterfalls and up into the clouds.

Starting from Loch Achtriochtan, follow the trail to Bidean Nam Bian passing over Stob Coire Nam Beith. Once at the summit you will have a breathtaking view of the surrounding peaks and the glens below. You have a choice to either descend the same way that you came (giving you a total distance of 6km) or continue your hike down the Allt Coire Gabhail valley to the north. Once you get to the end of the valley, head east along the River Coe back to the start. The total distance for this hike is 12.8km with a total elevation gain of 1066m. Estimated time. 4 hours.

Ben Nevis, Inverness-shire. It would be impossible to not include Britain’s highest peak (1344m) in this list. Ben Nevis is a top destination for avid hikers coming to Scotland and provides an excellent challenge. The route consists of rocky paths and panoramas of the Scottish wilderness at every turn.

Starting from Cafe Beag on the outskirts of Glen Nevis, follow the Ben Nevis mountain track all the way to the summit (the most popular ascension). There is a total of 1300m of vertical elevation over 14km (there and back). The route is best attempted in the summer months, although it is open all year around, you would need to be sufficiently prepared in the winter. Estimated time. 7 hours

Beinn Alligin (986m), Wester Ross is located on the North Western coast of Scotland. The peak’s name in English is the ‘Mountain of Beauty’. The scenery in this wild part of the Scottish Highlands is some of Scotland’s finest. From the peak you will have views of the surrounding peaks and out into the North sea and the rocky islands of Skye, North Uist and Lewis and Harris. Starting from the Beinn Alligin carpark, there is an excellent 10km loop up to the peak via the adjacent summit of Tom Na Gruagaich (922m) with a total elevation gain of 890m. Estimated time. 5 hours. 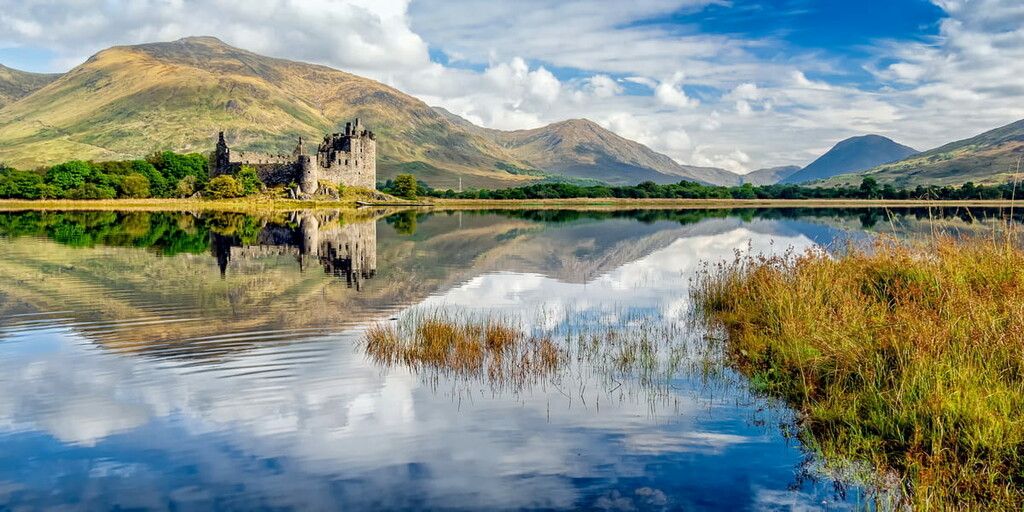 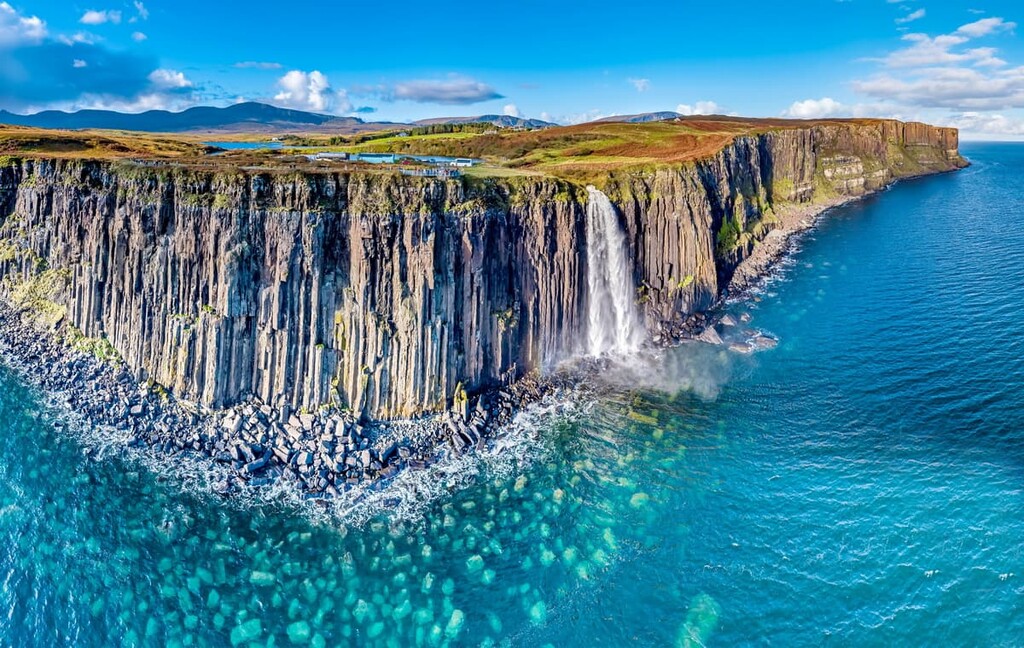 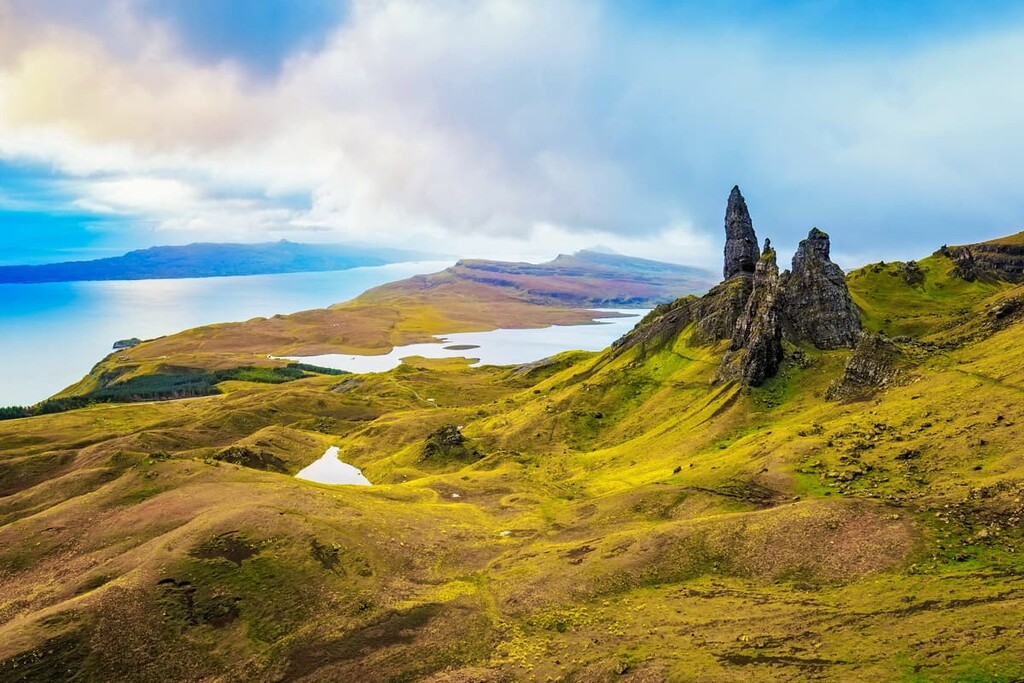 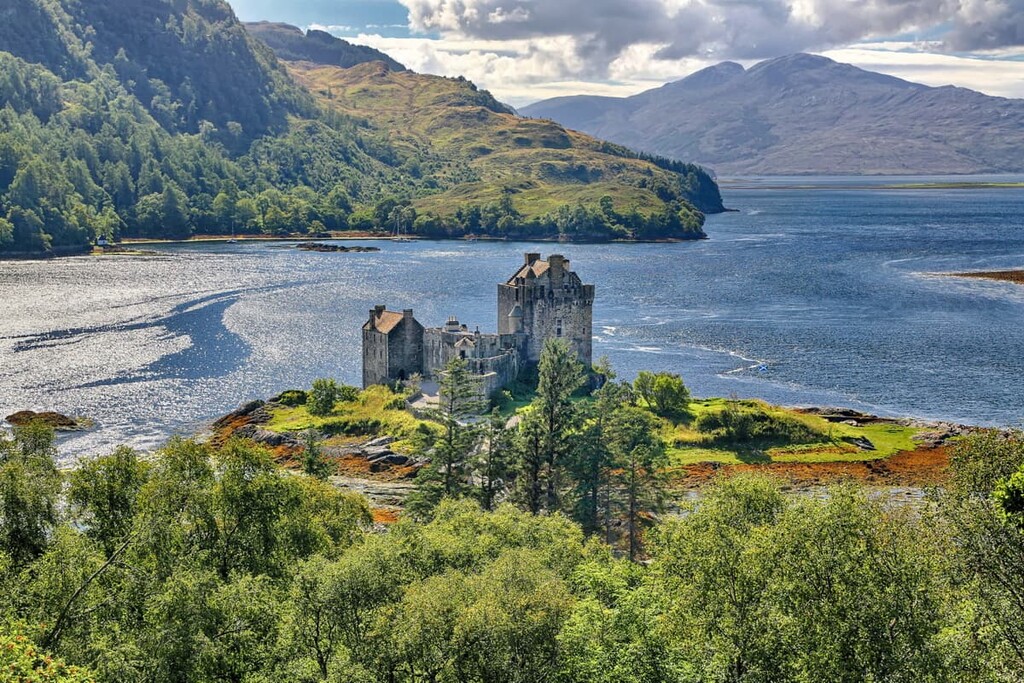 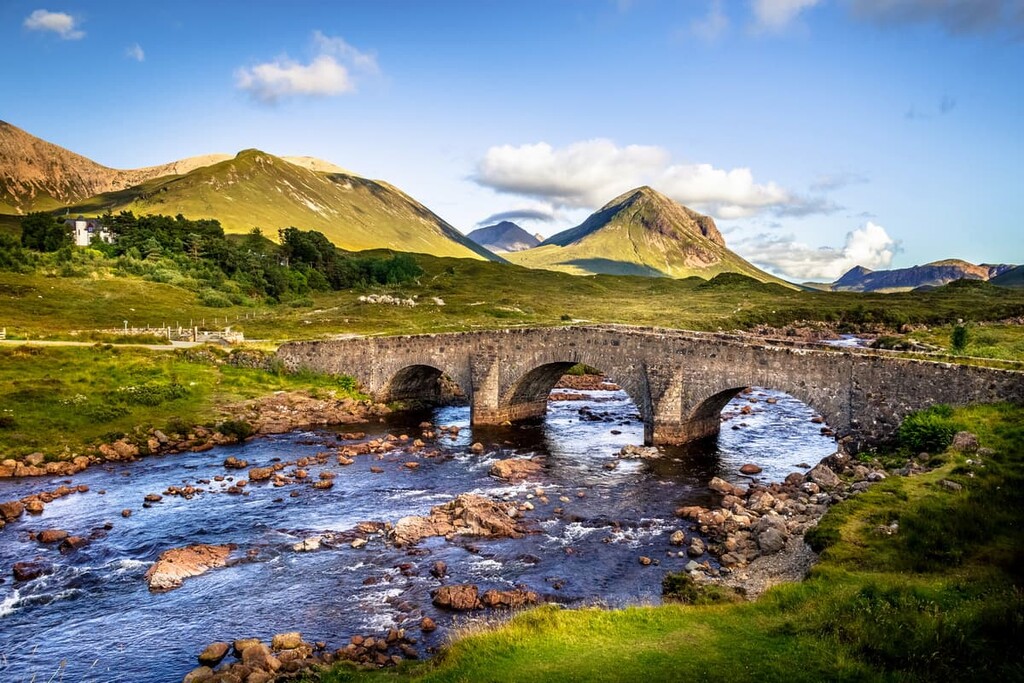