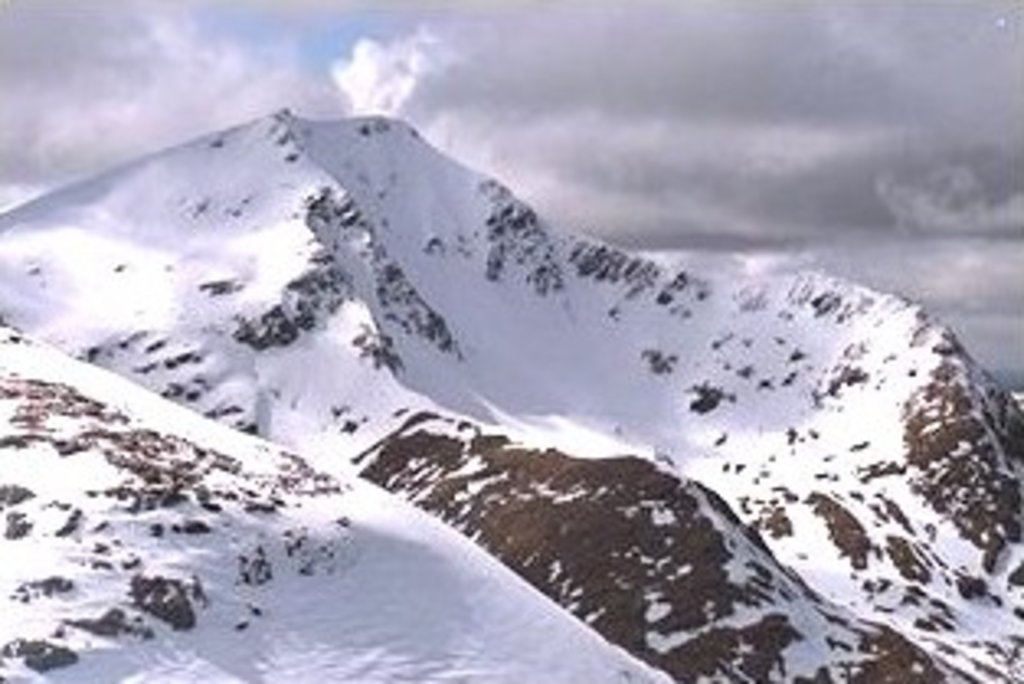 Add photo
1 130 m
Elevation
Elevation is the altitude of a place
above sea level.

870 m
Prominence
Peak’s prominence is the least
vertical to be covered to get from the
summit to any other higher terrain.

Ben Lui (Scottish Gaelic: Beinn Laoigh) is a mountain in the southern Highlands of Scotland, at the head of Glen Fyne. It has five well-defined ridges radiating out from the summit. Four corries lie between the ridges; including Coire Gaothaich which lies on the northeast side of the mountain.

Ben Lui is the highest and most famous of a group of four Munros that lie south of Glen Lochy, and about 10 km north of the top end of Loch Lomond. The other three peaks in the group are Beinn a' Chleibh, Ben Oss and Beinn Dubhchraig.

The Ben Lui range of peaks is designated as a National Nature Reserve. The cliffs and rocky outcrops are particularly moist, with lower than normal levels of acidity in the soil. This leads to an unusually lush growth of mountain plants, with saxifrages, mosses and lichens being especially evident.

The simplest and shortest ascent of Ben Lui may be made from Glen Lochy, near the point where the burn of Eas Daimh flows into the Lochy. A path leads up through an area of forestry and then onto the northwest ridge, reaching the summit in just over 3 km. Descent may be varied by visiting Beinn a’ Chleibh, which lies 2 km to the south west.

An approach from the east allows for appreciation of the mountain's most celebrated feature, the rocky circular bowl of Coire Gaothaich. One may either start from Tyndrum Lower station or Dalrigh in Strath Fillan; tracks from both starting points merge, and follow Glen Cononish to the foot of Ben Lui. From here the route follows the northern ridge of the mountain, Stob Garbh, to the summit, the distance being about 9 km. This route is particularly treacherous in winter, even as late as April, when the final third of the ascent is often extremely icy. Furthermore, it can be extremely difficult to navigate through the crags around the upper rim of the Coire Gaothaich in poor visibility.

By descending via the south east ridge the walker may elect to include Ben Oss (and possibly Beinn Dubhcraig) in the route before returning to the start. If transport can be arranged a reasonably fit hillwalker can traverse all four Munros of the Ben Lui group in a day.

Ben Lui stands at the Head of Glen Fyne.

A lochan on the slopes of Ben Lui has been identified as the source of Scotland's longest river, the Tay.