Alberta
8
Mountains with prominence of 1 ⁠500 ⁠m / 4 ⁠921 ⁠ft or more.
Highpoint

Alberta, Canada’s fourth-largest province, encompasses an area of over 250,000 square miles (647, 497 km). Bounded by British Columbia to the west and Saskatchewan to the east, Alberta is one of only two landlocked provinces and contains some of the most diverse terrain in North America.

The southern quarter of the province encompasses expansive prairie, while the northern half is home to sprawling boreal forest. Along the western edge of the province, outdoor enthusiasts flock to the eastern slopes of the Canadian Rockies which dominate the surrounding landscape. 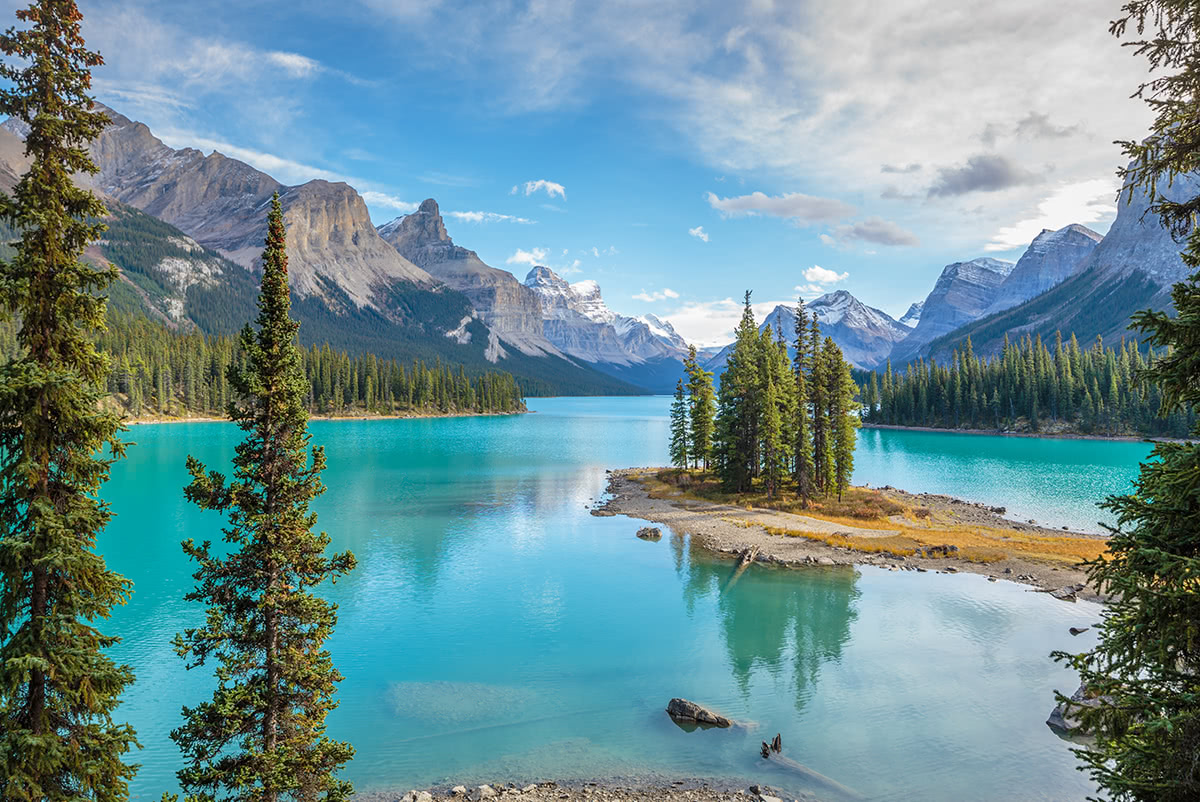 Defined by short, cool summers and snow-packed winters, the Rocky Mountain region is an admired outdoor exploration mecca. Ranging in elevation from 825m to above 3600m at Mount Columbia, the highest point in the province, the Rocky Mountain region contains the most extensive elevation range in Alberta. Interestingly, this natural region is also a critical source of drinking water for Canada’s prairies and is home to an array of endangered wildlife.

Arguably one of the most scenic roadways in the world can be found stretching from Banff National Park to Alberta. As Icefields Parkway, an iconic 232 km stretch of double-lane highway, weaves its way between Lake Louise, a hamlet in Banff National Park, to Jasper, Alberta, a seemingly infinite number of lofty Rocky Mountain peaks dominate the landscape. For most visitors, merely driving through these magnificent mountain peaks is a trip highlight. Postcard-worthy peaks in this region include Pyramid Mountain, Mount Kerkeslin, Sunwapta Peak, Mount Christie, Mount Rundle, Castle Mountain, and Mount Temple. Several of these peaks, like the beloved Mount Edith Cavell, contain incredible glaciers that feed pristine, aqua-blue alpine lakes.

Within just the Rocky Mountain region of Alberta, adventurers can experience Jasper and the Icefields Parkway in the north, Banff, Lake Louise, Kananaskis Country, and Canmore in the South, and Waterton along the U.S. border – Needless to say, there is a something for everyone in Alberta’s Rocky Mountains. 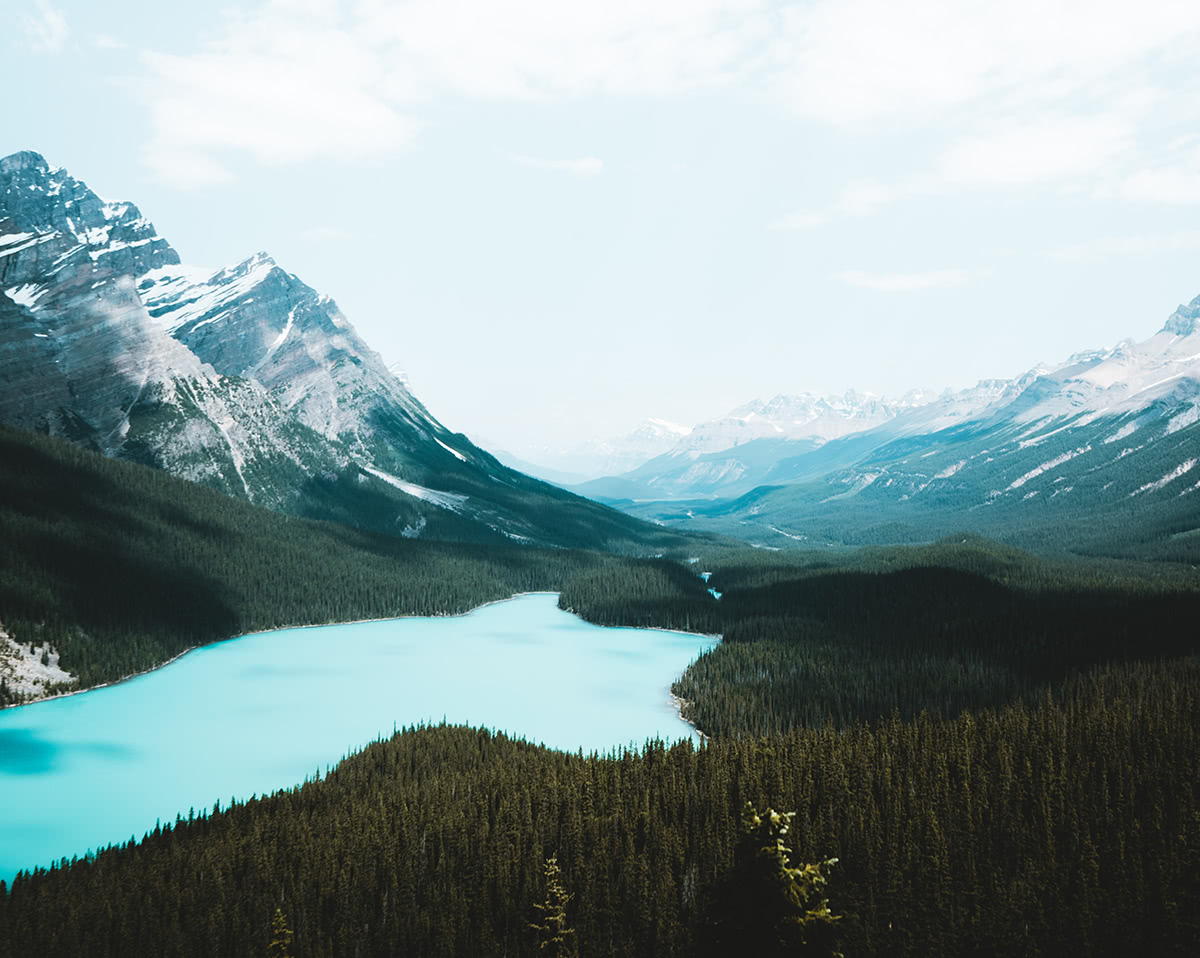 Covering 2,564 miles of the Canadian Rocky Mountains, Banff National Park is Canada’s first National Park and one of the most impressive natural areas in Canada. Decorated by jagged Rocky Mountain peaks, turquoise glacial lakes, and an abundance of wildlife, Banff is the ideal place to take in serene mountain scenery. Banff is part of the Canadian Rocky Mountain Parks UNESCO World Heritage Site and offers over 1,000 miles of diverse mountain hiking trails available to explore the region. These are just a few of the most popular trails in Banff National Park:

Johnston Canyon – One of the most spectacular natural features in Banff National Park, Johnston Canyon takes hikers along a narrow catwalk that hugs the depths of a deep canyon. Accessible in both summer and winter, a hike through Johnston Canyon features several waterfalls, one-of-a-kind canyon vistas, and incredible limestone rock formations.

Plain of Six Glaciers - The trail to the Plain of Six Glaciers Tea House offers hikers an opportunity to get up close and personal with Mount Lefroy, Mount Victoria, and the Victoria Glacier. The 9.4-mile trail takes hikers beyond the Chateau Lake Louise, through an incredible glacial valley to a tiny tea house that was built in 1927. During summer months, the hikers will appreciate a quick stop at the teahouse, which still serves tea and scones. 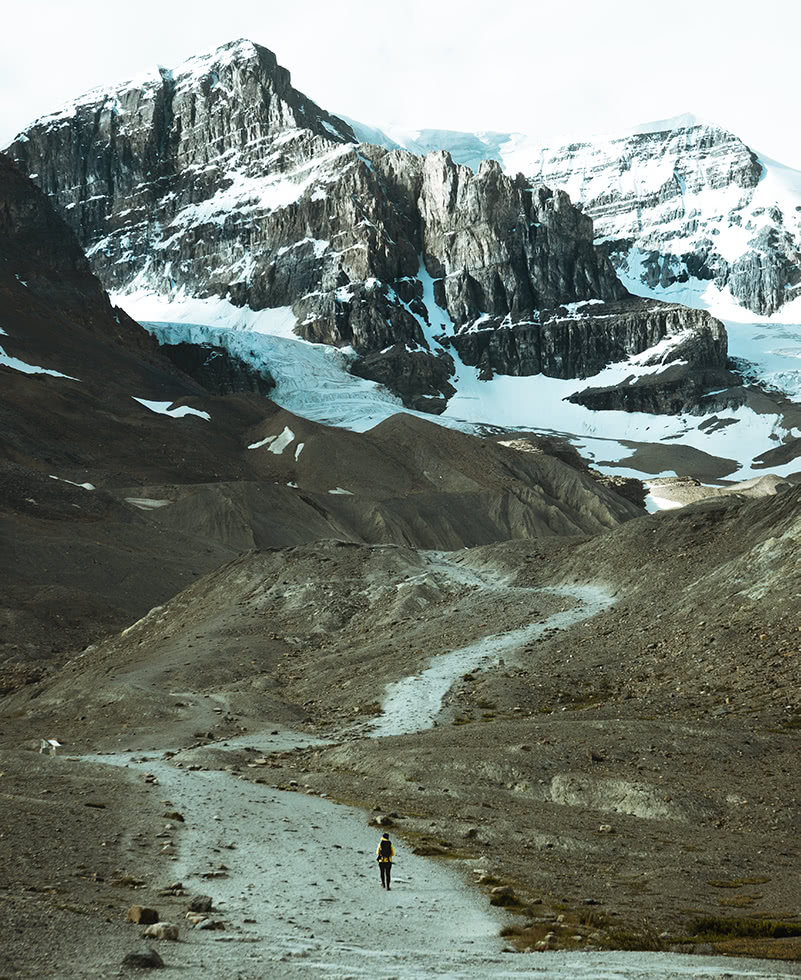 Moraine Lake - Arguably the most popular alpine lake in Banff, Moraine Lake is an incredibly vivid turquoise alpine lake that is set in the Valley of Ten Peaks. There are several hikes around the lake that vary in difficulty. The Rockpile Trail is an easy path that travels along the back of the lake to the top of a natural dam. This vista is known as the “Twenty Dollar View,” because it was the image found on the back the Canadian twenty-dollar bill from 1969 to 1979. Other trails include the Lakeshore Trail, Larch Valley, and Sentinel Pass; All of which offer unique vantage points of Moraine Lake. 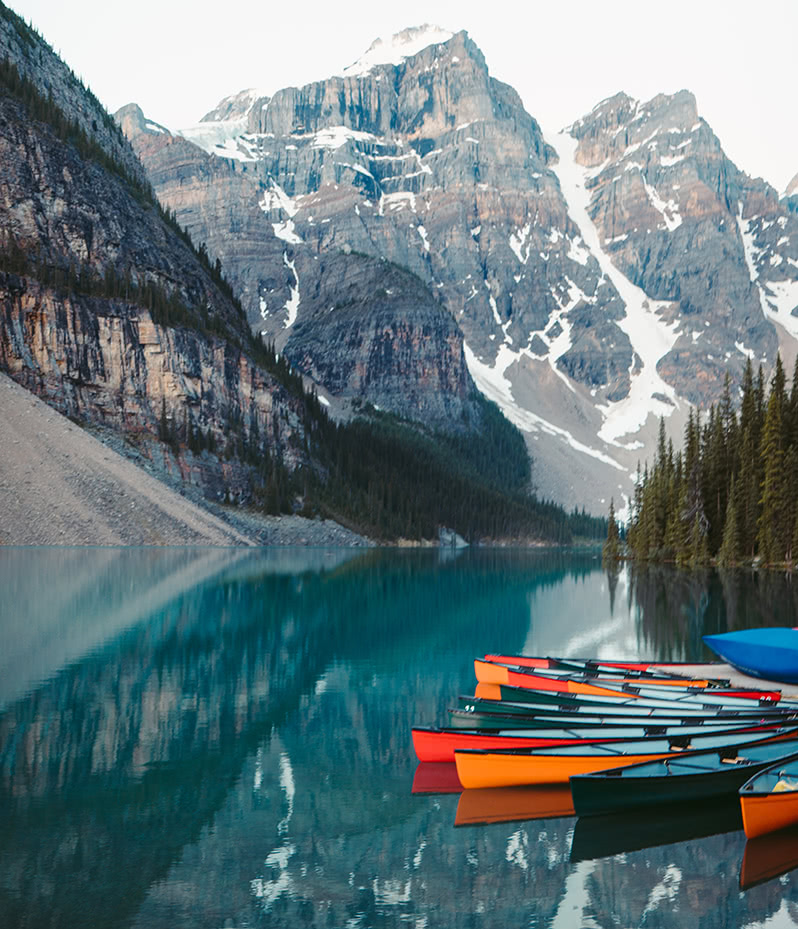 Wilcox Pass - Considered by many to be one of the best day hikes in Jasper National Park, Wilcox Pass offers a little bit of everything – glaciers, mountain views, wildlife, and cascading waterfalls. This 5.8-mile out and back trail offers unparalleled views of Mount Athabasca, Snow Dome, Mount Kitchener, and Athabasca Glacier.

Sunwapta Falls - Located along the Icefields Parkway, Sunwapta Falls consists of upper and lower waterfalls that are fed by the Athabasca Glacier. The upper falls can be easily appreciated from a viewpoint near the parking lot. However, a short trip down trail takes hikers through a lodgepole pine forest to a view of the lower falls.

Skyline Trail - Backpacking the Skyline Trail is considered one of the most stunning multi-day hikes in the Canadian Rockies. Spanning 44 km (27 miles), the trail takes hikers through three major alpine passes along the Maligne Range. There are two trails for the Skyline Trail, from the shore of Maligne Lake and from Signal Mountain. This hike is said to be the best way to experience the Rockies and takes 2-4 days to complete.

Waterton is a quiet, uncrowded National Park that sits on the border of Glacier National Park in Montana. Together, Glacier and Waterton make up the Waterton-Glacier International Peace Park, the first of its kind in the world. Although it’s much smaller than both Banff and Jasper, Waterton offers ample hiking trails and alpine peaks to explore. Just a few Waterton highlights include canoeing on Cameron Lake, cycling the Kootenai Brown Trail, or taking an easy trek to Blakiston Falls.

At 4,537 feet of elevation, Banff is the highest town in Canada. A quintessential Rocky Mountain resort town, Banff is nestled within Banff National Park and is the ideal basecamp for outdoor recreation. The Rockies can be admired directly from town, with Mount Rundle, Sulphur Mountain, Mount Norquay, and Cascade Mountain dominating the skyline. The lively streets of downtown are dotted with restaurants, shopping, museums, and mountain-town charm. Nicknamed the “Castle in the Rockies,” the world-famous, historic Fairmont Banff Springs Hotel, offers year-round resort amenities and unparalleled skiing opportunities. However, there are plenty of other popular resorts and other accommodations in and around the town of Banff. Not to mention, Banff is home to three world-class ski resorts – Banff Sunshine, Lake Louise, and Norquay, which cumulatively boast over 8,000 acres of accessible terrain. 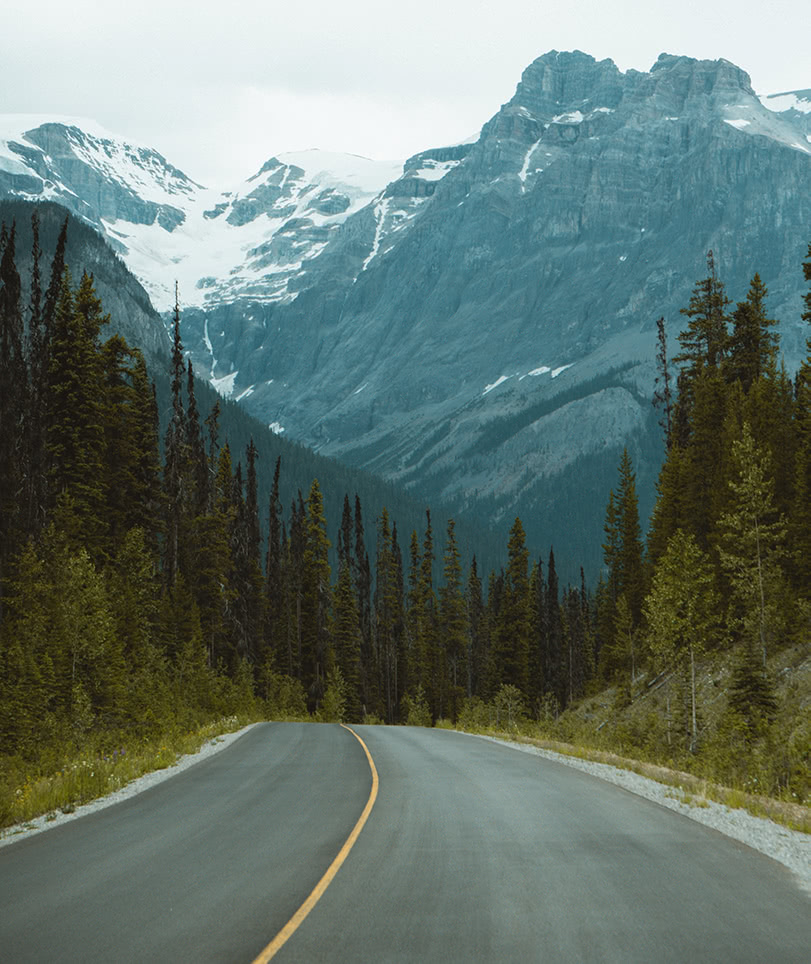 Nicknamed the “Gentle Giant of the Rockies,” Jasper is a tranquil mountain town packed full of adventure. The world’s largest dark sky preserve, Jasper is the perfect place for stargazing and, if you’re lucky, experiencing the aurora borealis. Jasper serves as the ideal place to explore the alpine terrain in Jasper National Park. Marmot Basin, a ski resort just 20 minutes from town, offers a 3,000-foot vertical, 86 trails, and over 1,600 skiable acres. In addition to year-round outdoor recreation opportunities, Jasper offers a variety of accommodations including notable resorts like Pyramid Lake Resort and Fairmont Jasper Park Lodge.

Located near the southeast boundary of Banff National Park in the Bow Valley, Canmore offers visitors incredible scenery, wildlife, and an endless amount of outdoor recreation opportunities. Canmore sits at the base of the iconic Three Sisters Mountain, a trio of peaks known individually as Big Sister (Faith), Middle Sister (Hope) and Little Sister (Charity). The towan is often overlooked by visitors traveling to nearby Banff. However, Canmore offers more tranquility than neighboring towns and has an equal amount of adventure potential. Canmore sits at the edge of Kananaskis Country and provides easy access to major peaks and trails like Ha Ling Peak, Read’s Tower, Sarrail Ridge, Mount Yamnuska, and Mount Lady Macdonald. Although it doesn’t boast as many resorts as nearby Banff, Canmore offers reputable accommodations like Stoneridge Mountain Resort.