Known as ‘the province of 100,000 lakes,’ Saskatchewan is a landlocked prairie and boreal province that encompasses roughly 251,700 square miles of Canada. The province is bordered by Alberta, the Northwest Territories, Manitoba, Nunavut, and the U.S. states of Montana and North Dakota. However, it also has the unique distinction of being the only Canadian province with no natural borders.

Residents of Saskatchewan live mostly in the southern prairie region, while the northern boreal region is largely forested and far less populated. 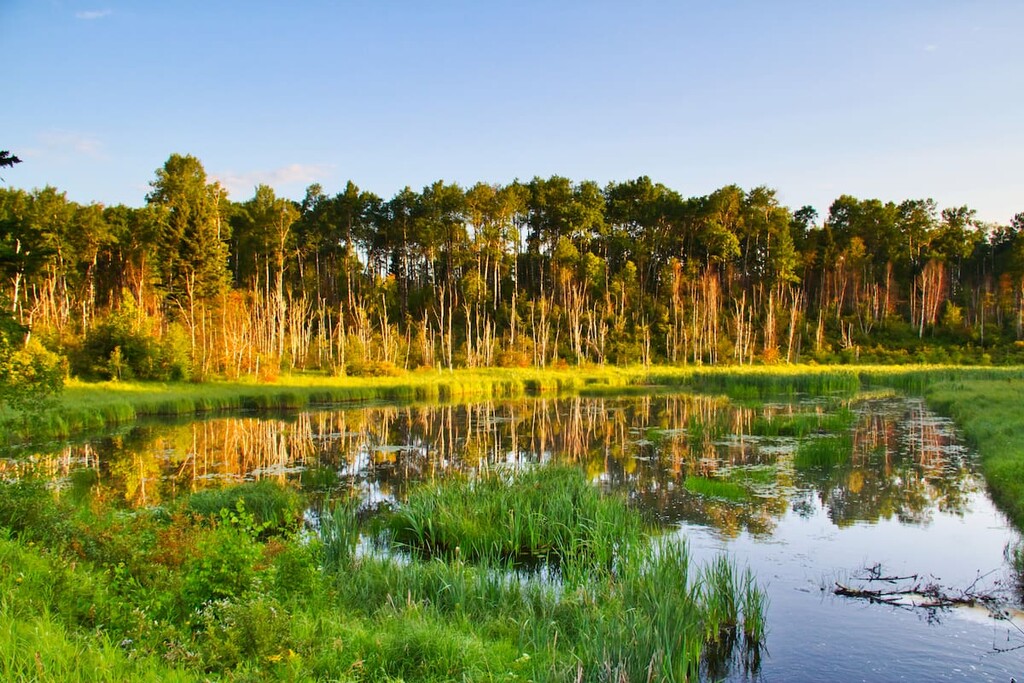 Saskatchewan has been populated by various indigenous peoples of North America, including members of the Sarcee, Niitsitapi, Atsina, Cree, Saulteaux, Assiniboine (Nakoda), Lakota and Sioux. The Plains Cree, prairie buffalo hunters, were southern Saskatchewan’s dominant group while the Dene, Algonquin, and Woodland Cree inhabited the northern part of the province above the tree line. Tribes in the north were heavily dependent on caribou and moose, while those in the south relied on buffalo.

In 1690, Henry Kelsey, an English fur trader and explorer, became the first documented European to reach Saskatchewan. Kelsey traveled up the Saskatchewan River in hopes of trading fur with local indigenous peoples. In 1774, the first permanent European settlement, the Cumberland House, was constructed. Saskatchewan’s First Nations supplied furs and offered survival advice to American and European traders in exchange for goods.

The province remained sparsely populated until the Canada Pacific Railway was constructed in the 1880s. The railway made it far easier to travel throughout the province and brought new settlers to the region.

Saskatchewan became a province in 1905 and by the 1920s it was the country’s third most populous province. Unfortunately, despite becoming Canada’s first social-democratic government in 1944, Saskatchewan would experience a series of boom-and-bust periods throughout the 20th century. While the province saw significant prosperity in wheat production during WW1, the Great Depression and a prolonged drought quickly weakened the region’s wheat wealth.

Nevertheless, Saskatchewan remains one of the largest wheat producers in Canada. The province also is a leader in growth of canola, rye, oats, barley, flax, and forage crops.

Saskatchewan encompasses two major natural regions: The Boreal Forest in the north and the Prairies in the south. A wide, horizontal transition zone of aspen parkland separates the two regions.

Northern Saskatchewan is part of the Canadian Shield and is home to more than 80 million acres of forest. Dazzling lakes, cascading river rapids, beautiful canyons, and sandy cliffs can be found throughout the northern reaches of the province. Northern Saskatchewan is also home to one of the largest active sand dunes in the world, the Athabasca Sand Dunes. The Great Sand Hills, a spectacular sand dune anomaly surrounded by prairie, also covers 120 square miles of southern Saskatchewan.

Southern Saskatchewan, or the “grain belt,” is characterized by mostly flat and gently rolling hills and valleys. Ironically, Saskatchewan’s highest point, the Cypress Hills, is located in the southern region, while its lowest point, Lake Athabasca, is located in the north. Tucked in the southwestern corner of the province, on the Alberta border, the Cypress Hills are considered the highest point between the Rocky Mountains and Canada’s Maritime provinces.

Established in 1981, Grasslands National park encompasses a 220 square mile expanse of mixed prairie grasslands and protects one of the nation’s few remaining areas of undisturbed dry mixed grass/shortgrass prairie grassland. The park is also home to endangered species like the burrowing owl, pronghorn antelope and Canada’s only colonies of black-tailed prairie dogs. Highlights of the park include the Frenchman River Valley, home to a herd of over 300 plains bison, the Seventy Mile Butte, and the badlands of Rock Creek.

Established in 1927, Prince Albert National Park encompasses 1,496 square miles of central Saskatchewan. Until the establishment of Grasslands National Park, Prince Albert was the only provincial park in Saskatchewan. The park spans the thin transition zone between the northern boreal forest and the southern aspen parkland. Prince Albert is best-known for its incredible bison herd that roams freely along the park’s southwestern border. However, there are also plenty of opportunities to hike, camp, and explore the park’s many lakes and backcountry trails.

Saskatchewan’s largest city, Saskatoon is a vibrant city nestled along the southern Saskatchewan River. Saskatoon serves as both a cultural and economic hub of central Saskatchewan. Tourist attractions include ‘Boomtown 1910,’ Wanuskewin Heritage Park, the Ukrainian Museum of Canada, and the Western Development Museum. Saskatoon is located along the Trans-Canada Yellowhead Highway and offers plenty of lodging and restaurant options to accommodate travelers.

Saskatchewan’s third-largest city, Prince Albert, lies at the center of the province on the banks of the North Saskatchewan River. Known as the “Gateway to the North,” Prince Albert is a bustling resort town that offers unparalleled access to scenic northern Saskatchewan. Prince Albert National Park lies just 32 miles north of the city and is packed with beautiful lakes, spruce bogs, and aspen-dotted uplands.