The Beehive Natural Area is a protected, highly biodiverse region that encompasses about 68 square kilometers (26 sq. mi) of land in southwest Alberta, Canada, to the southwest of Calgary along the province’s border with British Columbia. It was created in 1987 to preserve its diverse habitats from human development. There are 3 named mountains in the area, of which Mount Lyall is the tallest at 2951m (9,682ft). 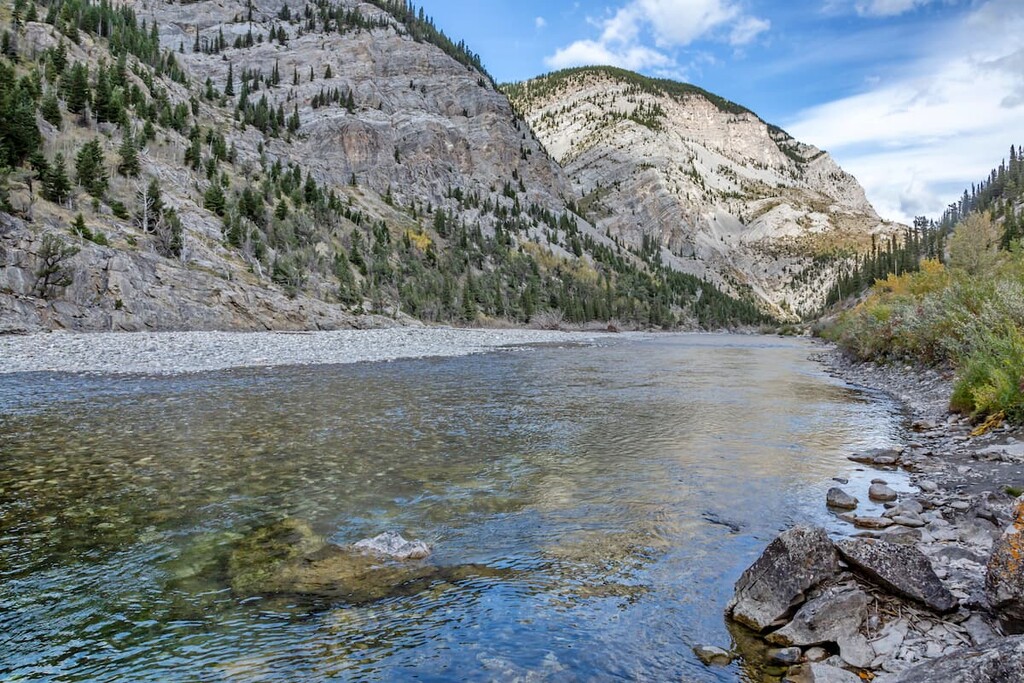 Located at the southern end of Kananaskis Country in the southwestern part of the Canadian province of Alberta, Beehive Natural Area is a remote protected region with only a handful of smaller towns located within a 100 km (60 mi radius of its borders).

The park is accessible from Highway 40, by turning onto Oldman River Road. The Oldman River runs along most of the park’s eastern border, creating a natural barrier. Meanwhile, the Continental Divide and the border of British Columbia are located on the western edge of the park.

The mountains in Beehive Natural Area started forming about 75 million years ago along with the rest of the Rocky Mountains. Over a period of about 30 million years, layers of marine sediment, sandstone, and shale were pushed into the air to form the Rocky Mountains. The High Rock Range is located along the Lewis Thrust Fault where the upper layers of Mississippian limestone and dolomite slid over younger, Cretaceous sandstone and shale.

During and after their formation, the mountains were subject to erosive forces that formed the topography that we see today. Glaciation during the Pleistocene epoch was the primary erosive force and over the last 3 million years, Beehive Mountain was subject to three mountain glacial advances which created its distinct shape.

The three peaks found within the natural area include Mount Lyall, The Elevators, and Beehive Mountain.

The primary ecological regions in Beehive Natural Area are alpine and subalpine. The alpine area consists of the rocks and stunted plants above the treeline, and the subalpine consists of the forested slopes and into the valleys.

Though there are only two ecological regions in Beehive Natural Area, there are many diverse habitats, including alpine tundra, rocky cliffs and ridges, extensive old-growth spruce and fir forests, lodgepole pine forests, grasslands, alluvial plains of the Oldman River, and moist meadows.

The diverse habitats of Beehive Natural Area are critical habitat for many species that are rare in Canada and sensitive to environmental impact. Rare animals, such as Canada lynx, peregrine falcons, golden eagles, and pileated woodpeckers are found in the park. The area also contains prime grizzly habitat, important summer range for elk, and lambing sites for bighorn sheep.

There are important habitats of old growth forests of spruce and fir in the Beehive Natural Area that are well over 1,000 years old. Within these forests, there are many individual trees that are 300 years old.

It is estimated that humans began to inhabit the mountains and plains around Beehive Natural Area about 10,000 years ago. As the glaciers melted out of the valleys and the vegetation and animals started to inhabit the area, Indigenous peoples likely migrated northward into the area.

The area is traditional territory of the Blackfoot Confederacy, which is formed from the four nations of the Kainai, Siksika, Amskapi Piikani, and the Aputosi Pii’kani.

It is speculated that the Blackfoot started moving west into the plains and prairies of western Canada around the year 1200, from the northeastern forests along the Atlantic Coast. By the eighteenth century, with the introduction of horses to their people, the Blackfoot Confederacy controlled a vast territory reaching over 400 km (240 mi) east from the Rocky Mountains.

Before the Beehive Natural Area was created in 1987, oil and gas exploration in the area led to the construction of a well site and an access road in the 1950s. Additionally, ranchers were permitted to pasture their cattle in the area.

The area was declared a protected area in 1987 by the Government of Alberta in order to preserve the ecological diversity and natural areas for recreational purposes. However, there is a local movement to reclassify the area as a Wildland Provincial Park in order to protect it further from any future industrial activity.

The park might be small, but Beehive Natural Area contains diverse natural landscapes that are well worth a visit, including its river valley and its lofty peaks. Hiking, hunting, backpacking, bird and wildlife viewing, and fishing are all popular activities in the area.

The following places are a few of the primary attractions in the area:

The Oldman River borders the Beehive Natural Area to the east and is home to many trout for the anglers among us. Boasting incredible mountain views and lush forests, the river offers both tranquility and peace.

There are waterfalls along the river to check out, and the river itself is popular for fly-fishing as there are many access points from the road to the river for visitors to use.

The Great Divide Trail is a 1,130 km (720 mi) long collection of trails that run along the Continental Divide from Kakwa Provincial Park in British Columbia to the Canada-US border in Waterton Lakes National Park. If looking at a map of Canada, the trail follows the Continental Divide, which is also the irregular shaped line that forms the southern part of the border between Alberta and British Columbia.

The trail crosses the continental divide 33 times and runs through Beehive Natural Area. The trail passes along the eastern slopes of Mount Lyall and Beehive Mountain before leaving the park towards Coleman Alberta. So, it’s a great trek to check out for the more adventurous among us.

Mount Lyall and Beehive Mountain both have hikes that lead to the summit. There is significant elevation gain along the trail, as well as some difficult sections to navigate; however, both mountain trails are considered hikes, not scrambles. These hikes take you up to the continental divide giving you views of the Livingstone Range to the east and British Columbia and the Quinn Range to the west.

There is a trail that connects the two peaks that allow for the two peaks to be completed as one hike, in a loop. The total distance is approximately 25 km (15 mi), so it can be accomplished in a day for the more ambitious among us.

Or, there is also the option to random camp along your route and split up the hike into two or more days. There are a couple of tarns to camp near that are peaceful and have great scenery, so they’re well worth checking out.

Beehive Natural Area is in a remote area in southern Alberta, so the nearest cities are over 100 km (60 mi) away. However, there are some towns, such as Coleman, Longview, and Pincher Creek that offer food, supplies, and minor accommodation for travelers. The following are the more popular tourist centers near Beehive Natural Area.

Located in the foothills of the Rocky Mountains, Calgary is the largest city in Alberta, and is often seen as a gateway to the Rocky Mountains. Many tourists come through Calgary on their way to Canmore, Banff, and most locations in the southern Canadian Rockies.

While Calgary is a great launch pad for mountain adventures, there are certainly worthwhile local events and activities to check out. During the summer there are many outdoor events ranging from street festivals to The Nationals at Spruce Meadows, and the Calgary Stampede.

There are many productions to attend year round in Calgary, such as those from the Calgary Philharmonic Orchestra, Calgary Opera, and the many theater companies. There is also Shakespeare by the Bow, which is a free, outdoor Shakespeare production featuring local actors.

Calgary has a lot to offer; however, its proximity to the Canadian Rockies is appreciated and a highlight for many residents.

Canmore is located at the north end ofKananaskis Country, while Beehive Natural Area at the southern point. The drive down Highway 40 is incredibly scenic and will take you through the Highwood Pass, which is the highest paved pass in Canada.

Originally settled as a coal mining settlement, Canmore has become a hotspot for mountain adventures and resorts. The town lies along the Bow River valley and up onto the slopes of the surrounding mountains. The prominent peaks of the Three Sisters and Ha Ling look down upon the town and there are many mountain hikes starting from the edge of town.

While Canmore is busiest in the winter, catering to the skiers on the nearby mountains, there are plenty of activities the rest of the year too. Hiking, mountain and road biking, fishing, kayaking, and canoeing are popular summer activities. One popular hike is up to Chester Lake, where fishing is good; however, this hike is even better as a snowshoe trek during the winter. Canmore is a vibrant town in the Rockies that offers amazing views of the mountains, wonderful accommodations, and endless opportunities for adventure.

Kananaskis Village is located in the Evan-Thomas Provincial Recreation Area in the heart of Kananaskis Country, Alberta. Situated 26 km (16 mi) south of Highway 1 on Highway 40, Kananaskis Village is one of the closest tourist destinations to the Beehive Natural Area. Accommodations in the community range from modest hostels to the more luxurious Kananaskis Lodge.

There are stores to buy supplies, food, and rent equipment such as kayaks, canoes, and mountain bikes. There is also the beautiful Kananaskis Country Golf Course, trails starting just outside your hotel, and the Nakiska Ski Area just down the road.

While there are incredible hikes starting from the village, such hikes to Ribbon Falls and Troll Falls, Kananaskis Village is a great place to make your “base camp” to explore the many nearby provincial parks and their vast mountain terrain, in any season.

The area of Crowsnest Pass was settled in the nineteenth century as coal was discovered and mined from the region. A significant regional attraction is the Frank Slide Interpretive Centre, where you can see and hear first hand what happened the night that Turtle Mountain fell and covered the town of Frank. 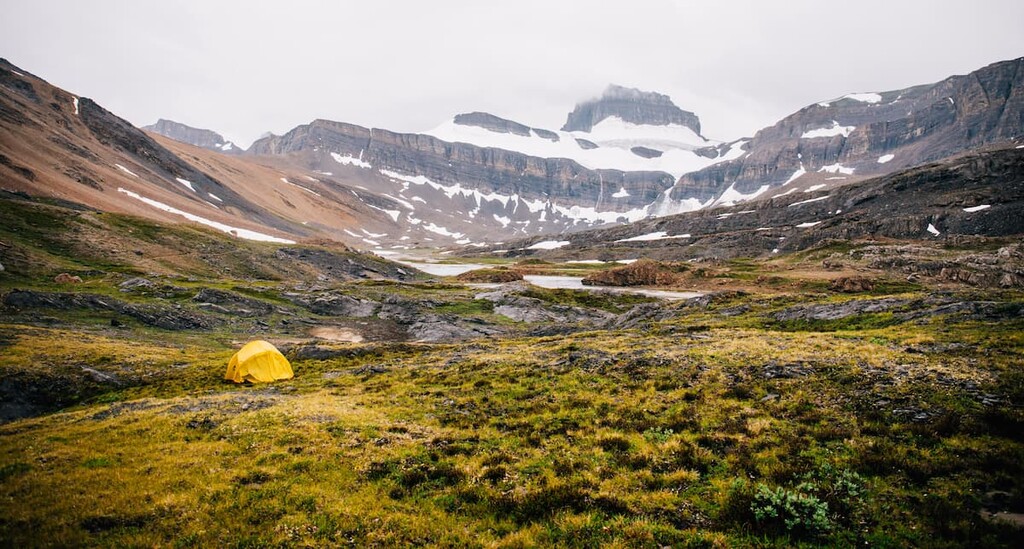 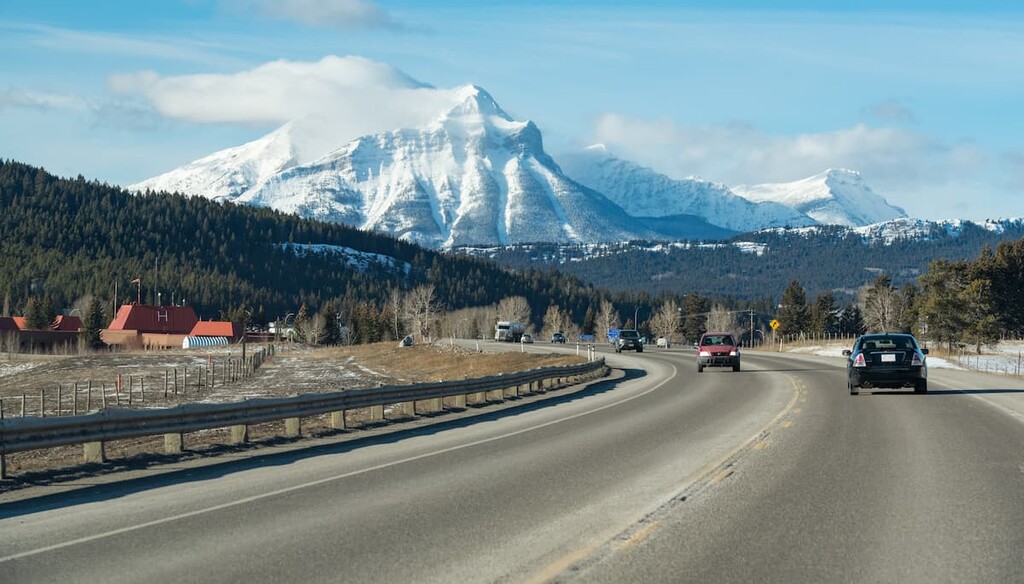 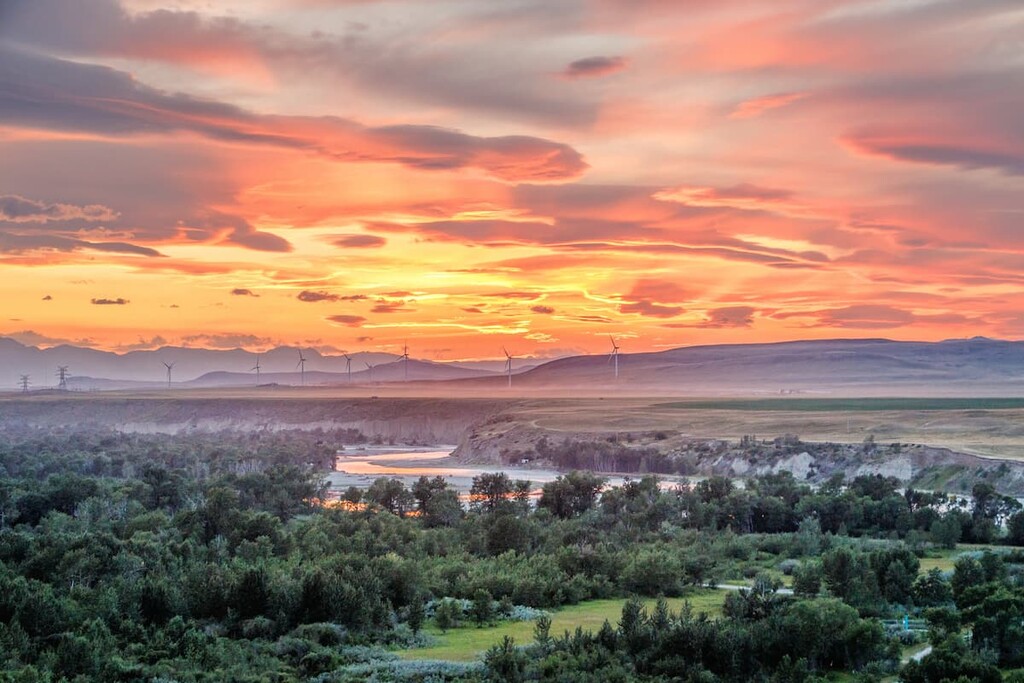 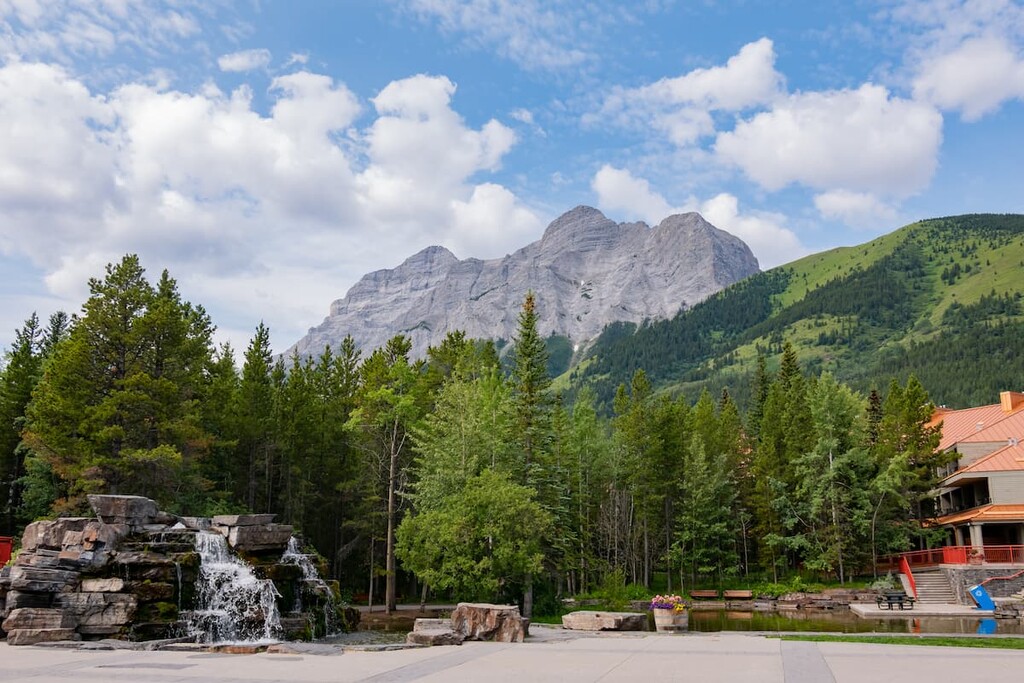 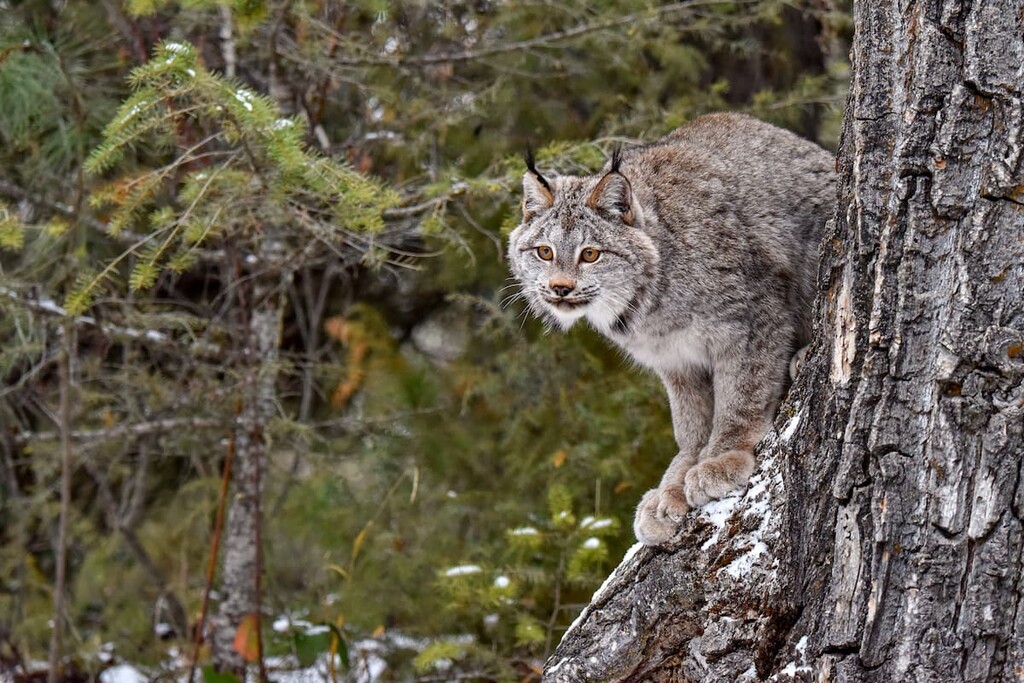