Evan-Thomas Provincial Recreation Area (Evan-Thomas PRA) is in the heart of Kananaskis Country, in the southwestern part of the province of Alberta, Canada.

The area is known for the Nakiska Ski Hill, which hosted ski events for the 1988 Calgary Winter Olympics and Kananaskis Village. 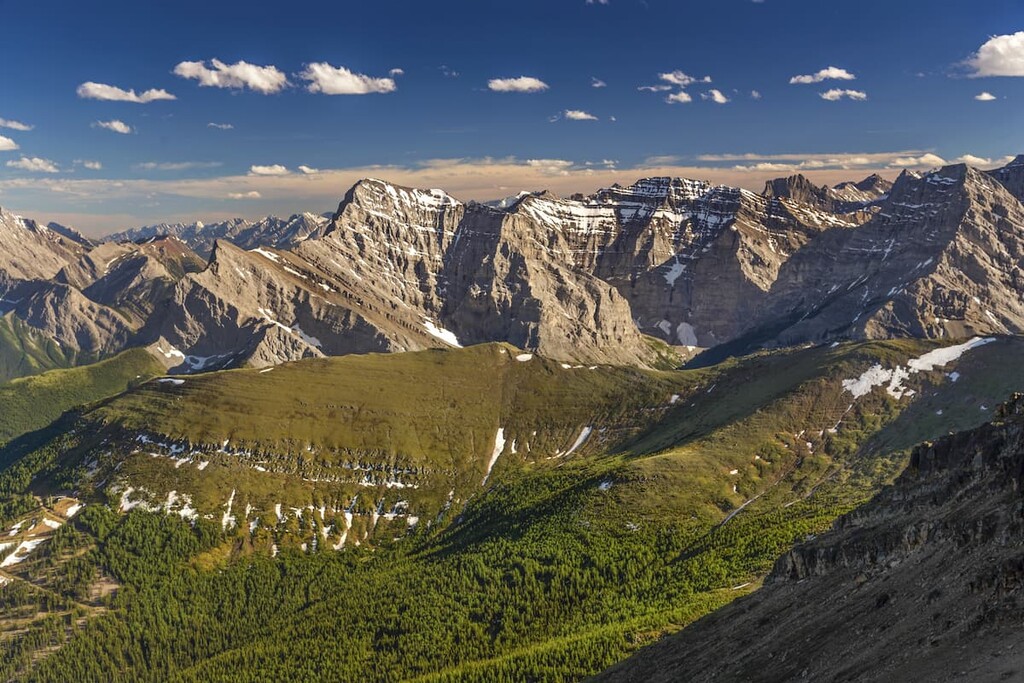 Established in 1982 and expanded in 1986, Evan-Thomas PRA covers 4400 hectares (10872 acres) of land and it is the largest provincial recreation area in Alberta. The only significant peak found within the area is Olympic Summit (2476m/8123ft).

Evan-Thomas PRA is located south on Highway 40, in Kananaskis Country. The area covers part of the Kananaskis River, an important valley habitat, as well as the slopes of Mount Allan and Mount Kidd.

Covering only 4400 hectares (10872 acres), Evan-Thomas PRA was established to create a management zone for the amenities in Kananaskis Village area and Nakiska Ski Area.

The boundaries of the park wrap around the Nakiska Ski Area, which is a horseshoe-shaped slope that’s comprised of Olympic Summit, Mount Allan and Mount Collembola. The area also includes the Kananaskis Village area in the valley and the Mount Kidd RV park, in the shadow of Mount Kidd.

The main access to the park is Highway 1, turning south onto Highway 40. However, accessing the area from Highway 68, is worth considering at least once, to see some of the incredible views in the area.

Evan-Thomas PRA is located within the Kananaskis Range, which follow the typical formation patterns found in the Rocky Mountains.

A sedimentary layer was pushed eastward over younger rocks 80 to 35 million years ago. The sedimentary layer overthrust created the mountains that we see today, complete with interesting folds and strata layers.

Glaciation also shaped the Kananaskis Valley and the morainal terraces found along both sides of the valley just above the floodplain are the most prominent features of the glacier activity. The fanned rocks and debris along the river floodplains are prominent alluvial features within the Evan-Thomas PRA.

Coal was discovered in the Ribbon Creek area in 1903 by George Dawson. In 1947, a mine was opened on Mount Allan, but it closed in 1952 due to declining markets. In 1976, the government of Alberta announced a policy to prohibit coal mining in the area.

This small area of land contains all three of the Canadian Rocky Mountain natural regions: alpine, subalpine, and montane. The climate is characterized by short, cool summers and long, cold winters. The peaks receive the highest amounts of precipitation; however, the valley also receives substantial snow and rain.

Located above the tree line, the alpine region has little vegetation and animal presence. Consisting primarily of sedges and lichen, with few other plants, the peaks are quite barren. The animals inhabiting the alpine areas are primarily birds such as the American pipit and the white-tailed ptarmigan, but only during nesting season.

Engelmann spruce and subalpine fir grow in open stands on the mountains. Dense lodgepole pine forests inhabit the lower altitudes. Buffalo-berry, grouseberry, and five-leaved bramble are common undergrowth in the subalpine forests. Stands of dwarf birch and willow are common in moist sites.

The montane region is the rarest of the Rocky Mountain natural regions. It is characterized by a matrix of open meadows and dense forests.

The forests are mainly composed of lodgepole pine and Douglas fir. Spruce crowds around streams and rivers and aspen tends to stand along terraces. The undergrowth of creeping junipers and bearberry will spill out into the meadow. The meadows are dominated by bluebunch wheatgrass, fescue grasses and oat grasses.

It is also possible to encounter rare Harlequin ducks that are known to breed along the Kananaskis River in small numbers. They are a “species of concern” in Alberta.

Human use and habitation of the area began 8,000 years ago. The park is traditional territory to the Tsuu T’ina, Stoney, Ktunaxa Amakis, and Blackfoot/Niisitapi nations.

Numerous cultural sites can be found along the Highway 40 right-of-way and artifacts indicate nearly 7,000 years of continued use of the area. It is suspected that people from as far away as Idaho traveled to the area for summer hunting. Native groups from British Columbia also traversed the ranges to trade with the plains tribes.

Since their arrival in the 1600s, the Stoney peoples have used the area in a variety of ways. Wedge Pond and Mount Kidd have been used as vision quest sites. The southern portion of the area is still used to gather medicinal and ceremonial herbs.

Do note, however, that if you happen to find what you believe is a site of cultural significance, please show respect and remember that it is illegal to remove or disturb any artifacts, stones, or plants within the park.

It’s recommended that you report your find to a conservation officer so they can take appropriate measures to secure the site for future study and preservation.

European influence arrived with James Sinclair and the Palliser Expedition, who mapped and explored all the way to the Pacific Ocean in the 1800s. 1886 saw the start of the Eau Claire Logging Company. 1947 saw the start of a coal mine on Mount Allan. The mine closed in 1952 and the only evidence left is the overgrown Kovach town site and the reclaimed mine on Mount Allan.

It was in the 1980s that this area developed its current infrastructure, in anticipation of the 1988 Calgary Winter Olympics. Construction started on Nakiska in 1985 to host the ski events while 1986 saw the construction of the Kananaskis Lodge in order to provide lodging for the athletes.

The area has since developed several resorts, a hostel, an RV park, an emergency response base, and a golf course. This is the only area in Kananaskis which has allowed for commercial development.

Evan-Thomas PRA has 64 km (40 mi) of official trails for hiking and biking. Groomed cross-country ski trails in the winter, as well as downhill skiing at Nakiska. Some trails lead to the summit of Mount Allan and other trails lead to picturesque waterfalls. Here are some hikes worth exploring:

Hiking to the peak of Mount Allan via the Centennial Ridge is a 17.5 km (11 mi) out and back trail with 1,448 m (4,750ft) of elevation gain. The trail is rated as difficult, as it is steep. This trail is closed from April 1 to June 21 to protect the Rocky Mountain bighorn sheep during birthing season.

It is a fairly straightforward, albeit steep, hike that starts in the Kananaskis Village area and progresses through the trees until you reach the ridge. Once out of the trees and on the ridge you pass Olympic Summit and keep hiking until you get to the top. The peak offers expansive views of Kananaskis Country.

Most of the trail follows Ribbon Creek through the forest. The beginning is quite wide as it is groomed for cross-country skiing during the winter. The trail slowly climbs until you reach Ribbon Falls and a backcountry campground. The trail continues until and will get steep, at which point you’ll find permanent chains to help you scale the cliff in order to reach Ribbon Lake.

Though most of the hike is through forest and trees, there are some incredible vantage points that let you see the mountains to the south. The trail rewards you with the dramatic Ribbon Falls that pour over the cliff and then, the serene Ribbon Lake, if you decide to brave the chains and the cliff.

During the spring thaw, the melting alpine snowpack causes avalanches on the surrounding peaks. It is a wild experience to hear the thundering roar dozens of times a day and throughout the evening. During this time, the trail itself is usually not in any particular avalanche danger.

The Evan-Thomas Trail is a 13 km (8 mi) out and back trail that will lead you up along the Evan-Thomas Creek. This trail is accessible to hikers, bikes, and horses.

It is a moderate subalpine hike that can be done in all seasons, although wintertime is particularly beautiful. It’s a pleasant hike through the woods and along the creek to see waterfalls and some vantage points of Volcano Peak.

With the opportunity to hike past several frozen waterfalls, this hike is a real gem. If you’re fortunate, you may even encounter climbers as they tackle the frozen falls. There are many trails that branch off from the main trail, some of which take you past the waterfalls. You can hike a loop to take them all in and not double up on too much of the trail.

Evan-Thomas PRA is close enough to Calgary to make a daytrip; however, extended exploration of the area is worthwhile. So, you may find it desirable to stay a little closer. Here’s what you need to know:

Nestled in the heart of the Bow Valley, Canmore, like many towns along the mountain railway, started as a coal mining settlement. It is located near the western edge of Banff National Park so it’s a good place to visit if you’re interested in exploring other fun destinations and activities in the region.

The snow-filled months are typically the busiest months in Canmore, as it is a wonderful tourist town for the surrounding ski resorts, such as Sunshine and Lake Louise.

Located 26 km (16 mi) south of Highway 1 on Highway 40, Kananaskis Village is an unincorporated community in Evan-Thomas PRA in the heart of Kananaskis Country. Accommodations range from a modest hostel to the more luxurious Kananaskis Lodge.

In Kananaskis Village, there are stores to buy supplies, food, and rent equipment. The village is also located at the base of the Nakiska Ski Hill and resort, which is a great winter destination.

Kananaskis Village offers hikes beginning right outside your door, such as Ribbon Lake and Troll Falls. It is a starting point for many groomed cross-country ski trails in the winter and it is the closest lodging to much of the backcountry skiing offered further south in Peter Lougheed Provincial Park. 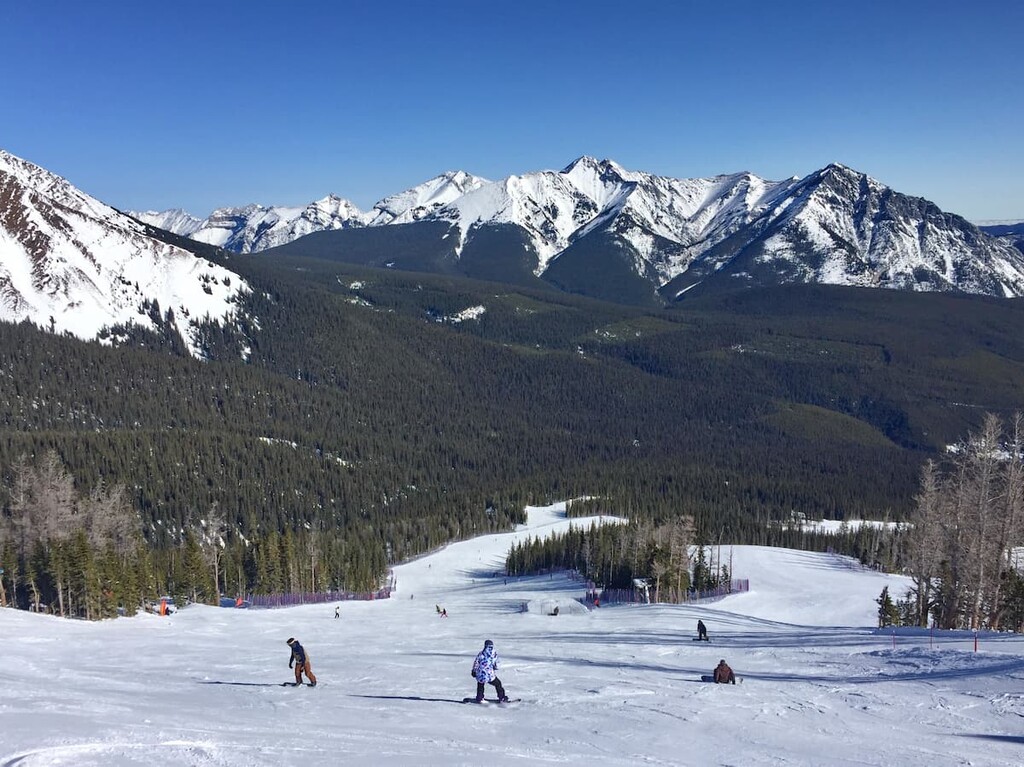 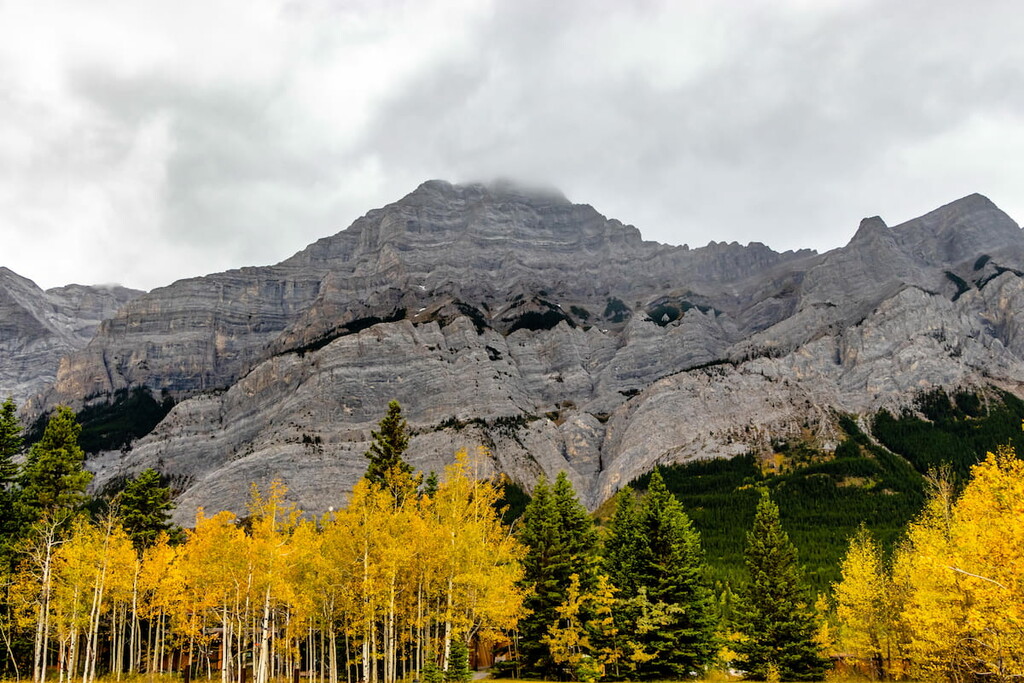