Located in the southwest corner of Alberta, Canada, Waterton Lakes National Park is “where the prairies meet the peaks of the Rocky Mountains.” The park, which protects 124,788 acres of stunning summits, thundering waterfalls, sweeping prairies, and sparkling glacial lakes, shares a border with Glacier National Park in the United States. In 1932, the two parks were united to form the Waterton-Glacier International Peace Park.

The union of the two parks was the first of its kind and was intended to underscore the international boundaries of wilderness and promote the cooperation of preservation. Although the parks are administered separately and have a separate entrance fee, they were jointly designated as an International Dark-Sky Park and declared a World Heritage Site. 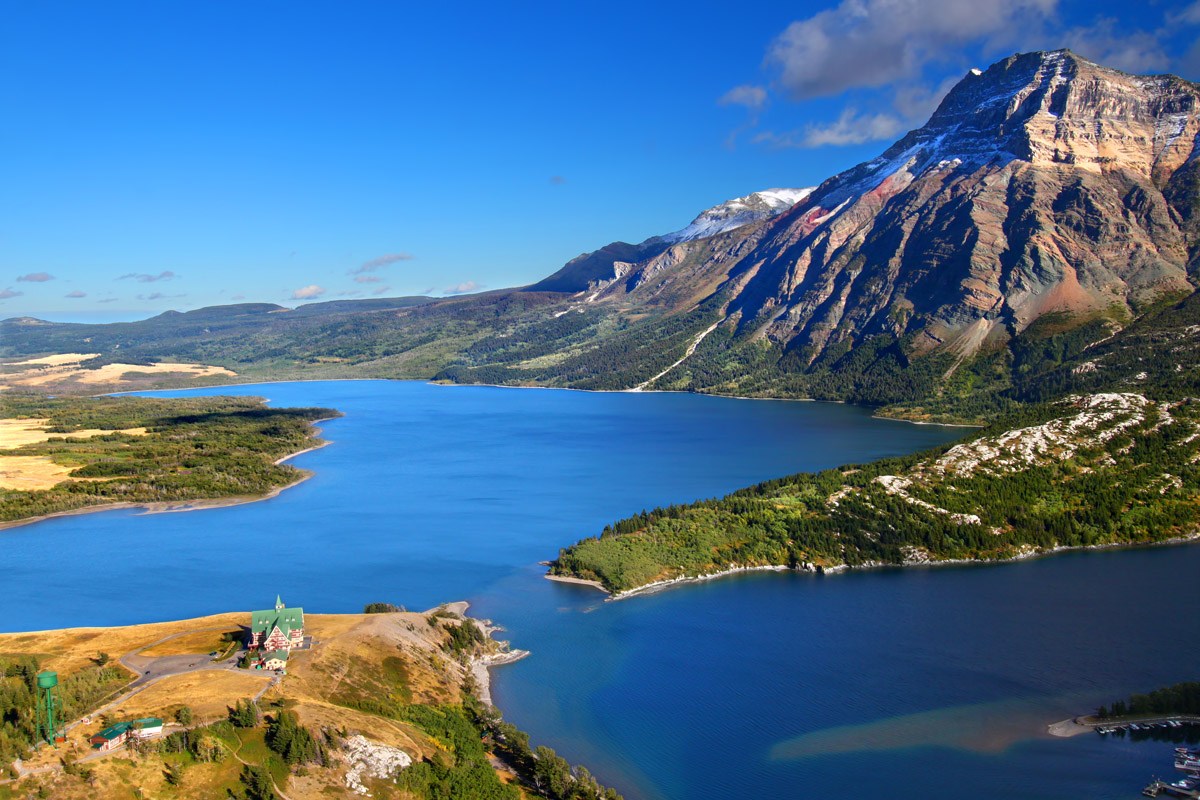 Waterton Lakes National Park, specifically, is Canada’s fourth national park and was formed in 1895. The park’s name originates from the Victorian naturalist and conservationist Charles Waterton, who was an early opponent of pollution and is believed to have established the world’s first modern nature reserve around his estate in 1821. Waterton notoriously fought to keep poisonous chemicals from damaging and polluting a lake near his estate, so it seems fitting that his namesake landmark would be a lake and, subsequently, a national park.

The park varies in elevation from 4,232 feet at the Waterton Park townsite to just over 9,400 feet at the summit of Mount Blakiston, the park’s tallest peak. The Rocky Mountain peaks found in Waterton Lakes were once carved and shaped by ancient glaciers that have since receded. Evidence of the park’s glacial history is evident in the massive cirques and hanging valleys scattered throughout the landscape. Though Waterton only contains 40 named peaks, recognizable alpine summits like Mount Alderson, Mount Crandell, and Mount Boswell make for an impressive backdrop to sparkling lakes and designated footpaths.

The park’s rich and diverse environment also supports a wide variety of plants and animals. Wolverines, bighorn sheep, mule deer, moose, foxes, timber wolves, grizzly bears, lynxes, bobcats, and black bears are just a handful of the park’s known inhabitants. Interestingly, Waterton also contains more plant species than larger Canadian parks like Banff and Jasper and over half of all types of plants found in Alberta are found in the park.

Waterton is a small, but impressive park. Generally, it less frequently visited, which makes it an excellent option for visitors that want to escape the crowds in nearby national parks. The park is also open year-round, though most facilities are closed, so additional research is recommended.

The 10.8-hike to Crypt Lake isn’t the easiest footpath in the park, but it’s arguably one of the most rewarding. The trail climbs 2,300 feet to reach 6,500 feet at the foot of a sparkling turquoise lake surrounded by towering cliffs. The adventure begins via a 15-minute ferry across Upper Waterton Lake. From here, hikers will pass waterfalls, duck through a tunnel, and cling to chains on a narrow ledge in route to the lake. Needless to say, if you’re a thrill-seeker, this trail definitely won’t let you down.

Head to the top of Bear’s Hump to soak in sweeping views of Waterton Valley and surrounding Rocky Mountain summits. This moderate, 1.75-mile footpath climbs to a craggy outcrop on Crandell Mountain and is known as one of the most iconic views in the area. Summer crowds are not uncommon, so if you’re looking for solitude, you’ll want to get an early start.

Wander from creek-side to the top of Lineham Ridge to experience stunning panoramic views of Rowe Valley, Rowe Lakes, Lineham Lakes, Mount Lineham, and Akamina Ridge. This iconic trail is popular, particularly amongst backpackers, and is not for the faint of heart. The trail begins at the Rowe Lakes trailhead and travels for 12 miles, gaining 3,100 feet of elevation.

The trail to Bertha Lakes and Falls is a Waterton classic that features cascading waterfalls, sweeping vistas, and the stunning alpine lake - Bertha Lake. The first part of the trek travels to Lower Bertha Falls and climbs very little elevation, making it an excellent family-friendly option. After just a short walk, hikers can soak in incredible vistas of Upper Waterton Lake, Vimy Peak, and Mount Boswell from a famed viewpoint. After this scenic overlook and Lower Bertha Falls, the trail becomes more strenuous as it climbs a series of switchbacks. However, hikers that continue on will be greeted by Upper Bertha Falls, views of Upper and Middle Waterton Lakes, and eventually, Bertha Lake. The lakeside views from Bertha Lake are some of the best in the park – Mount Richards sits to the left, Mount Alderson sits front and center, and Bertha Peak spans the right side of the lake.

The only commercial facilities available within Waterton Lakes National Park are located at the Waterton Park townsite, a small hamlet that sits at the southwestern terminus of Highway 5. There are several lodges and resorts in or around Waterton, including Aspen Village Inn, Bayshore Inn & Resorts, Bear Mountain Motel, Crandell Mountain Lodge, Northland Lodge, Waterton Glacier Suites, and Waterton Lakes Lodge Resort. There are also a variety of private accommodations that can be reserved in advance. Despite its humble size, Waterton offers visitors a nice variety of cafes, restaurants, bars, shops, and markets. 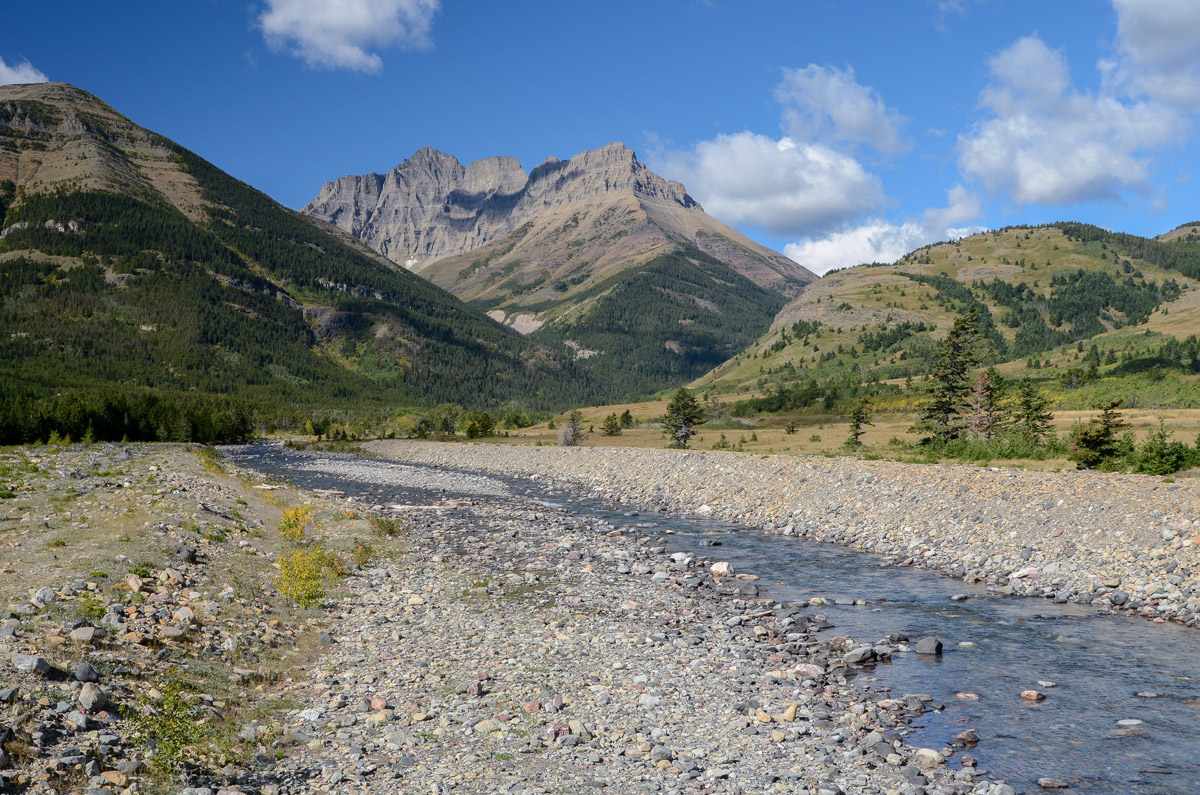 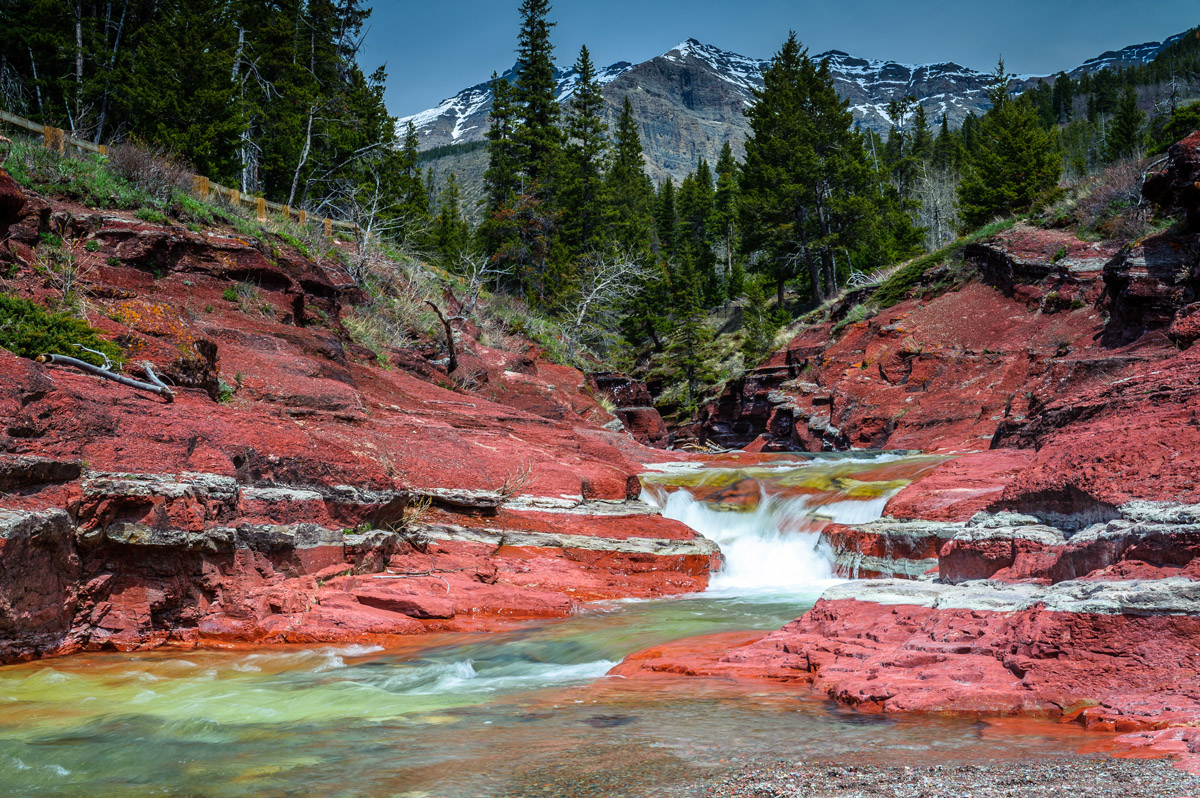 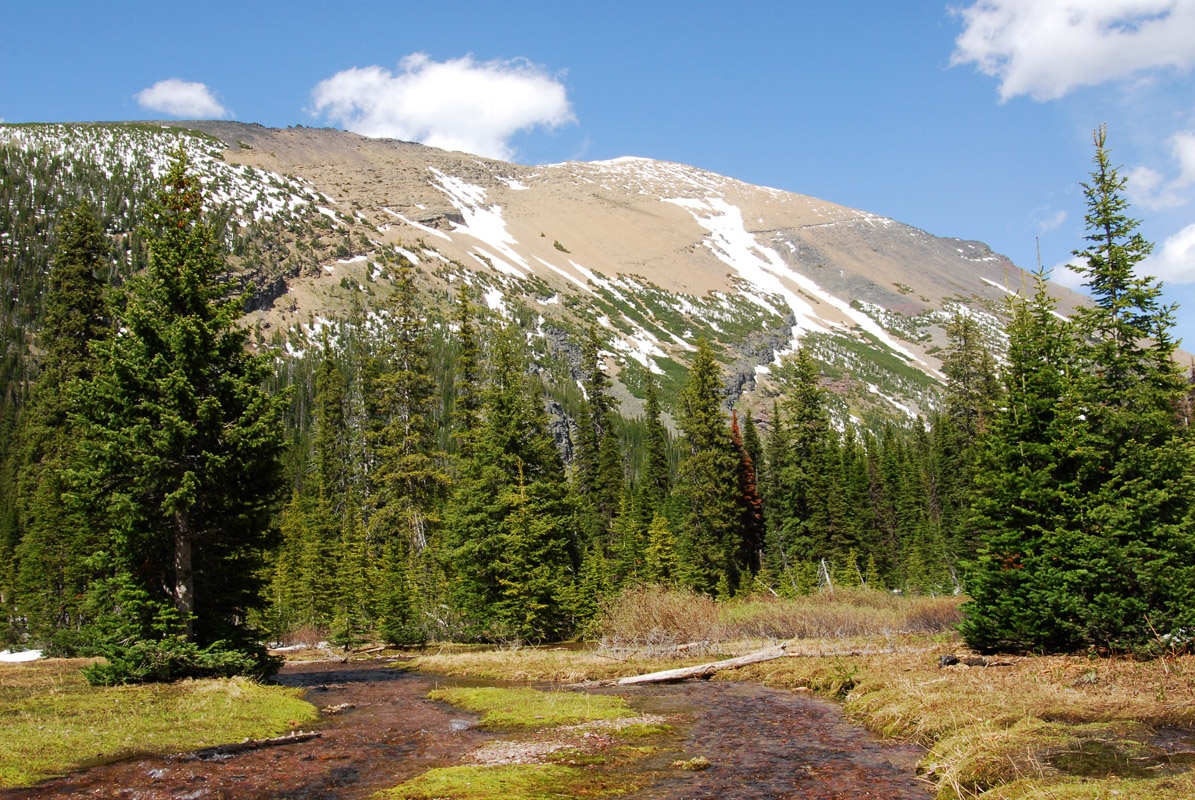 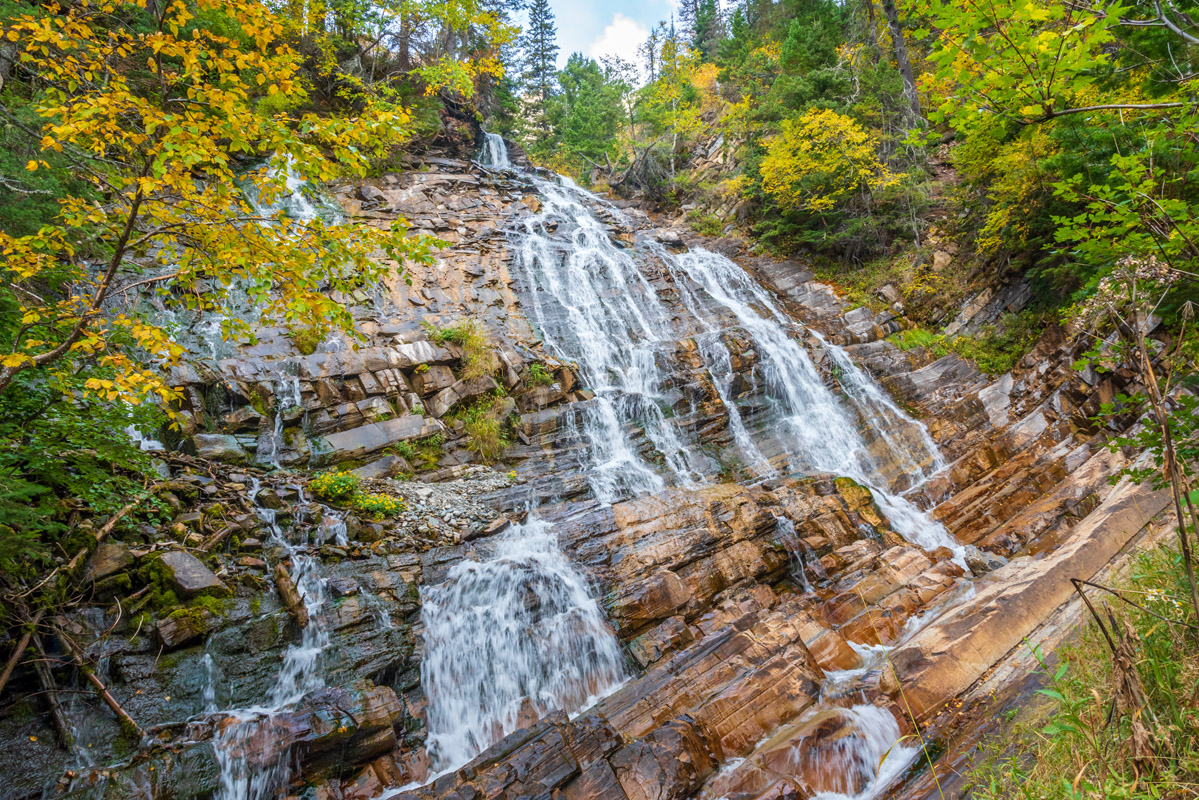 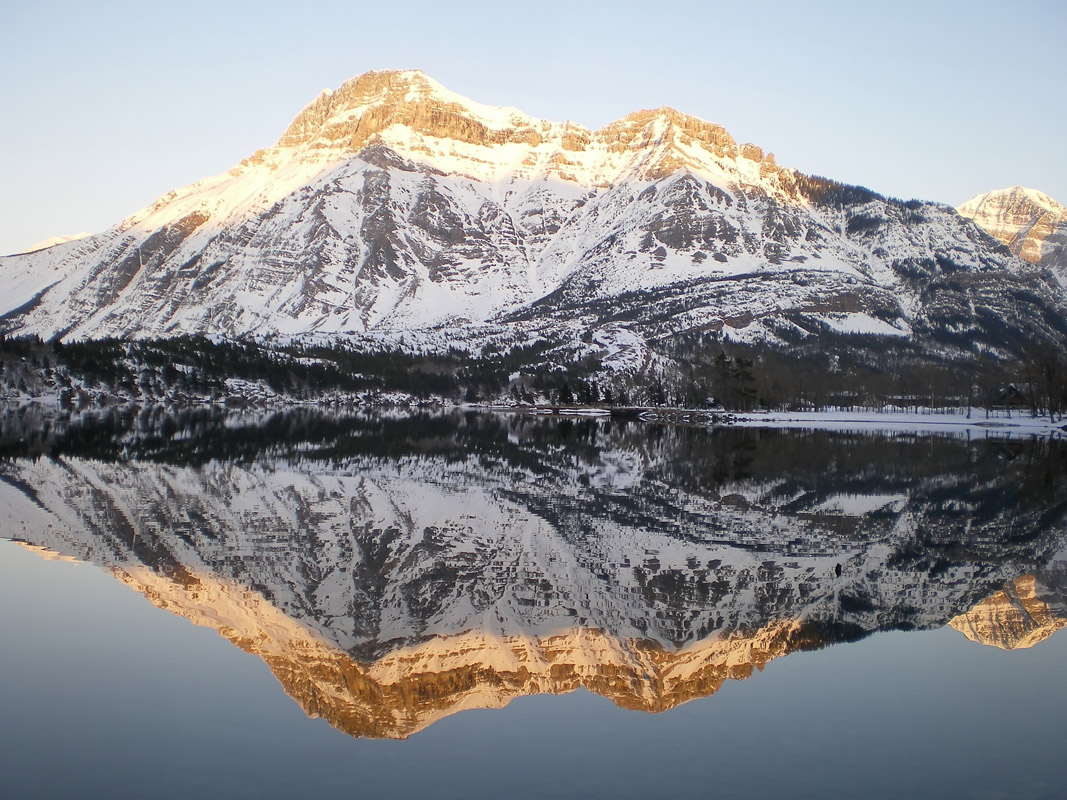 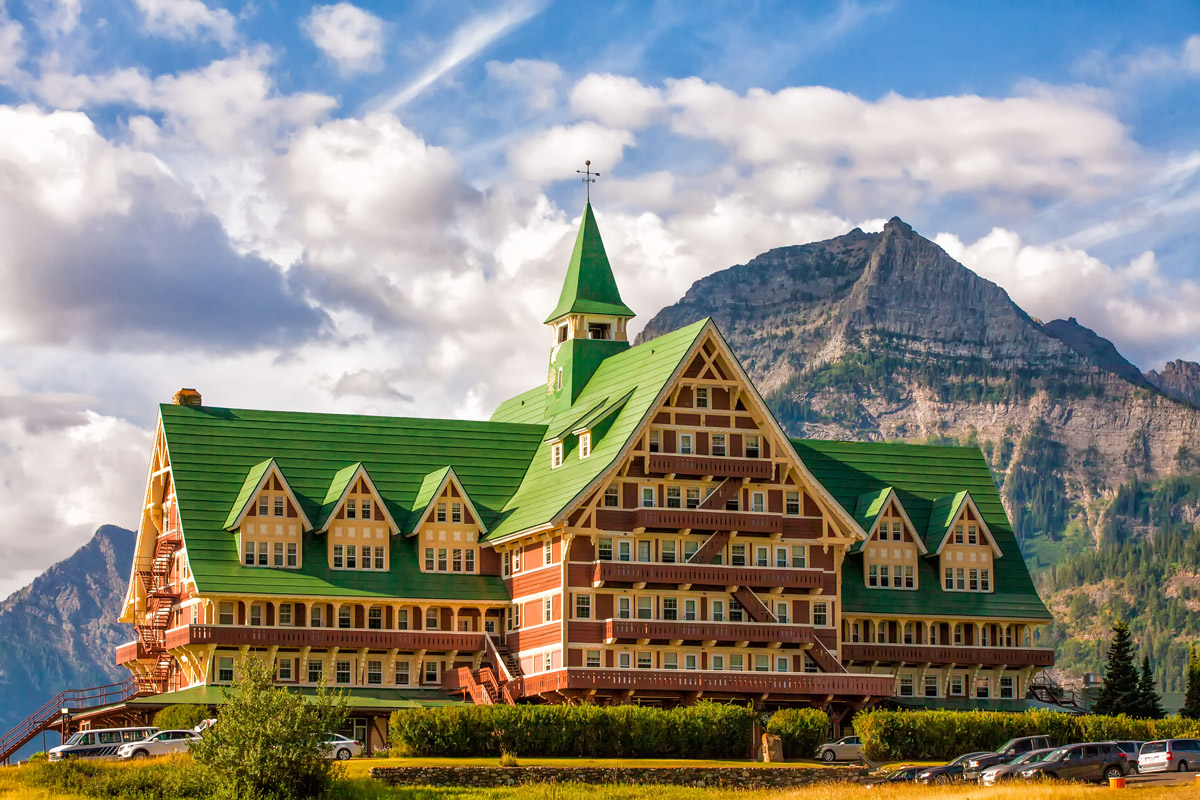