The Bastion Range is a collection of peaks that rises from the western shore of Lillooet Lake in southwestern British Columbia, Canada. The range is a part of the greater Canadian Coast Mountains, which dominate much of the western coast of the country. Bastion Peak is the tallest and most prominent of the range’s 4 mountains as it has an elevation of 2,213 m (7,260 ft) and a prominence of 512 m (1,696 ft). 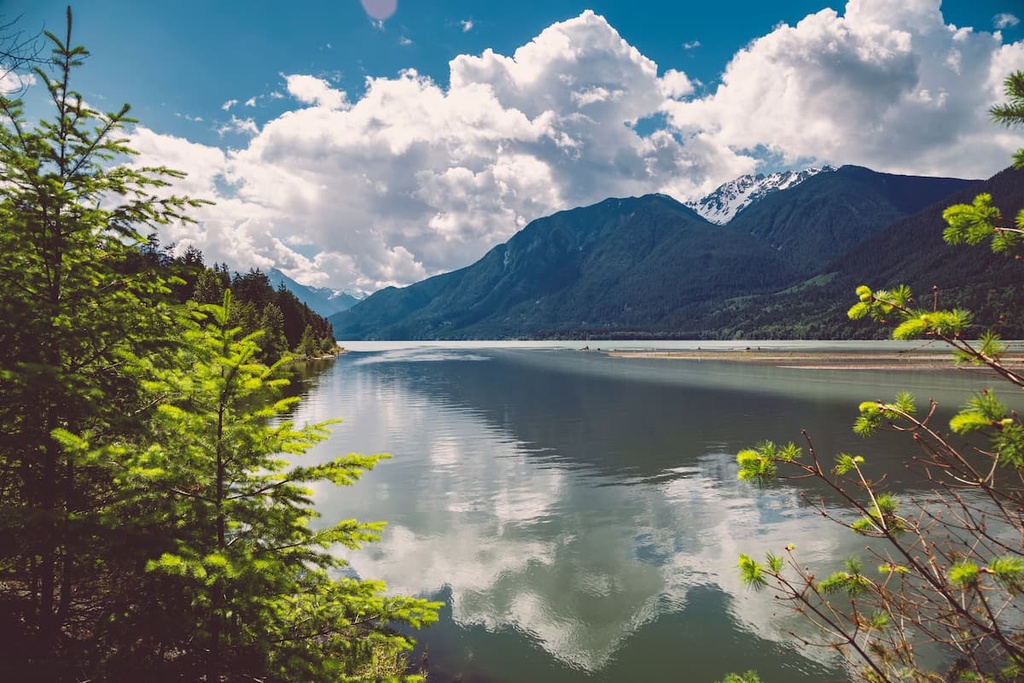 Located along the western coast of British Columbia, Canada, the Bastion Range is a collection of peaks that’s situated on the western shores of Lillooet Lake in the Squamish-Lillooet Regional District.

The range is located just to the north of the Fraser Valley Regional District. It lies within the northwest corner of Garibaldi Provincial Park and it encompasses part of the Mkwal'ts Conservancy.

The Bastion Range is situated within the Pacific Ranges of the Coast Mountains, which dominate the skyline and the western coast of Canada. As it is also part of the Garibaldi Ranges, which is basically encompassed by Garibaldi Provincial Park, the Bastion Range has several adjacent sibling ranges, including the Spearhead Range, Fitzsimmons Range, and McBride Range.

Some of the more famous peaks in the Garibaldi area include Mount Garibaldi, Blackcomb Peak, Whistler Mountain, and The Spearhead.

The Canadian Coast Mountains formed from a chain of volcanic islands that was accreted to the edge of British Columbia nearly 200 million years ago. The Coast Mountains are about 70 percent granitic in composition as they formed from ancient volcanoes and magma intrusions that have since been heavily eroded.

Many volcanoes formed in the region during this time, such as those that are part of the Garibaldi Volcanic Belt. There were also many magma intrusions in the area that didn’t erupt through to the surface.

When magma cools slowly beneath the surface of the Earth, it can form granitic rocks. Over the millions of years since the Coast Intrusions occurred, significant erosion has removed the overlying layers of rock to expose the granite of the Coast Mountains.

Most of the Bastion Range lies within the Coastal Mountain-heather Alpine zone. However, the perimeter slopes and valleys in the range also include some areas with subalpine and montane ecologies.

During the summer, mountain heather communities dominate the alpine below the Bastion Range’s rocky peaks. Winter in the Bastion Range features a deep, warm, maritime snowpack that feeds the region’s major rivers during the spring and summer months.

The subalpine of the Bastion Range is a relatively thin band of the Mountain Hemlock Zone that is dominated by forests of mountain hemlock and amabilis fir. These subalpine forests gradually transition from the range’s alpine zone to create a beautiful mosaic of meadows and scattered trees. This mosaic of meadows eventually becomes a dense forest at lower elevations.

The Bastion Range is part of the traditional territory of the Squamish, Lil’wat, and St’át’imc First Nations. The region’s salmon have been harvested for generations and its cedar trees have been used to make buildings, clothing, and tools.

The arrival of humans to the area is evidenced by the obsidian mines that were uncovered in what is now Garibaldi Provincial Park. Archaeological evidence suggests that these mines have been used for over 10,000 years. This timeline roughly coincides with the retreat of the ice sheet in the region at the end of the last major glaciation, which took place about 10,000 years ago.

As the ice sheet melted, it gave way to lush forests and other areas that were suitable for a wide range of plants and animals. Soon afterward, humans, including the ancestors of many modern-day First Nations, eventually made their way to the region, likely in search of a resource-rich land where they could hunt and gather.

The obsidian that was mined from the Garibaldi Range has also been uncovered in archeological sites across British Columbia and Washington. The stone was traditionally very useful for the First Nations in the region as obsidian can be used to make sharp hunting points and other tools. In fact, even when the people of the Salish culture moved inland, around 4,000 years ago, they continued to mine, use, and trade obsidian.

During the 1860s, thousands of settlers and prospectors rushed into British Columbia in search of gold. While most of these prospectors followed the Douglas Route up to Lillooet Lake, others landed in the area around the Howe Sound and prospected in the creeks as they advanced through the mountains.

As the gold ran out, many miners settled in the region alongside the First Nations who have been inhabiting the area since time immemorial. That said, much of the range is on unceded Squamish, Lil’wat, and St’át’imc First Nations territory.

Interestingly, some of the parks that are located in and around the Bastion Range are among the oldest in the province.

For example, Garibaldi Provincial Park was originally designated as a park reserve in 1920 and it was re-classified as a provincial park in 1927. Of course, some of the region’s parks are much younger, including the Mkwal’ts Conservancy, which was established in 2010.

Best Hikes in the Bastion Range

The Bastion Range is a small but excellent destination for hikers and mountaineers. Although the range itself is quite tiny, it is located next to some of the most popular parks in southwestern British Columbia.

Here’s a quick look at some of the hiking areas in the Bastion Range that you can check out during your next trip to the region.

The northeastern corner of Garibaldi Provincial Park, which is home to the iconic Mount Garibaldi, is technically part of the Bastion Range. About 13,000 years ago, Mount Garibaldi erupted through the Pleistocene ice sheet, creating many of the landforms that we see in the area to this day.

The park boasts a plethora of scenic vistas, wildlife, rugged mountains, shimmering lakes, and raging rivers as well as 90 km (54 mi) of hiking trails. Some of the most popular hikes in the park include the Garibaldi Lake Trail, Panorama Ridge Trail, Elfin Lakes Trail, and Wedgemount Lake Trail.

Or, if you’re looking to bag a peak or two while visiting Garibaldi Provincial Park, some of the most popular peaks to summit include Mount Weart, Wedge Mountain, Mount Price, Mamquam Mountain, and Overlord Mountain.

The Mkwal’ts Conservancy is a protected area that’s centered on the Ure Creek watershed. It is accessible via the Green River Forest Service Road, and it boasts some of the most stunning terrain in the region.

The area that is now part of the conservancy is held in reverence by local First Nations, particularly the Lil’wat Nation, who have used the area for gathering, hunting, fishing, and spiritual purposes for countless generations.

While the area is held in reverence by the Lil’wat Nation, it is also open to the general public for hiking, camping, fishing, and OHV use. During your time in the conservancy, you may happen upon one of the many cultural or archeological sites that are in the area, which include villages with obvious depressions for pit houses, culturally modified trees, cache pits, pictographs, and burial sites.

Nearby Towns and Cities

Vancouver is the largest city in the province of British Columbia (however, it is not the capital—that’s Victoria). It is located about 140 km (84 mi) to the south of the Bastion Range, along the Pacific Coast and Fraser River.

The city of Vancouver boasts many cultural attractions for visitors to check out, including libraries, museums, performing arts centers, art galleries, and a vibrant nightlife scene. Vancouver also hosts many festivals each year, including the Pacific National Exhibition.

In the city, there is Stanley Park, which is one of North America’s largest urban parks. Outside of Vancouver, some of the most popular hiking areas to check out include St. Marks Summit, Quarry Rock, the Grouse Grind, Pacific Spirit Regional Park, Burnaby Lake Park, and Norvan Falls.

Finally, if you’re looking for backcountry experiences or even some great day trips during your time in the city, there are many parks in the mountains surrounding Vancouver that are worth checking out.

Whistler is a resort community that is situated about 20 km (12 mi) to the west of the Bastion Range along the Sea to Sky Highway. It is the main resort community for the Whistler Blackcomb ski area.

The community’s close proximity to Vancouver has made Whistler one of the most popular locations for winter and summer activities in the province. Whistler receives over two million visitors every year, and while tourists typically come for alpine skiing and snowboarding in the area, mountain biking is steadily growing in popularity at the Whistler Blackcomb Resort during the summer months.

The community also boasts a number of hiking opportunities, including in the nearby Fitzsimmons and Spearhead ranges. Some of the most popular hikes that you can enjoy around Whistler are the Singing Pass Trail and the High Note Trail, the latter of which takes you to the top of Whistler Mountain.

Squamish is a community that’s located at the northern end of the Howe Sound. Many miners and prospectors came through the Squamish area during the gold rushes of the nineteenth century in the hopes of striking it rich, though the town is now known more for its outdoor activities than for its mining riches.

That said, even though Squamish is located near Whistler-Blackcomb, which is the largest ski resort in North America; most visitors come to the area for its climbing opportunities. In fact, Squamish is world-renowned for its thousands of climbing and bouldering routes, which are found nearly everywhere around the town from the Stawamus Chief and Shannon Falls to Murrin Park, The Malamute, and the Smoke Bluffs.

There are nearly 2,000 recorded climbing routes around Squamish as well as an additional 2,500 bouldering problems. Squamish is also a popular destination for windsurfing, kiteboarding, ultra-trail running, rafting on the Squamish and Elaho rivers, snowmobiling, hiking, mountaineering, and backcountry skiing, so there’s something for everyone to love in this incredible mountain town. 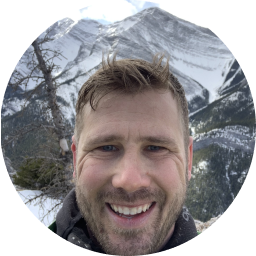 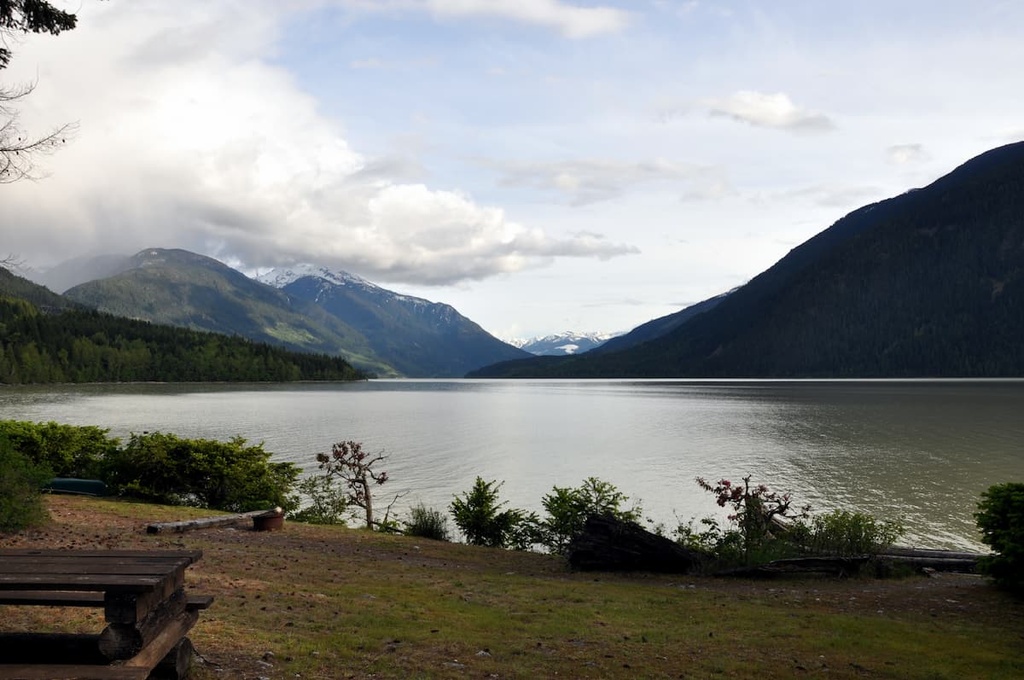 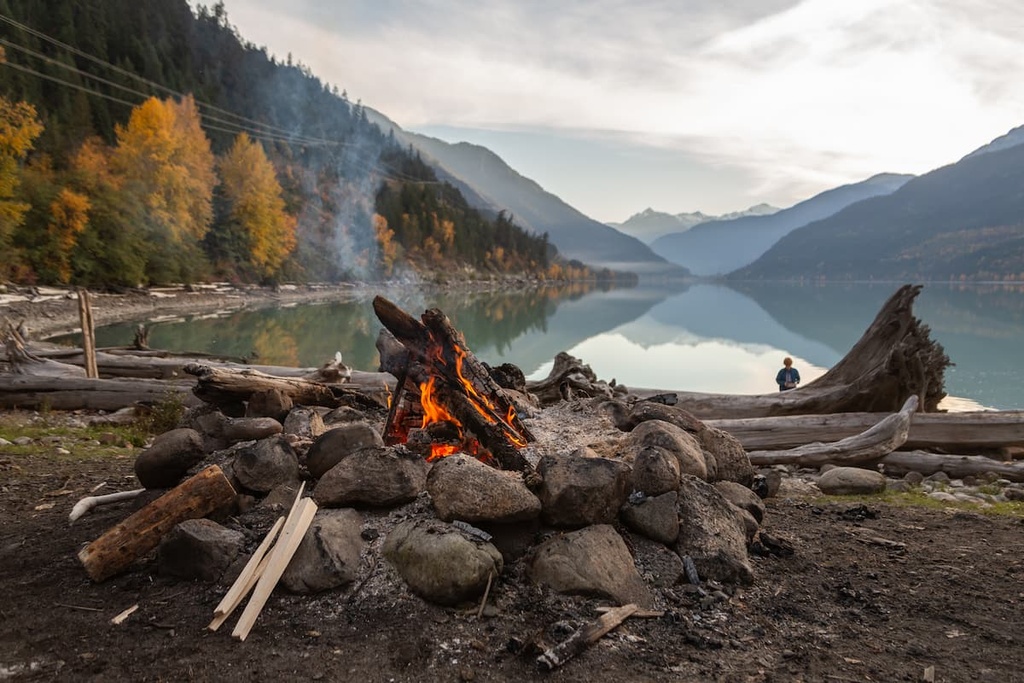 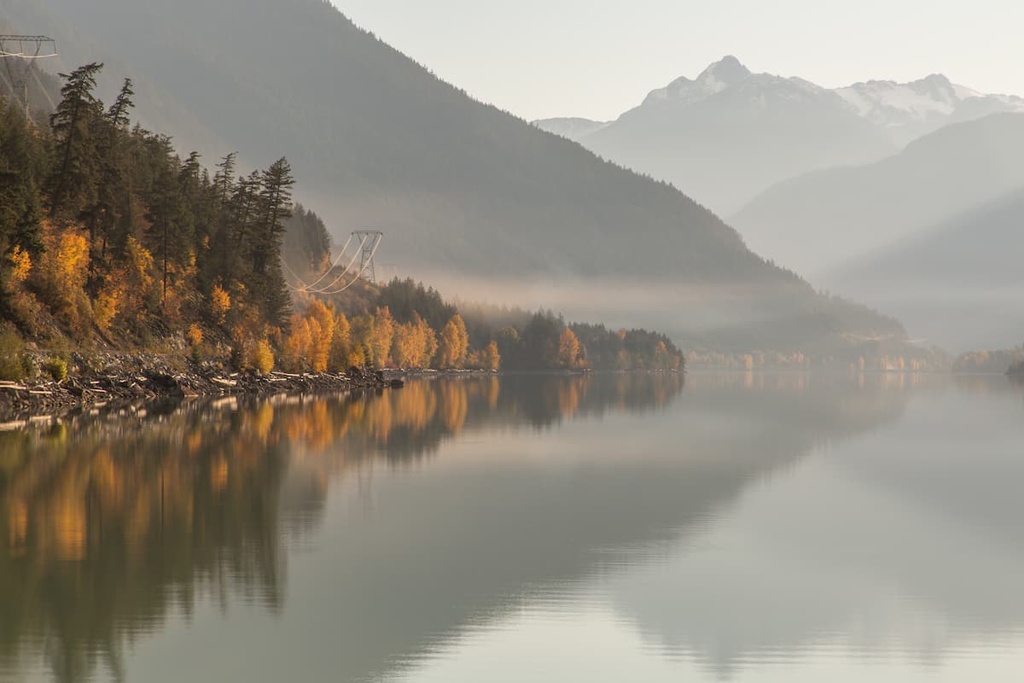 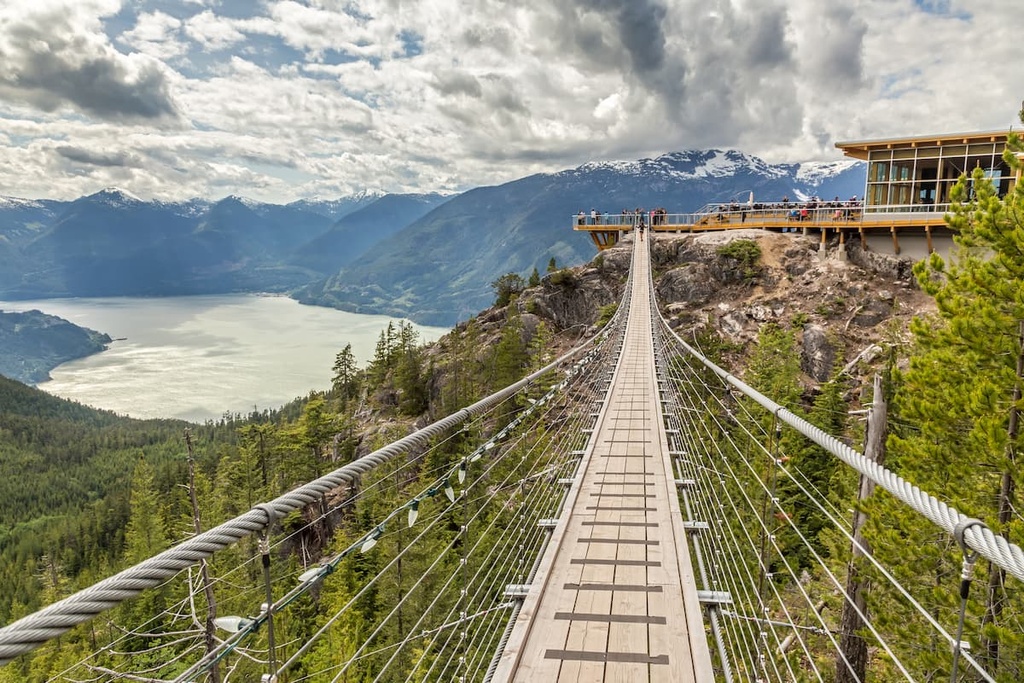 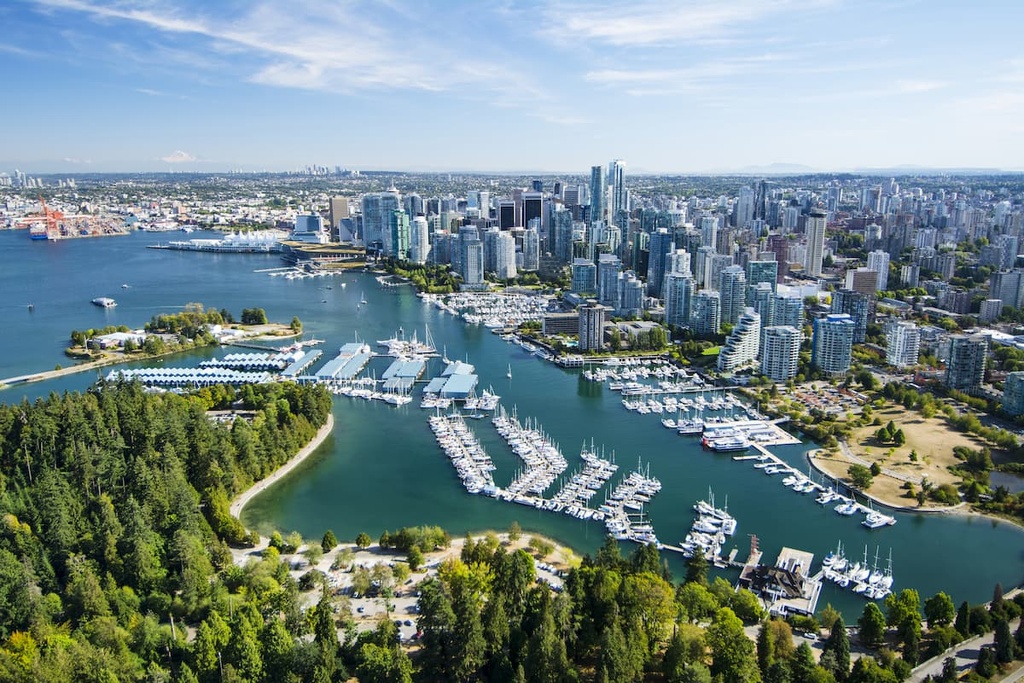