Sankt Gallen (St. Gallen) is one of the 26 cantons of Switzerland. The canton covers 2,026 sq. km (782 sq. miles) of land in the northeastern region of the country, making it the sixth largest canton by area.

The small cantons of Appenzell Innerhoden and Appenzell Ausserhoden are both completely surrounded by Sankt Gallen. The major rivers that run through the region include the Rhine, Linth, Thur, and Seez.

Due to the immense size of the canton of Sankt Gallen, the geography changes drastically throughout its territory. Rolling hills and plains lie near Lake Constance and the Rhine, though they eventually transition into the rugged peaks of the Alps. Parts of both the Appenzell Alps and Glarus Alps lie within Sankt Gallen.

Elevations in the canton range from 398 m (1,306 ft) along the shores of Lake Constance up to the summit of Ringelspitz at 3,247 m (10,653 ft). Sections of the Walensee and Lake Zurich are situated within the canton, along with numerous other small lakes.

Additionally, Sankt Gallen is located near a number of major protected areas in the country. The Swiss Tectonic Arena Sardona lies partially within the canton.

Portions of the Appenzell Alps and Glarus Alps lie within Sankt Gallen. These subranges are part of the greater Alps, which cover the southern portion of both the canton and the country.

The Alps began forming during the Alpine orogeny, which began around 65 million years ago. This mountain building event also helped form the Pyrenees, Himalaya, Karakoram, Caucus, Atlas, Carpathians, and the Hindu Kush.

Marine sediment was left behind when the two plates collided with each other. Extreme pressure caused by the collision led to the creation of recumbent folds that uplifted and formed the Alps. Continual folding transformed the seafloor into the rugged peaks that can be seen throughout the canton today.

During this period, the Swiss Plateau, which forms the northern portion of Switzerland, was also slowly uplifted to its current location. A majority of the peaks within the Alps consist of limestone and sandstone, both of which give the range its distinct jagged peaks.

The Alps were heavily glaciated during the last glacial maximum. Glacial melting further carved out the peaks and sweeping valleys of the region, leaving behind the dramatic changes in elevation within Sankt Gallen.

The drastic changes in elevation found throughout the canton allow for a variety of both flora and fauna to thrive. Many of the meadows found near towns are used for agricultural purposes such as cattle breeding and dairy farming.

Lower elevations are home to populations of oak, tilia, and Norway spruce while higher elevations consist primarily of sycamore maple, silver fir, and European beech. A variety of wildflowers can be found throughout the entire canton.

The western roe deer is abundant within Sankt Gallen. Other mammals in the region include the red fox, red deer, northern chamois, Alpine ibex, alpine marmot, Eurasian stoat, brown hare, and Eurasian red squirrel. Numerous species of shrew, vole, and bat can often be spotted near villages or out in the wilderness of the canton.

Various species of duck inhabit the many waterways of Sankt Gallen, along with other birds such as the house sparrow, Eurasian marsh-harrier, white stork, golden eagle, and great cormorant.

Humans have inhabited the land within Sankt Gallen for thousands of years, with evidence suggesting the first human settlements in the region date back as early as 12,500 BCE. Larger settlements began forming near Lake Constance throughout the Neolithic and Bronze ages.

Throughout the ninth century, the abbey thrived as a center for business and trade, allowing the surrounding town to prosper and grow. Magyar raiders attacked the town and abbey multiple times during the tenth century.

In an effort to put off any further attacks, a wall was built around the abbey in the mid-tenth century. In 1415, the city was able to buy its freedom from Sigismund, Holy Roman Emperor (then the King of Germany and the King of Hungary and Croatia).

Throughout the existence of the Old Swiss Confederacy, Sankt Gallen was an associate of the confederacy (Zugewandte Orte). But, unlike the old canton of Appenzell, it never became a full member of the coalition.

Following the fall of the Helvetic Republic, the region joined the Swiss Confederation in 1803. Today the canton is home to 515,000 residents. The economy of the canton is now primarily centered around farming, tourism, and textiles.

Sankt Gallen is home to numerous trails for hiking and outdoor recreation. Here are some of the most popular trails in the canton:

The Pizol - Wildsee - Schottensee - Schwarzsee - Rossstall - Baschalvasee - Gaffia route is a popular point-to-point trail within the canton. Hikers can take a cable car up the Pizol Hut before walking through the alpine terrain.

This trail walks past the lakes of Wildsee, Schottensee, Schwarzsee and Baschalvasee while the summit of Rossstall towers above. The route is 9.6 km (6 miles) with 532 m (1,745 ft) of elevation gain. Along the route, hikers have views of the surrounding ranges and steep valleys down below.

The Säntis - Schwägalp trail is a stunning yet challenging point-to-point route. The trail begins at the valley floor before climbing steeply up towards the peak of Säntis. The steep ascent is 4.5 km (2.8 miles) long with 1,044 m (3,425 ft) of elevation gain.

Once at the peak, hikers can descend back down the trail or enjoy a cable car ride down to the valley. Säntis marks the tallest peak in the Alpstein and it provides panoramic views of the canton.

The Leistchamm Trail lies on the northern edge of the Walensee. This loop trail is 11.3 km (7 miles) in length with 805 m (2,641 ft) of elevation gain. Situated high above the lake, the route travels above the treeline, near the Amden Weesen ski area.

Stunning views of the Appenzell Alps can be found throughout the route with the lake located far down below. This trail can be completed throughout much of the year.

Looking for a place to stay in Sankt Gallen? Here are some of the best cities and villages to check out in the canton:

Sankt Gallen is the capital of its namesake canton. The city is home to around 170,000 inhabitants and acts as a major hub for eastern Switzerland. The University of St. Gallen lies within the city and is known for being one of the best business schools in all of Europe.

The Abbey of Saint Gall UNESCO World Heritage Site is a major tourist attraction in the region. Other popular sites include Drei Weieren, Wildlife Park Peter and Paul, Natural History Museum St. Gallen, and the Abbey Library of Saint Gall. Besides its rich history, the town also provides quick access to Germany, Austria, and Liechtenstein.

Rapperswil - Jona is a municipality in the canton of Sankt Gallen that’s located at the upper end of Lake Zurich. The region acts as a transportation hub of the region. Within the city lies Rapperswil Castle and a well-preserved old town district.

A wooden bridge crosses over a portion of Lake Zurich, marking the longest wooden bridge in the country. Besides its quaint shops and historical monuments, the municipality provides visitors with easy access to some of the most stunning hikes within the canton. 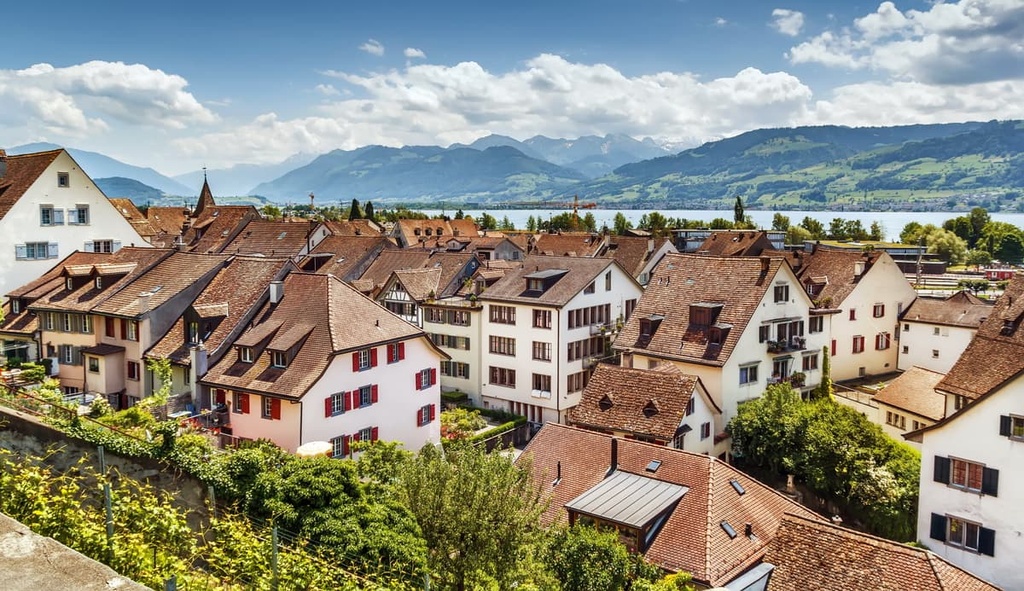 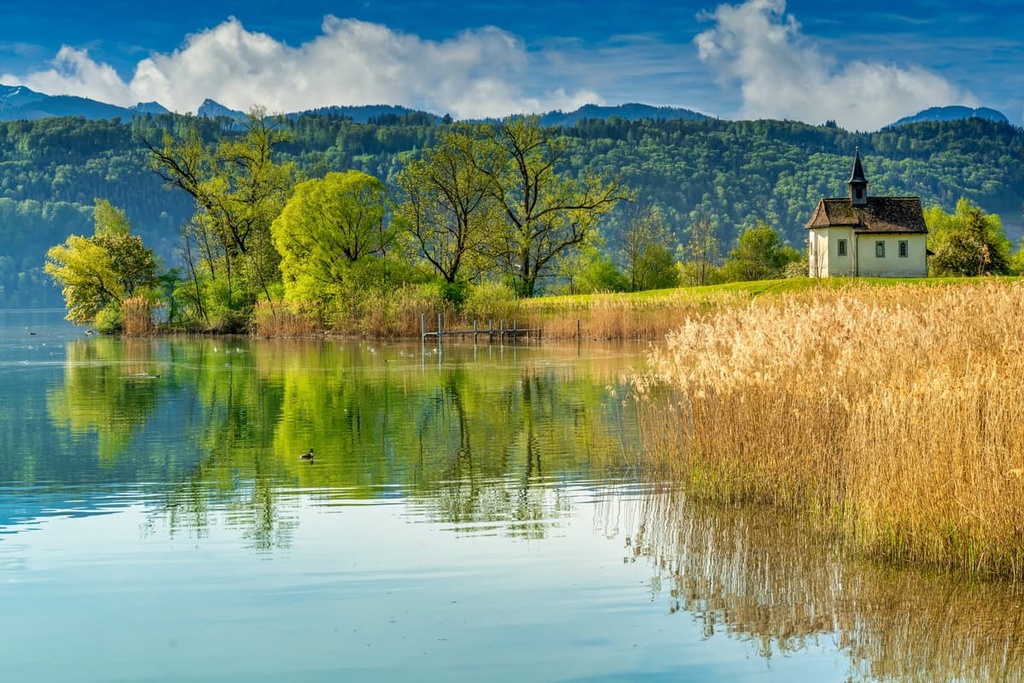 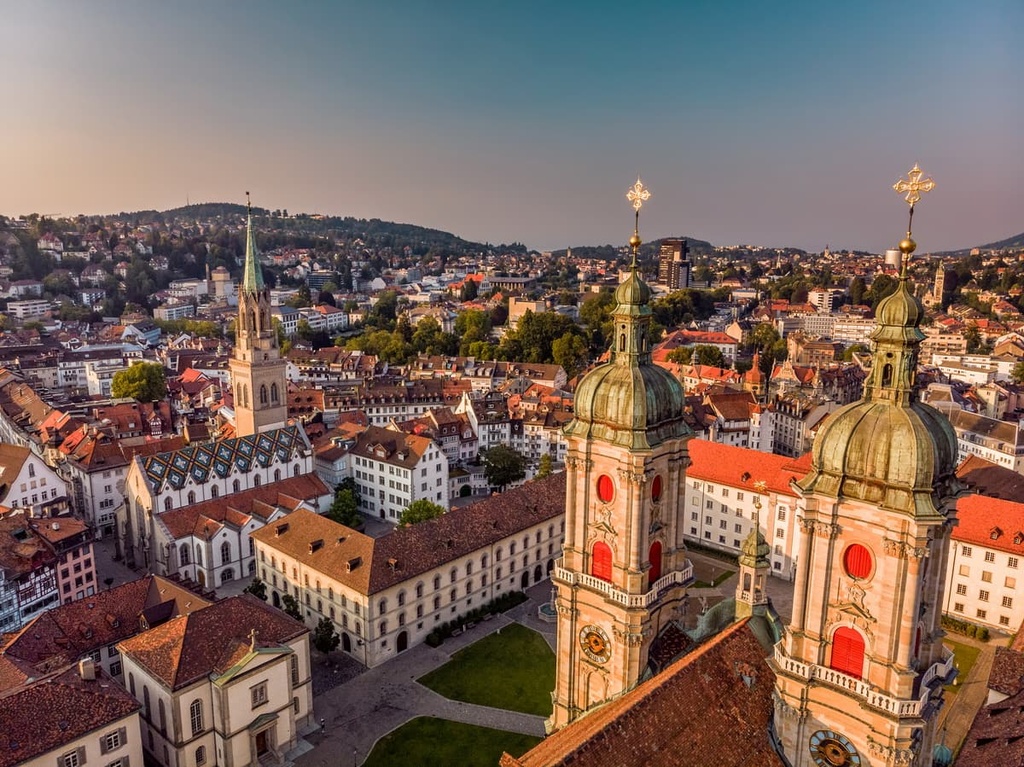 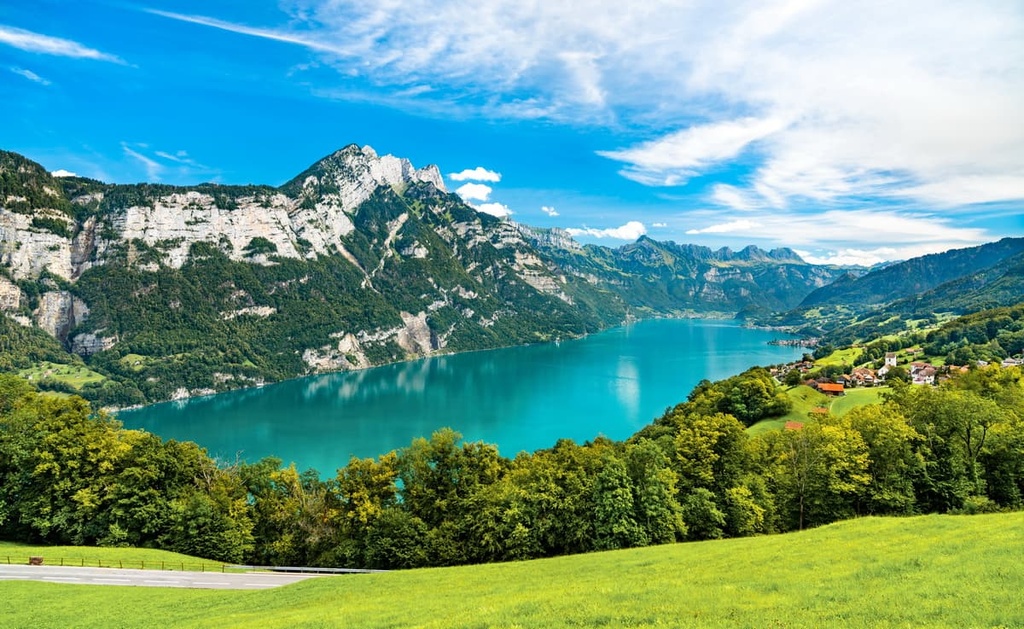 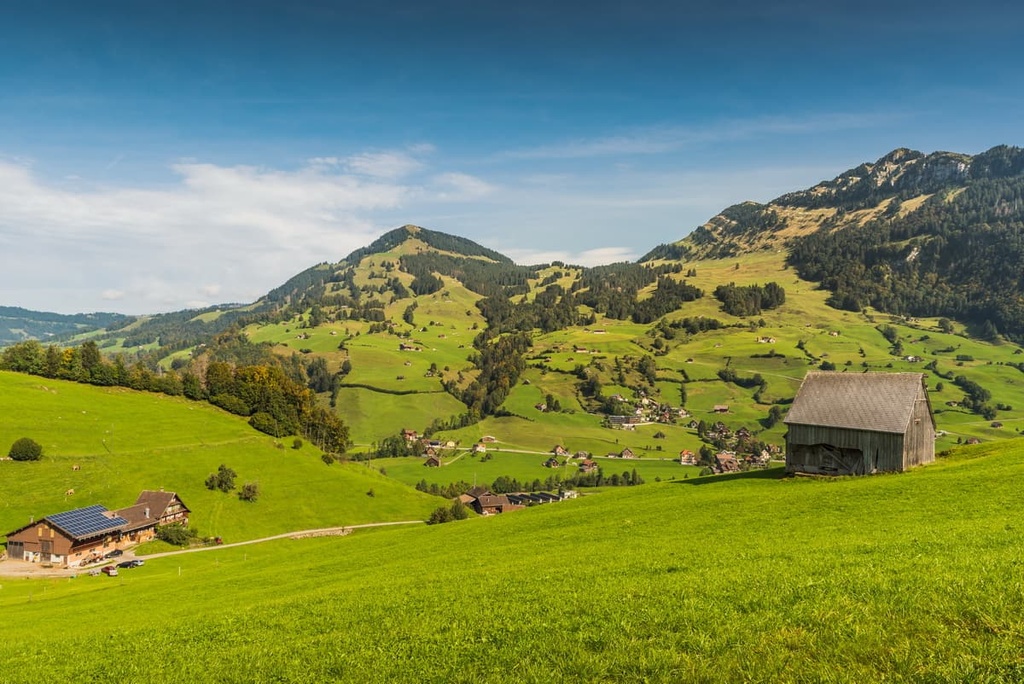 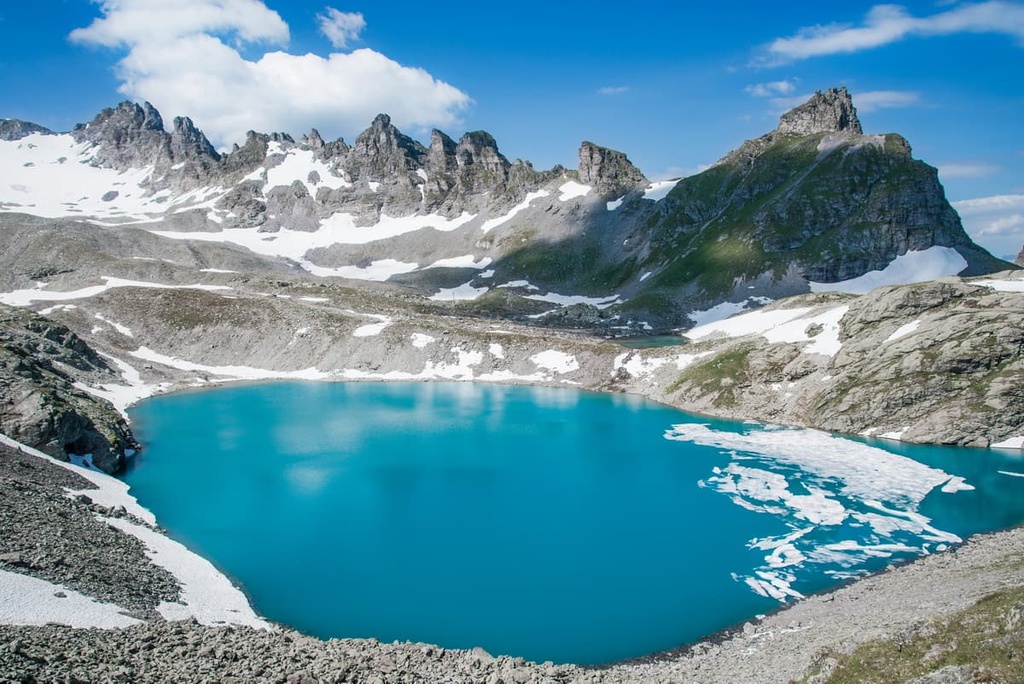