Liechtenstein is a small country located in central Europe. The microstate is situated in the Alps and is home to 92 named peaks. The tallest peak in Liechtenstein is Vorder Grauspitz at 2,600 m (8,530 ft) in elevation while the most prominent peak is Kuhgrat with 682 m (2,237 ft) of prominence. 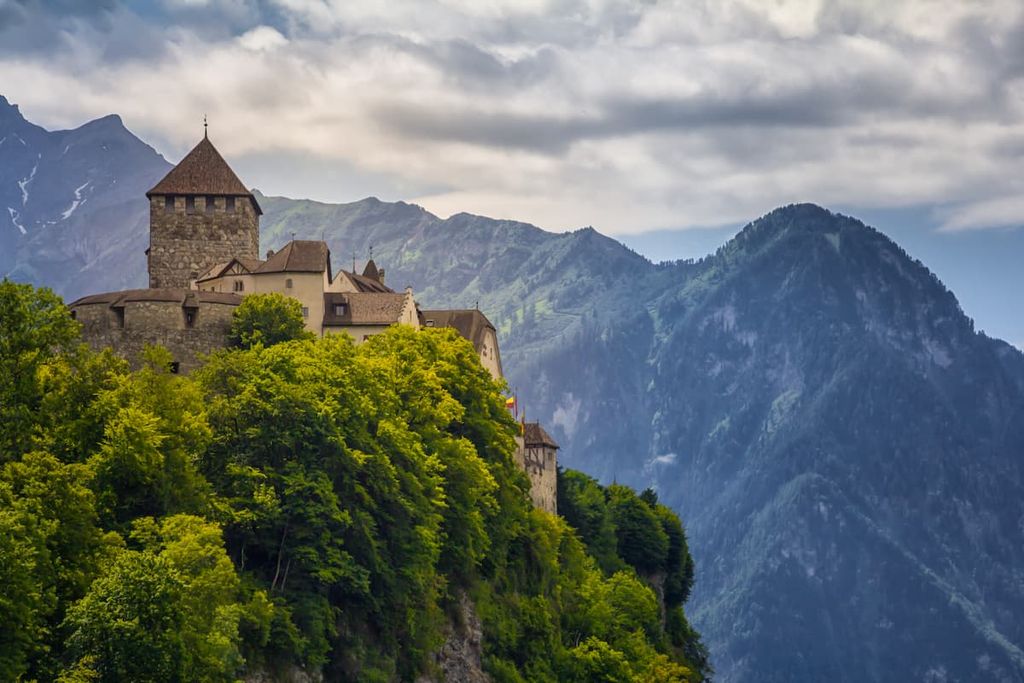 Liechtenstein, officially the Principality of Liechtenstein (German: Fürstentum Liechtenstein), is a small microstate situated between Switzerland and Austria. The microstate is one of only two doubly landlocked countries in the entire world (the other is Uzbekistan).

By area, Liechtenstein is the sixth smallest country in the world as it encompasses just 160 square kilometers (62 square miles) of territory. The country is situated within the Upper Rhine Valley within the greater Alps.

The Austrian state of Vorarlberg borders Liechtenstein in the east while the Swiss cantons of Grisons and St. Gallen mark its southern and western borders. The country is approximately 24 km (15 miles) long from north to south.

Around half of the territory is quite mountainous. Liechtenstein lies within the Western Rhaetian Alps, which are part of the Central Eastern Alps.

Despite the country’s Alpine location, Liechtenstein has much milder weather than surrounding regions in Switzerland and Austria. Orchards and meadows can be found along the western edge of the country.

The longest and largest body of water within Liechtenstein is the river Rhine, which marks the country’s border with Switzerland. Another major river in the country is the Samina.

The Gampriner Seelein is the only naturally occurring lake in the country. It formed during a flood in 1927. The artificially created Steg Reservoir helps generate electricity for the region and it is the largest body of water in Liechtenstein.

Additionally, Liechtenstein has several parks for year-round outdoor recreation. Some of the most popular parks in the country include Haberfeld Nature Park and Ruggeller Riet Nature Reserve.

Liechtenstein lies within the Western Rhaetian Alps, which are part of the larger Central Eastern Alps. The Rhaetian Alps cover much of the small country, and parts of the range extend into both Switzerland and Austria.

These rugged mountains are part of the Northern Limestone Alps, which form the geological border between the Eastern and Western Alps.

The Alps are the highest mountain range that lies entirely within the European continent. Many of the major peaks in the range, including those within Liechtenstein, formed during the Alpine orogeny. This mountain building event occurred from 65 million to 2 million years ago.

As the two continental plates collided, the immense pressure forced the land upwards, forming the Alpide belt, which includes a long chain of mountain ranges such as the Alps. The marine sediment that once lay along the floor of the Tethys Ocean was continually compacted through thrust faults and recumbent folds.

The peaks within Liechtenstein were heavily glaciated during the Pleistocene epoch. As temperatures rose, these retreating glaciers began carving out the vast and rugged peaks that can be seen in the country today.

Many of the peaks within the country, consists primarily of sedimentary rocks such as limestone.

Despite its relatively small size, Liechtenstein is home to a variety of both flora and fauna. The drastic changes in elevation in the country allow for various ecosystems to thrive.

Common trees in the country include sycamore, maple, alder, larch, and red beech. In forested areas, various species of pine trees are common along with silver fir.

The moderate temperatures in the Rhine Valley provide the ideal habitat for both a number of orchid species and wineries. At higher elevations, visitors can often spot alpine rose, edelweiss, and gentian.

Liechtenstein is home to populations of deers, chamois, badgers, and foxes, all which often inhabit the more forested regions of the country. Multiple species of ravens and eagles can also be spotted along with over 100 other species of birds.

Human history in Liechtenstein dates back thousands of years. The first signs of human settlement in what is now Liechtenstein are preserved in the remains of Neolithic farms that date back to around 5300 BCE.

During the Iron Age, the Hallstatt and La Tène cultures thrived. The Helvetii tribe also inhabited parts of the surrounding alpine region. Julius Caesar defeated the Alpine tribes in the Battle of Bibracte in 58 BCE, bringing the region under the rule of the Roman Republic.

Roman camps were destroyed in 260 CE by the Alemanni people who would later settle in the region around 450 CE. The region became part of the Frankish Empire in 504 CE and later part of East Francia in 814 CE.

During the thirteenth century, much of the Alpine plateau was ruled by four major houses. The Habsburgs controlled what is now Liechtenstein until the House of Liechtenstein took over in 1699. They named the region after the Liechtenstein family who hailed from Lower Austria.

In the seventeenth century, the House of Liechtenstein purchased land from the Holy Roman Empire. This set the framework for the territory that is now part of present day Liechtenstein. From 1815 to 1866, the region was part of the German Confederation.

The country’s army was disbanded in 1868 due to financial reasons. The completion of a railway connecting Switzerland and present day Austria allowed for the economy of Liechtenstein to grow in the years that followed.

Liechtenstein remained neutral during both World Wars alongside neighboring Switzerland. Besides being known for its stunning landscapes, today Liechtenstein is known as a center for finance and business.

The country is currently one of the wealthiest countries in the world. In fact, it has the highest per capita nominal GDP (gross domestic product) of any country in the world (though some figures place it second after Monaco).

Liechtenstein is home to numerous trails for hiking and outdoor recreation. Here are some of the most popular trails and regions in the country:

Fürstensteig is one of the most popular hiking routes in the region. This loop trail is located near Triesenberg, and it is 10.6 km (6.6 miles) long with 894 m (2,933 ft) of elevation gain. Hikers start near the city of Vaduz before climbing steadily up into the mountains.

The lower portions of the trail wind through dense forests with occasional viewpoints above treeline. The trail leads hikers to the summits of Gafleispitz and Kuhgrat before descending back to the trailhead. The route can be extended to reach Helwangspitz and Alpspitz, too.

Hikers on this route can experience panoramic views throughout while passing by numerous summits. From the ridgeline, hikers can see the Swiss Alps and Lake Constance to the north. The trail is technical in nature as it requires that you traverse along, around, and under rugged rock formations.

Since most of the trail is located above treeline, hikers have views of both the Rhine Valley and Rhaetian Alps. These dramatic changes in elevation provide the ideal setting to observe the region’s natural beauty.

Looking for a place to stay in Liechtenstein? Here are some of the best cities and villages to check out in the country:

Vaduz is the capital of Liechtenstein, and it is home to around 5,700 people. Situated within the Rhine Valley, Vaduz is centrally located in the country. Despite being within the Alps, Vaduz has a more temperate climate, with a more moderate temperature variation than what is found in other Alpine regions.

Many of the country’s major wineries are located near the city within the Rhine Valley. Vaduz Castle (German: Schloss Vaduz) is a 700 year old castle that overlooks the city, making it a major landmark. Other popular attractions include the Cathedral of St. Florin and the State Art Gallery of Modern and Contemporary Art.

Visitors to the region should also visit the Old Rhine Bridge (Alte Rheinbrücke) which crosses over the river Rhine, connecting the city to Switzerland.

The village of Malbun lies within the Triesenberg municipality of Liechtenstein. Situated in the southeastern portion of the country, Malbun is a small mountain ski resort village. Malbun is home to the only ski resort in the country, and it lies less than 2 km (1.2 mi) from the Austrian border.

The Bergbahnen Malbun is the ski area located in the village. It is home to hiking trails during the summer months. From the top of the eastern ski lift in the resort, visitors can take in the views of the Alps as they cross from Switzerland into Austria. 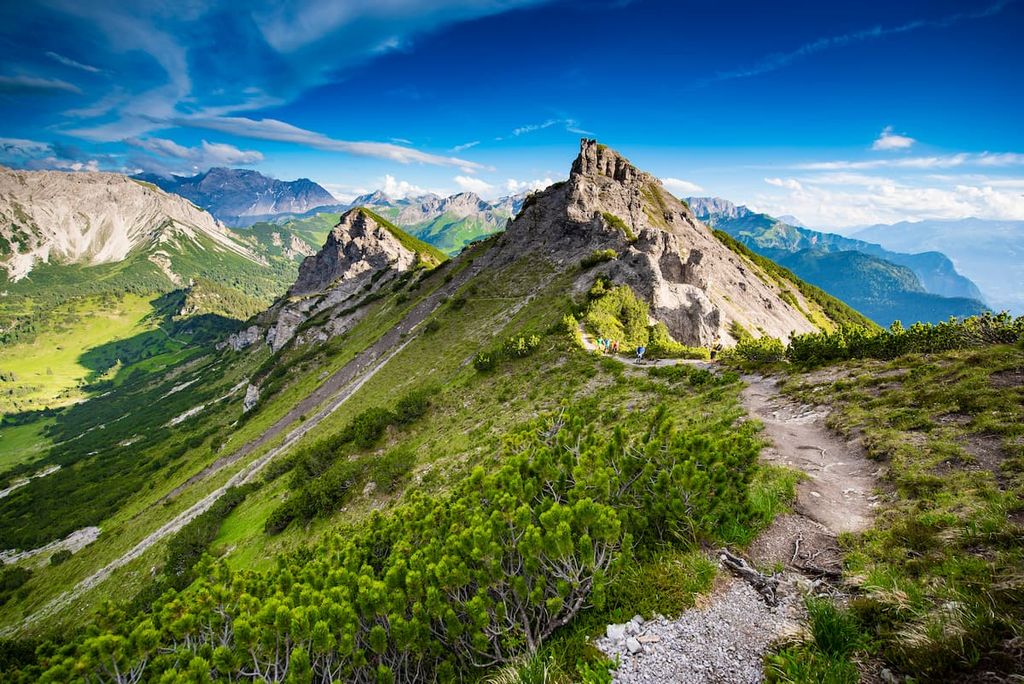 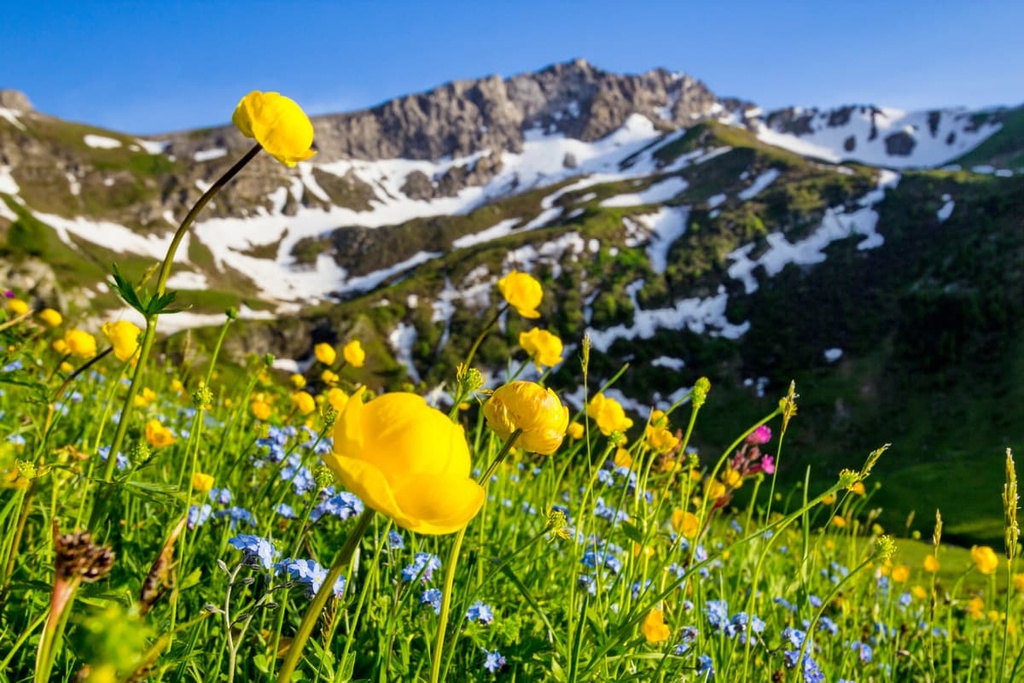 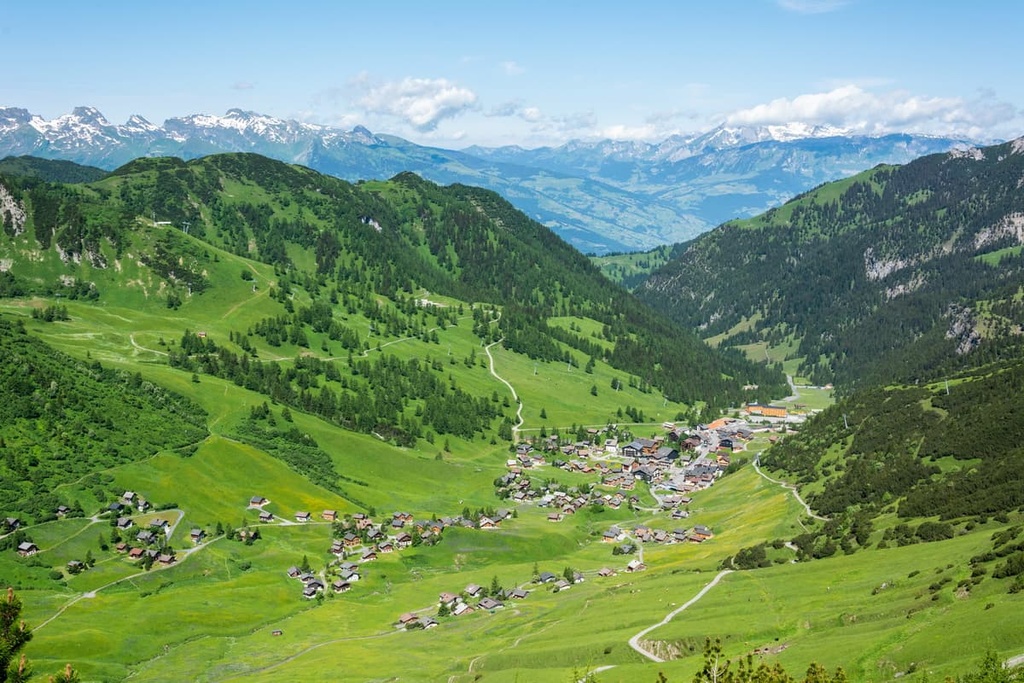 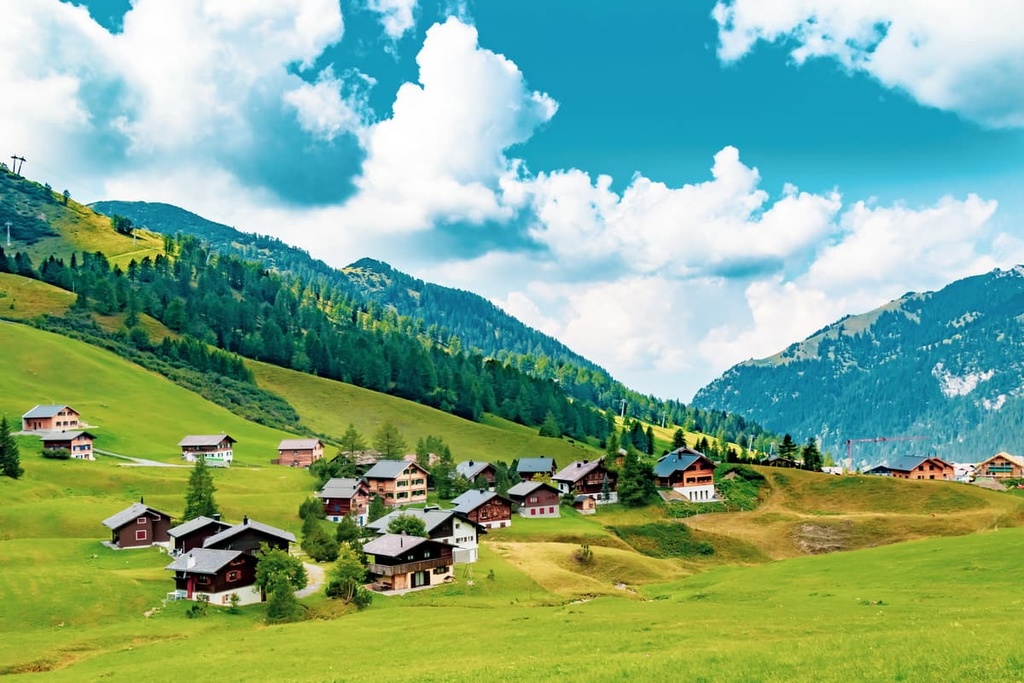 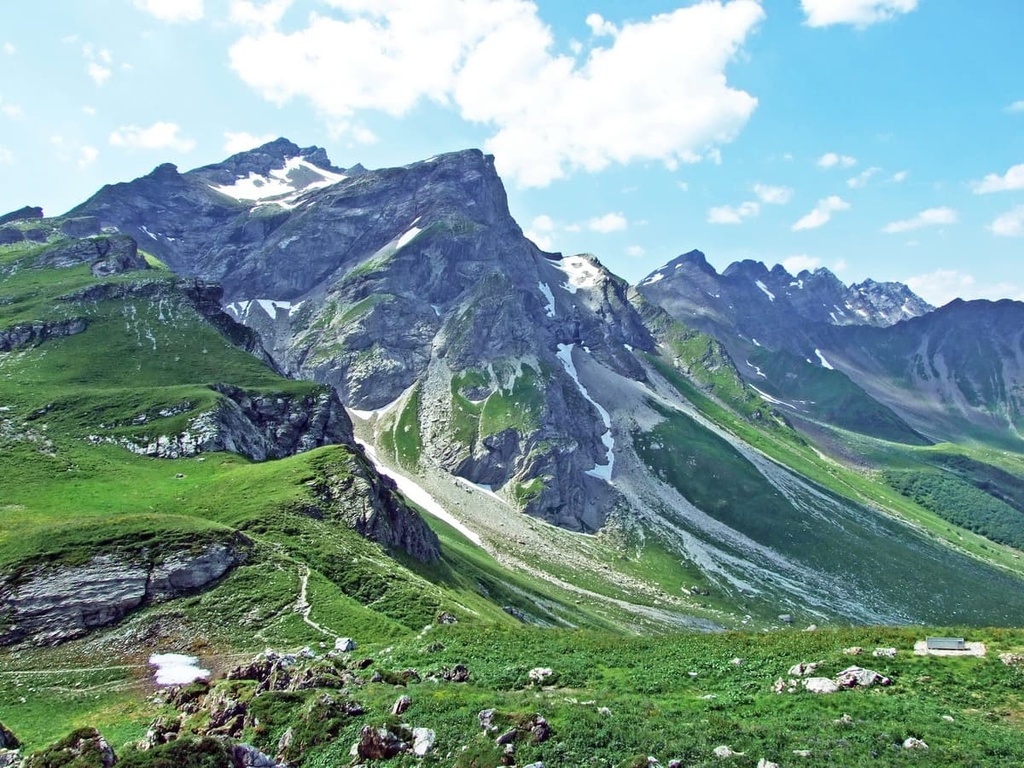 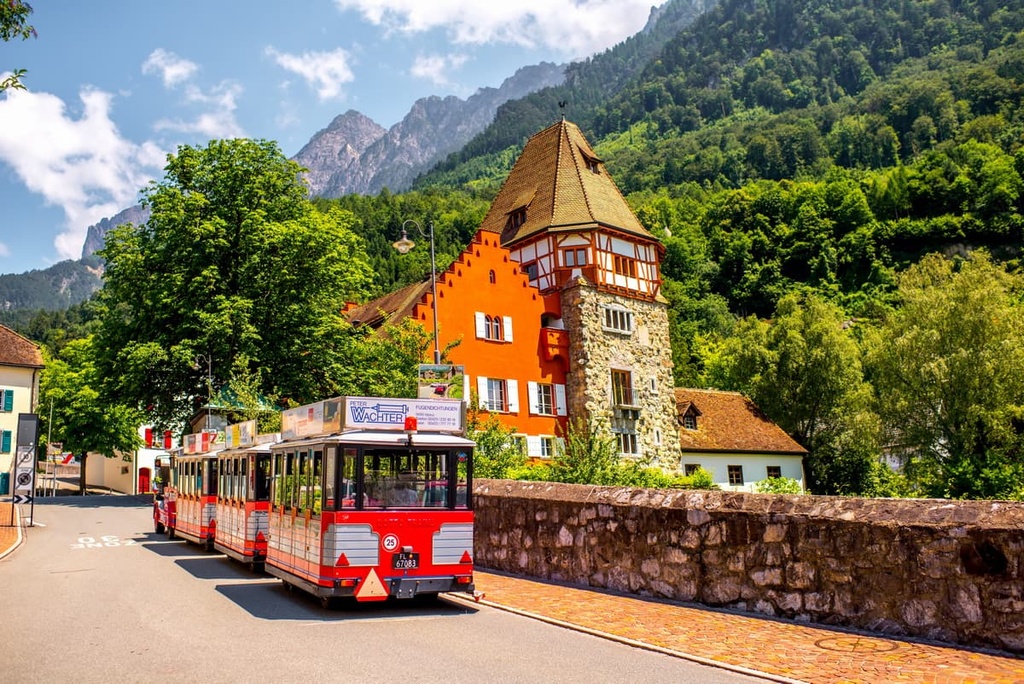