Schwyz is a canton located in central Switzerland. The canton is situated between Lake Lucerne and Lake Zürich with the Alps lying directly to the south. There are 300 named peaks in the canton. The tallest is Bös Fulen at 2,801 m (9,190 ft) in elevation while the most prominent is Rigi with 1,288 m (4226 ft) of prominence.

Schwyz (Kanton Schwyz) is one of the 26 cantons in Switzerland. The canton spans 908 sq. km (351 sq. miles) across central Switzerland within the northern foothills of the Alps.

Due to its location in the heart of Switzerland, Schwyz is surrounded by a number of other cantons. This includes Zug, Zurich, and Sankt Gallen to the north, Glarus to the east, Uri and Nidwalden to the south, and Lucerne to the west.

Within the canton, the landscape is dominated by steep rolling hills while towering peaks extend just to the south of the region. The river Sihl also traverses the canton.

The tallest peaks in Schwyz are situated between Lake Lucerne and Lake Zürich. Here, dense sections of forest are interspersed with alpine pastures, small mountain towns, and steep rock faces.

These foothills slowly transition down to the shores of two major lakes in the region. The fertile hillsides allow for over 40 percent of the land in Schwyz to be used for agricultural purposes.

Around 34 percent of the canton is covered in forested patches while 20 percent is steep rock faces and mountain cliffs.

Schwyz spans from the foothills of the Alps to the southern edge of the Swiss Plateau. The plateau began forming around 60 million years ago. Today, the plateau covers around 30 percent of Switzerland.

The Alps, including the foothills of the canton, make up the landscape for most of Schwyz. These rolling foothills and rugged peaks began forming around 65 million years ago.

The Alps formed during the Alpine orogeny, along with the Pyrenees, Himalaya, Karakoram, Caucus, Atlas, Carpathians, and the Hindu Kush. The Tethys Ocean once was situated between the supercontinents of Gondwana and Laurasia.

As the two tectonic plates collided, the water of the ocean was forced to retreat and the peaks of the Alps began to form. Millions of years of pressure and recumbent folds pushed up the landmass even further, eventually forming both the plateau and the Alps.

Sandstone and limestone, which once lay upon the ocean floor, helped form the natural structures apparent today. Over the course of millions of years, erosive forces carved out the distinct landscape of the peaks that we see in the region today.

During the last glacial maximum, vast glaciers covered much of the landscape. As the glaciers slowly retreated, the rolling hills, valleys, lakes, and peaks that we see today were left behind. Remnants of these once-great glaciers can be found amongst the peaks just to the south of Schwyz.

Both flora and fauna thrive within the varying landscapes of Schwyz. The most common tree species include European beech, silver fir, and Sycamore maple.

Lower elevations in the canton are home to patches of Norway spruce, especially near the shores of the major lakes. Species of oak and tilia are also common at lower elevations.

Alpine fields in the region are home to a variety of wildflowers during the summer months. Popular species include willow gentian, common heather, great horsetail, fragrant orchid, monk’s hood, silver thistle, and germander speedwell amongst various others.

Mammals can be found throughout the canton with the most common species being the western roe deer, northern chamois, ibex, European fallow deer, marmot, and brown hare. Other species include wild boar, red fox, common hedgehog, Eurasian beaver, and stone marten.

The skies of Schwyz are home to various species of birds and bats. Most common include the black redstart, coal tit, great egret, golden eagle, and Eurasian sparrowhawk. The lakes of the region provide the ideal habitat for brown trout, chub, and European perch.

Signs of human settlement in Schwyz date back as early as 12,500 BCE. The Neolithic and Bronze Age brought about larger settlements to the region, especially around the major lakes.

The Romans took over the region and a vicus was established in present day Kempraten. During Roman rule, the settlements continued to prosper around the shores of the region’s major lakes.

The Alemanni arrived during the sixth century CE and the region became part of the Duchy of Alsace. Communities in the region continued to grow and Christianity became the major religion of the people.

The cantons of Schwyz, Unterwladen, and Uri came together in 1291 CE to form the original Swiss Confederation. Schwyz took on a leadership role early on, which is one of the reasons why the country of Switzerland derived its name from the canton. In fact, the current flag of Switzerland also derives from the coat of arms of Schwyz.

Following the French Revolution in 1789, many people within Schwyz pushed back against the idea of a Helvetic Republic. In 1803, Schwyz regained much of the freedom and independence that had been limited under Napoleon’s rule.

However, the construction of railroads during the 19th century brought about increased industry to the region. In fact, the population of Schwyz doubled during this time, particularly thanks to a large number of immigrants from Italy. At the same time, many people left Schwyz and moved to the United States.

Today, Schwyz has become a popular place for tourism. Einsiedeln is a particularly popular tourist destination due to its tenth-century Benedictine monastery (Einsiedeln Abbey).

Furthermore, Schwyz is arguably best known for its production of the Swiss Army Knife, which is manufactured in the village of Ibach by Victorinox. However, note that the company’s visitor center is located in Brunnen, which is a resort village on Lake Lucerne in Schwyz.

Schwyz is home to numerous trails for hiking and outdoor recreation. Here are some of the most popular trails and regions in the canton:

The Fronalpstock - Klingenstock loop trail is one of the most popular routes in the entire canton. It is 13.5 km (8.4 miles) long with 987 m (3,238 ft) of elevation gain. Located just east of Lake Lucerne, the trail offers sweeping views of both the lake and the snow-capped Alps.

A ski lift takes hikers to below the summit of Klingenstock. The route then traverses along a ridgeline with panoramic views in every direction. Wildflowers and alpine meadows can be spotted throughout the hike.

Lake Lucerne seen from the top of Fronalpstock

The trail winds slowly before a steep ascent up to Rigi Staffel. Hikers pass through forested patches, alpine pastures, and small communities with sweeping views throughout.

The Grossen Mythen trail begins in the village of Brunni. Hikers have the option to take a cable car part way or hike all the way to the summit. The route is 7.6 km (4.7 miles) long and has 668 m (2,191 ft) of elevation gain.

From the summit, hikers have panoramic views of much of the canton. Vast rolling hills and farm lands are surrounded by pristine lakes and steep peaks.

Looking for a place to stay in Schwyz? Here are some of the best cities and villages to check out in the region:

Located near the center of the canton lies the capital, Schwyz, bearing the same name as the canton. The city has a population of around 16,000 people and is home to the Forum of Swiss History.

Schwyz is situated between Lake Lucerne and Lake Lauerz. During the winter months, Schwyz offers easy access to the Mythenregion, Stoos, and Sattel-Hochstuckli ski resorts.

Along the northwestern shore of Lake Lucerne just outside of the canton of Schwyz lies the city of Lucerne. The city has around 82,000 residents, making it one of the most populous cities in central Switzerland.

Besides being surrounded by hiking trails and a picturesque lake, Lucerne is home to the oldest wooden bridge in Europe, known as Kapellbrücke (chapel bridge). Mount Pilatus towers above the town and can be reached by both hiking trails or a gondola. 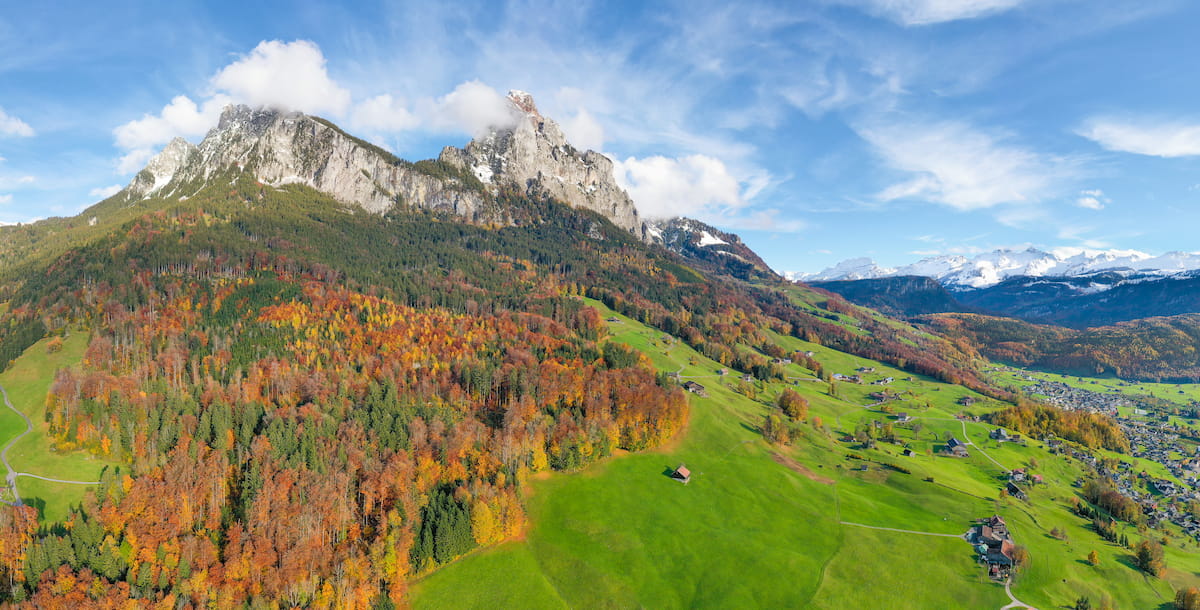 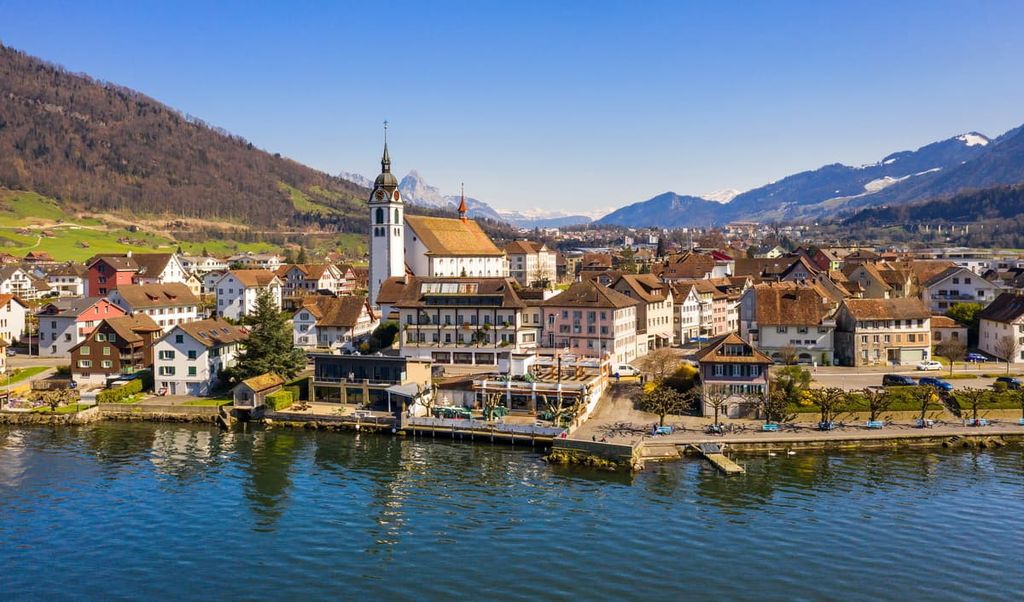 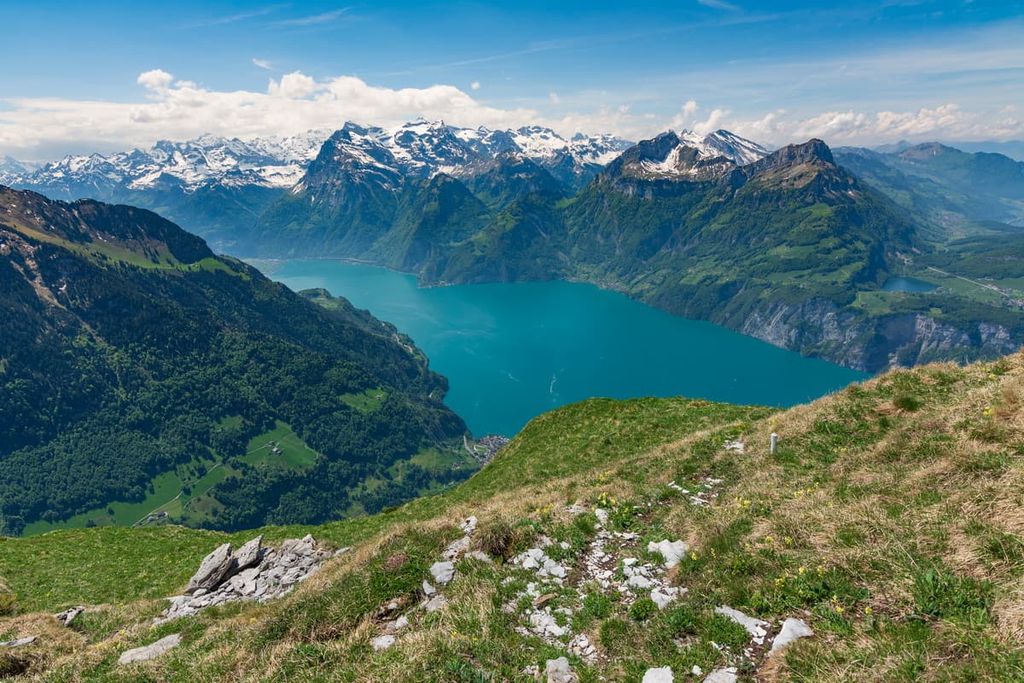 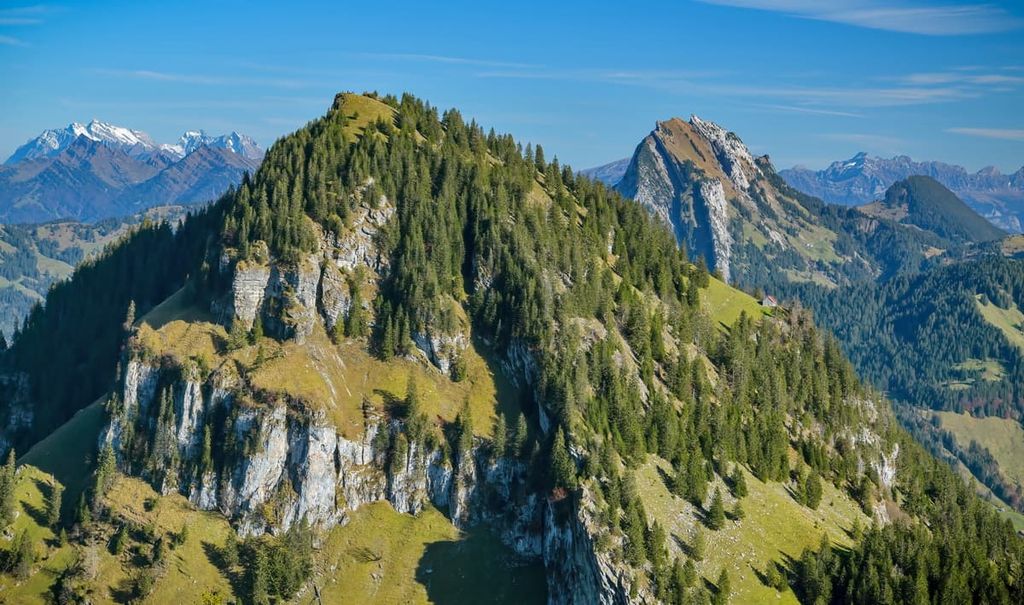 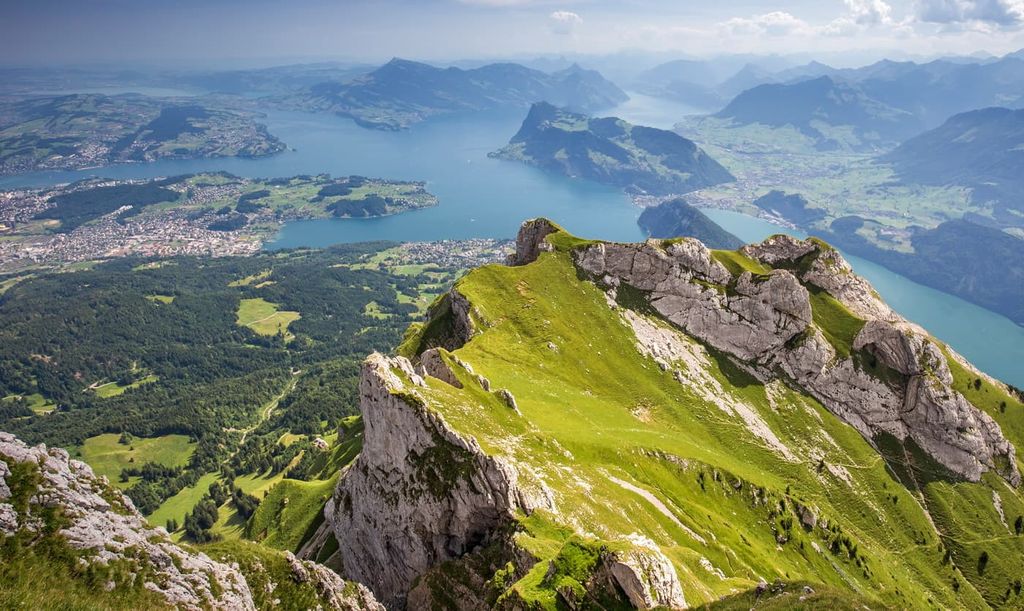