Parc Ela is the largest nature park in Switzerland. The park is situated within the canton of Grisons and its rugged and wild terrain is contrasted with the many small villages that dot its valleys. The tallest and most prominent peak in Parc Ela is Piz Kesch, which stands at 3,418 m (11,214 ft) in elevation and has 1,500 m (4,921 ft) of prominence. 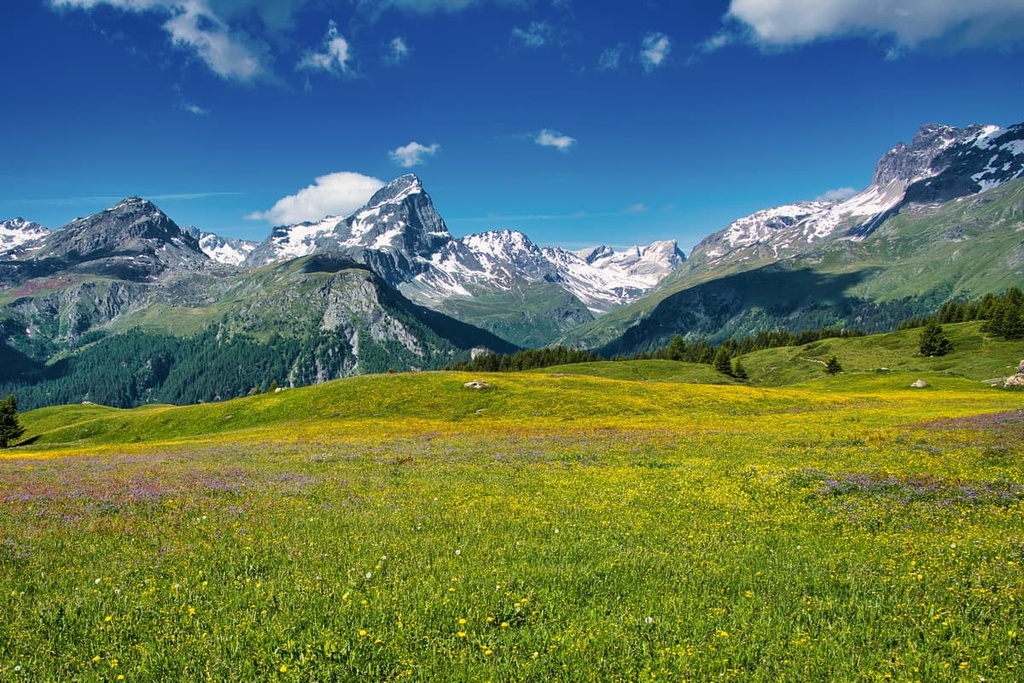 Parc Ela (Romansh: Ela Park) lies in central Grisons in southeastern Switzerland near the country’s border with Italy. The park spans 548 sq. km (211 sq. miles) and contains various villages that have a total population of around 5,200 people.

Three cultures and languages (German, Romansh, and Italian) converge within the canton of Grisons and in Parc Ela. The rugged peaks of the Alps tower above the sweeping valleys found within the park.

Three historical alpine passes—Septimer, Julier, and Albula—lie within the park. Elevations range from the lowest point in Schinschlucht at 745 m (2,444 ft), up to the summit of Piz Kesch.

Despite the fact that multiple municipalities are located within the park, Parc Ela still provides wild terrain that ranges from quaint valley floors to treacherous alpine peaks. Piz Lunghin lies within the park and has a triple watershed, sending water to the North Sea, Adriatic Sea, and Black Sea.

Additionally, Parc Ela is located near a number of major protected parks in the region. Beverin Nature Park lies directly west while Swiss National Park and Biosfera Val Müstair lie to the east. Stelvio National Park in Italy is also located to the southeast.

The peaks within Parc Ela are part of the Albula Alps, a subrange of the larger Western Rhaetian Alps that extend into both Italy and Austria.

The Alps, which run throughout the canton of Grisons and southwestern Europe, began forming during the Alpine orogeny around 65 million years ago. This major mountain building period also formed the Pyrenees, Himalaya, Karakoram, Caucus, Atlas, Carpathians, and the Hindu Kush.

The Tethys Ocean once lay between present day Africa and Europe. As the tectonic plates that underlie both continents began to move toward one another, the ocean retreated, leaving behind the sediments from the seafloor. When the two tectonic plates collided, the immense pressure caused recumbent folds, forcing the Alps upwards.

Over the course of millions of years, the peaks in the park continued to grow, transforming the seafloor into the rugged terrain visible throughout the region today. Sandstone and limestone are the dominant rocks within the park. These rocks are susceptible to the erosive forces that have helped create the distinctive jagged appearance of the Alps that’s visible today.

During the last glacial maximum, a majority of the Alps were heavily glaciated. Overtime, glacial retreat further carved out the sweeping valleys found throughout the park.

Parc Ela is home to a wide variety of both flora and fauna. The forested hillsides of the valley feature populations of mountain pine, larch, and Norway spruce.

Alpine fields provide the ideal habitat for wildflowers such as orchid, alpine aster, ragwork, and primrose. The alpine terrain in the park features various grasses and minimal amounts of other vegetation.

Although the park covers just over one percent of Switzerland’s total land area, it is home to a third of all the known insects in the country. Over two hundred species of bees and 135 species of butterflies have been identified within the park.

The ibex is one of the most common mammal species found within the park. Visitors to the region can also often spot chamois and red deer throughout the terrain.

Alpine terrain in the region provides the ideal habitat for marmot, mountain hare, and snow vole. Common birds include bearded vulture and golden eagle, along with various species of songbirds.

Humans have inhabited the land surrounding Parc Ela for thousands of years. Settlement of the region dates back to the people of the Pfyn culture, which existed between about 3900 and 3500 BCE. The city of Chur lies just north of the park and is one of the country’s oldest known settlements.

Both Bronze and Iron Age settlements have been found within the region. These settlements date back between 1300 BCE and the third century BCE. The Roman Empire would later conquer the region and rule over it until its fall during the fourth century CE.

Various groups ruled over the region in the centuries that followed. Some of the most notable groups include the Ostrogoths, Franks, and Magyars. Alpine transit routes began developing further during the tenth century, bringing more people to the region of Chur.

Many of the mountain passes in the park have been used by humans for thousands of years as travel corridors to present day Italy. In 1803, following the Napoleonic War, the Three Leagues founded the canton of Grisons, with Chur as the capital.

Parc Ela was established in 2006 and is one of four protected areas in the canton alongside Beverin Nature Park, Swiss National Park, and UNESCO Biosfera Val Müstair.

Parc Ela is home to numerous trails for hiking and outdoor recreation. Here are some of the most popular trails in the region:

The Lantsch Lenz - Vasternos loop trail is one of the most popular routes in the park. This loop trail is 8 km (5 mi) long and has 384 m (1,259 ft) of elevation gain. The route takes hikers through the forested hillsides that tower above sweeping valley floors.

Along the trail, hikers can enjoy open views of the valley and walk along a suspension bridge known as Val Meltger Runde. The trail passes over a nearly dried stream by Runcalatsch, before returning to its starting point.

The Alp Flix Loop travels through a high-alpine moor landscape that offers views of the vast open meadows and rugged snow capped peaks of Grisons. The route is 6.4 km (4 mi) long and has 216 m (708 feet) of elevation gain.

During the summer months, wildflowers line the alpine route, while the autumn months see the region transform into lush fall colors. The Alp Flix is a plateau situated at about 2,000 m (6,562 ft).

This point-to-point route takes hikers over the historic pass once used by Romans during the Middle Ages. The trail is 13 km (8 miles) long and it has 906 m (2,972 ft) of elevation gain. The path passes along the Lunghinsee before descending to Maloya on the shores of Lake Sills.

The alpine terrain on this trail provides panoramic views of the park and surrounding mountains. This trail travels next to Piz Lunghin, whose triple watershed sends water to the North Sea, Adriatic Sea, and Black Sea.

Looking for a place to stay near Parc Ela? Here are some of the best cities and villages to check out in the region:

Savognin is a village situated near the center of Parc Ela with a population of about 1,000 people. The village lies within the Gelgia valley, and it acts as a gateway to much of the region. The Val Surses Savognin Bivio region is a renowned hiking destination during the summer months.

The summer months offer visitors 1,000 km (621 miles) of hiking trails through the nation’s biggest nature park. During the winter, the village comes alive thanks to its nearby ski resort, Savognin. The vast amounts of biodiversity of the greater Savognin region can be seen throughout the year, especially at higher elevations.

Chur lies just to the northwest of Parc Ela in the Grisonian Rhine Valley. Known for being one of the oldest cities in the country, Chur is home to 36,000 people. Both the Bernina Express and Glacier Express trains pass through the mountainous town.

There are numerous tourist sites throughout the city, including the Grisonian Art Museum, Church of St. Martin, Bündner History Museum, and Cathedral of the Assumption. The old town district of the city is full of narrow alleys that are well worth checking out. 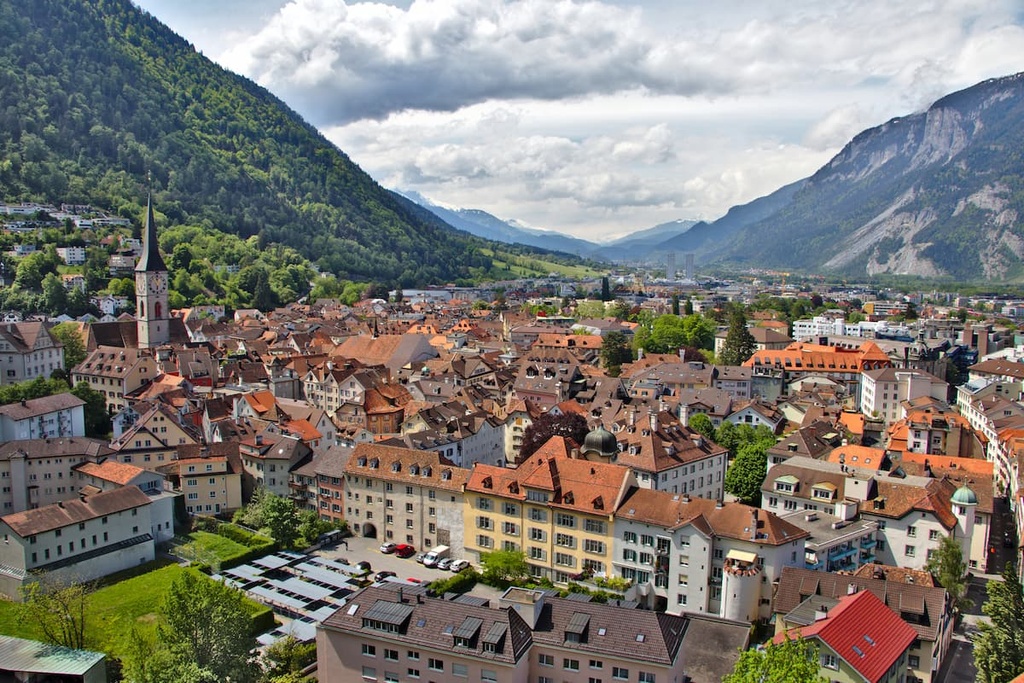 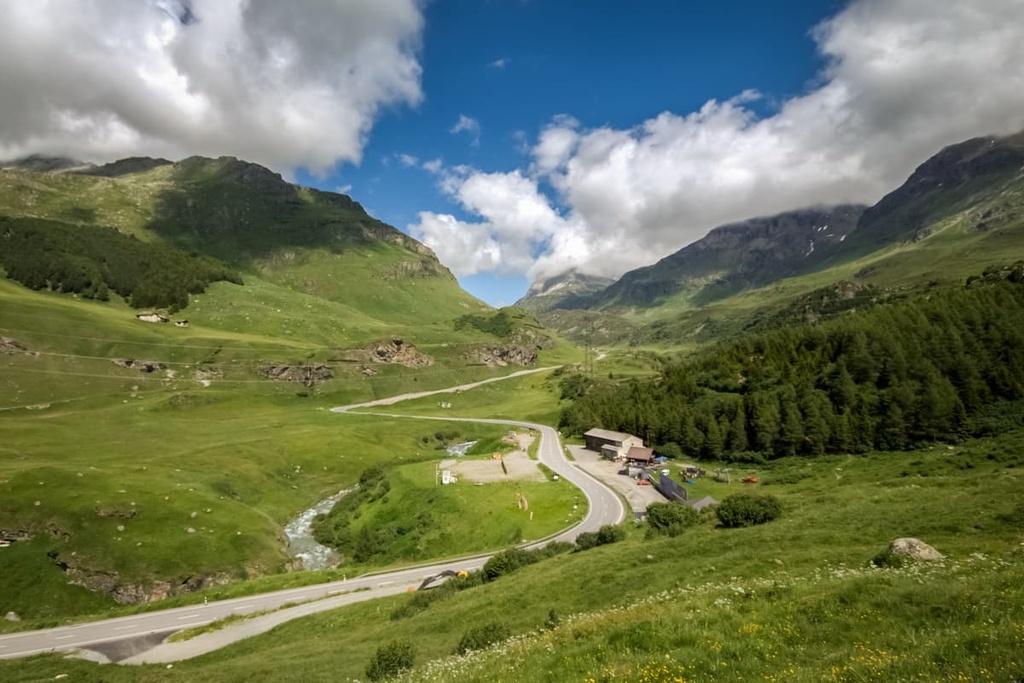 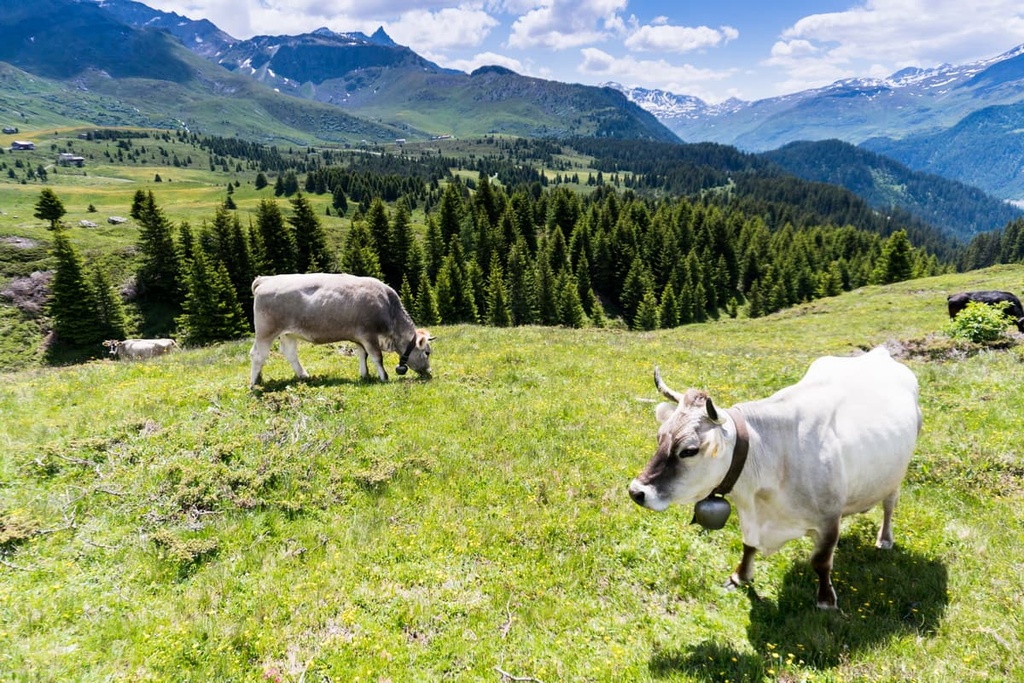 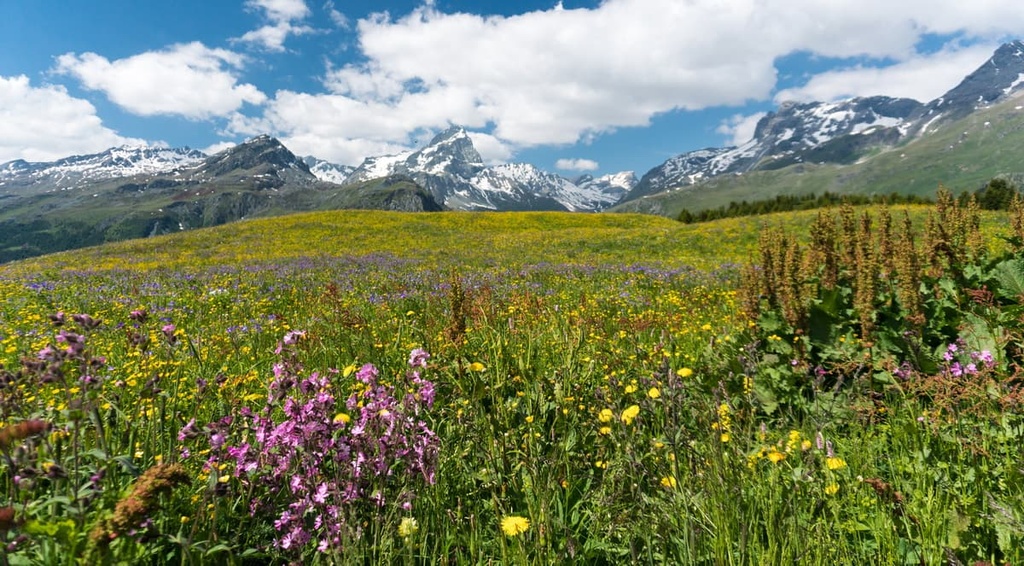 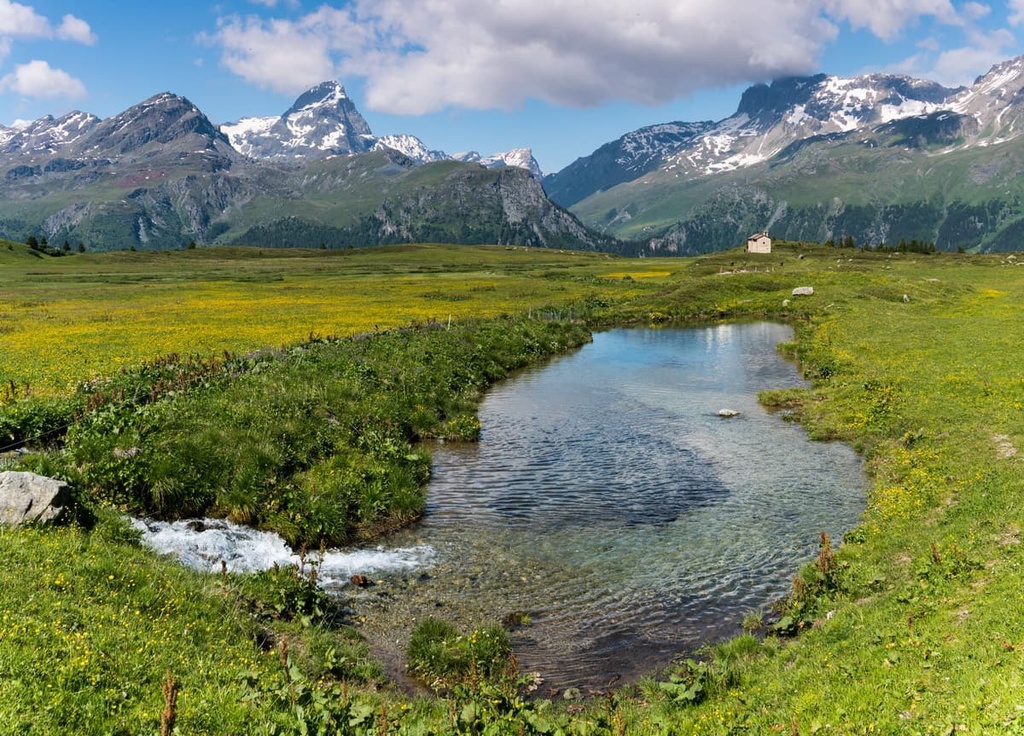 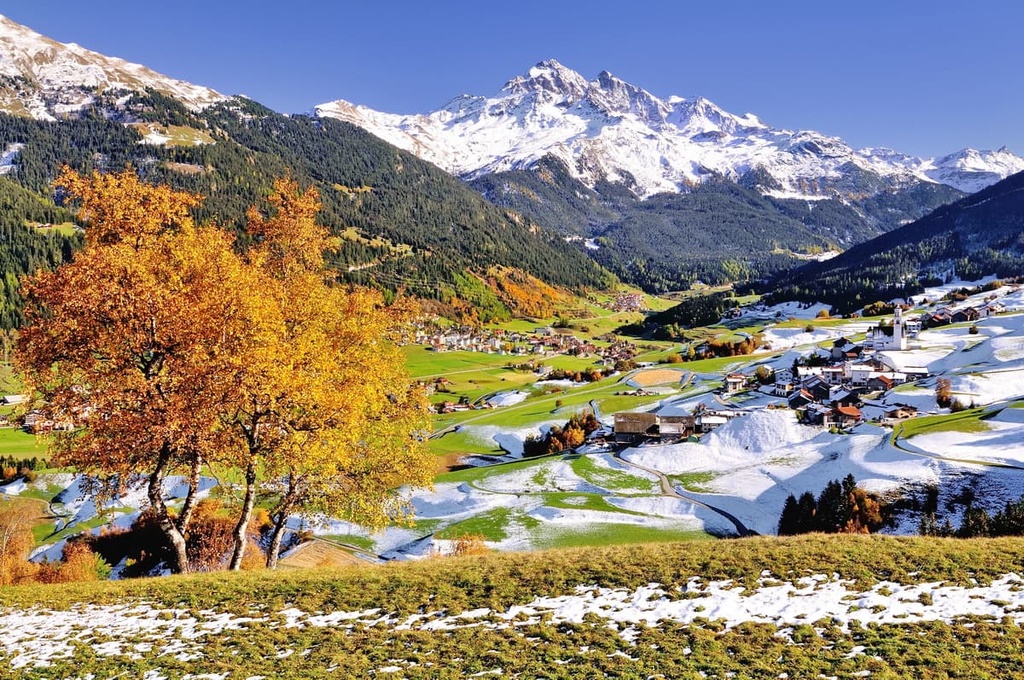 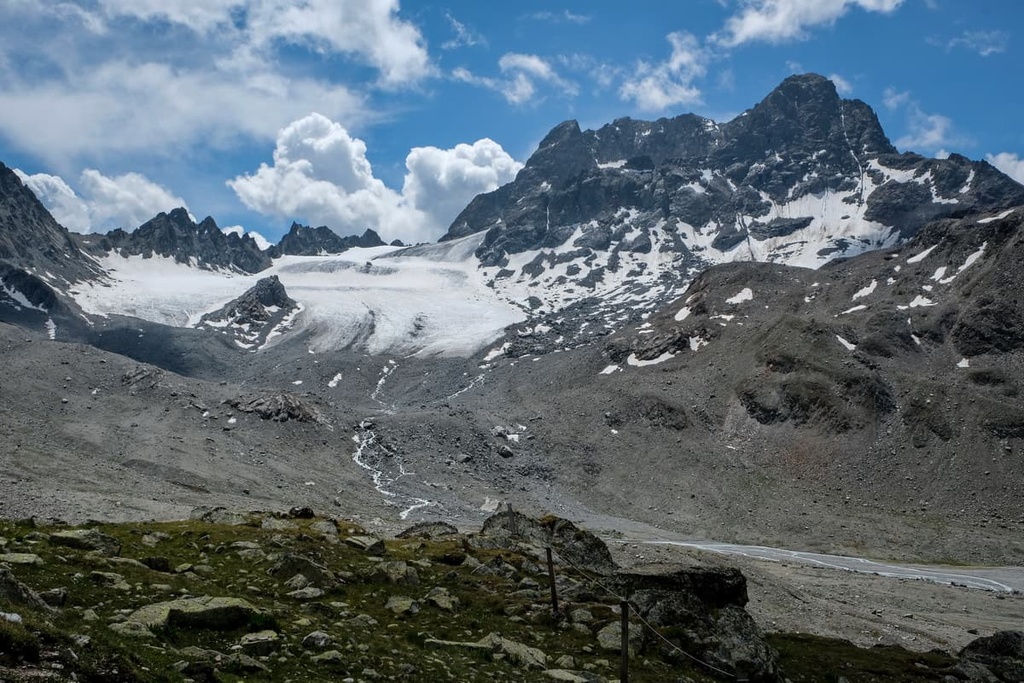