Biosfera Val Müstair is a nature reserve situated in the canton of Grisons of Switzerland. The reserve lies within a mountainous valley in the Alps along the country’s southeastern border. The tallest peak in the reserve is Piz Murtaröl at 3,180 m (10,433 ft) and the most prominent peak is Piz Tavrü with 861 m (2,825 ft) of prominence. 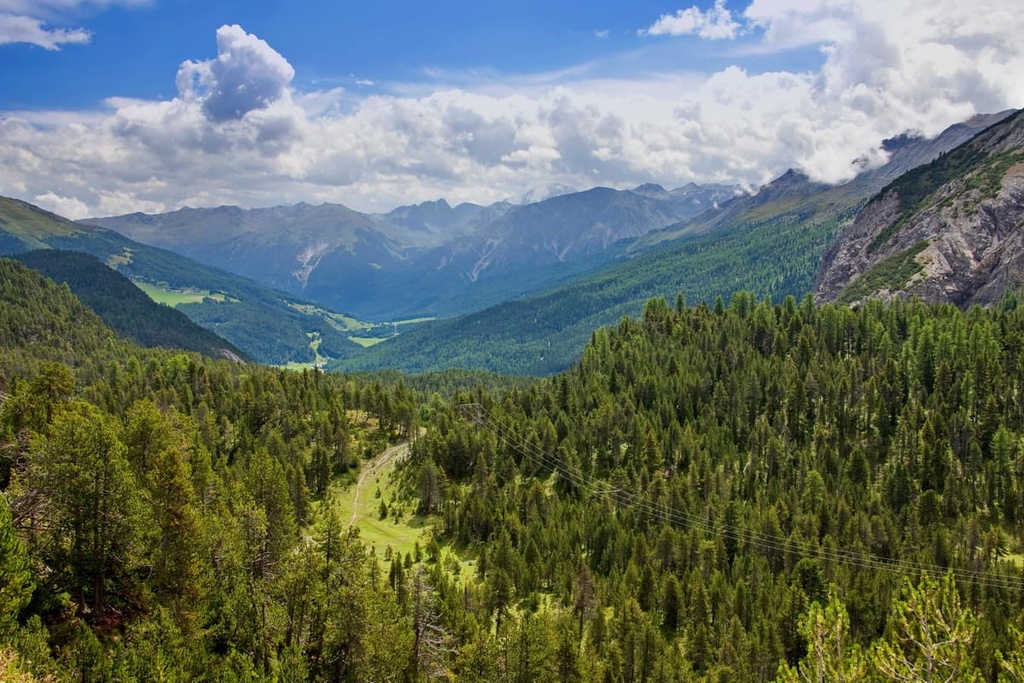 Biosfera Val Müstair lies in southeastern Switzerland, along the country’s border with Italy. The biosphere spans 199 sq. km (77 sq. miles) and is home to around 1,400 people.

The nature reserve is located within a mountainous valley near Furon Pass. The rugged Alps tower above on either side of the valley. Lower elevations in the reserve are full of lush green meadows and small towns, interspersed with densely forested patches.

The Rom River, a tributary of the Adige, runs through the valley passing through many of the region’s villages. The well maintained landscape of the nature reserve provides a sharp contrast to nearby untamed and wild terrain of Swiss National Park.

A majority of the foothills in the park are covered by dense patches of forest, which lead up into the alpine terrain. Jagged snow-capped peaks define the skyline of mountains that tower high above the treeline. Meanwhile, many of the cleared fields at the floor of the valley are used for farming purposes.

Biosfera Val Müstair is full of a variety of landscapes, including areas of developed land that contrast startly with the wild terrain that towers high above the valley. Approximately 55 percent of the region is covered by mountains, rivers, and glaciers.

The Engadine Valley lies within the reserve and the Inn River (En River) that flows through it is the only river in the country that drains into the Danube River.

The reserve, along with the adjacent ​​Swiss National Park, was the first UNESCO high alpine biosphere reserve in the country. Biosfera Val Müstair is also home to the Convent of St. John UNESCO World Heritage Site and the Manufactura Tessanda weaving mill.

The two ranges are separated by Ofen Pass, which lies within Val Müstair. Together these two ranges cover land across both the Central Eastern Alps and the Southern Limestone Alps.

These peaks, along with the rest of the Alps, began forming around 65 million years ago. The Alpine orogeny was a mountain building period that formed the Alps as well as the Pyrenees, Himalaya, Karakoram, Caucus, Atlas, Carpathians, and the Hindu Kush.

To the southwest of the range, in between present day Africa and Europe, once lay the Tethys Ocean. As the tectonic plates that surrounded the Tethys began to move toward one another, the ocean began to shrink, leaving behind only the sediment from the ocean floor.

As the two plates collided with one another, recumbent folds caused by the extreme pressure began forming the Alps. What was once the seafloor was transformed into a rugged mountain range over the course of millions of years.

The peaks within Biosfera Val Müstair consist of limestone and sandstone, two easily erodible rocks that over time have given the range its jagged appearance.

A majority of the Alps were heavily glaciated during the last glacial maximum. Following this period, glacial retreat carved out the various valleys and peaks even further, leaving behind the sweeping valley found within the biosphere reserve today.

Despite the development throughout the region, Biosfera Val Müstair is home to a variety of both flora and fauna. The cleared off valley floor is primarily used for farming purposes, with over 80 percent of the valley implementing organic farming practices.

The forested foothills in the reserve contain dense patches of mountain pine, larch, and Norway spruce. At higher elevations, hikers can spot scree fields along with fields of alpine grasses.

Higher elevations in the biosphere are also home to a variety of wildflowers. Common species include Swiss androsace, vanilla orchid, alpine aster, edelweiss, fairy thimble bellflower, among various others.

Large populations of animals are not as common in Biosfera Val Müstair as in nearby Swiss National Park. Animals who enter the region often stay in the forested hillsides or above the treeline to avoid the various villages.

Common animal species in the region include chamois, red deer, ibex, marmot, mountain hare, fox, lynx, and the occasional brown bear. The bearded vulture, golden eagle, and ptarmigan are all bird species that you can see in the reserve, too.

Humans have inhabited the Val Müstair region for thousands of years. The alpine valleys are thought to have been originally settled by the Raetains around 3500 BCE.

The land in the biosphere, along with much of present day Grisons, was once part of the Roman province known as Raetia. This province was established around 15 BCE.

After the fall of the Roman Empire, humans continued to inhabit the region and establish larger settlements. The Abbey of Saint John, which lies within Biosfera Val Müstair, was established in 780 CE. It is believed the abbey was built by a Bishop of Chur, during a wave of monastery construction.

Situated along Val Müstair, the abbey marked the pass over the Alps into present day Italy. The abbey was later expanded and painted during the eleventh and twelfth centuries CE.

Biosfera Val Müstair became a UNESCO Biosphere in 2010. It was designated as a Nature Park in 2011.

Biosfera Val Müstair is home to numerous trails for hiking and outdoor recreation. Here are some of the most popular trails in the reserve:

The first stage of this multi-day Jakobsweg Grisons trek begins in Müstair and travels to Lü. The route is 16 km (10 miles) long and has 800 m (2,625 ft) of ascent. The trail is often completed in around 5 hours.

The path winds gently through the valley along lush green pastures. On either side of the route lies the steep forested foothills that lead up to the region’s jagged snow capped peaks.

Maria Val Müstair - Tschierv trail travels along the Rom River. This point-to-point trail is 10 km (6.2 miles) long and has 438 m (1,437 ft) of ascent. Most people can complete this hike in around 3 hours.

Hikers can experience the beauty of Rom, which flows throughout the year and ranges from a gentle stream to a fast-flowing river. Panoramic views of the valley can be seen throughout this hike. There’s also a bus that can take hikers back to the starting point once you reach the trail’s terminus.

This route offers scenic views of the valley. It can also be extended to reach the summit of Piz Chavalatsch, which is located along the border with Italy.

Looking for a place to stay near Biosfera Val Müstair? Here are some of the best cities and villages to check out in the region:

Val Müstair, for which the biosphere was named, is located in the easternmost region of Switzerland, next to the Italian border. The small community is home to around 1,400 residents and it is situated along Fuorn Pass.

Besides exploring the nearby hiking trails, tourists in Val Müstair can also visit the Benedictine Convent of Saint John and the Alpine Astrovillage Lü-Stailas public observatory.

The village of Zernez lies just northwest of the Biosfera Val Müstair. The city also acts as a gateway to Swiss National Park, which is the country’s biggest nature preserve.

The holiday resort town of Zernez is a great starting point for exploring Engadine as well as the region around the borders of Switzerland, Italy, and Austria. Zernez has a population of 1,500 but is often full of both local and international tourists.

The visitor center for Swiss National Park lies within Zernez, and many hiking trails lead right from the village. Other notable sites in the village include four Swiss Heritage Sites of National Significance and Nationalparkhaus, a museum for the national park. 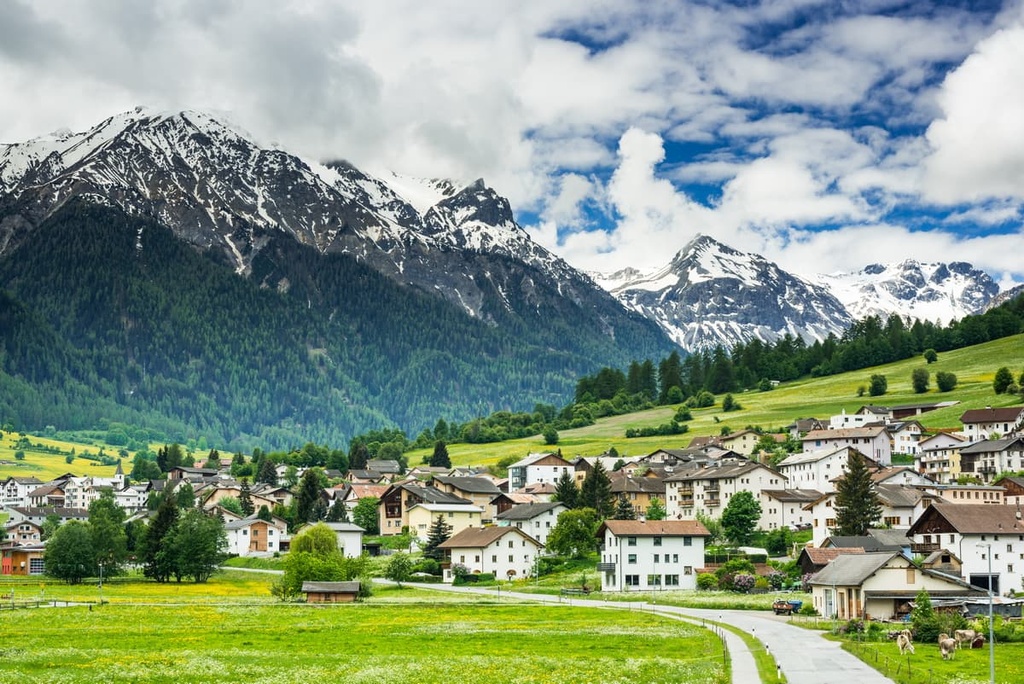 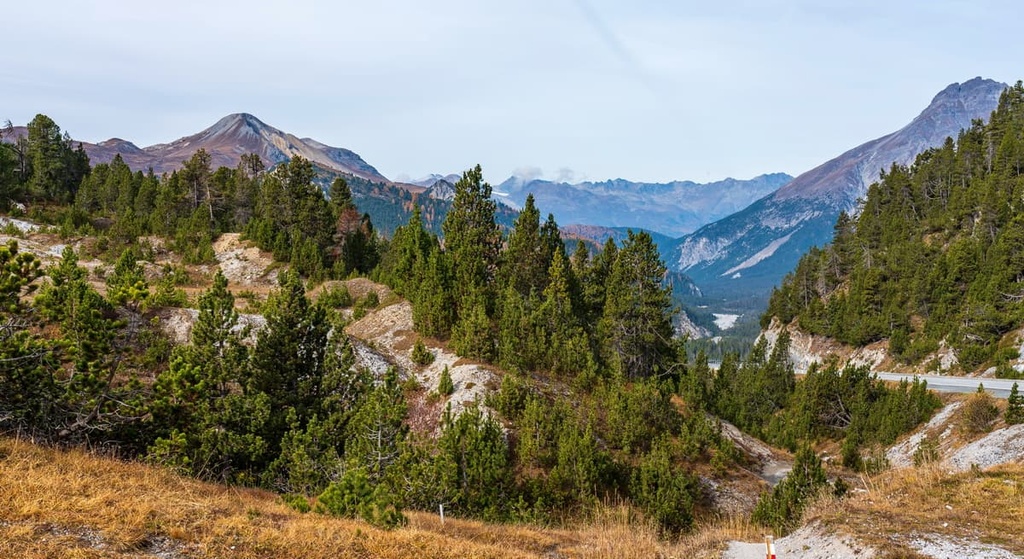 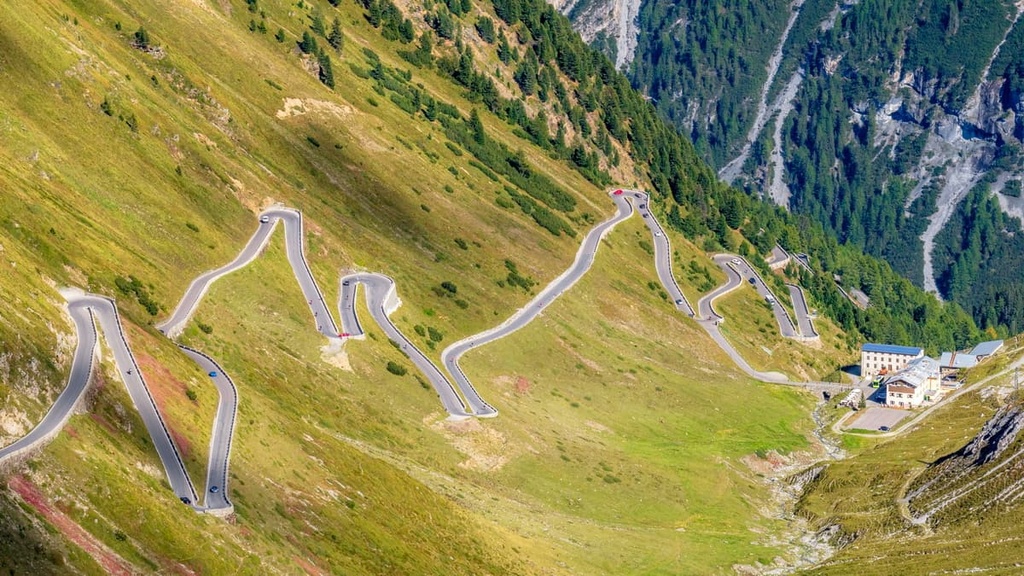 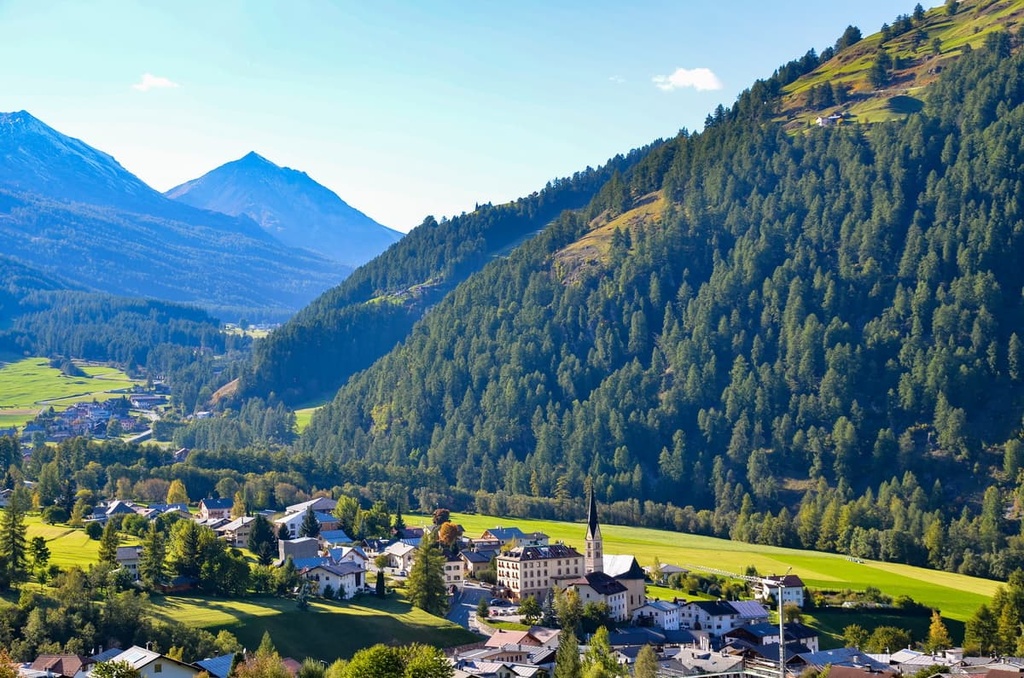 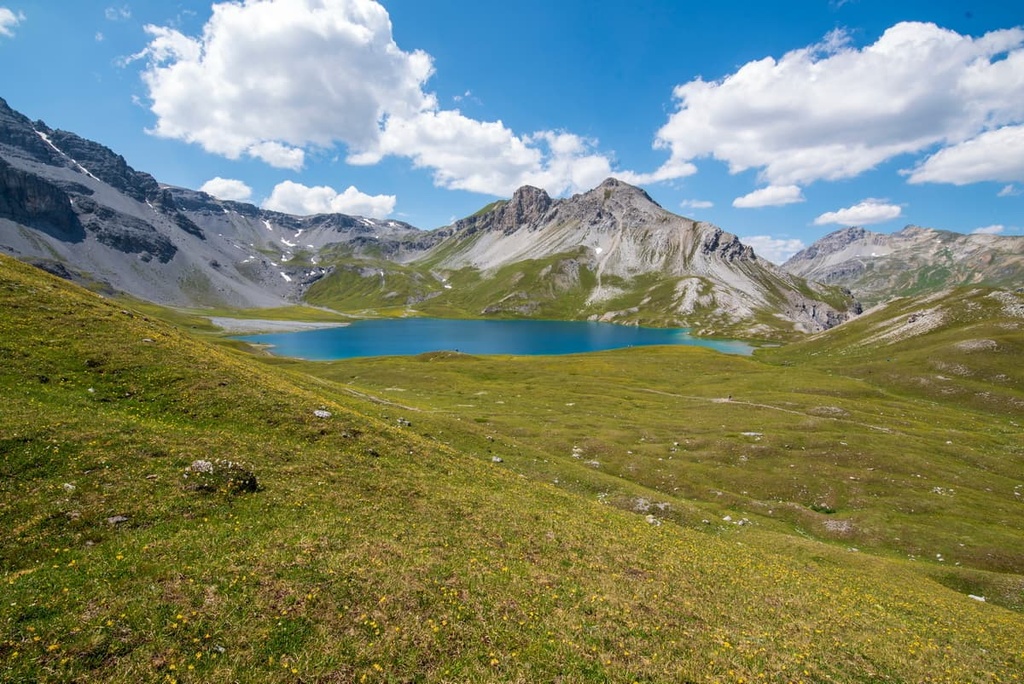