Binntal Nature Park is a mountainous park situated in the Binn Valley of southwestern Switzerland in the canton of Valais. Tucked within the heart of the Alps, the park is known for its vast mineral resources and stunning alpine terrain. There are 78 named peaks in the park. The tallest of which is Helsenhorn at 3,273 m (10,735 ft) in elevation and the most prominent of which is Monte Cervandone with 700 m (2,297 ft) of prominence. 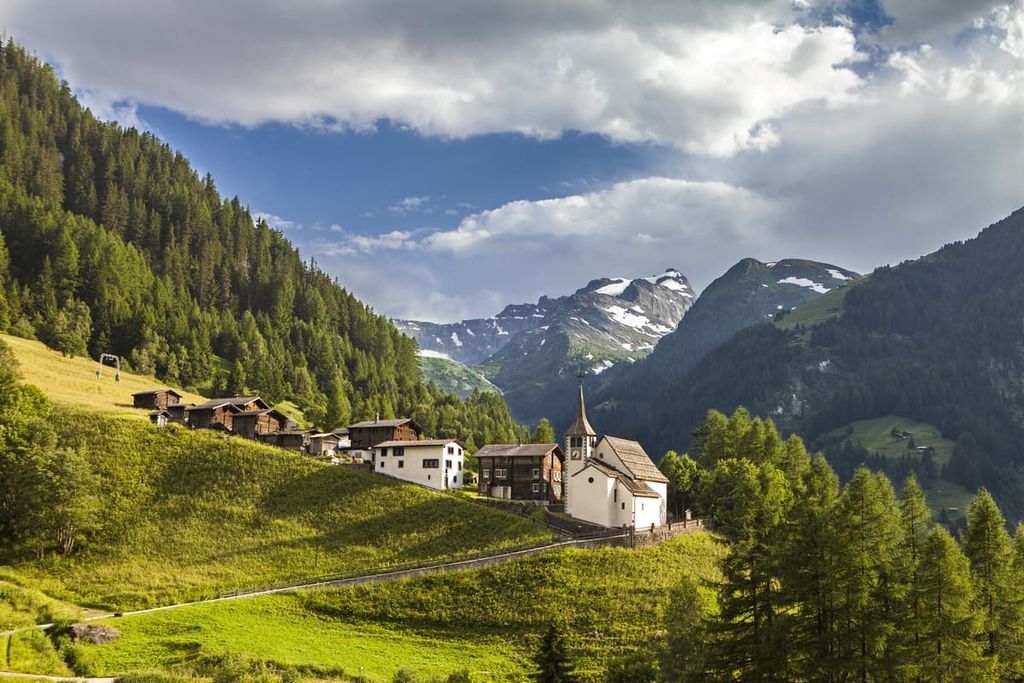 Binntal Nature Park (Landschaftspark Binntal) is situated in the canton of Valais in southwestern Switzerland. The river Rhone forms much of the park’s northern boundary.

The park lies within the Lepontine Alps subrange of the European Alps, and it is home to two distinct landscapes. The northern part of the park is marked by gentle rolling mountains that give way to the valley of the river Rhone. Lower elevations in the region are marked by vast pastures and sections of alpine grasses.

Mountains on the southern side of the valley are far steeper than those on the northern side, with sheer rock faces giving way to large rock slides. Densely forested patches of land are intermixed with vast fields of wildflowers throughout the park.

Alpine summits mark the southern boundary of the park, which also acts as Switzerland’s border with Italy’s Piedmont region. Hiking and snowshoeing trails can be found throughout the park, allowing for access all year round.

Small towns are found throughout the park. This includes the municipality of Binn, which is located at an elevation of about 1,400 m (4,600 ft) and is home to the famed Lengenbach Quarry. Many of the towns are found along the River Rhone as the snow capped peaks tower above the landscape to the south.

The landscape within Binntal Nature Park shares a geological history that’s deeply intertwined with the Alps. The valley forms a geological boundary between its northern and southern sections, apparent in the types of rock found on either side.

The Alps began forming during the Late Cretaceous and Tertiary periods with the collision of the African and European tectonic plates, among others. This collison slowly led to the rise of the peaks that we see today.

Immense pressure between these various tectonic plates led to the formation of recumbent folds. Over time these folds pushed over one another, creating layers that later became thrust faults.

Furthermore, the Binntal Nature Park is famous for its plethora of minerals. The minerals in the park are buried within the many layers of rock. While over 300 different minerals have been found throughout the valley, some of the most notable include clear rock quartz and smoky quartz.

The Lengenbach Quarry has helped uncover and extract hundreds of minerals in the area. Located on a side valley near the quarry, lies a 300 m (984 ft) thick slab of white dolomite marble. There are also large amounts of fool’s gold and realgar in the region.

The steep landscape of the park has resulted in minimal human interaction with the land. This lack of infrastructure has allowed species of both flora and fauna to thrive.

The vast fields in the region are home to a variety of flowers. Common species include the St. Bernard’s lily, turk’s cap lily, primrose, astragalus, and Grengjer tulip.

Because habits in the park extend from the fertile river valley, up to the summit of the snow capped Alps, there is a wide range of fauna in the region.

One of the most common species is the red deer, though their population is becoming too high for the ecosystem to support. Other common animals include the chamois, wolves, common redstart, crag martin, rock ptarmigan, and the green lizard.

The park is also home to a variety of other species such as the amber snail, Escher’s blue butterfly, Apollo butterfly, and numerous types of grasshoppers.

Though human history within the park boundaries is limited, the nearby city of Sion dates back to 6200 BCE. Here humans lived along the River Rhone for thousands of years. From around 5800 BCE to 4500 BCE, it is believed that Mediterranean farmers settled in the fertile region. Burial sites have been found near the city dating back to this time period.

Sion was the capital of the Seduni people who were one of the four major tribes in present day Valais around the first century BCE.

The Romans conquered the region around 7-10 CE. Populations continued to grow in the region until the thirteenth century. The region was war torn during the fourteenth and fifteenth centuries with many historic settlements being destroyed or badly damaged.

The city of Brig-Glis (more commonly, Brig) is located just to the west of the park and was first mentioned in written texts 1215 CE, though evidence of human populations dates back to the Bronze Age. Situated along the valley floor, the settlement of Brig grew as new Roman roads began to pass through it.

The Brig town hall was constructed in the seventeenth century and was used as a flood wall in the case of extreme weather. In the nineteenth century Napoleon built a road along the Simplon Pass which lies just outside of the city limits. The pass marked the first man-made road through the rugged Alps.

The central region within the park has been protected since 1964, a measure taken by local communities. Later on in 2002, the towns of Binn, Grengiols, and Ernen worked together to establish Binntal Nature Park.

In 2011, other nearby villages worked to expand the protected area. The park thus became the first regional nature park within the canton of Valais.

Binntal Nature Park is home to numerous trails for hiking and mountain biking. Here are some of the most popular trails and regions in the park:

Starting in the town of Furgge this trail leads to the summit of Bättlihorn before circling around the base and returning to the town. The trail often takes around 4-5 hours to complete.

The final ascent to the summit is steep but once at the top hikers are rewarded with panoramic views of the park, and the Alps spanning as far as the eye can see. The trail is exposed with grassy hillsides interspersed with steep rock faces.

One of the most beautiful hikes in the park is the Binn - Schaplersee trail. Starting in the town of Binn, the trail climbs up to Kaffeestafel with views spanning out to Aletsch and Binntaler Breithorn.

Views along the trail open up at the Hockbode plateau before climbing further up to Schaplersee. The clear alpine waters are situated in a basin with both Stockhorn and Hirli towering above. Alpine meadows, flowers, and grasses are found throughout. The trail is 7.8 km (4.8 miles) long.

Looking for a place to stay near Binntal Nature Park? Here are some of the best cities and villages to check out in the region:

Officially known as Brig-Gils, the city of Brig sits just west of the park boundaries. Situated in the Rhone valley, Brig has a population of around 14,000 residents. The city is home to Stockalper Palace, one of the most important baroque palaces in the country.

Brig’s close proximity to Simplon Pass has allowed it’s tourism to grow with more direct routes leading to Bern. Surrounded by hiking trails and ski resorts, Brig is an ideal place to stay for a true mountain town experience while being tucked away in the Swiss Alps.

Lausanne is also home to the world headquarters for the Olympics. As such, there is an Olympic Museum within the city. Other popular sites include the Cathedral of Notre-Dame, as well as Lake Geneva, and the numerous hiking trails that depart from the city. 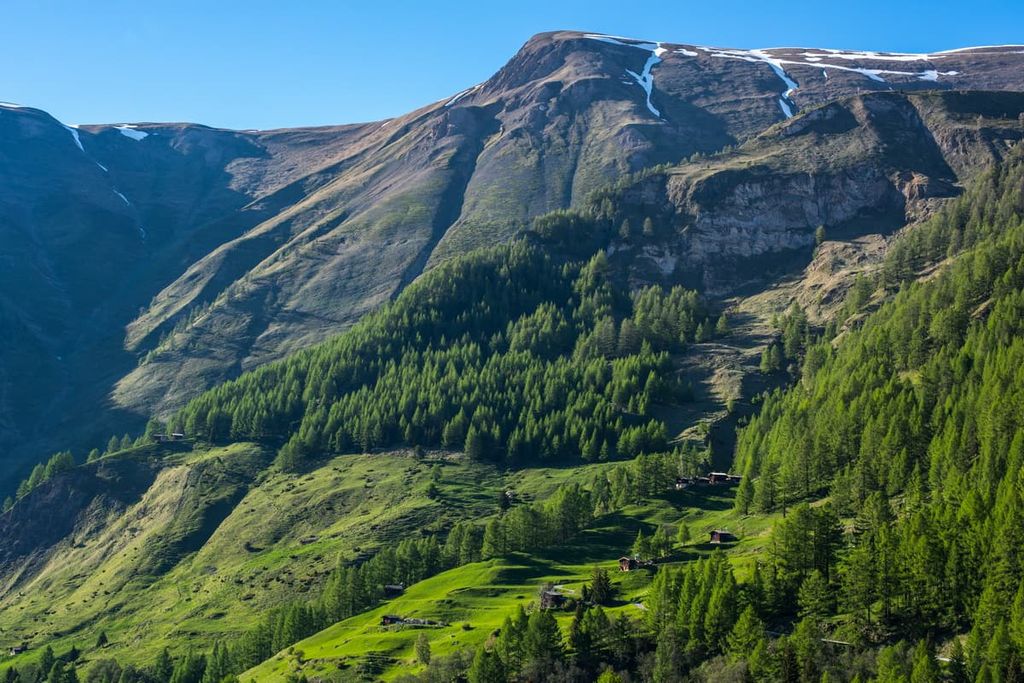 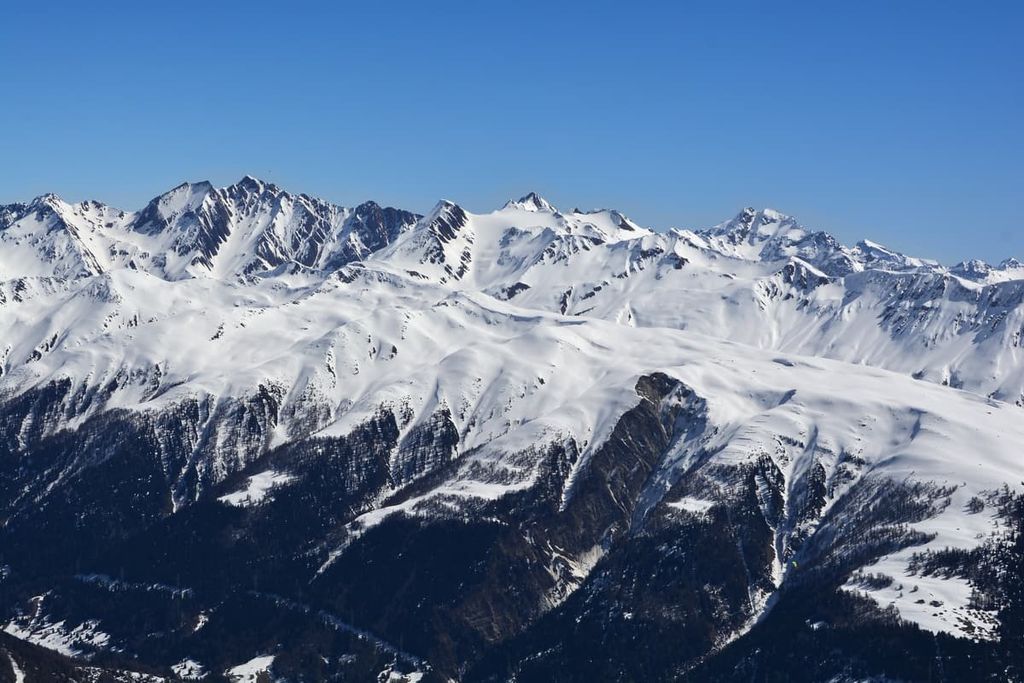 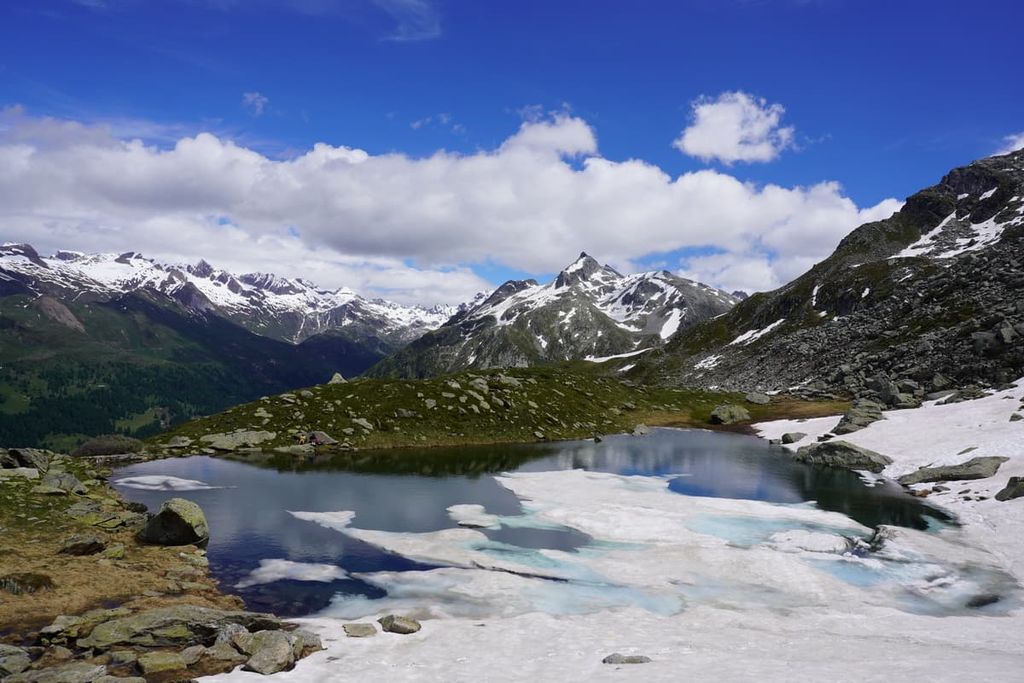 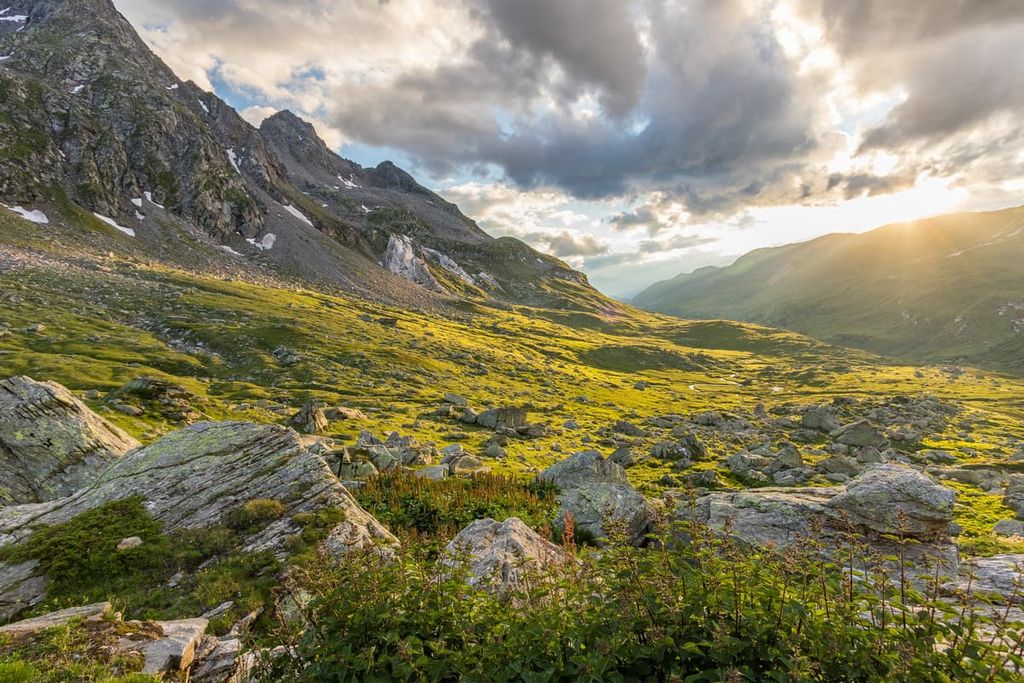 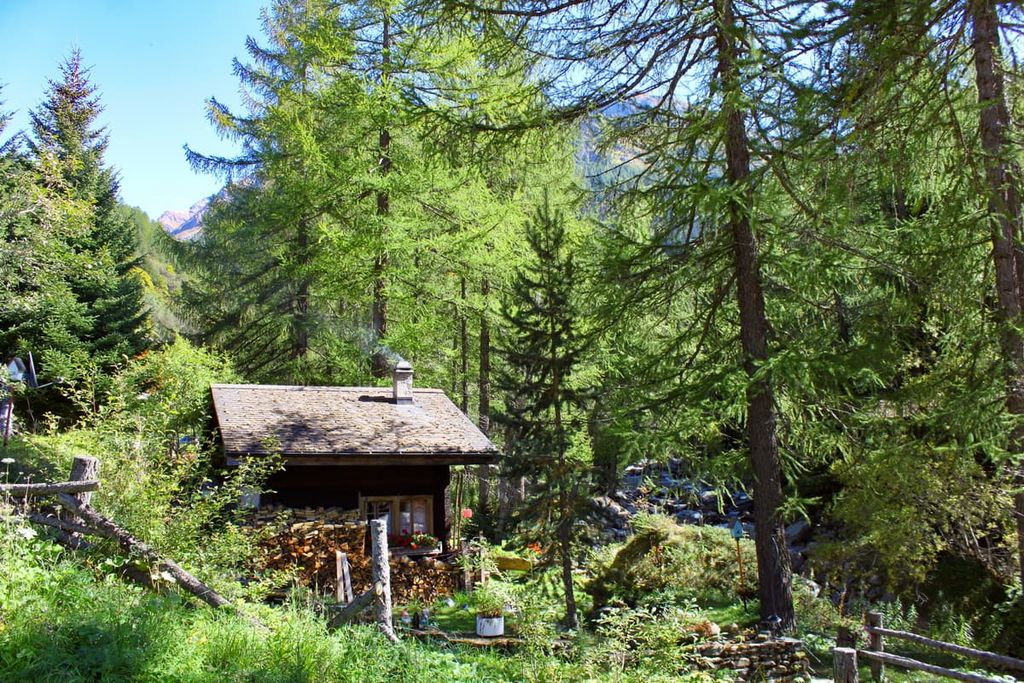 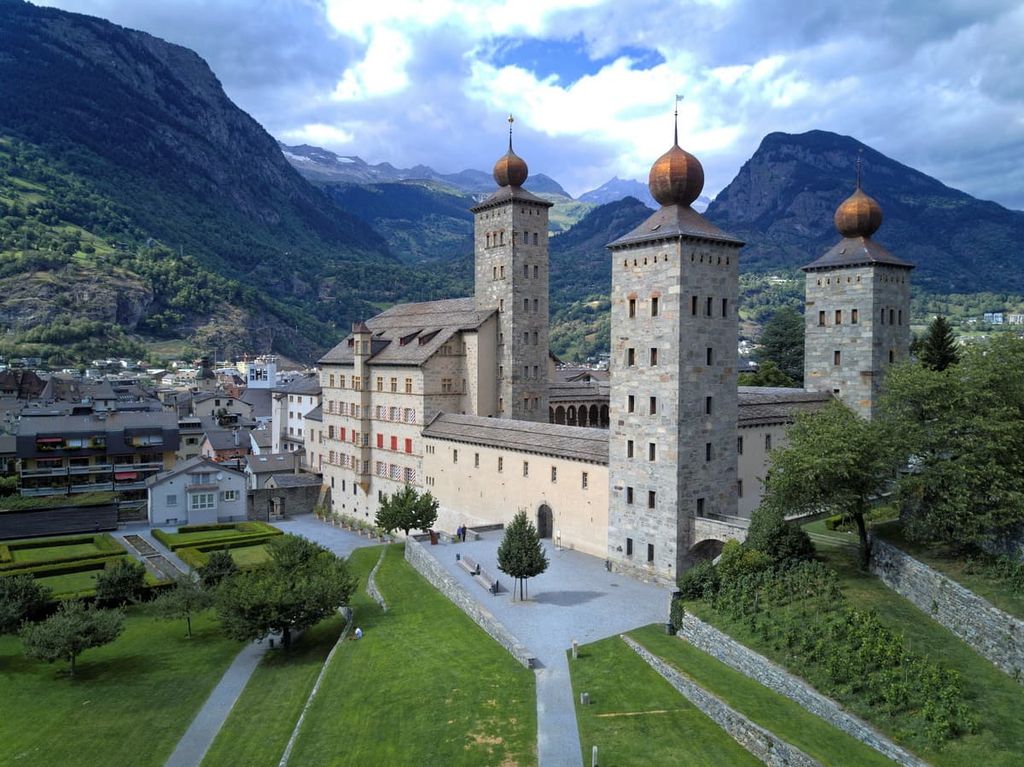