Gruyère Pays-d'Enhaut Regional Nature Park is a mountainous protected area located in the western part of Switzerland in the cantons of Fribourg and Vaud. Besides breathtaking mountain views, the park is also known for its tradition of alpine dairy farming. The tallest peak in the park is La Tarent at 2,548 m (8,360 ft) in elevation and the most prominent peak is Vanil Noir with 1,112 m (3,648 ft) of prominence. 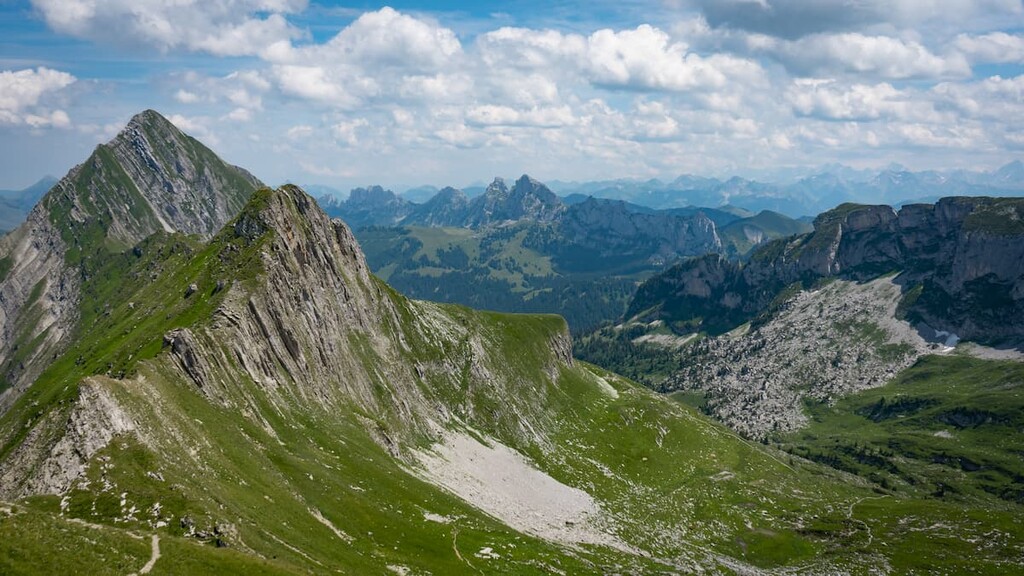 The park spans 518 sq. km (200 sq. miles) of land within the Prealps. The peaks in the park are part of the foothills of the Bernese Alps. Within the park, the landscape is marked by vast valleys along with forested sections.

Sheer cliffs and rock fields tower above the distinct alpine pastures that characterize the region of Gruyère Pays-d’Enhaut. This unique landscape has allowed for the Alpine cheese-making community to thrive within the park boundaries.

The Pierreuse Nature Reserve and valley of L'Etivaz are situated within the nature park. Small communities are scattered throughout the region, too, while higher elevations are marked by few patches of dense vegetation.

Gruyère Pays-d'Enhaut Regional Nature Park is situated between the Swiss Plateau and the Bernese Alps. The plateau began forming around 60 million years ago. Sea levels rose around 20 million years ago, causing the vast plateau to be covered in water.

During this time, mineral sediments were deposited along the seafloor. As the water retreated, around 15 million years ago, the country’s numerous lakes and rivers began forming.

While the Alps were formed due to the collision of the African and European tectonic plates, the distinct valleys in the region were further shaped by glacial retreat. During the last major glaciation, the park was covered by vast glaciers.

Over time, as the glaciers retreated, the alpine pastures and valleys that characterize the region today were formed. This formation left behind nutrient-dense soil, eventually leading to the rise of farming and agriculture throughout what is now Gruyère Pays-d’Enhaut Regional Nature Park.

Despite there being numerous small communities within the park boundaries, there is also a high degree of biodiversity. Besides the animals used in farming and agriculture, many animal species live within the forested patches of the park.

Common animals include chamois, beavers, snow hares, and weasels. Horseshoe bats can be found within the park along with the cranberry fritillary butterfly. The numerous streams and alpine lakes in the park provide the ideal habitat for many of these animals.

During the summer months, wildflowers can be spotted throughout the park. Popular species include the early purple orchid, cornflower, spotted deadnettle, Martagon lily, and the globeflower.

Situated along the western edge of the park lies Montreux, which is located on the shores of Lake Geneva. The earliest settlement near present day Montreux region dates back to the Late Bronze Age.

The settlement was once located along the Roman road for travelers heading to and from present day Italy. It is believed that a Roman villa was situated in the region dating from the second to the fourth centuries CE.

The twelfth century brought about the traditions of wine and cheese making. Western regions of the park along the shores of the lake provide the perfect sunny setting for growing grapes.

Simultaneously, communities at slightly higher elevations began creating the now-famous Gruyère cheese. Farmers found that their cattle were producing an excess amount of milk, which they would use to produce cheese.

Yet it wasn’t until the seventeenth century that the region became known for its cheese production. Following the Burgundian Wars, the region was occupied by the people of Bern until the end of the eighteenth century.

Tourism rose throughout the region during the nineteenth century as hotels began being built along the shores of Lake Geneva. Today the park and surrounding region is visited for its stunning landscape, hiking trails, and its agricultural history.

Gruyère Pays-d'Enhaut Regional Nature Park is home to numerous trails for hiking and trekking. Here are some of the most popular trails and regions in the park:

The Gorges De La Jogne In Gruyère trail is a short 3.9 km (2.4 mile) route with just 94 m (308 ft) of elevation gain. This route begins near the community of Broc before climbing gently into the park and reaching Lac de Montsalvens.

Bridges, streams, dams, and sweeping views line the short route, helping make it one of the most beautiful trails in the park. La Jogne runs next to the trail before it feeds into La Sarine.

The Dent de Jaman - Rochers de Naye hike is a loop trail that covers 12 km (7.4 miles) of distance with 772 m (2,532 ft) of elevation gain. The trail takes hikers through forested sections before reaching the alpine meadows of the region.

Once above the treeline, visitors are rewarded with views of Lake Geneva, Montreux, and Villeneuve. The steep hillsides frame the backdrop while single-track trails wind throughout.

The loop trail climbs steadily before getting above treeline. While you hike, Lake Geneva can be seen to the west while the Alps extend to the south and east. During warmer months, wildflowers bloom alongside the route.

This point-to-point trail begins in the city of Montreux. From there, the route extends to the northeast across the Swiss Alps. The entire route covers 348 km (216 miles) and 21,265 (69,767 ft) of elevation gain.

The first portion of this hike lies within Gruyère Pays-d'Enhaut Regional Nature Park. The route offers impeccable views of much of the park before passing through Gantrisch Nature Park. The hike can be completed in its entirety or in smaller sections.

Looking for a place to stay near Gruyère Pays-d'Enhaut Regional Nature Park? Here are some of the best cities and villages to check out in the region:

Situated just north of the park boundaries lies Gruyères (not to be confused with the commune of Gruyères in the Ardennes department of France). The medieval town is known for its production of cheese and scenic town center. In the town, cobblestones line the streets while the peaks of the park tower above to the south.

Besides the plethora of hiking trails and cheese tastings in the town, visitors also head to Gruyères Castle, the ramparts, or explore the Gastlosen. A chairlift allows people to skip the first major climb, allowing for a more accessible route.

The town of Monteux lies on the western border of the park. The resort town is situated along the shores of Lake Geneva, with the park located to the southeast. The town has a population of around 26,000 people.

Though the town is a popular spot for those wishing to explore the seemingly endless hiking trails, other popular attractions include Château de Chillon and the Montreux Jazz Festival. The town has long since been adored by artists, writers, and world travelers. 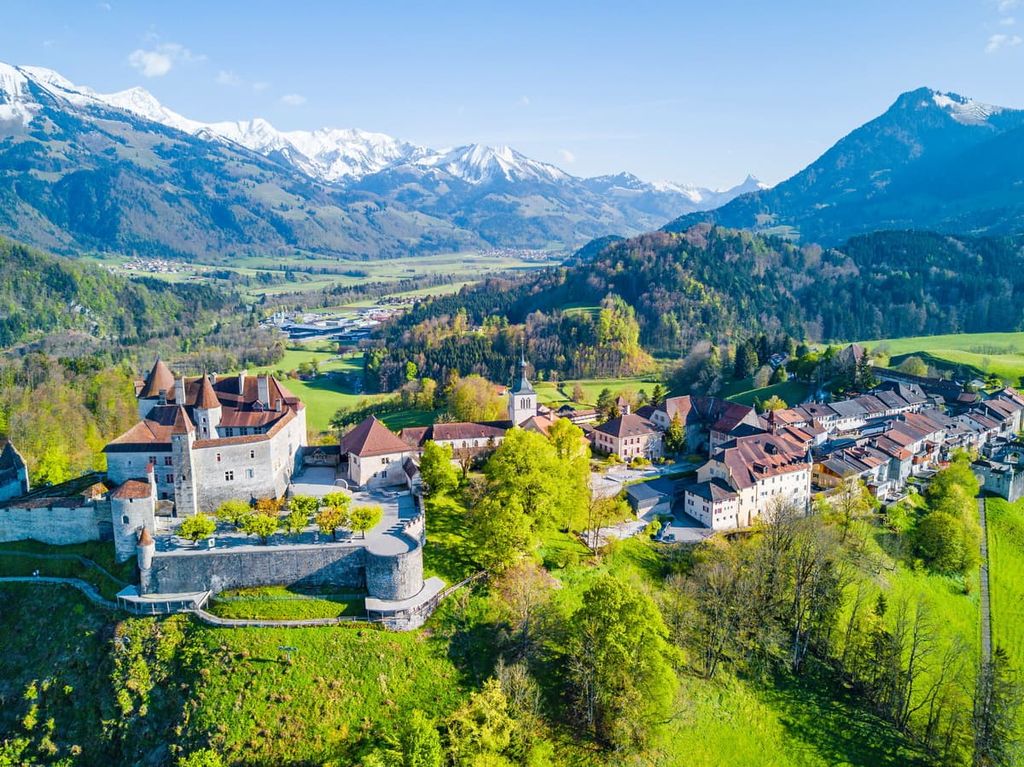 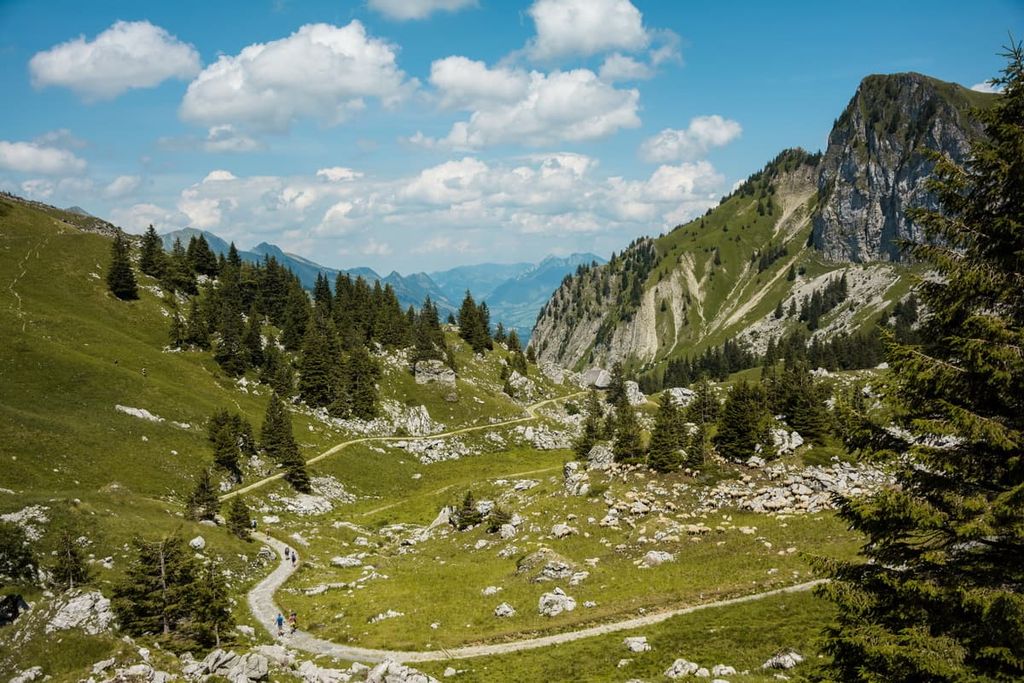 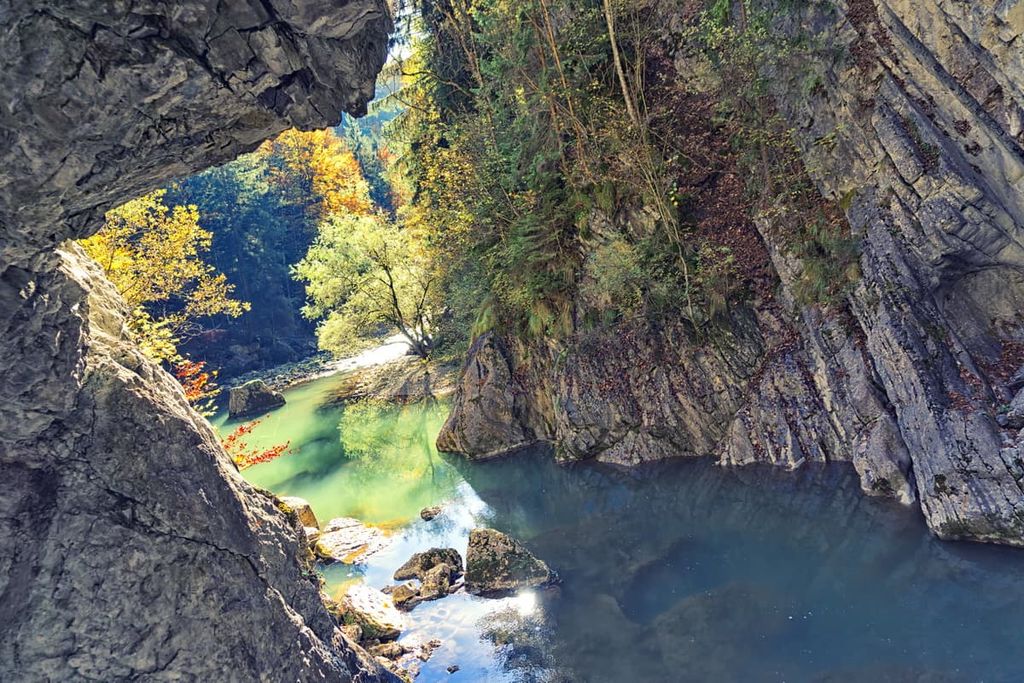 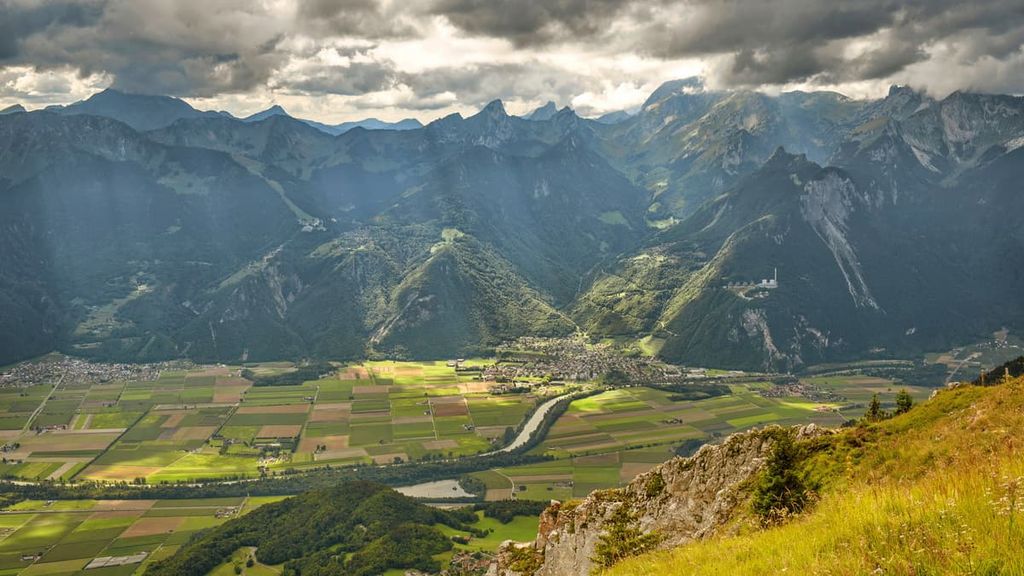 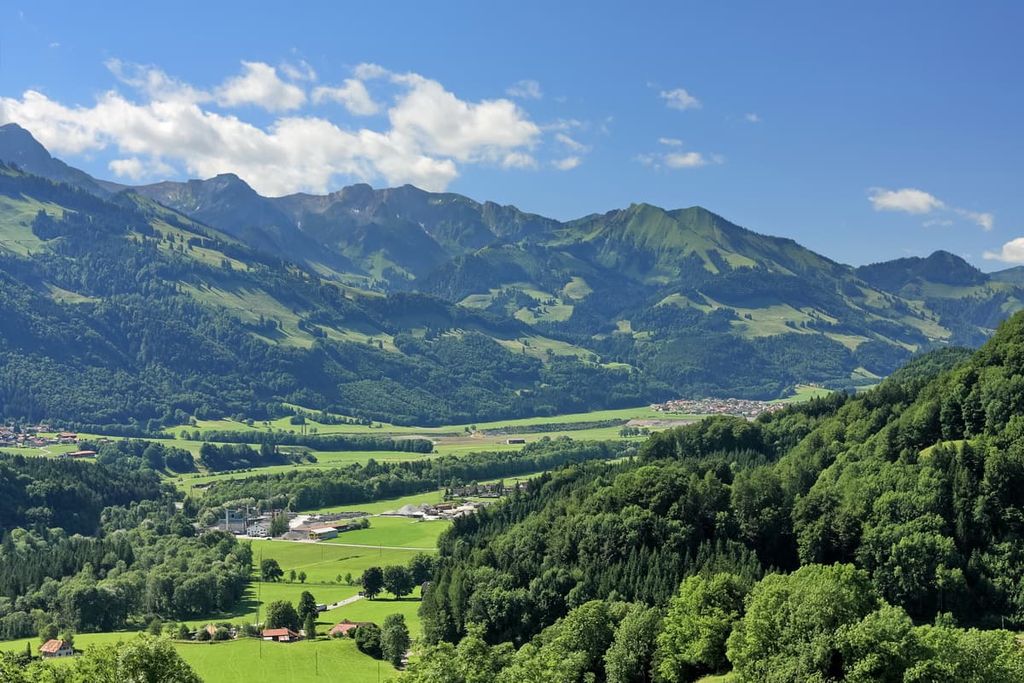 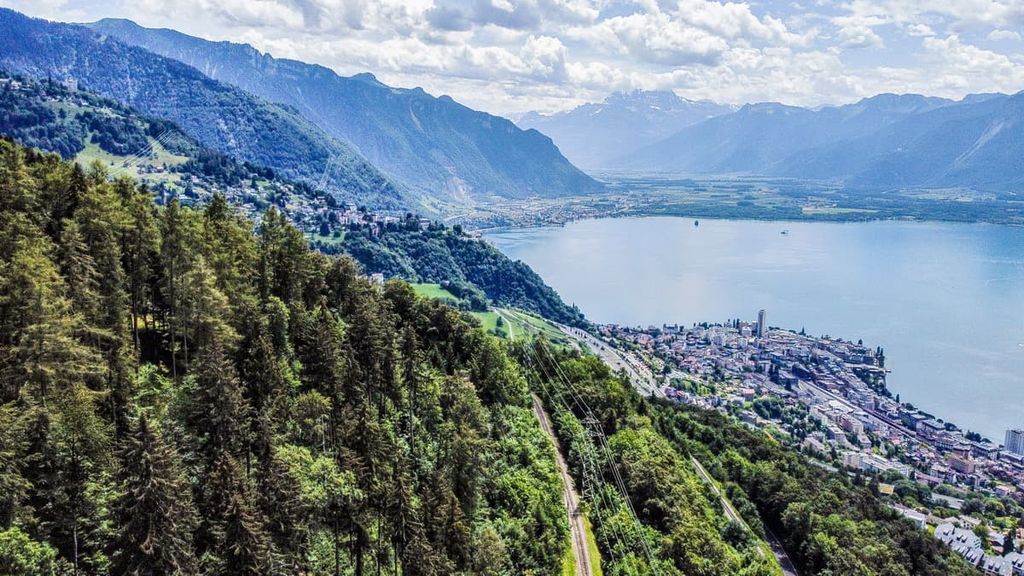