Diemtigtal Nature Park is a mountainous region located in the western part of Switzerland in the canton of Bern. Situated within the valley of the Simmental, the park is home to 51 named peaks. The tallest peak in the park is Männliflue at 2,652 m (8701 ft) in elevation and the most prominent is Hinderi Spillgerte with 456 m (1,496 ft) of prominence. 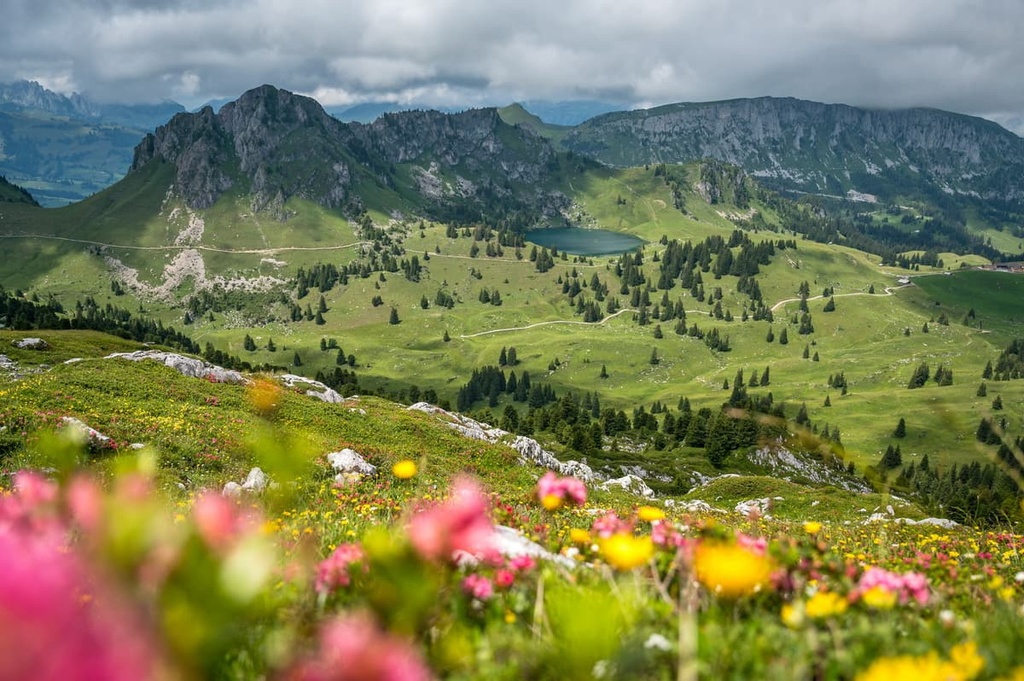 Diemtigtal Nature Park spans across the municipalities of Diemtigen and Zweisimmen in the Bernese Oberland of the Swiss canton of Bern. It contains 135.4 sq km (52 sq miles) of land in the Simmen Valley.

Diemtigtal spans 16 km (10 miles) long between the Niesen and Turnen mountains. The tallest peak within the park marks the southern end of the valley. The rugged mountains within Diemtigtal Nature Park are part of the Bernese Alps.

The valley floor in Diemtigtal rises steeply up to the peaks of the surrounding mountains. Visitors to the region can find vast alpine meadows, forests, streams, and alpine lakes, all surrounded by the peaks of the Bernese Alps.

Just to the north of the park lie both Brienz Lake and Thun Lake. The town of Interlaken is situated between the two lakes.

The alpine terrain of the nature park is also home to 140 alpine farms that are mainly used to raise livestock. The rolling fields in the park are coupled with dense forests while a majority of the peaks are quite rocky and barren.

Additionally, Diemtigtal Nature Park is located near a number of other parks in the western part of Switzerland. In particular, Gruyère Pays-d'Enhaut Regional Nature Park lies to the southwest of the park, UNESCO Biosphere Entlebuch is situated to the east, and Gantrisch, Chasseral, Doubs, and Thal Nature Parks are all located to the north.

Diemtigtal Nature Park lies in the foothills of the Bernese Alps, just to the south of the Swiss Plateau.

The Alps were formed during the Alpine orogeny alongside other major mountain ranges in the Alpide belt. When the African and European tectonic plates collided with one another, the immense pressure compacted the floor of the Tethys Ocean, forming the rugged mountains and thrusting them upward.

During the Pleistocene epoch, a majority of the region was covered by vast and expansive glaciers. As these glaciers slowly retreated, they further carved out the rugged limestone peaks and sweeping valleys seen within the park.

The glacial retreat within the Bernese Alps also left behind nutrient-dense soil, leading to the rise of alpine farming and agriculture that is still present in the park boundaries.

Though there are a handful of municipalities located within the park boundaries, Diemtigtal Nature Park is home to a diverse array of both flora and fauna. The farms in the park are home to around 10,000 cows, sheep, goats, and cattle and over 60 farms in the region produce traditional Alpine cheeses.

Forests in the park are dominated by broadleaf forests. Common tree species include European beech and silver fir. Higher elevations are home to Norway spruce and various alpine grasses.

Wildflowers thrive in the park during the summer months, often near streams and creeks. Common species of flowers include the Martagon lily, early purple orchid, cornflower, Martagon lily, and the globeflower.

Populations of western roe deer, northern chamois, and Alpine ibex are common in the region. Rocky alpine sections provide the ideal habitat for the Eurasian stoat and alpine marmot. Other smaller mammals found in the park include the brown hare, European badger, and Eurasian red squirrel. Red foxes have been spotted in the park, though they are not common.

The Bernese Oberland has been inhabited by humans for thousands of years. The first known settlements in the region were established during the Roman Empire, primarily along the rivers and lakes of the region.

Throughout the High Middle Ages, the populations of these settlements continued to grow as people started to realize the benefits of the region’s nutrient-dense soil. The area came under the rule of the Kingdom of Burgundy in the Middle Ages. After their rule, the land was controlled by a number of barons.

At the height of the Middle Ages, the valley within the park was used as a trading route across the Alps and into Lake Geneva and Valais. During the thirteenth and fourteenth centuries, various castles were built around these small alpine communities.

Throughout this time, the community of Zweisimmen continued to grow, and it eventually transformed into a center for local trade and government. During the 1750s, a trade route connecting Thun to Montreux passed through the region, allowing it to prosper even further.

Throughout the eighteenth century, various Alpine spas were constructed near the natural mineral springs of Diemtigen. The Rothbad Horben and Kurhaus Grimmialp in Schweden were two popular spas that led to the rise of tourism in the valley.

The construction of Simmental Road and the Spiez-Zweisimmen Railroad in 1897 also allowed for further tourism growth in the region.

Diemtigtal Nature Park is home to numerous trails for hiking and biking. Here are some of the most popular trails and regions in the park:

The Seebergsee - Chumigalm offers hikers a view of the true Alpine terrain found within the park. The route is 11.4 km (7.1 miles) long and it has 710 m (2,329 ft) of elevation gain. This hike climbs steadily to Seebergsee before ascending up to the summit of Chumigalm.

From the summit of the peak, hikers have stunning views of the rolling alpine meadows, forested hillsides, and the valley floor far down below. Hikers are also likely to see livestock roaming throughout this route.

The Grimmimutz Trail lies at the southern end of the valley near some of the tallest peaks in the park. The loop trail is 4 km (2.5 miles) long and it has 157 m (515 ft) of elevation gain.

During the summer months, this relatively short trial offers impeccable views of the Alpine landscape and wildflowers. Throughout the winter months, the route provides access for snowshoeing and backcountry skiing. Those exploring during the winter should be equipped with the proper gear and skill set for the conditions that they’ll face.

The Nüegg - Homad - Wiriehorn Trail is an out and back hike totaling 9.3 km (5.8 miles) with 1,010 m (3,313 ft) of elevation gain. The trail takes hikers to the summit of both Homad and Wiriehorn situated near the center of the park.

From the various summits on this trail, hikers can enjoy views of the valley, the expansive Bernese Alps, and the rolling alpine fields below.

Looking for a place to stay near Diemtigtal Nature Park? Here are some of the best cities and villages to check out in the region:

The municipality of Zweisimmen lies within Diemtigtal Nature Park, making it the gateway into the Gstaad region. The community is also the starting point for the rail line that connects Monteux to the Bernese Oberland.

A cable car takes visitors from the valley floor up to the Gstaad winter sports region. During the summer months, the cable car provides easy access for hiking throughout the region. The Obersimmental “home trail” takes visitors along a route featuring the stunning Simmental farmhouses.

The church in the village, along with the ruins of the Oberer Mannenberg Castle are two Swiss heritage sites of national significance that are found in the town. During the winter, Zweisimmen is a gateway to some of the best skiing in the region.

Interlaken lies between Brienz Lake and Thun Lake, just to the northeast of the valley. The city is home to around 5,300 residents and is a resort town situated in the Bernese Oberland. Interlaken lies on a narrow section of valley that separates these two lakes.

Old timber houses and buildings line the streets of Interlaken while the Bernese Alps tower above. The nearby forested hillsides rise steeply to reveal the region’s alpine meadows, hiking trails and ski resorts.

From Interlaken, visitors can also board the Jungfraujoch, a two-hour scenic train that leads to the Jungfraujoch viewing point, the highest train station in all of Europe. 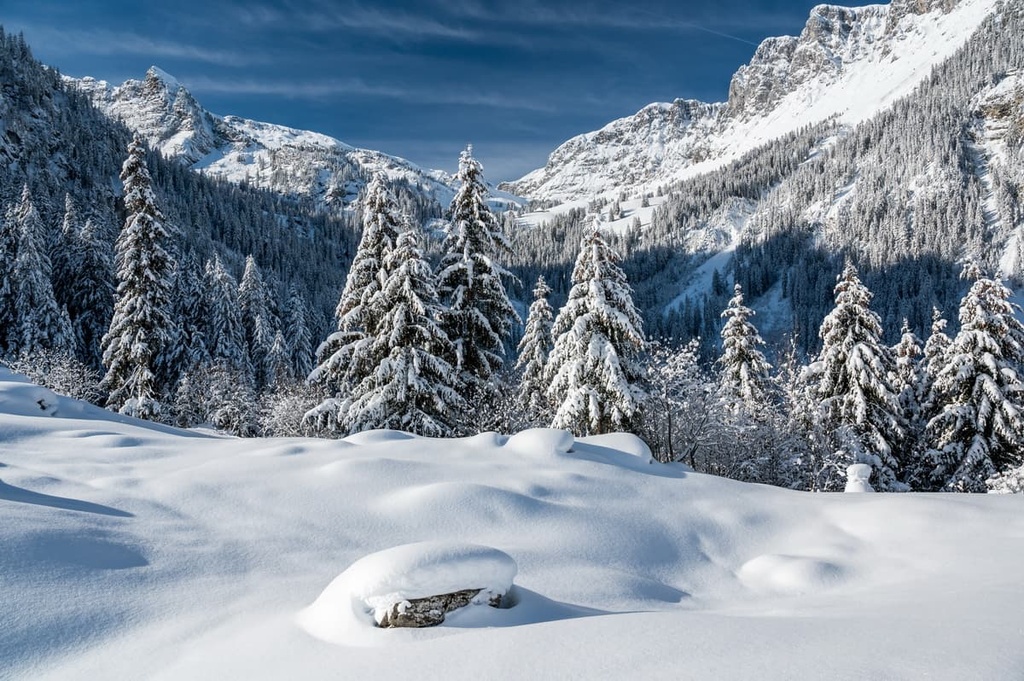 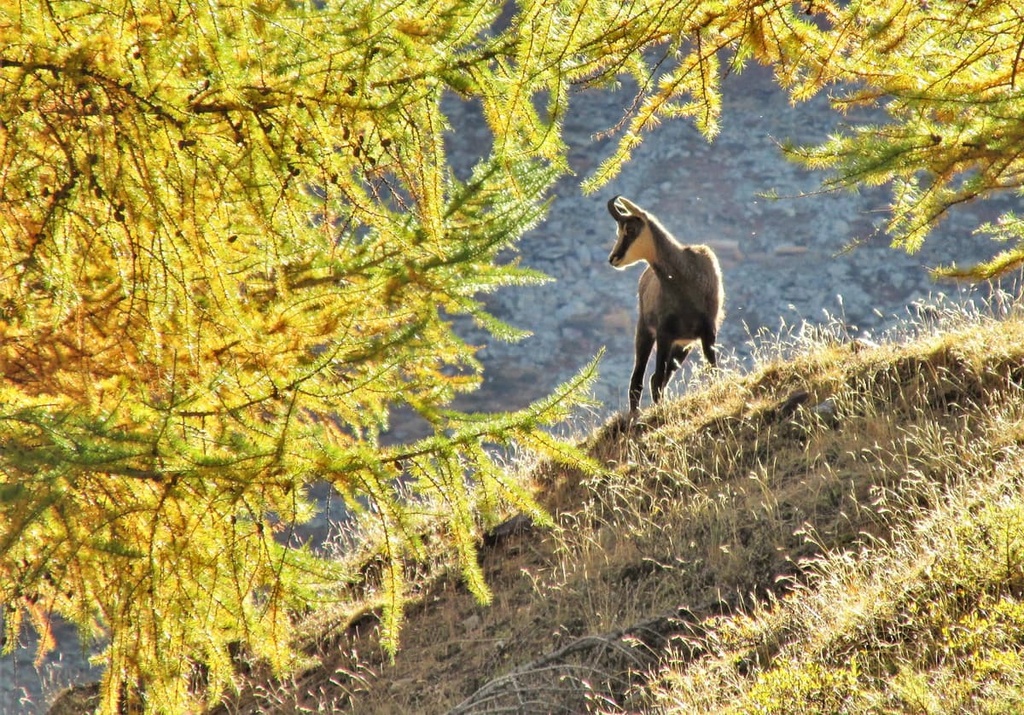 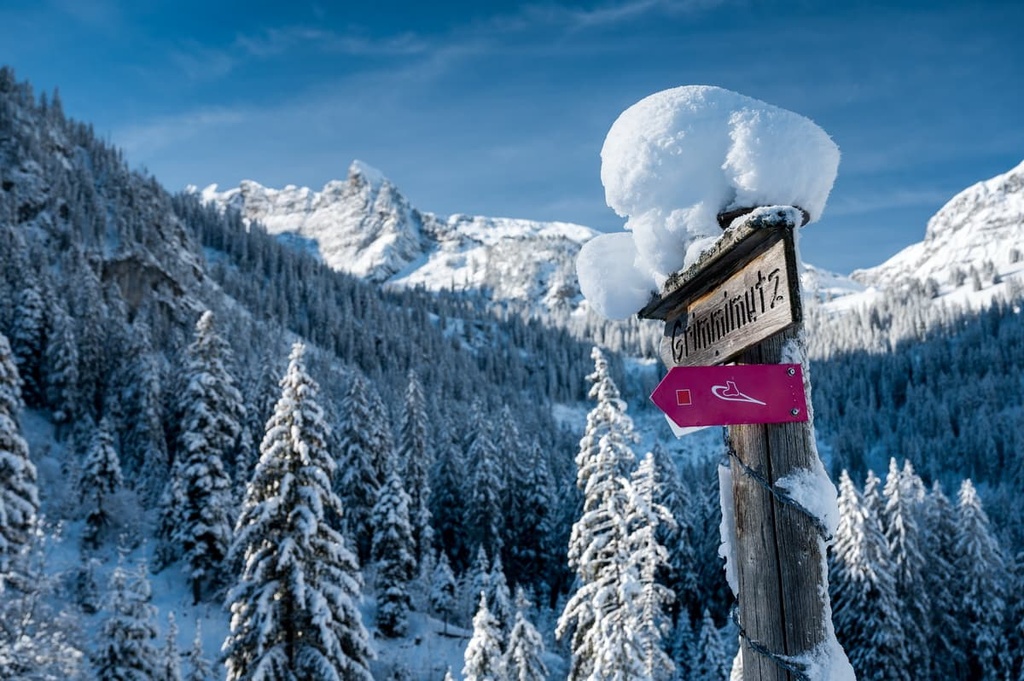 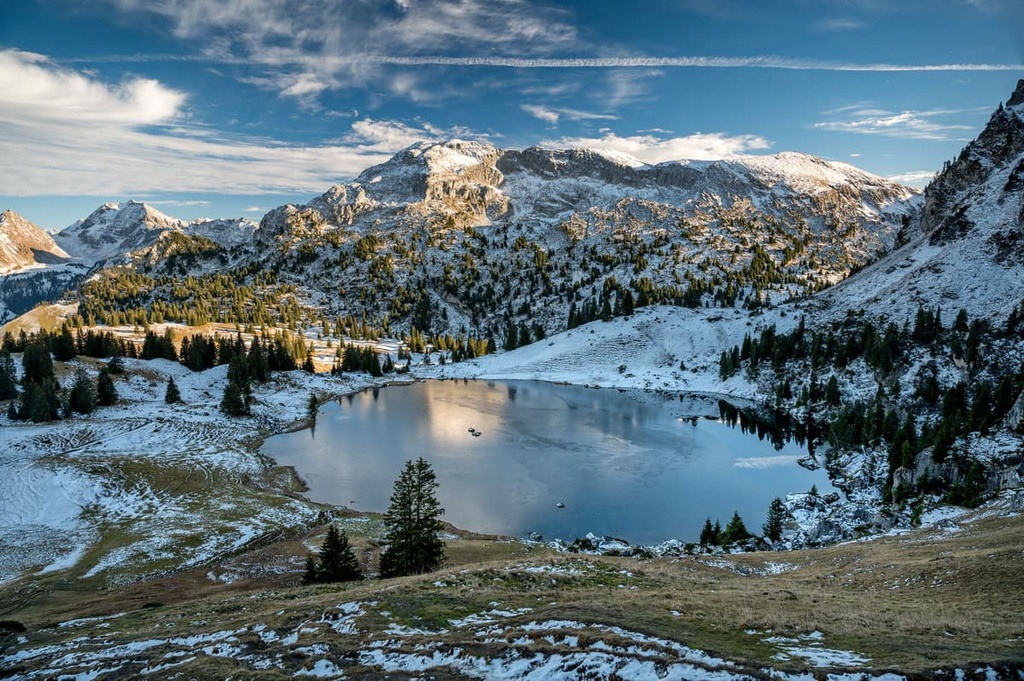 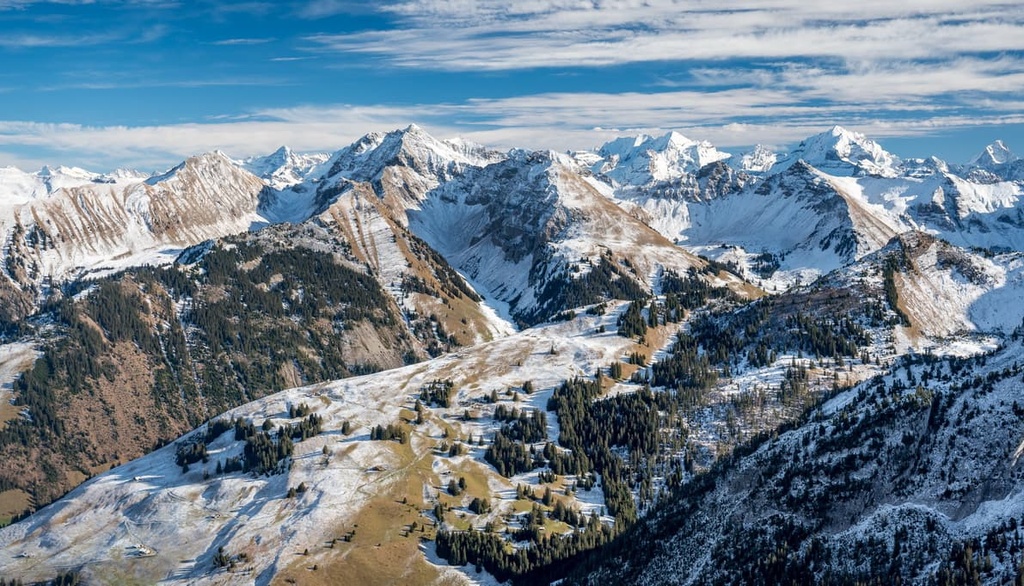 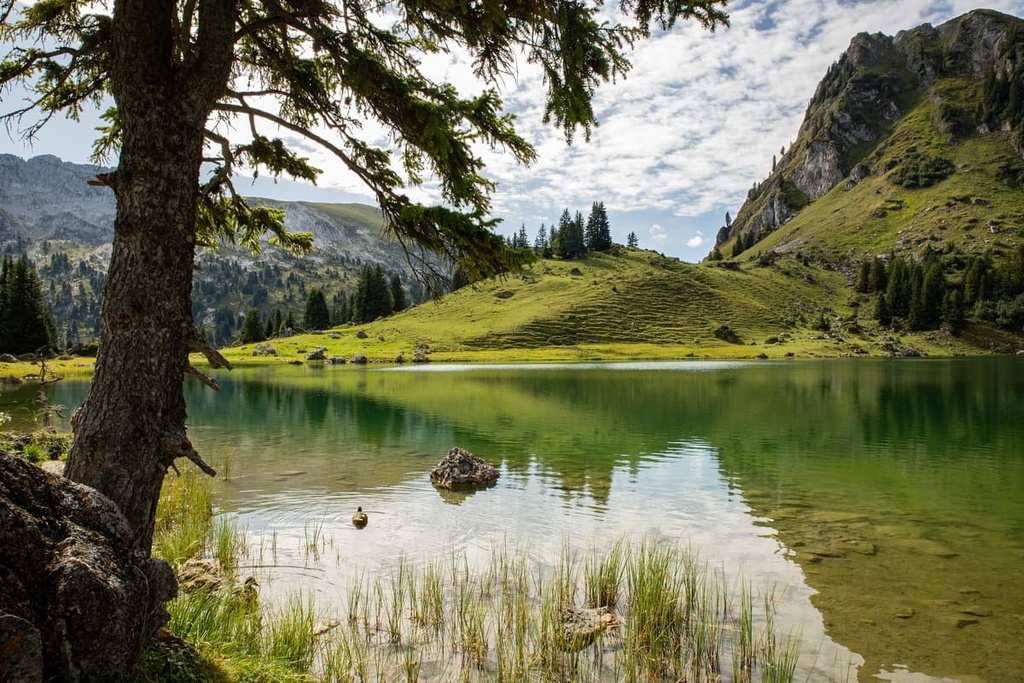 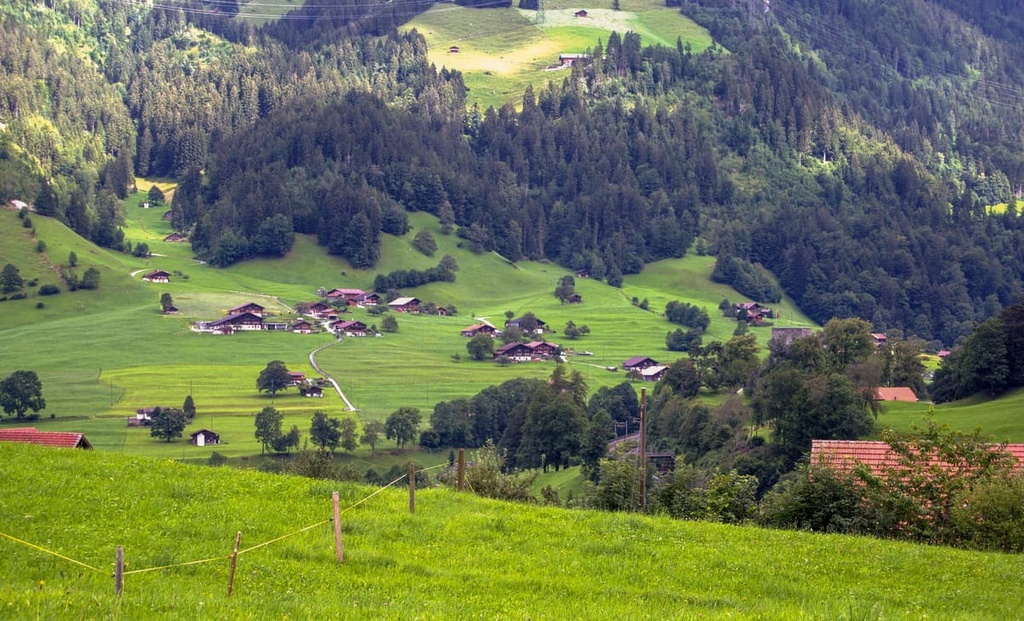