Fribourg (German: Freiburg) is a canton located in western Switzerland. The canton spans from the Swiss Plateau to the Pre-Alps in the south. There are 237 named peaks in Fribourg. The tallest and most prominent peak is Vanil Noir at 2,389 m (7,838 ft) tall with 1,112 m (3,648 ft) of prominence.

Fribourg lies in western Switzerland and marks one of the country’s 26 cantons. The canton spans 1.671 sq. km (645 sq. miles) across the region.

Lake Neuchâtel marks the northwestern boundary of the canton while the canton of Vaud is to the west and the south. Just a few kilometers west of the canton’s border lies Lake Geneva, though the canton does not technically reach its shores. The canton of Bern spans along the eastern edge of Fribourg.

Fribourg has two enclaves within Vaud and one exclave within Bern. On Lake Neuchâtel lies a large exclave of the canton. The geographic features in the canton vary greatly depending on the region.

A majority of the canton lies on the Swiss Plateau, which defines much of northern Switzerland. Lands in the west of the canton, around Lake Neuchâtel, are generally more flat and feature rolling hills. In the southeastern portion of the canton, elevations change as the land transitions into the pre-Alps.

The tallest peaks within the canton can be found in the southern section, marking the transition from the Swiss Plateau into the Alps. Here, forested hillsides begin to thin as elevations increase, giving way to sweeping alpine fields and rugged mountain ridgelines.

Additionally, Fribourg is home to a number of parks and recreation areas. A few major parks in the canton include Gruyère Pays-d'Enhaut Regional Nature Park and a small portion of Gantrisch Nature Park.

The peaks and ridgelines found in the southern portion of the canton are part of the Bernese Alps, a subrange of the larger Alps. The tallest peaks in the canton lie within this region.

As a whole, the Alps mark the tallest mountain range that lies entirely within Europe. The range was formed during the Alpine orogeny, a major mountain building event that occurred between 65 million and 2 million years ago.

Prior to formation of the range, the Tethys Ocean lay between the supercontinents of Laurasia and Gondwana, present day Africa and Europe. As the tectonic plates began to move towards one another, the ocean was slowly drained leaving behind mineral sediments.

When the two plates collided with one another the immense pressure thrust the Earth’s crust upwards, forming the mountain chain known as the Alpide Belt. This major mountain chain extends from southern Europe and into south-central Asia, encompassing the Alps and various other mountain ranges.

Metamorphism gave further rise to the peaks, adding to the dramatic changes in elevation found in the canton and throughout Switzerland. A combination of recumbent folds and thrusting transformed the marine sediment from the Tethys Ocean into the rocks that we see in the Alps to this day.

The Bernese Alps, and the rest of the range, were heavily glaciated during the Quaternary period. As the glaciers receded, their erosive forces carved out the sweeping valleys and glacial cirques in the limestone, creating the distinct jagged ridgelines visible today.

The tectonic pressure that formed the Alps also helped give rise to the Swiss Plateau. There are multiple geological layers to the Swiss Plateau that have been well documented over the years. The thick molasse sequence is often noted as one of the most geologically important, found where the plateau begins to transition into the Alps.

This layer was formed due to the plateau’s close proximity to the range. When the peaks were rapidly eroded, sediment was carried down the northern side of the Alps and deposited across the basin.

Throughout its geological history, the Swiss Plateau has been flooded twice, each time forming shallow seas. Sedimentary rocks are found throughout this region of the canton.

The drastic changes in elevation throughout the canton allow for a variety of both flora and fauna to thrive within Fribourg.

The highest elevations in the canton lie within Gruyère Pays-d'Enhaut Regional Nature Park. Here the alpine terrain features small patches of trees along with a variety of wildflowers during the summer months. Some of the common flowers include Martagon lily, spotted deadnettle, purple orchid, cornflower, and globeflower. The highest peaks often feature grasses and lichen amidst the rocky peaks.

The parks found in the southern stretches of the canton allow for larger wildlife to thrive. Within the canton live populations of western roe deer, red deer, fox, chamois, ibex, marmot, pine marten, and various species of rodents and bats.

Common birds include blake kite, red kite, gray heron, great cormorant, Eurasian eagle-owl, and the golden eagle. The lakes and rivers in the region are home to brown trout, northern pike, European bullhead, European perch, rudd, and the common barbel, amongst others.

The main activity on the Swiss Plateau was not located within present-day Fribourg, but further north along the plateau. Thus, many remnants have instead been found in the valley of the river Broye. Members of the Celtic tribe known as the Helvetii lived in the nearby region but were defeated by the Romans during the last century BCE.

Fribourg, the capital town of the canton, was founded in 1157 CE. The ancient city was surrounded by cliffs on three sides, allowing for the city to be easily defended. After its establishment, Fribourg built a city-state.

In 1277 the city was sold to the Habsburgs with trade and industry growing in the following decades. The production of leather and cloth dominated the region during the 14th century, establishing Fribourg as a hub for such services in Central Europe.

Military conflicts dominated the mid-15th century including the war against Savoy, the Burgundian Wars, and the war against Charles I of Burgundy.The canton of Fribourg would eventually join the Swiss Confederation in 1481.

During the Reformation, the communities within Fribourg remained Catholic while nearby Bern was Protestant, leading to numerous conflicts between the two groups. The Act of Mediation in 1803 abolished the Helvetic Republic which had been established in 1798. In 1803, the city of Fribourg was made the capital of the region and of its namesake canton.

Industrialization was brought to the city in 1862 after the construction of the midland railway line. During this time the city center was shifted from the Old City to the Train Station quarter. The University of Fribourg was established in 1889 and marked an important transition for the region. Today the canton is home to around 325,500 residents.

Fribourg is home to numerous trails for hiking and outdoor recreation. Here are some of the most popular trails and regions in the canton:

Gruyère Pays-d'Enhaut Regional Nature Park lies in the southern portion of Fribourg within the Bernese Alps. The surrounding region is known for its tradition of Alpine dairy farming and is home to some of the most stunning views in the entire canton.

In the park, hikers are met with lush alpine pastures while jagged ridgelines tower above. The park extends throughout the cantons of Fribourg and Vaud.

Looking for a place to stay in Fribourg? Here are some of the best cities and villages to check out in the canton:

Fribourg is the capital city of the canton of Fribourg, situated on both sides of the river Saane on the Swiss Plateau. The city lies in the cultural boundary between the German and French speaking regions of the country; thus, both languages are spoken throughout the city.

Home to the University of Fribourg, the city marks one of the largest medieval towns in the country. Remnants of the ancient walls can still be found throughout the city limits. Home to around 40,000 residents, many people come to visit the city from nearby Bern and Lausanne.

The medieval town of Gruyère lies just a short journey outside the capital city of Fribourg. Situated within the upper valley of the Saane river, Gruyère cheese is named after this historic town and region.

Home to around 2,200 residents, Gruyère is a popular tourist destination throughout the year. Visitors come to learn about, and taste, the famous Gruyère cheese. Another major site in Gruyère is the castle which was built between 1270 and 1282. Mont Moléson lies nearby offering visitors the opportunity to hike to or take a cable car to the summit. 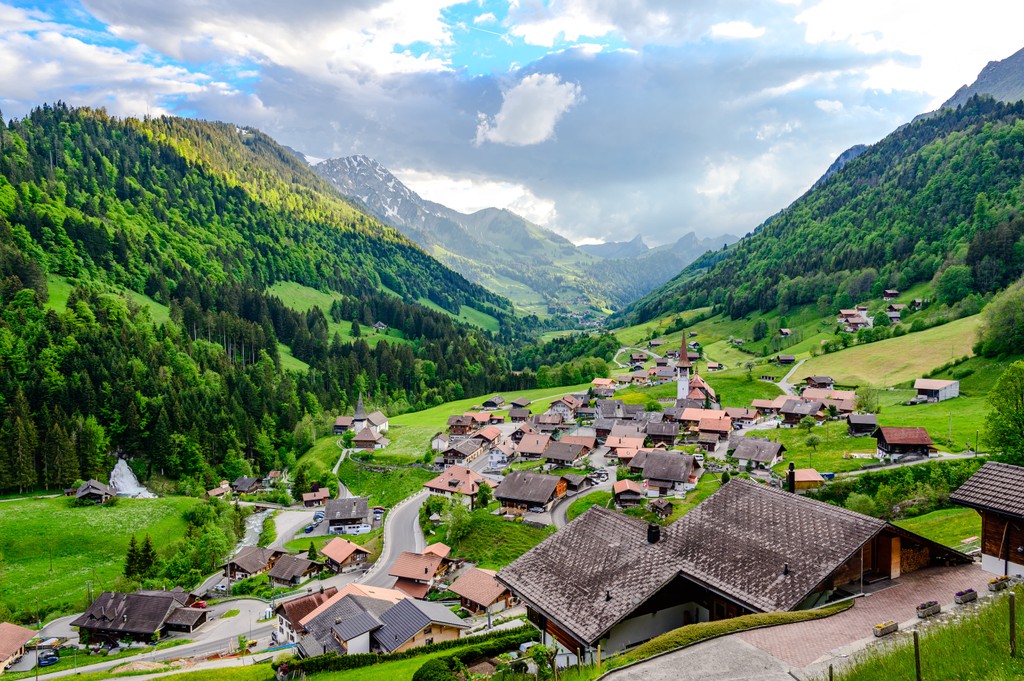 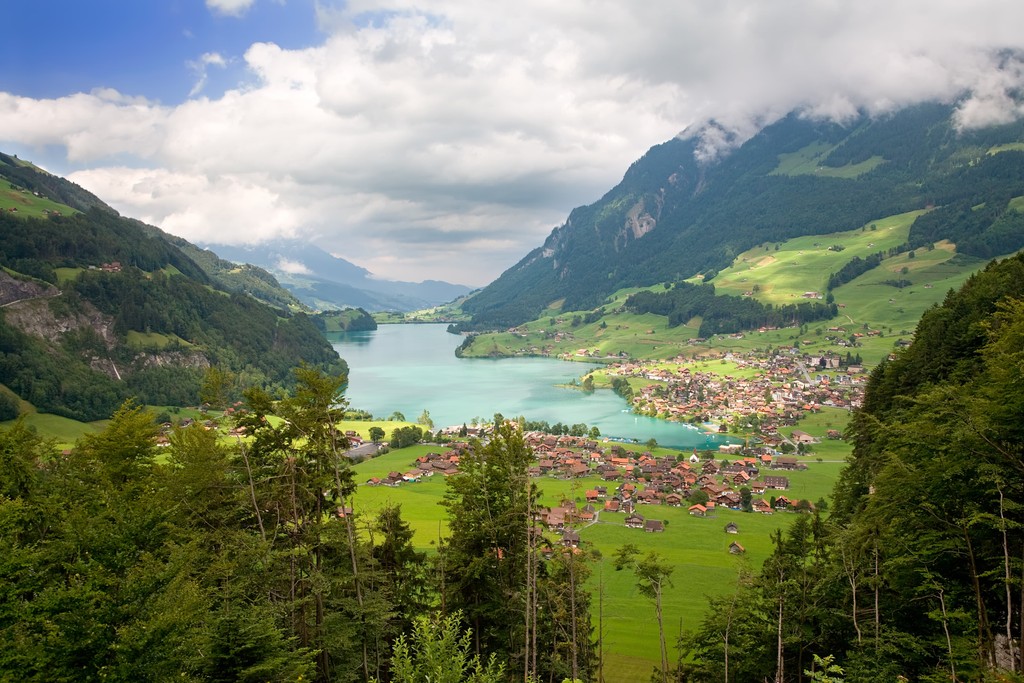 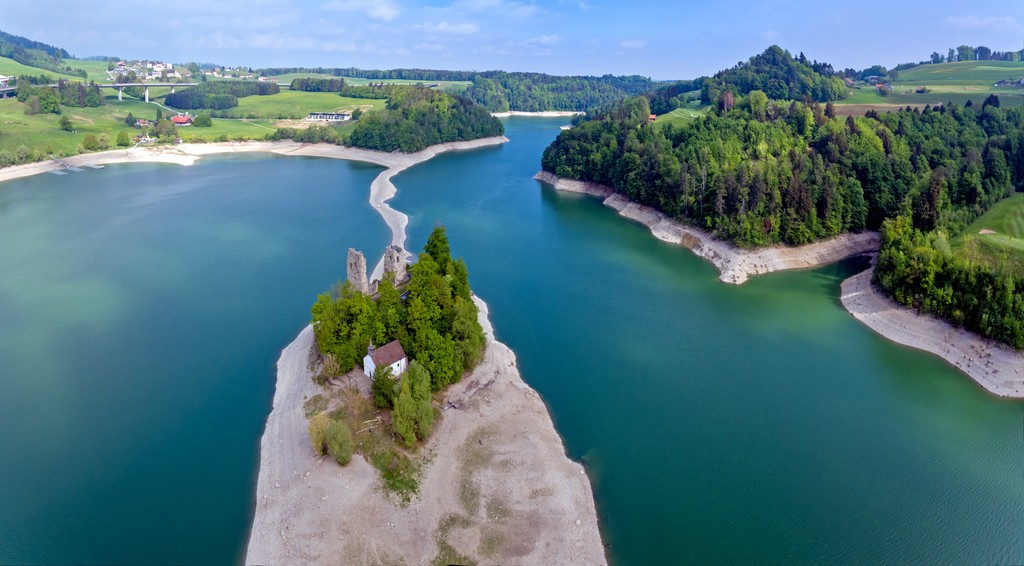 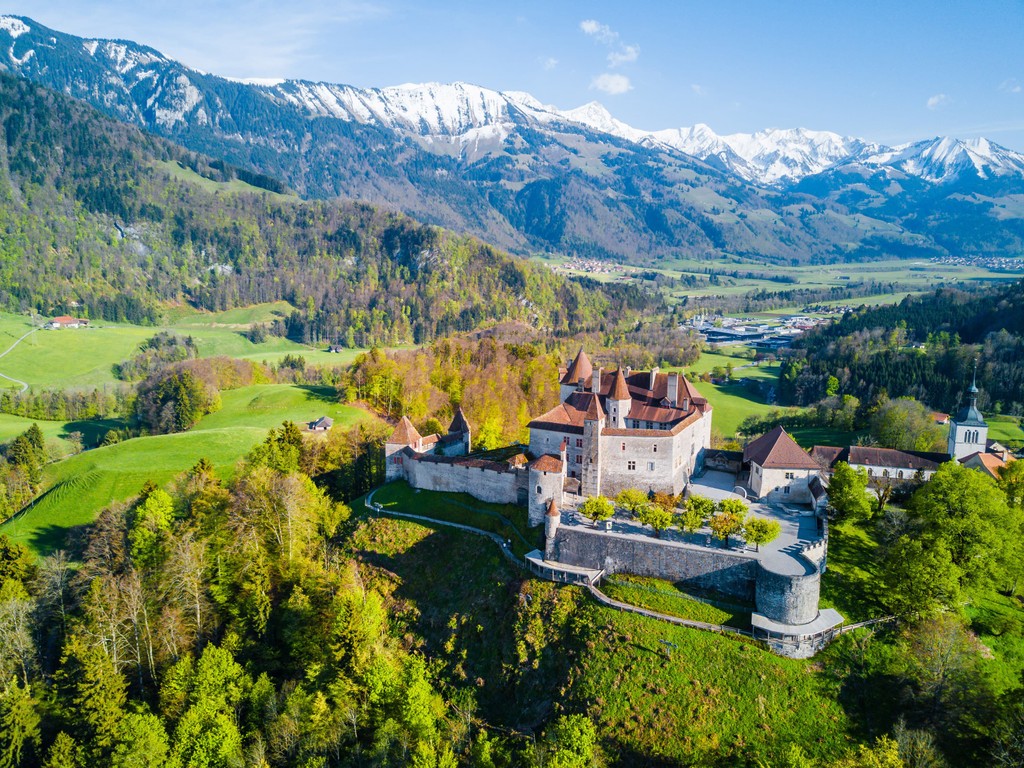