Nidwalden is a small canton located in central Switzerland. The canton is situated just south of Lake Lucerne in the Alps. The tallest peak in the canton is Jochstock at 2,987 m (9,800 ft) in elevation while the most prominent peak is Bürgenstock with 680 m (2,231 ft) of prominence. 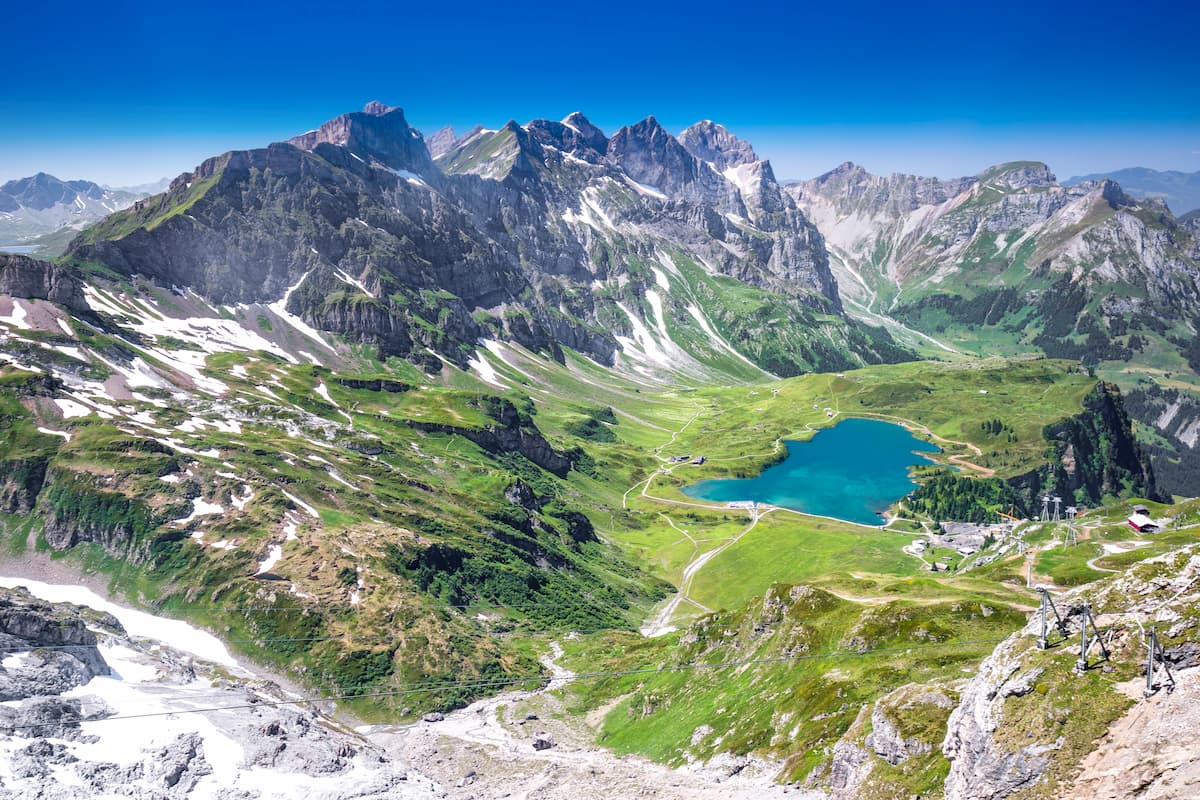 Nidwalden is one of the 26 cantons in Switzerland. Situated in the central portion of the country, the canton borders the cantons of Lucerne and Schwyz to the north, Bern to the south, and Uri to the east.

The canton of Nidwalden is bounded by Lake Lucerne on its northern edge. Meanwhile, the rest of Nidwalden is dominated by rugged mountain ranges. Nidwalden has a total area of 276 sq. km (107 sq. miles). The A8, an important motorway, crosses through the northernmost portion of Nidwalden, following along the shores of the lake, and leading to Altdorf.

Lower elevations in the canton feature gentle rolling hills. Around 40 percent of the land in the canton is used for farming purposes. These meadows and fields are often located near vast sections of forest. In fact, forests are found throughout about a third of the canton.

Though both fields and forests are common in the canton, Nidwalden also features rugged peaks and stunning glaciers. Together these dramatic features are found in around 25 percent of the canton’s total area.

While the forest and meadows are often inhabited by a wide range of flora, the peaks in the region are often quite barren, with many having snow throughout the year.

Additionally, Nidwalden is located near a number of important parks and protected areas. This includes UNESCO Biosphere Entlebuch, which is situated just to the west alongside Gantrisch Nature Park. Binntal Nature Park is also situated to the south of the park while both Beverin Nature Park and Parc Ela lie to the east.

Nidwalden lies along the northern side of the Western Alps. The small region is part of a subrange known as the Uri Alps (Urner Alps).

The Alps are the highest mountain range that lies fully within the European continent. The Alpine orogeny, which occurred from 65 million to 2 million years ago, was the major mountain building event that formed much of the range.

During this time, the Pangean supercontinent split, creating a sea between Laurasia and Gondwana. This body of water, known as the Tethys Ocean, got progressively smaller as the two continental plates drifted towards one another. When the two plates finally collided, the immense pressure formed the mountain ranges of the Alpide belt, including the Alps.

The marine sediment found along the floor of Tethys Ocean was compacted and thrust upwards by recumbent folds and thrust faults. Erosion and glacial retreat further carved out the rugged peaks seen within the range today.

Since many of the towns and cities within Nidwalden are quite small, the region’s flora and fauna have plenty of space to thrive.

Many of the sweeping fields of Nidwalden are used for cattle grazing and farming purposes. That said, the forested areas of the canton are primarily home to birch, pine, alder, and larch trees.

Other plant species can be found throughout the region, including flowers such as lily, primrose, astragalus, and tulip. The higher elevations in the canton are home to frangula shrubs and wool grasses.

The densely forested regions of Nidwalden are the perfect refuges for wildlife in the heart of Switzerland. Species commonly found throughout Nidwalden include chamois and red deer. The rock fields found at higher elevations are also home to snow hare, weasels, and beavers.

Other animals that live within the canton include green lizards, rock ptarmigan, and even wolves. These wolves are rarely seen by humans and are thought to spend more time in nearby Uri.

During the summer months, insect populations thrive in the alpine terrain of the canton, too. Many species of both grasshoppers and butterflies are common throughout Nidwalden.

Signs of human settlement within present day Nidwalden date back to Neolithic times between about 4000 to 3100 BCE. There are a number of important archeological sites located near Stanserhorn that contain artifacts from the Late Bronze Age dating back to 1400-1100 BCE.

During the rule of the Roman Empire, Gallo-Roman or Celtic people inhabited the region. Many of the names given to towns during this time have Celtic and Gallo-Roman roots.

The Alemanni Germanic tribe entered the region around the eighth century, settling in the valleys near Lake Lucerne. A Catholic church was constructed in Stans during this time period but would later be replaced in the tenth century.

By the end of the thirteenth century, much of the land in Nidwalden was owned by a handful of major families and by some important abbeys, including the Habsburgs, Engelberg Abbey, and Murbach Abbey. When Rudolph of Habsburg bought Obwalden from the Murbach Abbey, Nidwalden joined Uri and Schwyz to form what would later be known as the Old Swiss Confederacy.

Early forms of government began to form during the fourteenth and fifteenth centuries. These governments featured institutionalized assemblies and courts. French Revolutionary troops of the Helvetic Republic forced Switzerland to become a united nation in 1798.

This idea of unity was not popular in Nidwalden at the time. Rebel groups retaliated by threatening the French Republic. French troops then attacked Nidwalden in September of 1798, killing over 400 people.

Napoleonic rule ended in the canton 1814. In 1877, Nidwalden wrote a new constitution for governing the canton. This constitution has since undergone a number of changes, including the abolishment of the Landsgemeinde (cantonal assembly) in the late 1990s.

Economically, the canton of Nidwalden is in a state of flux. For most of its history, until about the twentieth century, much of the canton’s economy depended on agriculture. However, in recent decades, industry, forestry, and tourism have become much more important in the economy. Nidwalden is still a hub for agriculture, though, especially with regards to dairy farming.

Nidwalden is home to numerous trails for hiking and outdoor recreation. Here are some of the most popular trails and regions in the canton:

The Felsenweg Bürgenstock loop is the most popular trail within the canton. The route is 6.8 km (4.2 miles) long with 361 m (1,184 ft) of elevation gain. It takes hikers up to the summit of Bürgenstock.

Throughout the loop hikers walk through cow pastures, forests, and rock tunnels, all while also providing sweeping views of Lake Lucerne.

The Kälti–Stanserhorn Trail begins in Kälti, which can be reached by train from Stans. This challenging route is 6.5 km (4 miles) long one way with 1,241 m (4,071 feet) of elevation gain. It climbs steadily through pastures while continually gaining in elevation until it reaches the summit of Stanserhorn.

Along the route, hikers have views of Lake Lucerne and the lush valleys down below. During the summer months, the route is full of wildflowers and native bird species. Stanserhorn is located near the center of Switzerland, and has a restaurant situated at its summit.

Once at the summit, hikers can enjoy some food and drink at the restaurant before taking a cable car down to the city of Stans. The route can be extended by starting from Stans instead of at Kälti station.

The Ennetbürgen - Stansstad Route is a point to point trail totaling 13 km (8 miles) in length with 827 m (2,713 feet) of elevation gain. This trail walks along the northernmost portion of Nidwalden, near the shores of Lake Lucerne.

Hikers on this trail can enjoy views of the lake throughout their adventure thanks to the region’s steep and dramatic cliff sides. Though much of the trail is forested, there are multiple viewpoints along the route.

Looking for a place to stay in Nidwalden? Here are some of the best cities and villages to check out in the region:

Stans is the capital city of Nidwalden. It is located just to the northeast of the Stanserhorn. The city is one of the oldest settlements within the valley and is home to around 8,500 residents. The main attraction within the city, and much of the canton, is the Stanserhorn.

A cable car takes visitors from the city up to the summit of the mountain via one of the oldest mountain railways in the country. Another popular site is the Dorfplatz, or village square, which was rebuilt in 1715. The Parish church of St. Peter and Paul is still standing today even though it was built in the 1640s.

Stans lies between Lake Lucerne and the Uri Alps, a prime location that provides ample opportunities for outdoor recreation throughout the year. While hiking is popular during the summer, the winter months are the perfect time to explore nearby ski resorts and cross country trails.

The city is the only municipality separated from the rest of the canton by Alpanchersee, a lake connected to Lake Lucerne. From the shores of the lake, visitors can take a boat road to witness panoramic views of the region’s stunning landscape and its gorgeous mountains. Hergiswil is also home to a glass museum, and it features many local restaurants along its scenic waterfront. 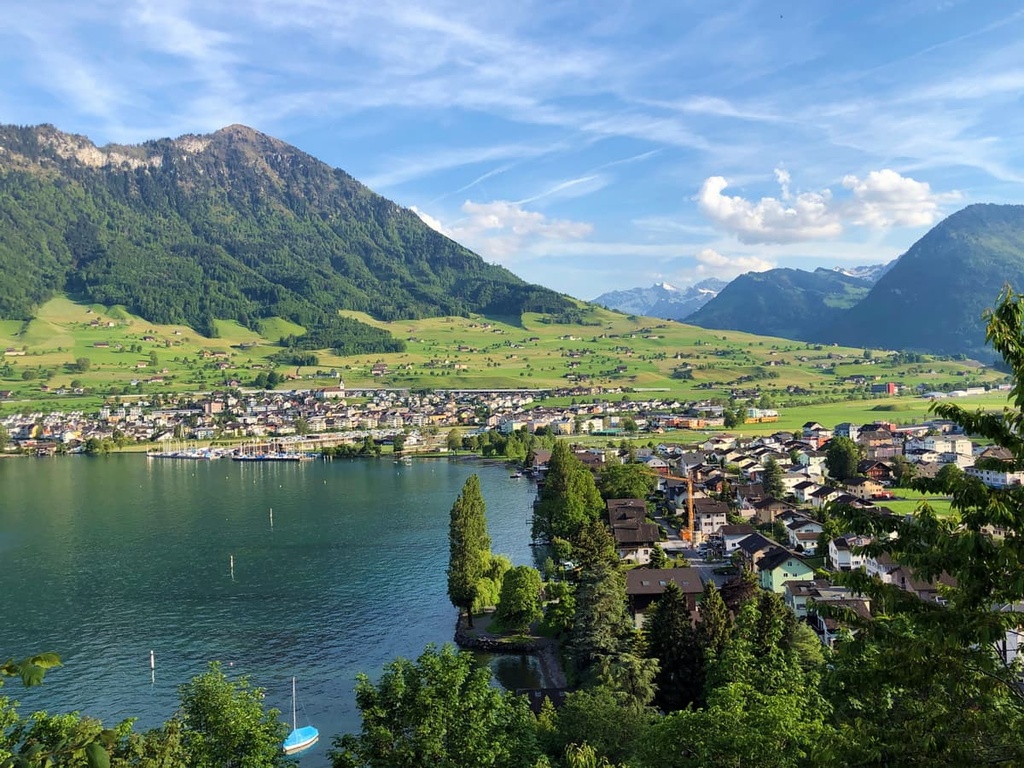 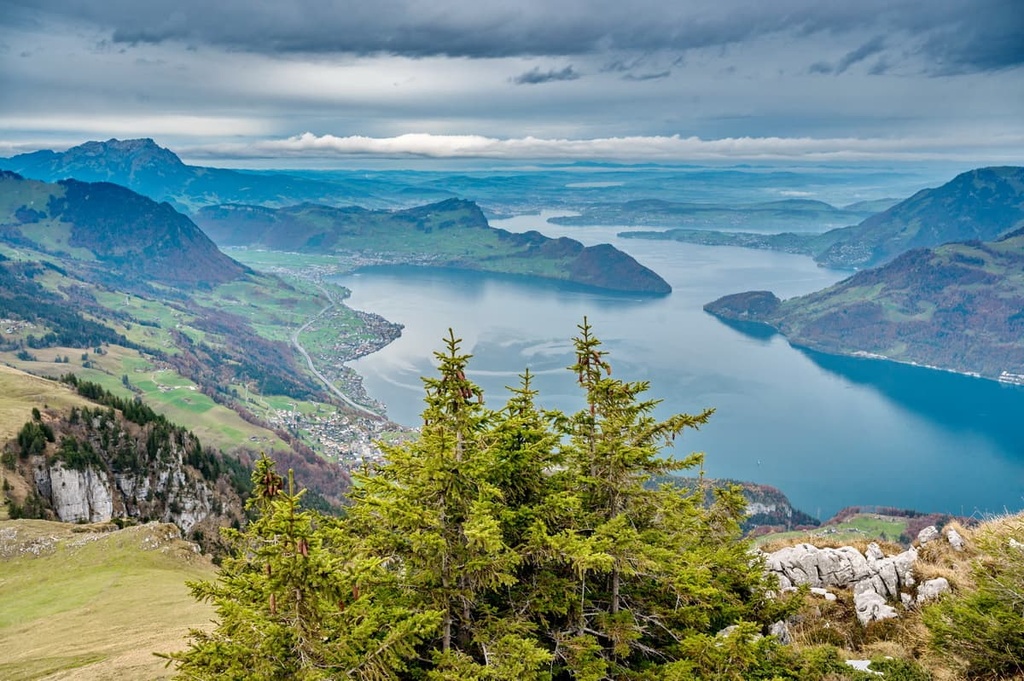 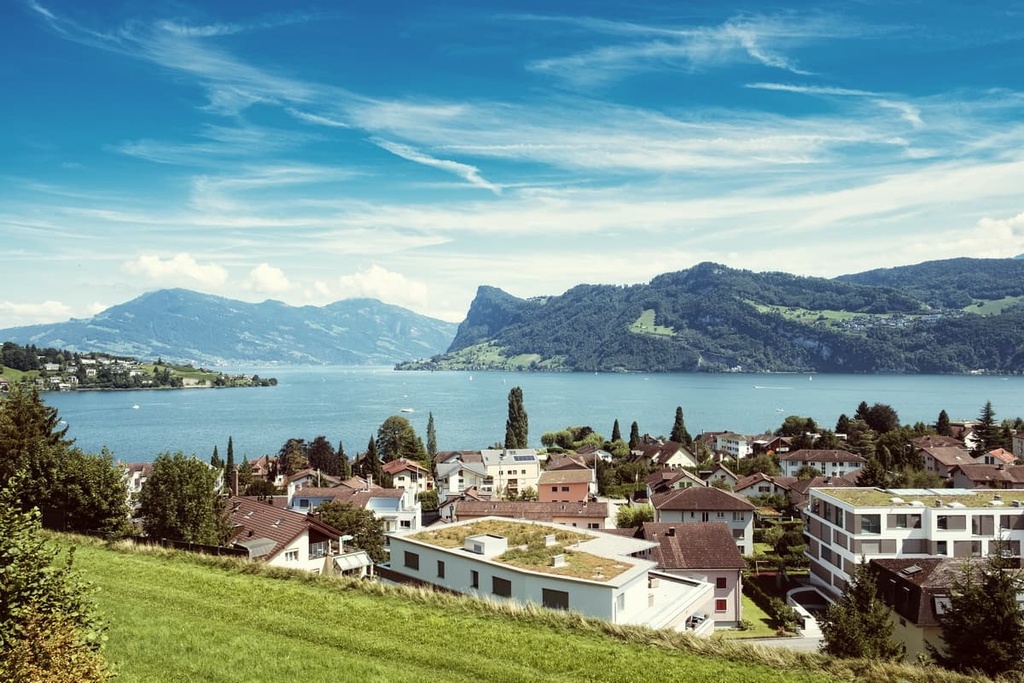 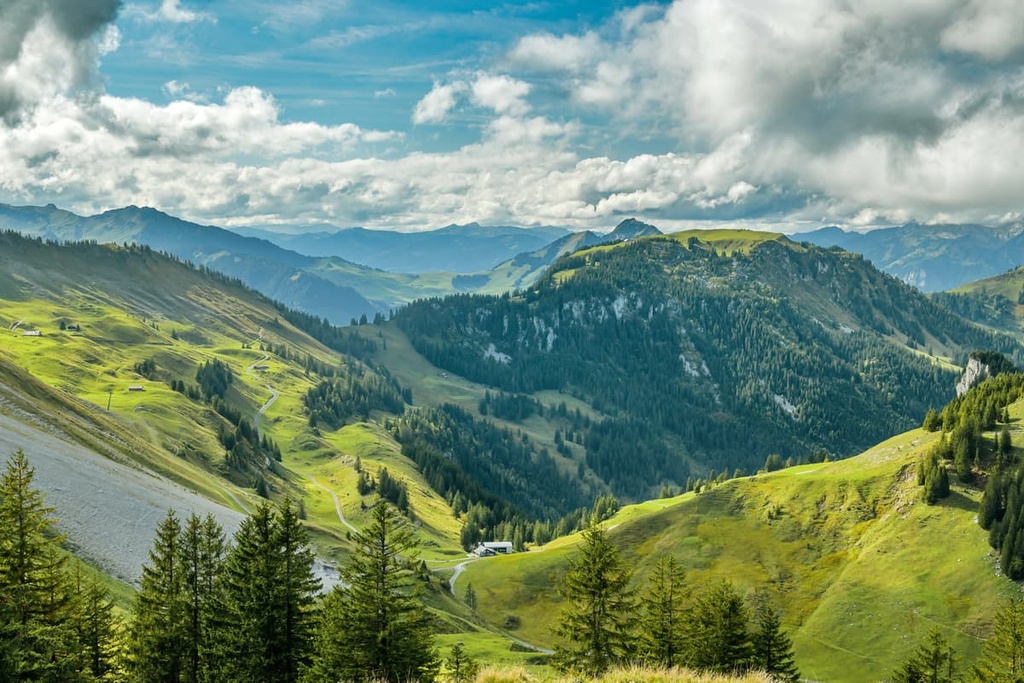 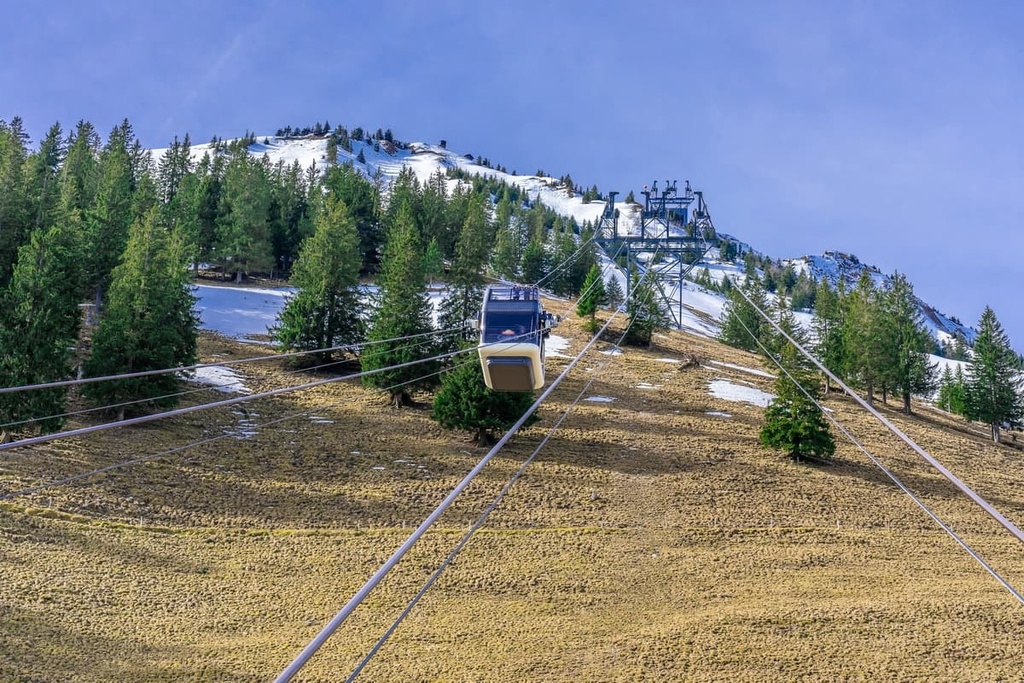 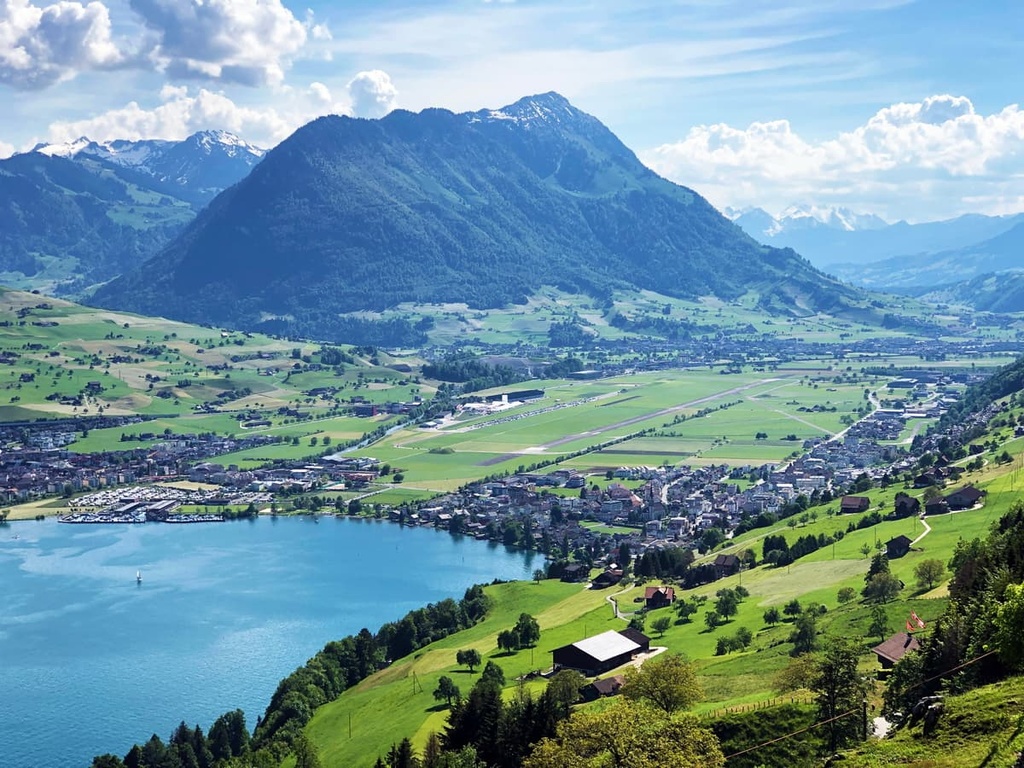