Uri is a canton located in central Switzerland. The valley landscape of the canton is surrounded by the craggy peaks of the Alps, which tower above. There are 590 named peaks in the canton. The tallest and most prominent is Dammastock, standing at 3,630 m (11,909 ft) in elevation with 1,470 m (4,823 ft) of prominence.

Uri is one of the 26 cantons in Switzerland. The landscape of the region is dominated by the Reuss River Valley and the river’s many tributaries. It is located to the east of the cantons of Obwalden, Bern, and Nidwalden, to the south of Schwyz, to the west of Glarus and Grisons, and to the north of Ticino and Valais.

The canton contains a total of 1,076 sq. km (416 sq. miles) of land, much of which is home to steep river valleys. The southeastern shores of Lake Lucerne also lie within the northern part of Uri.

The bulk of the canton is home to deep valleys. Meanwhile, the rugged peaks of the Alps towering above the canton to the south. Nearly a quarter of the land in Uri is used for agriculture while forested areas can be found at lower elevations, near valley floors.

Over 20 percent of the landscape in Uri is covered by the vast glaciers of the Alps. Towns are scattered throughout the canton, with the capital, Altdorf, being situated on the shores of Lake Lucerne.

A major highway crosses through Uri, providing access for locals and visitors to the alpine regions and hiking trails that dominate the southern part of the canton. Above the treeline, the landscape of Uri is home to sheer cliffs, rock fields, sweeping meadows, and craggy peaks.

Uri is situated on the northern side of the Alps, within the Western Alps. The subrange within the canton is known as the Uri Alps, also referred to as the Urner Alps.

This subrange is often broken down into two distinct regions separated by the Susten Pass. The tallest peak in the canton, Dammastock, lies in the more heavily glaciated southern region of the Uri Alps.

As a whole, the Alps are the highest mountain range located entirely within the European continent. The Alpine orogeny was the major mountain building event that helped create the range.

After the Pangean supercontinent split, the Tethys Ocean formed between the supercontinent of Laurasia and Gondwana. Over time, the two continental tectonic plates collided with one another. The immense pressure from this collision resulted in the formation of the Alpide belt, which includes the Alps.

The compacted marine sediments found on the former ocean floor were then uplifted into recumbent folds and thrust faults. Millions of years of erosion and glacial retreat gave way to the rugged peaks and massifs present within Uri today.

Continual folding, fracturing, and erosion has formed the Alps into their distinct shape and steep peaks. Besides the Uri Alps, parts of the Lepontine Alps also lie within the canton.

The lack of human development within Uri has allowed the flora and fauna of the region to thrive. Forested sections within the canton are home to alder, birch, pine, and larch trees.

Other plant species in the region include flowers such as primrose, tulip, lily, and astragalus. Alpine regions within Uri provide the ideal habitat for wool grasses and frangula shrubs.

The varying landscapes within Uri enable numerous species of fauna to inhabit the canton. Some of the most common species in the region include red deer and chamois.

Vast rock fields along with alpine rivers and lakes provide ideal habitats for both weasels and beavers. The snow hare can also be spotted in the alpine landscapes of the canton.

Animals such as wolves, green lizards, and rock ptarmigan are also present throughout the region. The small wolf populations tend to inhabit the less populated areas and are rarely spotted by hikers.

A multitude of insects can be found in Uri. Species of butterflies and grasshoppers thrive during the summer months.

In what is now the town of Amsteg, Bronze Age communities lived and thrived along the Reuss river. A village was built in the same valley during the Iron Age, lasting from 500–450 BCE. Settlements such as the settlement in Amsteg preserve remnants from the large population of humans that lived within what is now central Switzerland during this time.

The communities within the valleys of Uri were less affected by the Roman Empire due to their isolation from neighboring regions. After the fall of the Romans, northern towns in the canton united with others along the shore of Lake Lucerne.

Settlers from the Kingdom of Franks began to settle the fertile lands of the region around the seventh century CE. The communities in the valleys, known as Urseren, remained less explored by the new settlers.

Over the following centuries, Uri was ruled by numerous noble houses. Travel expanded throughout the region as the Gotthard Pass was eventually opened during the thirteenth century. This allowed for trade to flourish and the wealth of the region to grow.

Uri prevailed victorious over the Habsburgs in the Battle of Sempach in 1386 which led to the annexation of the Urseren Valley in 1410. Uri became an independent canton in 1803 and would later join the League of Sarnen in 1832. The coat of arms of Uri dates back to the thirteenth century, and it depicts a bull’s head.

Uri is home to numerous trails for hiking and outdoor recreation. Here are some of the most popular trails and regions in the canton:

Weg der Schweiz: Flüelen to Brunnen is a 17.7 km (11 mile) trail with 838 m (2,749 ft) of elevation gain. This point to point trail travels from Ingenbohl to Altdorf, along the eastern side of Lake Lucerne.

This scenic trail offers views of the lake throughout, while the snow capped peaks tower above on either side of the water. Parts of the route are paved, helping make the climbing portions slightly easier for hikers.

Weg der Schweiz: Seelisberg bis Flüelen is a point to point trail located on the western shores of Lake Lucerne within Uri. The trail is 17 km (10.6 miles) long with 486 m (1,594 ft) of elevation gain.

The gentle trail travels through fields and forested sections while staying near the water. From the various viewpoints along the route, hikers can see the snow capped peaks of Uri extended to the southeast.

Situated just outside of Amsteg, lies Höhenweg Maderanertal. This point-to-point trail travels through the characteristically deep valleys within Uri.

Here, hikers are surrounded by the steep peaks of the region before passing along Golzernsee. The route is 15.2 km (9.5 miles) long with 708 m (2,322 ft) of elevation gain. The trail can also be extended in order to make a loop, or to reach the summit of Chli Windgällen.

Looking for a place to stay in Uri? Here are some of the best cities and villages to check out in the region:

Situated in the northern tip of Uri lies the town of Altdorf. The town is located along the shores of Lake Lucerne, and it is the capital of Uri. With a population of around 10,000 people, Altdorf is the most populous city in the canton.

The Tell Monument is located in the town, which also hosts a music festival called Alpentöne. The location of the town allows it to act as a transportation hub for the entire region. The small community offers a quaint experience of both Lake Lucerne and the surrounding Alps.

Andermatt is a small mountain town situated within the Urseren Valley. Here lie the headwaters for the river Reuss, which flows north towards Altdorf.

The small town is at the crossroads of many major mountain passes in Switzerland. The Gotthard massif towers above with stunning views throughout the year.

While hiking, biking, and cable cars are popular summer activities, during the winter, the town transforms to a snow sports paradise. The greater Skiarena Andermatt-Sedrun region has numerous ski and snowshoe routes for visitors to enjoy. 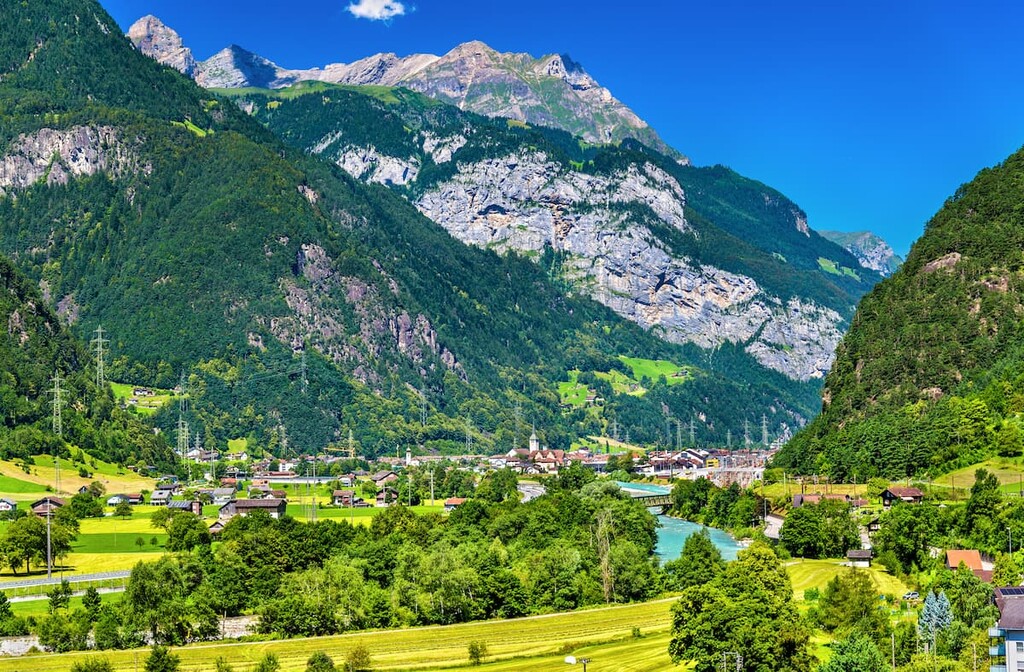 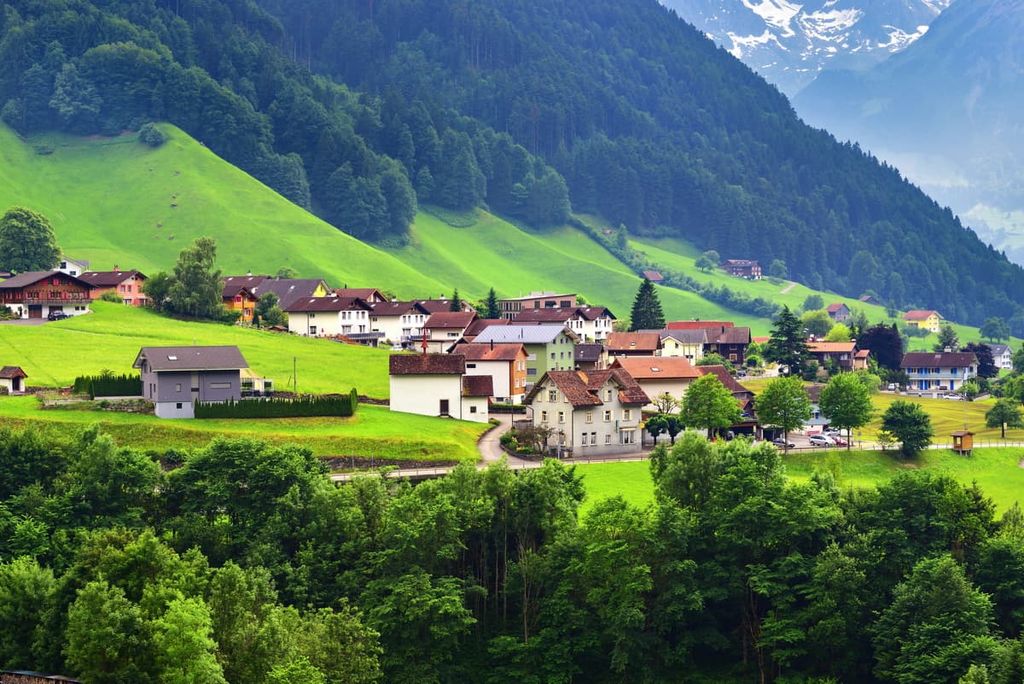 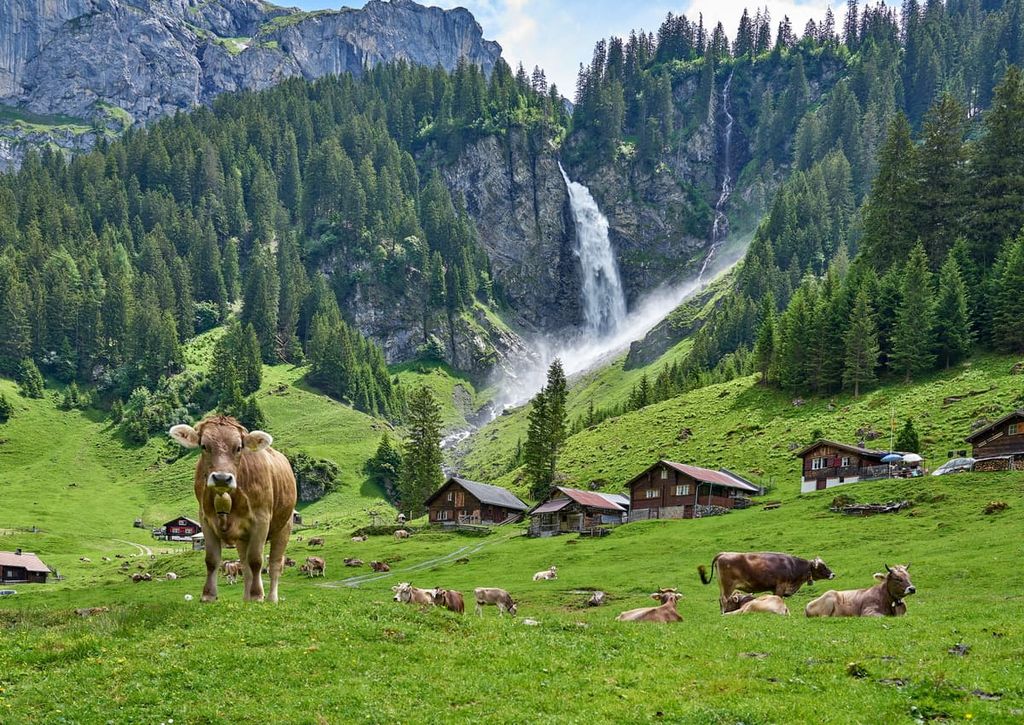 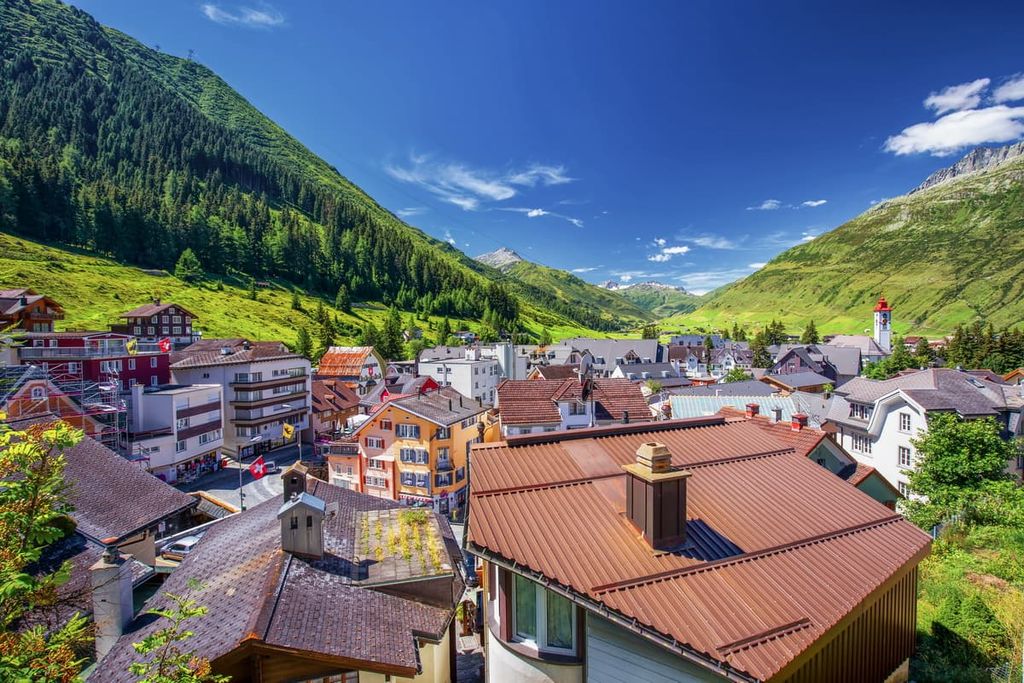 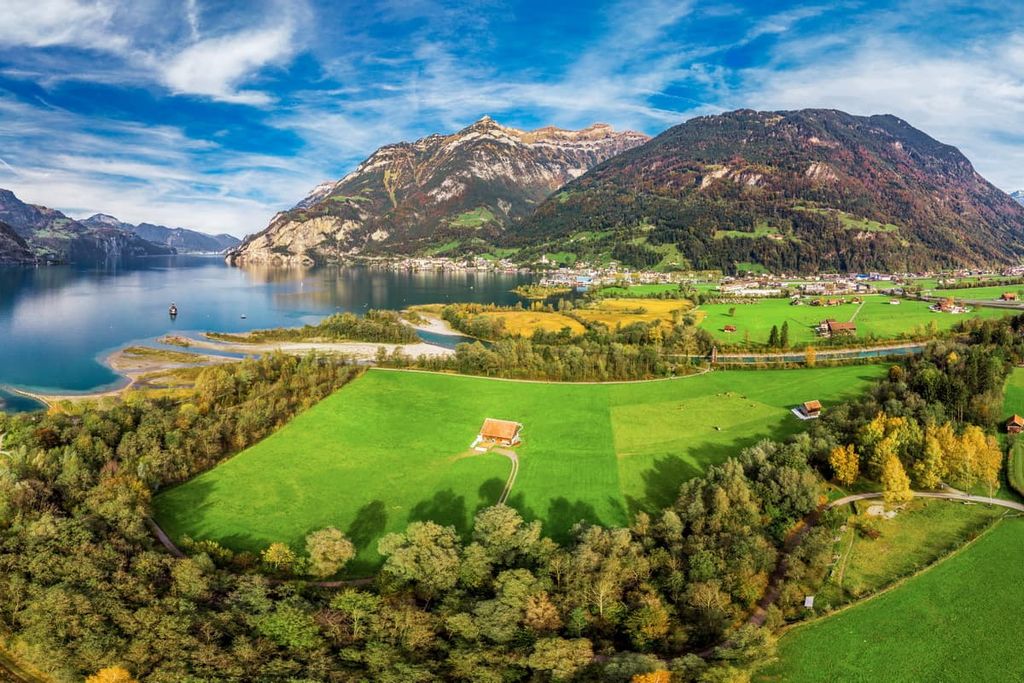 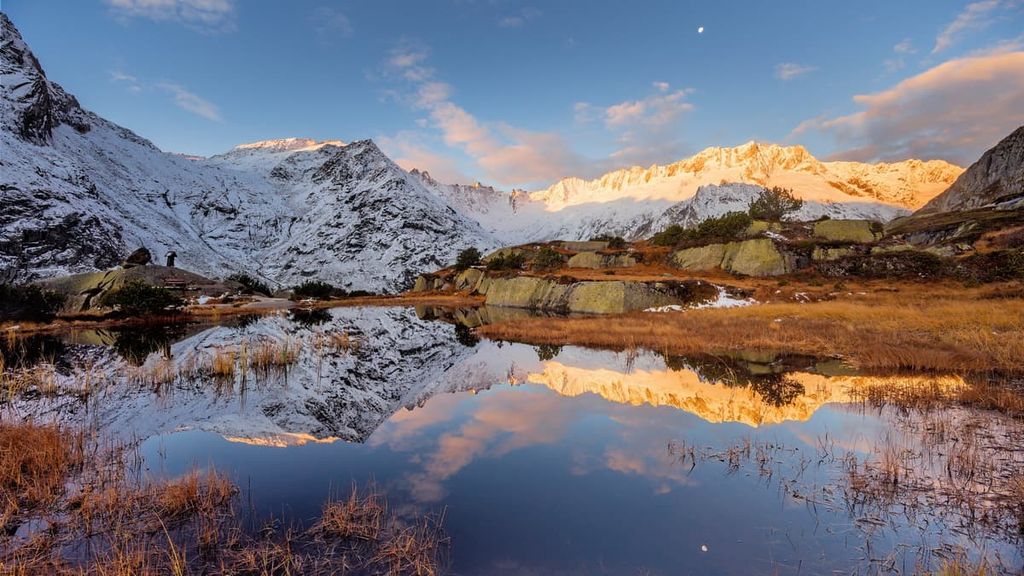 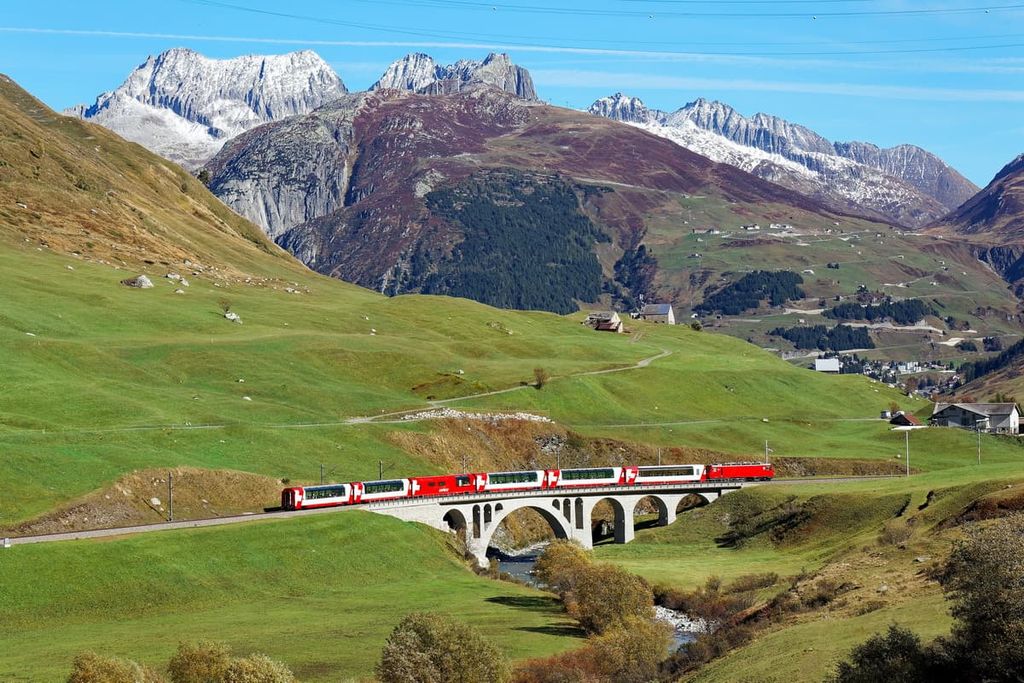