Zug is a canton located in central Switzerland. Despite the fact that it is one of the smallest cantons in the country, Zug features a diverse and varied landscape. There are 36 named mountains within Zug. The tallest and most prominent peak in the canton is Wildspitz, at 1,580 m (5,184 ft) in elevation and with 791 m (2,595 ft) of prominence. 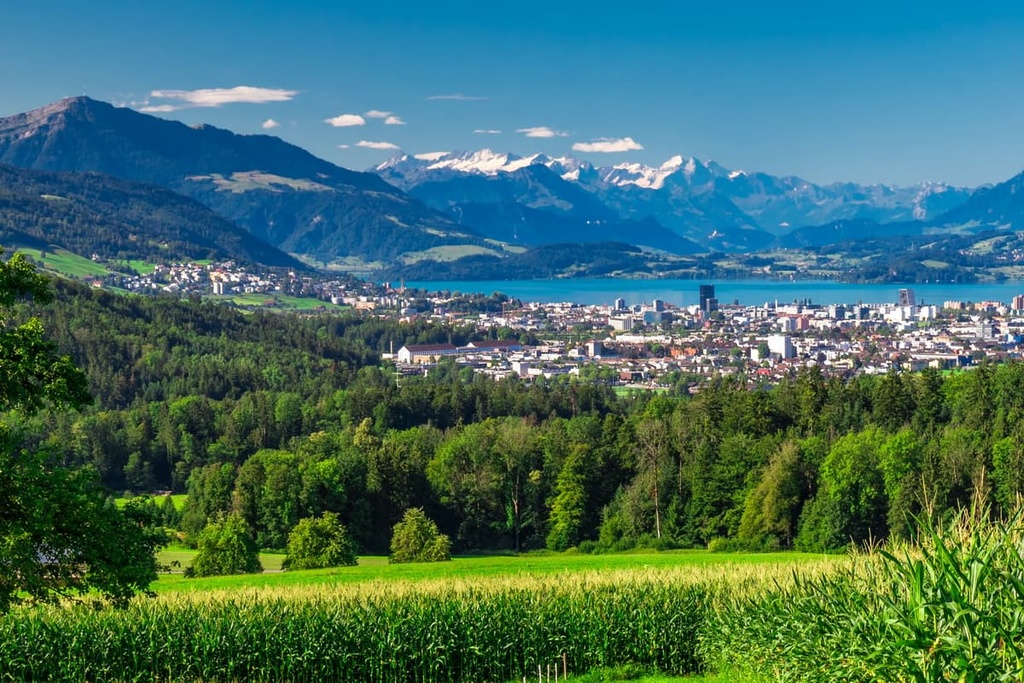 The canton of Zug (Kanton Zug) is situated in central Switzerland within the foothills of the Alps. Zug encompasses 239 sq. km (92 sq. mi) of terrain and shares borders with the cantons of Lucerne, Aargau, Zurich, and Schwyz.

A majority of the Zug’s borders were determined by the surrounding natural landscape. The eastern border is marked by the Sihl and Biber rivers along with the Höhronen ridge. The Rossberg massif lies along the southern boundary with the Reuss and Rooterberg massifs in the west.

The lowest point of elevation within Zug is at Rüssspitz, which marks the confluence of the Reuss and Lorzen rivers.

While there are many trails that wind throughout the canton, there are relatively few parks and protected areas in Zug due to its small size.

However, there are a number of parts located nearby, such as the Wildnispark Zürich Sihlwald, which lies just to the north of the canton and both Aargau Jura Park and Thal Nature Park, which are situated to the northwest. Lake Thun - Hohgant Nature Park also lies to the southwest of Zug.

Zug encompasses the southern edge of the Swiss Plateau and the foothills of the Alps. The northwestern region of the canton is relatively flat, similar to much of the plateau. The Swiss Plateau began forming around 60 million years ago and today covers around 30 percent of the country.

The southeastern portion of the canton is marked by the rugged and steep foothills of the Schwyz Alps, which are a subrange of the Alps. These peaks, along with the rest of the Alps, began forming around 65 million years ago.

The range was formed during the Alpine orogeny, a major mountain building period that also formed the Pyrenees, Himalaya, Karakoram, Caucus, Atlas, Carpathians, and the Hindu Kush.

During this time, the ancient Tethys Ocean lay between the supercontinents of Gondwana and Laurasia. As the tectonic plates underlying these supercontinents drifted toward each other and collided, the ocean retreated, leaving behind copious sediments.

The immense pressure caused by the collision resulted in recumbent folds, which thrust the landmass upward, forming both the plateau and the Alps. The sandstone and limestone that was once the ocean floor was transformed into the rugged range and the peaks that are seen throughout the canton to this day.

Millions of years of erosion carved out the steep mountains, further filling in the plateau. During the last glacial maximum, the landscape was covered by vast glaciers. Glacial retreat further carved out the landscape, leaving behind steep foothills, sweeping valleys, and numerous lakes.

Though the canton of Zug is relatively small in area, it is home to a wide variety of both flora and fauna. Some of the most common tree species found through the canton include silver fir, European beech and Sycamore maple.

The lower elevations in Zug provide the ideal habitat for Norway spruce. Patches of these spruce trees are common along the shores of the major lakes. Both tilia and oak trees are common near the towns and municipalities of the region.

Wildflowers can be found throughout the canton, too. Some of the most popular species include the fragrant orchid, monk’s hood, common heather, gentian, germander speedwell, and silver thistle.

Popular birds found throughout the canton include the golden eagle, great egret, black redstart, and Eurasian sparrowhawk. The lakes within Zug are home to European perch, brown trout, and chub.

Human settlements in the region date back to 14,000 BCE. Zug is also home to traces of settlements from the Paleolithic and Mesolithic periods.

During the Neolithic and Bronze Age (5,500–850 BCE), there were approximately 50 villages featuring stilt houses around Zugersee. Various cultures such as Cortaillod, Pfyn, Horgen, Bell Beaker, and Corder Ware, have been discovered throughout the region.

During the Roman conquest, the settlements in what is now Zug continued to grow. Though a relatively small region, it is estimated that there were ten villa rusticas (Roman farmhouses) within Zug. The region was incorporated into the Frankish Empire in 536 CE, after the fall of the Roman Empire.

Numerous parish churches were established in Zug in the following centuries as populations continued to grow. The city of Zug would later be established during the thirteenth century along the shores of the Zugersee.

The southern shores of Ägerisee mark the battlegrounds of the Battle of Morgarten where the Habsburgs were defeated in 1315. Inhabitants of the region opposed the 1798 French Invasion until the Ancien Regime collapsed.

Zug was once part of the canton of Tellgau and would later become part of Waldstätten during the rule of the Helvetic Republic. Waldstätten was a large canton which also encompassed the present day cantons of Lucerne, Schwyz, Obwalden, Nidwalden, and Uri.

The Act of Mediation in 1803 reestablished Zug’s independence as a canton. Zug became a member of Sonderbund in 1845, who lost the war with the Swiss confederation in 1847.

Today Zug’s economy is based on both financial and trade services, including the manufacturing of electrical equipment and metal goods.

Zug is home to numerous trails for hiking and outdoor recreation. Here are some of the most popular trails and regions in the canton to check out.

The Zugerberg Rundweg loop trail is a popular route within the canton. The trail leads hikers up to the summit of Zugerberg which stands at 1,039 m (ft) above sea level.

From the top of the peak, hikers are given stunning views of Zugersee and the other surrounding mountains. The route is 9 km (5.7 miles) long and it has 232 m (761 ft) of elevation gain. This relatively flat trail can be completed during the winter months by using snowshoes.

The loop trail is 11 km (6.8 miles) long round trip with 839 m (2,752 ft) of elevation gain. On this trail, forested hillsides give way to mountain pastures near the summit, providing the ideal spot to take in the views and enjoy a mid-hike snack. The route also leads to the summit of Gnipen.

The Zugersee Trail is a loop route that encompasses the entirety of Lake Zug, which happens to be the tenth largest lake in the country. The route is 38.6 km (24 miles) in length and it has 425 m (1,394 ft) of elevation gain.

Parts of the route follow along the main road that leads around the lake, with small sections featuring a more wooded setting. This unique route offers visitors views of the Zugersee, the surrounding mountains, and a chance to explore the various towns along the shores of the lake.

Looking for a place to stay near Zug? Here are some of the best cities and villages to check out in the region:

Zug is the capital and largest town of the canton of Zug. The town is home to 31,000 residents and is situated along the shores of Zugersee. Nestled between the pristine lake waters and the Schwyz Alps, Zug is surrounded by stunning natural beauty.

The old town of Zug features a network of narrow and historic streets while the Zytturm clock towers high above. Other sites in the old town include the late Gothic town hall and St. Oswald’s church.

The Landsgemeindeplatz is the main square on the lake shores, providing both locals and tourists with stunning views of the surrounding landscape. During the winter months, the local mountain Zugerberg comes alive as a place for winter hiking and cross country skiing. During the summer months, hikers can cool off from a hike by swimming in the Zugersee.

Situated near major roadways and trains, Risch can act as a gateway to the rest of the country. Across the lake, you can enjoy unobstructed views of the Alps and easy access to Lake Lucerne.

The quaint downtown area of Risch features local shops and restaurants, many featuring views of the lake. Nearby hiking and biking trails also offer visitors a more relaxed setting for exploring the canton of Zug. 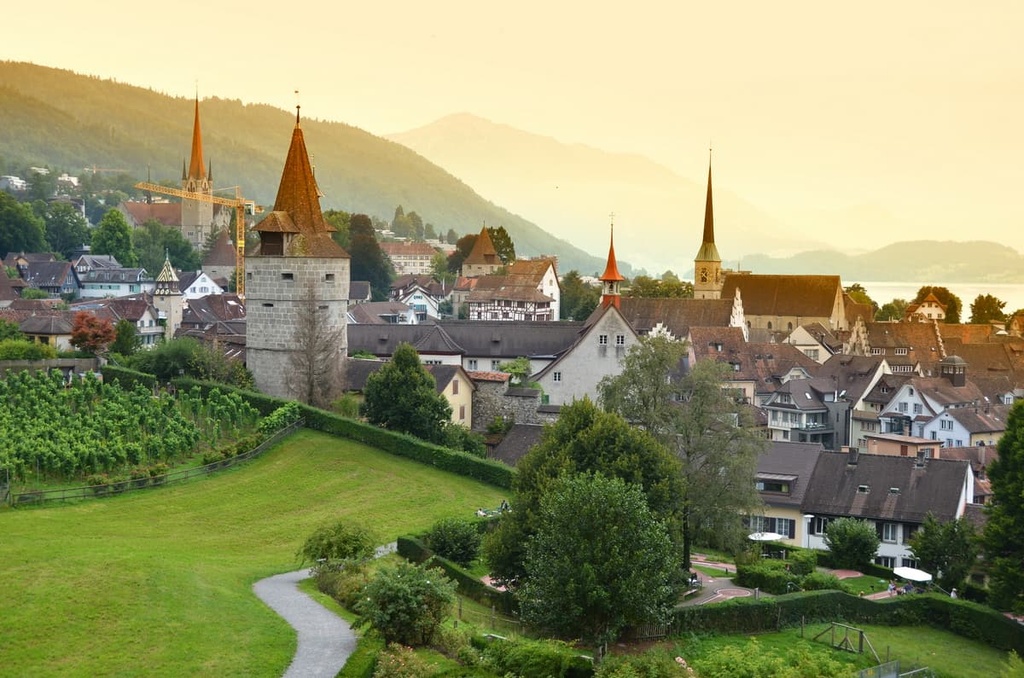 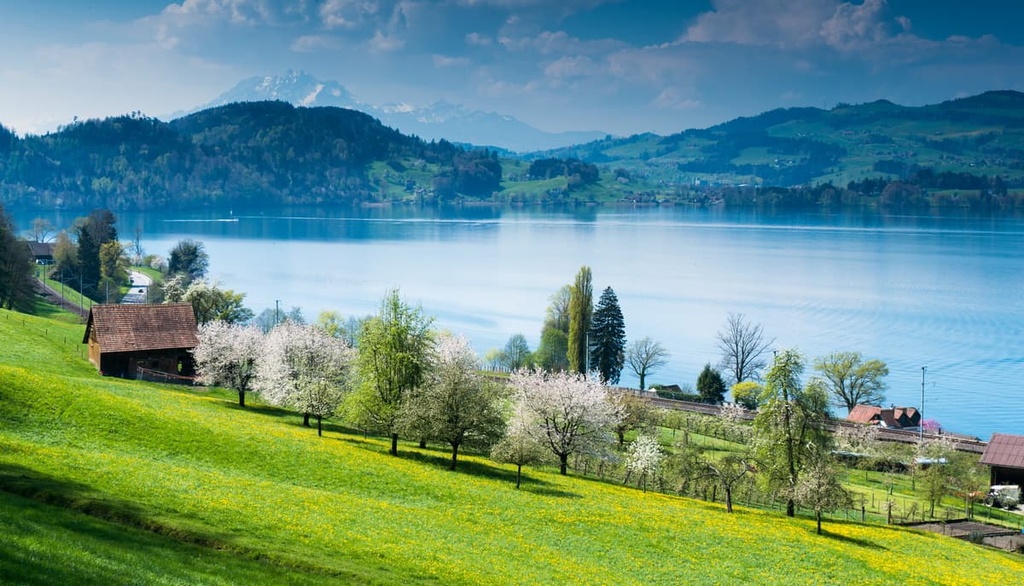 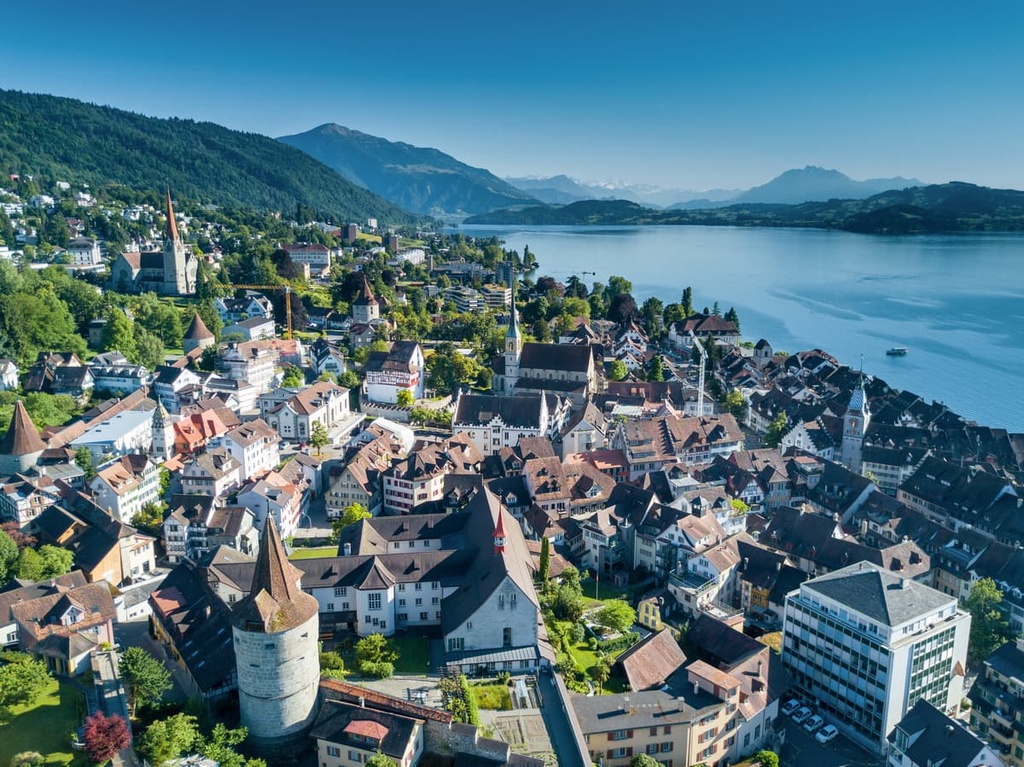 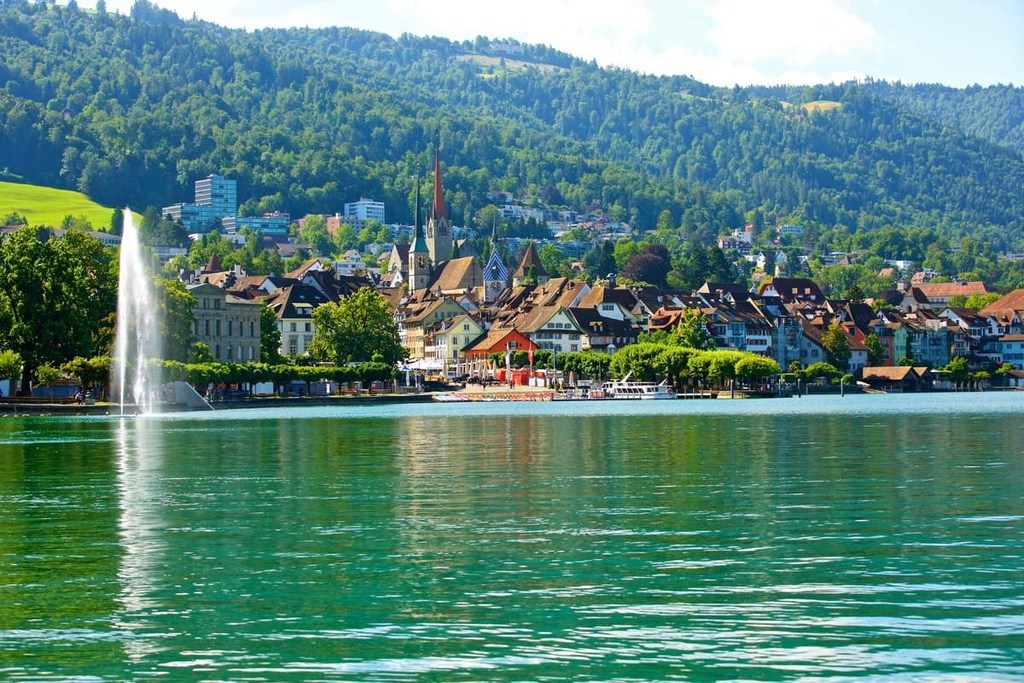 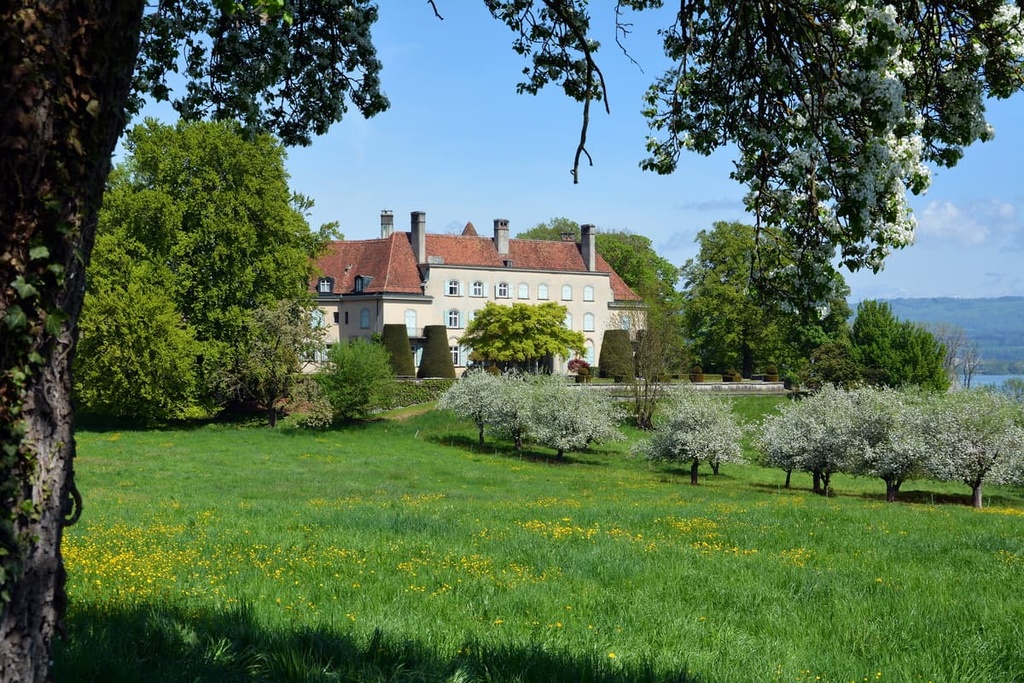