Zürich Wilderness Park (German: Wildnispark Zürich Sihlwald) is a wilderness park located in central Switzerland, near the city of Zürich. The park features the Sihlwald, the largest continuous forest on the Swiss Plateau. There are 9 named mountains within the park. The tallest and most prominent peak in the park is Bürglenstutz at 915 m (3,002 ft) in elevation and with 374 m (1,227 ft) of prominence. 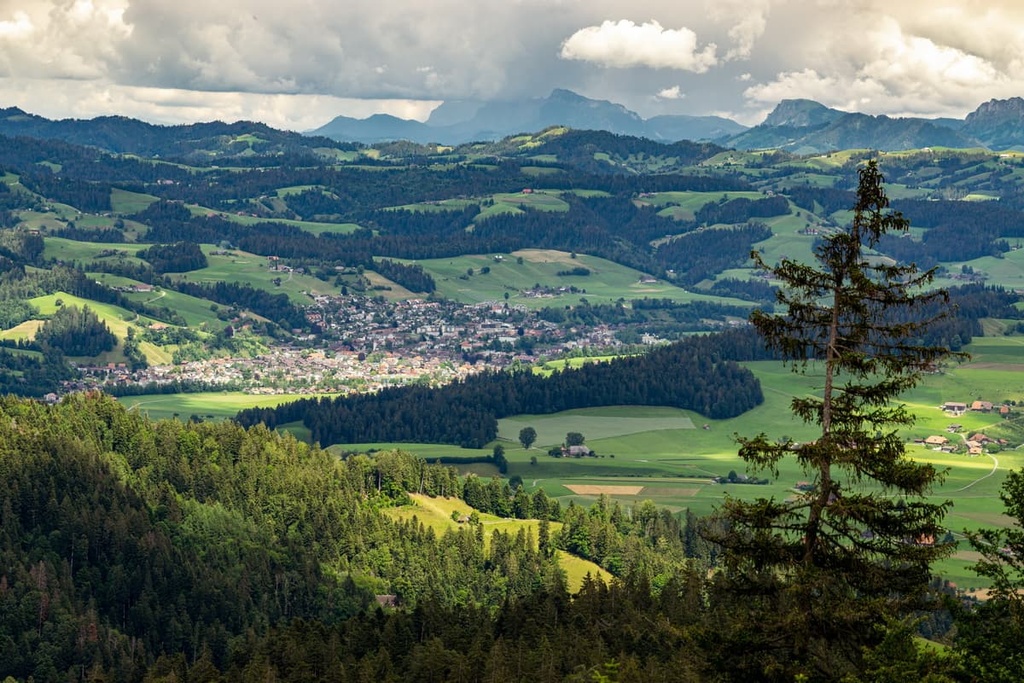 The landscape of the wilderness park features rolling hillsides with the Sihl river cutting through the terrain from south to north. The named peaks in the park are primarily found on the western side of the Sihl, as a flatter landscape marks the eastern portion of the park.

Zürich Wilderness Park is made up of two distinct regions; the Sihlwald forest and the Langenberg Wildlife Park. Together these two sites mark the boundaries for the park.

Sihlwald is the largest continuous forest found on the Swiss Plateau. The forest lies on the eastern slopes of the Albis hills, just to the west of the Sihl river. The named peaks in the park can be found in Sihlwald. Streams run through the densely forested landscape which has not been used for timber since the 1990s.

The Langenberg Wildlife Park lies in the Sihl Valley on the eastern side of the park. The landscape features forests that are intermixed with open fields. Though maintained, this portion of the park is designed to provide wildlife with a realistic and habitable setting.

Zürich Wilderness Park is situated near the southern edge of the Swiss Plateau within central Switzerland. The foothills of the Alps lie directly to the south of the park.

The relatively flat landscape of the park is consistent with much of the rest of the plateau. The Swiss Plateau covers around 30 percent of the country, and it began forming around 60 million years ago.

The peaks that are located just to the south of the park are part of the Schwyz Alps, a subrange of the Alps. Similar to the plateau, the Alps also began forming around 60 million years ago.

Both the plateau and range were formed during the Alpine orogeny. This major mountain building period also formed the Pyrenees, Himalaya, Karakoram, Caucus, Atlas, Carpathians, and the Hindu Kush.

During this time, the ancient Tethys Ocean was located between the supercontinents of Gondwana and Laurasia, which roughly coincide with present day Africa and Europe. These two tectonic plates began to move toward one another, forcing the ocean to retreat.

As the two plates collided with one another, the remains of the ocean floor were compacted, folded, and thrust upward. This immense pressure would go on to form both the plateau and the Alps.

The plateau and nearby foothills consist primarily of limestone and sandstone. The Swiss Plateau was flooded and covered by a shallow sea, which later retreated, leaving behind more mineral sediment.

Vast glaciers covered much of the region during the last glacial maximum. Glacial retreat further carved out the vast plateau, including its sweeping valleys and its rugged summits. The rolling hills within the park showcase the transition between these two distinct geological landscapes.

The Sihlwald within Wildnispark Zürich showcases a dense forested landscape, similar to the forests that once covered much of Europe. The dominant tree species here is beech, though other parts of the park are also home to Norway spruce.

Meanwhile, Langenberg Wildlife Park features a zoo that is home to animals that are native to the region, including species that have been locally extirpated. Some of these animals include the European brown bear, fallow deer, Alpine ibex, European moose, red fox, red deer, Eurasian lynx, Przewalski’s horse, European bison, and Eurasian wolves.

The surrounding landscape is home to various species of deer, wild boar and a multitude of birds such as the Eurasian jay, gray heron, and white-throated dipper. During the warmer months, the park is home to a variety of both butterflies and dragonflies.

Human settlements date back to the Neolithic and Bronze Age around Lake Zürich. During Roman times, the population in the region steadily began to grow.

The first record of the city in present day Zürich, dates back to the second century CE. After the fall of the Roman Empire, the Germanic Alemanni tribe began settling throughout the Swiss Plateau, including around present-day Zürich.

Louis the German (Louis II of Germany) established the Fraumünster Abbey and endowed the lands of present day Zürich, Uri, and the Albis forest. Zürich became an Imperial free city in 1218 following the end of the Zähringer family line.

The Sihlwald was given to the city of Zürich as a gift in 1309 from the Hapsburgs. In 1351, Zürich joined forces with other cantons and became part of the Swiss Confederacy.

Throughout the sixteenth and seventeenth centuries, the region became more isolationist and began constructing more walls surrounding the city. From 1798 to 1803, the region was under the rule of the Helvetic Republic.

The Langenberg Wildlife Park was founded in 1869 by the city forester at the time, making it the oldest Swiss wildlife park. The wildlife park and Sihlwald were merged together in 2009 in order to form Zürich Wilderness Park.

Each year, the park receives over half a million visitors who come to explore the different features of the region through hiking, biking, and various outdoor educational events.

Zürich Wilderness Park is home to numerous trails for hiking and outdoor recreation. Here are some of the most popular trails in the park to check out during your next visit.

The Sihlbrugg - Ebertswil loop trail starts in the village of Sihlbrugg, which serves as an important junction between the cantons of Zug and Zürich. Situated within the park, the village lies along the Sihl River.

The loop trail is 6.4 km (4 miles) in length and it has 345 m (1,131 feet) of elevation gain. It takes hikers through the Sihlwald, which features a forested landscape, flowing streams, and views of Lake Zürich at the top. The turn-around point of Ebertswil provides views and a spot to enjoy refreshments along the way.

The Sihlwald via Horgen Tüfenbach trail offers visitors views of the entire park. The loop route is 32 km (19.7 miles) in length and it features 1,113 m (3,651 ft) of elevation gain. Beginning near the shores of Lake Zurich, the route travels south before entering the park near the southern boundary.

Once in the park, the trail follows along the Sihl River before climbing into the Sihlwald and traversing to the northern edge of the park. Though longer than other routes, this loop provides hikers with stunning views of the entire park.

The Sihlbrugg - Albishorn - Langnau route is a point-to-point trail that begins in the southern end of the park along the western banks of the Sihl River. The trail is 12.2 km (7.6 miles) in length and it features 603 m (1,978 ft) of elevation gain.

The trail climbs into the forested landscape before traveling north along the western border of the park. From this higher vantage point, hikers can look down over the park with views of Lake Zürich.

Looking for a place to stay near Zürich Wilderness Park? Here are some of the best cities and villages to check out in the region:

The city of Zürich lies in the northern part of the park at the northern tip of Lake Zürich. The city is the largest in the country, and it is the capital of the canton of Zürich. Home to around 435,000 residents, the city is a hub for transportation throughout the country.

Zürich is known throughout the world for being a financial center, and it is home to many banking companies and financial institutions. The city features over 50 museums and 100 art galleries, each of which offers a look back at the rich history of both the city and the country as a whole.

The Old Town district of the city is a hub for tourists and is also a Swiss Heritage Site. Situated up on a hill, the old town offers stunning views of the rest of the city and Lake Zürich. A lack of high-rise buildings helps the city maintain its stunning architecture. Well known churches to visit in the city include Grossmünster, Fraumünster, and St. Peter.

The town of Horgen lies along the western shores of Lake Zürich, just to the east of the park. With a population of around 18,000 people, the town offers picturesque solitude. It is also situated close to the big city, so there’s a lot to love about Horgen. As it is located on the edge of the Swiss Plateau, Horgen is also a gateway to the Alps which lie to the south.

The main street of Horgen is part of the city’s historic town center. The streets here are lined with local shops and restaurants, which make Horgen’s car-free pedestrian zone a great place to wander around. The city of Zürich is also just a quick drive, train, or boat ride and it offers easy transportation links to the rest of the country. 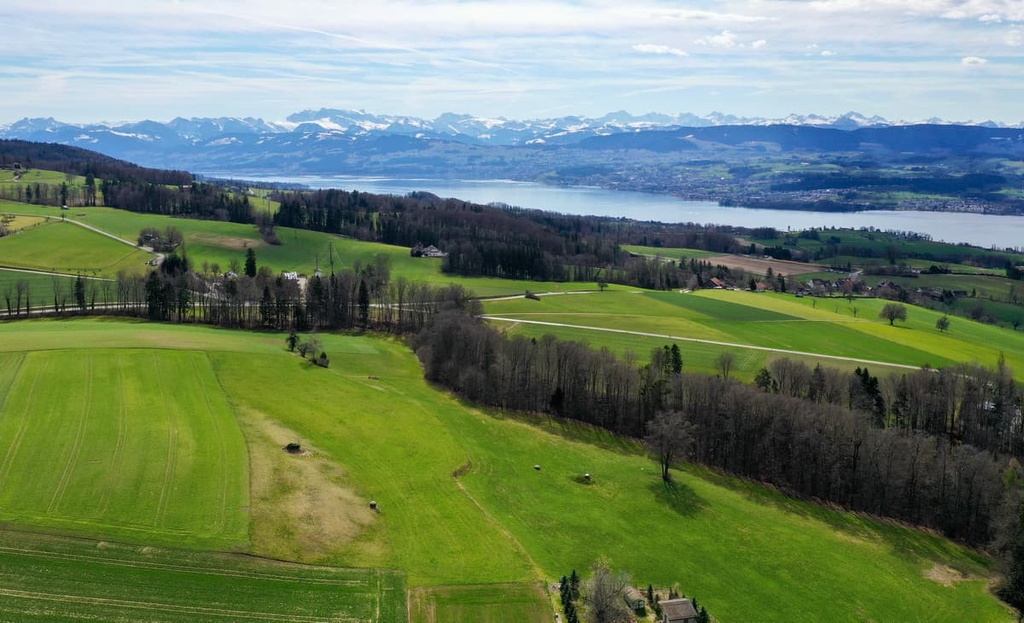 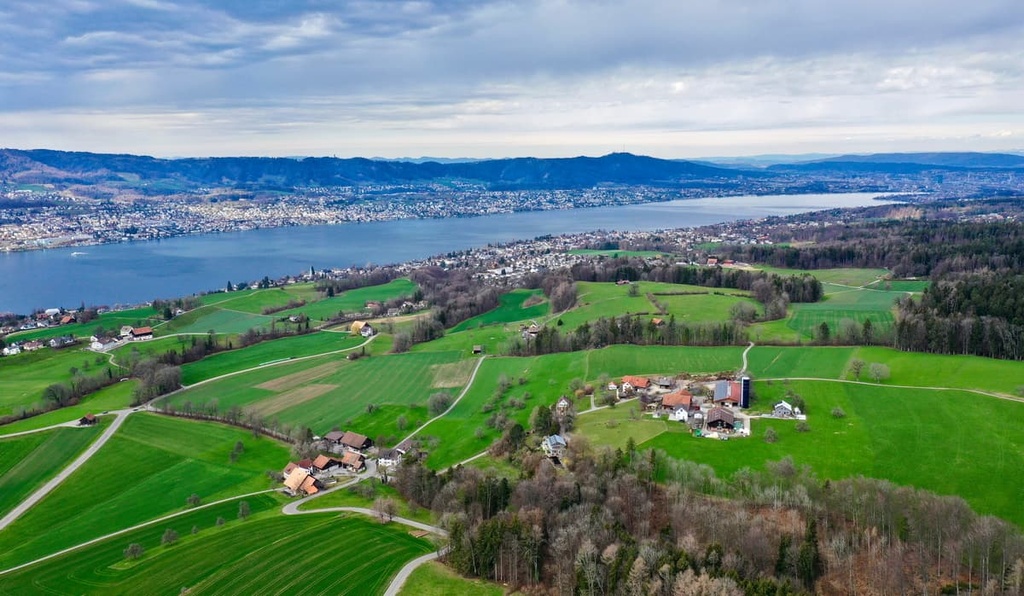 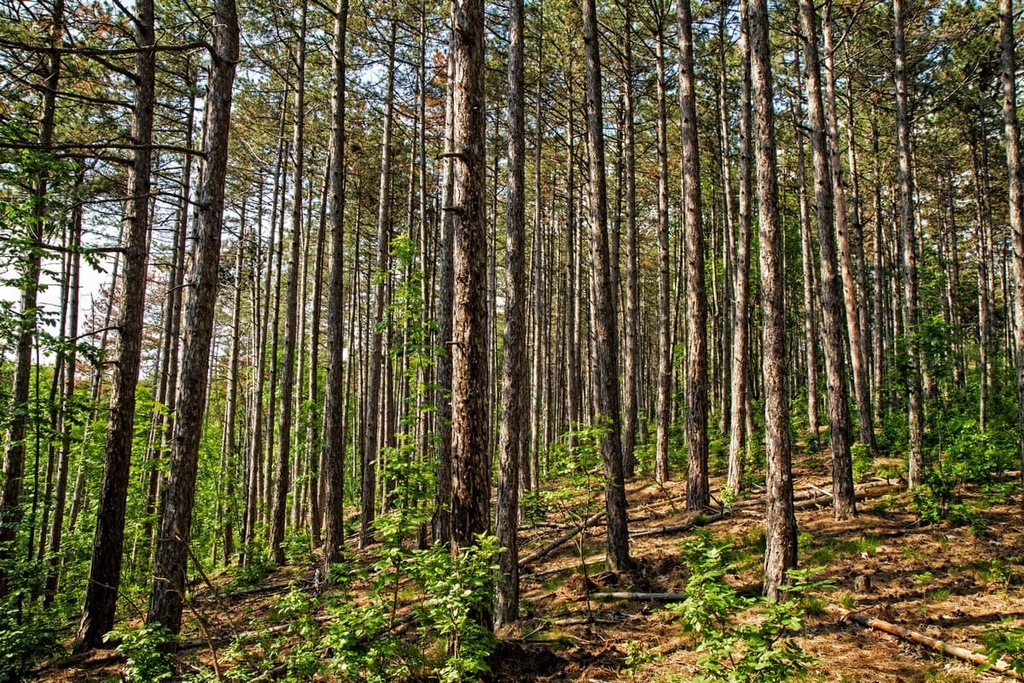 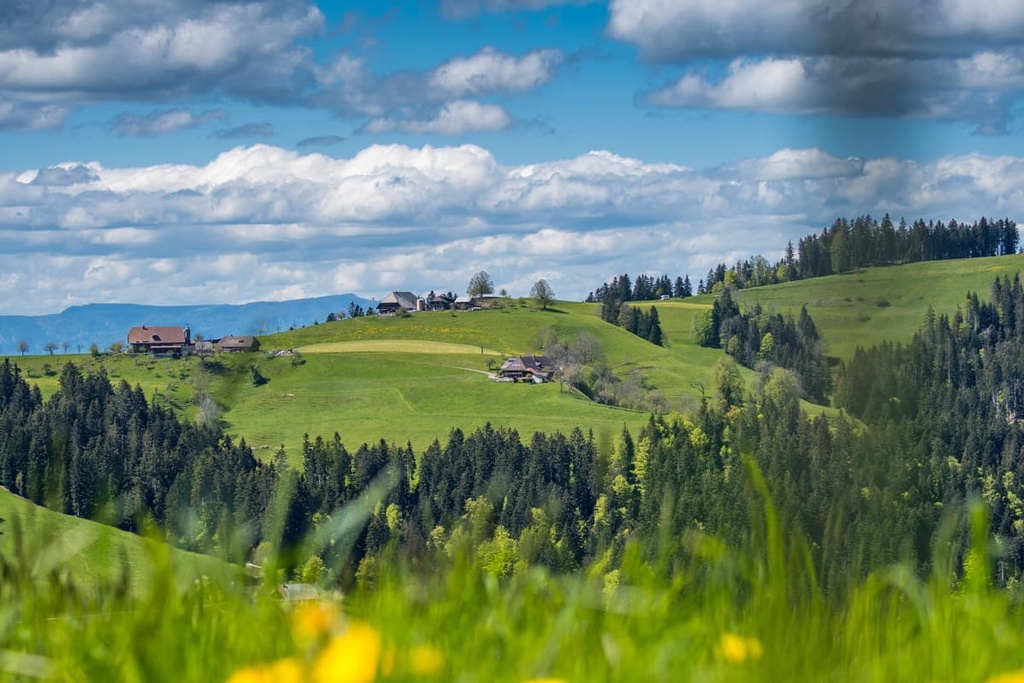 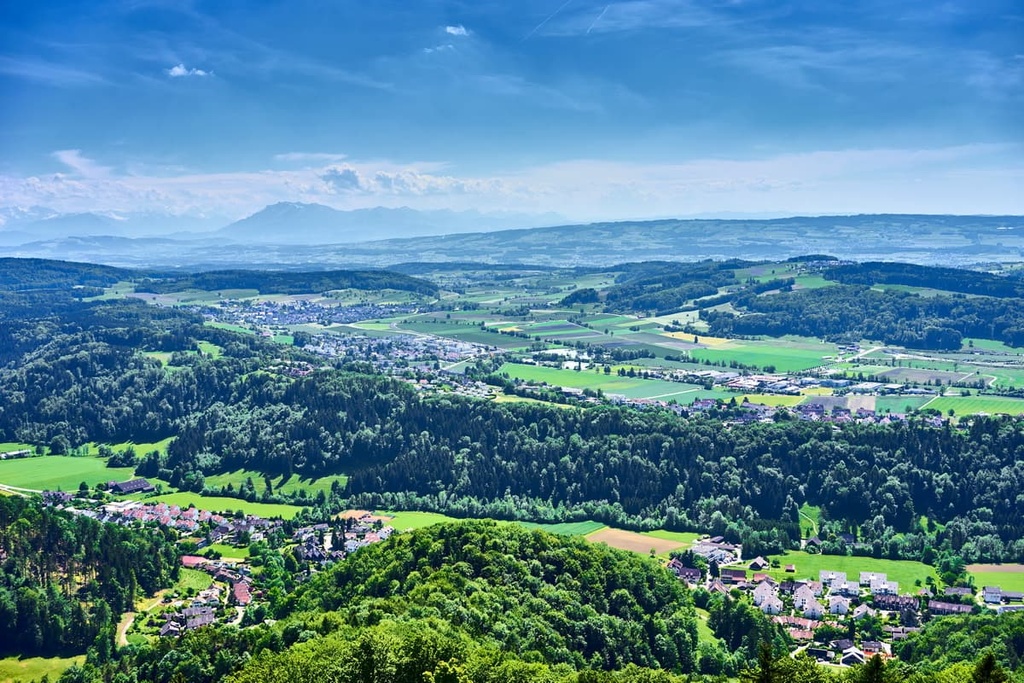 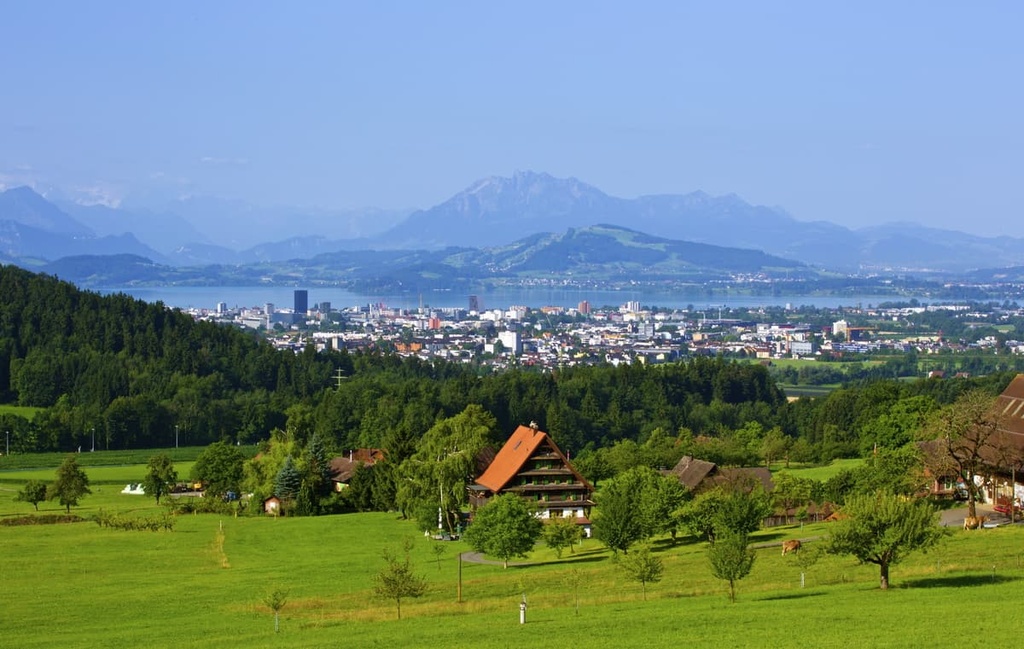