Located in the US state of Arizona, the White Mountains are a group of 227 summits that lie mostly within the boundaries of the Fort Apache Reservation. The highest and most prominent point in the range is Mount Baldy (11,421 ft/3,481 m). 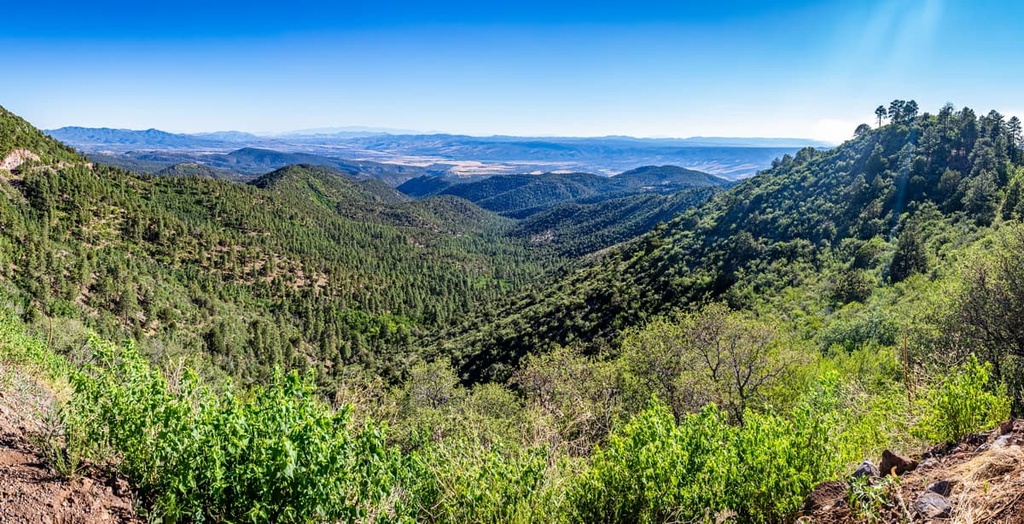 The White Mountains are located in Arizona’s Transition Zone, a northwest-trending escarpment of mountainous terrain bounded by the Colorado Plateau to the north and the Great Basin to the south. As such, the White Mountains share many topographic and geologic characteristics with both regions.

Several prominent mountain ranges and peaks lie in the Transition Zone alongside the White Mountains, including the Mazatzal Mountains, Santa Maria Mountains, and Sierra Ancha. The Gila Mountains of Graham County and Black Hills of Greenlee County border the White Mountains to the south. To the east, the Sierra Aguilada Mountains extend for roughly 15 miles (24 km) through southwest New Mexico.

The White Mountains also serve as the western extension of the Mogollon Rim, a prominent escarpment of the Colorado Plateau that stretches 115 miles (185 km) from northern Yavapai County eastward before terminating near the New Mexico border.

Most of the White Mountains lie within the 1.6-million-acre (647,500 ha) Fort Apache Reservation. But parts of the range also extend into the Apache-Sitgreaves National Forests.

To the south and southwest of the Apache-Sitgreaves National Forests, the Tonto National Forest abuts the Mogollon Rim and protects 2,873,200 acres (1,162,700 ha) of varied terrain.

Meanwhile, to the north of the White Mountains, Petrified Forest National Park protects 200,000 acres (81,000 ha) of the Colorado Plateau. This region of Arizona is largely characterized by deeply etched plateaus and tablelands that are dissected by the Colorado River and its tributaries.

The White Mountains lie within a narrow band that separates two contrasting geomorphic provinces, the Colorado Plateau and the Great Basin. This region, referred to as the Transition Zone, has experienced extensive volcanism and tectonic extension in the past, both of which have contributed to the complex topography and natural features observed in the area today.

The White Mountains region is widely believed to be the remnant of the middle Tertiary-aged Mount Baldy Volcano. As such, the range is characterized by irregular topography and it is home to cinder codes, lava-capped mesas, and deep canyons, all of which formed during the late Tertiary and Quaternary.

Volcanic activity dominated eastern Arizona and western New Mexico between the Eocene and Oligocene, about 34 to 24 million years ago. About 9 to 2 million years ago, molten rock and ash from eruptions in the White Mountains region filled deep valleys and constructed the Mount Baldy stratovolcano. Mudflows and sediment were subsequently transported and deposited over the surrounding landscape.

Today, most of the volcanic landforms of the White Mountains Volcanic eruptions have been weathered away by erosion or covered by more recent (3 million to 300,000-year-old) eruptions in the Springerville Volcanic Field. Mount Baldy, the tallest peak in the range, is the most prominent remnant of the region’s extensive volcanic past.

Though no glaciers remain on Mount Baldy today, geologists also theorize that at least four periods of glaciation occurred in the White Mountains during the late Quaternary period. Extensive glaciation cut broad valleys into the northwestern, northern, and eastern slopes of Mount Baldy.

The White Mountains lie in the Arizona/New Mexico Mountains ecoregion, which stretches across Arizona, central and northwestern New Mexico, and parts of southwestern Colorado. Topography in the region is mostly dominated by steep foothills and mountains with some deeply dissected high plateaus.

Forests of spruce and Douglas fir, like those found in the Southern Rockies and the Wasatch Range, are also found in the region. Other characteristic trees that you’ll see in the range include Chihuahua pine and Apache pine.

The White Mountain Apache Tribe was also the first tribe in the area to officially facilitate the recovery of the Mexican gray wolf, which had been extirpated from the southwest US by the 1970s. Today, Tribal lands protect and preserve five federally listed species: Apache trout, Mexican spotted owl, Mexican wolf, bald eagle, and loach minnow.

The White Mountains are the native homeland of the White Mountain Apache Tribe, a traditionally nomadic people who were known to travel widely throughout east-central Arizona.

The easternmost band of the Western Apache, the White Mountain Apache are related to other Apache nations, including the Chiricahua, Mescalero, Jicarillo, Lipan, and Kiowa-Apache peoples. However, each Tribe has its own dialects as well as its own history and culture.

However, when a group of US military men, led by Captain John Barry, arrived in what they referred to as “Miguel’s Village,” they were met with hospitality. White Mountain Apache leaders agreed to allow the US military to establish Camp Ord, which would later be renamed to Fort Apache, at the confluence of the East and North Forks of the White River.

Mount Baldy, the tallest peak in the White Mountains, lies along the eastern edge of the White Fort Apache Reservation. Mount Baldy is a sacred mountain to many local Tribes, and it is part of a designated Tribal Wilderness. Non-tribal members are not allowed to summit the peak without express permission of the Tribe.

There are many miles of scenic hiking trails in the White Mountains of Arizona. These are some of the top hiking areas to visit in the range.

In 1987, the White Mountains Trail System was established to preserve non-motorized trails for recreation in the White Mountains region. Today, the trail system consists of over 200 miles (322 km) of multi-use trails stretching from Pinetop-Lakeside to Show Low.

Trails in the system range anywhere from 8 to 16 miles (13 to 26 km) in length and can also be modified to accommodate various skill levels, abilities, and adventure styles. Popular trails include the Land of the Pioneers, Timber Mesa, Buena Vista, and Show Low Bluff.

If you’re looking for somewhere to stay during your visit to the White Mountains, these are some of the best nearby cities to check out.

Located at over 6,900 feet (2,100 m) above sea level in the White Mountains, Springerville and its neighboring community, Eager, form what is known as Round Valley. Rich in history and natural beauty, Springerville is a community that aims to connect people to the outdoors.

Springerville is a popular destination for those looking to explore the nearby Apache-Sitgreaves National Forests as it is centrally located to many of the region’s most popular hiking trails.

Located on Arizona’s Mogollon Rim, the town of Show Low is an excellent basecamp for adventuring the great outdoors.

Visitors to Show Low can easily access more than 25 miles (40 km) of the White Mountain Trail System. They can also kayak and fish in nearby Fool Hollow Lake Recreation Park or simply spend the day browsing the city’s many boutique stores, cafes, and restaurants.

Show Low is also centrally located to Sunrise Park Resort, one of the most popular ski areas in the southwest.

Idyllically located at an elevation of 7,000 feet (2,133 m), Pinetop-Lakeside is surrounded by the White Mountains, Apache-Sitgreaves National Forests, and Fort Apache Reservation.

Located near the White Mountain Trail System, Pinetop-Lakeside is within driving distance of more than 50 alpine lakes and 800 miles (1,287 km) of crystalline rivers and springs, making it a popular summer destination for hiking, biking, hunting, and fishing. The city is also home to a variety of shops, restaurants, and it offers a wide variety of lodging options to choose from. 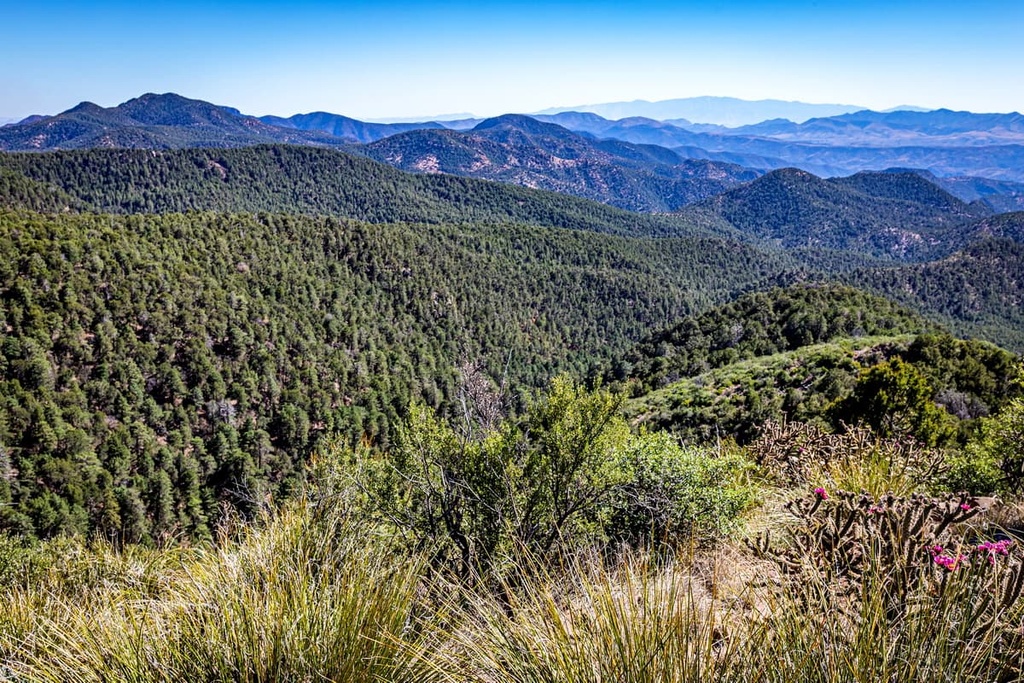 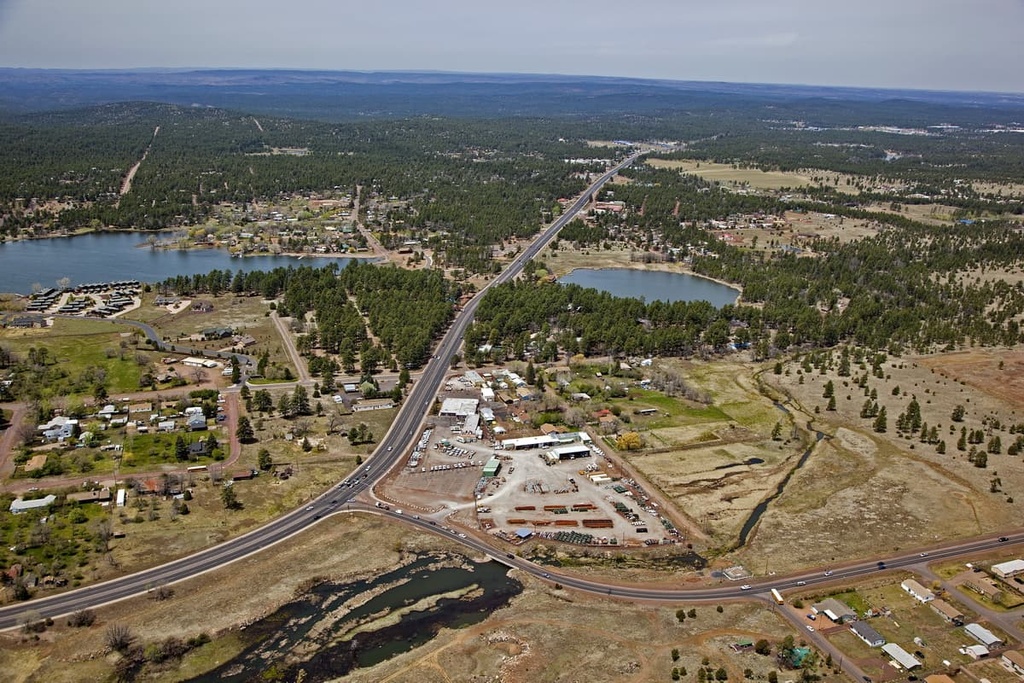 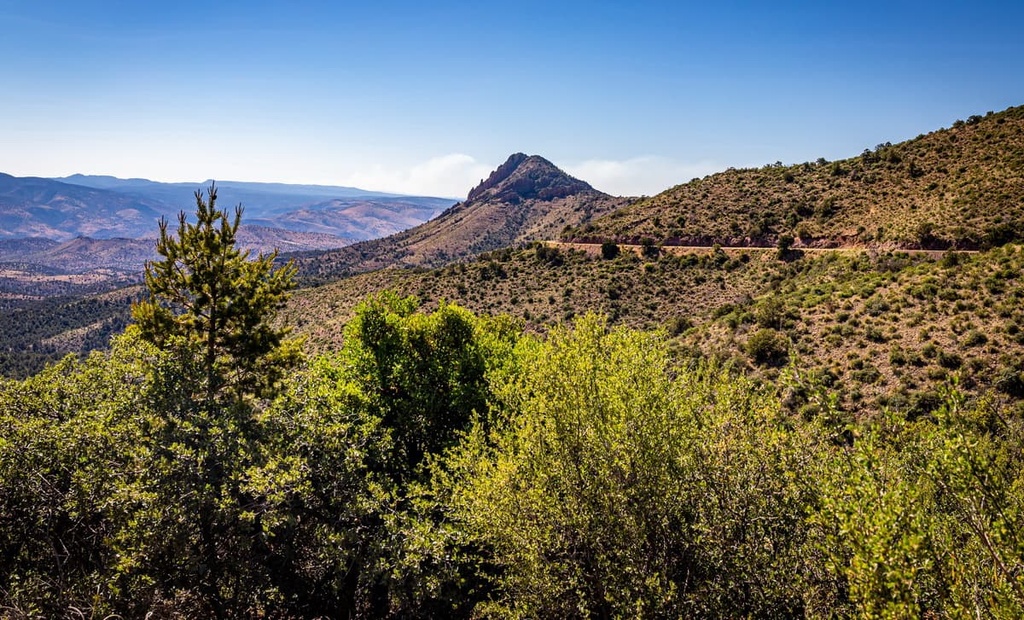 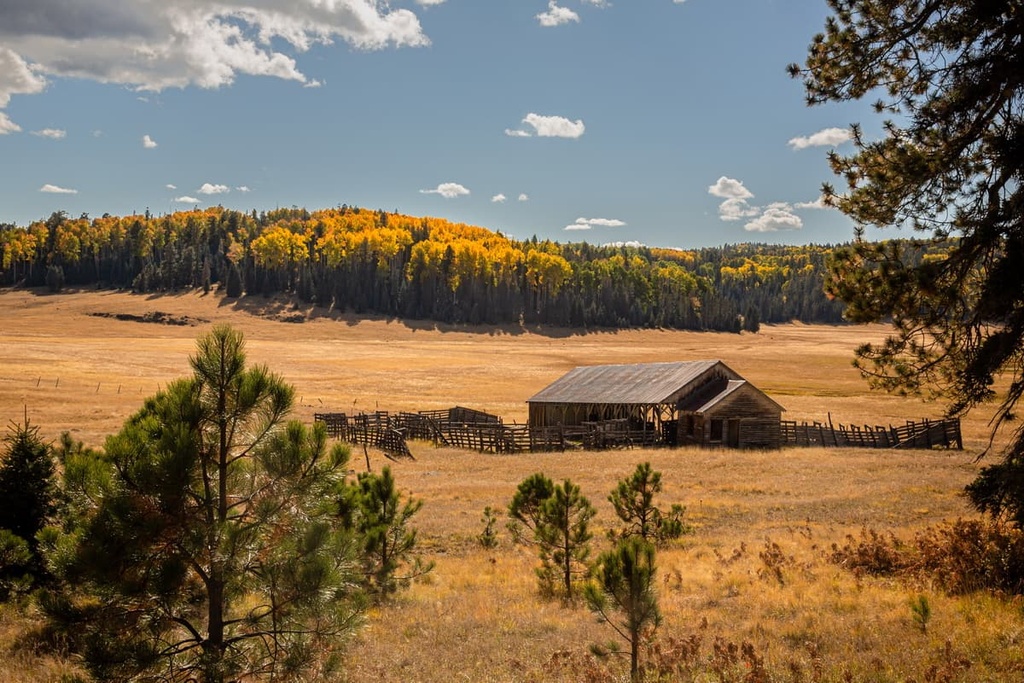 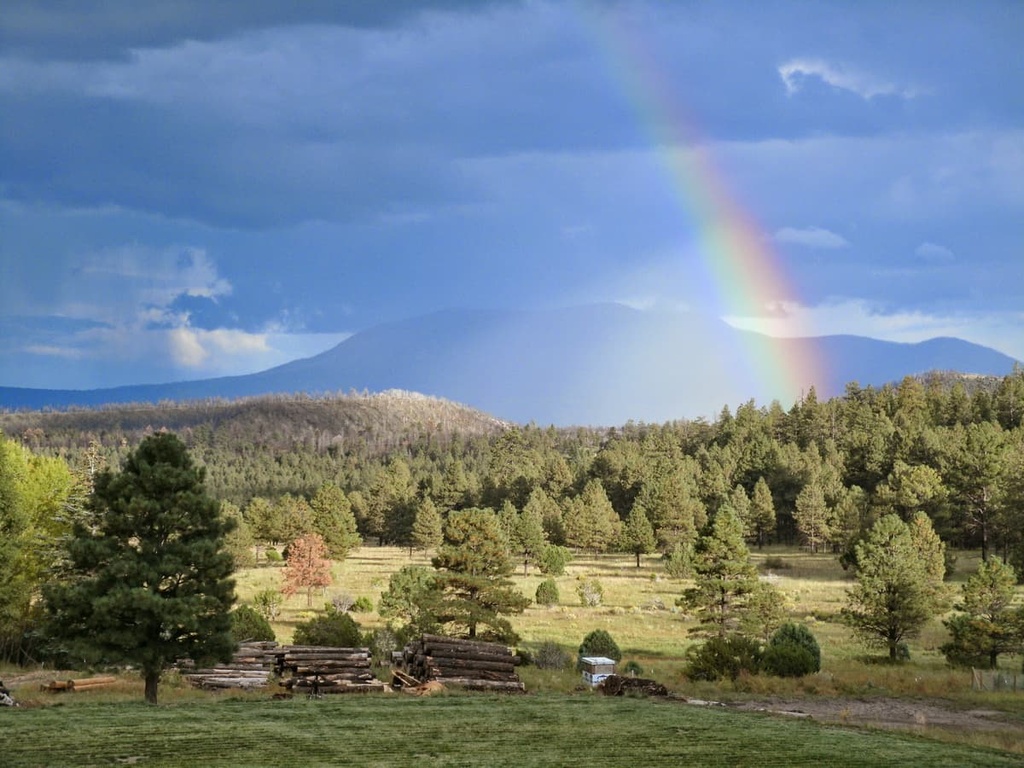 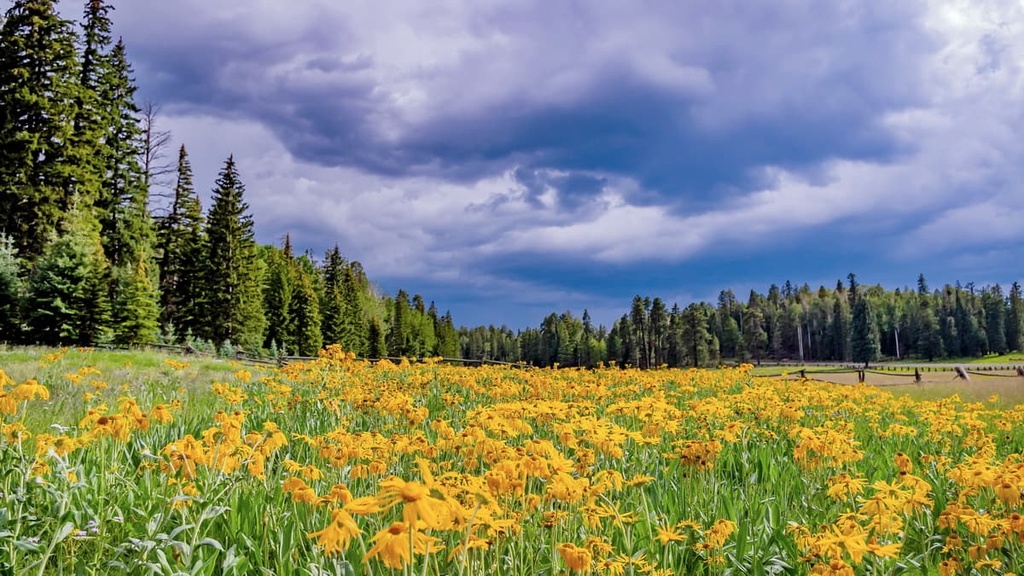