Tonto National Forest is a protected nature reserve located in the state of Arizona within the United States of America. The expansive forest is known for being the fifth largest forest within the entire country. Tonto National Forest contains 428 named mountains, the highest of which is Promontory Butte (7,969 ft/2,428 m) and the most prominent of which is Pinal Peak (7,848 ft/2,392 m) 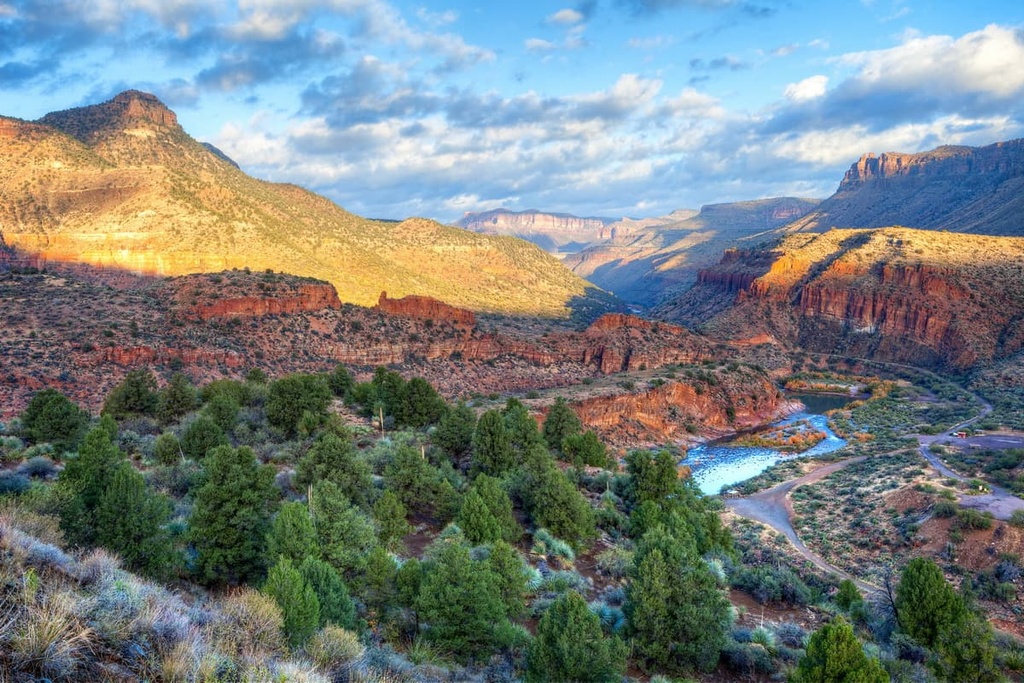 Tonto National Forest is situated in central Arizona. The forest contains a diverse range of landscapes throughout its 4,490 sq. mi (11,627 sq. km) area. It is also the largest national forest in the state. Elevations in the forest range from 1,400 ft (427 m) up to the summit of Promontory Butte.

Major features within the forest include the Sonoran Desert and the forests along the Mogollon Rim. The desert is found at lower elevations in the forest and receives minimal rainfall throughout the year. These flatlands slowly transition into the Mogollon Rim, which is home to some of the highest peaks in the region.

While the protected area is referred to as a forest, there are vast sections that are free of tree coverage. Massive valleys span across the region with steep slopes throughout. Rugged cliffs mark the upper elevations of the peaks within the national forest while rivers and low-growing vegetation are common in the valleys.

Rugged canyons are a distinct feature of the Sonoran Desert and can be found throughout the national forest. The Salt and Verde rivers also wind throughout the forest along with the Salt River chain of dams, which have created a series of artificial lakes that can be used for recreation.

The formation of the Tonto Basin, which contains the national forest, began around 1.5 to 2 billion years ago. Vast seas once covered present day Arizona, leaving behind sedimentary deposits.

During the Mazatzal Revolution, the region was lifted and folded by the shifting of tectonic plates. Many of the limestone rock deposited by the Paleozoic seas eroded into a relatively flat plain. Around 10 to 30 million years ago, massive shifts in the Earth’s crust led to some of the plain being abruptly uplifted, creating some of the larger valleys that are apparent today.

Major waterways, including the Salt River, further carved out the region. The Salado cliff dwellings that are located in the forest were made possible by the substantial erosion that took place in the region starting around 400,000 years ago.

Tonto National Forest is home to a wide range of both flora and fauna. Throughout the forest, there are black bears, coyotes, bobcats, cougards, ring-tailed cats, racoons, elk, white-tailed deer, pronghorns, and even javelinas.

The forest is also home to a wide range of plants ranging from cacti to wildflowers. Numerous species of cacti and succulents thrive in the region due to the minimal amounts of rainfall in the desert. Fishhook barrel cactus, cholla cactus and prickly pear cactus are all succulent species found in the national forest. You can also see agave, sotol, and banana yucca in the desert landscapes of the region.

Trees and shrubs found in the national forest include the Arizona sycamore, Arizona walnut, brittlebush, creosote, and desert willow, among others.

The land surrounding Tonto National Forest has a long history of human inhabitation dating back thousands of years. Numerous Indigenous tribes lived in the region for countless generations prior to European colonization.

Known today as the Hohokam, some of the earliest Indigenous peoples to live in the area were hunter gatherers. Over time, the communities became farmers, traders, and craftsmen. Due to the lack of rainfall in the region, the Hohokam people built hundreds of miles of irrigation canals that started from the desert’s major rivers.

During the fifteenth century CE, a lack of rainfall led the Salado, Hohokam, and other Indigenous peoples to leave the region, and many never returned. The descendants of many of these Tribes are now members of the contemporary Pima, Hopi, and Zuni tribes.

That said, the Indigenous peoples who remained in the region were forcibly removed from their native homelands with the arrival of settlers of European descent.

Following the brutal removal of the Indigneous Tribes from the area, settlers began moving into the region. Many of the first settlers were miners and Mormon missionaries. The expansive landscape soon led to the establishment of cattle and sheep ranches.

Tonto National Forest was established in 1905 in order to protect the Salt and Verde river watersheds. Today, over 25,000 cattle are allowed to graze throughout the established forest though Tonto is also managed for recreational purposes.

Tonto National Forest is home to numerous trails for outdoor adventure. Here are some of the top hiking areas to visit in the national forest:

This out-and-back trail climbs steeply up the sparsely forested slopes in the region. Jagged and craggy rock faces dominate the landscape prior to reaching the summit of the Flatiron. From the top, hikers are rewarded with panoramic views of the forest and the city down below.

Massacre Falls Trail is a popular hiking route that is 5.4 miles (8.7 km) long with 1,092 ft (333 m) of elevation gain. The trail passes through towering cacti and shrubs before climbing up to the falls. That said, due to the extreme heat and aridity, water only occasionally tumbles down the falls.

The Treasure Loop Trail is located near the southern boundary of Tonto National Forest. The loop trail totals just 2.3 miles (3.7 km) and it has 534 ft (163 m) of elevation gain.

This route offers a more casual hike while still allowing views of the stunning rock formations found in the region. Along the trail, you’ll see plenty of low-growing shrubs and cacti, which allow for panoramic vistas of the region.

Looking for a place to stay near Tonto National Forest? Here are some of the best cities and villages to check out in the region:

Located in the greater Phoenix area is the city of Mesa. The suburb lies just 20 miles to the east of Phoenix and is located just to the south of Tonto National Forest. Approximately 520,000 people live within the city limits of Mesa.

Mesa’s location allows for it to be a gateway into the vast network of national forests and parks of the region. Besides great access to the region’s parks and national forests, Mesa has a plethora of kayaking, cycling, and trail running routes in the city for visitors to enjoy.

Flagstaff is a city that’s situated just to the north of the national forest. The city has a population of around 140,000 people and is known for being an outdoor adventure paradise. Trail running and biking trails can be found within the city and its surrounding land.

Flagstaff sits at an elevation of around 7,000 feet (2,133 m) and is surrounded by one of the largest contiguous ponderosa pine forests in the entire country. The Grand Canyon lies to the northwest of the city, too, and it is a popular stop for millions of tourists each year. The downtown area of Flagstaff is equally worth a visit as it is filled with local restaurants and shops that are centered around adventuring in the outdoors. 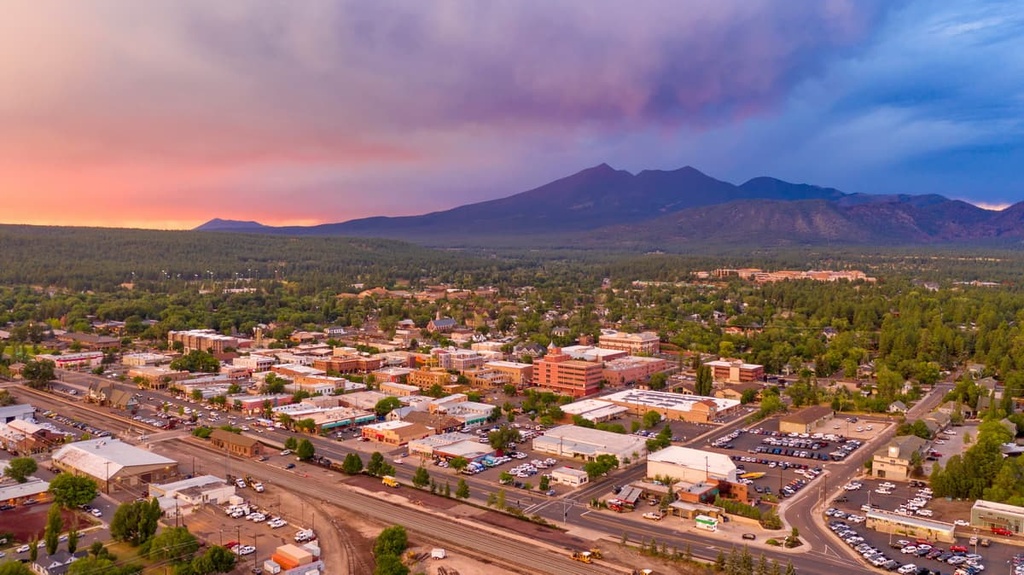 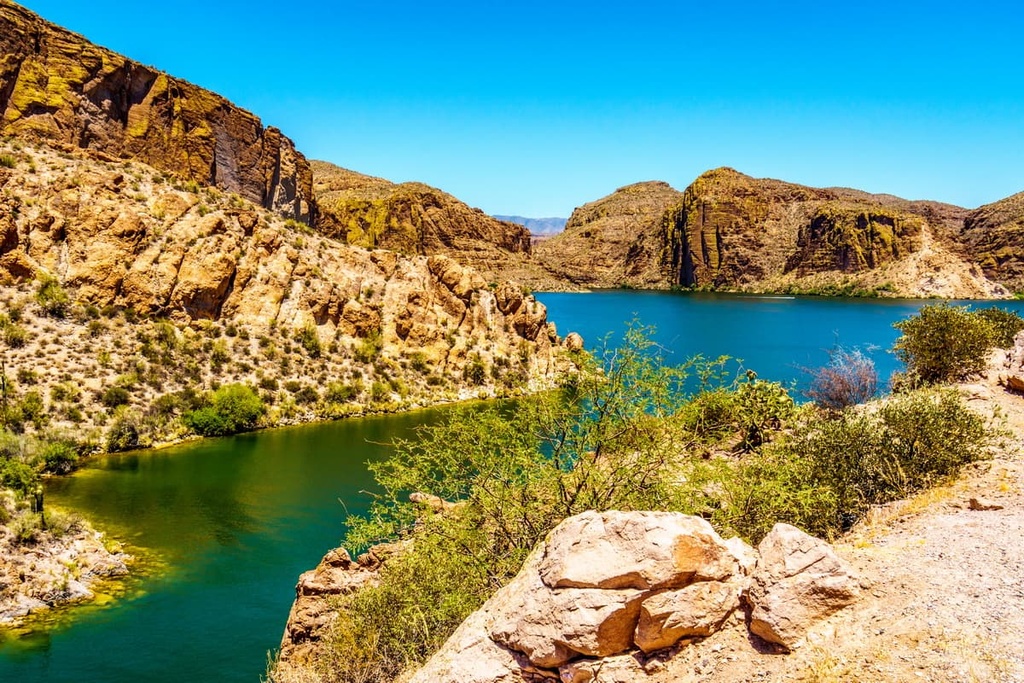 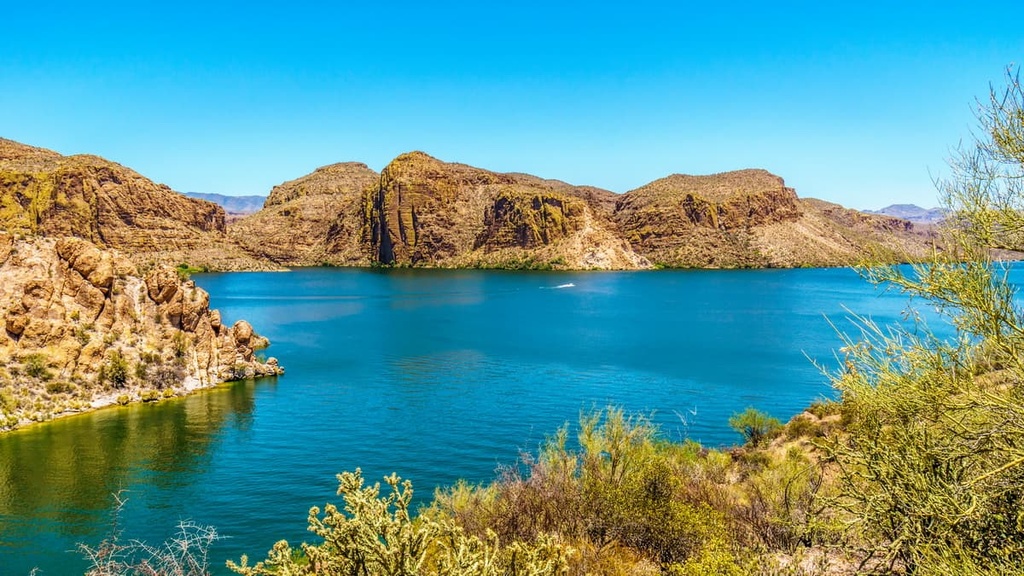 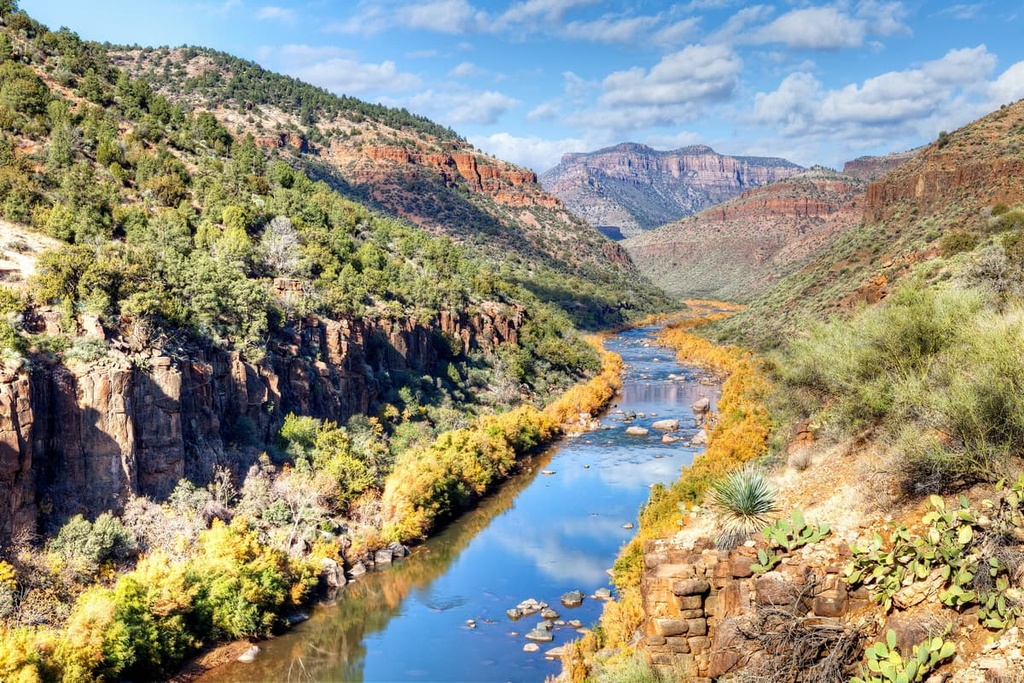 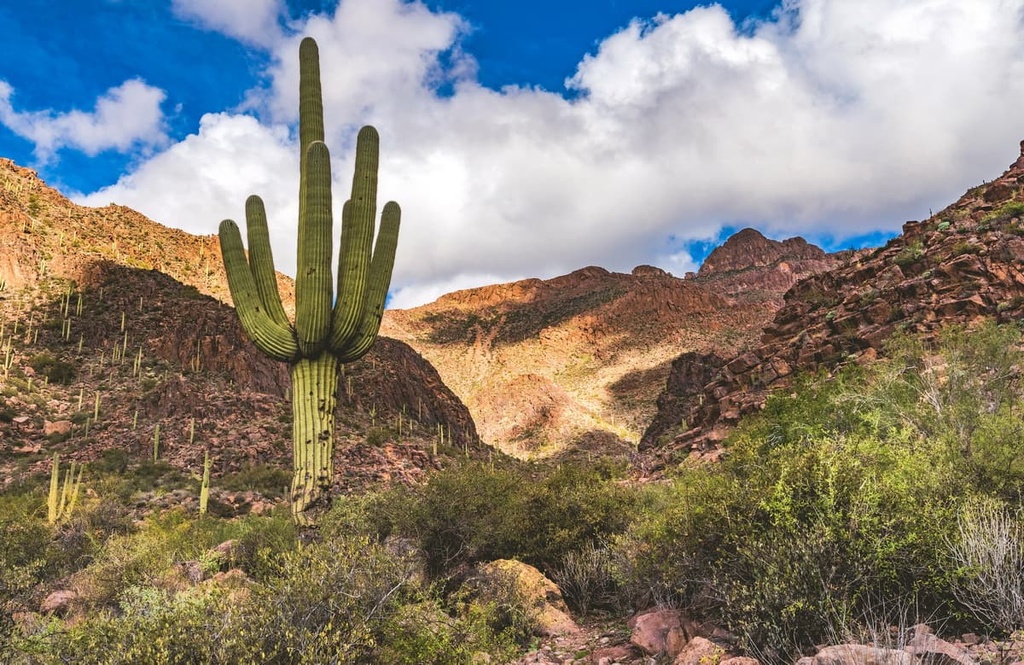 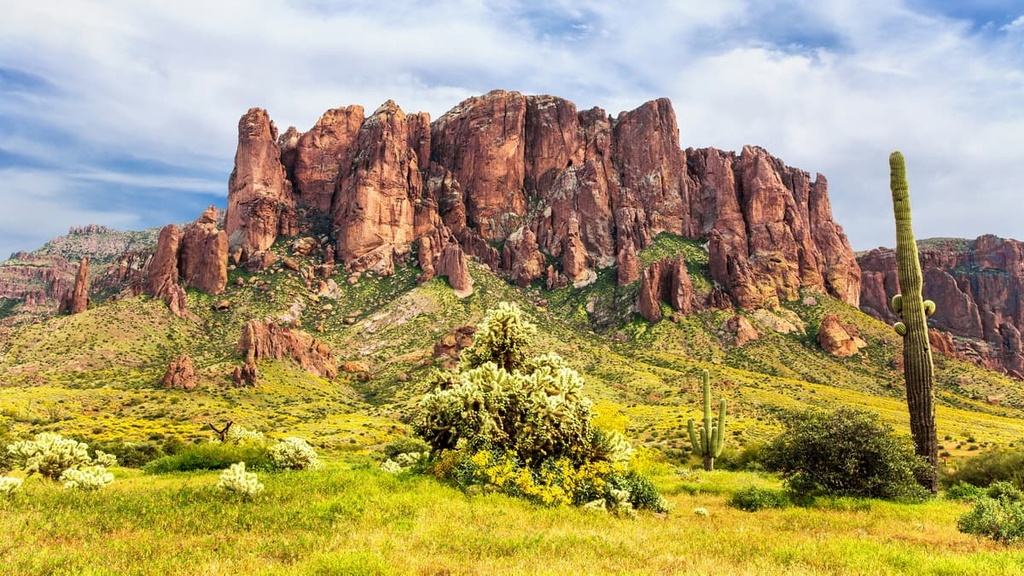