One of the crown jewels of the US National Park System, Grand Canyon National Park in the northwestern part of the US state of Arizona is one of the most stunning displays of geologic forces in the world. 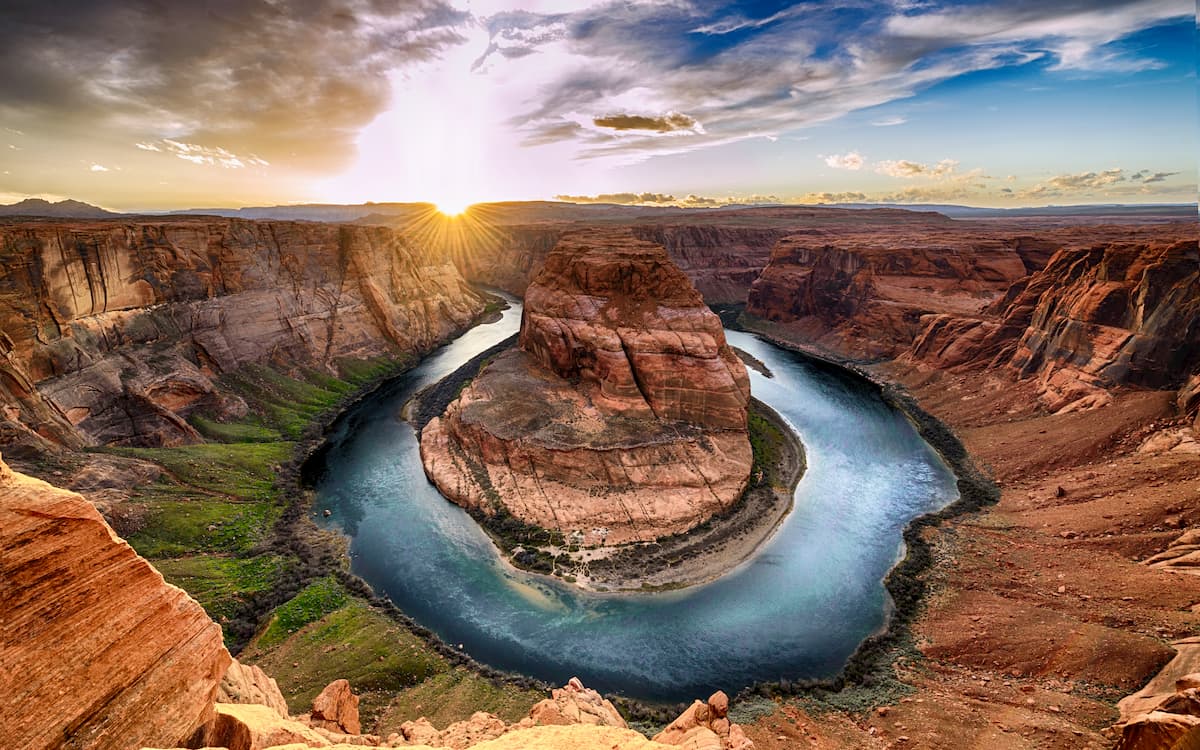 Aptly named, the park is situated around a massive canyon that surrounds the mighty Colorado River. It contains 278 named mountains, the highest and most prominent of which is Lindbergh Hill (8,934ft/2,723m).

Grand Canyon National Park is nestled in the northwestern part of Arizona, near the state's borders with Nevada and Utah. It is located within both Coconino and Mohave counties, just east of Las Vegas and north of Flagstaff.

The park is situated in a rugged and remote part of northwestern Arizona and the desert southwest of the United States. Much of the land surrounding the park is publicly owned, either at the state or federal level.

Although the park is known more for its steep canyons, it is home to a substantial number of high points. These include the peaks of the Kaibab Plateau and the Uinkaret Plateau, two subranges of the greater Colorado Plateau, which covers much of Arizona, New Mexico, Colorado, and Utah.

Indeed, Grand Canyon National Park is perhaps best known for its rocky landscape, which is the result of millions of years of rich geologic history.

The geologic history of the Grand Canyon started approximately 2 billion years ago, when the metamorphic and igneous rocks found in the innermost part of the gorge started to form.

Eventually, the region experienced widespread uplift, which caused these rocks, which were once under water, to rise up to dramatic heights. Although geologists aren't entirely sure why this uplift, which affected the entire Colorado Plateau region, occurred, there are 2 primary theories.

The first theory states that changes in the subduction of the Farallon Plate after the completion of the Laramide Orogeny in the Cenozoic Era caused the uplift of the Colorado Plateau.

The other theory, however, argues that the region rose due to the effects of isostatic rebound. Isostatic rebound is the upward movement of land masses after the removal of a huge mass, such as a glacier, or after the widespread erosion of rock layers.

Regardless of what caused this uplift, however, one thing is certain: this uplift helped instigate the flow of the Colorado River, which then eroded away at the landscape over millions of years to create the Grand Canyon that we know and love. It's important to keep in mind, though, that the Colorado River continues to erode away at the Grand Canyon, which is an inherently dynamic place.

In addition to its exceptional geological features, the Grand Canyon is home to a surprisingly abundant array of unique ecosystems.

While all of the national park has a semi-arid desert climate, there are a number of different habitats that exist in the region due to local differences in temperature and aridity. Indeed, the biological diversity of the park is often greatly understated.

For example, riparian habitats flourish near the Colorado River, which is one of the few year-round sources of water in this dry landscape. Here, plant life includes everything from hanging gardens to coyote willow, arrowweed, mesquite, and saltcedar.

At slightly higher elevations, the canyon is home to a desert scrub community, which is the perfect habitat for various cacti and other succulents. You can generally find creosote bush, catclaw acacia, ocotillo, mesquite, and sagebrush within this desert scrub.

Just above the desert scrub is a woodland of pinyon pine and one seed juniper. Other flora that flourish here include Mormon tea, yucca, dropseed, and sagebrush. These communities connect the desert scrub to the forests that grow above 6,500ft (1,980m), acting as a sort of transitional ecosystem.

Around 6,500ft (1,980m) in elevation, the pinyon pine and juniper woodlands give way to the park's ponderosa pine forests. These forests are also home to elderberry, mountain mahogany, and Gambel oak, providing a respite from the heat and sun that's so typical of this desert landscape.

Finally, at the highest elevations of the Grand Canyon, which extend beyond 8,000 feet (2,440m), the region contains spruce-fir forests of Douglas fir, white fir, Engelmann spruce, mountain ash, blue spruce, and aspen. On the North Rim of the Grand Canyon, which is the loftiest part of the park, you can also find some very small montane meadow and subalpine grasslands.

The region that is now Grand Canyon National Park has a long and storied history of human inhabitation that dates back some 13,000 years. Countless people have lived in and around the canyon, which is considered sacred to many cultures.

Perhaps the first Europeans to visit the Grand Canyon were Spanish soldiers under the command of García López de Cárdenas who travelled through the region in 1540. They came in search of a waterway that would lead them to the Gulf of California, but they were unable to reach the Colorado River.

After this first European visit to the region, the Grand Canyon went unvisited by Europeans for over 230 years. In the 1850s, the US Government funded an expedition to the Grand Canyon, which, although sacred and well-known to the Indigenous peoples of the region for thousands of years, was a blank space on the map of European-Americans.

Unfortunately, for the expedition, which was led by First Lieutenant Joseph Christmas Ives, they were unable to travel into the Grand Canyon by boat, as they crashed their steamboat in the Black Canyon. They did, however, walk as far as Diamond Creek, which is located within the modern day boundaries of the Hualapai Indian Reservation.

Perhaps the most famous US-sponsored trip to the Grand Canyon was led by John Wesley Powell, who rafted down the Green River to the Colorado River from Green River, Wyoming in the late 1860s. They managed to raft the course of the river through the Grand Canyon over the course of several months. Powell then returned for a second expedition some 10 years later, repeating his down river journey.

The late 1800s brought a period of mining, ranching, and settlement of the Grand Canyon region by various European-Americans.

In 1882, President Chester Arthur's executive order declared that all of the land on the Colorado Plateau adjacent to the canyon was the public property of the US Government, which led to the forced removal of the Havasupai people and other nearby peoples from their ancestral lands. This order came on the heels of the Long Walk of the Navajo in 1864, which forced thousands of Navajo people to walk from their homelands in northern Arizona to New Mexico.

By 1903, President Theodore Roosevelt had visited the canyon for the first time and, just a few years later, he established it as a game preserve to limit the amount of livestock grazing allowed in the region. Unfortunately, by then, much of the region's major predators, including wolves, had been extirpated.

In 1908 and 1909, the preserve was re-designated as a national park and much of the adjacent land was included as part of the Kaibab National Forest. However, it took 10 more years for the Grand canyon to be declared a national park, a status it achieved in 1919.

Since being designated as a national park, the Grand Canyon has faced a number of issues, including the construction of the Glen Canyon Dam in 1963, multiple mining claims disagreements, and a sizable surge in popularity among visitors.

To this day, Grand Canyon National Park remains one of the most popular national parks in the United States and in the world at large, serving as a major tourist attraction for visitors from countries around the globe.

Grand Canyon National Park is split up into 2 main sections: the South Rim and the North Rim, each of which offers their own unique outdoor recreation opportunities.

South Rim of the Grand Canyon

Here, there is a train station, multiple lodging and dining options, 2 visitoSouth Rim of the Grand Canyoncenters, and some of the park's most popular trails. Some must-do hiking trails from the South Rim include:

Keep in mind, however, that all of the park's trails that enter the canyon are steep and strenuous. Temperatures can be extreme during the summer months and water isn't always available.

Many hikers need to be rescued from the canyon each year due to a lack of preparation, so be sure to start your hike early in the morning, and bring plenty of food and water for the adventure.

North Rim of the Grand Canyon

While the South Rim of the Grand Canyon sees quite a lot of hustle and bustle, the North Rim is decidedly quieter. In fact, only 10% of all of the park's visitors ever go to the North Rim, which is also located at over 8,000 feet (2,438m) in elevation.

Here, there is 1 lodge and 1 campground, and 1 visitor's center, however, the North Rim is only open in the summer months. Getting to the North Rim either requires a car or the seasonal Trans Canyon Shuttle.

Popular day hikes from the North Rim include:

For the more intrepid hiker, a rim to rim backpacking trip is a particularly fantastic adventure. The North Rim is 21 miles (34km) from the South Rim by foot, though this involves a substantial amount of elevation gain. Most hikers complete their Rim to Rim hike as a backpacking trip, which requires a permit that you should reserve well in advance, unless you plan to stay at Phantom Ranch.

Grand Canyon National Park is located near some fairly sizable cities, all of which make for a great starting point for your adventures. Here are some of the best places to check out during your trip.

Las Vegas is just 4.5 hours to the southwest of Grand Canyon National Park. Although it's a bit of a distance between Vegas and the park, the city's excellent transportation links make it a perfect place to start a trip to the southwestern US.

In particular, Vegas is located along I-15, which connects it to southern California and some of the other parks in that region, including Death Valley National Park and Joshua Tree National Park. Las Vegas also has a major international airport, with excellent connections to major cities around the world.

Flagstaff is situated about 1.5 hours to the south of the South Rim of Grand Canyon National Park. It is home to about 75,000 residents and it is very close to the highest peak in Arizona, Humphreys Peak.

The city is considered to be a gateway to the park, which has led to its surge in tourism in recent years. Flagstaff is an International Dark Sky City, which makes it a great place to go stargazing at night. In fact, the former planet Pluto was even discovered from the Lowell Observatory in Flagstaff.

Flagstaff is located along a number of major interstate highways and it is easy to get to by road. The city has a small regional airport, which primarily offers connections to Phoenix, Dallas, and Denver.

St. George is home to about 90,000 residents, which makes it a cultural and commercial hub for the region. It also happens to be the largest city in Utah outside the Wasatch Front. The city is easy to get to by road and it has a regional airport that offers good connections to major cities in the western US. Additionally, there are a number of intercity bus lines that connect St. George to the surrounding area. 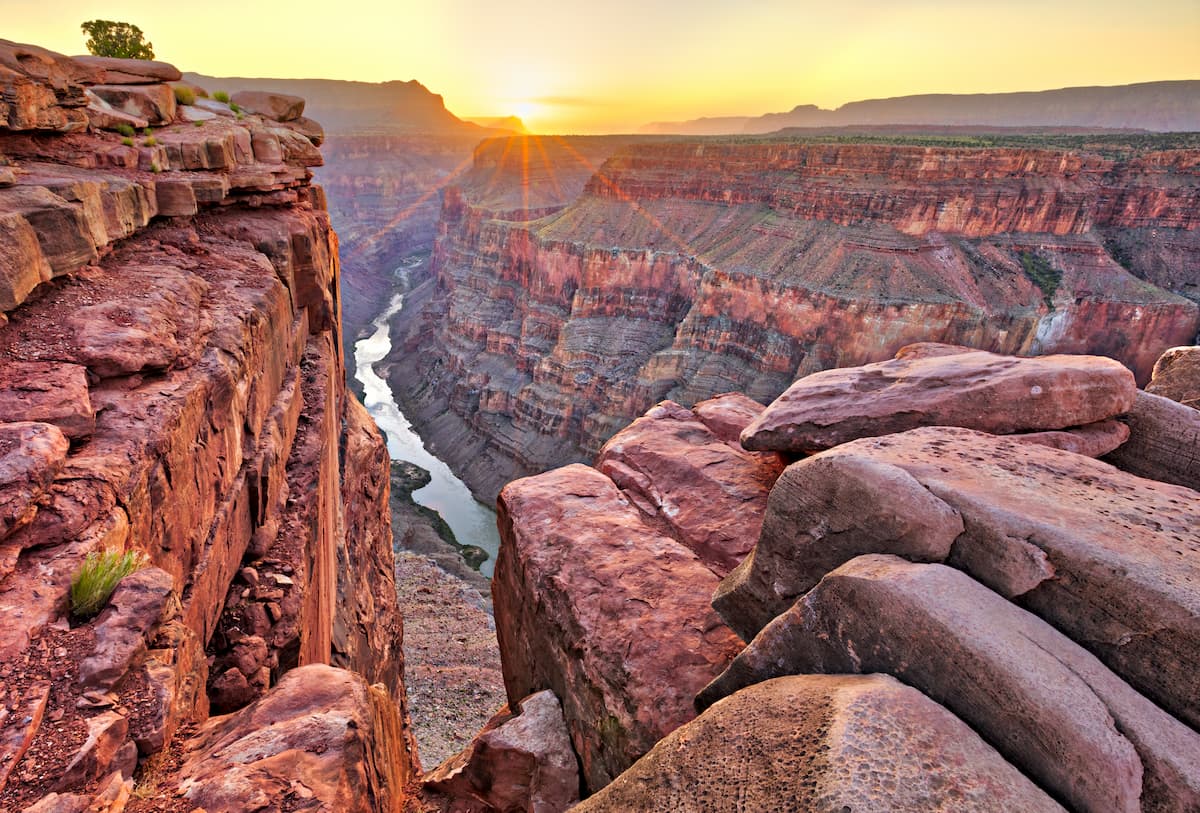 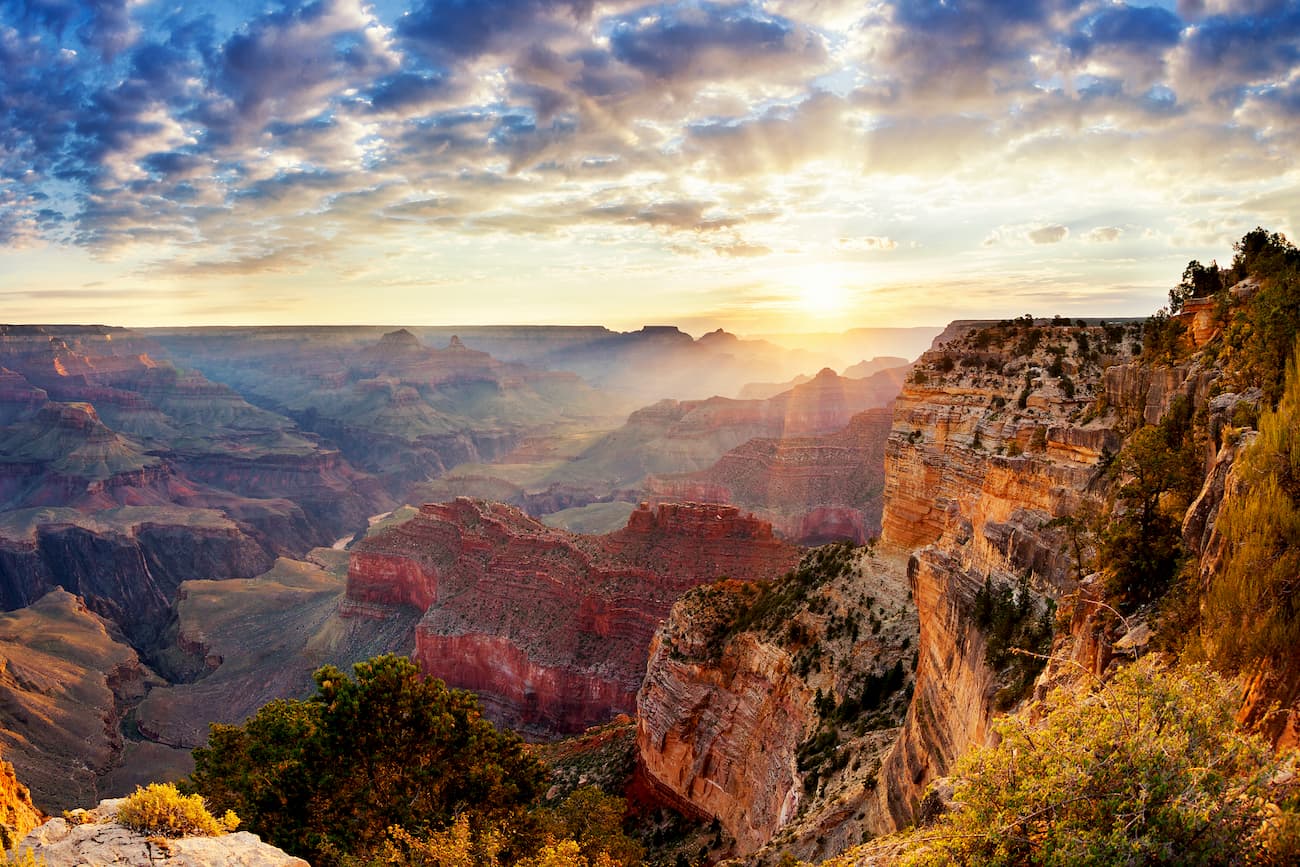 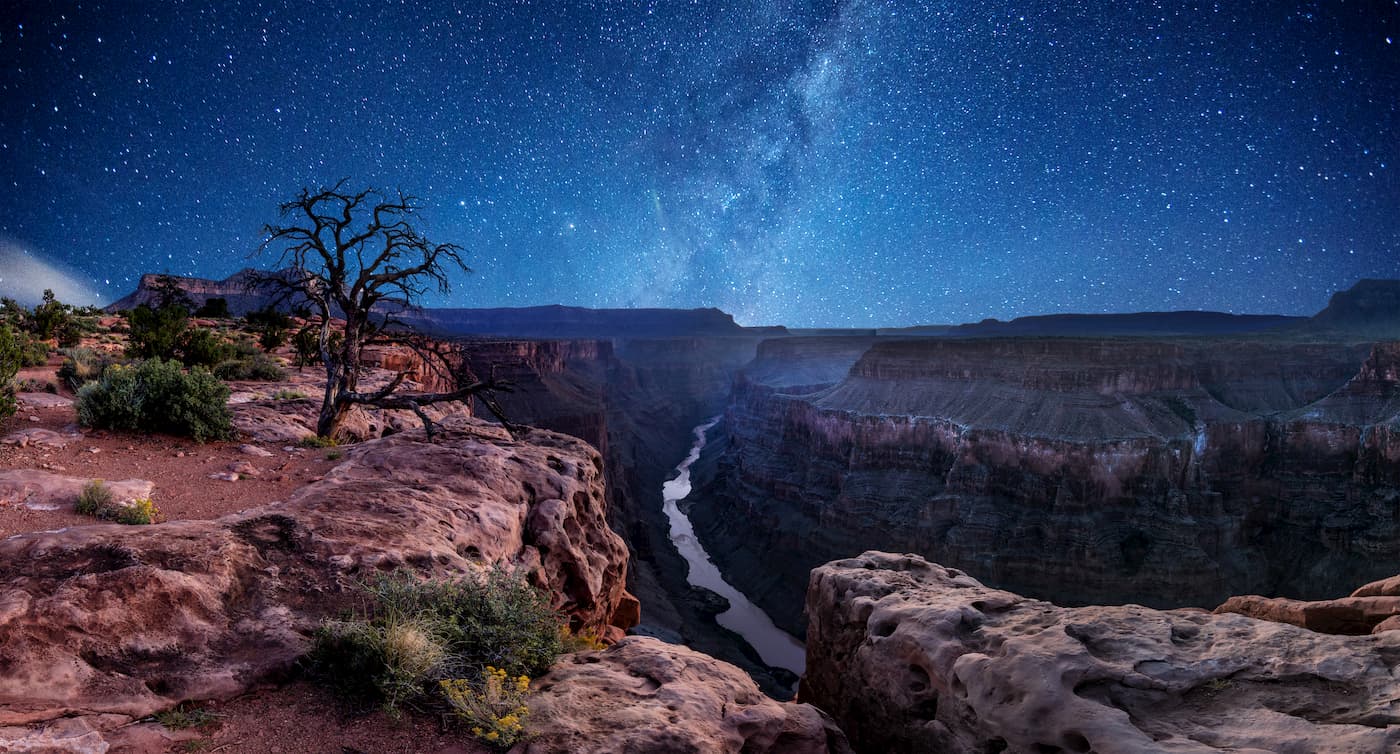 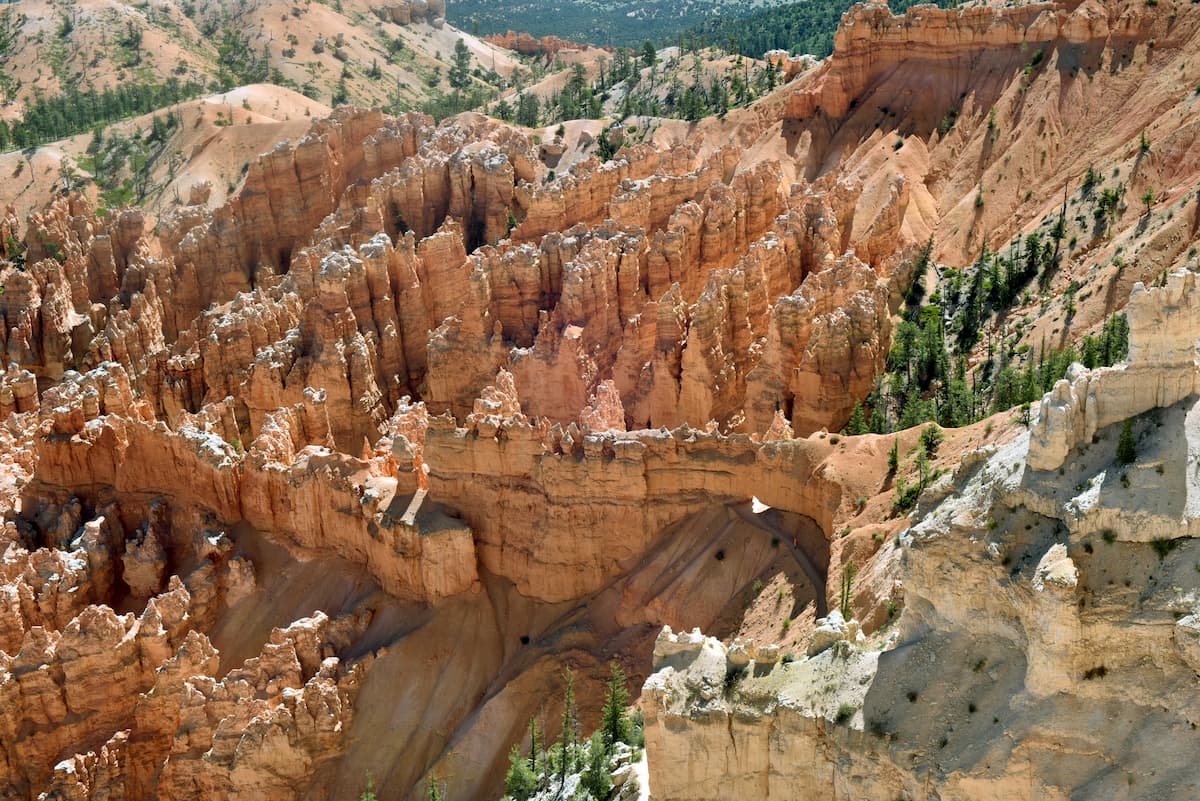 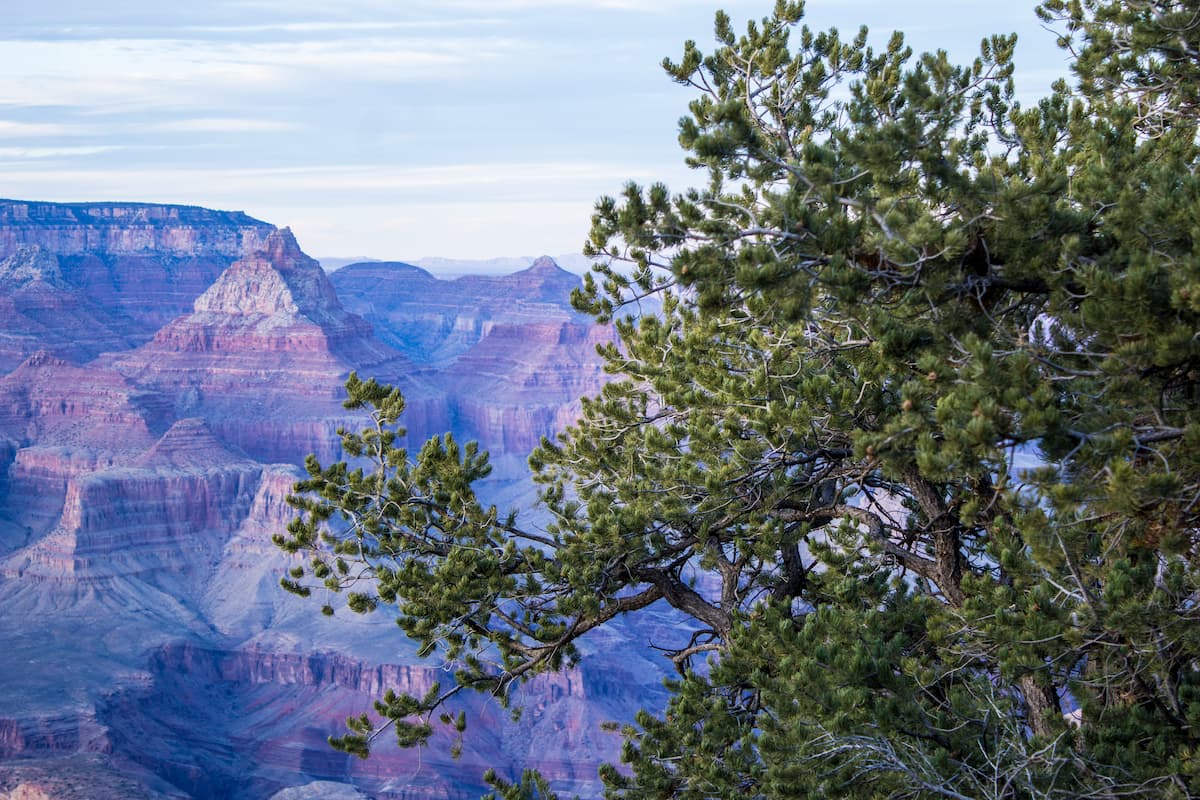 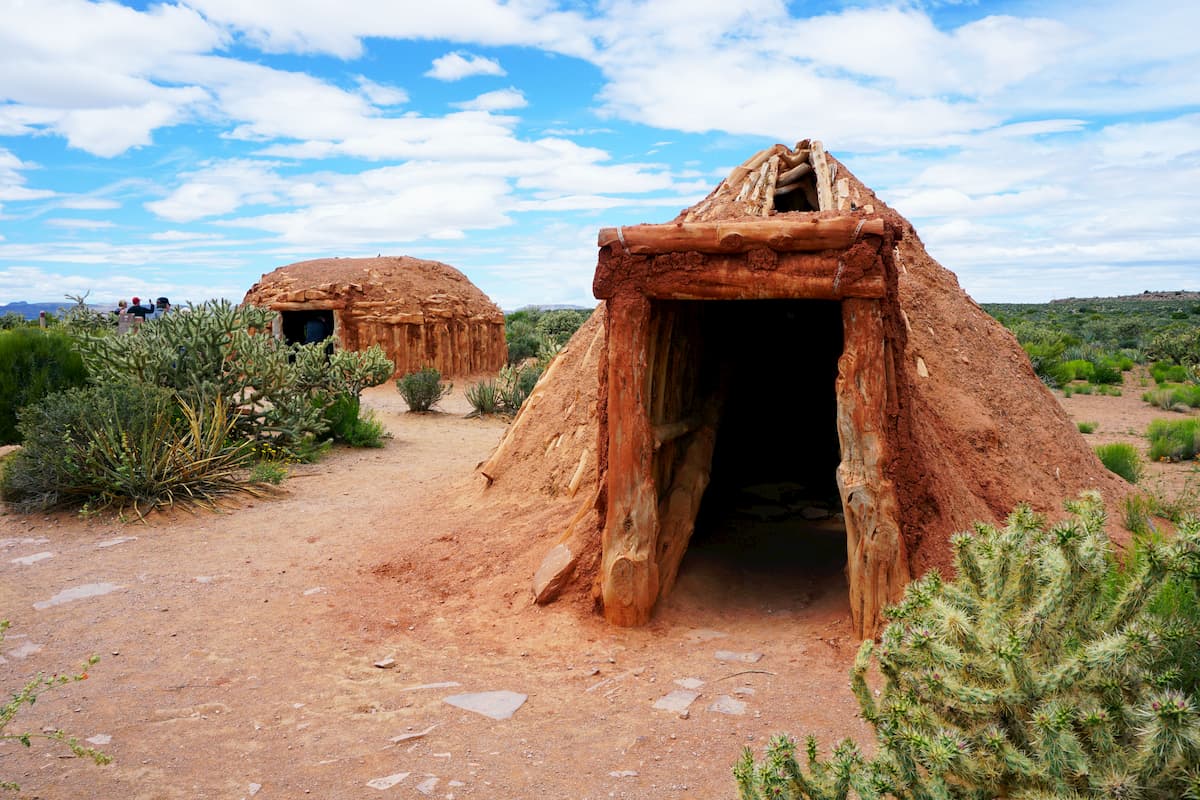 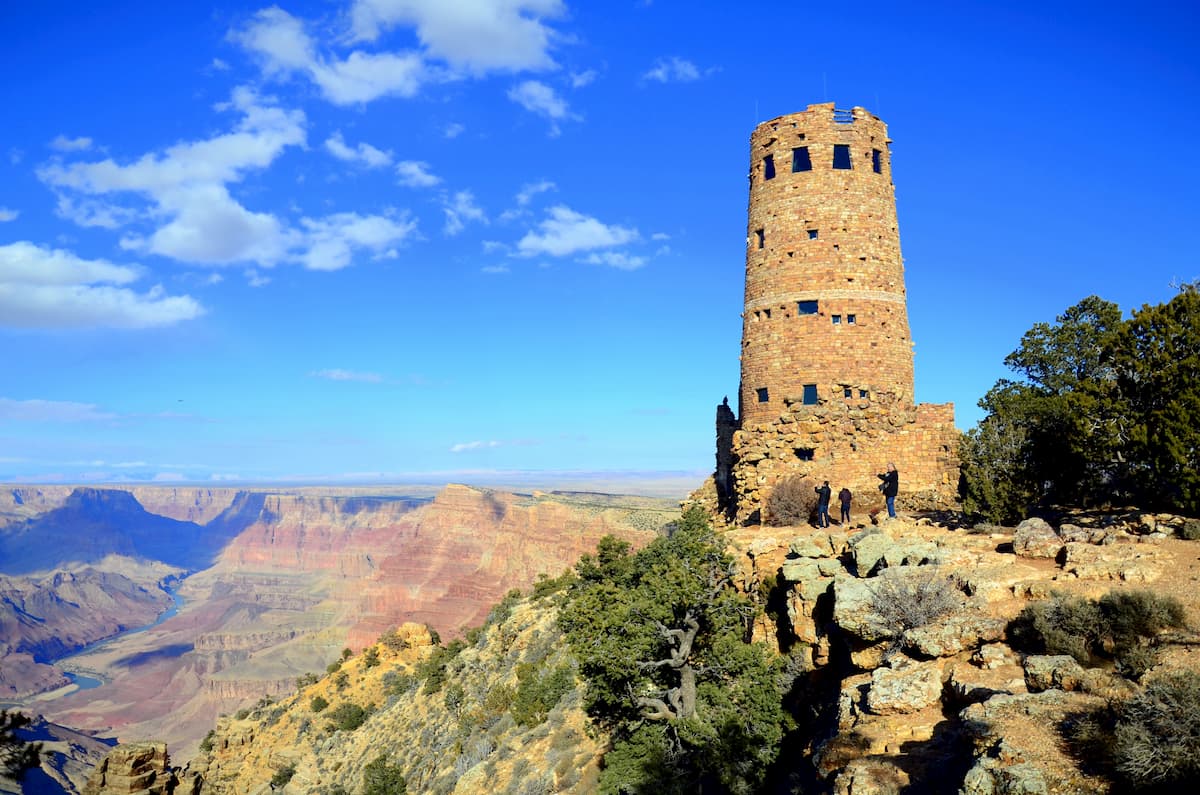