Situated in the southwestern corner of Utah, Bryce Canyon National Park is a must-visit destination for the geologically-minded among us. Here, visitors can see the world’s largest concentration of hoodoos (irregular columns of rock) and gaze at the splendor of the park’s desert beauty.

Despite its name, Bryce Canyon is not, as one might think, a canyon, but rather a collection of giant natural amphitheaters that showcase the park’s many geologic features. Just an hour and a half drive north of Zion National Park, Bryce Canyon is much higher in elevation than its southern neighbor. With an average rim height between 8,000 and 9,000 feet (2,400 to 2,700m), Bryce Canyon is home to 15 named mountains, the highest and most prominent of which is Rainbow Point (9,114ft/2,778m).

Geologically, Bryce Canyon is part of the larger Colorado Plateau geographic province. Interestingly enough, since Bryce didn’t form from erosion off of a central stream, it is not technically a canyon. This means that, unlike Zion and the Grand Canyon, Bryce formed through headward erosion, which is when bedrock erodes in a backward-moving direction from a stream’s origin.

As Bryce Canyon eroded, beautiful and colorful hoodoos were exposed, with some up to 200 feet (60m) high. Visitors to the park can experience the stunning beauty of this unique landscape, with plenty to see, including the jagged buttes and mesas at the canyon rim, such as Noon Canyon Butte (8,468ft/2,581m), Boat Mesa (8,074ft/2461m), and The Cathedral (7,867ft/2,398m).

These days, the main attraction to Bryce Canyon is its natural splendor, though the region has been home to human inhabitants for at least the last 10,000 years. Although relatively little is known about the early human history within the current park boundaries, artifacts from the Anasazi and Fremont people have been found in and around Bryce Canyon.

Around the 12th century, the Paiute moved into the area around Bryce, where the lived for centuries until the arrival of Mormon scouts in the 1850s. Not long after the arrival of the scouts, small groups of Mormons started to settle the area east of Bryce along the Paria River, while US Army Major John Wesley Powell set off on his expedition to survey the Colorado Plateau.

The English-language name for the park comes from the Scottish Mormon, Ebenezer Bryce, who came to settle in what is now the Bryce Amphitheater, right below the largest collection of hoodoos in the current national park. Although Bryce grazed cattle and built a road from the canyon to the plateau, he eventually abandoned the site and moved to Arizona in 1880 due to the inhospitality of the area.

Bryce Canyon first gained attention as a place of national interest in the early 1900s, when it caught the attention of National Park Service Director Stephen Mather, who suggested that the area be made into a state park. However, state lawmakers at the time lobbied for federal protection, and President Warren Harding declared the area a national monument in 1923. Just five years later, however, the area was redesignated as Bryce Canyon National Park, after the last of private and state-held land was sold to the federal government.

Nowadays, most visitors to the park enjoy the fantastic sightseeing along Bryce Canyon’s scenic drive or head out on a hike on one of Bryce’s eight marked and maintained day hiking trails. Thanks to the park’s high elevation, it’s a popular backcountry skiing destination, with over 10 miles (16km) of marked trails within Bryce’s boundaries.

Additionally, visitors to the park can enjoy the region’s crisp, clear air and perhaps will even get a chance to view Navajo Mountain from the top of the canyon. Plus, Bryce Canyon National Park has a night sky rating of 7.4, making it one of the best places to go stargazing in the United States, with over 7,500 stars visible to the naked eye.

Bryce Canyon National Park is home to eight marked and maintained day hiking trails, each of which provides an excellent adventure into the high desert. Here are a few fan-favorites:

This 11 mile (17.7km) long one-way trail takes hikers on a long walk along the rim of Bryce Canyon. Gaining just over 1100 feet (350m) of elevation across the entire rim, this trail allows hikers to see the beautiful hoodoos of Bryce from above. Not looking to hike the whole trail? The Rim Trail is a perfect choose-your-own-adventure path, that even has a paved section between Sunrise and Sunset Points.

This 1.3 mile (2.2km) loop takes hikers to see some beautiful rock formations, including Thor’s Hammer, Two Bridges, and the bottom of Wall Street. Short, but steep, Navajo Loop can be combined with Queen’s Garden to create a 2.9 mile (4.6km) loop, that’s recommended in the clockwise direction for good access into the canyon itself. The Navajo/Queen’s Loop is perhaps the most popular trail in the entire park, so get an early start if you’re looking for some solitude!

This challenging 4.7 mile (7.5km) one-way hike takes you across the Bryce Amphitheater from Bryce Point to Sunrise Point for hikers looking to see as much of the area as they can during their trip. For those of us looking for a bit of an extra challenge, the trip can be extended by 3.2 miles (5.15km) by returning via the Rim trail to Bryce Point. Alternatively, the park’s shuttle will bring you back to your original starting point.

This 8.0 mile (12.9km) long loop trail takes hikers to see some of the highlights of Bryce Canyon, including Chinese Wall, Tower Bridge (7,474ft/2,278m) and other tall hoodoos. The best part about this stunning trail? It’s generally not very crowded, so it’s a great option for people looking to get off the beaten path.

The Under-the-Rim Trail is a 22.9 mile (36.9km) long path that connects Bryce Point to Rainbow Point, with a number of connector trails leading back to the Scenic Drive. The Under-the-Rim Trail is home to some of the only designated campsites in Bryce Canyon National Park (four others are found on the Riggs Spring Loop Trail), which means hikers can have the experience of camping within Bryce’s unique forests and meadows.

Anyone looking to head out on a backcountry camping trip in Bryce needs to obtain a backcountry permit ($5/person over the age of 16) and make a reservation up to 48 hours in advance, in person at the Visitor Center. Camping in Bryce Canyon is an experience that’s certainly not to be missed!

Visitors to Bryce Canyon National Park have a few options when it comes to finding a place to stay. Here are some of your best lodging choices for your next trip to Bryce Canyon:

There are two official campgrounds within Bryce Canyon National Park: North Campground and Sunset Campground. The North Campground is open year-round and has 99 sites that are all available on a first-come-first-serve basis. Although there are no group sites available, there are options for both RV and tent campers.

Sunset Campground is open only from mid-April to mid-October and its 100 sites are reservable on Recreation.gov. Camping at one of these campgrounds makes traveling within the park quite convenient, as campers can leave their cars at their campsite and use the park’s shuttle to get to the trailhead (between mid-April and mid-October), avoiding traffic congestion and parking issues.

Alternatively, anyone looking for a more comfortable sleeping arrangement can stay at the Lodge at Bryce Canyon. The Lodge’s comfortable hotel rooms are perfect for anyone who wants to experience the beauty of Bryce without having to “rough it.” Reservations are highly recommended, even during the winter season.

Just an hour and a half south of Bryce Canyon is Zion National Park. Significantly larger and more popular (2.6 million visitors a year visit Bryce while 4.3 million go to Zion), Zion is a great place to basecamp if you’re only looking to do a quick day trip up to Bryce Canyon.

Visitors staying at either Watchman Campground or South Campground in Zion Canyon are just an hour and forty-five minute drive from Bryce, making it the perfect location to camp for a day trip to a second national park.

This mountain biking and climbing oasis in the southernmost part of Utah is just a 2 hour and 15-minute drive from Bryce Canyon. In St. George, you can find an assortment of hotels and outdoor gear stores to get you ready for your adventure.

Just four hours south of Bryce Canyon, the city of Las Vegas, Nevada is arguably the best place to fly into if you’re looking to take a trip to the National Park, since there’s generally little traffic along the route once you leave the city. Vegas is home to an international airport, and an abundance of hotels, stores, and the like for any gear you may have forgotten at home. 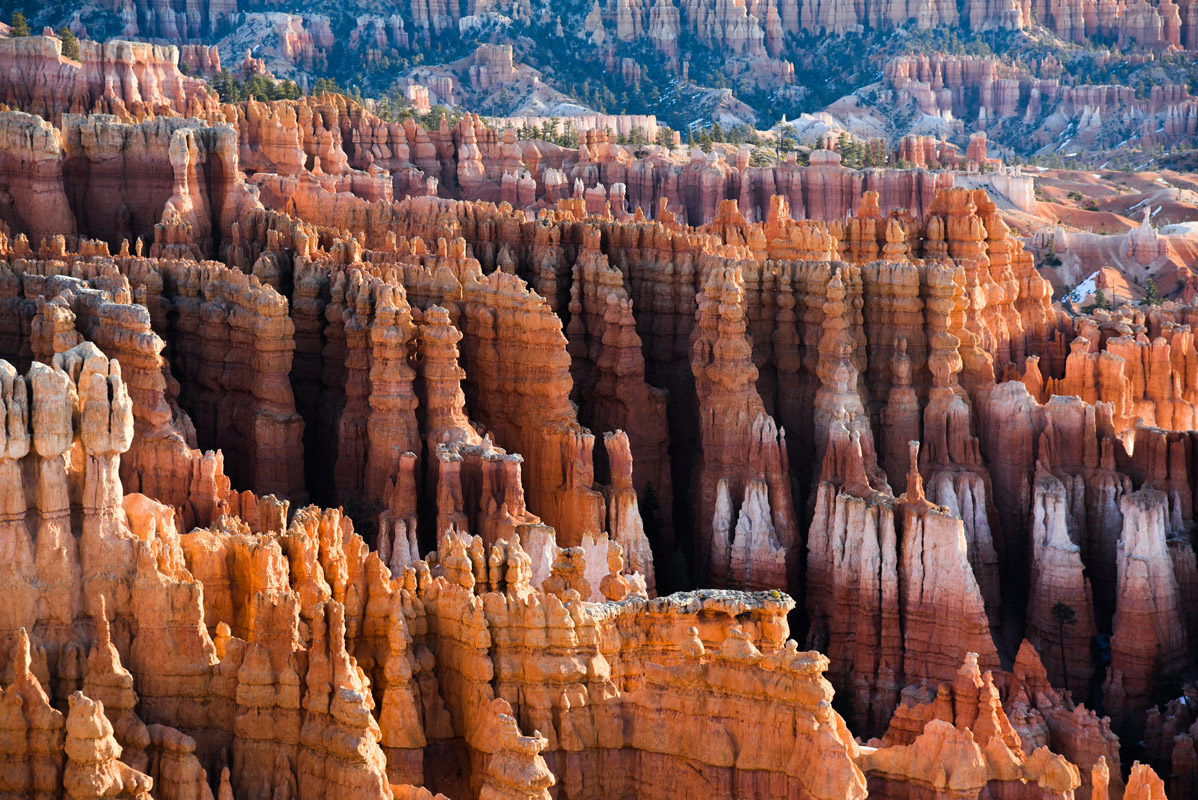 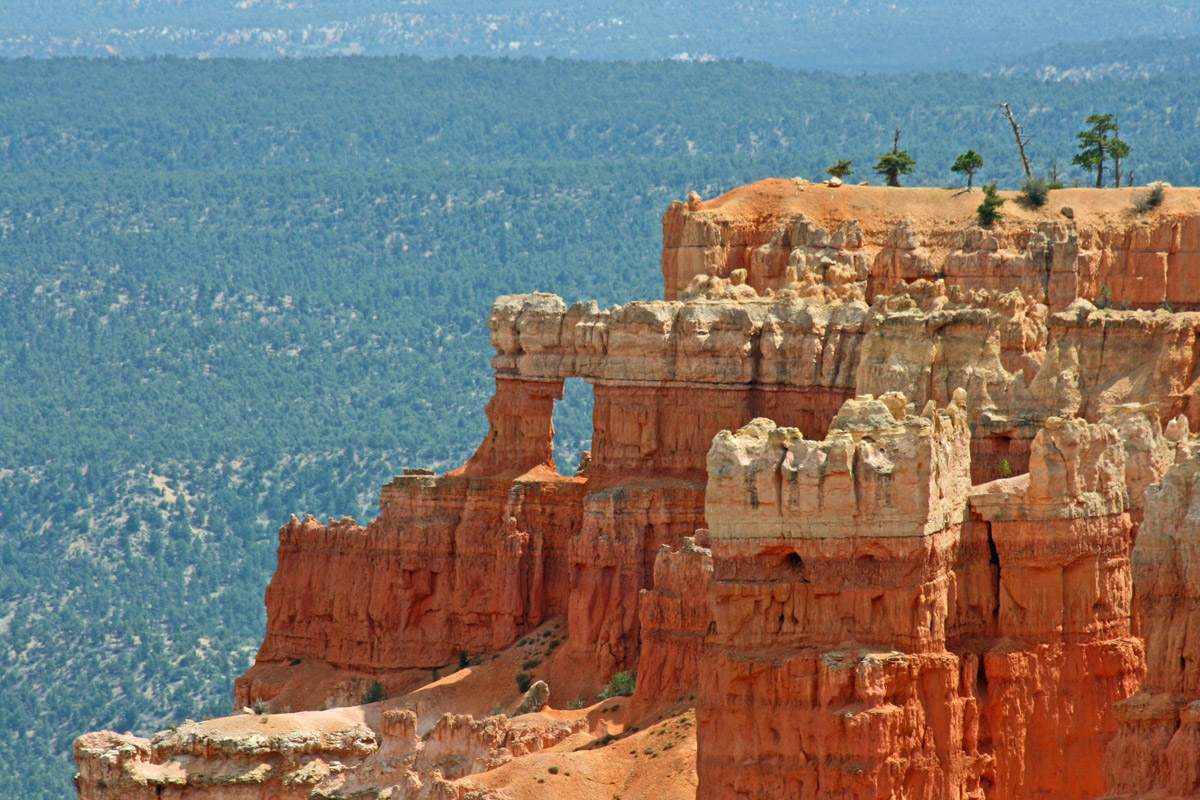 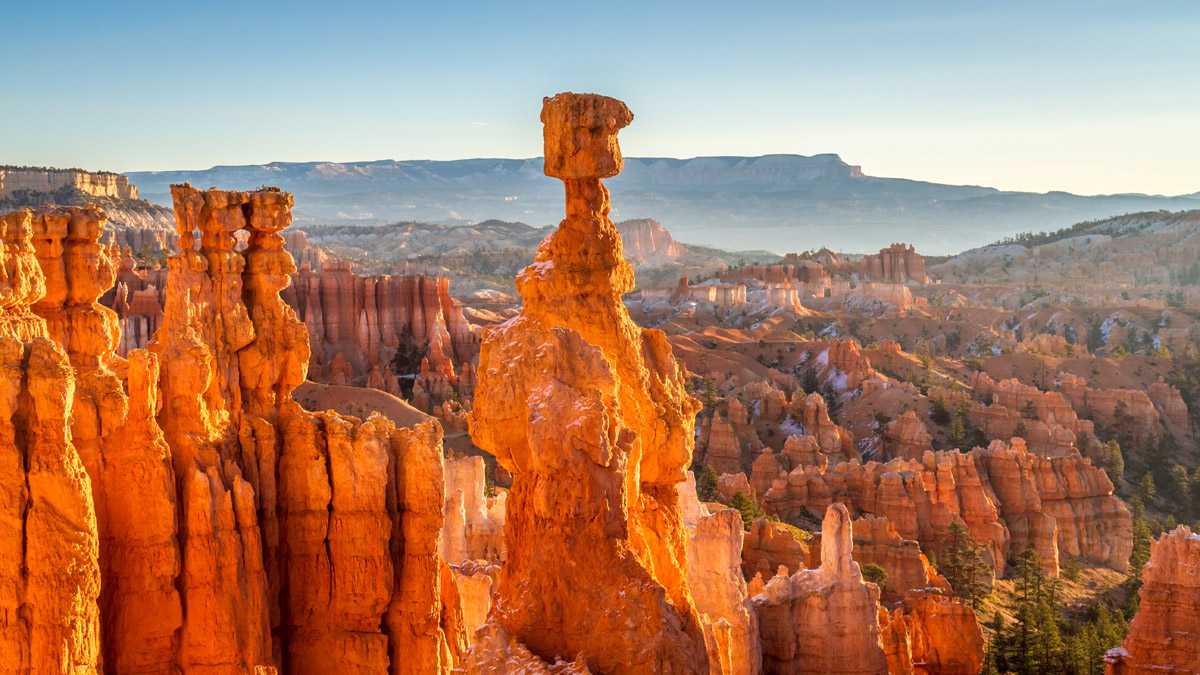 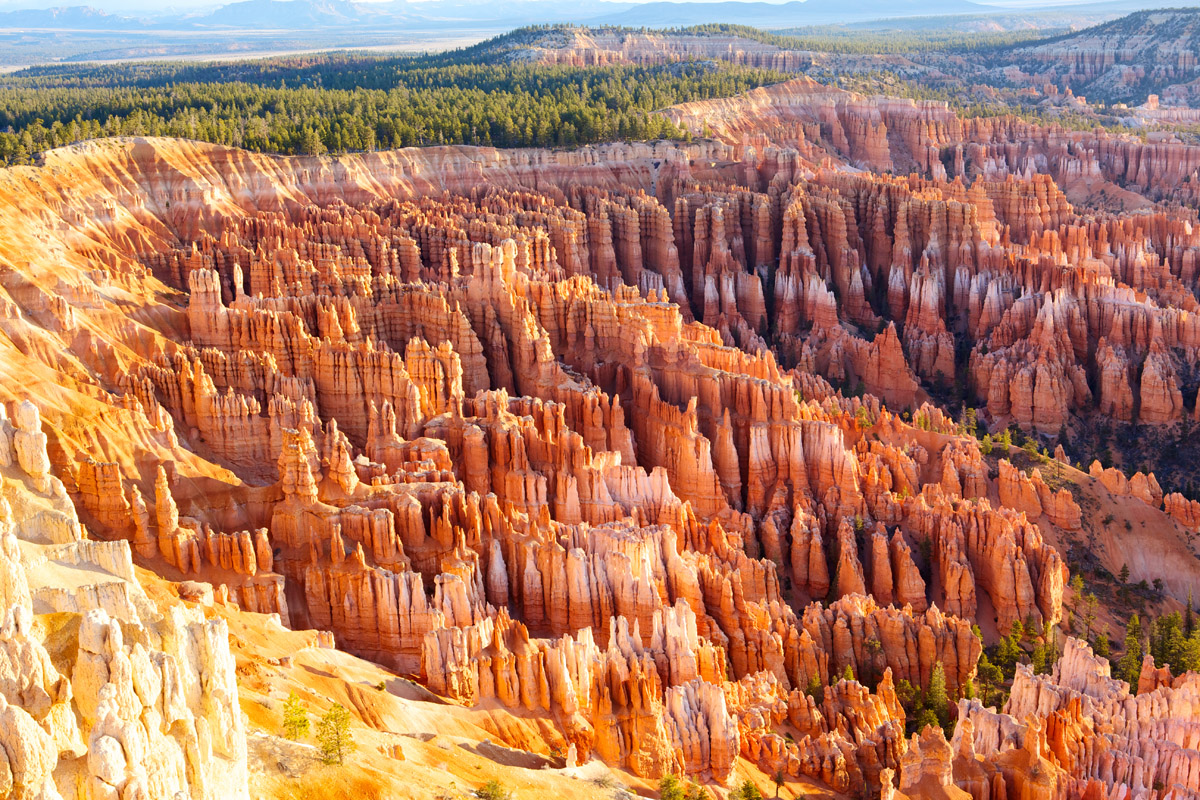 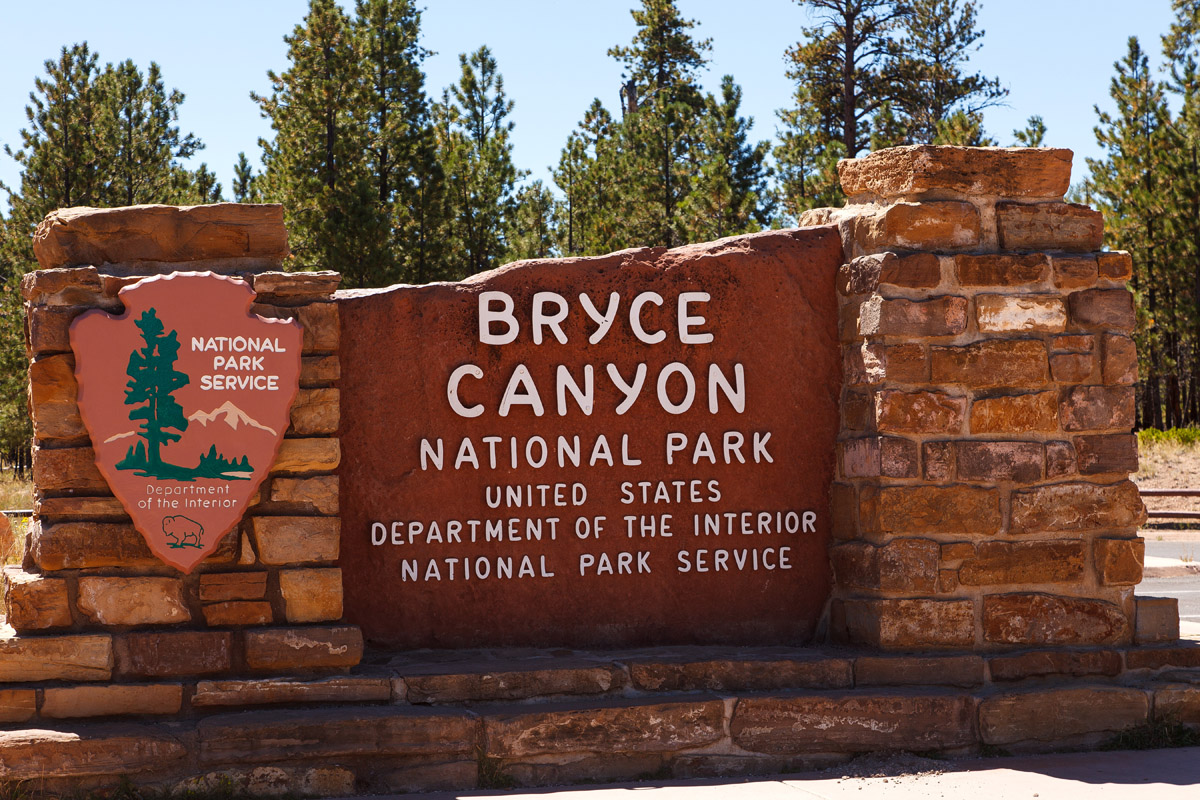 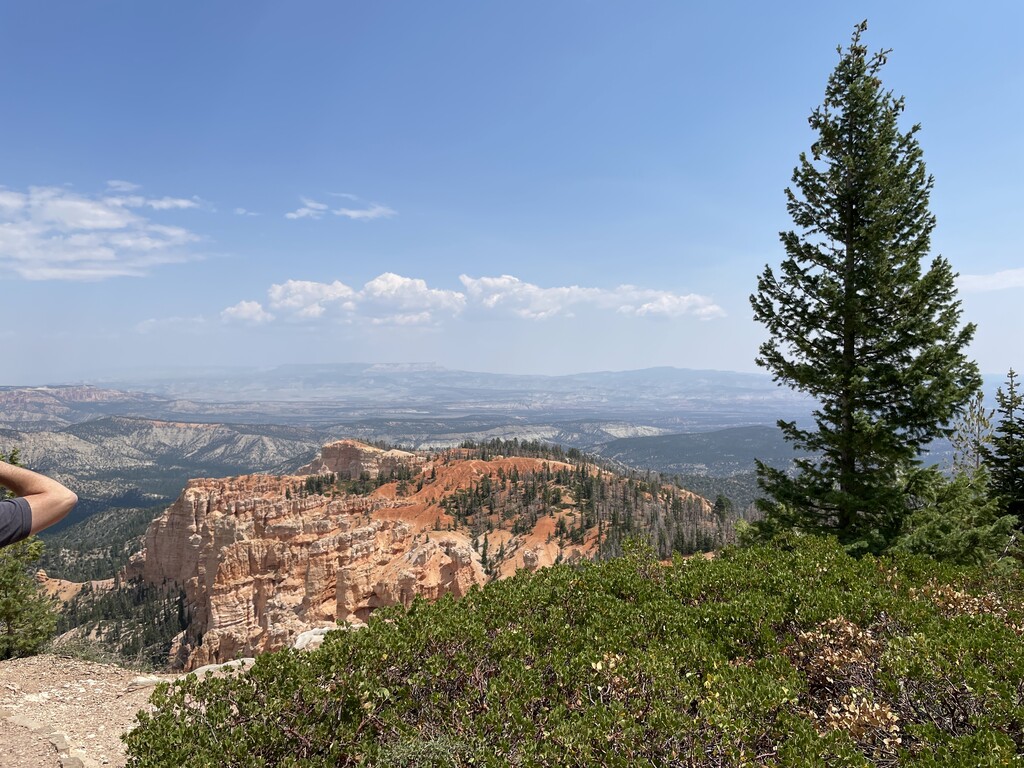