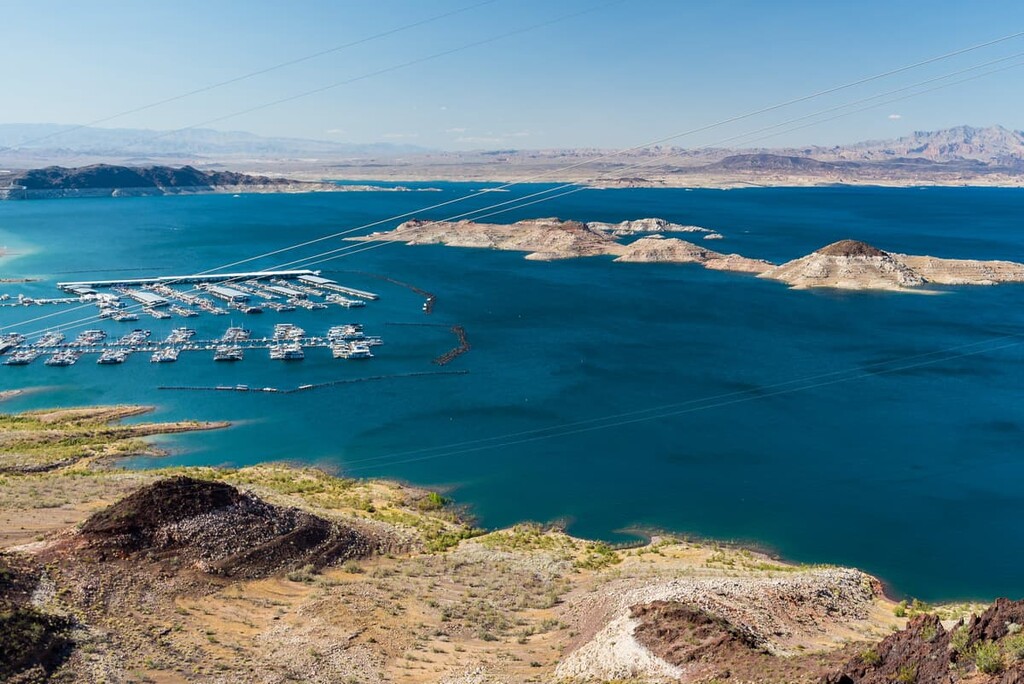 The park’s central feature, Lake Mead, lies along the eastern edge of the Basin and Range province. At full pool, Lake Mead extends 65 miles (105 km) from Black Canyon to Pearce Ferry, which forms the boundary between Lake Mead and the Grand Canyon. Lake Mead’s greatest width is over 9 miles (14 km), and its irregular shoreline spans roughly 550 miles (885 km) in length. 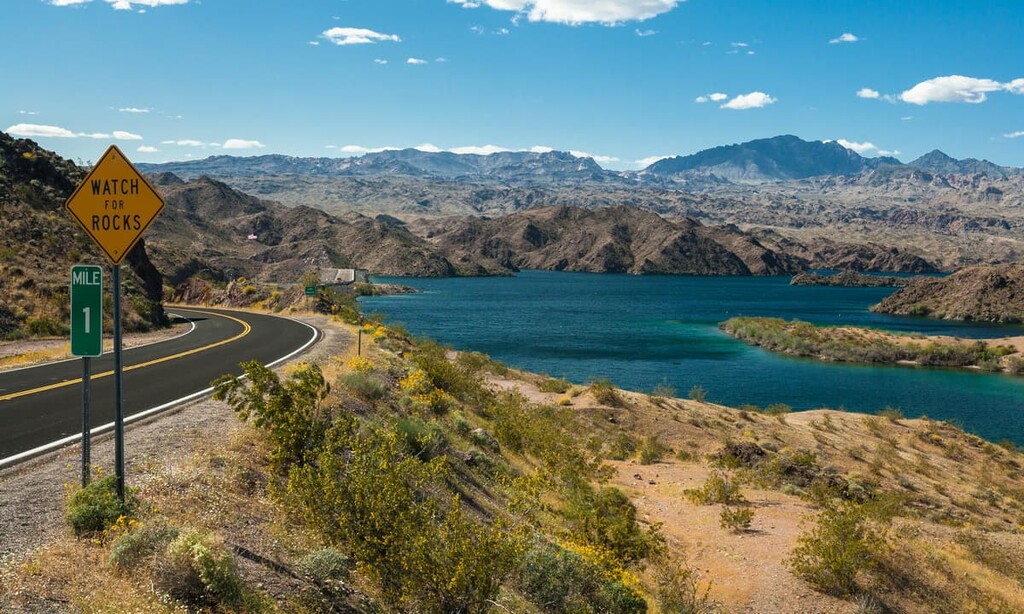 To the south of Lake Mead, a smaller reservoir, Lake Mohave, extends roughly 67 miles (108 km) over the Cottonwood Valley from the Hoover Dam to Davis Dam, straddling the southern Nevada and northwestern Arizona border.

Formed by the Davis Dam, Lake Mohave lies between the Black Mountains in Arizona and the Eldorado and Newberry Mountains in southern Nevada. Nevada’s southernmost named mountain range, the Newberry Mountains, contains the most prominent peak in the Lake Mead National Recreation Area, Spirit Mountain.

There are nine designated wilderness areas in the Lake Mead National Recreation Area. These include: 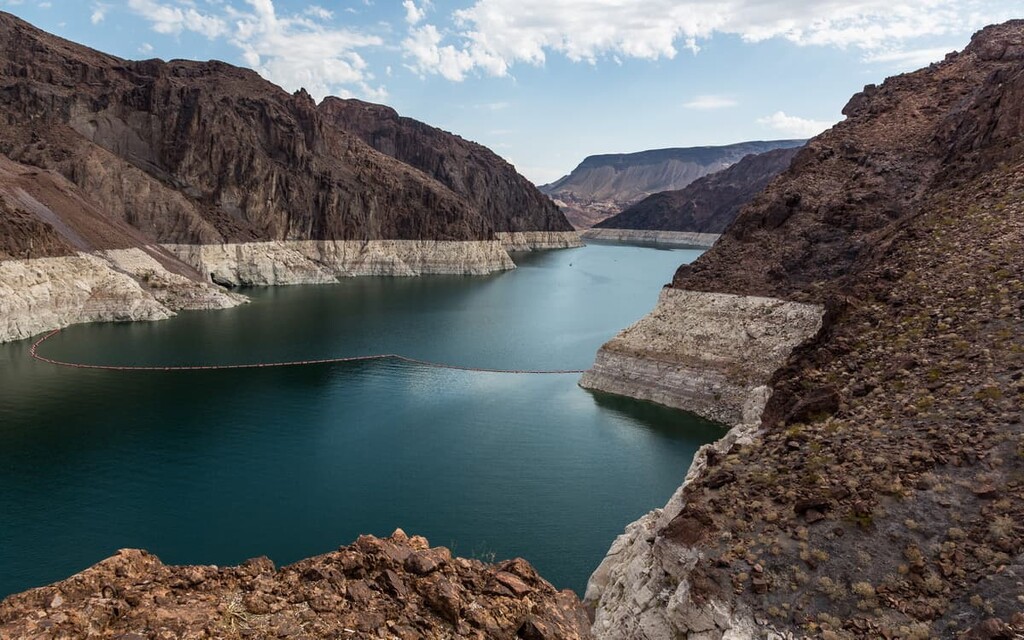 The Lake Mead National Recreation Area contains an impressive collection of geological features, some of which span more than 1.4 billion years of the Earth’s history. Remnants of the region’s unique geological past, which include granite plutons, lava flows, fault lines, boulder fields, petrified wood, and fossils, are well-exposed due to the erosion caused by the Colorado River and its tributaries.

The Grand Wash Cliffs near Pierce Ferry, for example, showcase layers of limestone and shale deposits from ancient Paleozoic seas. Over 500 million years ago, southern Nevada was covered by a shallow sea. But as the sea retreated, limestone and shale formations were created from the remnants of plants and animals that had been combined with sediments eroded from older rock.

Approximately 18 million years ago, the area surrounding present-day Lake Mead was profoundly influenced by tectonic activity. The thinning of the earth’s crust was complemented by a series of earthquakes, resulting in dip-slip and strike-slip faulting in the area.

The thinning of the earth’s crust also allowed magnesium-rich magma and basalt to cover the landscape. Today, evidence of the region’s volcanic past can be observed at Fortification Hill, Black Canyon, and Callville Mesa.

An ancient stratovolcano, the Hamblin-Cleopatra Volcano, also lies along Lake Mead’s northern shore. Cleopatra-Hamblin formed in the late Miocene epoch along the Hamblin Bay Fault. Though the now-dormant volcano once reached over 3,000 feet (914 m) high, extensive faulting in the region has since split the stratovolcano into three parts.

The region’s extensive volcanic and tectonic activity eventually subsided, allowing water to travel through the fractured landscape and shape the region’s incredible waterways and canyons. 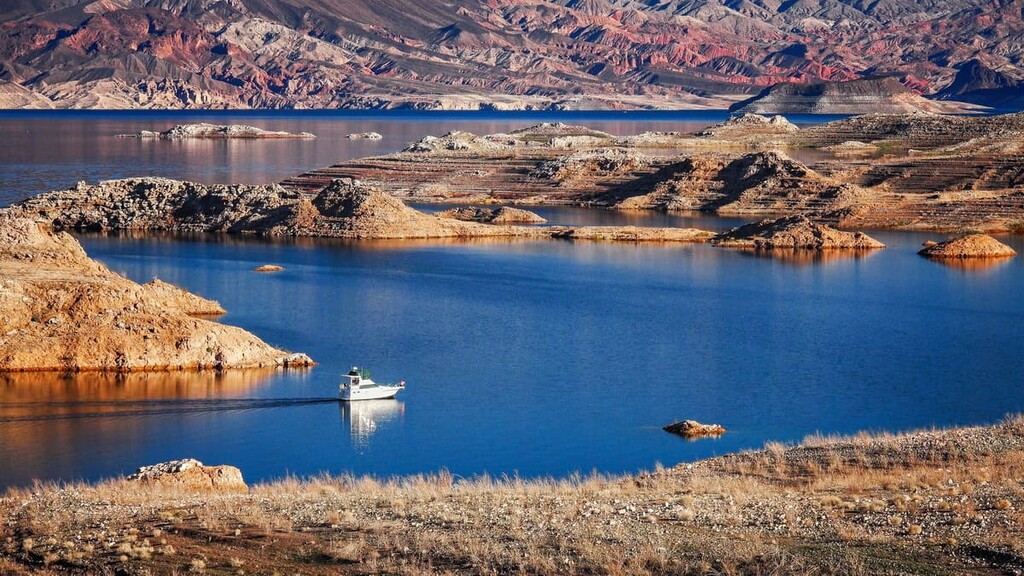 The Lake Mead National Recreation Area protects three desert ecosystems: the Mojave, the Great Basin, and the Sonoran. As a result, the area is rich in ecological diversity and protects several rare and endangered species.

The Lake Mead National Recreation Area also protects a wide variety of animal species, including desert bighorn sheep, coyote, rabbit, beaver, and mule deer. Due to its location along a north to south migration route, the Lake Mead area has recorded roughly 240 different kinds of bird species, including the peregrine falcon, burrowing owl, and bald eagle.

The desert tortoise, an endangered resident of the Lake Mead area, thrives in Lake Mead’s desert valleys and spends much of their time in burrows, emerging infrequently to feed and mate. Other endangered species in the area include the bonytail chub and razorback suckers.

Long before the completion of the Hoover Dam in 1936, the present-day Lake Mead National Recreation Area was occupied by numerous Indigenous communities, including Ancestral Puebloans, the Patayan, the Basketmaker-Pueblo, as well as the contemporary Hualapai Tribe, and Southern Paiute nations.

Archaeological evidence in the area suggests that despite the region’s taxing climate and limited natural resources, Indigenous communities flourished by employing advanced hunting, gathering, and building techniques. Dozens of structures and ancient artifacts, including pit houses, pueblos, cliff-side dwellings, weapons, pottery, and skeletal remains have been unearthed in the Lake Mead area.

In the mid and late 1800s, however, gold and silver were discovered in the southern Nevada mountains, which prompted a surge in white settlement. In the late 1800s, Mormon settlers, who mistakenly thought they were in Utah and Arizona, established a settlement along the confluence of the Muddy and Virgin Rivers that’s now known as St. Thomas.

The community was abandoned by Mormon settlers in 1871, when the state of Nevada attempted to collect taxes from residents. However, the fertile land and abundance of salt mining opportunities in the area, immediately enticed more to the area.

In 1928, President Calvin Coolidge signed legislation to erect a dam on the Arizona-Nevada border to divert irrigation water to the growing southwest. The Hoover Dam was finalized in 1936 and flooded St. Thomas, burying it beneath Lake Mead. Decades of drought, however, eventually exposed the ruins of St. Thomas and they are now protected as a national historic site. 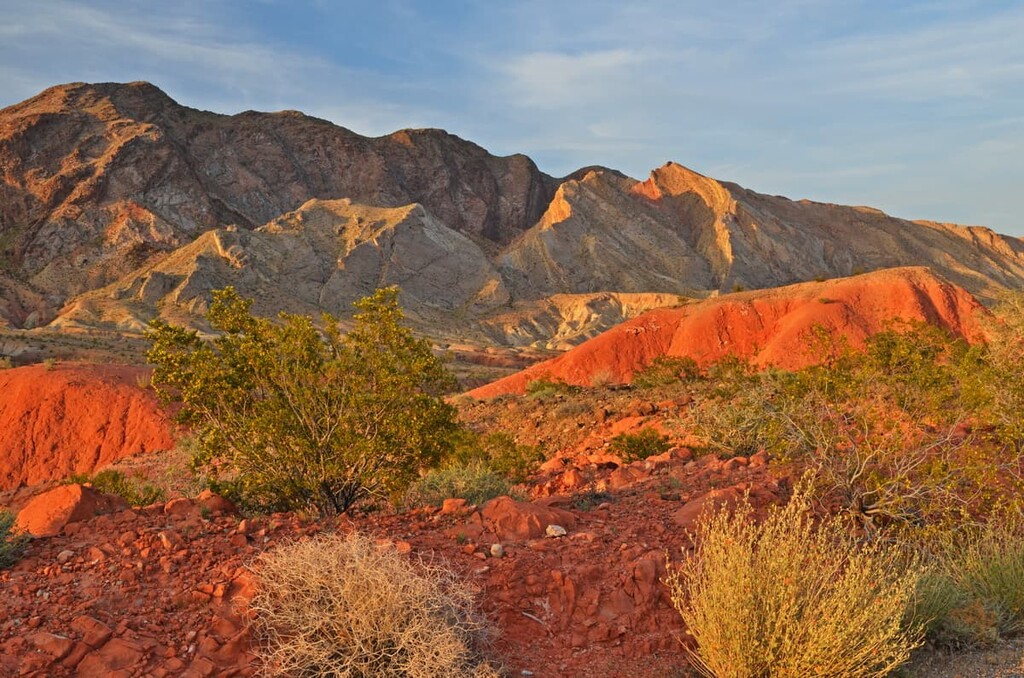 In 1964, the 1.5-million-acre (607,028 ha) Lake Mead National Recreation Area was established to preserve the region’s incredible natural features and allow visitors to explore the area’s many recreational opportunities.

The Lake Mead National Recreation Area best-known for its water-based recreation. However, there are several historic and scenic hiking trails to explore. These are some of the most popular trails in the area:

The Historic Railroad Trail is a wide and flat gravel trail that features beautiful vistas of the Boulder Basin and the Hoover Dam. The trail follows a historic 1930s railroad that was built to haul equipment and materials to the construction site of the Hoover Dam.

Though the tracks were dismantled in the 1960s, the present-day, multi-use trail allows visitors to learn about the historic railroad and walk through several impressive tunnels carved from volcanic rock. 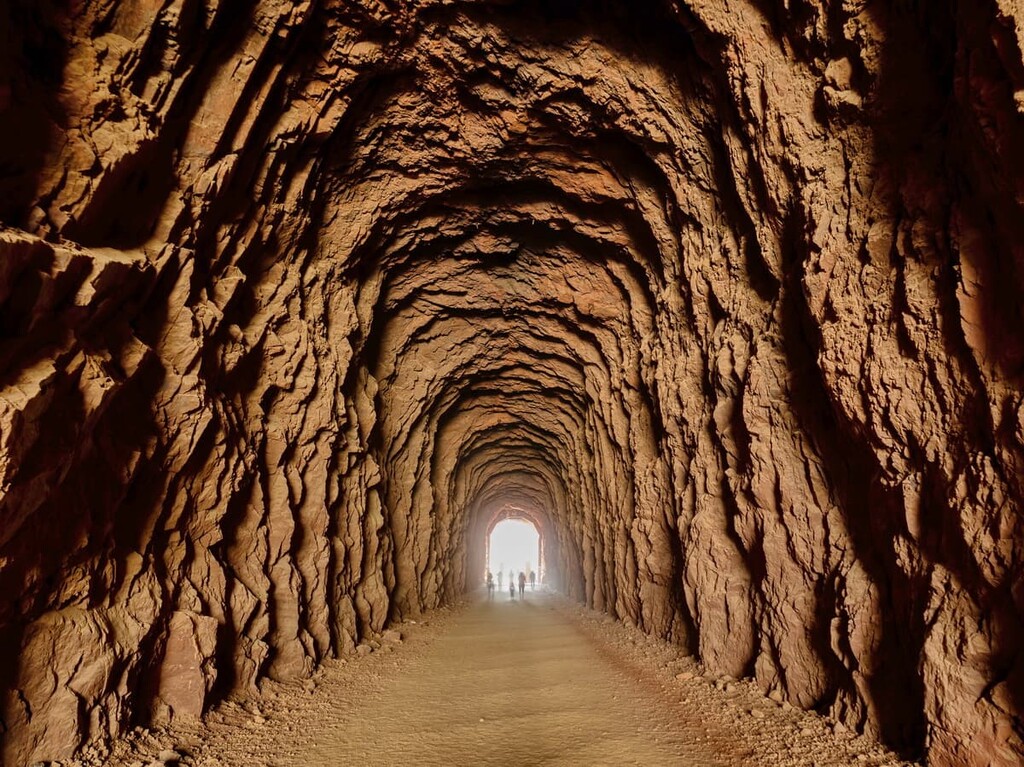 Nestled at the edge of Lake Mead, Owl Canyon gets its name from barn owls that occasionally roost in the slot canyon. Owl Canyon is a short slot canyon cut through conglomerate rock. The trail begins with a descent along an unmaintained path.

From there, the footpath climbs toward the mouth of the canyon. Visitors are encouraged to keep an eye out for evidence of owl activity by looking scouring the canyon walls for ‘white wash.’ 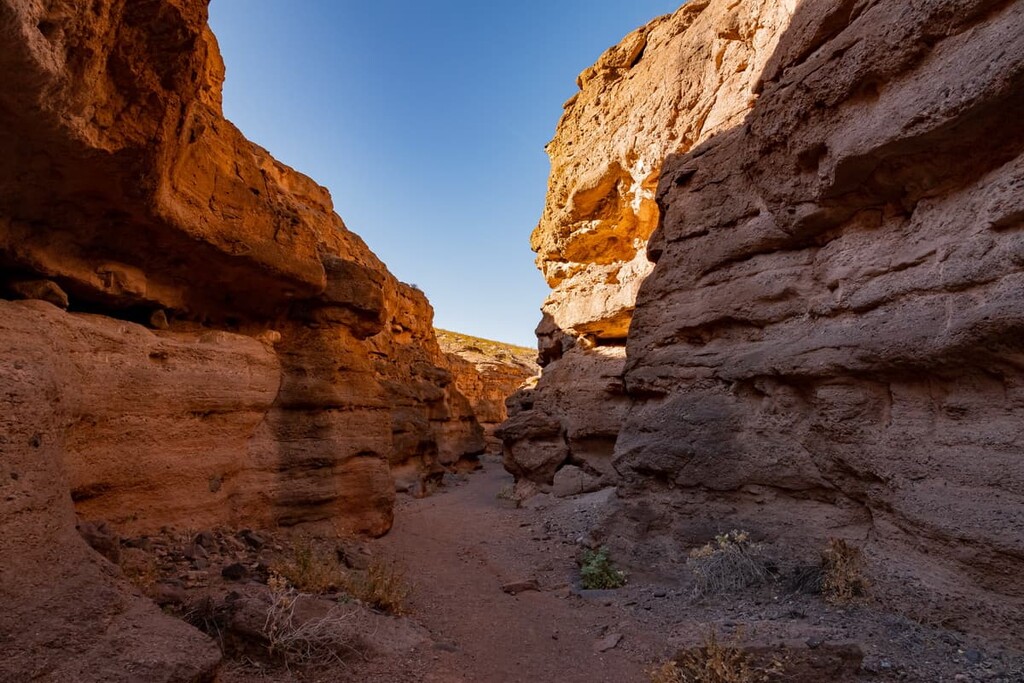 Located along the upper reaches of Black Canyon, the Gold Strike Hot Springs trail winds through a rugged, weathered canyon to a cluster of stunning aquamarine hot springs.

Though popular, the trek to Gold Strike isn’t easy. Hikers have to descend several challenging obstacles, many of which require scrambling or navigating fixed ropes. It’s important to note that due to dangerous temperatures, the springs are closed from May to September.

Named for its resemblance to the famous Liberty Bell at Independence National Historic Park in Pennsylvania, Liberty Bell Arch is one of the most popular natural features in the Lake Mead National Recreation Area.

The trail begins by following a sandy wash before dropping into White Rock Canyon. From there, the trail steadily climbs away from the canyon, passing abandoned mining equipment, before reaching a scenic overlook.

From the overlook, the trail quickly descends, and hikers are rewarded with their first glimpse of Liberty Bell Arch. Due to extreme temperatures, the Liberty Bell Arch is inaccessible from May 15 to Sept 30. 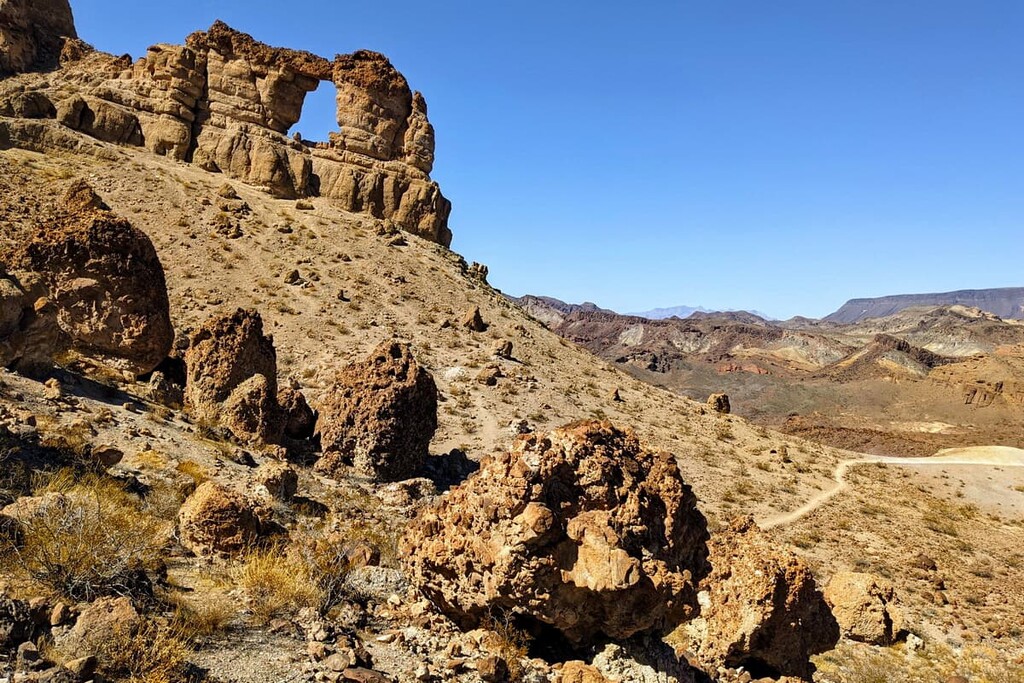 Looking for a place to stay during your visit to Lake Mead National Recreation Area? Here are some of the nearby cities and towns to check out:

Las Vegas is best-known for dazzling lights and extravagant entertainment. However, the city’s abundant amenities and lodging options also make it an excellent destination for exploring nearby parks and wilderness areas.

offers a variety of amenities to travelers. Boulder City is a popular destination for visitors looking to learn about the fascinating history of the Hoover Dam.

Established by Mormon pioneers, Overton lies near the Moapa Valley at the northern end of

Lake Mead. Overton is a great option for visitors looking to explore Valley of Fire State Park and or the Lost City, a cultural site of the Ancestral Puebloans.

Road between Boulder City and Overton in Nevada

Visitors to Bullhead City can easily access Lake Mohave and Lake Mead, or travel to nearby Dead Horse Ranch State Park to explore dozens of hiking trails and scenic overlooks. 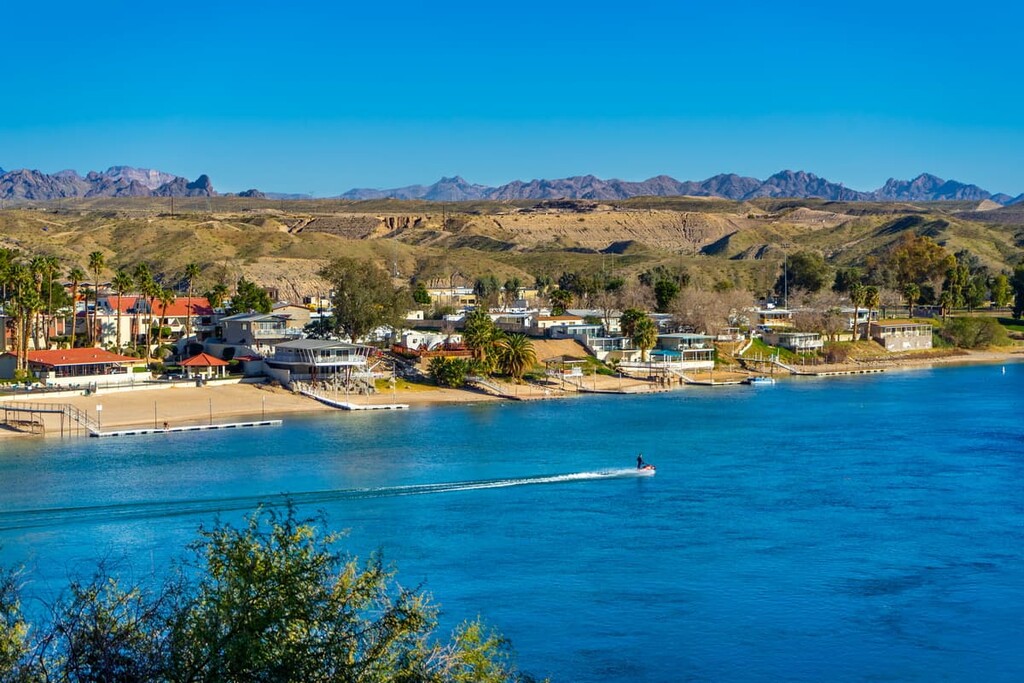