Coconino National Forest is a protected nature reserve located in the US state of Arizona. The forest is home to a diverse array of landscapes and it contains 259 named mountains. The tallest and most prominent peak in the forest is Humphreys Peak at 12,635 ft (3,851 m) with 6,037 ft (1,840 m) of prominence. 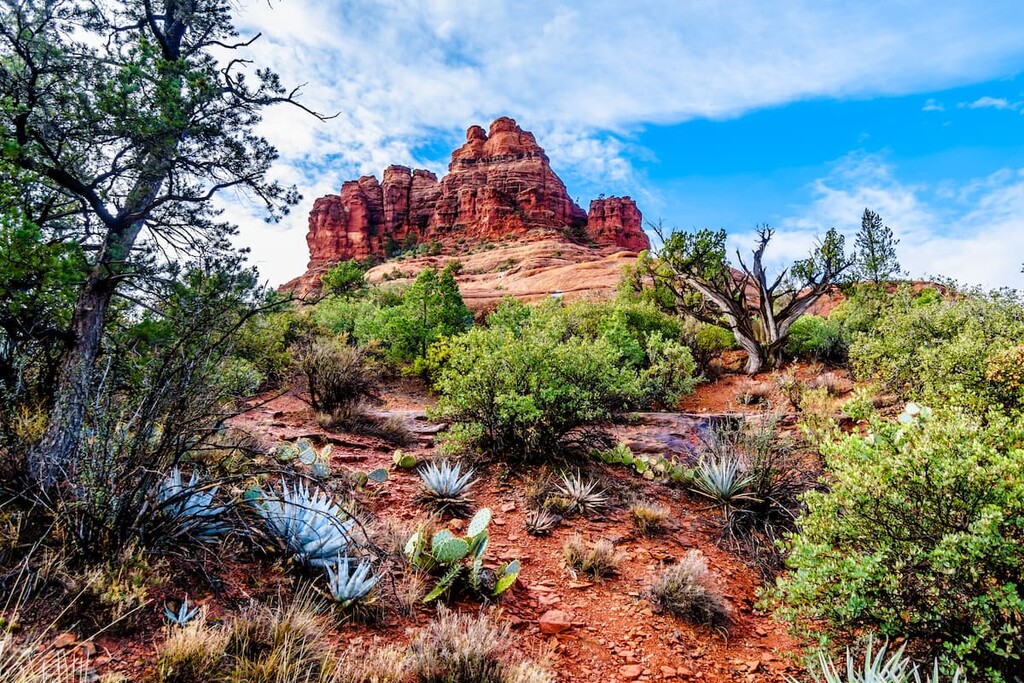 Much of the forest is situated on the high elevation plateau with the average elevation sitting at around 7,000 ft (2,100 m). Coconino National Forest is often broken down into three main sections, each with its own unique ecological characteristics.

The San Francisco Peaks are part of the massive San Francisco Volcanic Field. Due to the once high density of volcanic activity in the region, the Flagstaff District is home to lava towers and lava tubes. Craters and natural lakes are also scattered throughout this forested region.

Meanwhile, the Red Rock District of the forest surrounds the city of Sedona. True to its name, this region is dominated by its red colored rock formations and valleys. This region is also home to both Oak Creek Canyon and Sycamore Canyon.

The third district of the forest is the Mogollon Rim District, which is situated to the east of the Red Rock District. This section is home to an assortment of smaller lakes, as well as sections of ponderosa pine forests.

The Coconino National Forest contains all or part of 10 federally designated wilderness areas. These include:

The dominant feature of the Coconino National Forest is the San Francisco Peaks. The landscape visible today is what remains of the once larger stratovolcano known as San Francisco Mountain. This section of Arizona is home to a multitude of relatively young volcanic peaks.

The San Francisco Volcanic Field formed due to its location on a geological hotspot. The North American Plate continues to move across this hotspot, resulting in a historically high number of volcanoes in one area.

San Francisco Mountain formed around 1 million years ago after a number of large volcanic eruptions. Over the course of hundreds of thousands of years, the mountain was eroded to create the basin that dominates central Arizona today. Lava domes are also found throughout the region. These domes formed by overlapping lobes of lava.

The landscape of Coconino National Forest is dominated by evergreen vegetation such as conifers. Deciduous trees are rare due to the minimal amounts of rainfall throughout the region. Ponderosa pine are by far the most common plant species in the forest.

Lower elevations, typical of the southwestern region of the forest, are home to a variety of shrubs with trees being less common. Juniper trees, along with Arizona cypress, pinyon pine, yuccas, and prickly pear cacti, can be found at elevations of 4,500 to 6,500 ft (1,400-2,000 m).

Higher elevations of around 6,500 to 8,000 ft (2,000- 2,400 m) are home to vast forested sections of ponderosa pine. Other trees at these elevations are Rocky Mountain juniper, quaking aspen, and gambel oak.

The diverse landscapes of the forest allow for a multitude of animal species to thrive. Common animals in the Coconino National Forest include prairie dogs, pronghorn, deer, and elk. Populations of black bear and mountain lions are also found throughout the forest. Sightings of bald eagles and blue herons are also high within Coconino National Forest.

Coconino National Forest contains both the Palatki and Honanki Heritage Sites, which stand as a testament to the long human history of the region. Indeed, cliff dwellings of the Sinagua people in the region date back to 1100 to 1400 CE.

The Sinagua people once occupied a large region of central Arizona around San Francisco Mountain. Other historical sites in the region date back to 650 CE. During this time the Sinagua people planted crops and made pottery with the local materials.

Besides the cliff dwellings there are also pictographs and petroglyphs throughout the archaeological site. Some of these symbols are thought to be created around 3,000 to 6,000 years ago.

The region that is now part of Coconino National Forest is also the traditional territory and ancestral homelands of many tribal nations. This includes multiple Yavapai nations, the Hopi Tribe, the Tonto Apache Tribe, the Hohokam, and a number of Pueblo nations.

The first people of European descent began visiting the region in the 1700s. Settlers in the region quickly started forcing Indigenous peoples off of their homelands, particularly as the region became a popular stop on the wagon road to California. This westward immigratinon of US citizens continued in the aftermath of the Treaty of Guadalupe Hidalgo in 1848, which ceded the territory from Mexico to the United States.

By the late 1880s, Flagstaff became one of the largest cities in the region, especially after the introduction of the railroad. Eventually, the region became a popular site for logging operations, especially around the San Francisco Mountains.

In response to this logging, President William McKinley established the San Francisco Mountains National Forest Reserve in 1898 due to pressure from Gifford Pinchot. This was a highly controversial move at the time as many settlers in the region saw the reserve as an attack on their livelihoods.

Just a few years later, the San Francisco Mountains National Forest Reserve, alongside all other forest reserves at that time, was transferred from the Division of Forestry to the Department of Agriculture to be administered by the US Forest Service. This move also re-designated the reserve as a national forest.

Ten years after the establishment of the forest reserve, the San Francisco Mountains National Forest was combined with parts of the Tonto, Grand Canyon, and Black Mesa national forests to become the Coconino National Forest that we know of today.

Coconino National Forest is home to numerous trails that span across the region. Here are some of the top hiking areas to visit in the forest:

Devil’s Bridge Trail is the most popular route in the entire forest. The out and back trail totals 3.9 miles (6.3 km) with 521 ft (159 m) of elevation gain. The bridge consists of the largest sandstone arch in the forest. Though relatively short, Devil’s Bridge Trail offers impressive views of the red rocks. A natural staircase leads to the top of the bridge with the forest spanning out down below.

Cathedral Rock Trail is an out and back route that is just 1.2 miles (2 km) long with 741 feet (226 m) of elevation gain. Located just outside of Sedona, the trail has views of the distinct rock formations of the region. From the top hikers can look out over the rolling red rocks and canyons in the nearby distance.

Fay Canyon Trail is 2.6 miles (4.2 km) with 383 feet (117 m) of elevation gain. The route offers an accessible walkway through a box canyon as the red walls tower above on either side. Old dry creek beds line the bottom of the canyon and hikers can see Fay Canyon Arch about halfway through the route.

Looking for a place to stay near Coconino National Forest? Here are some of the best cities and villages to check out in the region:

Located in the heart of the Coconino National Forest lies the city of Flagstaff. The city has a population of around 75,000 and is known for being an outdoor recreation paradise. Situated at 7,000 feet (2,130 m) of elevation, Flagstaff is surrounded by one of the largest contiguous ponderosa pine forests in all of North america.

Flagstaff’s close proximity to Grand Canyon National Park makes it popular amongst tourists throughout the year. Being surrounded by protected land, the city is a hub for hiking, mountain biking, and trail running.

Situated to the south of Flagstaff, and also located within the national forest, lies the city of Sedona. The city has a population of around 10,000 people and it is known for its abundance of red sandstone formations. Hundreds of hiking, trail running, and mountain biking trails surround the small city. Besides its plethora of outdoor activities, Sedona is also home to wineries and a thriving local arts scene. 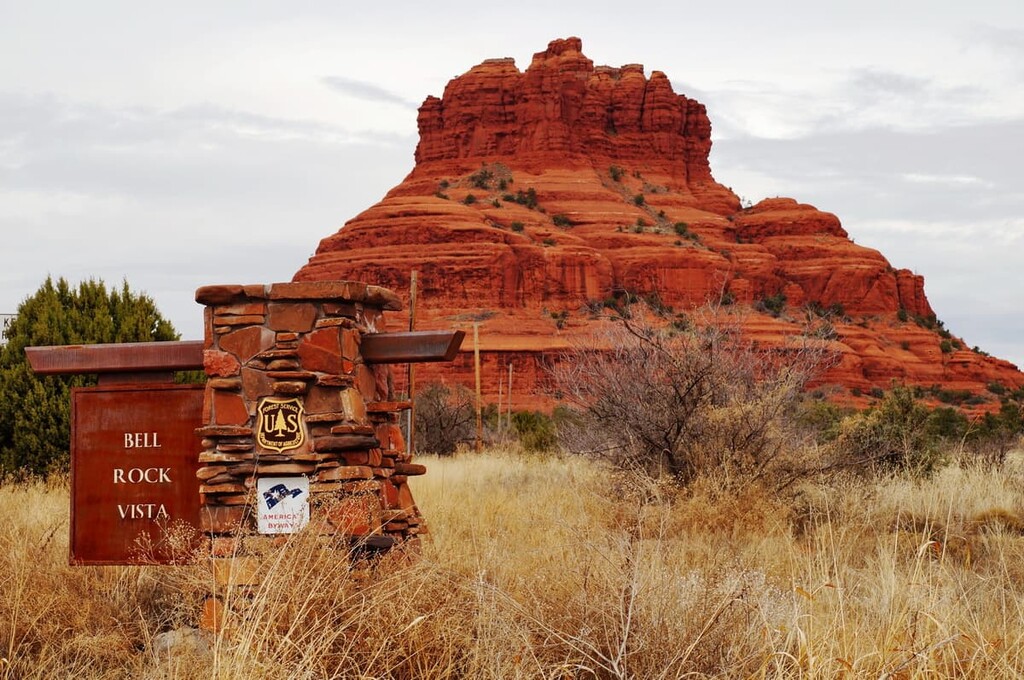 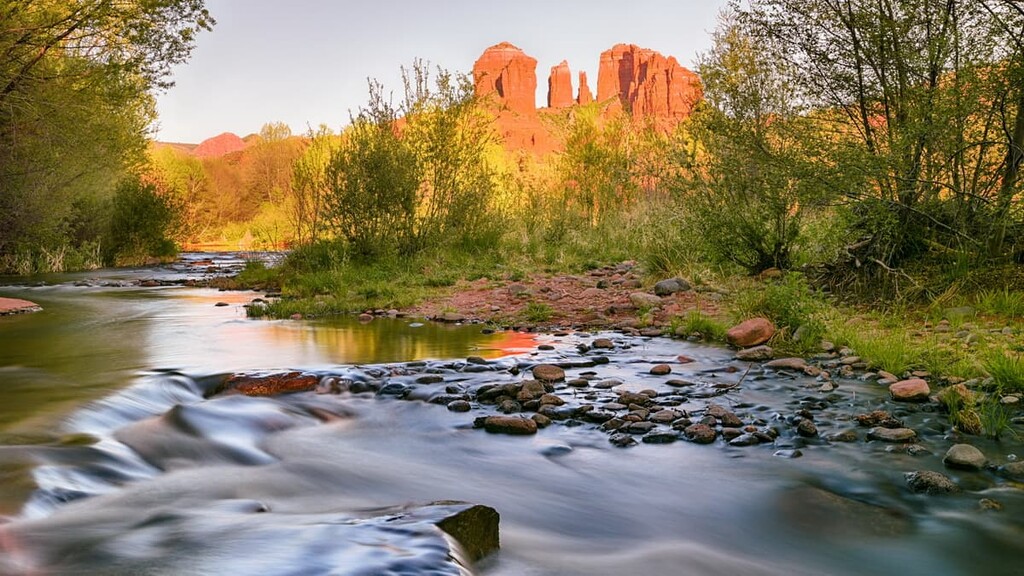 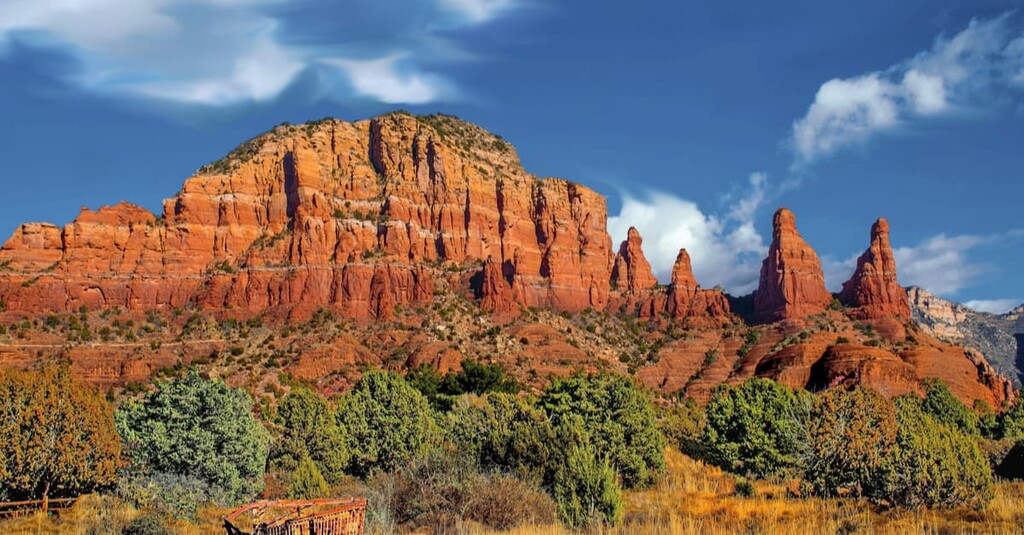 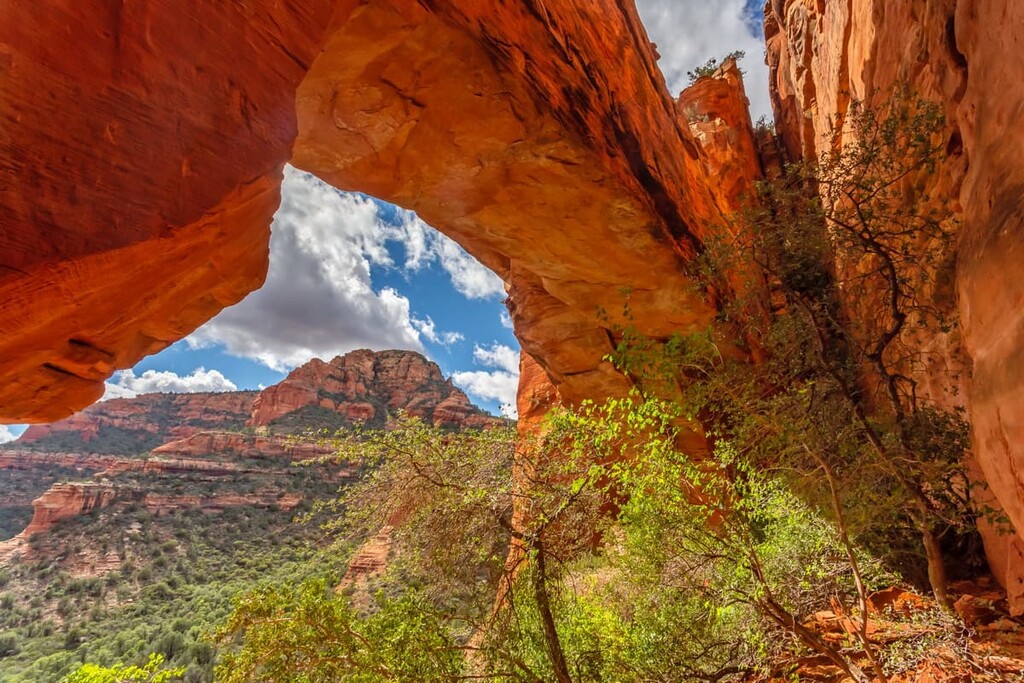 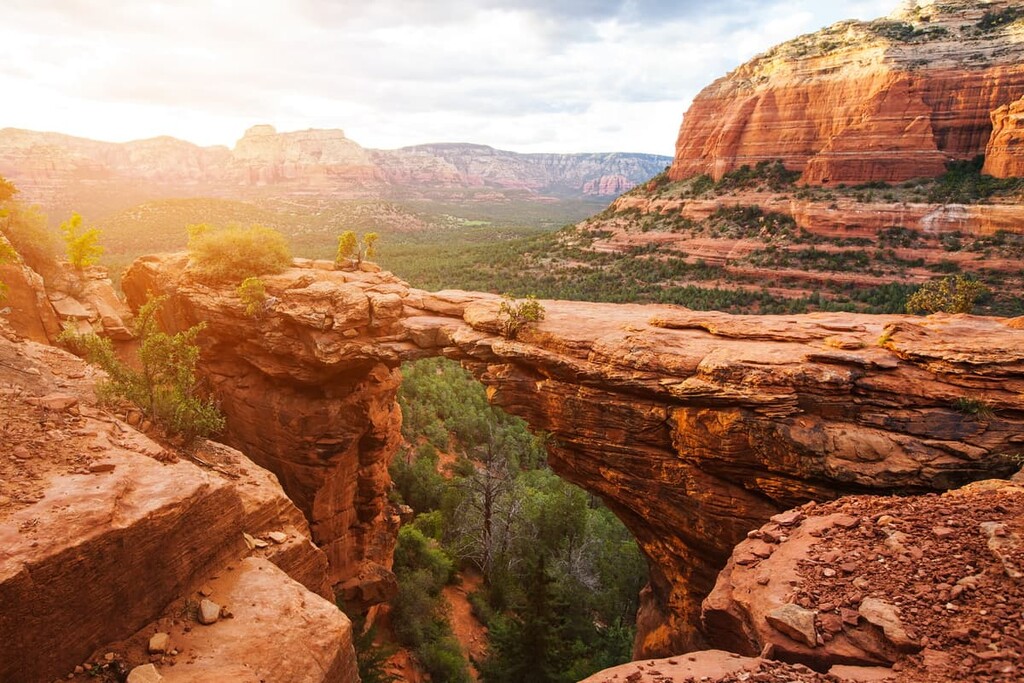 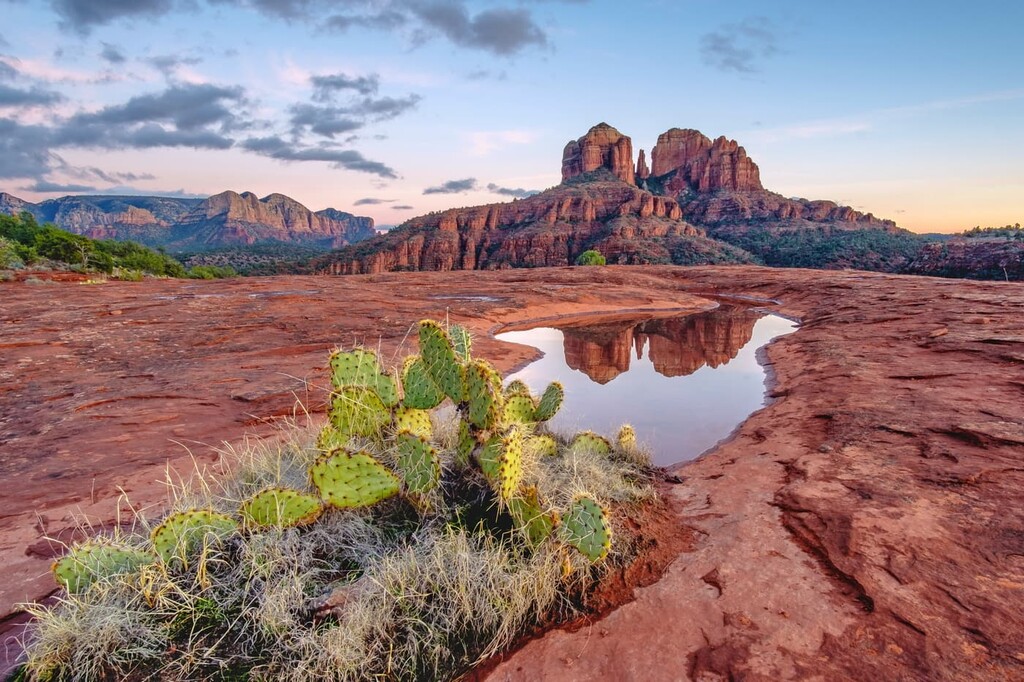 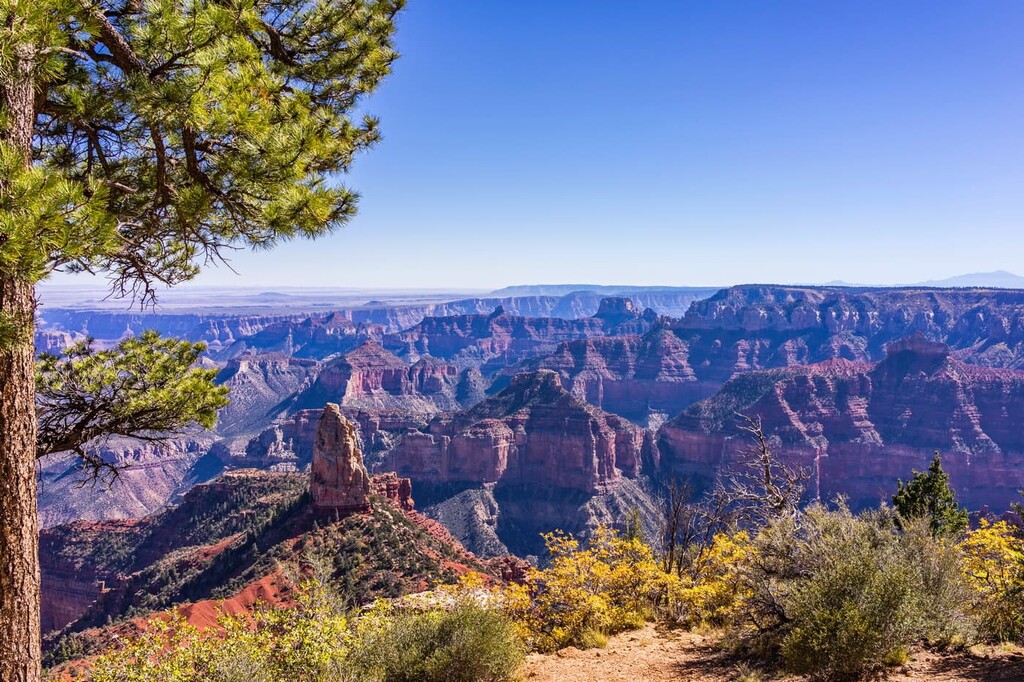