Located in the US state of Arizona, the Red Rock-Secret Mountain Wilderness protects 43,950 acres (17,786 ha) of pinnacles, arches, cliffs, buttes, and canyons within Coconino National Forest. There are 31 named mountains in the Red Rock-Secret Mountain Wilderness. The highest point is East Pocket Knob (7,185ft/2,190m), and the most prominent peak is Capitol Butte (6,362ft/1,939m). 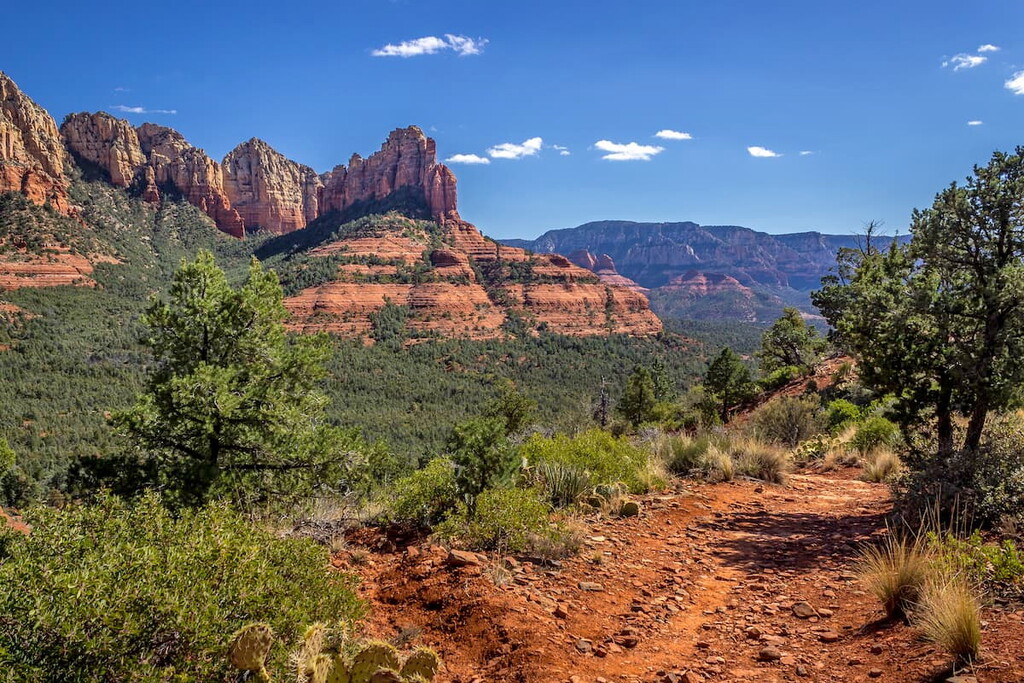 The Red Rock-Secret Mountain Wilderness lies in the Red Rock Management Area within the Coconino National Forest in the central part of the US state of Arizona. The region is characterized by wind-swept pinnacles and spectacular scenery, making it a spectacular place to hike and adventure.

However, despite its proximity to two major epicenters of outdoor recreation—Flagstaff and Sedona—the Red Rock-Secret Mountain Wilderness has retained its rugged and isolated ambiance.

The Sycamore Canyon Wilderness and high mesas of Secret Mountain lie to the west, while Oak Creek Canyon, an incredible gorge carved into the edge of the Mogollon Rim of the Colorado Plateau, defines the park’s eastern boundary. To the south, the 18,150-acre (7,345 ha) Munds Mountain Wilderness and Red Rock State Park extend to the doorstep of Sedona and Oak Creek.

Most visitors to the area will travel State Route 89A, the Sedona-Oak Creek Canyon Scenic Road, which is located along the eastern edge of the Red Rock-Secret Mountain Wilderness. This National Scenic Byway is the gateway to exploring Sedona’s iconic red-rock buttes and it is regularly used to access hiking trails along Oak Creek Canyon and Slide Rock State Park.

The Red Rock-Secret Mountain Wilderness lies along the edge of the Mogollon Rim, a striking escarpment nestled in Arizona’s Transition Zone Province between the Colorado Plateau and Basin and Range zones. This transition zone is composed of sedimentary, igneous, and metamorphic rocks.

The colorful cliffs of the Mogollon Rim were formed by catastrophic upturns and volcanism followed by flooding and erosion during the Mesozoic era. The Mogollon Rim contains limestone and sandstone formed during the Carboniferous and Permian Periods, and in many places, the Rim is capped or buried beneath extensive basaltic lava flows.

Another one of the region’s incredible natural features, Oak Creek Canyon, contains mostly Paleozoic sedimentary rocks, though exposures of the Kaibab Limestone and the Toroweap Formation can also be found along the northern end of the canyon. Red Sandstone and Coconino Sandstone can also be found along the cliffs of the southern Oak Creek Canyon.

Oak Creek Canyon formed above a fault hundreds of millions of years ago. Roughly 65 million years ago, during the Laramide orogeny, movement along the Oak Creek Fault caused the east side of ancestral Oak Creek Canyon to shift upward by nearly 600 feet (183 m). Eventually, the exposed eastern fault block would erode to nearly the same elevation as the western block.

The Red Rock-Secret Mountain Wilderness was originally home to the Southern Sinagua between 1150 to 1300 CE. Many of the park’s canyon walls and cliff dwellings contain preserved petroglyphs and pictographs crafted by the ancestral Sinagua people.

Arguably the most impressive sites tucked in the wilderness are the Honanki and Palatki sites, which contain remarkable prehistoric pictographs that span the range of human occupation of the Verde Valley. These sites were the largest cliff dwellings of the Red Rock country.

The Sinagua people left the area around 1300 CE to continue their migrations. However, many Hopi people believe that their ancestors, the Hisatsinom, are the Sinagua people.

The area surrounding the Red Rock-Secret Mountain Wilderness, including the Verde Valley, Colorado Plateau, and most of present-day Coconino County, was once occupied by several Indigenous tribes, including the Hopi, Havasupai, Pai (Yavapai and Walapai), and the Paiute.

The Yavapai arrived in the Verde Valley around 1300 CE, while the Apache are believed to have arrived around 1450 CE.

The first European travelers in the region took place in the late 1500s by Spanish explorers searching for gold. The largest influx of settlers of European descent, however, began after the establishment of the Arizona Territory in 1863. Early colonizers took preemption homesteads, or squatters rights, and by the late 1800s, both the Yavapai and Apache people had been forcibly removed from the area.

Miles of hiking trails crisscross through the Red Rock-Secret Wilderness, many of which boast sprawling views of the region’s infamous red rock formations. These are some of the most scenic hiking trails in the area:

This easily accessible 6-mile (9.7 km) trail traverses through some of the most spectacular red rock spires, buttes, and mesas in the wilderness. The trail itself is considered moderate, though there is a relatively steep climb to reach the final overlook.

The views, however, are well worth the effort. The final vista along this scenic trail sits within an impressive box canyon surrounded by 1,200-foot (366 m) vertical sandstone cliffs. Though the trail has increased in popularity over the last few years, Boynton Canyon remains relatively isolated from some of the more popular footpaths in and around Sedona.

However, hikers willing to make the effort are rewarded with spectacular views of the surrounding wilderness. The challenging terrain and difficulty of Bear Mountain often deters crowds, making this an excellent option for visitors looking for solitude.

Arguably one of the most unique natural features in the Red Rock-Secret Mountain Wilderness, the seven sacred pools were crafted from an elaborate sandstone canyon and are fed by a seasonal stream.

The sacred pools were considered a valuable source of drinking water to the Apache and Yavapai. The trail can be accessed via the Soldier Pass Trail. While en route to the seven sacred pools, hikers can also check out Devil’s Kitchen, a massive sinkhole that formed in the 1880s.

Though Secret Canyon isn’t exactly a secret, it boasts some of the most remarkable vistas of red rock formations in the area.

This popular 11-mile (17.8 km) trail meanders into the mouth of the canyon, passing various pine and juniper trees, shrubs, and ferns along the way. After just 2 miles (3.2 km), hikers are rewarded with striking views of the region’s iconic red rock formations.

Climbing to the highest point in Sedona isn’t an easy feat. However, those willing to endure the 2,300-foot (701 m) climb will appreciate the peak’s panoramic views of Oak Creek Canyon, Sedona, Coffee Pot Rock, Capitol Butte, Sterling Canyon, and the Verde Valley. There are two trails to the top of Wilson Mountain, but the North Wilson trail is the most popular.

Originally used by the family of Samuel Loy in the 1880s to move livestock, the Loy Canyon Trail follows the fence line of the Hancock Ranch before quickly ascending to the top of the Mogollon Rim.

Along the way, hikers can expect plenty of vistas of colorful rock formations. A small spur trail off the Loy Canyon Trail also leads to Loy Butte, a 5,679-foot (1,731 m) summit that features ancient ruins.

Looking for a place to stay during your visit to the Red Rock-Secret Mountain Wilderness? Here are some of the nearby cities and towns to check out:

Located near the southwestern rim of the Colorado Plateau, at the mouth of Oak Creek Canyon, the city of Sedona is one of Arizona’s top tourist and recreation towns.

Surrounded by otherworldly rock formations, this cherished community is home to 400+ trails, dozens of charming eateries, a variety of accommodations, as well as dozens of cultural centers, art galleries, and shops.

Known as the gateway to the San Francisco Peaks, Flagstaff is best-known for its cultural diversity, natural beauty, and incredible outdoor recreation options. Located just 40 miles (64 km) from the Red Rock-Secret Mountain Wilderness, Flagstaff is a vibrant community that draws outdoor enthusiasts from around the world.

Just 22 miles (35 km) to the southwest of the Red Rock-Secret Mountain Wilderness, the city of Cottonwood is nestled in the beautiful Verde Valley and is surrounded by incredible red-rock formations, state parks, and historic sites.

Though Sedona and Flagstaff generally see more visitors, Cottonwood is an ideal basecamp due to its surprisingly mild weather. Visitors to Cottonwood are encouraged to explore the Historic Old Town; fish, swim, or paddle the Verde River; and check out some of the city’s local trails and parks.

Like Cottonwood, Camp Verde’s central location and temperate climate make it an excellent option for visitors to the red-rock region. Camp Verde lies in the Verde Valley near the Montezuma Castle National Monument, just 40 miles (64 km) south of the Red Rock-Secret Mountain Wilderness.

Local attractions include the Fort Verde State Historic Park, Montezuma Castle, and Montezuma Well. Camp Verde isn’t a particularly large community. However, there are plenty of restaurants, accommodations, and amenities for visitors to enjoy. 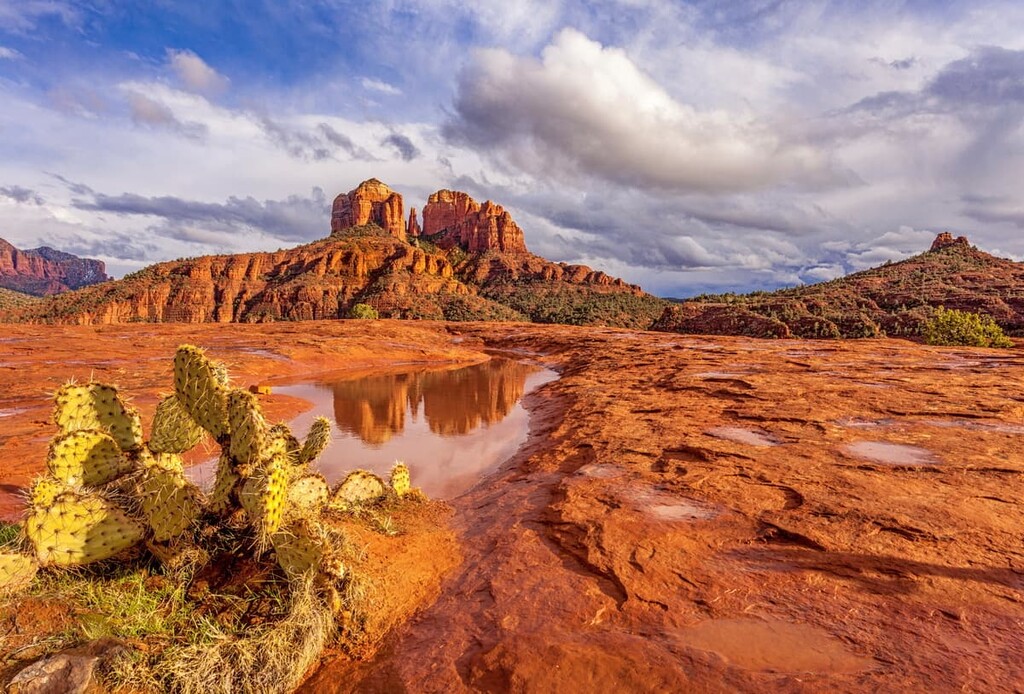 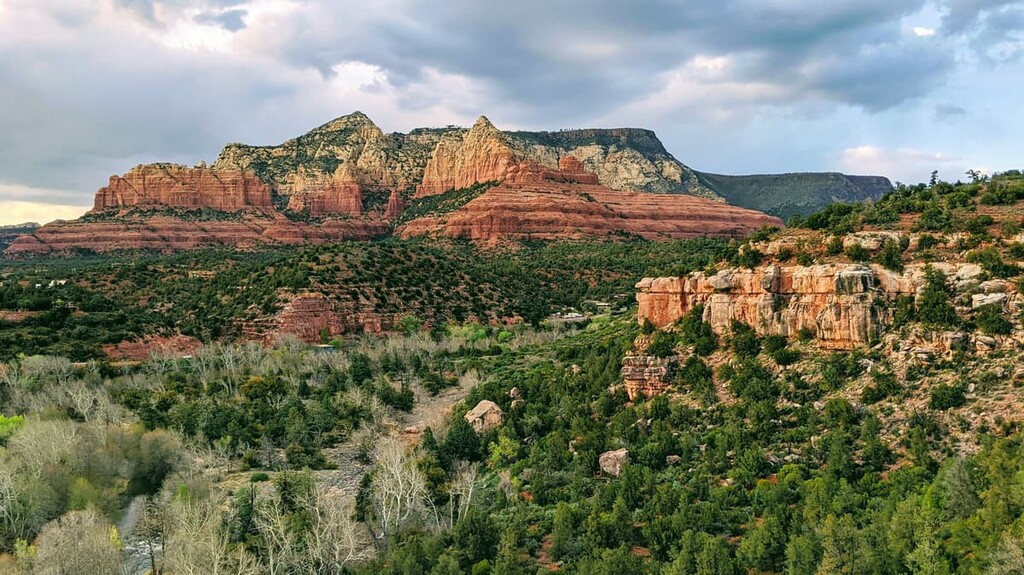 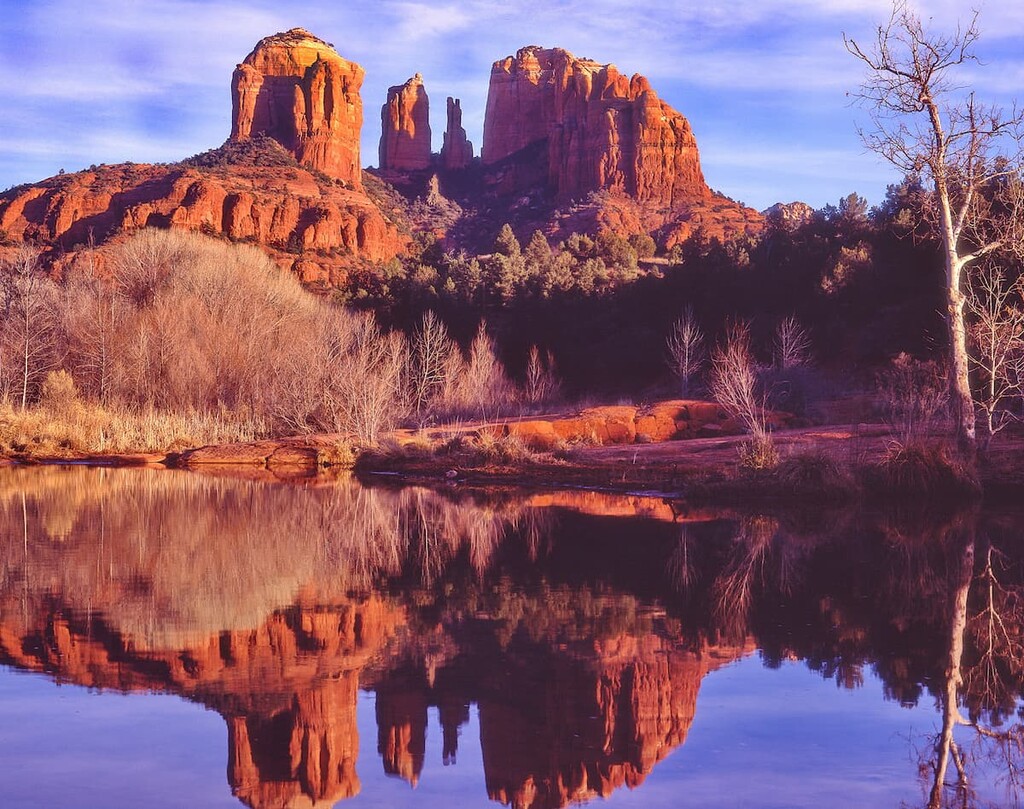 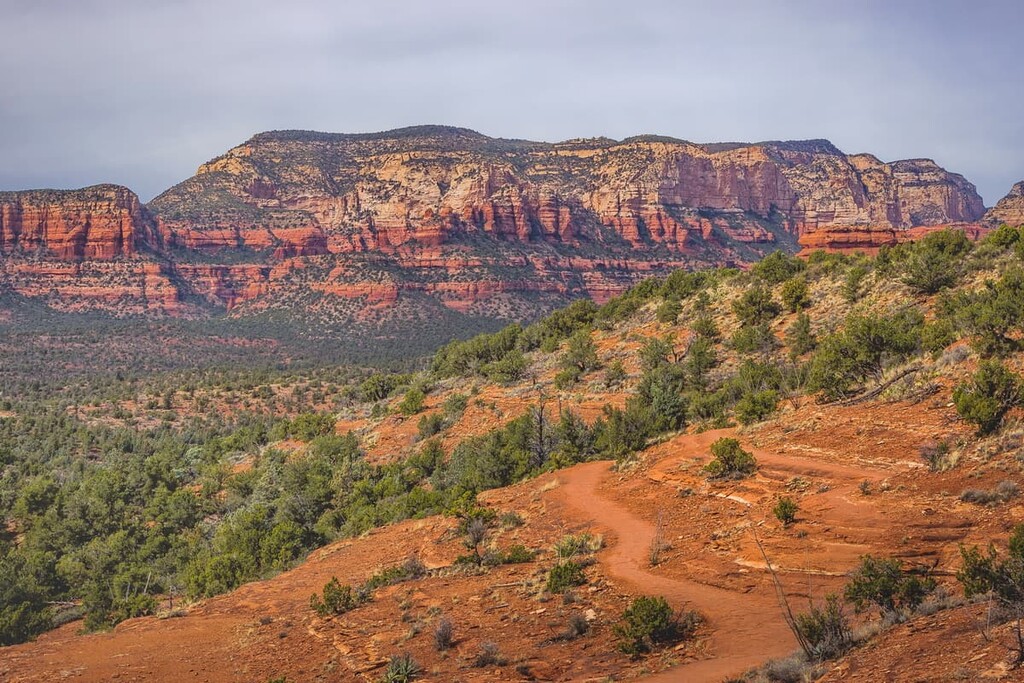 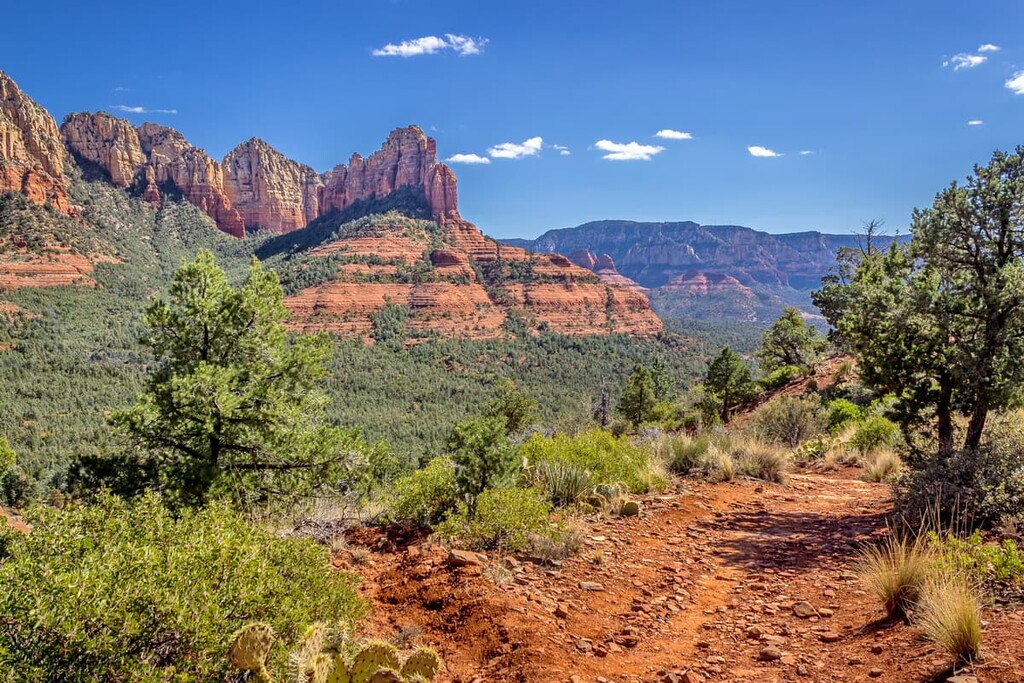 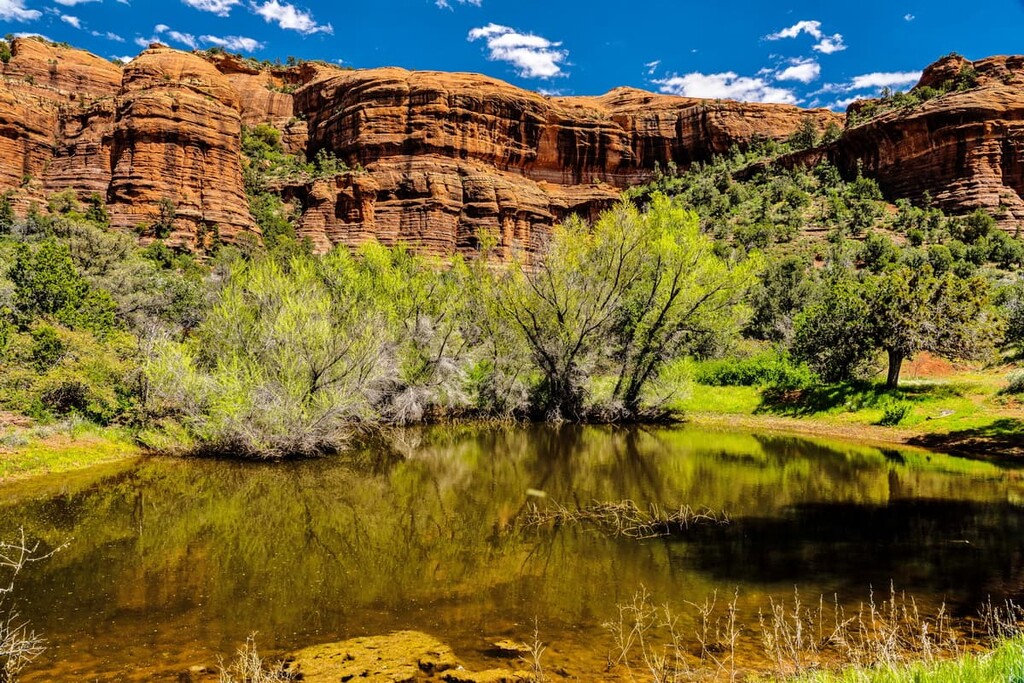