3 493 m
Elevation
Elevation is the altitude of a place
above sea level.

206 m
Prominence
Peak’s prominence is the least
vertical to be covered to get from the
summit to any other higher terrain.

Proportional Prominence 1 111 m
Location
35.329943 N  -111.646078 W
Doyle Peak is in the San Francisco Peaks of northern Arizona and is the fourth highest peak, but the sixth highest named point in the state of Arizona with an elevation of 11,464 feet (3,494 m). Both Aubineau Peak and Rees Peak are higher, but they do not have enough prominence to be considered independent peaks. In spite of the name "Doyle" on modern maps this elevation was known as "Schultz" Peak at least through the 1930s. "Doyle Peak" was traditionally the name of the ridge west of Fremont Peak. The elevation called "Schultz" on modern maps traditionally had no name. This information came from Dr. Henry Giclas <https://aas.org/obituaries/henry-l-giclas-1910-2007>, native and long time resident of Flagstaff, astronomer and Director Emeritus at Lowell Observatory, and son of the man responsible for developing the water well fields in the Inner Basin of the San Francisco Peaks. Dr. Giclas was unaware of the change and very puzzled by it when asked about the names c. 1985 <Personal Communication with Dr. H. L. Giclas>. The names of the saddles between the Peaks are consistent with the names of the Peaks related by Dr. Giclas, but they make no sense with the names on current maps. Furthermore, a body of published scientific research was based on observations conducted at Lowell Observatory's Schultz Peak Station, which still sits atop the subject Peak. There is a movement to officially reverse the apparently accidental changes on the USGS Humphreys Quadrangle Map. Rectification of the changes can come none too soon; others have noticed that the Peaks and saddles do not match and have made changes to the names of the saddles both in Google Earth and Google Maps in an effort to fix the errors. Unfortunately the errors are not in the saddles but in the names of the Peaks, themselves, so those changes have only multiplied the errors. The subject elevation will be referred to as "Schultz Peak" from here on.

Hiking Schultz Peak can be somewhat challenging depending on the route used, but it is not difficult to ascend. Care must be taken to avoid the scree slopes which can be seen from the south in Flagstaff. These slopes are quite steep and slide easily. The peak is most easily scaled by hiking the Weatherford Trail to Schultz Saddle, then following the old and now indistinct mule trail to the summit, or by following the ridge from Lockett Meadow. Schultz Peak is not the gently rounded mountain it appears to be from Flagstaff but a ridge oriented southwest to northeast. The area of the summit is rather flat and wide in several spots.

A small structure on the south side of the summit of Schultz Peak and referred to by some as a shepherd's cabin was actually built by Lowell Observatory in 1927 to house a telescope. The site was selected by Dr. V. M. Slipher, Director of Lowell Observatory, for a pair of Bristlecone Pine trees oriented in a north-south line so that they could be cut and pressed into service as supports for the Polar Axle of the telescope. The Polar Axle and telescopes were constructed by the Stanley Sykes of Lowell Observatory, and the cabin housing the telescope was constructed by Ramon Vilma (spelling?), a local stonemason <Personal Communication with Dr. H. L. Giclas>. The structure had a corrugated metal roof that could be rolled off to expose the telescope for observations. The Polar Axle was taken by truck on the then-new Weatherford Road to Schultz Saddle, then by mule to the Schultz Peak summit, and the two telescopes used there were hauled up in the same way. The telescopes were a 12-inch (30 cm) reflector and a 15-inch (38 cm) reflector. The observing site also had a small dormitory partially cut into the hillside east of the telescope, but only an indistinct depression remains. From 1927 until 1932 this was the highest astronomical observing site on Planet Earth. This distinction passed to the Swiss in 1932 when they commissioned a slightly higher observing site on the Jungfrau. The original purpose of the site was to make spectroscopic observations of planets, stars, and nebulae to exploit the increased atmospheric transmission - especially in ultraviolet and infrared wavelengths - at high altitude. A similar telescope and roll-off structure was constructed at the Mars Hill campus of Lowell Observatory so that spectroscopic observations made at the two sites could be compared. The telescope at Mars Hill is still in service and now mounts a 21-inch (53 cm) reflector. Today it is used by Dr. G. W. Lockwood to collect long-term data on variability of Solar Radiation and it has a fascinating history in its own right <http://www2.lowell.edu/users/wes/index.htm>. The telescopes and Polar Axle from the Schultz Peak site still exist, and one of the bearing assemblies from the original roll-off roof has been retrieved from Schultz Peak as a possible future museum exhibit.

Between 1931 and 1933 the Harvard-Cornell Meteor Expedition under the direction of Dr. Ernst Öpik, Dr. Harlow Shapley of Harvard, and Dr. Samuel L. Boothroyd of Cornell used Lowell's Schultz Peak Station as one of its meteor observing sites. They used the vibrating mirror technique developed by Dr. Öpik and Dr. Boothroyd to measure the velocity of meteors, and they recorded meteor tracks from two locations to compute the altitude of meteors by their parallax. The second observing site for parallax measurement was originally near Bellmont, AZ, but was later moved to Padre Canyon, AZ. In 1933 Dr. Boothroyd returned to test the new vacuum deposition technique of mirror coating that had recently been developed at Cornell University. Thus the telescope at the Schultz Peak Station was briefly the world's largest telescope coated by the new, superior aluminization technique. Vacuum aluminization remains the preferred method of coating telescope mirrors for all but a few very specific applications. Several of the astronomers who used the Schultz Peak Station made important contributions to Astronomy, and several scientific papers were published using data obtained at the Schultz Peak Station. This is a strong argument for correcting the naming error and returning the "Schultz" and "Doyle" names to their proper peaks.

The telescope and Polar Axle were removed from the Schultz Peak Station in 1937 by Dr. V. M. Slipher and some of the junior staff of the Lowell Observatory. The facility was abandoned and by the 1970s the roof had collapsed from years of neglect and winter snow, which can completely bury it. It was reconstructed about then by hikers as a cabin, though maintaining the structure is an ongoing process. Many hikers and campers leave supplies and provisions in the cabin or use them when needed. If you visit look for a waterproof container with a log book and other information. Also while you are there, look for the two Bristlecone stumps that defined the location. They are near the centers of the north and south walls of the cabin, the northern one being considerably taller. Please enjoy and help to preserve this unique and little-known Flagstaff treasure. 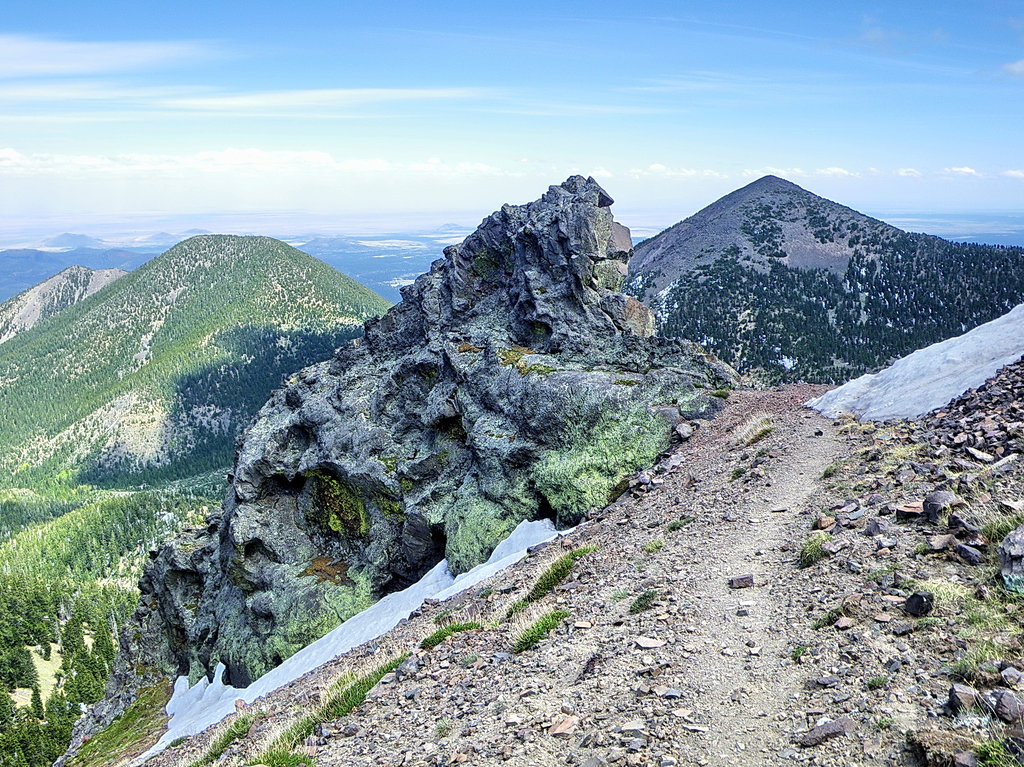 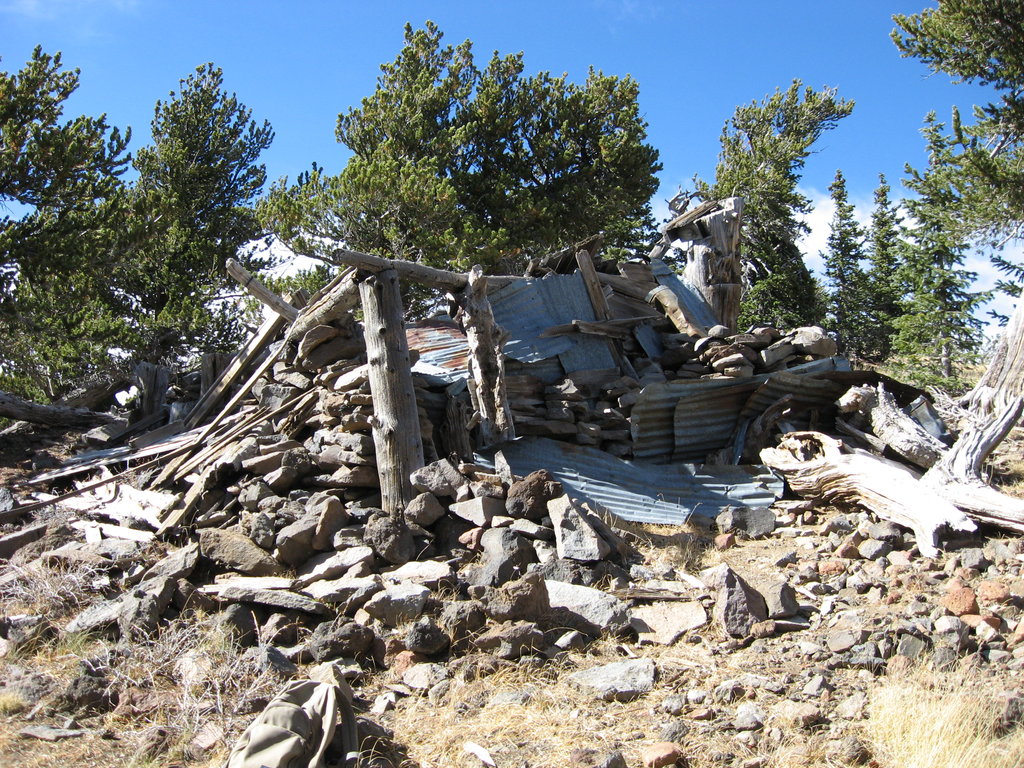