Home to vast deserts, rugged mountainscapes, and dense forest cover, Prescott National Forest is a gorgeous outdoor recreation area located in the west-central part of the US state of Arizona. The forest contains 143 named mountains, the highest and most prominent of which is Mount Union (7,969 ft/2,429 m).

Prescott National Forest is an area of federally managed land located in the west-central part of the US state of Arizona. It is mostly located within Yavapai County, though a small portion of the forest extends into Coconino County.

The forest is also split up into two non-contiguous sections. The western section mostly centers on the Bradshaw and the Santa Maria mountains while the eastern section is dominated by the hills to the west of the San Francisco Peaks area.

Prescott National Forest is located within the greater Colorado Plateau geophysical region. The Colorado Plateau extends throughout much of northern Arizona as well as parts of southern Utah, western Colorado, and northern New Mexico.

That being said, there are a number of mountain ranges in the Colorado Plateau. This includes the Bradshaw Mountains and the Santa Maria Mountains.

However, interestingly, the rocks of both the Bradshaw and Santa Maria Mountains are not the sedimentary rocks traditionally found throughout the Colorado Plateau.

Additionally, the Santa Maria Mountains are partly located in a large ancient volcanic field that dates back to the Miocene. Volcanism was relatively widespread throughout what is now Yavapai County during the Miocene. It left behind large deposits of basaltic rocks as well as granitic rocks. However, there are also some sedimentary layers in the region, too.

Prescott National Forest is home to a diversity of different flora and fauna. Due to the great differences in elevation found within the forest, the region also contains a number of plant communities.

At the lowest elevations in the forest, the landscape is dominated by interior chaparral and other scrubs. The region contains many plant communities of the northernmost part of the Sonoran Desert, including desert grasslands and desert scrub.

Wildlife is abundant in the national forest. Common species include foxes, mule deer, wild turkeys, porcupines, and even javelinas. Other notable species found in the forest include black bears, bobcats, and even mountain lions.

The land that is now part of Prescott National Forest has been inhabited by humans since time immemorial. Indeed, the region is the traditional territory of many Indigenous peoples. The region was home to the people of the Patayan culture (Hakataya culture) and the Hohokam culture.

During the 1840s, John C. Frémont led an expedition that traversed through what is now central Arizona on the way to what is now the border between Kansas and Missouri. Whether he and his expedition crossed into what is now the Prescott National Forest is not certain, but it is well documented that miners and prospectors began to flock to the area around Phoenix in the mid-1800s.

The region around what is now Prescott National Forest became politically very important as the city of Prescott was named the capital of the Arizona Territory. Around the same time, the Walker Party found gold in Lynx Creek, which set off a gold rush in the region.

By the late 1800s, the forests around Prescott Basin became a source of intrigue for local conservationists. Soon afterward, in 1898, President William McKinley designated the Prescott Forest Reserve. The original reserve contains 16 parcels of land and it was created to protect the region’s watershed after the extensive logging that happened in the Bradshaw Mountains as a result of regional gold discoveries.

The forest reserve was then designated as a national forest in 1908. At the same time it absorbed the lands of the former Verde National Forest. Although the forest’s boundaries have changed many times since its initial designation, it continues to be one of the most popular outdoor recreation destinations in the region.

Prescott National Forest is a true hiker’s paradise. Here are some of the most popular trails in the forest to check out:

One of the most popular short hikes in Prescott National Forest, the Lynx Lake Loop is a 2.5 mi (4 km) round-trip adventure to a stunning lake. The trail itself is fairly gentle and the woodlands around the lake provide plenty of shade, so it’s a nice hike for a hot summer’s day.

Most people hike this trail from the southern shore of the lake, however, note that many of the region’s trailheads have a day use fee. As you walk, you’ll also come across a boat rental area where you can rent kayaks for a few hours to enjoy some time on the water. But, keep in mind that swimming is not allowed in the lake.

The Thumb Butte Trail (#33) departs from downtown Prescott and heads quickly uphill to a ridge below a rocky prominence known as Thumb Butte. From the summing, you can get fantastic views of the surrounding region, including of the Bradshaw Mountains, Prescott, and even the San Francisco Peaks.

This trail begins at the Thumb Butte Picnic Area in Prescott. From there, it climbs 2.5 miles (4 km) to Thumb Butte, making it a great short day trip.

The Groom Creek Loop Trail (#307) is a popular choice for people who want a longer day trip with great views. This hike begins at the community of Groom Creek, which is located on South Senator Highway just outside of Prescott.

After departing the trailhead, this 9.3 mile (15 km) round-trip loop climbs steadily uphill through forested terrain. Eventually it peeks out above treeline at the summit of Spruce Mountain. At the summit, you can find a lookout tower, a picnic area, and even a vault toilet. So, don’t forget to pack a lunch to enjoy while at the top of the mountain.

On this 7.9 mi (12.7 km) trail, you’ll venture deep into the wilderness area, through chaparral and boulder fields before making it to a handful of viewpoints that showcase the beauty of the surrounding region.

Do note that visitors to this area are asked to stay on trails when hiking in the Granite Mountain Wilderness. This is particularly important during the peregrine falcon nesting season (February 1 to July 31). However, in the aftermath of the 2013 Doce Fire, the Forest Service has asked that hikers stay on trail at all times.

The North Mingus Loop Trail (#105) is a popular hiking trail in the Mingus Mountain Recreation Area. It is particularly fun to hike during the fall months because it showcases the gorgeous fall foliage of the region’s aspens.

This 4.1 mi (6.6 km) trail spends much of its time above 7,000 feet (2,134 m) in elevation as it contours around Mingus Mountain, so there are great views along the way. You can begin the hike form Mingus Mountain Campground and Picnic Site, too, making it a nice choice for a day hike during a long weekend in the mountains.

Accomodation in the National Forest

If you’re looking to stay in Prescott National Forest, you’ll have a number of different accommodation options available for your adventure. Here are some of the best places to stay within the forest during your next trip to the region:

There are 11 campgrounds in the national forest, including 4 camping areas that are open all year. Additionally, Prescott National Forest has a dedicated equestrian campground for horse packers (Groom Creek Horse Camp). There is also a dedicated OHV campground (Alto Pit OHV Campground) that is open to anyone.

Campgrounds in the forest include:

Most of the campgrounds in Prescott National Forest offer campsites on a first come, first served basis. In these situations, you must pay for your campsite upon arrival at the self-service fee station.

However, all group campsites in the forest must be reserved in advance. Additionally, some campgrounds take reservations, including Lynx Lake Campground, which is reservation-only. It’s particularly important to make reservations in advance if you want to camp in Prescott Basin or during holiday weekends.

Reservations can be made online at Recreation.gov by searching for your desired campground. Or, you can call 1-877-444-6777 to make a reservation over the phone.

As is the case in many national forests, visitors are allowed to dispersed camp outside of designated and developed areas in Prescott National Forest. Nevertheless, there are a few rules for dispersed camping in the forest that are important to know and follow.

Finally, keep in mind that all other rules and regulations regarding Leave No Trace are in effect in Prescott National Forest. This includes a requirement to pack out any trash and to properly dispose of human waste in catholes. Also pay attention to any local fire bans before having a campfire in the forest.

Prescott National Forest is a participant in Arizona’s Rooms with a View cabin rental program. This means that the forest contains a number of rustic cabins that you can rent for a short stay in the wilderness.

Each cabin offers something different for guests to enjoy. Some are a bit limited when it comes to amenities while others have more of a modern charm with running water and electricity. Many of the cabins in the state of Arizona are historic sites, too.

Within Prescott National Forest, there are three cabins available for rent:

Reservations are required to stay at these cabins. To make a reservation, go to Recreation.gov and search for the cabin that you’re interested in. Note that some cabins have corrals for horses while others are better suited for hikers. These cabins tend to be very popular in the summer, so be sure to make your reservation well in advance.

Looking for a place to stay during your trip to Prescott National Forest? Here are some of the best nearby cities and towns to check out:

Home to nearly 40,000 residents, Prescott is a city located in west-central Arizona, just outside of Prescott National Forest. The city was actually once the capital of the Arizona Territory in the 1800s. It is also located just outside the boundaries of the reservation of the Yavapai Prescott Indian Tribe.

These days, Prescott is known for being home to a number of historical buildings. It also features a bustling downtown area with plenty of small, independently-owned shops and restaurants. Prescott is also home to Prescott College, so its downtown area has a college town vibe.

The city of Flagstaff is the metropolitan center for the northern part of Arizona. It is home to approximately 75,000 residents and it is a popular basecamp for ventures into the rugged canyons of the northwestern part of the state.

Flagstaff is surrounded by many areas of public land, including Kaibab National Forest, Coconino National Forest, and Prescott National Forest. So, it’s a superb destination for anyone looking to hike, bike, cimb, or simply wander in the stunning landscapes of Arizona.

In addition to being a major metropolitan area, Phoenix is a superb place for outdoor recreation. Tonto National Forest is located just outside the city while there are also numerous parks in the city such as South Mountain Park. Furthermore, Phoenix is home to the Desert Botanical Garden, which is one of the few desert-specific botanical gardens in the world. 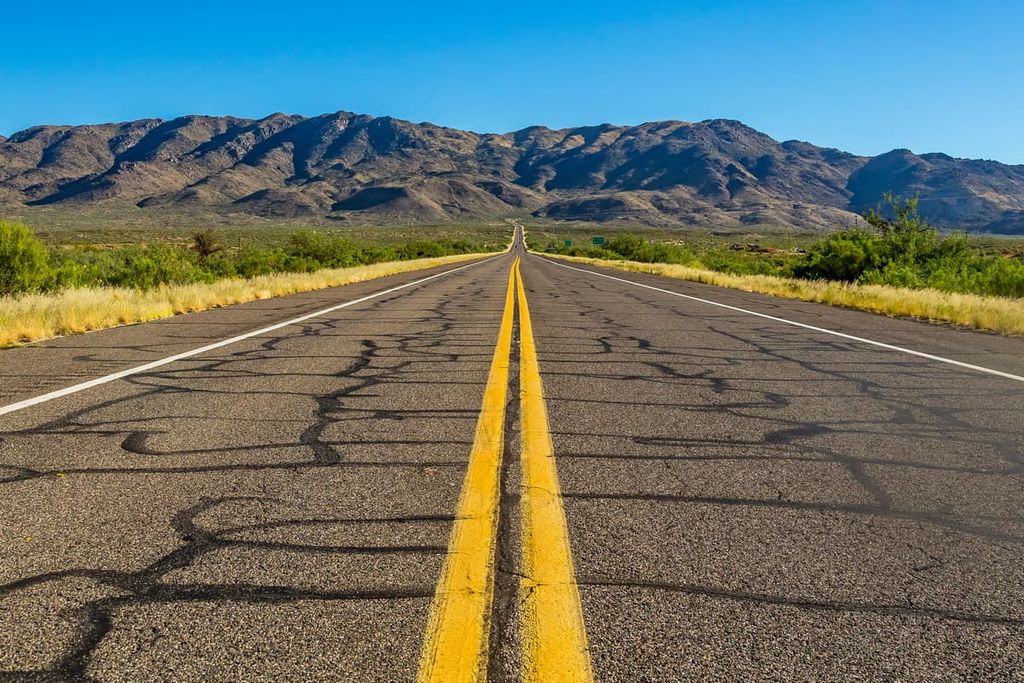 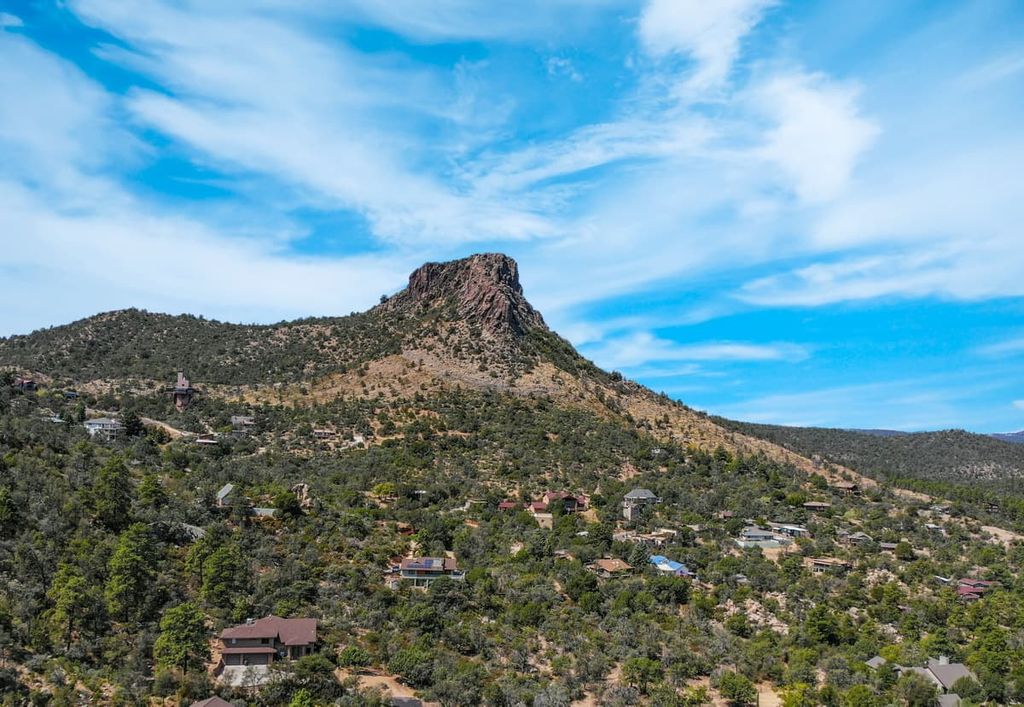 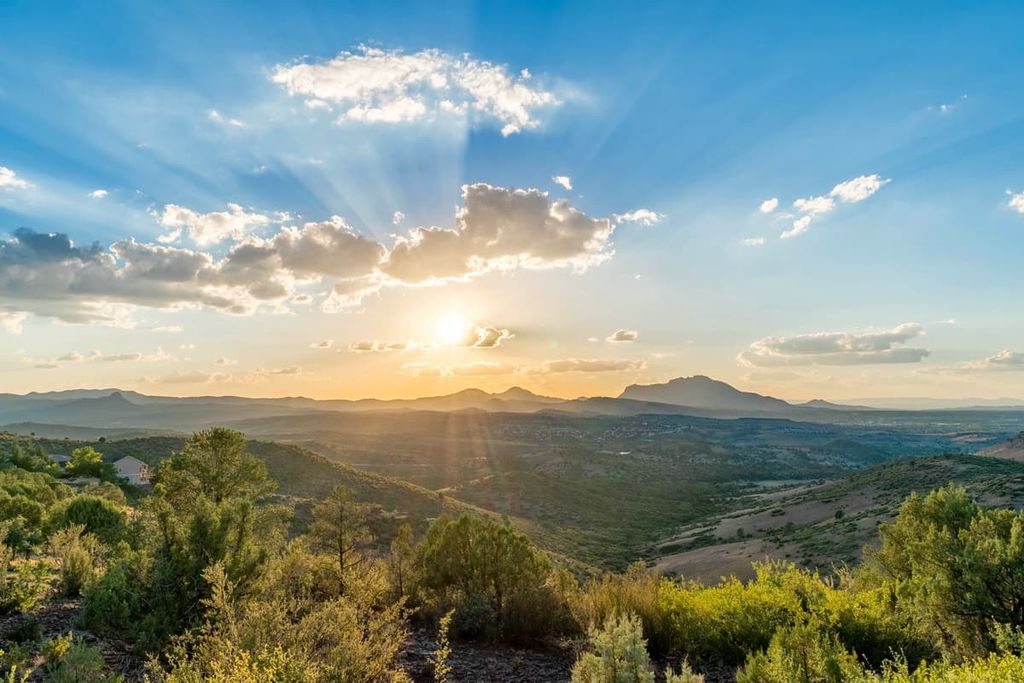 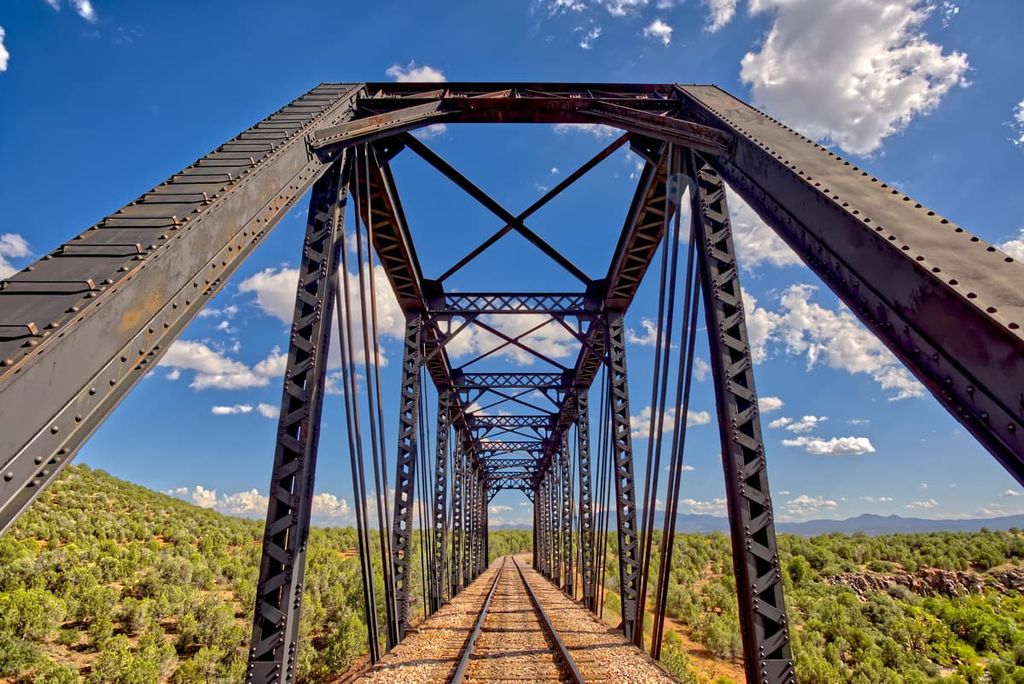 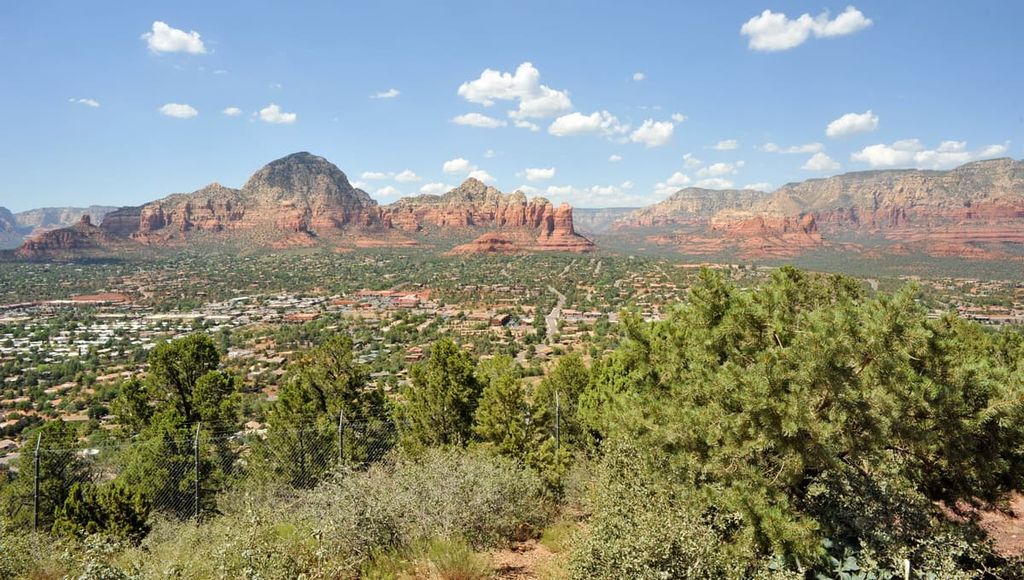 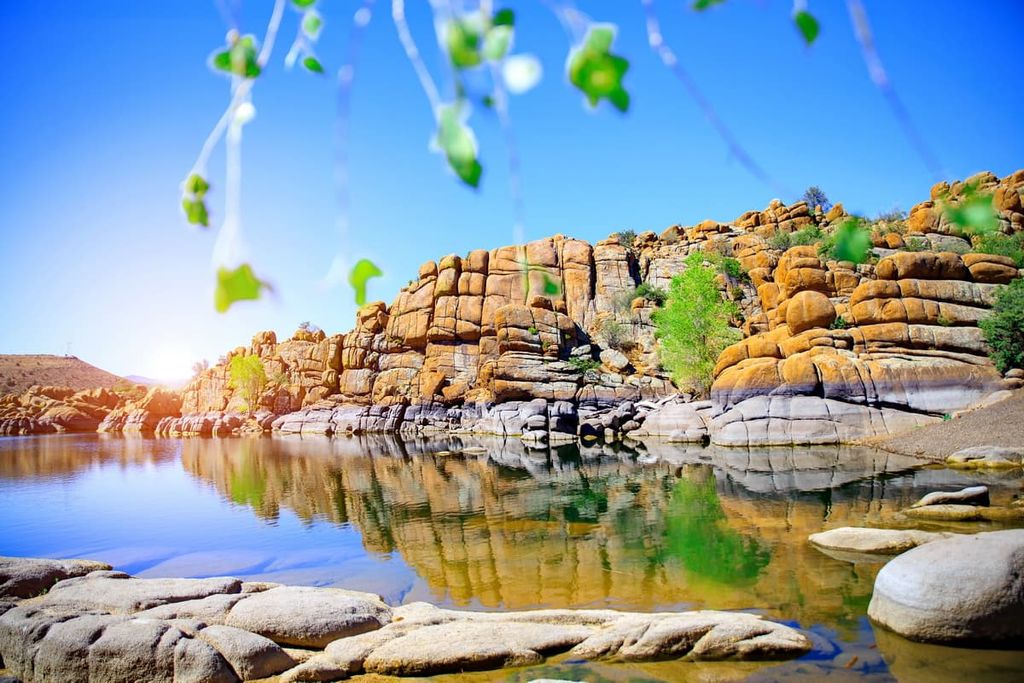 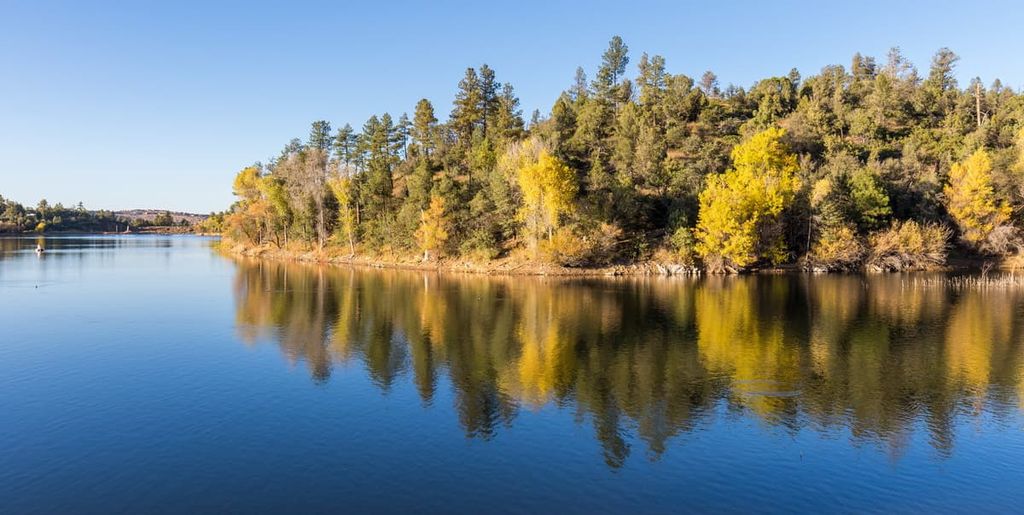