The Blue Ridge District is an administrative area of the Chattahoochee-Oconee National Forest that’s located in the northern part of the US state of Georgia. The district features rolling and rugged forested hills. There are 329 named mountains, the highest and most prominent of which is Brasstown Bald (4,783 ft/1,458 m). 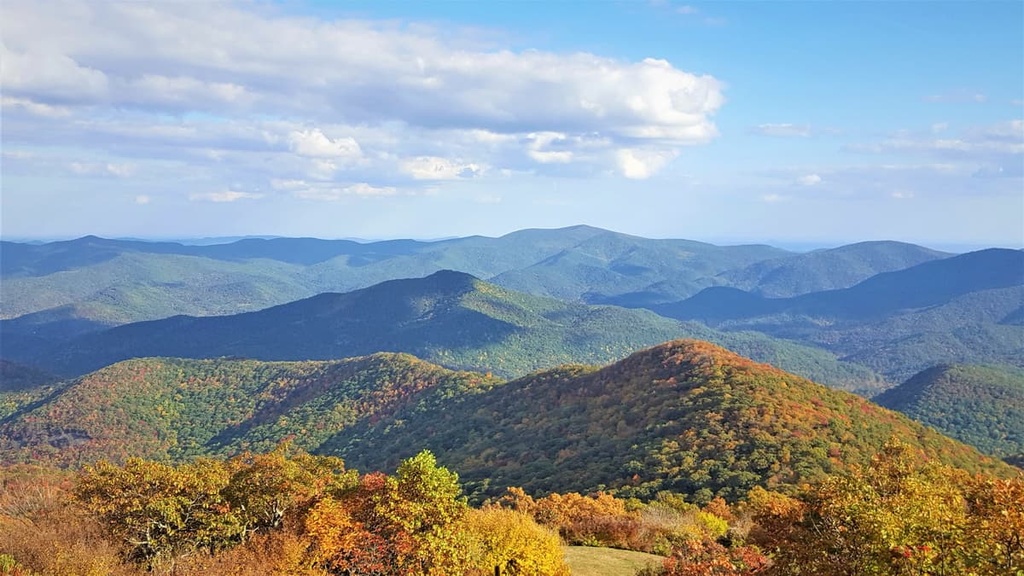 As a whole, the forest spans 1,354 sq. miles (3,506 sq. km) of land across the northern part of the state. The Blue Ridge District encompasses the North Georgia Mountains within Dawson, Fannin, Gilmer, Lumpkin, Towns, and Union counties.

The rugged landscape in the ranger district is marked by rolling hillsides that are covered in dense sections of forest, as well as valleys, gorges, and a plethora of rivers and streams. The Chattahoochee River has headwaters near the district, as it begins in the North Georgia Mountains

Geologically, the peaks in the Chattahoochee-Oconee National Forest are the southern edge of the Blue Ridge Mountains. The peaks within the district are part of the larger Appalachian Mountains, which travel northeast across the eastern United States and into Canada.

Other major rivers that run through the region include the Nottely River, Toccoa River, and the Hiwassee River.

The mountains within the Blue Ridge District are part of the Blue Ridge Mountains system, which is how the ranger district got its name. These mountains are a subrange of the Appalachian Mountains, which begin in Georgia and extend northward to the province of Newfoundland and Labrador in Canada.

The district and surrounding landscape are part of the larger Blue Ridge Mountains physiographic province. The area is home to unique features and landforms and it is surrounded by relatively flat landscapes to the west and east. Both igneous and metamorphic rocks can be found in the region.

The rocks found within the Blue Ridge District dates back to the Precambrian and Paleozoic eras. The range began forming around 1 billion years ago and was thrust upwards throughout the Grenville and Alleghenian orogenies.

The Blue Ridge Mountains system is hundreds of millions of years older than many major mountain ranges throughout the world. For example, notable ranges such as the Alps or Himalaya, formed during the much more recent Alpine orogeny, which took place around 65 million years ago.

While the mountains within the district began forming around 1 billion years ago, they didn’t take their current shape until around 100 million years ago. Millions of years of erosion further carved out the landscape, leaving behind the rolling hills, valleys, and various waterways that we see in the region to this day.

Higher elevations within the district are home to spruce and fir forest, and many of the tallest peaks in the region are densely covered. A majority of the forests found in the middle elevations of the district consist of northern mixed pine-hardwoods. Lower elevation areas of the region, particularly near rivers, are home to populations of chestnut, oak, hickory, shortleaf pine, and heath trees.

Larger mammals found within the forest include black bears, coyotes, foxes, deer and bobcats. The various waterways in the ranger district are home to river otters and beavers along with numerous species of fish. Common birds include species of ducks, eagles, owls, sparrows, and hawks.

The land throughout the Chattahoochee-Oconee National Forest and Nantahala National Forest, marks the ancestral homelands of the Indigenous Cherokee people. Human presence in the region dates back 8,000 years and numerous artifacts from the people of the Paleo-Indian culture have been found in the area.

Although specific territorial borders are difficult to define, the ancestral homelands of the Cherokee extend throughout what is now northern Georgia and into parts of North Carolina and Tennessee. The mild weather and various waterways in the region allowed Indigenous communities to thrive for thousands of years.

In 1540, the Spaniard Hernando de Soto set off on an expedition throughout what is now the southeastern US and he made it at least as far as present day Tennessee. This expedition was the first recorded contact between Indigenous peoples and Europeans in this part of the world.

Over the succeeding centuries, many Cherokee Tribes developed trade deals with the English, Irish, and Scottish immigrants who began inhabiting the region.

Throughout this process, the government killed many Indigenous people and forced them to move onto small reservations. After the controversial signing of the Treaty of New Echota, the US government forced most of the Cherokee to march westward to what is now Oklahoma.

This mass removal of Indigneous people would later be known as the Trail of Tears. The trail was walked by an estimated 16,000 Cherokee people, and approximately a quarter of them died along the journey.

Many Cherokee people who marched to Oklahoma later formed the Cherokee Nation. Meanwhile, the relatively few Cherokee who managed to remain in their homelands formed the Eastern Band of Cherokee Indians, which is headquartered on the Qualla Boundary in what is now North Carolina.

In 1911, the United States Forest Service purchased land in northern Georgia, and these lands later became part of the Chattahoochee National Forest. Further land acquisition allowed the national forest to grow in size throughout the following decades. In 1936, the forest was split into two ranger districts: Blue Ridge and Tallaulah.

The forest would later be combined with the Oconee National Forest in central Georgia. As a whole, the forest contains over 2,200 miles (3,500 km) of streams and rivers and over 450 miles (720 km) of hiking trails.

The Blue Ridge District of the Chattahoochee-Oconee National Forest is home to numerous excellent destinations for outdoor recreation. Here are a few trails located within the district that are worth checking out on your next visit.

The Rich Mountain Wilderness lies in the western region of the Blue Ridge District and is surrounded by hiking trails in the forest.

The second-growth hardwood forest in the wilderness provides the ideal habitat for a diverse range of fauna to thrive. Nearby trails include Long Branch Loop Trail, Flat Creek Loop, Fall Branch Falls Trail, and Green Mountain.

The central region of the district is home to numerous hiking trails and wilderness areas such as the Blood Mountain Wilderness and the Raven Cliffs Wilderness. Many of the trails in the central part of the ranger district follow along the rivers and streams of the region or traverse up the various mountains.

Here are some of the popular trails in the region:

The eastern region of the Blue Ridge District is home to the Mark Trail Wilderness, Brasstown Wilderness, and Tray Mountain Wilderness. The Appalachian Trail passes through this region before traveling northeast across Georgia’s border with North Carolina. Here are some popular trails in the area that are worth checking out.

Looking for a place to stay near the Blue Ridge District? Here are some of the best cities and villages to check out in the region:

Dahlonega is a small city located just south of the Blue Ridge District. The city has a population of around 7,000 people, and it was the site of one of the first major gold rushes in the United States. Dahlonega sits in the foothills of the Blue Ridge Mountains, offering ample opportunities for outdoor recreation.

The city of Atlanta lies just an hour's drive to the south of Dahlonega and the Blue Ridge District. With a population of around 500,000 people, Atlanta is both the capital and largest city in the state of Georgia. The city serves as a cultural and commercial hub for the entire region. 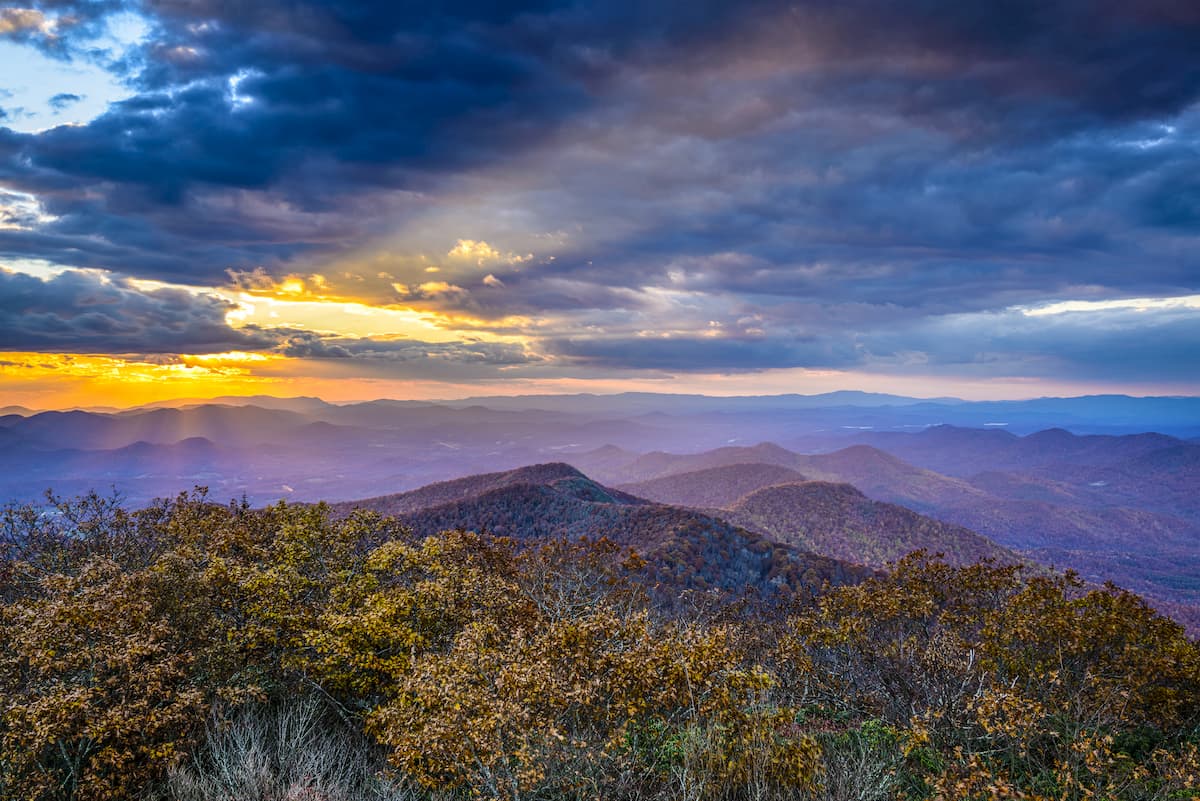 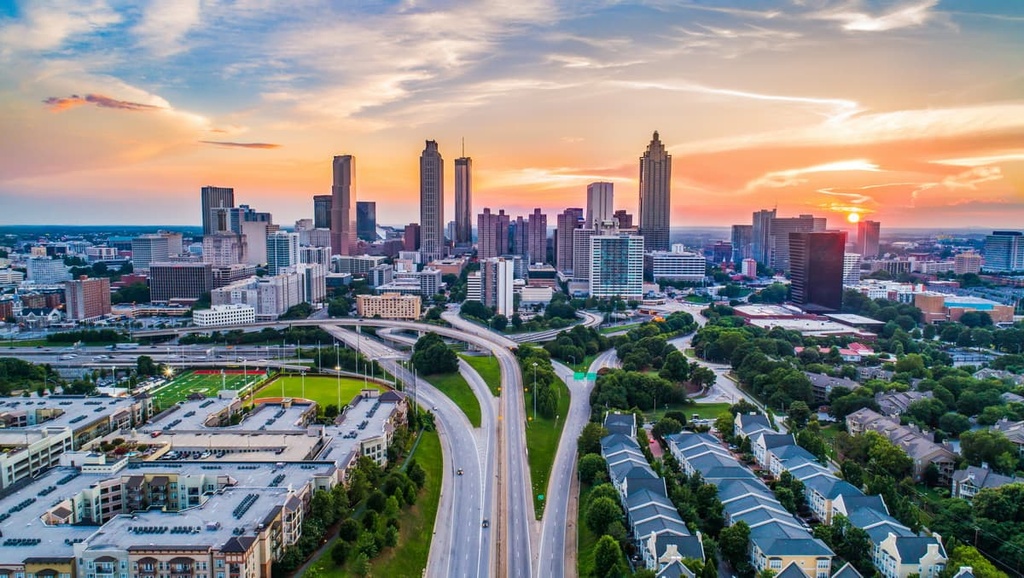 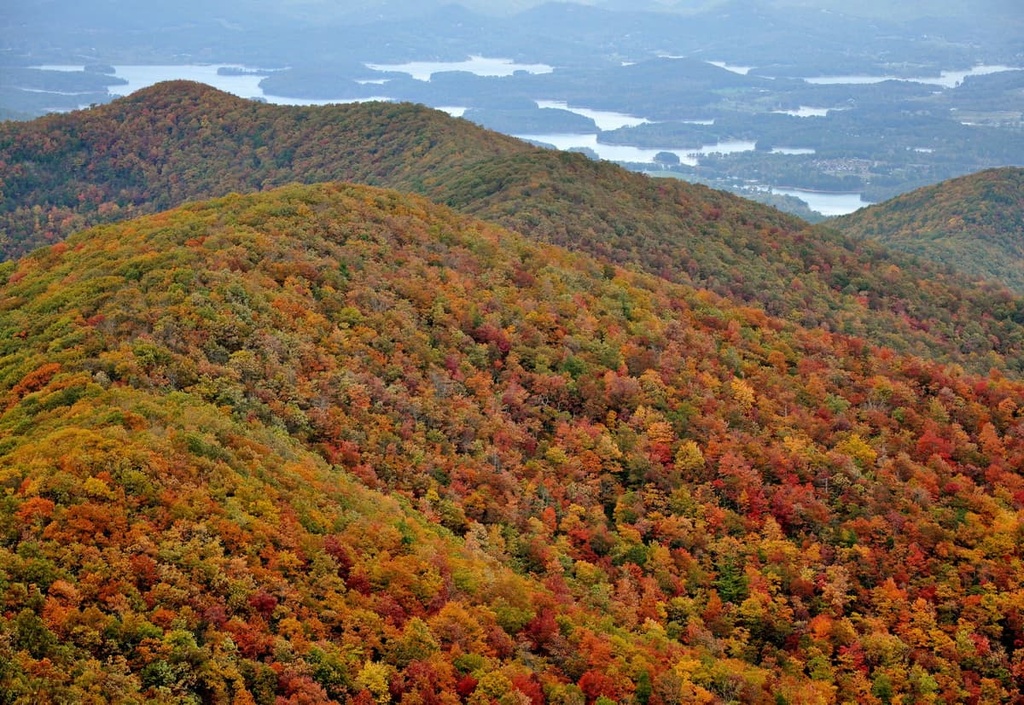 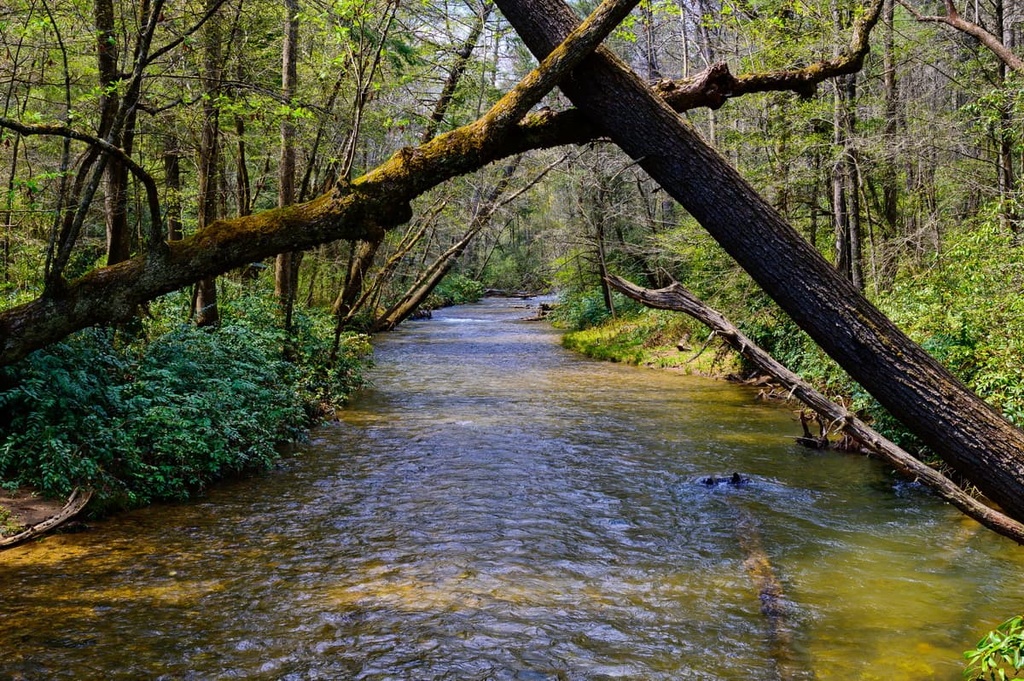 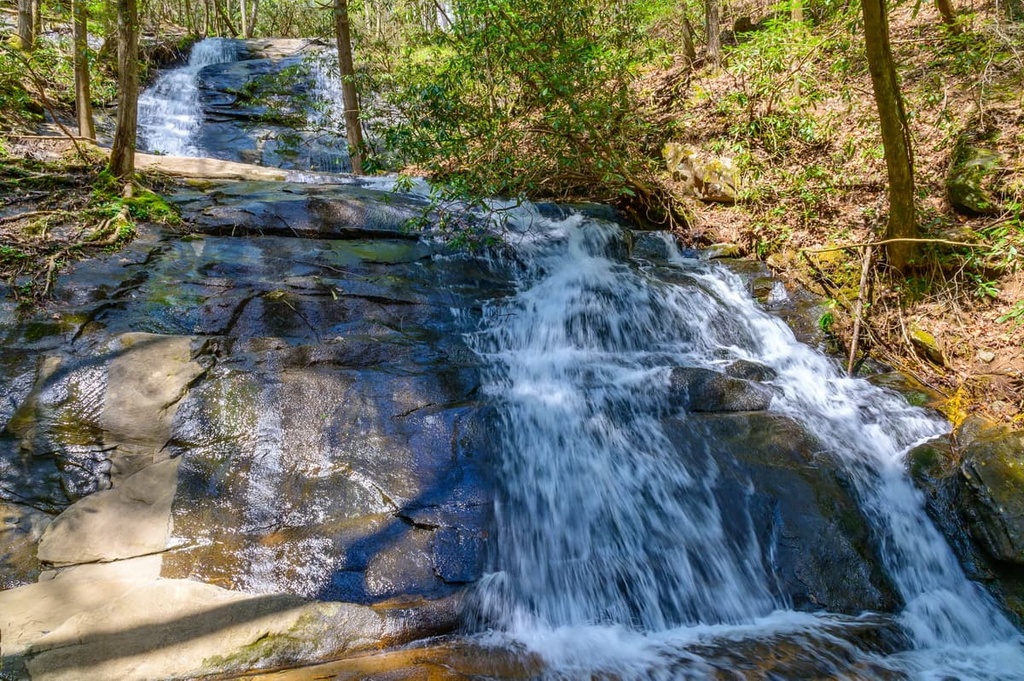 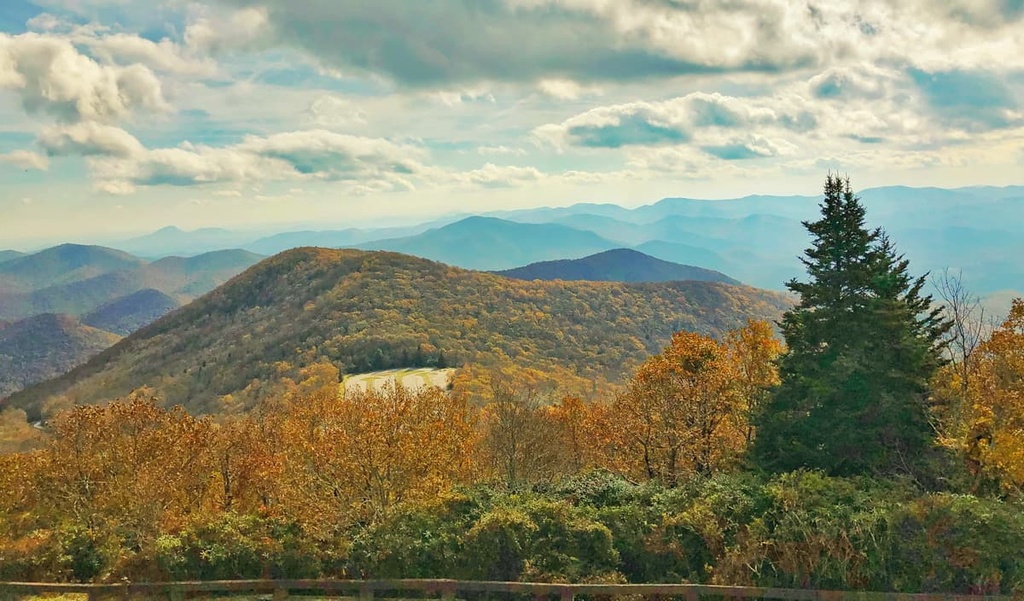 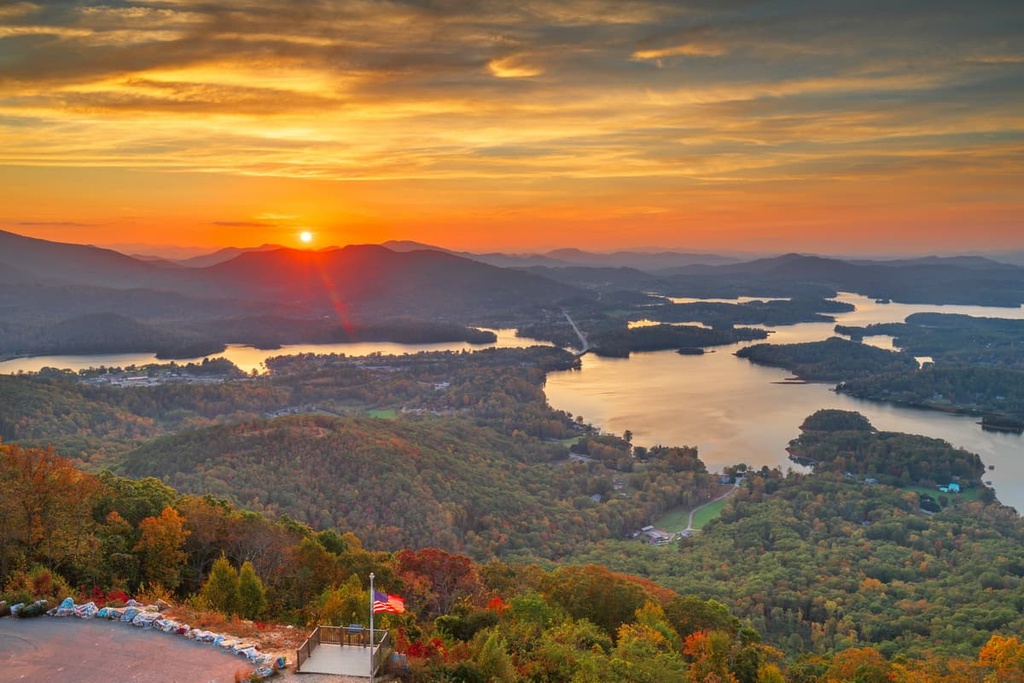