The Nantahala Ranger District of the Nantahala National Forest is an outdoor recreation destination located within the US state of North Carolina. The district features a varied and rugged landscape with 335 named mountains. The tallest peak in the ranger district is Rough Butt Bald at 5,948 ft (1,813 m) in elevation and the most prominent is Standing Indian with 2,835 ft (864 m) of prominence.

The Nantahala Ranger District of the Nantahala National Forest lies within the western portion of the US state of North Carolina. The lush and diverse landscape in the ranger district is one of the wettest regions in the continental US after the Pacific Northwest.

The region is home to a diverse landscape featuring mountains, forested hillsides, rivers, narrow valleys and gorges. The Nantahala River runs through the Nantahala Gorge, which is found within the district.

The Blue Ridge Mountains run throughout all districts of the national forest. This range features continuous rolling hills and is a subrange of the greater Appalachian Mountains. Whitewater Falls lies within the district and, at 411 ft tall (125 m), it is one of the highest waterfalls located to the east of the Rocky Mountains.

Another prominent feature is the Wayah Bald, a high-elevation region that’s free of trees and that features an observation tower. Numerous long distance trails cut through the landscape, including the Appalachian, Foothills, Bartram, and Mountains-to-Sea trails.

The Roy Taylor Forest covers 62.5 sq. miles (162 sq. km) within the district. Within this portion of forest also lies the Tuckasegee Gorge. Old growth forest can be found throughout the all districts of the forest with a significant patch lying outside of the district within the Joyce Kilmer-Slickrock Wilderness.

Furthermore, the Blue Ridge Mountains are part of a larger geologic province, which means that they feature unique and distinct landforms. The range also consists primarily of both igneous and metamorphic rocks.

These mountains are much older than other ranges such as the Alps or Himalaya, which were formed during the Alpine orogeny around 65 million years ago. The mountains that are visible today are the result of the range being heavily eroded over the course of hundreds of millions of years.

The landscape within the Nantahala Ranger District and the surrounding areas are rich in minerals such as sapphires, rubies, emeralds, mica, and amethysts.

The Nantahala District is part of the larger Blue Ridge ecoregion. Thus, the flora and fauna found in this portion of the forest is similar to that of much of the surrounding region.

Mid-elevations in the forest are primarily home to northern hardwoods while lower elevations consist of populations of hickory, chestnut, oak, shortleaf pine, and heath trees. Some of the tallest peaks in the region feature forests that consist primarily of spruce and fir trees.

The rugged terrain in the ranger district allows for various animals to inhabit the region. Larger mammals common throughout the forest include black bears, coyotes, bobcats, white-tailed deer, and porcupines. The various rivers within the district are also home to groups of beavers and river otters.

The land throughout the Nantahala National Forest is part of the ancestral homelands of the Cherokee people. Traces of human settlements throughout the southern United States date as far back as 8,000 years ago when people of the Paleo-Indian culture lived throughout the region.

North Carolina is part of the traditional territory of the Cherokee Nation and the Eastern Band of Cherokee Indians, as are parts of what are now the states of Tennessee and Georgia. The Cherokee people were traditionally hunter gatherers and utilized the many waterways found throughout what is now the national forest.

The first recorded contact between the Indigenous peoples who lived in the region and Europeans occurred in 1540 during the expedition of Spaniard Hernando de Soto in what is now Tennessee. Throughout the following decades, the Cheroke people signed various treaties and trade deals with the US regarding land claims by the Irish, English, and Scottish immigrants in the area.

The Cherokee people continued to live throughout the region during the 1700s when they formed an organized national government. The discovery of gold in nearby Georgia during the early 1800s led to a drastic increase in migration to the region.

The US government routinely began forcibly removing Indigneous peoples in the region from their homelands, forcing them onto reservations and killing many of them. In the 1830s, the US government continually tried to force the Cherokee Nation to sign over their land via the Treaty of New Echota.

Though the Cherokee Nation never signed the document, the treaty still led to the forced removal of the Cherokee people from their ancestral homeland and into Arkansas and Oklahoma. In what would later be known as the Trail of Tears, this journey was made by around 16,000 Cherokee people, and it is estimated that around 4,000 people died during the journey.

The Forest Reserve Act was passed by the US Congress in 1891, which gave the President of the United States the authority to set aside forest reserves. Not long afterward, in 1905, the US Forest Service was established to help manage these new reserves.

In 1920, then-President Woodrow Wilson purchased land to form the Nantahala National Forest under the authority he had through the 1911 Weeks Act. Over the following decades, the forest was remapped and divided to create its current districts.

The Nantahala District is home to numerous protected regions for outdoor recreation. Here are a few of the parks and forest located within the forest district:

The Southern Nantahala Wilderness covers 17 sq. miles (44 sq. km) of land in parts of the Nantahala and Tusquitee districts. Part of the wilderness also lies within the Chattahoochee National Forest in Georgia. The Appalachian Trail runs through the wilderness along with various other routes.

Here are some of the most popular routes in the wilderness:

Various other trails lie throughout the Nantahala district, offering stunning views of the hillsides, waterfalls, streams, and forested landscape of the region. Some other hikes to check out in the area include:

Looking for a place to stay near the Nantahala Ranger District? Here are some of the best cities and villages to check out in the region:

The small town of Franklin is situated within the heart of the Nantahala Ranger District. Though it has a population of around 4,000 residents, it has become a popular destination for hikers to explore the surrounding landscape.

Since the region is rich in minerals and gems, the town is occasionally referred to by locals as the “Gem Capital of the World.” The Appalachian Trail passes by the town some 10 miles (16 km) to the west and can easily be reached for hiking. Each year, the town hosts the Macon County Gemboree, which is a jewelry and gem show. The Franklin Gem and Mineral Museum is also located within the town and is free to the public.

The city of Asheville lies just an hour's drive to the northeast of the ranger district. Asheville is situated at the confluence of the French Board and Swannanoa rivers and has a population of around 91,000 people, making it the most populous city in western North Carolina.

Located in the heart of the Blue Ridge Mountains, Asheville is a hub for outdoor activities. It also has a thriving local restaurant scene, and it has more breweries per capita than nearly any other city in the country. Other sites within the city that are worth checking out include the Biltmore Estate and the River Arts District.

The nearby mountains around Asheville have also become a hub for trail running, hiking, and mountain biking in recent years. The rivers of the region even provide locals and visitors alike with opportunities for paddleboarding and world class whitewater rafting. 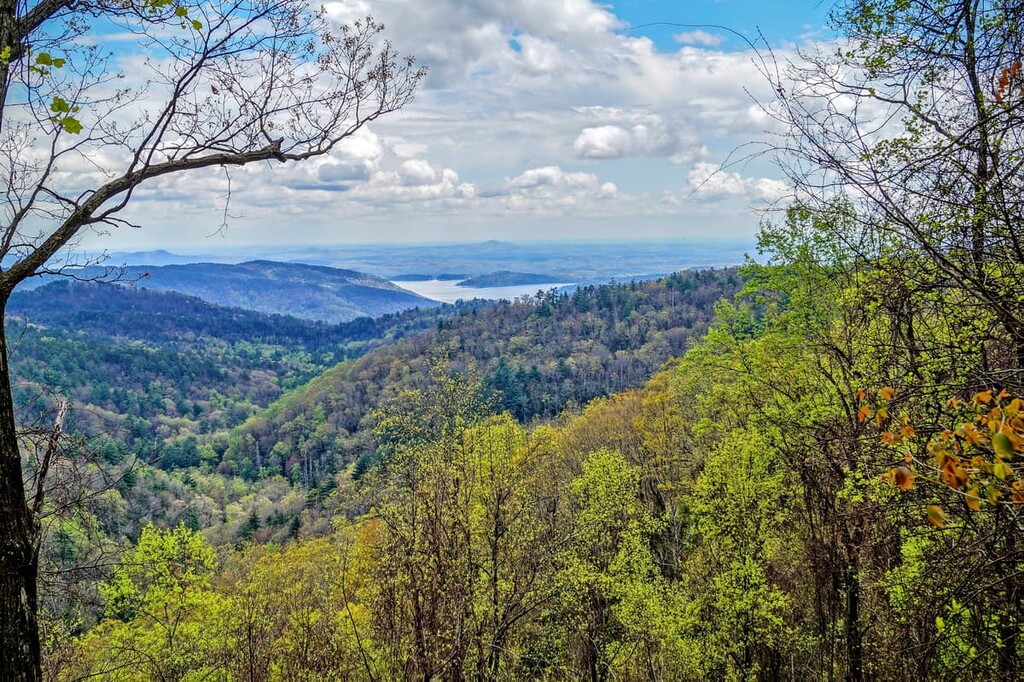 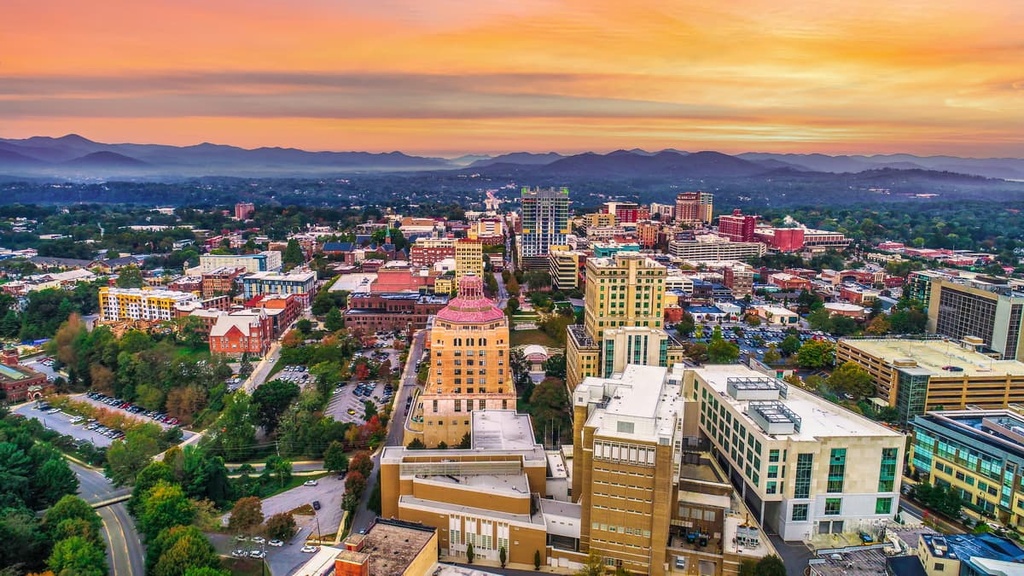 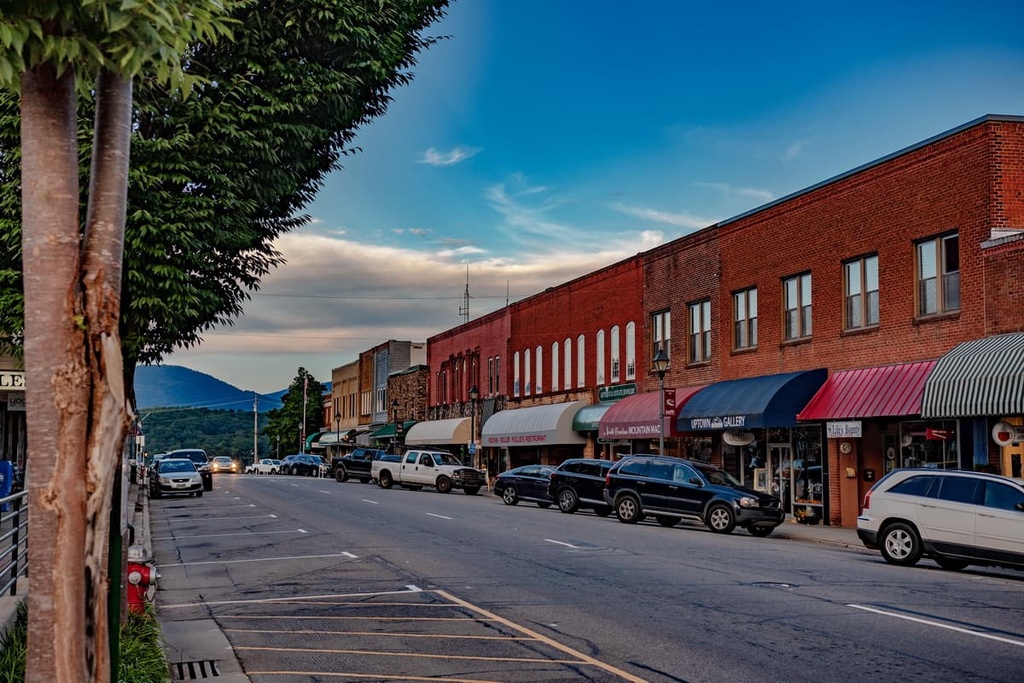 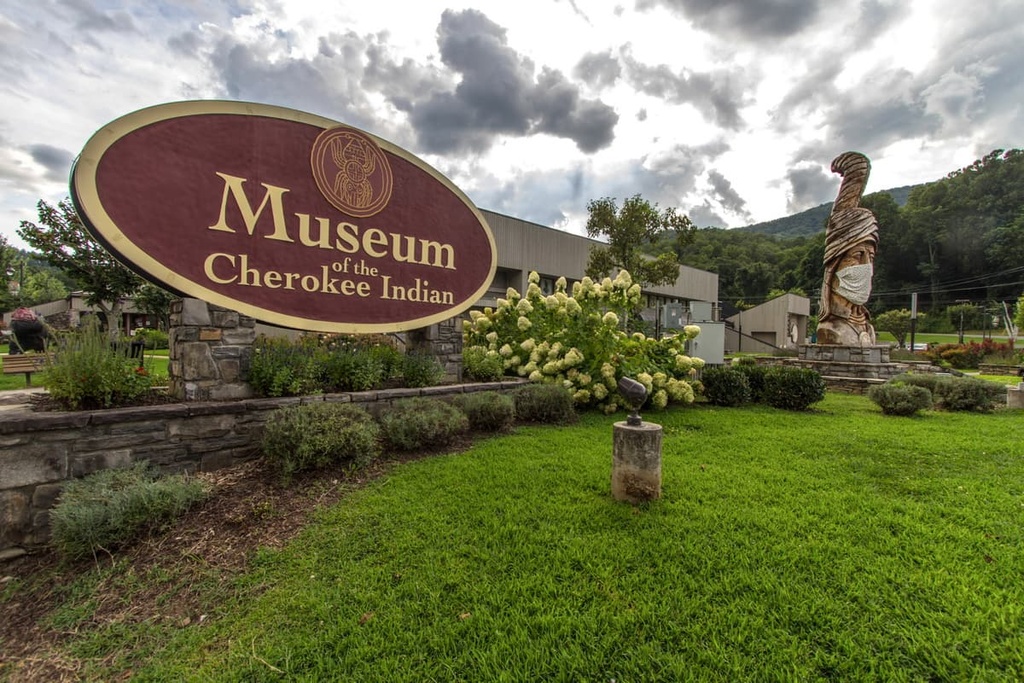 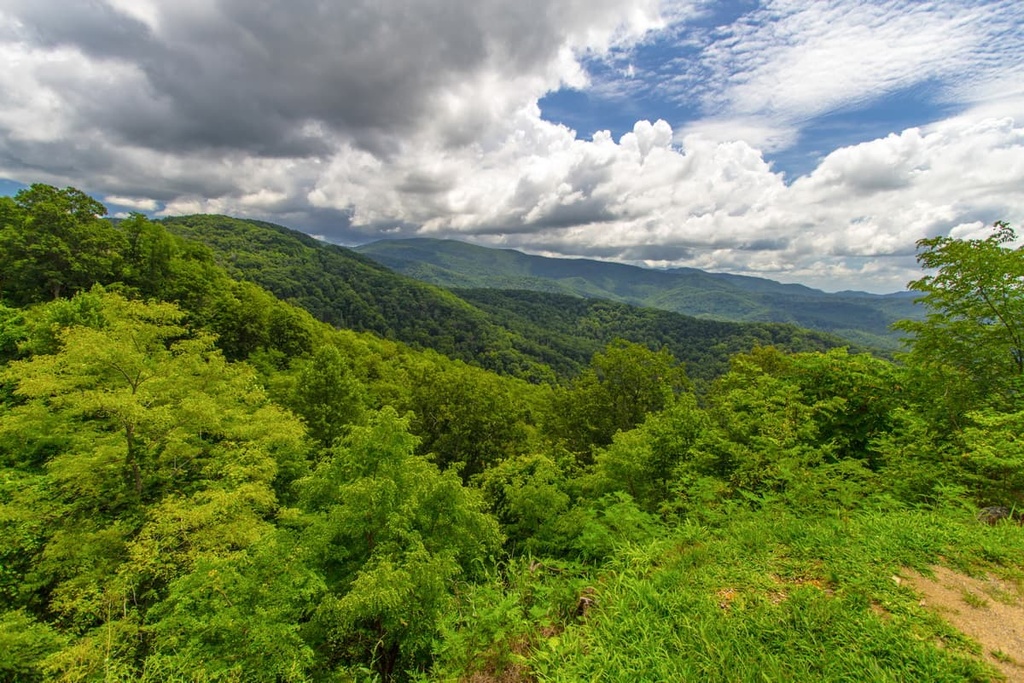 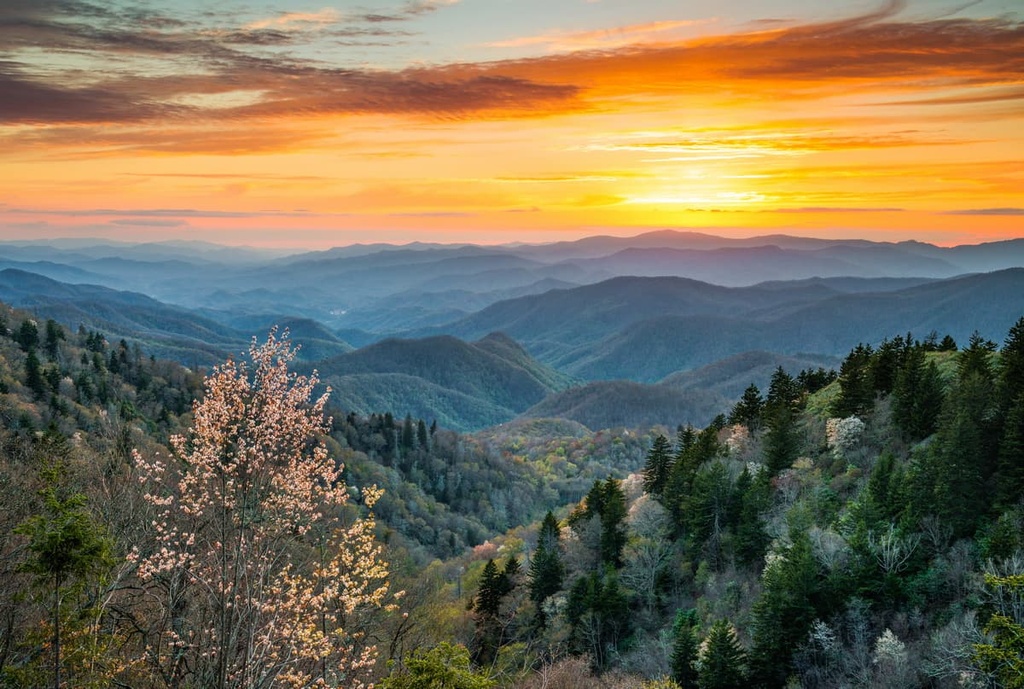 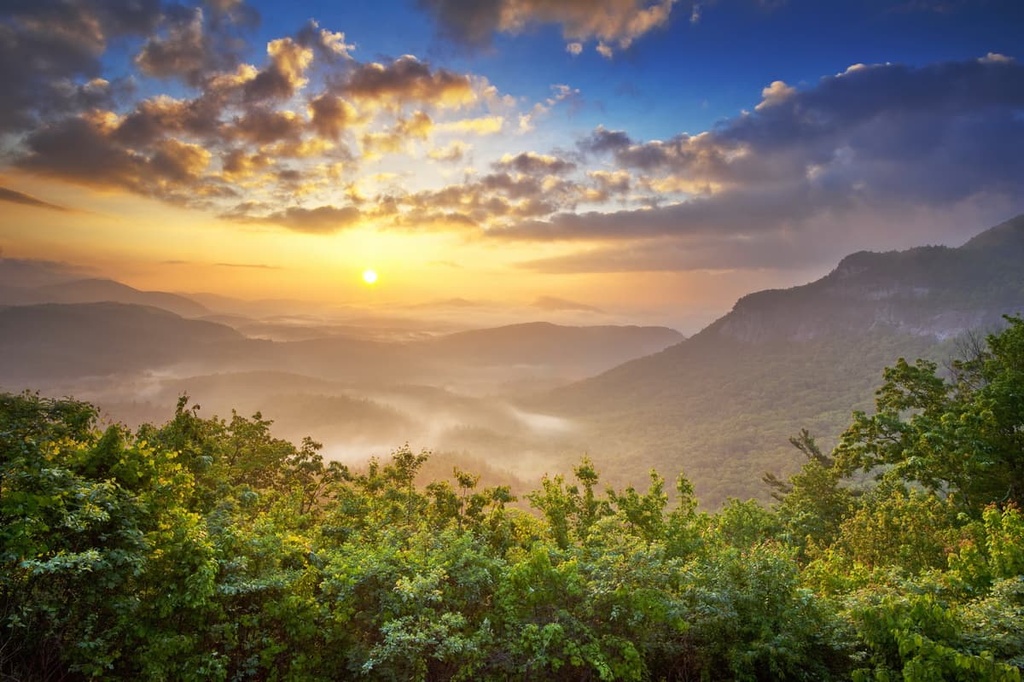