Best known for its large herd of wild horses, the Cedar Mountains are a beautiful, rugged collection of peaks located in the northwestern part of the US state of Utah. The range contains 20 named mountains, the highest and most prominent of which is Cedar Benchmark (7,697ft/2,346m). 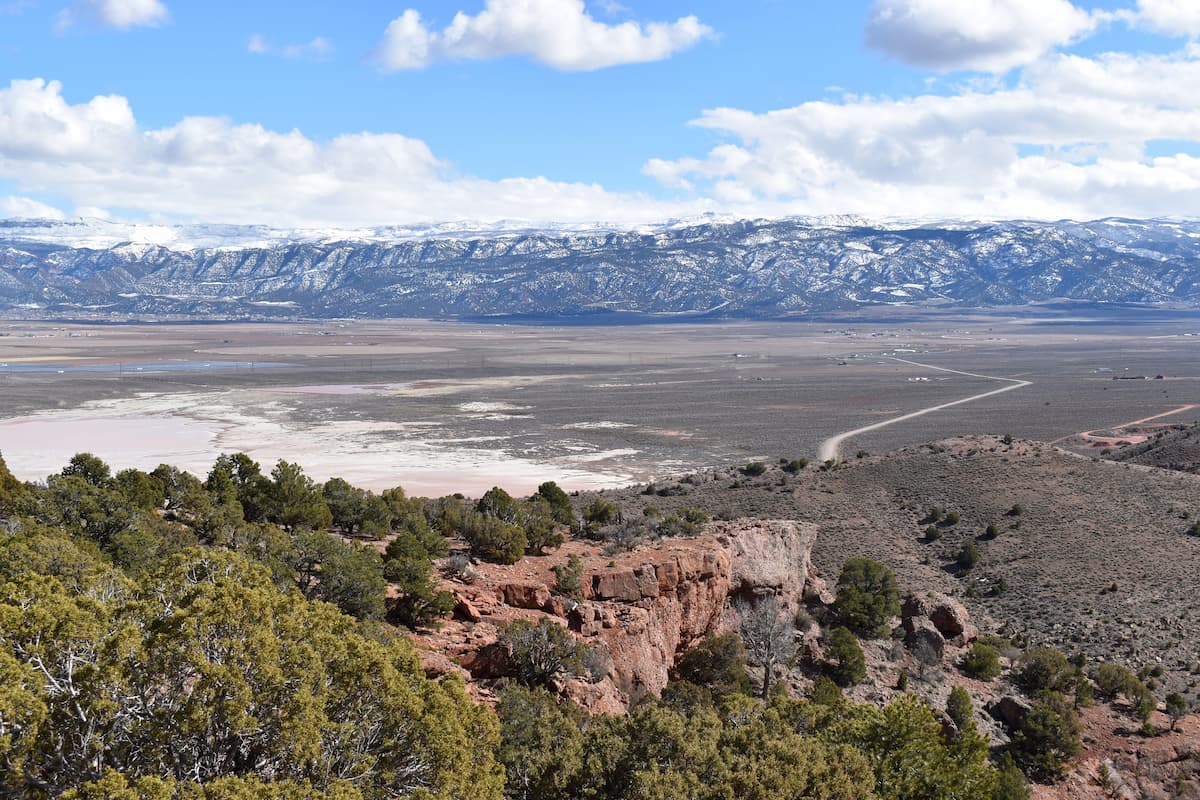 Located just south of the Great Salt Lake, the Cedar Mountains are a small collection of peaks in northwestern Utah. The range is approximately 45 miles (72km) long and it is entirely contained within Tooele County.

The Cedar Mountains are the westernmost of a series of 3 prominent mountain ranges that run from north to south between the Great Salt Lake Desert to the west and the Wasatch Range to the east. Indeed, these 3 ranges are part of the Great Basin Ranges, which makes them geologically distinct from the neighboring Wasatch Range and Uinta Mountains, which are located to the east of nearby Salt Lake City and are part of the Western Rocky Mountains.

From a geological perspective, the Cedar Mountains are part of the Great Basin Ranges, which is a large physiographic province that covers most of Nevada, as well as western Utah, western California, and the southern parts of Idaho and Oregon.

As the name suggests, the Great Basin Ranges are characterized by a series of alternating mountain ranges and basins, which can be clearly seen in topography of the alternating Cedar Mountains, Stansbury Mountains, and Oquirrh Mountains in northwestern Utah.

The exposed bedrock in the Cedar Mountains is predominately sedimentary, which is typical of the Great Basin Ranges. These rock layers date as far back as the Late Mississippian in the Paleozoic and are mostly sandstones, limestones and quartzites.

Junipers and other similarly hardy trees are found in the mid-elevations of the range, though the aridity of the landscape both within the Cedar Mountains and in the Great Salt Lake Desert to the west makes it hard for vegetation to flourish in the region.

Where are the cedar trees, you might ask? Well, not in the Cedar Mountains, we’re afraid.

Although the Cedar Mountains might be named after the mighty cedar tree, the name is actually the result of mistaken identity. Indeed, some of the earliest settlers of European descent in the region thought the juniper trees were cedars, which is why the range is called the Cedar Mountains.

That being said, there are quite a few different animal species that call the Cedar Mountains home. Within the range, there are plenty of jackrabbits, badgers, bobcats, pocket gophers, and other similar small mammals. There are also some small herds of pronghorns and mule deer that traverse the range, as well as some solitary mountain lions, though encounters with mountain lions are (thankfully) difficult to come by.

Perhaps the most iconic wildlife in the Cedar Mountains, however, is the region’s herd of wild horses. Although they’re certainly not native to the area (they were introduced in the 19th century), there are a few hundred individuals within the Cedar Mountain Herd Management Area.

Like all wildlife, wild horses should be treated with respect and visitors to the range should keep their distance whenever the herd is in sight. Generally speaking, encounters with the herd are memorable experiences, though be sure to give the horses as much space as you would with any other large mammal.

The Cedar Mountains have a long and storied history of human inhabitation which dates back thousands of years. Although much of the region is now considered a wilderness, it is part of the traditional territory and ancestral homelands of many peoples, most notably the Goshute, some of whom live on the Skull Valley Reservation just to the east of the range.

Some of the earliest people of European descent to visit the region to the south of the Great Salt Lake were likely Jim Bridger and Etienne Provost from the United States and Canada, respectively, who ventured through the area in the 1820s. Peter Skene Ogden was also one of the best-known fur trappers to have travelled through the area during the same time period while he was working with the Hudson’s Bay Company.

However, the first documented visit to the Cedar Mountains area by a person of European descent was likely John C. Frémont, who traveled through western Utah during his many expeditions in the 1840s.

Not long after, Lansford Hastings established what he termed the ‘Hastings Cutoff’ on the California Trail, which ventured from Wyoming to the south of the Great Salt Lake and then into Nevada instead of heading north of the lake into Idaho. The cutoff traveled partially through the Cedar Mountains and was later implicated in the now infamous disaster that struck the Donner Party in 1846 by delaying them along their route.

Although the Donner Party’s early attempt to use the Hastings Cutoff was anything but successful, the route was used quite heavily during the California Gold Rush until it was replaced by the Salt Lake Cutoff, which traversed easier terrain.

During the late 1840s, Brigham Young of the Church of Jesus Christ of Latter-day Saints (LDS Church) led a sizable group of Mormon settlers into the area to the east of the Cedar Mountains in the Salt Lake Valley. Although this region and the rest of the Wasatch Front is now the most densely populated part of Utah, relatively few people live in the region around the Cedar Mountains and western Tooele County, even though it’s just 1 hour by road from Salt Lake City.

But, as was mentioned previously, the Cedar Mountains are relatively mineral-poor, so they’ve mostly avoided widespread mining operations over the past 2 centuries.

After years of lobbying, much of the Cedar Mountains was included in part of the new Cedar Mountain Wilderness Area that was created in 2006. The wilderness was the first to be created in the state in some 20 years.

It was partially created out of a push by Congress to block the construction of a railroad that would allow access to a potential nuclear waste storage area near the Skull Valley Reservation. The creation of the wilderness area ultimately led to the end of the proposed nuclear project in 2012.

These days, the Cedar Mountains are not as heavily visited as the nearby Wasatch Range, though they are seeing the effects of high visitation rates. Since the wilderness was created fairly recently, the range is crisscrossed by quite a few roads, many of which are in need of repair to prevent future land degradation.

However, the range remains a popular outdoor recreation destination among hikers, campers, and hunters, so it’s certainly worth a visit if you’re in the area.

Although there are quite a few dirt roads that traverse the Cedar Mountains, there are relatively few established trails. Indeed, the range is fairly undeveloped, so much of the hiking in the region is off-trail or along old dirt roads.

That being said, perhaps the most popular hike in the Cedar Mountains is to the summit of the range’s highpoint: Cedar Benchmark.

Getting to Cedar Benchmark requires quite a bit of driving on a well-graded dirt road after departing from I-80 on Exit 56 near the ghost town of Aragonite. After passing the small BLM information board for the wilderness area, visitors can continue driving about 14 miles (22.5km) up a jeep road to the western flank of the mountain.

Of course, visitors can get out of the car at any point and start hiking, though the road can generally get you to within 2 miles (3.2km) of the summit if you have a vehicle with high enough clearance. The route is mellow and relatively straightforward, but due to the lack of maintained trails, a decent understanding of off-trail travel is a must.

Planning a trip to the Cedar Mountains? Here are some of the best places to stay while you’re in the area:

The second largest city in Tooele County, Grantsville is a community of about 9,000 residents that’s located to the northeast of the Cedar Mountains.

It is home to the Utah Motorsports Campus, the popular Deseret Peak Recreational Center, and the Donner-Reed Museum, which is certainly worth a visit. Grantsville is just a 40 minute drive from Salt Lake City, so it’s a great place to stay during your adventures.

The town of Dugway is located just to the southwest of the Cedar Mountains. It is home to about 2,000 residents and it is actually located within a massive US Army testing facility known as the Dugway Proving Ground.

Technically speaking, the city is a ‘closed city’ and it’s generally not open to non-resident civilians. Instead, it is a housing area for military personnel and civilian contractors that are working at the base.

As a result, civilian visitors are not allowed without special permission. However, the city is often included on roadmaps and it’s worth mentioning here so that you don’t accidentally try to drive down to the town for a bite to eat or a place to stay during your adventures.

Salt Lake City is the capital and largest city in the state of Utah with over 200,000 residents. The city is located to the northeast of the Cedar Mountains, about an hour away by car.

Due to its proximity to the Wasatch Range, Salt Lake City is a major destination for outdoor recreation. It is also home to a major international airport, so it’s the perfect place to fly into if you’re traveling from far away. 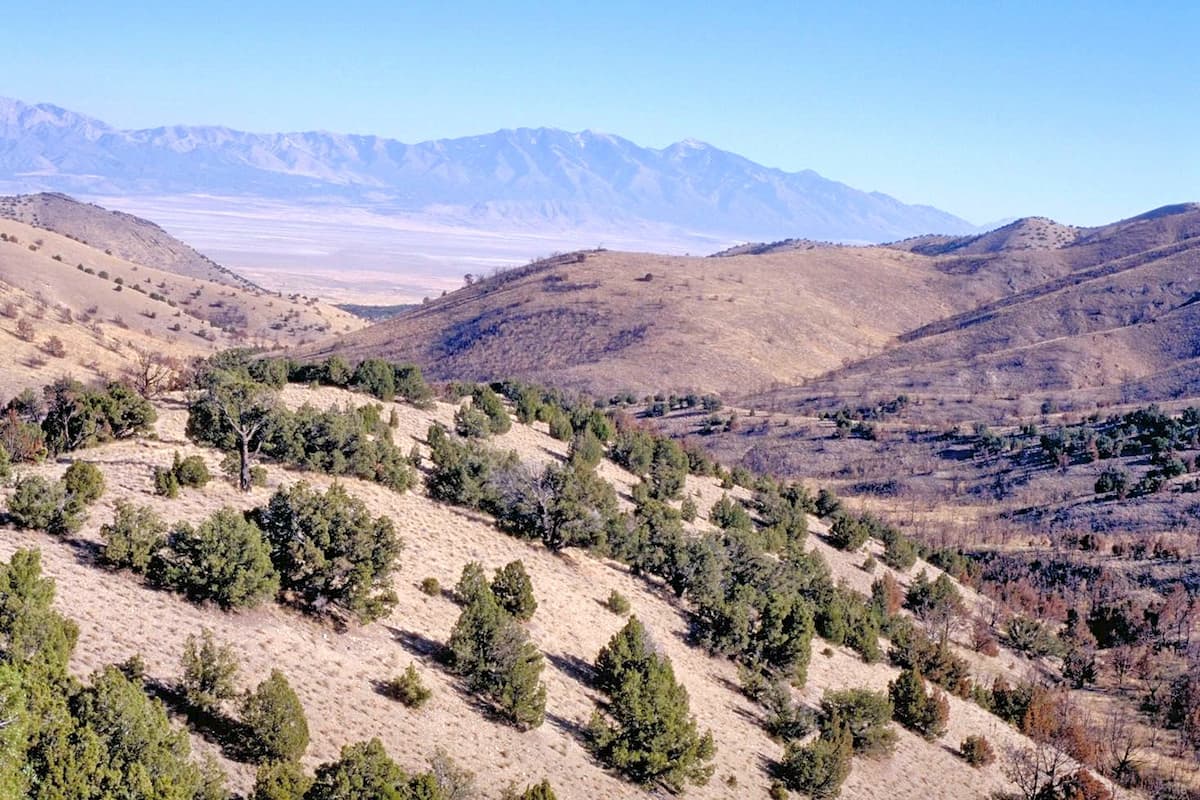 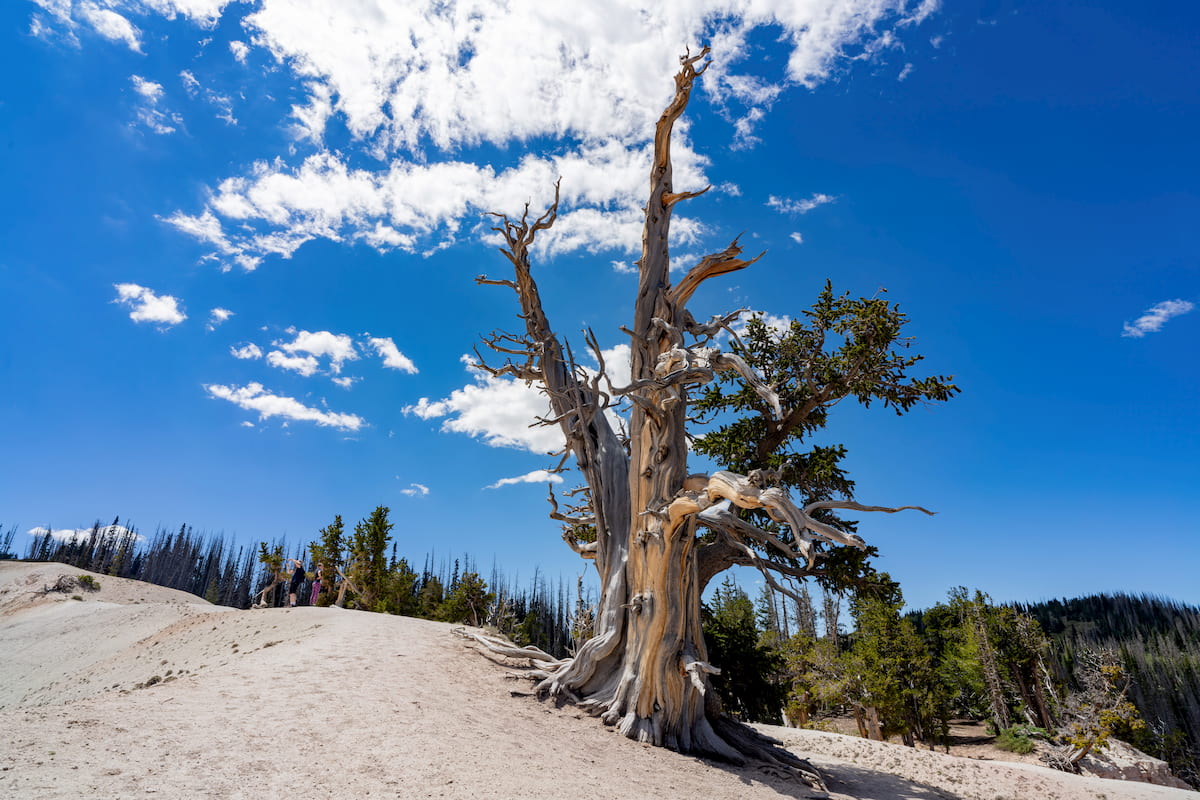 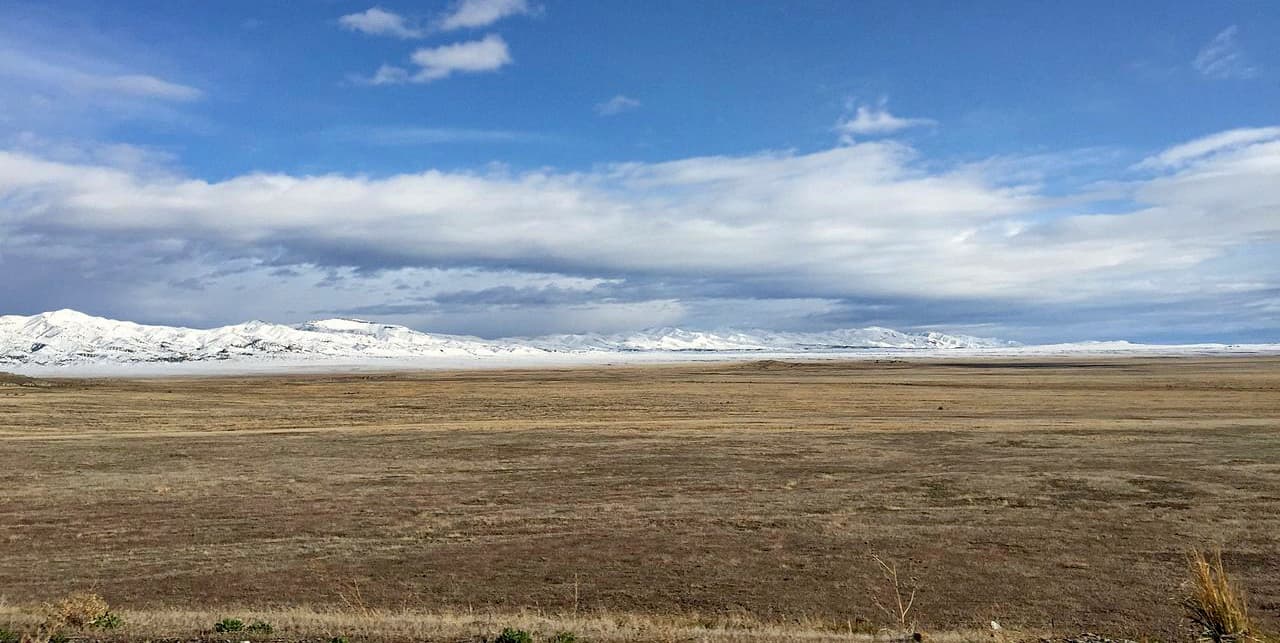 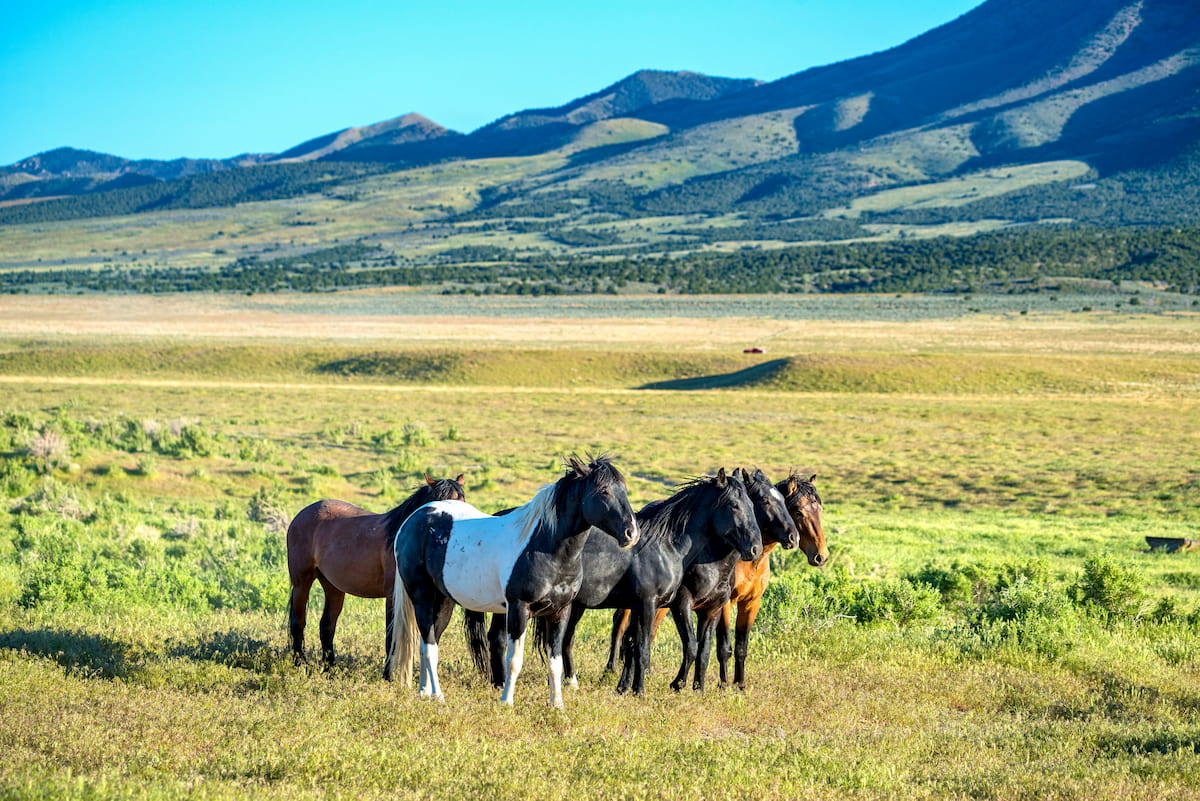