The North River Ranger District is one of the northernmost parts of the sprawling George Washington National Forest in the US states of Virginia and West Virginia. It contains a multitude of mountains, dense forests, and fantastic hiking opportunities. The ranger district is home to 155 named mountains, the highest and most prominent of which is Lead-Off Ridge (4,465 ft/1,361 m). 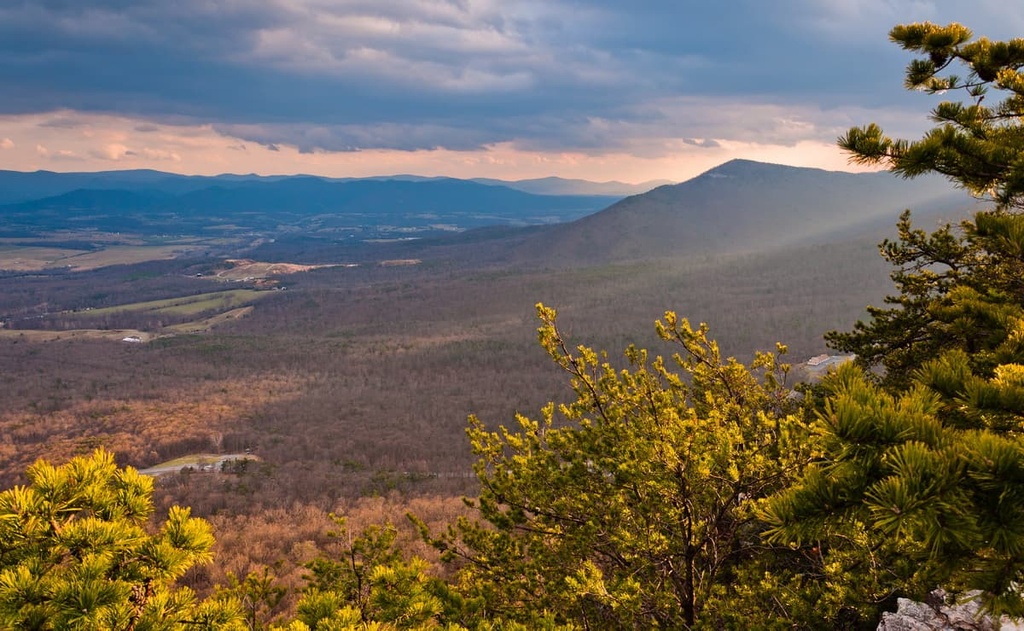 The North River Ranger District is an administrative area of the George Washington National Forest. It is located along the border of the US states of Virginia and West Virginia in the eastern part of the country.

While there are 23 federal wilderness areas within the George Washington and Jefferson National Forests, only one is located in the North River Ranger District: Ramseys Draft Wilderness.

As is the case with the rest of the national forest, all of the peaks within the North River Ranger District are part of the Appalachian Mountains. The Applachians are a massive chain of peaks that stretch from the northern part of the US state of Alabama all the way to the province of Newfoundland and Labrador in Canada.

In particular, most of the peaks within the North River Ranger District are also part of the Appalachian Ridges, which are sometimes called the Ridge-and-Valley Appalachians.

Nevertheless, the Appalachians of today look very different from their earliest ancestors. Nowadays, much of the region is dominated by well-weathered peaks whose rounded summits are a testament to the erosion that the region has experienced over the last few hundred million years.

The ecology of the North River Ranger District is similar to that of the rest of the George Washington National Forest.

In fact, this is one of the most biodiverse regions in the eastern US. The forest as a whole is home to over 2,000 flowering plant and shrub species as well as more than 50 tree species.

As a general rule, the woodlands within the ranger district are Appalachian mixed pine-hardwood and hardwood forests. These forests are dominated by various deciduous trees like yellow birch, beech, sugar maple, and mountain maple. There are also black cherry, tulip, sweet birch, and red oak trees.

Additionally, at the highest elevations in the ranger district, the forests feature various coniferous trees. This includes mostly Fraser fir and red spruce, though some hardwoods are found in these woodlands, too.

In addition to abundant plant life, the North River Ranger District is also home to a wide variety of animal species. There are an estimated 200 species of birds, 78 species of reptiles and amphibians, 100 species of fish and mussels, and 60 species of mammals found in the forest. Out of all of these species, at least 50 are federally listed as threatened or endangered.

The land that is now the North River District of the George Washington National Forest has been home to humans for countless generations. Although precise traditional territorial boundaries are difficult to discern, the George Washington National Forest as a whole is located on the ancestral homelands of the Sapony, Cherokee, Monacan, Tutelo, and Mannahoac tribes, among others.

Throughout the eighteenth century, land that was forcibly taken from Indigenous peoples in the region was given by the British Crown to various settlers, many of whom owned enslaved peoples. The area to the east of what is now the North River District became particularly important as it was the geographic center of what was then the colony of Virginia.

During this time, the settlement of Staunton became a particularly important trading post as it was located so close to the so-called Frontier. This reputation as a trading post helped the city become a strategically important place during the Civil War, too, as it was an important supply and communication hub for the rest of the Confederacy.

There are thousands of miles of trails to enjoy in the George Washington National Forest. Here are some of the most popular hikes within the North River Ranger District:

The Shenandoah Mountain Trail North is one of the best tough hikes in the ranger district. This 7.5 mile (2.7 km) trail traverses some rugged terrain to bring you to the scenic High Knob Fire Tower.

Most of this hike follows a beautiful ridgeline along the border between Virginia and West Virginia. It also offers good access to the equally scenic, yet more rugged Bother Ridge Trail for anyone looking for a longer hike. However, note that the Bother Ridge Trail is frequently used for mountain biking descents, so it’s not ideal for hikers with small children or dogs.

The North Mountain Trail offers a unique chance to see some of the only alpine zone terrain in this part of George Washington National Forest. It leads to the summit of Elliott Knob and it offers expansive views of the entire Shenandoah Valley.

Most hikers begin this 10.4 mile (16.7 km) trek at Hite Hollow Road. The trail itself is a fairly well-worn doubletrack and it continues on to a rugged ridgeline where fantastic vistas abound.

The short and casual Confederate Breastworks Trail is a popular choice for history buffs. It’s approximately 0.5 miles (800 m) long and it leads to the site of an overlook and a Civil War era fortification.

You can begin this hike on US Highway 250 at the Confederate Breastworks Trailhead. The hike itself is family-friendly, though there are other nearby trails if you’re looking to extend your adventure.

Accomodation Options in the National Forest

The North River Ranger District of George Washington National Forest offers a number of accommodation options for people looking to spend the night in the forest. Here are some of the best options to choose from for your next visit:

If you’re looking to spend the night outside without sacrificing some of the amenities of home, staying in a campground might be your best bet. Thankfully, there are four designated campgrounds in the North River Ranger District, including:

Note that all of these campgrounds offer sites on a first come, first served basis. None offer reservations, but there are other campgrounds in the national forest that do. If you want to make a reservation for a reservable campground in another district, go to Receration.gov and search for the campground that you’re interested in.

In general, you are allowed to dispersed camp wherever you want in the George Washington National Forest, so long as you follow a few rules.

First and foremost, you must camp on public land away from designated areas and you must be at least 200 feet (60 m) from any stream or water source. There may be some areas that are specifically designated as off-limits or closed to camping outside of designated areas, but these are not common.

Anyone is welcome to camp in the national forest for up to 21 consecutive days at a time without acquiring a permit or paying a fee. If you are in a wilderness area, you are limited to a maximum group size of 10 people. Additionally, if you are outside of a wilderness area and have a group of more than 75 people, you need a special use permit.

Besides that, all other Leave No Trace principles are in effect. Be sure to pack out any trash or food that you bring. Store your food properly to prevent bears from scavenging through your snacks. Also be sure to follow any local fire regulations or bans that may be in effect during your visit.

Unfortunately, there are no cabins available for rent in the North River Ranger District of George Washington National Forest.

However, there are three cabins available in the Mount Rogers National Recreation Area of nearby Jefferson National Forest. These cabins include the Sunrise Cabin, the Blue Springs Gap Cabin, and the Stony Fork Cabin.

Looking for a place to stay during your next visit to the North River District of George Washington National Forest? Here are some of the best cities and towns to check out:

Situated just to the east of the North River Ranger District on the outskirts of Shenandoah National Park, the town of Luray, Virginia is a community of about 5,000 people.

The town is arguably best known as the home of the Luray Caverns, which is a major cave system that’s open to the public. Although it is not the biggest cave in the world or even the country, it is one of the most highly decorated with natural stalactites and stalagmites. There’s even a lithophone (an instrument made of rocks) in the cavern known as the Great Stalacpipe Organ.

Other notable attractions in the town include its large historic district. Luray is also just a short drive from the Thorton Gap entrance of Skyline Drive in Shenandoah National Park.

The city of Staunton is a community of about 25,000 people located in the heart of Virginia’s Shenandoah Valley. It is perhaps most famous for being the birthplace of President Woodrow Wilson.

Staunton is just a short drive to the east of the North River Ranger District, making it a great place to start your adventures if you’re looking to visit the northern part of the George Washington National Forest. In fact, it’s located just off of US Highway 250, which leads into the heart of the ranger district.

Lille Luray, Staunton is known for its historic buildings. In fact, Staunton is home to about 200 buildings and structures that were designed by Thomas Jasper Collins, an architect during the Victorian era.

The largest city in southwestern Virginia, Roanoke is a metropolitan area that’s home to around 100,000 people. It is the main commercial and cultural center for the region and it is one of the most important cities in central Appalachia.

Roanoke is a transportation hub for the area as it has good road, rail, bus, and air links to the surrounding region. This includes train service on the Amtrak Northeast Regional line which extends as far north as Boston, Massachusetts.

Additionally, Roanoke is home to a large number of museums, theaters, music halls, and arts centers. It also hosts a number of festivals each year, particularly during the summer months. 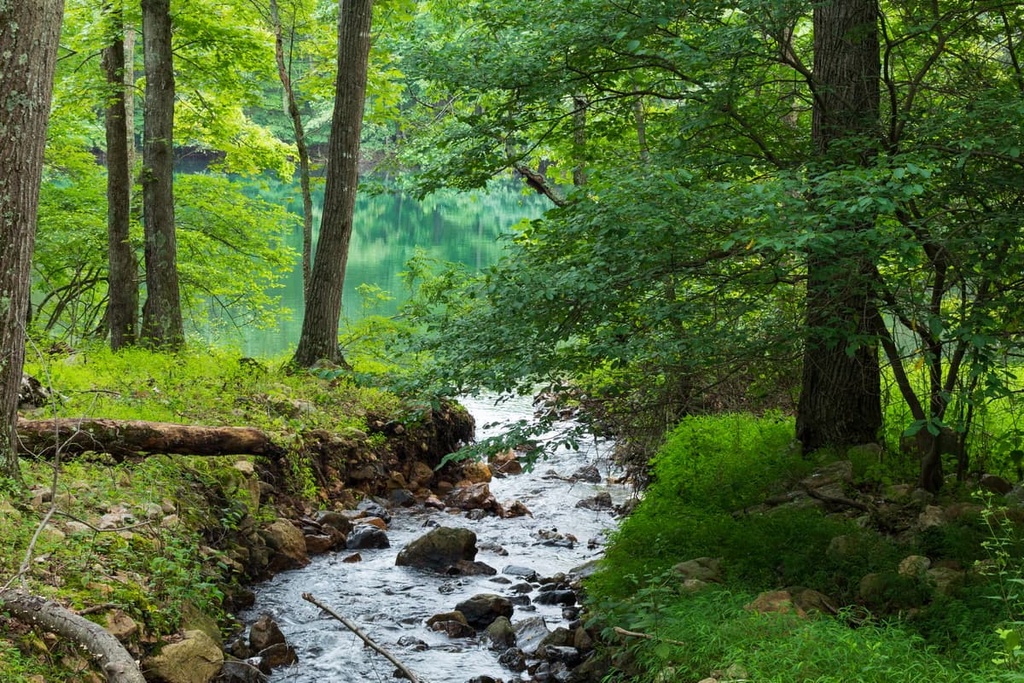 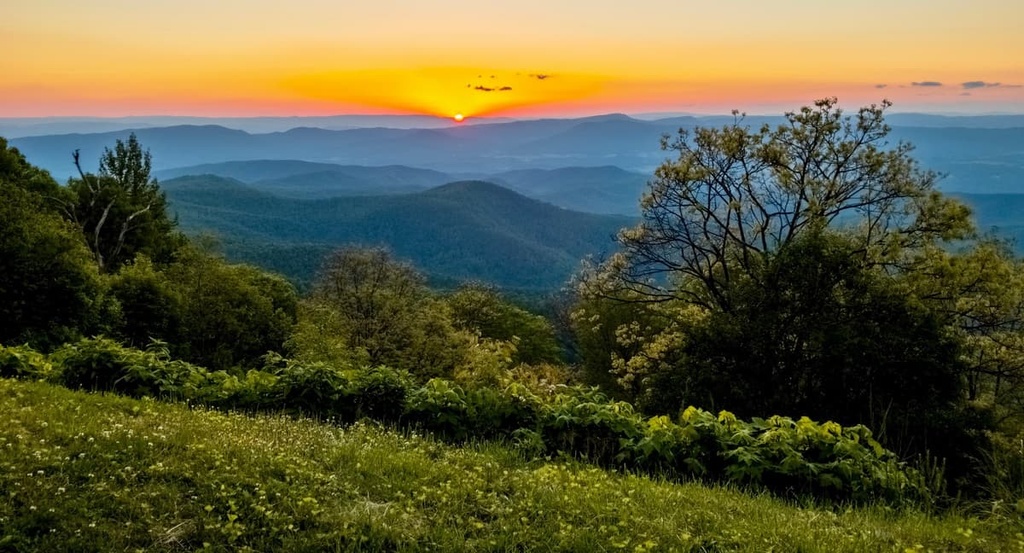 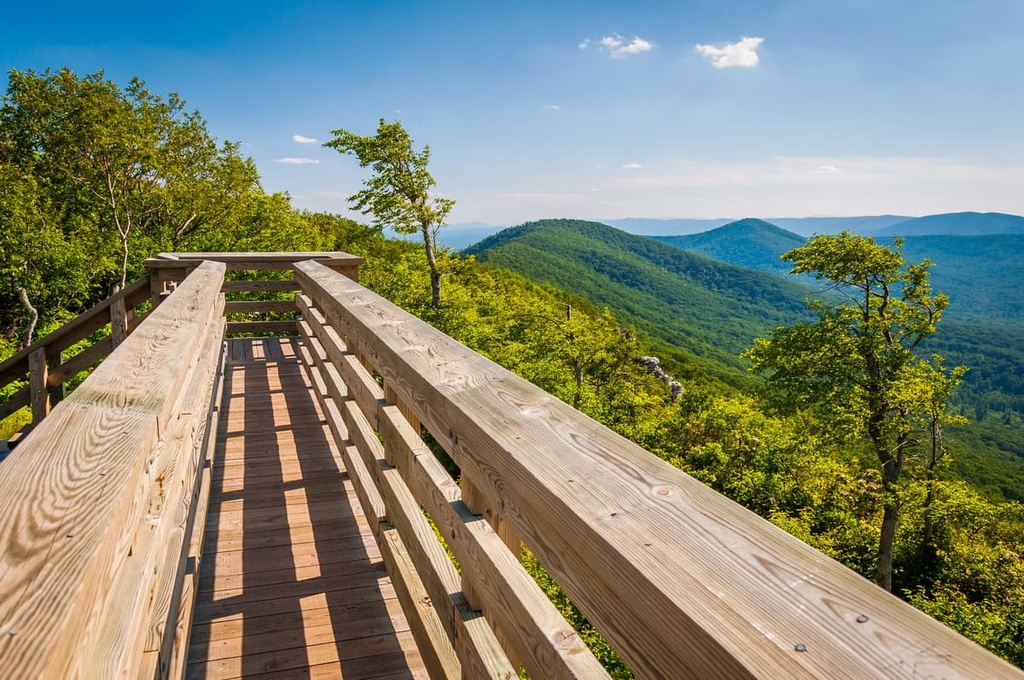 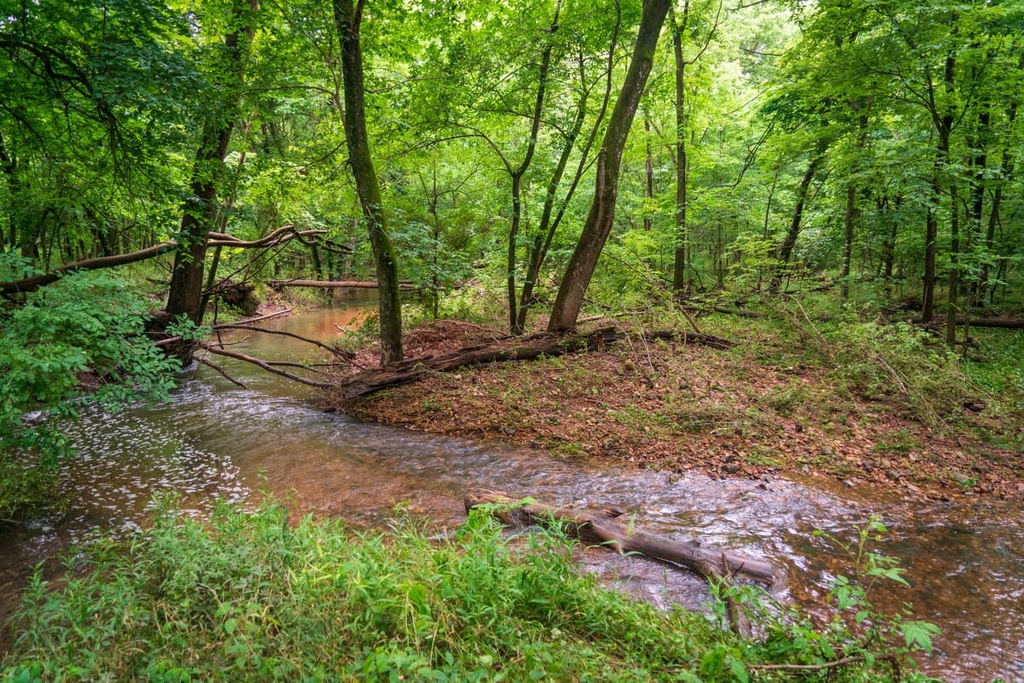 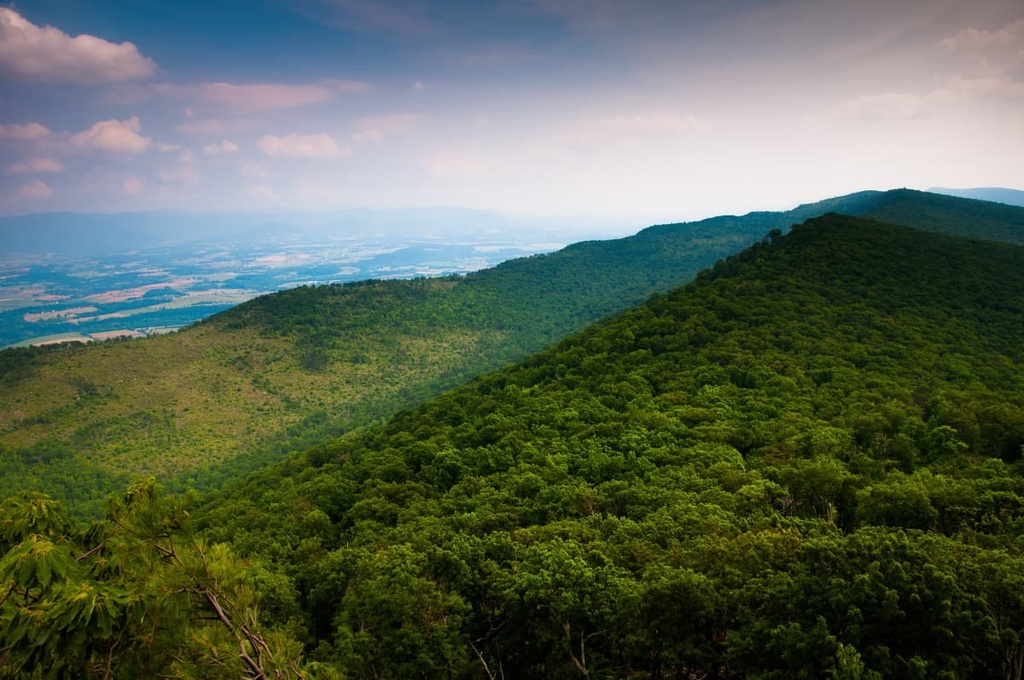 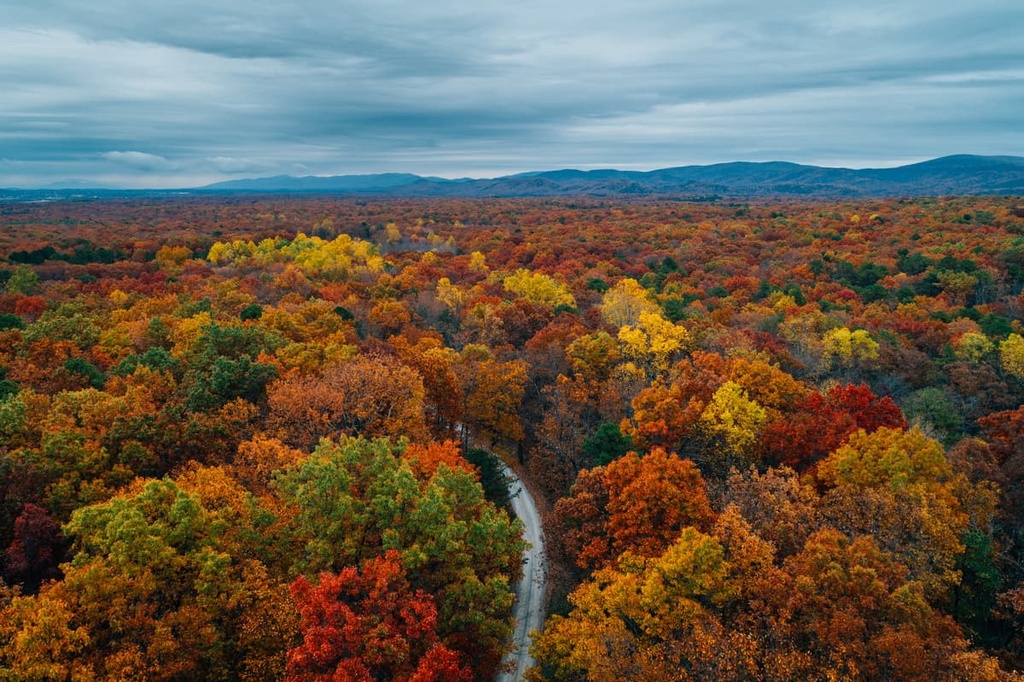 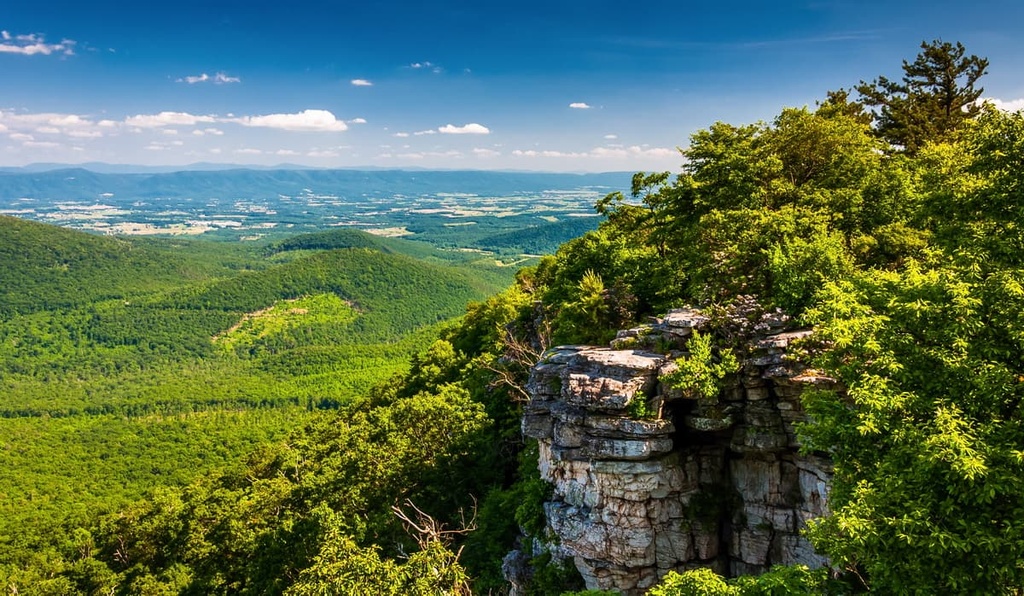