Covering a wide swath of land within the Yukon Territory, the Northwest Territories, British Columbia, and Alaska, the Yukon Intermountain Ranges are a collection of mountain systems in the US and Canada.

However, unlike many other named mountain systems in the region, the Yukon Intermountain Ranges are a loosely associated collection of peaks, which are grouped together more for geographical purposes than for geological ones.

For the most part, the Yukon Intermountain Ranges are bordered by the Peel River (a tributary of the Mackenzie River) to the east, which mostly separates the range from the Mackenzie Mountains. Meanwhile, they are bordered to the south by the Far Northern Rockies of the Canadian Rockies, the British Columbia Interior, the Canadian Coast Mountains, the Northwest Coast Islands, and the Saint Elias Mountains.

Within the Yukon Intermountain Ranges, there are a number of smaller subranges that are recognized in name by varying degrees among locals. These include:

However, the sheer vastness of the Yukon Territory and the difficulty involved in accessing many of the peaks in the Yukon Intermountain Ranges means that a sizable number of peaks and subranges in the area have no English-language name.

That being said, there are a number of parks and recreation areas within the Yukon Intermountain Ranges, such as:

It’s important to note, however, that both the Kluane National Park and Reserve and the Asi Keyi Territorial Park in the southwestern corner of the Yukon are actually home to peaks within the Saint Elias Mountains.

Additionally, the Yukon Intermountain Ranges include a sizable number of different special conservation areas, including:

Although the mountains and subranges within the Yukon Intermountain Ranges are only loosely related to each other from a geological perspective, they are all part of the American Cordillera, which starts just to the north in the Brooks Range of Alaska and then continues to the Andes in the southern tip of Argentina and Chile.

Additionally, much of the pedrock in the region started to form during the Proterozoic, about 1.7 billion years ago. Major rock types in the ranges vary greatly by location, though a wide range of sedimentary rocks, including shales, siltstones, sandstones, and dolomites, as well as the igneous remnants of past volcanic activity can all be seen in the region.

Mountain building in the range is believed to have started some 900 million years ago, though this was mostly limited to regionalized folding events. In more recent years, the region has seen widespread faulting and folding, as well as the accretion of a number of terrains in the western part of the territory.

Moreover, the early Creataceous saw the formation of a number of large batholiths, some of which are rich in precious minerals, such as gold, silver, and copper. These batholiths formed as a result of regional volcanic activity, which continued well into the Miocene, creating a wide range of igneous strata in the region.

Throughout the millennia, the Yukon Intermountain Ranges have also experienced quite a bit of glaciation. These periods of widespread glaciation helped to carve out many of the region’s deep valleys and they also led to the deposition of huge amounts of glacial till.

With the exception of the northernmost reaches of the Yukon Territory is within the treeline of Canada’s boreal forest.

As a result, the majority of the Yukon Intermountain Ranges are dominated by coniferous forests of white spruce and blakc spruce at the low to mid elevations. Meanwhile, some smaller stands of lodgepole pine, tamarack, subalpine fir, quaking aspen, and balsam fir can be found at lower elevations or in the southern part of the territory.

At the highest elevations in the range, the Yukon Intermountain Ranges also contain a sizable amount of alpine tundra where various shrubs and wildflowers grow.

The majority of the region is also the perfect habitat for a number of hearty mammals, including caribou, moose, Dall sheep, mountain goats, mule deer, elk, bison, coyotes, mountain lions, black bears, and grizzly bears. Additionally, polar bears can be found in the extreme northern reaches of the range, though they tend to stay by the Arctic Ocean coastal plain as they are marine mammals.

Within the range’s many rivers and streams, there are also plenty of fish. Most of the fish in the Yukon Territory are salmonids, such as the sockeye, coho, chinook, and chum salmon, though northern pike, and burbot in some areas.

Long before the arrival of settlers and prospectors of European descent, the Yukon was home to a number of different peoples, with evidence of human inhabitation dating back between 25,000 and 40,000 years.

Perhaps the non-Indigenous peoples to venture into what is now the Yukon were Russian traders, though much of their early activity was focused along the coastal parts of what is now Alaska and British Columbia. These traders did, however, establish trading networks with First Nations that extended well into the interior of the Yukon.

By around the 19th century, fur trappers with the Hudson’s Bay Company made their way into what is now the Yukon via various trading posts along the Mackenzie River. In particular, Fort McPherson became an important starting point for journeys into the interior of the region.

One of the first people of European descent to embark on a trans-Yukon journey was John Bell, a Scottish-Canadian who in the 1840s crossed the now-territory and floated the Bell River to the river’s confluence with the Porcupine River before reaching the Yukon River, where Fort Yukon was established.

The rest of the 19th century saw the establishment of a number of forts and fur-trading outposts but the big rush to the Yukon came with the discovery of gold around the Dawson City region in the 1870s and 1880s.

After Jim Mason discovered gold in and around the Klondike River, thousands of prospectors rushed to the Yukon, leading to a stampede of some 100,000 people, many of whom attempted to reach the area by hiking over the treacherous Chilkoot Trail in the late 1800s.

Not long afterward, however, many of the prospectors turned back and the population of the Yukon Territory decreased substantially, reaching a low of around 4,000 people by the early 1920s.

One of the next major events in the range’s history was the creation of the Alaska Highway during World War II, which was primarily established to ensure a land passage between the contiguous US and Alaska through Canada, though it also helped improve access to the rest of the Yukon. While the highway needed to be reconstructed in many sections not long after, it did provide important road access between the rest of Canada and the southern part of the Yukon Intermountain Ranges.

These days, the land in and around the Yukon Intermountain Ranges remains fairly sparsely inhabited. That being said, the Yukon is home to some truly stunning landscapes and the territory’s parks offer excellent opportunities for outdoor recreation.

The Yukon Intermountain Ranges are exceptionally remote and they are difficult to access in many areas. However, there are a number of great outdoor recreation destinations to check out in the range.

Located just north of Dawson City, Tombstone Territorial Park is celebrated for its stunning landscapes and rich biodiversity. The park contains 48 named mountains, the highest and most prominent of which is Mount Frank Rae, though Tombstone Mountain is easily the most recognizable

Tombstone is situated near the Dempster Highway, which is a stretch of road that connects the town of Inuvik to the Klondike Highway. Within the park, visitors have a good chance of spotting caribou, black bears, and grizzly bears, as well as over 150 different bird species.

Situated in the far north of the Yukon, Vuntut National Park is home to some truly majestic landscapes and plentiful wildlife. The park contains 5 named mountains, the highest of which is Ammerman Mountain, and the most prominent of which is Mount Clement.

Due to the park’s remoteness, relatively few people visit it each year. There are no roads leading to the park, which is located just to the south of Ivvavik National Park and to the east of the Arctic National Wildlife Refuge. However, it is possible to fly into or boat into the park from the town of Old Crow, though permits are required to land an aircraft in Vuntut.

Once you’re in the park, adventure is yours to seek out. With no officially established trails or campsites, any trip into Vuntut National Park requires a high level of self-sufficiency, though it is certain to be one to remember.

Home to just around 40,000 people, the Yukon is the second-smallest territory in Canada by population. However, there are still some great places to stay and check out in the region while you’re visiting the Yukon Intermountain Ranges.

The only city in the Yukon, Whitehorse is located in the south-central part of the territory. It has about 25,000 residents, as well as a bustling downtown area with plenty of great cultural and historical attractions.

Whitehorse is the easiest place to get to in the Yukon, thanks to its international airport. It offers regular service to major cities in Canada, as well as scheduled air service to Dawson City, Inuvik, Old Crow, and Mayo within the Yukon. The city is also accessible via the Alaska Highway, which connects it both to Alaska and to British Columbia.

Located in the west-central part of the Yukon, Dawson City is home to about 1,300 residents, which makes it the second largest town in the territory. Dawson City is best known for its importance during the Klondike Gold Rush and its main industries are both mining and tourism.

The town is accessible by air from the Yukon and by road on the Klondike Highway, the Top of the World Highway, and the Taylor Highway.

Haines Junction is a village of about 600 people located in the southwestern part of the Yukon. Although the town is fairly small, it is a transportation hub for the region due to its location at the junction of the Alaska Highway and the Haines Highway.

It is also situated just outside the Kluane National Park and Reserve, so it’s a good starting point for general adventures in the area. 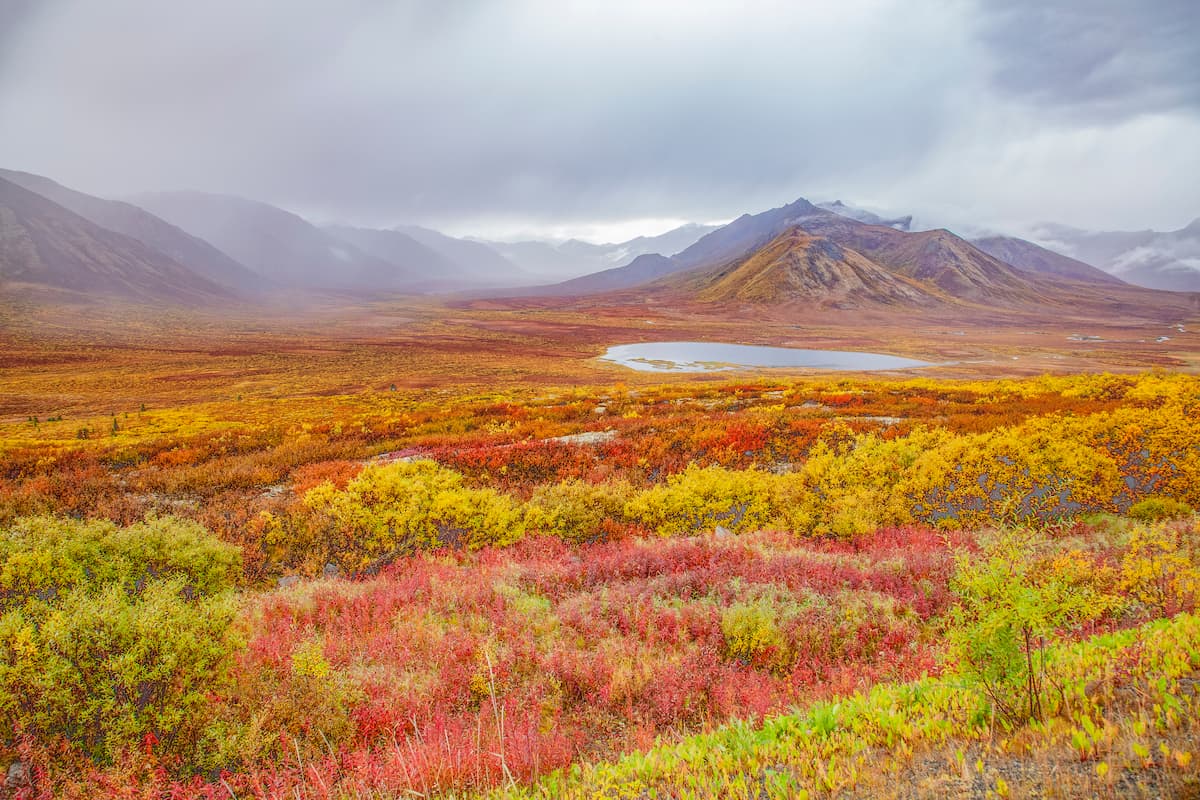 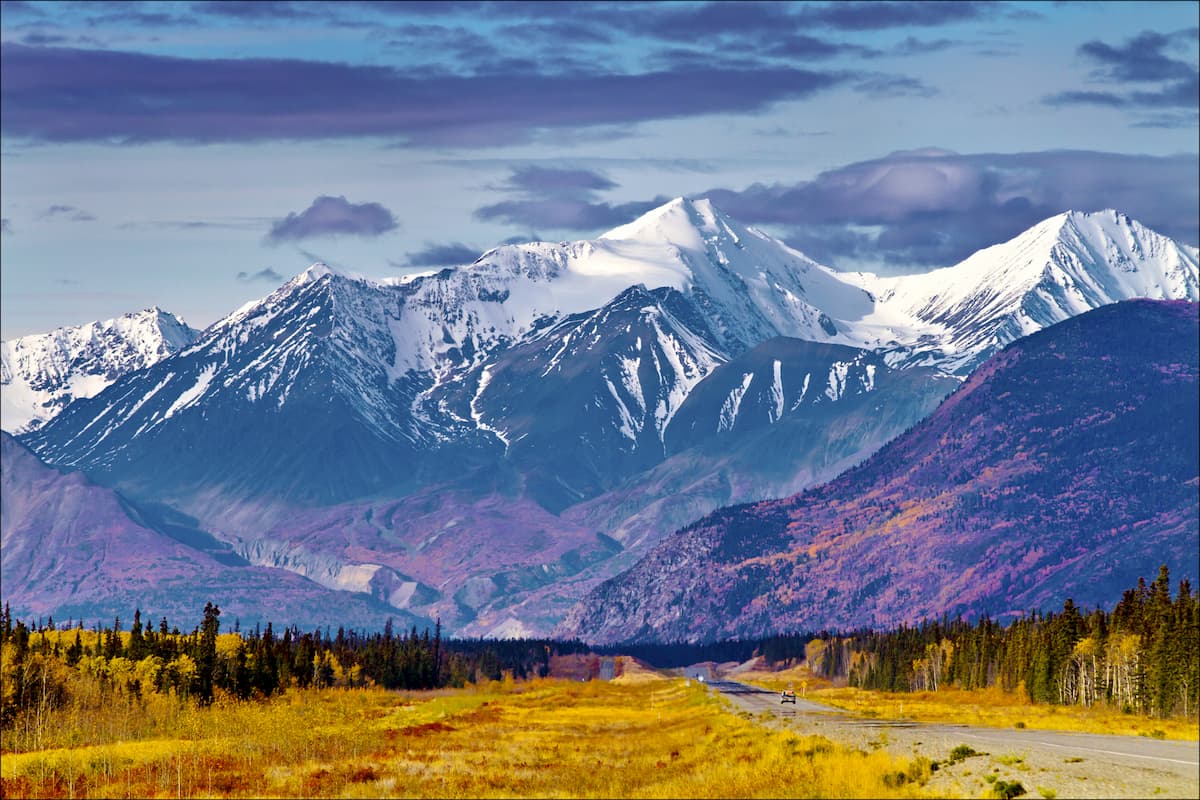 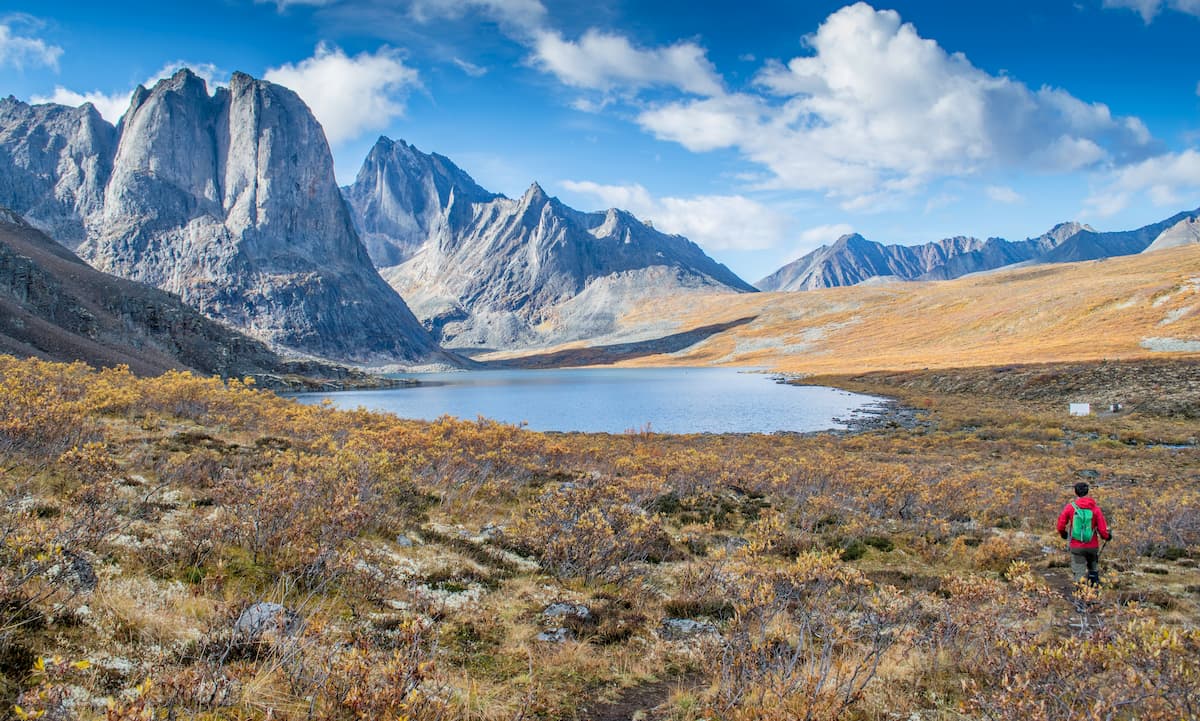 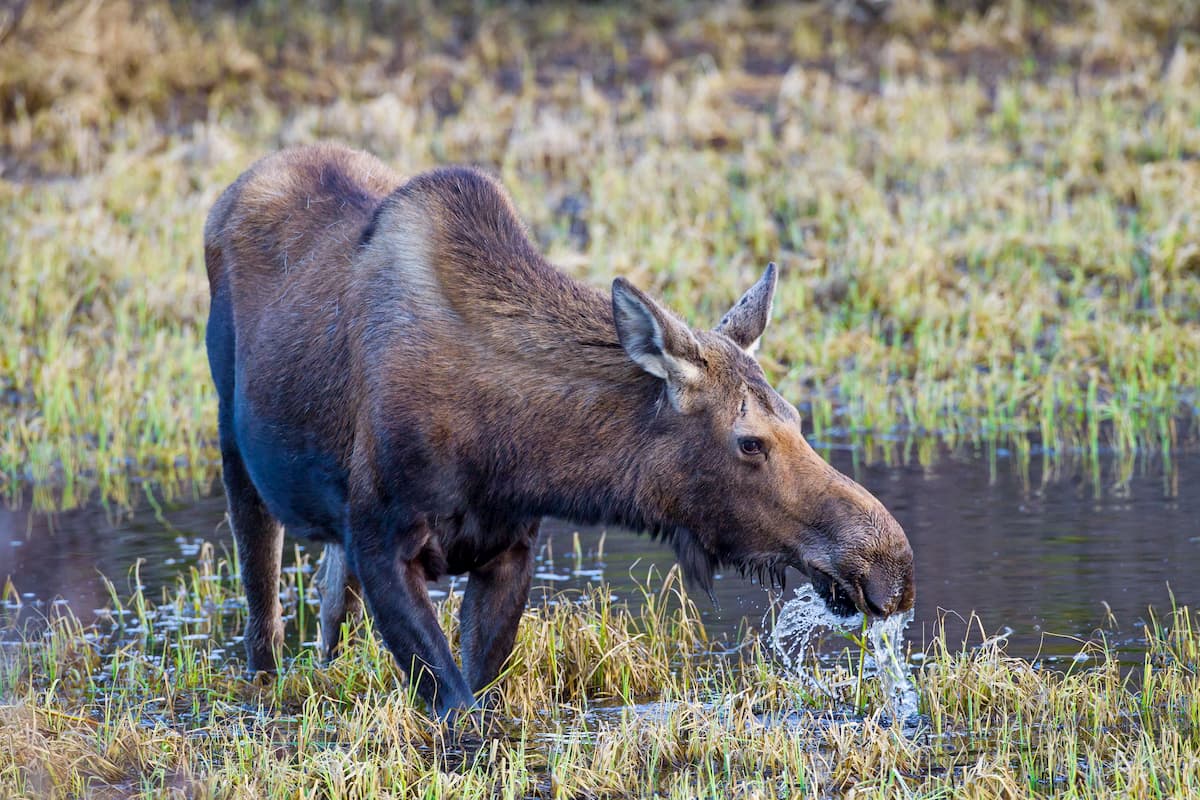 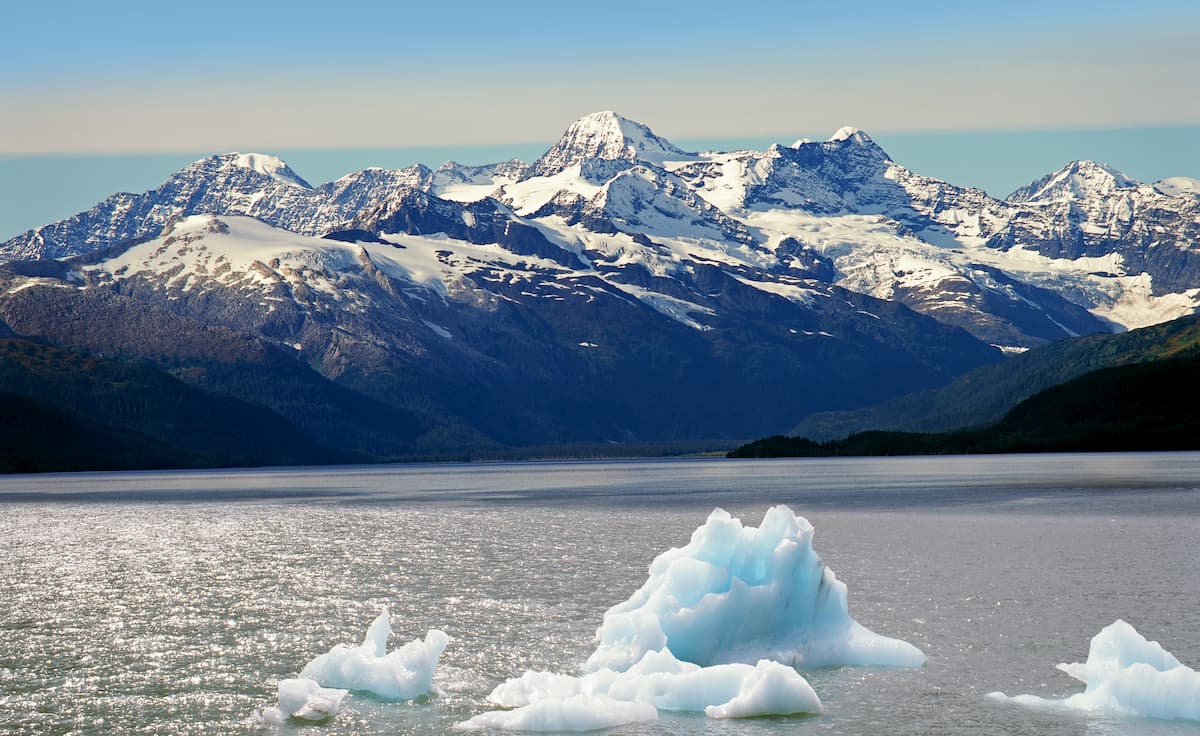